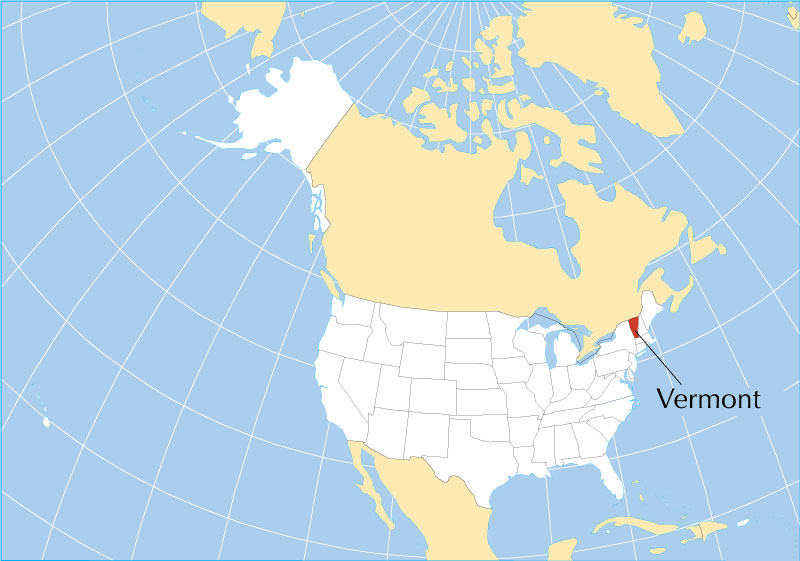 Where in the United States is Vermont? Location map of the State of Vermont in the US.

Vermont is one of the six states in the region known as New England. The State of Vermont is situated in the eastern US mainland. It borders Canada (Québec province) to the north.


New England was the site of early European settlement. The area of Vermont became part of the original territory of the United States and was included in the Charter of New England in 1620. The region was later included in grants creating New York in 1664 and 1674. On 18 January 1777, Vermont declared itself an independent republic. It was the first state in North America to abolish slavery.
On 18 February 1791, Vermont joined the Union as its 14th state. 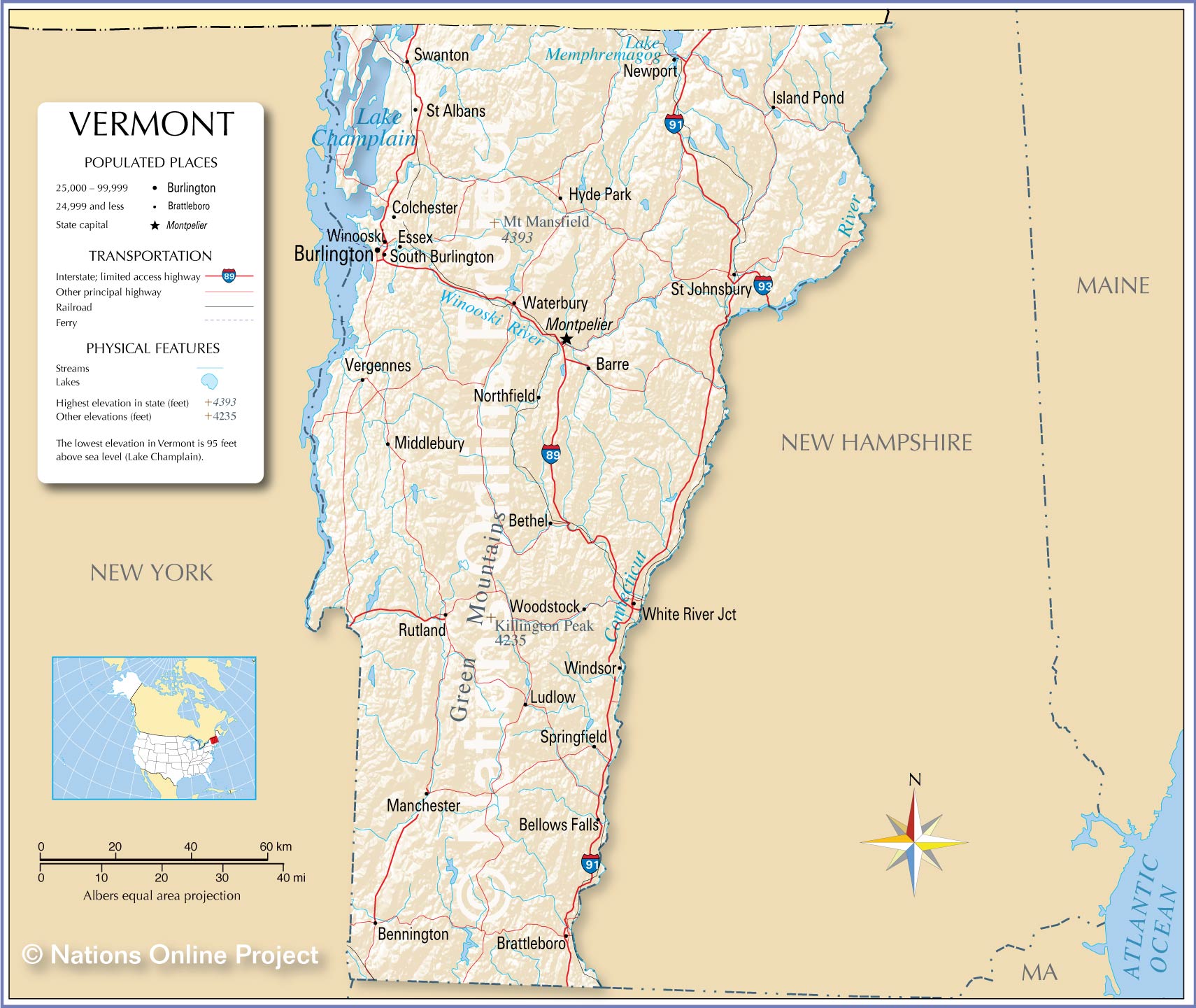 The detailed map shows the US state of Vermont with boundaries, the location of the state capital Montpelier, major cities and populated places, rivers and lakes, interstate highways, principal highways, and railroads. 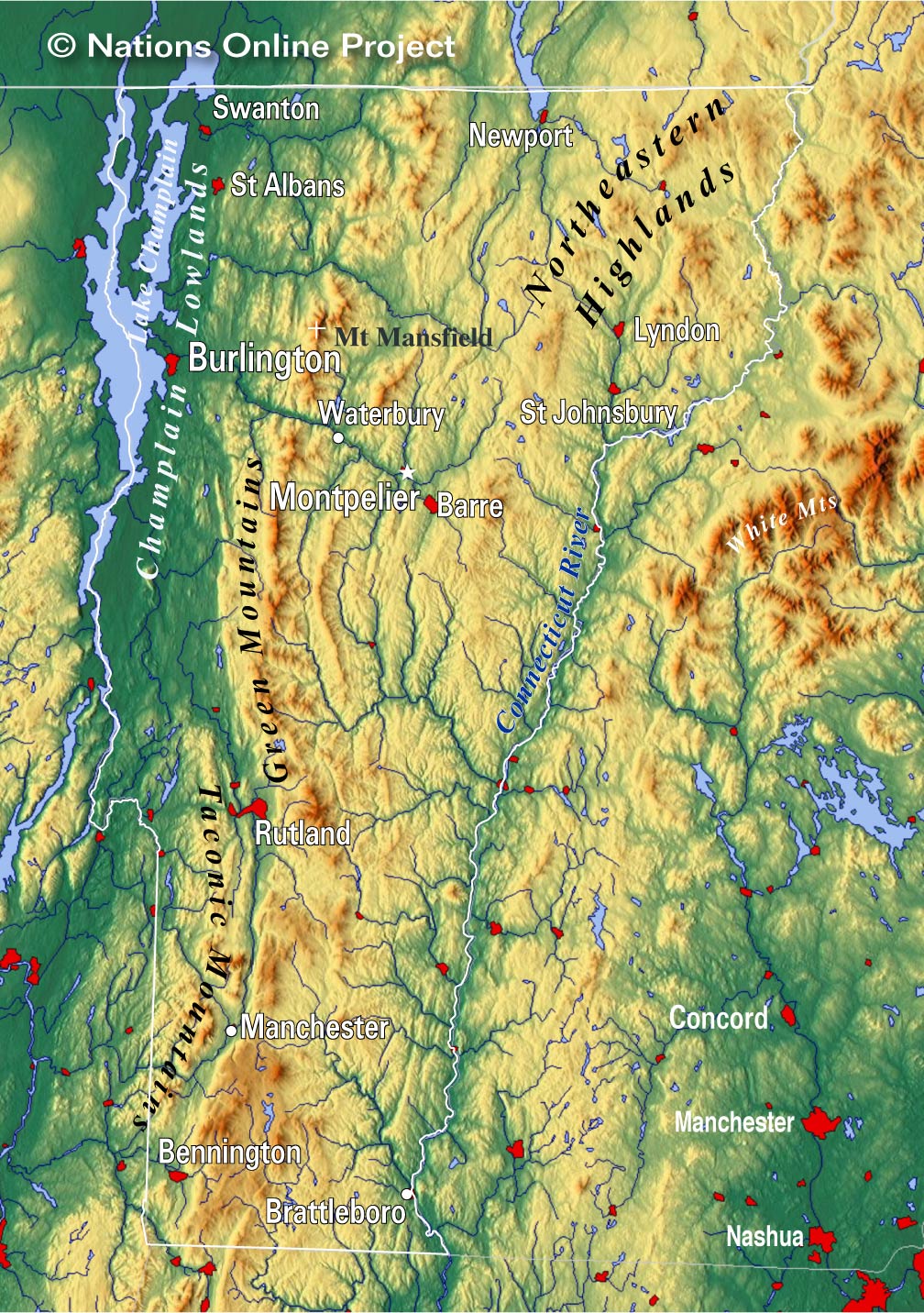 
Vermont occupies an area of 24,905 km² (9,616 sq mi) [2], making it the 45th-largest state, compared it is about one quarter the size of South Korea or Iceland. Compared with other US states, Vermont is about the size of New Jersey, but it would fit into Texas 28 times.

Vermont is divided into 14 counties.

As mentioned above, the region was the site of early European settlement. French colonists were the earliest European immigrants to the area.

Colonization is based on natural features, like fertile soil, and watercourses, which provide access to transportation during the settlement period. English settlers, migrating from Boston and central Massachusetts, were using numerous river corridors, especially the Connecticut River, to access the fertile southeastern lands in Vermont.[3]

Mountains
Vermont's hilly to mountainous landscape is quite forested, giving the state its nickname the Green Mountain State.

The highlight of Vermont's landscape is the Green Mountains, the 310 km (190 mi) long mountain range runs along the western edge of the state in a north/south direction; they are part of the Appalachians.

The Taconic Mountains are also part of the Appalachian Mountains. The New England range includes some well-known summits such as Mount Equinox in Vermont and Mount Greylock, the highest point in Massachusetts.

The Northeast Highlands, a rough, wild region known as the "Northeast Kingdom," is a sparsely populated area, located almost entirely within the borders of Essex County. 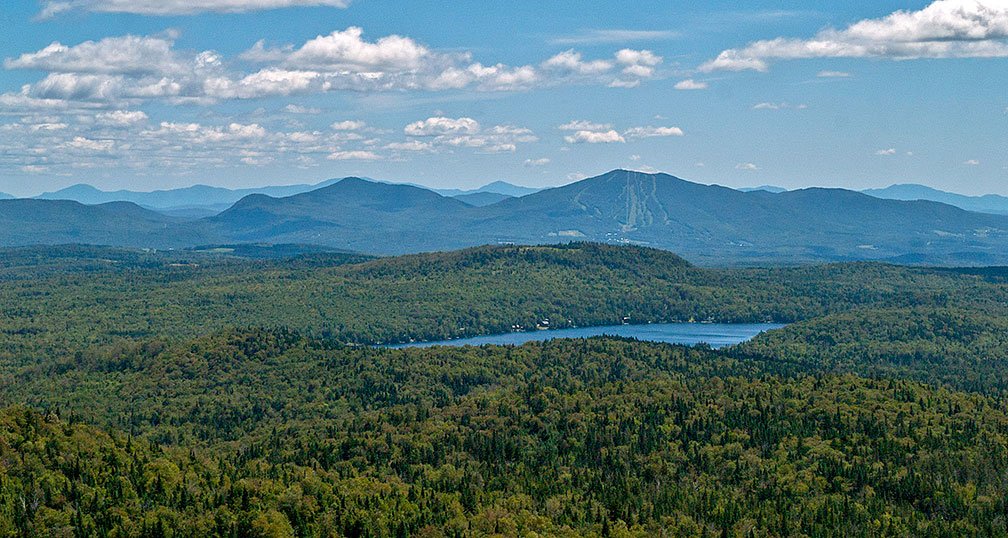 Rivers
Vermont is a state with many small rivers and streams. The Connecticut River marks the border with New Hampshire and drains the south. The Winooski River (formerly the Onion River) is a tributary of Lake Champlain.

Lakes
Lake Champlain is a large freshwater lake in North America with a surface area of 1,270 km² (490 sq mi), shared between the US states of New York and Vermont and Canada's Quebec province. The lake and its islands are a popular tourist destination.
Lake Memphremagog is a freshwater glacial lake shared between Vermont and Canada's Quebec province. 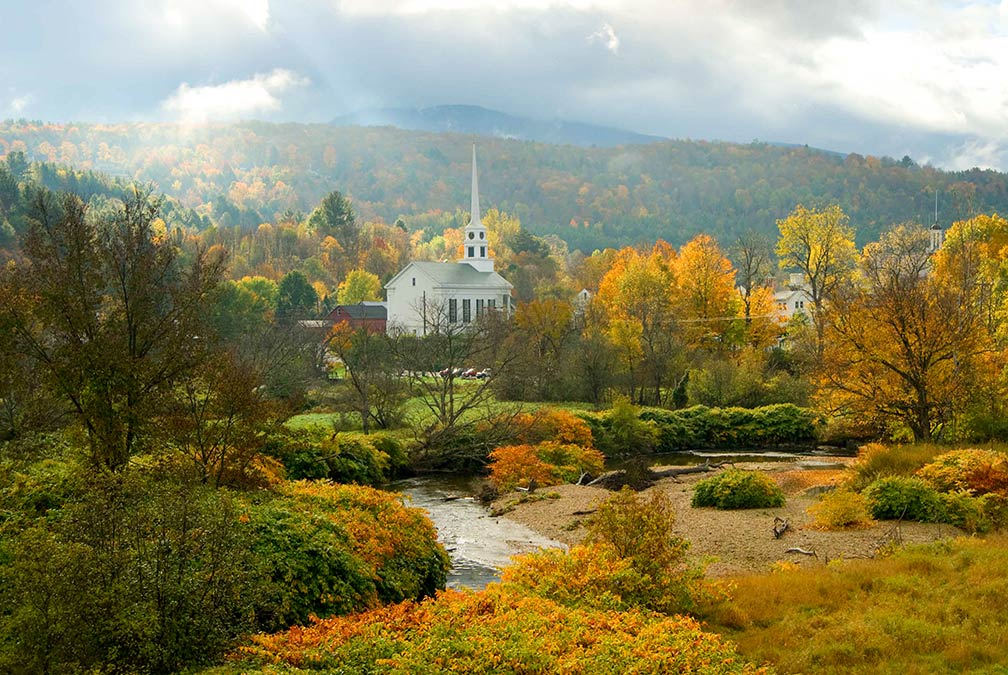 Patches of sunlight and threatening clouds move across the town of Stowe, Vermont.
Image: ©  Ryan Taylor


Busiest and only international airport in the state is Burlington International Airport (IATA code: BTV).

Cities and Towns in Vermont 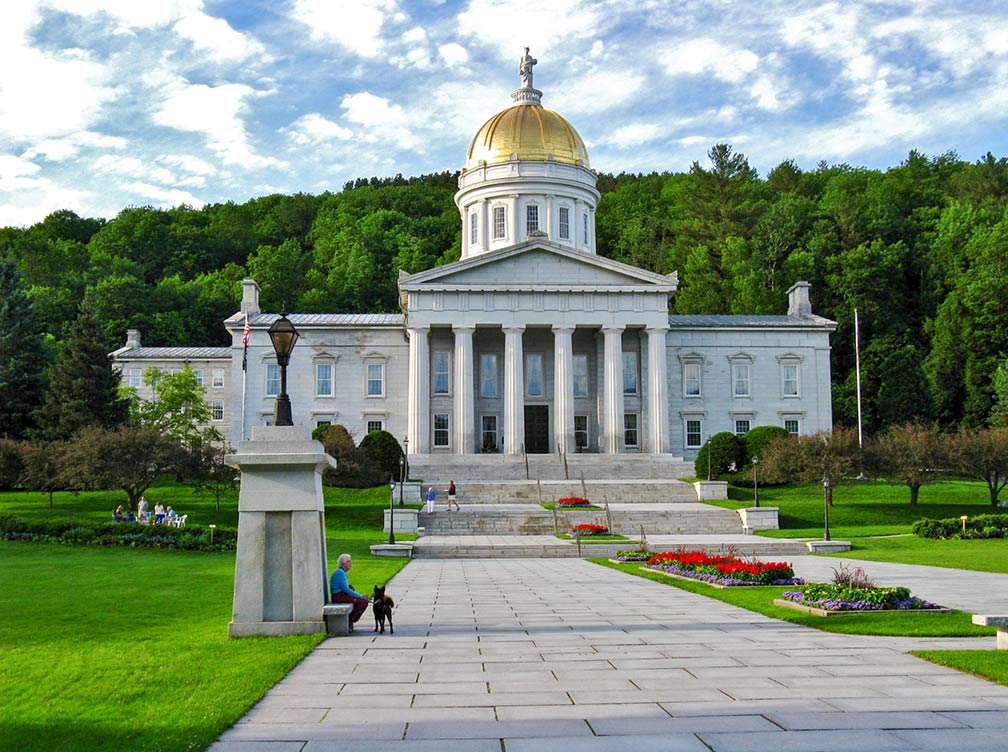 Vermont State House in Montpelier. The state capitol is the seat of the Vermont General Assembly.
Image: Jasperdo


The map shows the location of following cities and towns in Vermont: Largest cities in Vermont with a population of more than 10,000:


Other cities and towns in Vermont:

More about Vermont and the US

Searchable Map and Satellite view of the states' capital Montpelier