Satellite View and Map of the City of Oklahoma City, Oklahoma

The satellite view shows Oklahoma City, most populous city, and the capital of Oklahoma, a landlocked state in the West South Central Region of the

United States. The city, which is also the county seat of Oklahoma County, is situated in the Great Plains region along the North Canadian River in the center of the state, about 200 mi (330 km) north of Dallas. 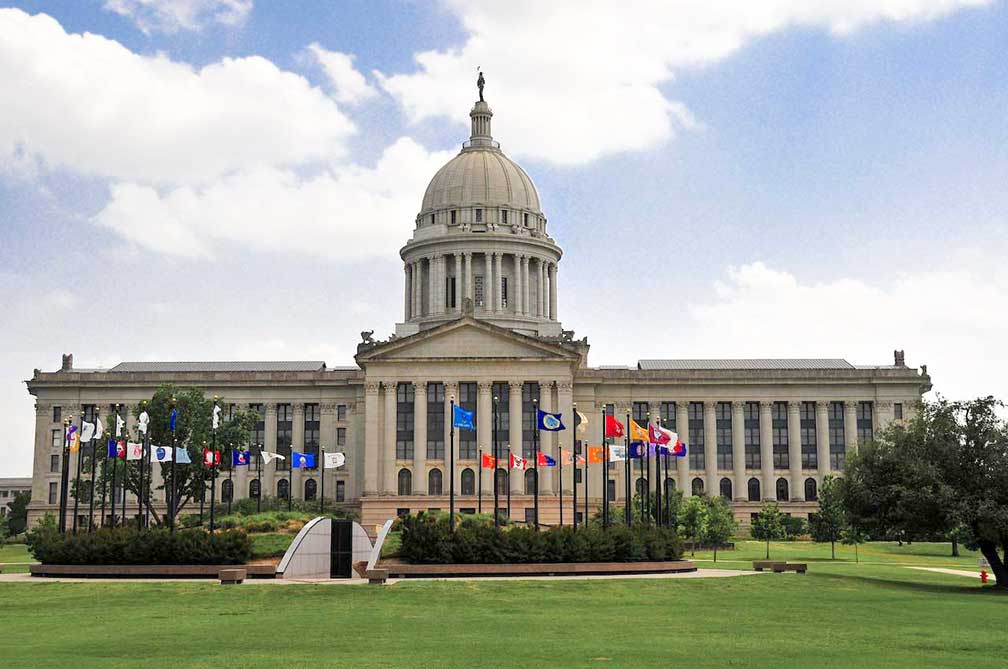 
The "Unassigned Lands" were in the center of the territory ceded to the United States by the Creek (Muskogee) and Seminole Indians following the Civil War.

Those Lands were considered some of the best unoccupied public land in the United States. On 22nd April 1889, an estimated 50,000 would-be settlers lined up for their piece of the available two million acres (8,000 km²). By the end of the day, both Oklahoma City and Guthrie had established settlements of around 10,000 people.

This event has gone down in history as 'The Land Run of 1889'. In 1890 the formerly unorganized territory became Oklahoma Territory and Guthrie its capital.
On the 16th November 1907, Oklahoma became the 46th state in the Union, and Oklahoma City became the state capital in 1910.

The city is home to the University of Oklahoma (www.ou.edu) with several institutions of higher learning; the public research university was founded in 1890, 17 years before Oklahoma became a state. The Oklahoma City University (www.okcu.edu), a private university historically affiliated with the United Methodist Church, is located in the uptown district of the city.


What distinguishes Oklahoma City from other American cities?
1. The state capitol complex is the only state capitol grounds in the United States with active oil rigs.
2. Oklahoma's capital has one of the largest livestock markets in the world, known as the National Stockyard Exchange (www.onsy.com). 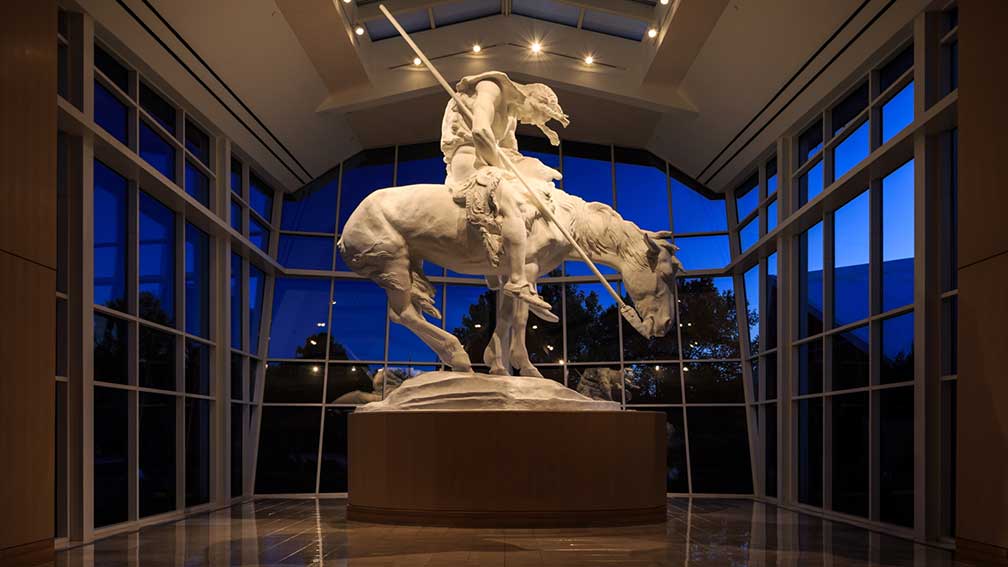 Science Museum Oklahoma (www.sciencemuseumok.org), is a science museum which includes the Kirkpatrick Planetarium.

Oklahoma Railway Museum (www.oklahomarailwaymuseum.org), the museum is made possible by railroad enthusiasts. The facility also offers train rides; it operates four diesel locomotives and has a full assortment of railcars.

Museum of Osteology (skeletonmuseum.com) the private museum is devoted to the study of bones and skeletons (osteology). Over 350 skeletons from animal species from all over the world are on display.

The American Banjo Museum (www.americanbanjomuseum.com) has the world's most extensive collection of banjos.


Visual arts:
Oklahoma City Museum of Art (www.okcmoa.com) OKCMOA is a modern art museum; it has one of the most comprehensive collections of Dale Chihuly glass in the world. 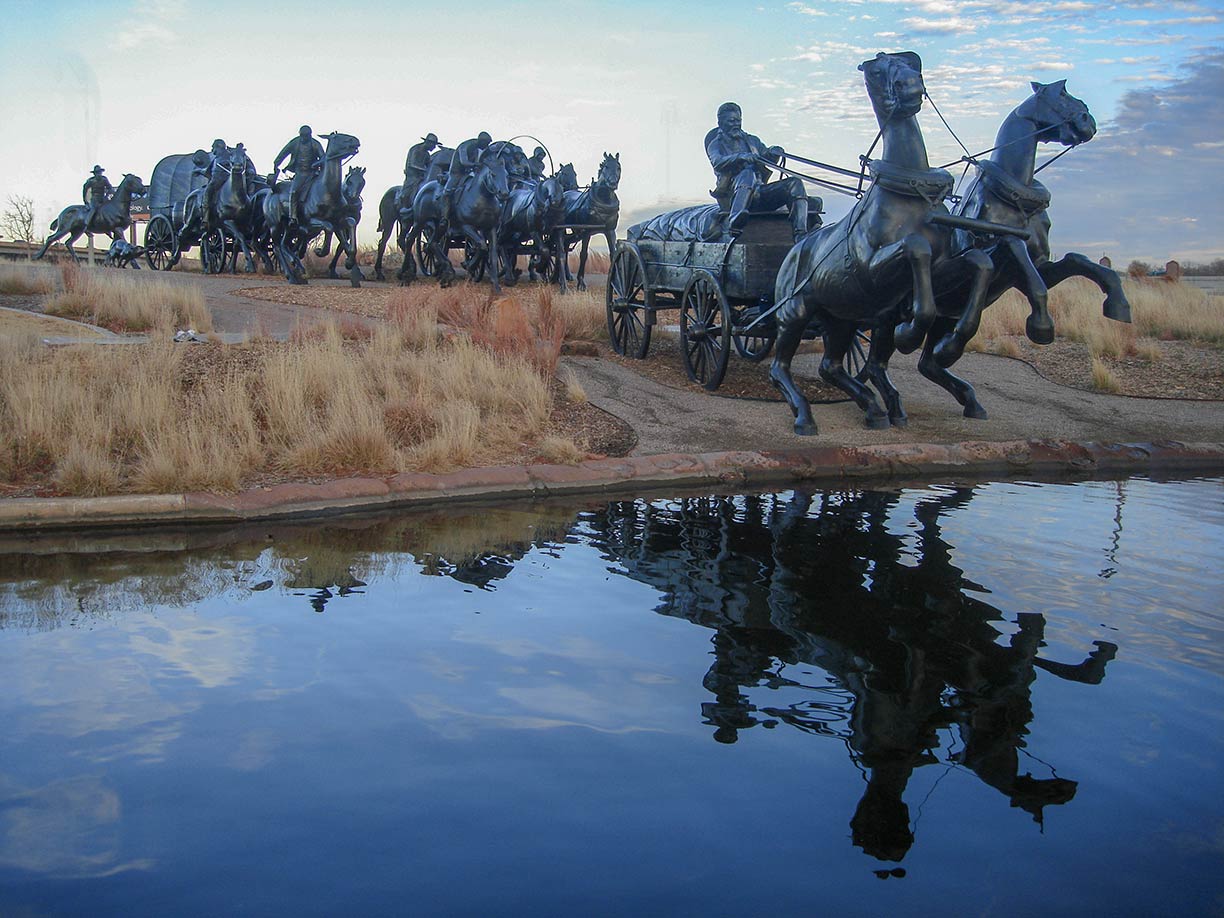 Memorials:
Oklahoma City National Memorial and Museum (oklahomacitynationalmemorial.org), the memorial honors the victims, survivors, and rescuers of the Oklahoma City bombing on 19 April 1995.

Centennial Land Run Monument is a monument of 45 'heroic' figures, life-size bronze sculptures of horses, wagons, soldiers, and cowboys that commemorates the land grab of the unassigned land in Oklahoma territory during the Land Run of 1889. 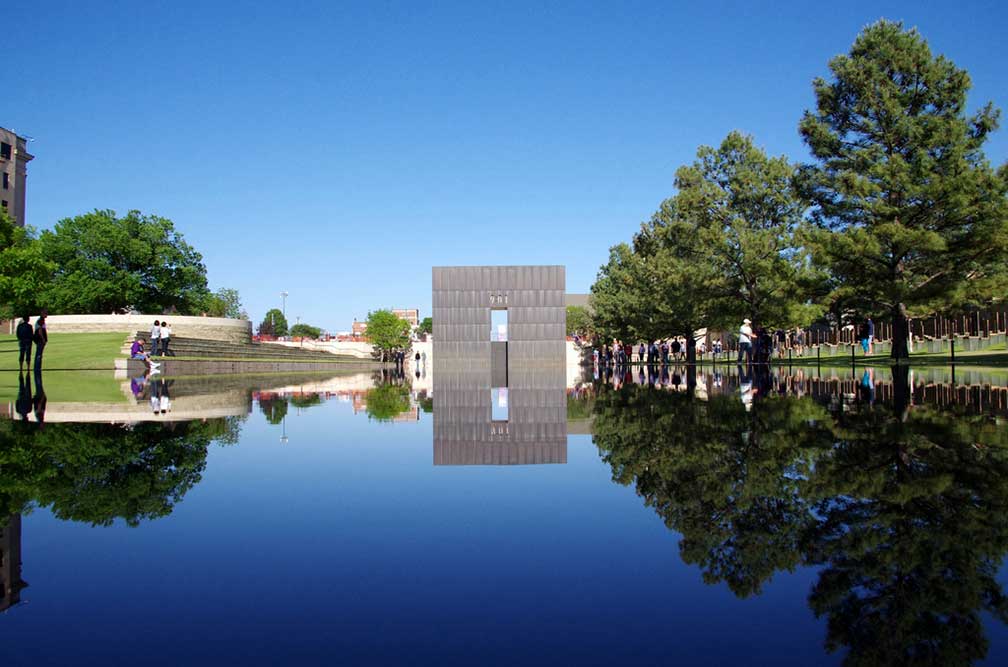 
Oklahoma City Zoo (www.okczoo.org) the city's zoo with a botanical garden is located in the Adventure District.

Will Rogers Park is a historic city park with a formal rose garden, walkways, an arboretum, and an education center which provides hands-on gardening and horticulture classes.

Lakes:
Lake Hefner is a reservoir built in 1947 to expand the water supply for the city. The lake is now a recreation area, especially for sailing and bird watching.


The page shows a city map of Oklahoma City with expressways, main roads, and streets, zoom out to find the location of Will Rogers World Airport (flyokc.com - IATA code: OKC) six mi (10 km) southwest of the central business district.

Just zoom in to see Oklahoma State Capitol, a National Historic Landmark and the seat of the government of Oklahoma, and the legislature and executive branch offices.

More about Oklahoma and the US