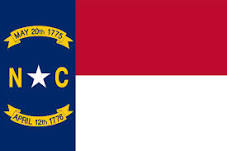 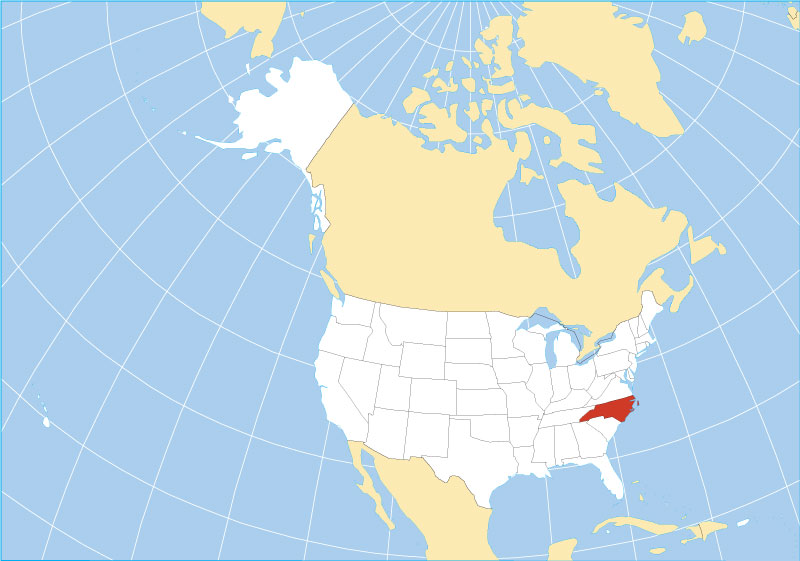 The US state of North Carolina is located in the center of the eastern United States and has a coastline on the Atlantic Ocean to the east.

The state borders Virginia in the north, South Carolina in the south, Georgia in the southwest and Tennessee in the west. The state's nickname is "Tar Heel State."


Short History
First settled by the English in the late 1600s. In 1584 Queen Elizabeth I issued a charter to Sir Walter Raleigh to establish a colony in America.

The region of what is now North Carolina was part of the original territory of the United States.

Both North Carolina and South Carolina were included in the charter that established Carolina in 1663. The two areas separated in 1712, a separation that was finalized when the Carolina Colony was dissolved in 1729. On 21 November 1789, North Carolina ratified the Constitution; it was the 12th of the original 13 states to join the Union.

The detailed map shows the US state of North Carolina with boundaries, the location of the state capital Raleigh, major cities and populated places, rivers and lakes, interstate highways, principal highways, railroads and major airports. 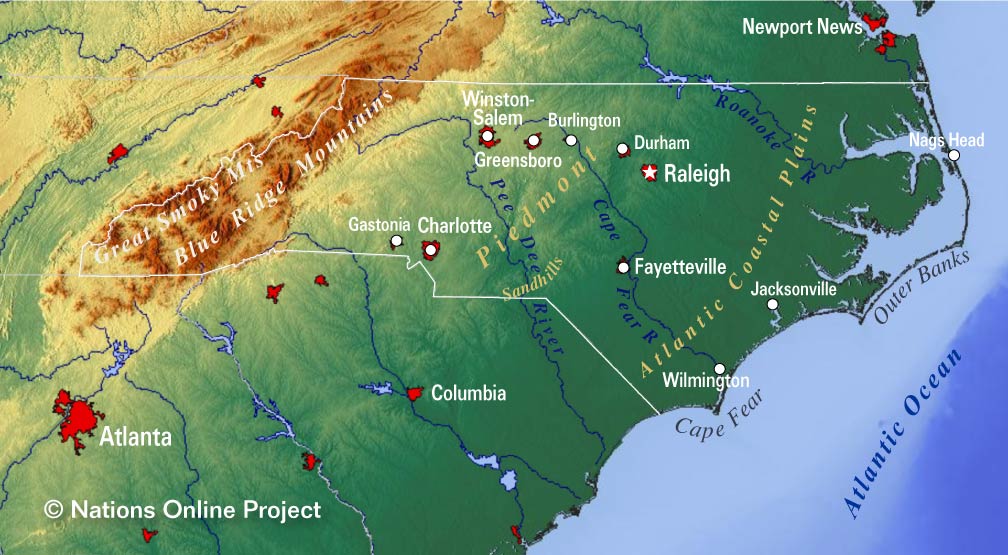 North Carolina is divided into 100 counties.

Climate
Most of the state features a humid subtropical climate. 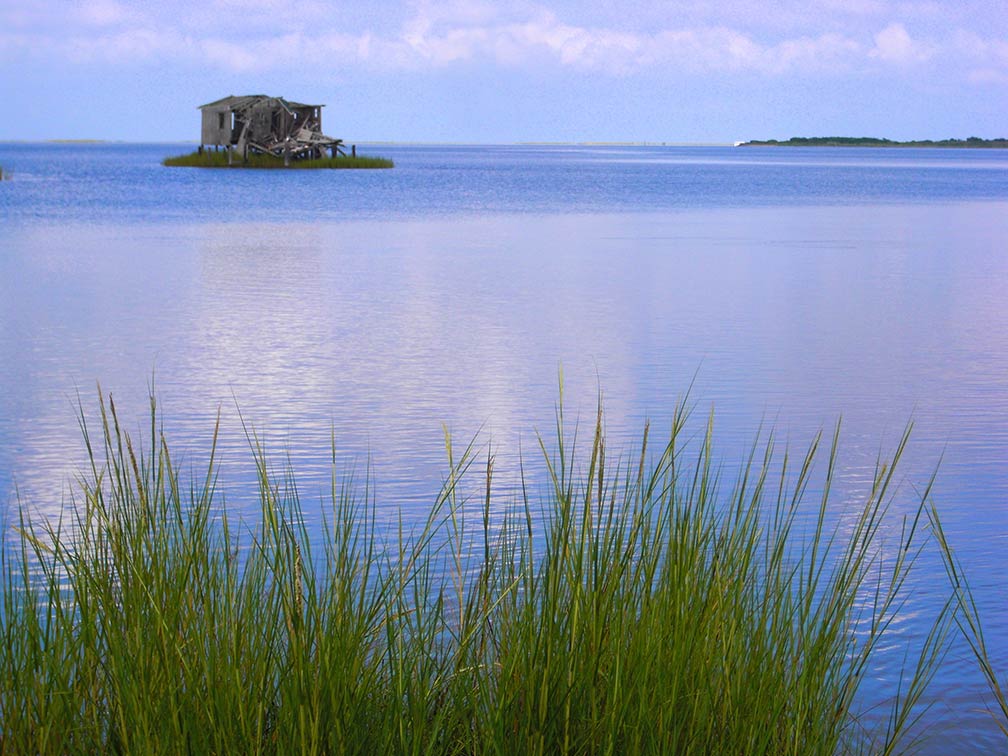 The sandy islands of the Outer Banks, a 300 km long string of barrier islands and spits off the coast of North Carolina, separating the Atlantic Ocean from the brackish inlets and sounds of the coastal region.

North Carolina has its share of the Atlantic Coastal Plain; the Tidewater region covers roughly 40% of the state's area.

To the west of the Piedmont rise the densely forested mountain chains of the Blue Ridge Mountains and the Great Smoky Mountains, subranges of the larger Appalachians.

The highest elevation in the state is Mount Mitchell at 2,037 m (6,684 ft). The highest mountain in the Eastern United States is located in the Black Mountains, a subrange of the Blue Ridge Mountains. 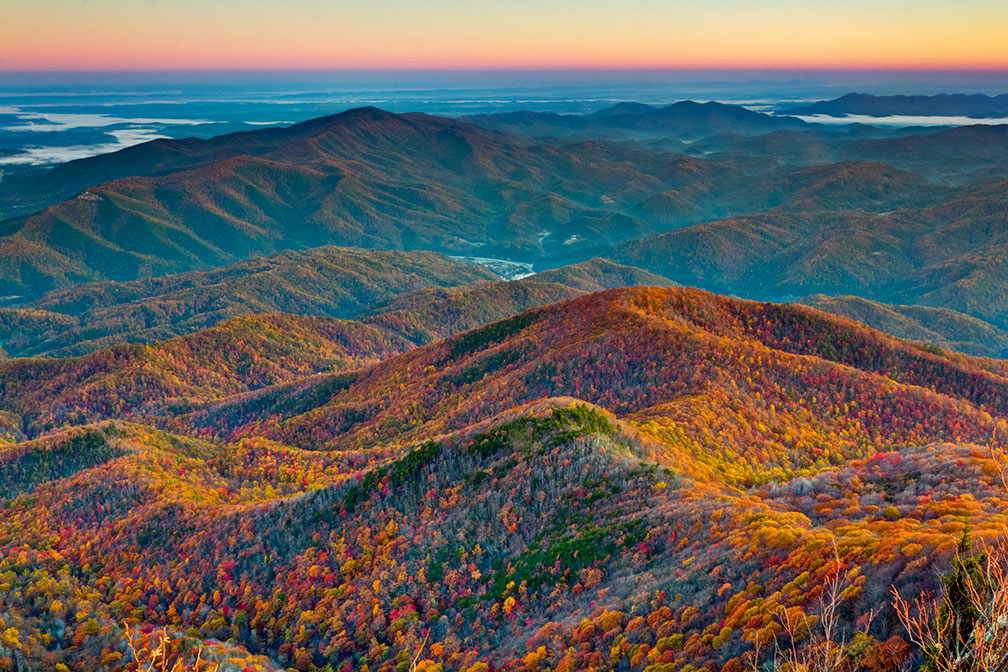 is a major North American refuge of temperate zone flora and fauna that survived the Pleistocene glaciations.

The park covers an area of over more than 200,000 ha, centered on the ridgeline of the Great Smoky Mountains, a subrange of the Appalachian mountain chain.

The park is home to the largest remains of an Arctic-Tertiary Geoflora that once covered the entire Northern Hemisphere. The park's landscape gives a sense of what the late Pleistocene (Ice Age) flora looked like before recent human impacts.

The main park entrance in North Carolina is at Cherokee and in Tennessee at Gatlinburg. 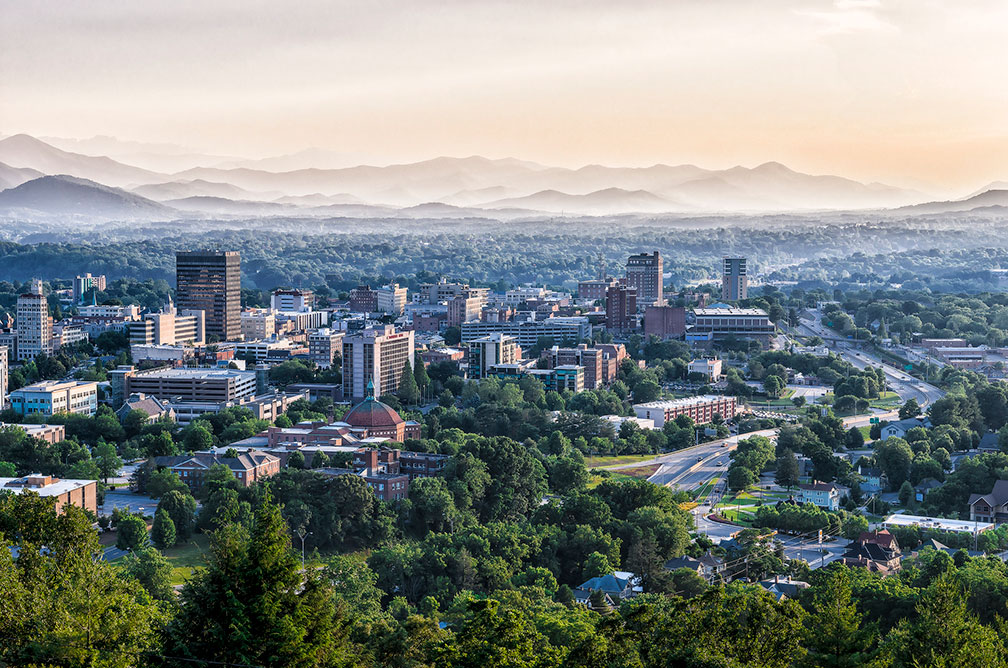 The city of Asheville in North Carolina with the Blue Ridge Mountains in the background. Asheville is home to the United States National Climatic Data Center (NCDC), the world's largest active archive of weather data.
Image: Ken Lane


North Carolina is one of the ten most populous states in the country. It has a population of 10.5 million people (est. in 2019); [2] the capital is Raleigh, the largest city is Charlotte, the largest urban area in the state is Charlotte metropolitan area (Metrolina).


Cities and Towns in North Carolina

The map shows the location of the following cities and towns in North Carolina.


Largest cities in North Carolina with a population of more than 100,000. 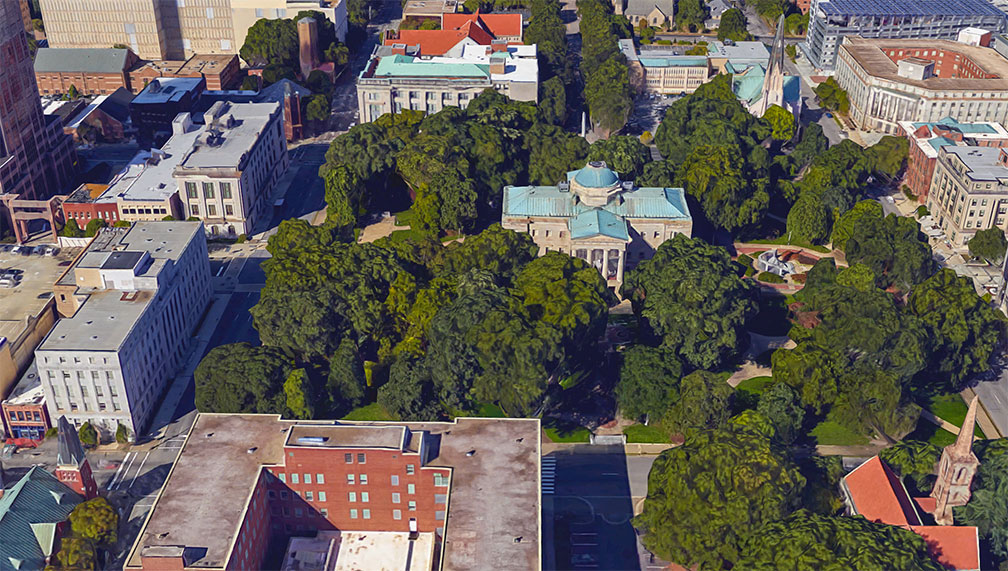 Rendered image of North Carolina's State Capitol in Raleigh. The state is part of the Bible Belt; this can be seen by the fact that there is a church on each corner of Capitol Square.
Image: Google

Other cities and towns in North Carolina:

More about North Carolina and the US