The Landscape Arch, a natural rock arch in the Arches National Park in the high desert of Eastern Utah.
Image: Cacophony 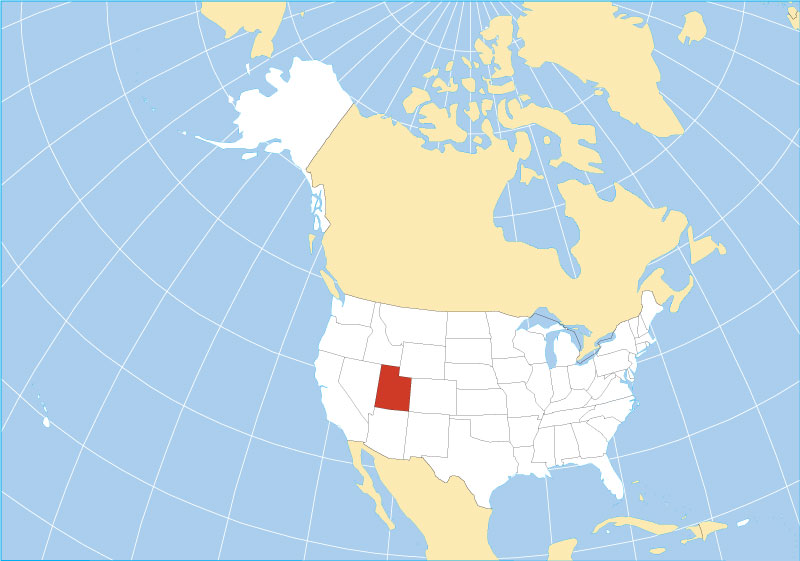 Where in the United States is Utah? Location map of the State of Utah in the US.

Utah is one of the 50 US states located in the western United States. The landlocked state borders Idaho and Wyoming in the north, Colorado in the east, Arizona in the south, Nevada in the west, and New Mexico at a single point at the Four Corners Monument.

The detailed map shows the US state of Utah with boundaries, the location of the state capital Salt Lake City, major cities and populated places, rivers and lakes, interstate highways, principal highways, and railroads.

Topographic Map of Utah showing the location major geographical features in the state: the Wasatch Mountain Range, the Great Salt Lake and Great Salt Lake Desert, the Colorado River, Utah Lake, Sevier Lake and Sevier Desert, Uinta Mountains with Kings Peak, and Monument Valley. (click on the map to enlarge)
Area
Utah covers an area of 219,882 km² of (84,897 sq mi) [1], compared it is somewhat smaller than the island of Great Britain (229,848 km²) or about half the size of Iraq. Compared with other US states, Utah would fit into Texas more than three times.


Lakes
Major geographical features of the Beehive State (its nickname) are the Great Salt Lake Desert, a desert formed by a large dry lake (paleolake) between the Great Salt Lake and the Nevada border, east of Salt Lake City. The evaporated lake was once part of Lake Bonneville, a prehistoric pluvial lake that covered much of the eastern part of North America's Great Basin region.

The Great Salt Lake, the largest saltwater lake in the Western Hemisphere, is also a remnant of Lake Bonneville.

Utah Lake south of Salt Lake City and west of the Wasatch Mountain Range is a shallow freshwater lake with only one river outlet, the Jordan River.

Sevier Lake in the Sevier Desert is fed by the Beaver and Sevier rivers.

Lake Powell is a reservoir on the Colorado River in southern Utah and northern Arizona. Its water is used to retain and supply water to several western United States. 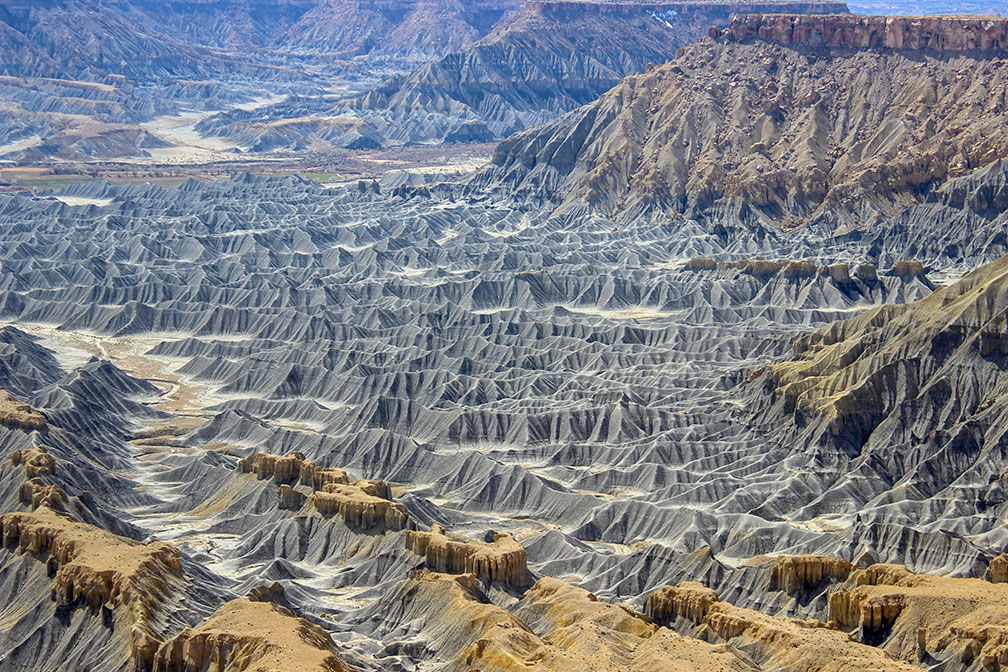 Badlands at the foot of the North Caineville Plateau near Caineville. The pass carved within the Badlands by the Fremont River is known as the Blue Gate.
Image: DanHobley
Utah's major rivers
The Colorado is one of the principal rivers of the Southwestern United States. The Green River in the western part of the country is a chief tributary of the Colorado River. The Bear River is the largest tributary of the Great Salt Lake; it drains the mountainous area and valleys northeast of the lake. 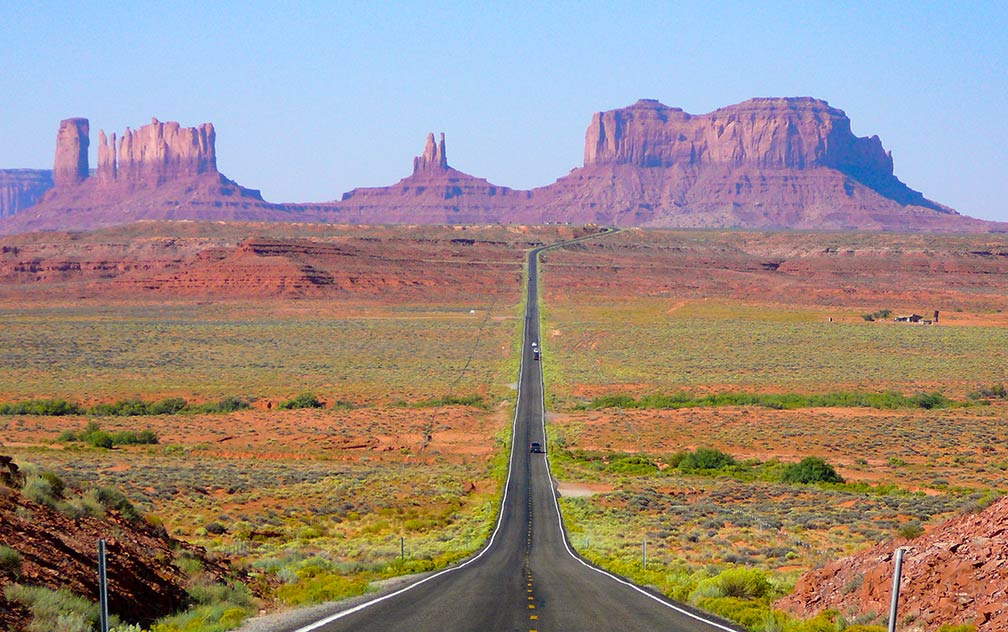 View of Monument Valley in Utah, looking south on highway 163 from some miles north of the Arizona/Utah State line.
Image: Marc Averette

The Wasatch Range is a 430 km (270 mi) long mountain chain running from the Utah-Idaho border south through central Utah.

In Utah's southeast near the city of Moab, along the Utah/Colorado border, there is the La Sal Range with its highest elevation at Mount Peale (3,877 m or 12,721 ft).

The Henry Mountains is in the southeastern portion of Utah, the highest peak is Mount Ellen at 3,512 m (11,522 ft).
The Navajo Mountain on the Utah/Arizona border is the highest point in the Navajo Nation. 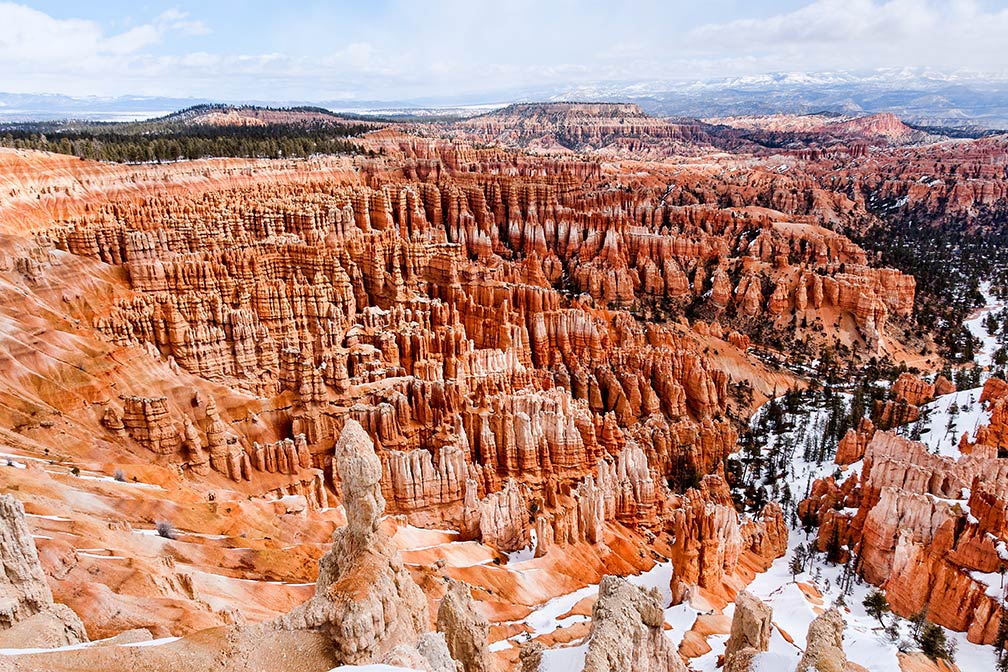 Canyonlands is a maze of canyons, mesas, and buttes shaped the waters of the Colorado River, the Green River, and their tributaries.

The Zion National Park, with its famous Zion Canyon, is a deep and narrow gorge carved by the North Fork of the Virgin River.

Monument Valley Navajo Tribal Park is the Navajo Nation equivalent to a national park. Monument Valley is world-famous for its isolated colossal shafts and buttes of rock. The Valley lies mostly in northern Arizona, but the highway turn-off that leads into it is across the border in Utah. 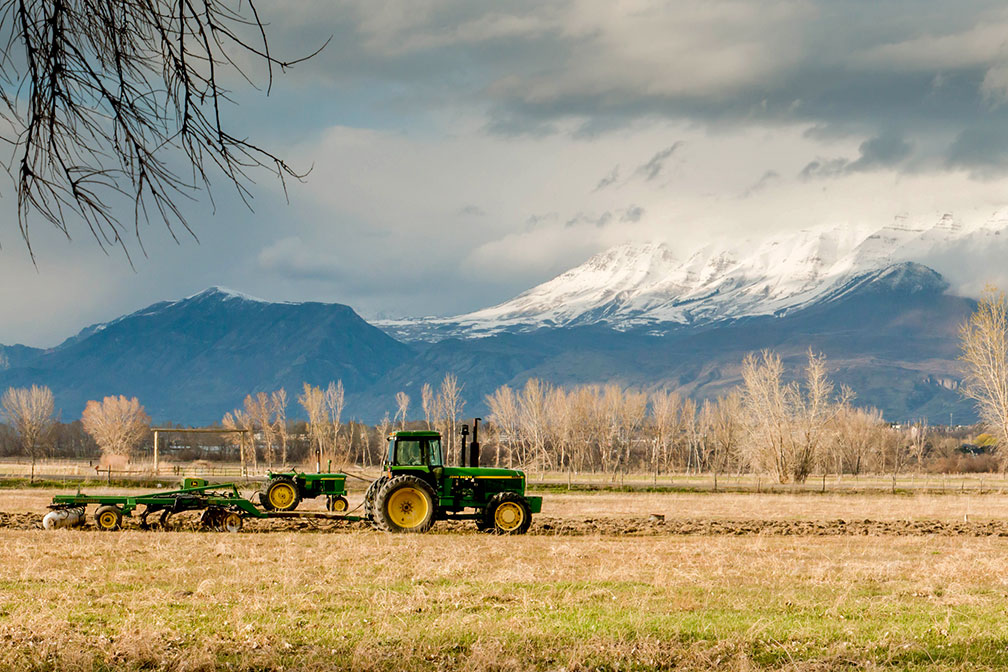 Utah is in large parts only sparsely populated. Around 80% of its population of 3.2 million people (2019 est.) [2] live in the north central part of the state, at the Wasatch Front, a chain of cities and towns running roughly north to south along the Wasatch Mountain Range. Situated at its center lies Utah's capital, the largest city and metropolitan area in the state, Salt Lake City.


Cities and Towns in Utah

Map shows the location of following cities and towns in Utah: 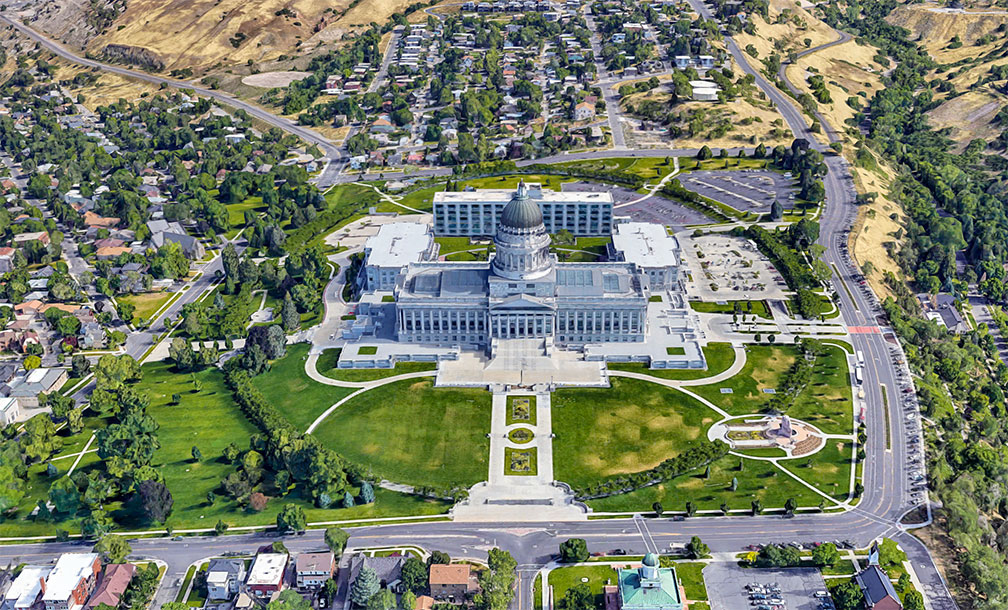 
Other cities and towns in Utah:

More about Utah and the US