The Mauna Kea Observatories on the summit of Mauna Kea, a dormant volcano on Hawaii island. The 4,200-meter high mountain is home to the world's largest observatory for optical, infrared, and submillimeter astronomy. [1]
Image: Gord McKenna

Where in the United States is Hawaii? Location map of Hawaii in the US.

Short history
The Hawaiian Islands were first settled as early as 400 C.E., when Polynesians from the Marquesas Islands, 3550 km (2200 mi) away, traveled to Hawaii's Big Island in canoes. [2]
The islands were later 'discovered' by Captain James Cook in 1778, who named the archipelago the Sandwich Islands. 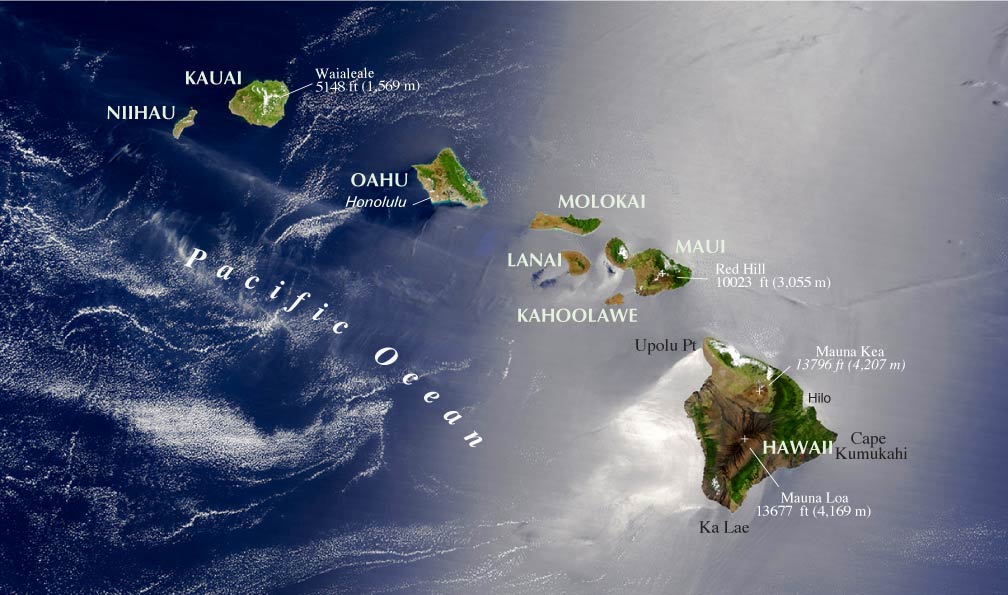 Satellite Image map of Hawaii's main islands: Hawaii, Kahoolawe, Maui, Lanai, Molokai, Oahu, Kauai, and Niihau.
Image: NASA
One hundred plus years later, in 1893, a Hawaii-based secret society called the Hawaiian League, a group of planters and businessmen (mainly white men of North American origin) led a coup against Queen Liliuokalani, at that time monarch of the Kingdom of Hawaii, and established an oligarchical government.

The anti-monarchist and pro-American group sought annexation by the United States, but then-incumbent President Grover Cleveland rejected their requests. In 1898, however, President McKinley and the American public were more favorably disposed toward acquiring the islands.[3]

Sixty years later, Hawaii was admitted as the 50th state, admission to the Union on the 21st August 1959. 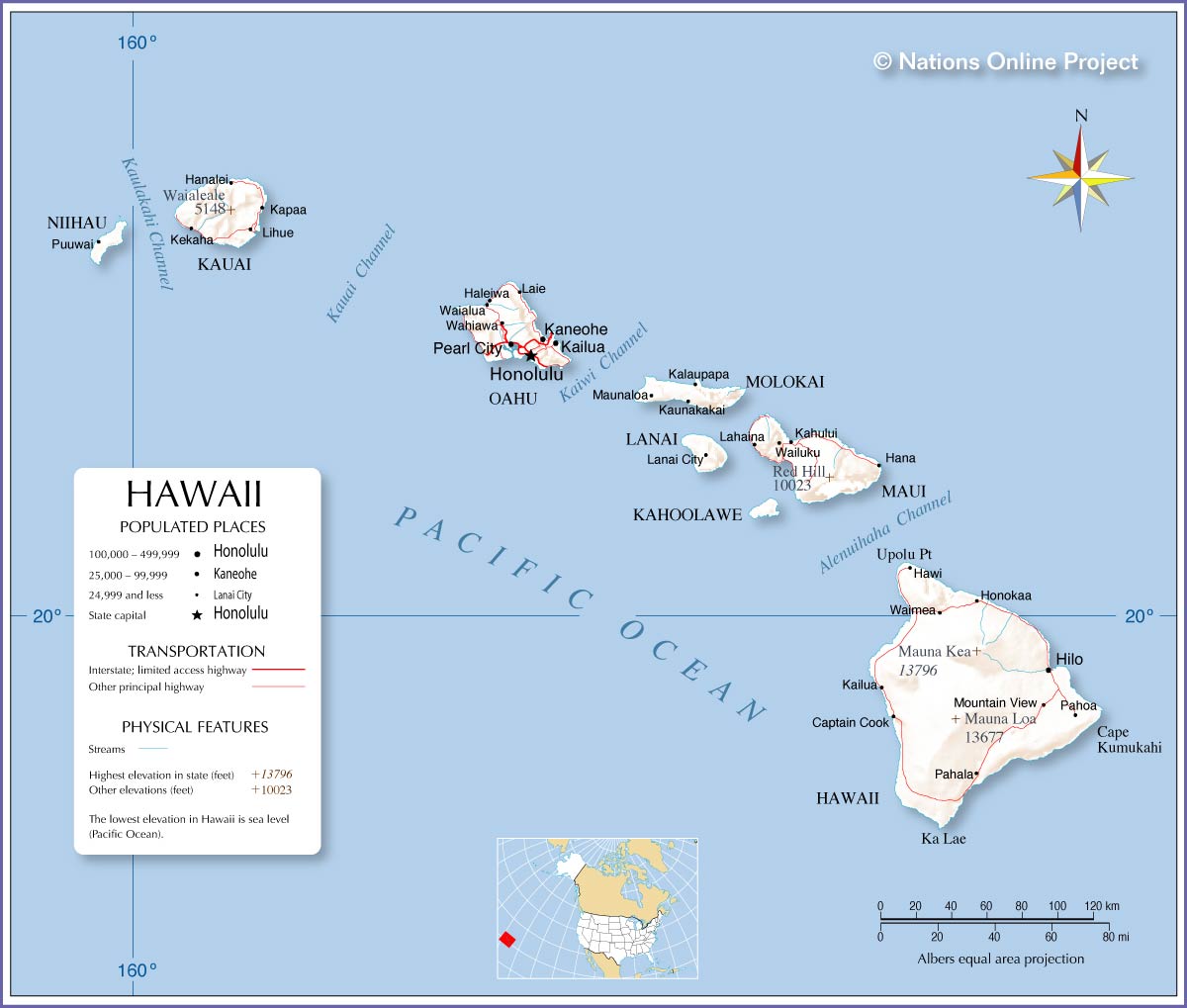 The detailed map below shows the US state of Hawaii with its islands, the state capital Honolulu, major cities and populated places, volcanoes, rivers, and roads.

Area
The Aloha State (its official nickname) consists of hundreds of islands spread over a distance of more than 2,400 km (1,500 mi). The total area of the islands is 28,313 km² (10,932 sq mi), [4] compared it is slightly smaller than Belgium (30,528 km²) or twice the size of the Bahamas. Compared with other US states, Hawaii is somewhat larger than New Jersey, but it would fit into Texas 25 times. 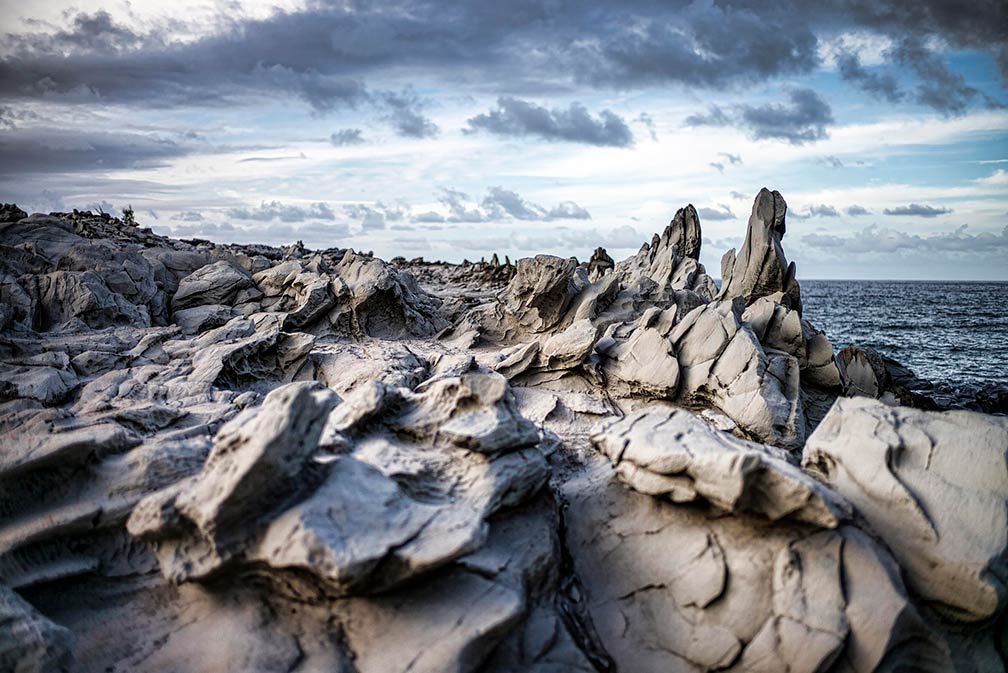 Dragon's Teeth at Makaluapuna Point, Maui. The rock formation was formed from one of Maui's lava flows and pounding ocean waves, the natural monument is a sacred place to Native Hawaiians.
Image: Christopher Michel

On the map above, you see the eight largest islands, the "main islands" located at the southeastern end of the archipelago. In order from the northwest to southeast, they are Niihau (Ni'ihau, The Forbidden Isle), Kauai (Kaua'i, The Garden Isle), Oahu (O'ahu, The Gathering Place), Molokai (Moloka'i, The Friendly Isle), Lanai (Lānaʻi, The Pineapple Isle), Kahoolawe (Kaho'olawe, The Target Isle), Maui (The Valley Isle), and Hawaii (Hawai'i, The Big Island).


Main Geographical Features of Hawaii
The geographical features of Hawaii are just stunning. The islands rise from the floor of the abyssal Northeast Pacific Basin that has an average depth of 5,000 m. The Hawaiian Islands are the exposed peaks of the Hawaiian-Emperor seamount chain. The massive submarine mountain range was formed by volcanic activity over several hotspots in the earth's mantle and extends for about 6,200 km (3,900 mi) from the Aleutian Trench in the far northwest Pacific to the island of Hawaii. 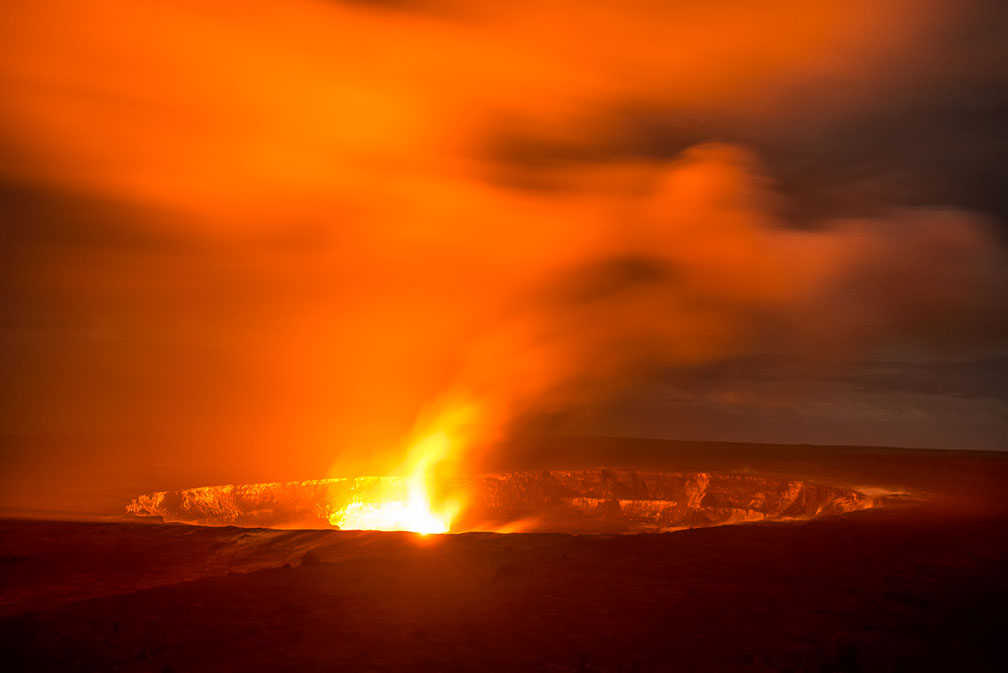 Halemaumau Crater, the pit crater within the much larger summit caldera of Kīlauea in Hawaii Volcanoes National Park.
Image: Howard Ignatius
Hawaii has not one but two outstanding UNESCO World Heritage Sites.


Mauna Loa is the world's largest shield volcano, and Kīlauea is one of the world's most active volcanoes.

The site serves as an excellent example of island-building through volcanic processes. Volcanic eruptions have created a constantly changing landscape, and the lava flows reveal extraordinary geological formations.

Rare birds and endemic species can be found there, as well as forests of giant ferns.

Map of Papahanaumokuakea, the main Hawaiian Archipelago to the right.
Papahānaumokuākea

is a vast and isolated cluster of small, low lying islands and atolls, with their surrounding ocean, the protected area begins roughly 250 km to the northwest of the main Hawaiian Archipelago.


The Marine National Monument is one of the world's largest protected areas with a length of over some 1930 km.


The archipelago has deep cosmological and traditional significance for living Native Hawaiian culture. It is considered as an embodiment of the Hawaiian concept of kinship between man and nature. 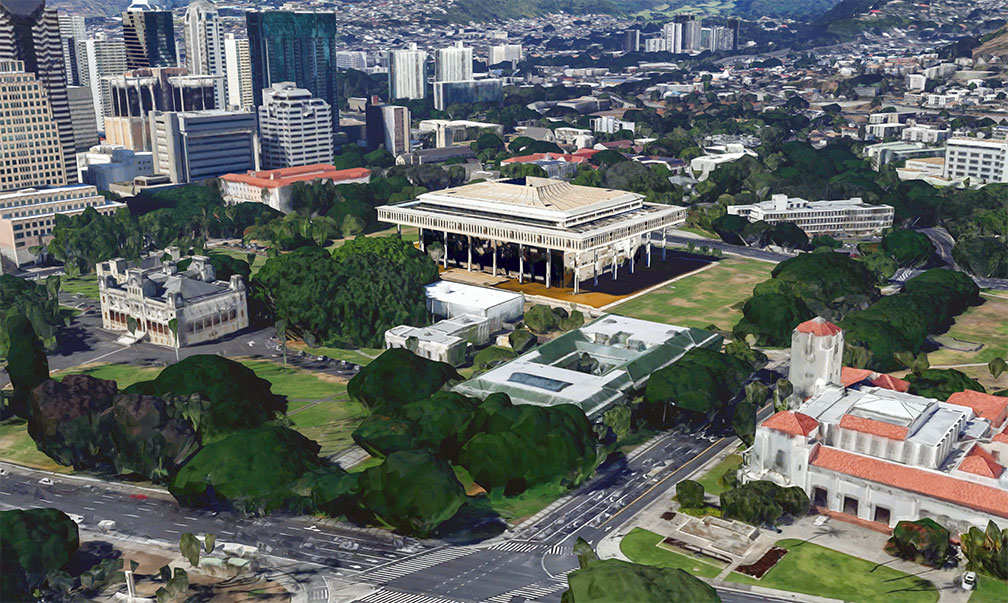 Rendered image of Hawaii State Capitol in Honolulu (in the center). Hawaii's statehouse was completed in March 1969. The Hawaiian international architecture style building houses the bicameral Hawaii State Legislature. The small building to the left is the Iolani Palace, the former royal residence of the rulers of the Kingdom of Hawaii. The building to the right is the Honolulu City Hall.
Image: Google

Hawaii has a population of 1.41 million people (in 2019). [6] The capital, principal port, and largest city is Honolulu.
Hawaii's largest urban area is the Island of Oahu, the third largest of the Hawaiian Islands is home to about two-thirds of Hawaii's entire population.
Official languages are English and Hawaiian.

Cities, Towns, and Villages in Hawaii

The map above shows the location of following cities and towns in Hawaii. 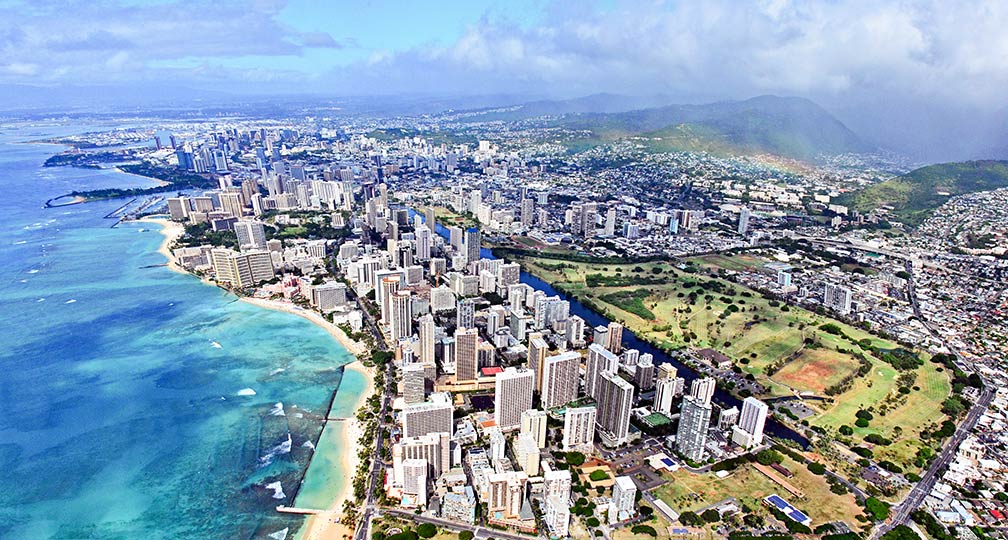 
More about Hawaii and the US

Cities -- Information about, and a searchable map of:

Map of Oceania and the Pacific Islands

Searchable Maps of Countries and Capital Cities of the Americas
Weather Conditions Honolulu: