Craters of the Moon National Monument, the alien landscape is situated in the Snake River Plain, about 145 km (90 mi) northeast of Twin Falls.
Image: NikonFDSLR 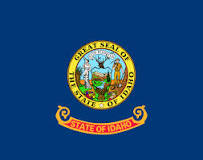 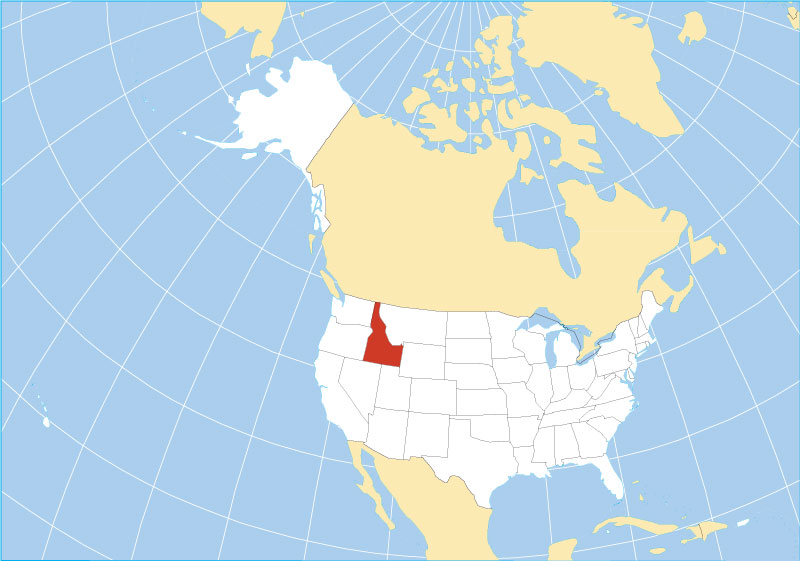 Where in the United States is Idaho? Location map of the State of Idaho in the US.

Idaho is a landlocked mountainous state in the Pacific Northwest region of the United States.

At 45th parallel north, it shares a 72 km (44.7 mi) long border with the Canadian province of British Columbia. The ridges of the Bitterroot Range define its border with Montana.

Idaho also borders the U.S. states of Wyoming in the southeast, Nevada, and Utah in the south, and Washington and Oregon in the west. 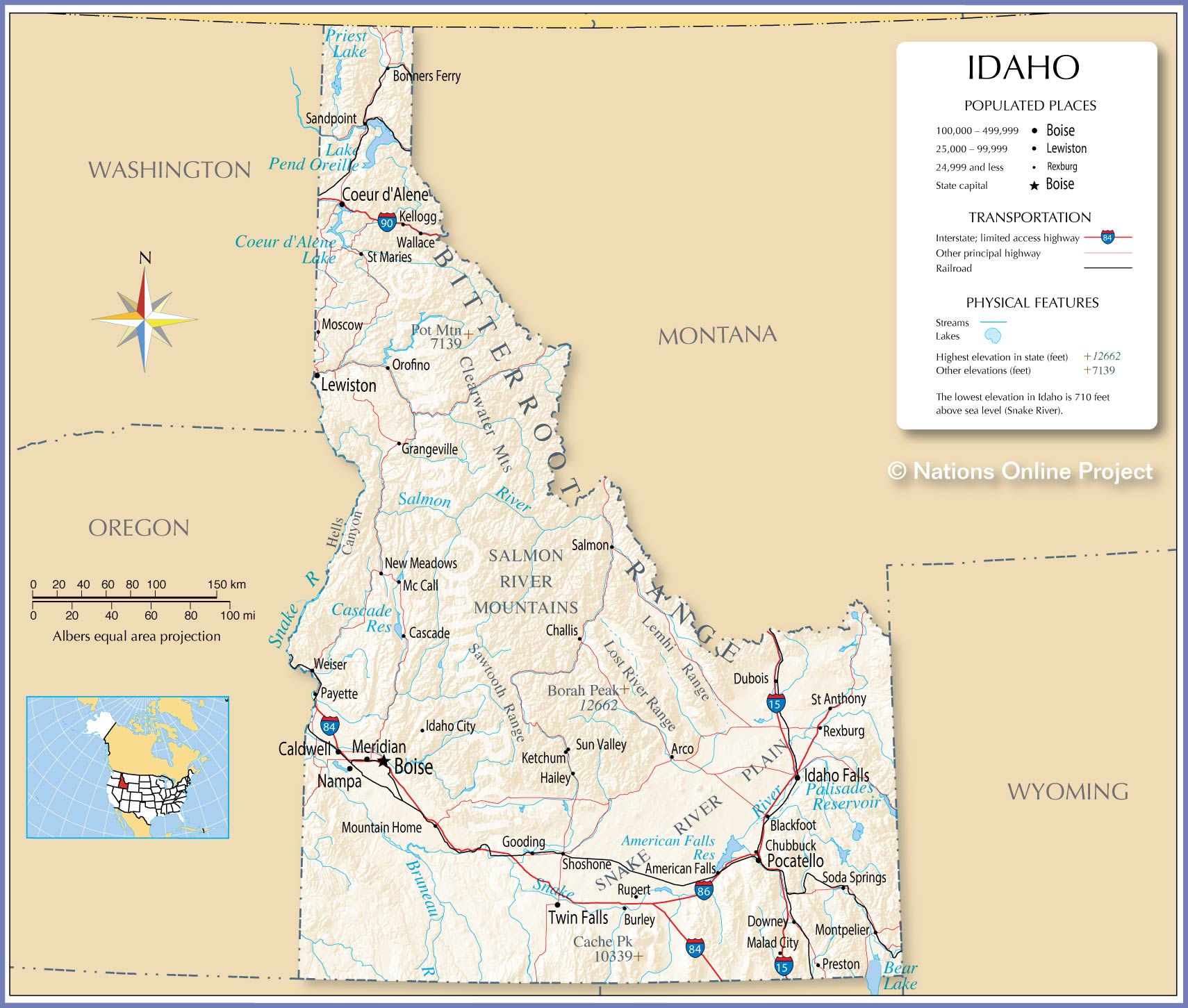 The detailed map shows the US state of Idaho with boundaries, the location of the state capital Boise, major cities and populated places, rivers and lakes, interstate highways, principal highways, and railroads.

Idaho was part of Oregon Country and the original home of the Shoshone and the Nez Perce peoples. Because of its remote location, it was one of the last of the lower 48 states to be visited by Europeans. French-Canadian trappers were the first Europeans in the region. The Lewis and Clark expedition crossed Idaho two times, once in 1805 on the way to the Pacific Ocean, and in 1806 on the way back. The Oregon Trail, which ended at Fort Vancouver in Washington, crossed Idaho Territory. Thousands of fortune seekers passed through Idaho during the California Gold Rush; only a few settled in the area.
The United States acquired the region through a treaty with Great Britain in 1846.
Idaho Territory was organized from parts of Dakota, Nebraska, and Washington territories and included parts of present-day Montana and Wyoming. The territory existed from 4 March 1863 to 3 July 1890, when Idaho Territory joined the Union and became the 43rd state. The territorial capital was first Lewiston and was then moved to Boise in 1865.
When Idaho became a territory, there were four counties Boise, Idaho, Nez Perce, and Shoshone. 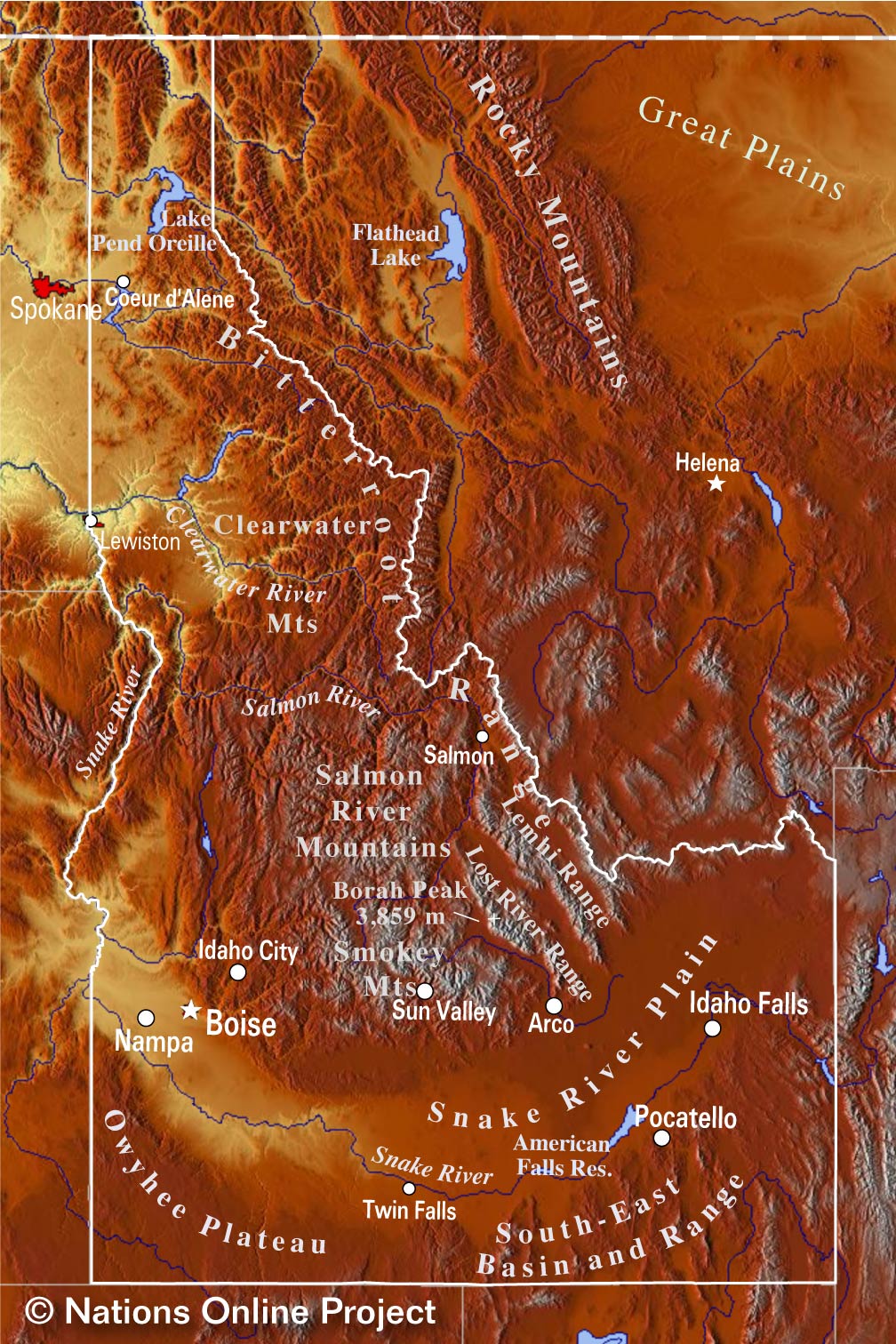 Topographic Regions Map of Idaho. (Click the map to enlarge)


Idaho is divided into 44 counties.


Some Idaho Geography
Rivers, mountains, and farmland dominate Idaho's landscape, which includes a portion of the Rocky Mountains.


Mountains
The Bitterroot Range is a subrange of the Rockies; it runs along the Idaho-Montana border.

The Salmon River Mountains and the Smokey Mountains are both parts of the Rocky Mountains; they cover most of the central region of the state.


Highest point
Idaho's highest point is Borah Peak at 3,859 m (12,662 ft), located in the Lost River Range, another subrange of the Rockies.

Canyon
The deepest gorge in North America is located along the border of eastern Oregon, eastern Washington, and western Idaho. The canyon is part of the Hells Canyon National Recreation Area 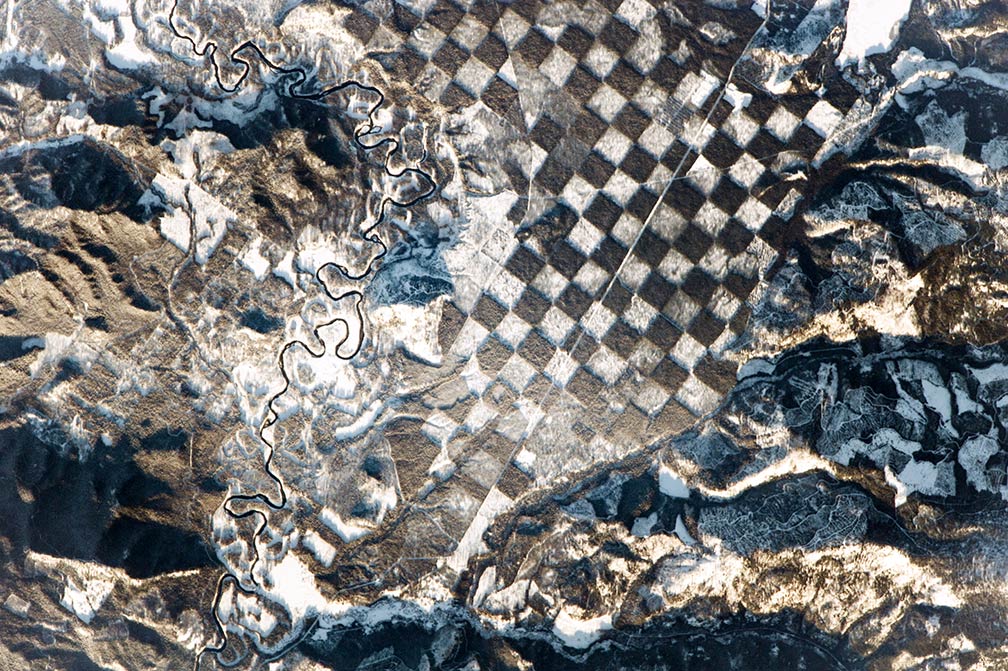 Checkerboard pattern alongside the Priest River in northern Idaho. The squares in this landscape checkerboard appear to be the result of forest management.
Image: NASA

In the southern part of the state, the Snake River Plain dominates the landscape, the flat, arc-shaped depression covers about a quarter of Idaho, on its course through the plain, the Snake River has created many canyons and gorges.

Within the Snake River Plain is the Craters of the Moon National Monument, a vast flood basalt area with scattered islands of cinder cones and sagebrush, midway between Boise and the Yellowstone National Park. The three major lava fields are the result of volcanic eruptions between 15,000 and 2,000 years ago.


Towhee River Wilderness
The wilderness area is located on the high basalt plateaus (Towhee Plateau) of Towhee County in southwestern Idaho near the Oregon border. It protects the upper Towhee River, its tributaries, and the surrounding desert canyon landscape. [2]

is mostly in Wyoming, but the park also spreads into parts of Montana (3%) and Idaho (1%). The park is since 1978 a UNESCO World Heritage Site. 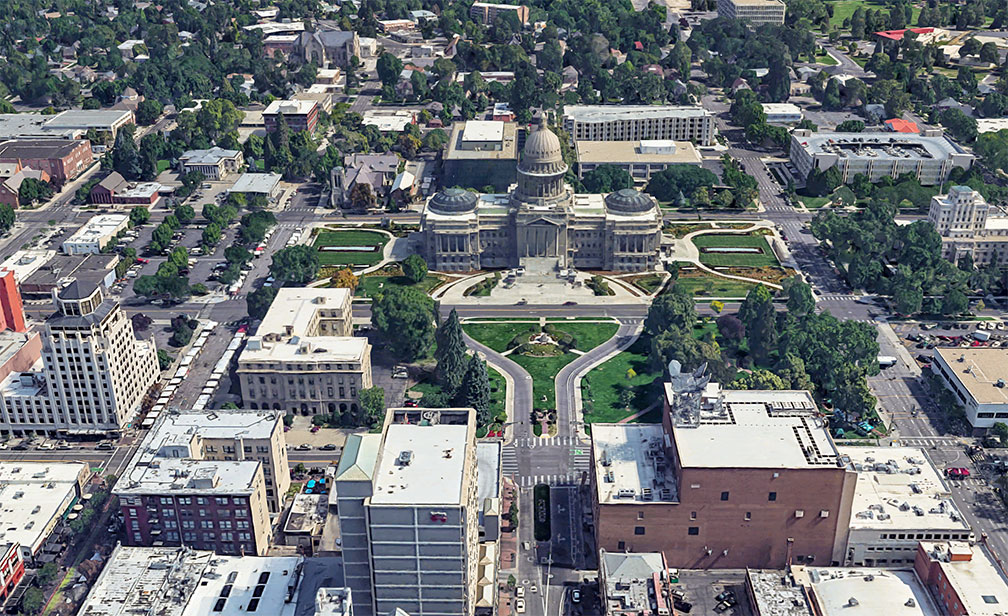 Rendered image of Idaho State Capitol building in Boise, the neoclassical 1914 statehouse, is home to the government of the state of Idaho.
Image: Google

The largest city and the state's capital is Boise; the largest metro is the Boise metropolitan area (Boise City–Nampa, Idaho Metropolitan Statistical Area), also known as the 'Treasure Valley.'

Cities and Towns in Idaho 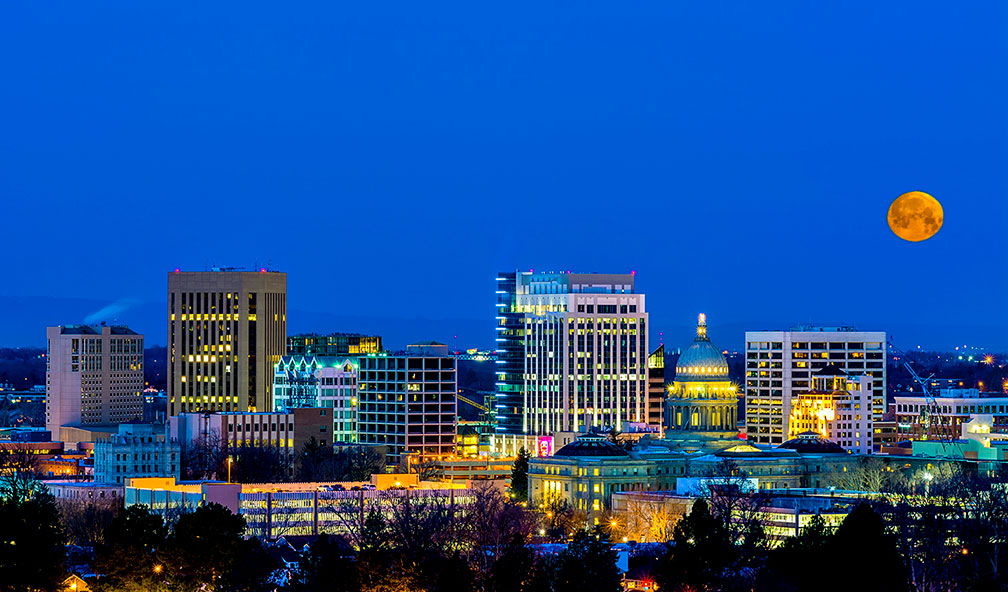 Blue night sky over Boise Idaho. Boise is the capital and most populous city of Idaho and the county seat of Ada County.
Image: Charles Knowles

The map shows the location of following cities and towns in Idaho:

Cities with a population of more than 50,000: Napa, Meridian, Idaho Falls, and Pocatello.

More about Idaho and the US