Satellite View and Map of the City of Honolulu, Hawaii

The satellite view shows Honolulu, most populous urban center, principal port, and capital of Hawaii, one of the 50 states of the

US. The city stretches along the southeastern coast of the island of Oahu.
Honolulu is the principal gateway to Hawaii. The chain of islands is situated in the North Pacific about 2500 mi (4100 km) south west of Los Angeles. Hawaii was annexed by the United States in 1898 and became the 50th state in 1959. 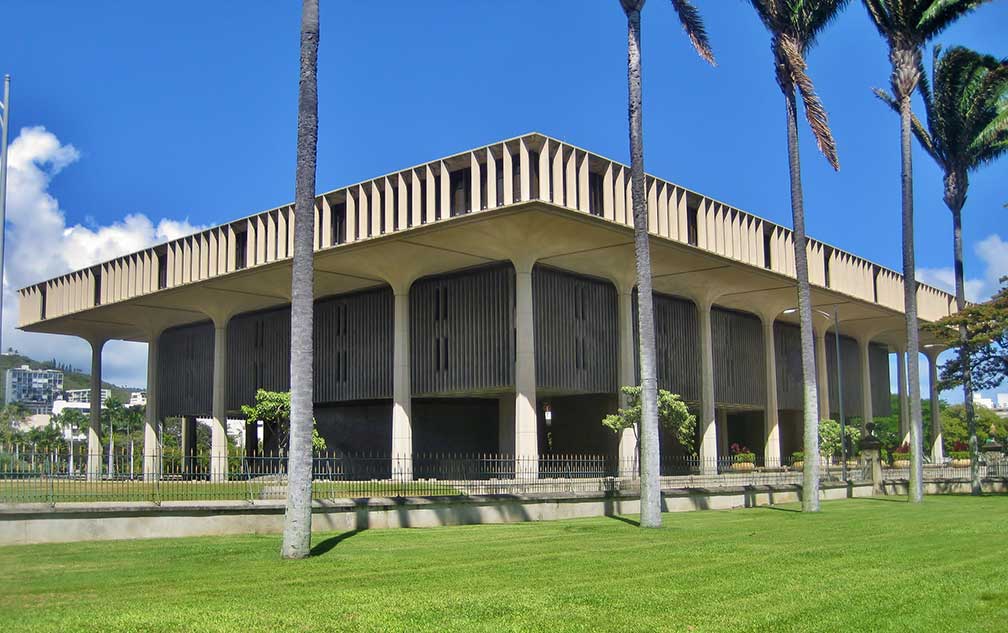 The capital and the islands are a popular tourist destination and the first choice for retirement plans among Americans, understandable because temperatures vary little throughout the months with average high temperatures of 27-32°C (80-89°F) and lows of 19-24°C (65-75°F) throughout the year.

Downtown Honolulu is the financial, commercial, and governmental center of Hawaii and offers anything an island metropolis has to offer, plus the Hawaiian charm of Aloha spirit.

Honolulu is most famous for its beaches, surfing, downtown nightlife and the fact that former U.S. President Barack Obama spent his childhood here.

The city is home to the University of Hawaii at Mānoa (www.hawaii.edu) and the Hawaii Pacific University (www.hpu.edu).

Honolulu was in National Geographic's Top 10 list of Beach Cities, and in Mercers Quality of Living City Ranking 2018, Honolulu ranked 1st in the Sanitation ranking. 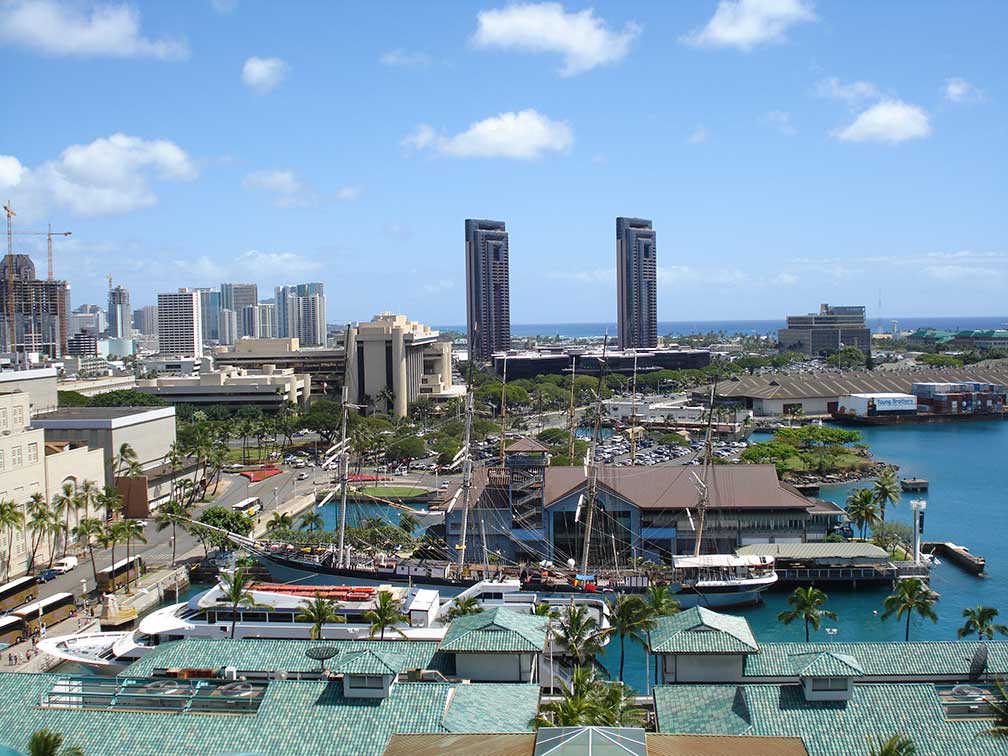 The Hawaii Maritime Center was the principal maritime museum in the State of Hawaii from 1988 until it closed in 2009. Located at Pier 7 of Honolulu Harbor east of Aloha Tower.
Image: Cumulus Clouds


Diamond Head is a famous vantage point on a sleepy volcano; it usually offers breathtaking views overlooking the Waikīkī neighborhood of Honolulu and the Pacific Ocean as far as the eye can see.

ʻIolani Palace was the former royal residence; from 1893 until 1969 it was used as the capitol building for the Provisional US Government of Hawaii.

Moana Hotel, also known as Moana Surfrider is a famous historic hotel in Honolulu opened in 1901, it was the first hotel in the city's Waikiki neighborhood.

Aloha Tower is a ten stories 56 m (184 ft) tall lighthouse built at Pier 9 of Honolulu Harbor in 1926; it is a famous Hawaii landmark.

Bishop Museum (www.bishopmuseum.org), the largest museum in Hawai'i is a museum of history and science; it is Hawaii's State Museum of Natural and Cultural History.

Honolulu Museum of Art (honolulumuseum.org) the largest art museum in Hawaii showcases one of the largest collections of Asian and Pan-Pacific art with more than 50,000 objects.

Ford Island, an islet in the heart of Pearl Harbor with an old runway, formerly the site of an ancient native Hawaiian swinger ritual. 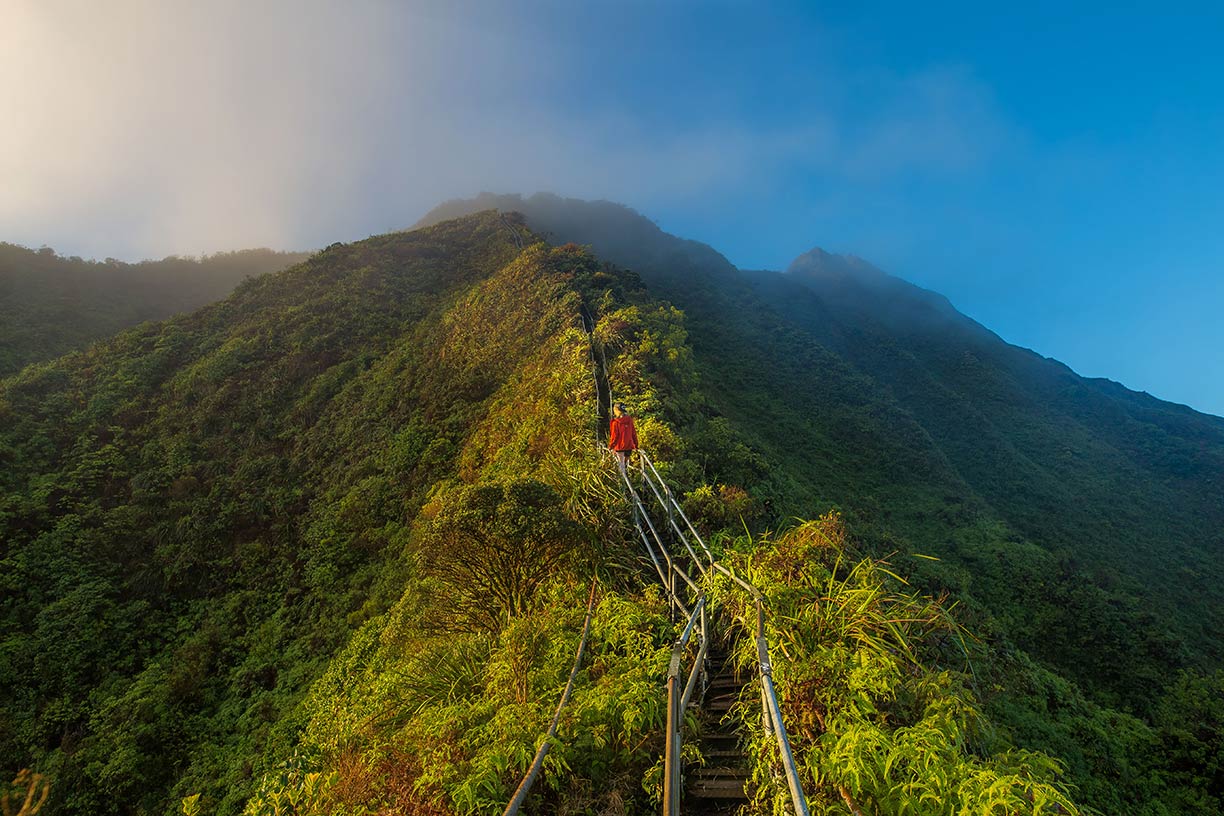 Halona Blowhole, blowhole in a coastal rock formation, the blowhole is most active when the tide is high, and the winds are strong.

Wet’n’Wild Hawaii (www.wetnwildhawaii.com), is the only water amusement park in Hawaii.

Haiku Stairs, known as the Stairway to Heaven is a steep hiking trail along the ridge of Ko'olau mountain.

For military fans there is the USS Bowfin, a Balao-class submarine, the USS Missouri (BB-63), an Iowa-class battleship, the U.S. Army Museum of Hawaii (www.hiarmymuseumsoc.org) inside Battery Randolph, and the Pacific Aviation Museum Pearl Harbor (www.pacificaviationmuseum.org) is an aviation museum with exhibits relating to the Japanese attack on Pearl Harbor in December 1941.


Just zoom in (+) to see Aloha Tower one of the best-known landmarks of Hawaii, located at Pier 9 of Honolulu, to south-east docked is the Falls of Clyde, the last surviving iron-hulled, four-masted full-rigged ship in the world.

The Map shows a city map of Honolulu with expressways, main roads, and streets, the Pier 2 Cruise Terminal, and Honolulu Harbor, the principal seaport of the State of Hawaiʻi.
Honolulu International Airport (IATA code: HNL) is one of the busiest airports in the United States and is the principal hub of Hawaiian Airlines. The airport is located 10 km (6 mi) by road northwest of Oahu's central business district.

More about Hawaii and the US