Satellite View and Map of the City of Madison, Wisconsin

Skyline of Madison, Wisconsin as seen from Lake Monona. Monona Terrace convention center in the foreground on the lakefront.
Image: Emery

The satellite view shows Madison, the capital and second largest city of the State of Wisconsin, a Midwestern state with coastlines at Lake Superior and Lake Michigan in the East North Central Division of the

United States. The city is also the county seat of Dane County. Madison is located in the Four Lakes region in south-central Wisconsin about 80 mi (127 km) west of Milwaukee, the state's largest city. A part of Madison is built on the isthmus (land-bridge) between Lake Mendota and Lake Monona. 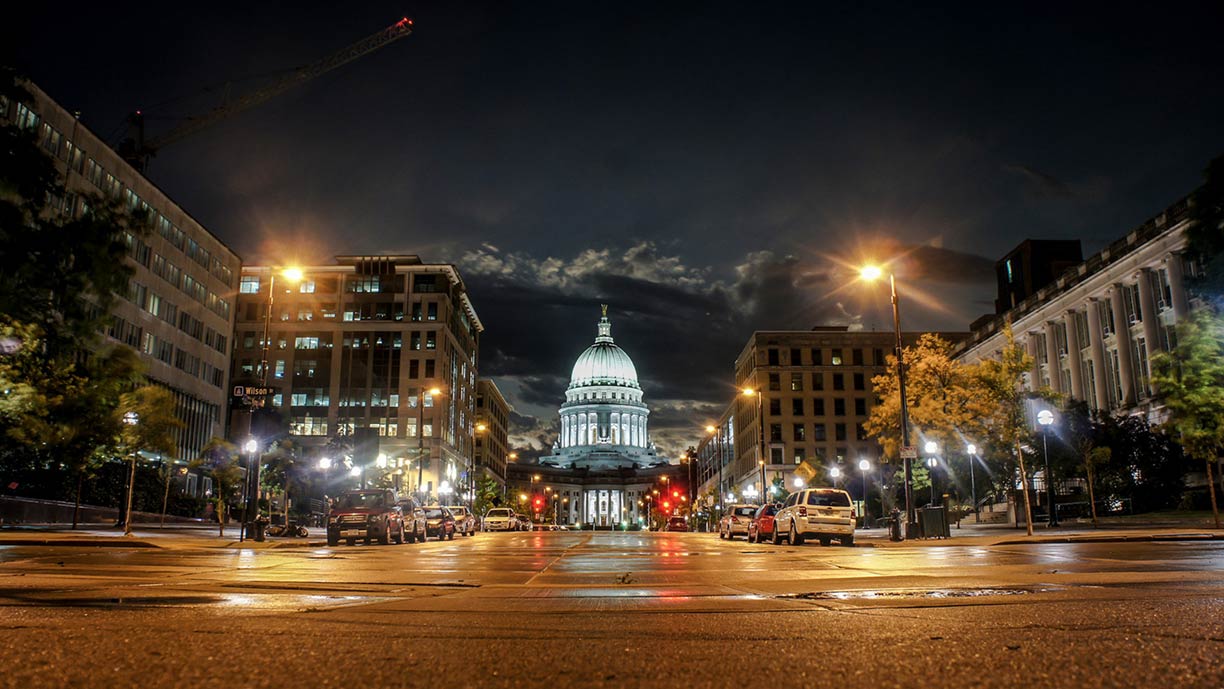 
Wisconsin Territory was created in 1836 and in need for a capital. Although Madison existed only on paper back then, it was chosen by vote as the new seat of government, vigorously lobbied by James Doty, who had purchased over a thousand acres (4 km²) of land on the isthmus.


The city is home to the University of Wisconsin–Madison, Wisconsin's flagship public university; Edgewood College, a private Dominican liberal arts college; and the Madison Area Technical College, a community college with an emphasis on technique.

Madison's economy is a government-based economy, the state government, the University of Wisconsin–Madison, and UW Health are the top employers. Other economic sectors are manufacturing, services, health (11 accredited hospitals), biotechnology and advertising. 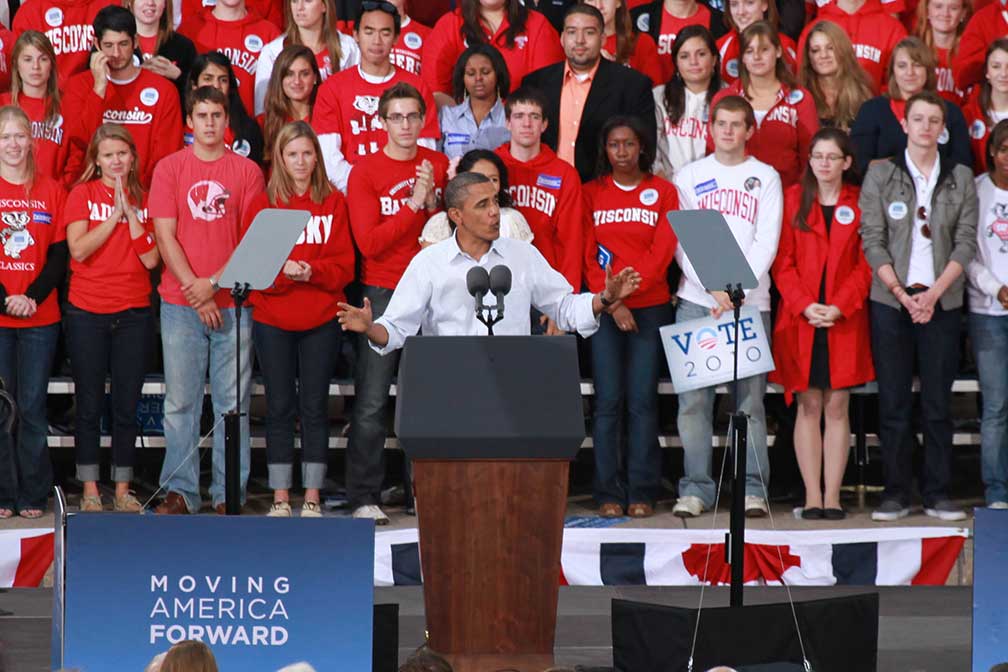 Madison is home to a number of historical sites and popular festivals.

Historical places:
Wisconsin State Capitol (tours.wisconsin.gov) the 100 years old Badger state capitol is the third capitol building since Wisconsin's statehood in 1848; it was completed in 1917. The capitol building houses both chambers of the Wisconsin legislature, the Supreme Court and the Office of the Governor.


Governor's Mansion (wisconsinexecutiveresidence.com) is an Executive Residence in Maple Bluff on the eastern shore of Lake Mendota. The building is the residence of Wisconsin's state governor.


Places:
Library Mall is a city plaza in front of the Memorial Library, the primary research library in the state. The square, famous for its food trucks, is now a shopping mall in the making. 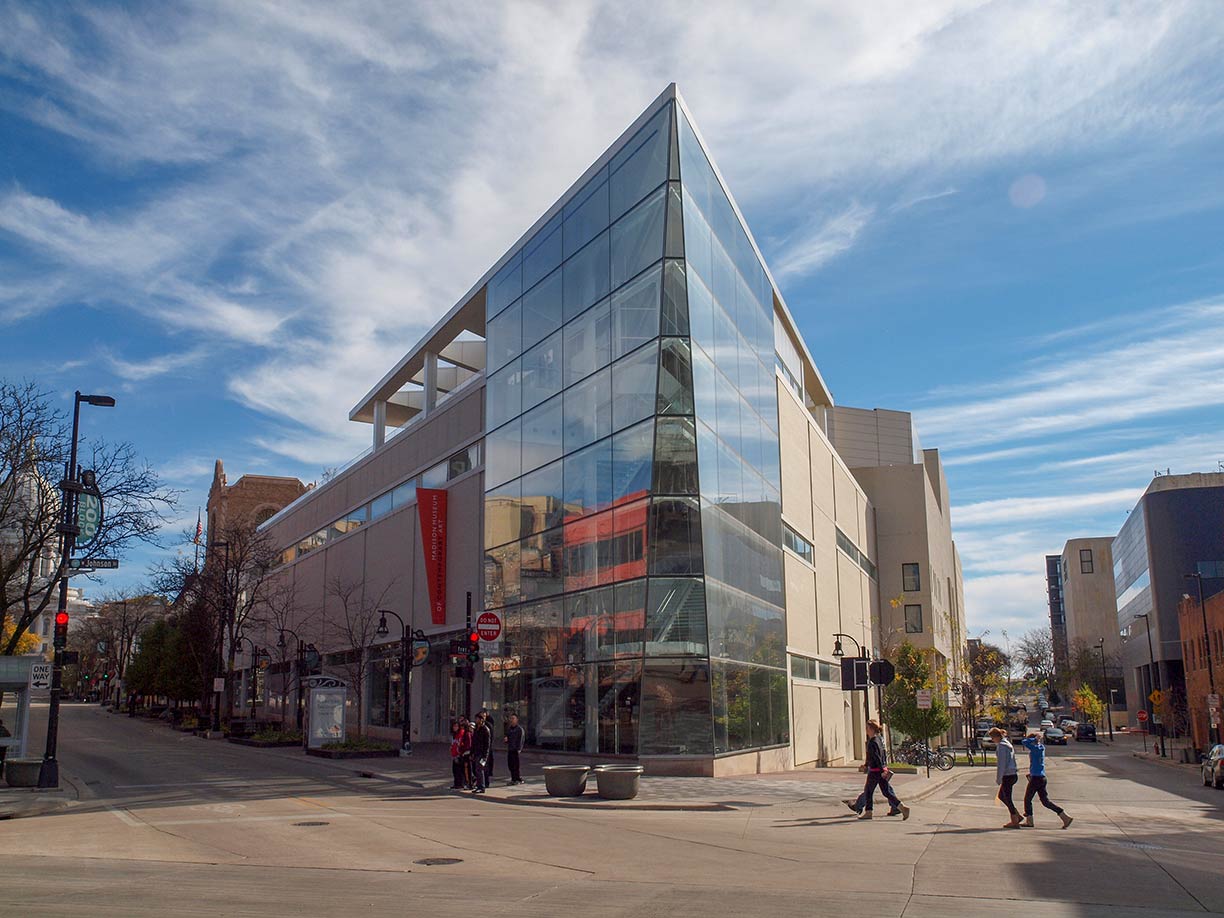 Chazen Museum of Art (chazen.wisc.edu) is a major art museum on the compound of the University of Wisconsin–Madison, home to the second-largest collection of art in Wisconsin with more than 20,000 of works of European and American artists.

Madison Museum of Contemporary Art (www.mmoca.org) MMoCA is an admission-free art museum with four gallery spaces and a Rooftop Sculpture Garden. The museum is part of Madison's Overture Center for the Arts.

Performing arts:
Overture Center for the Arts (www.overture.org) performing arts center with several theaters and performing stages and an art gallery; it is also home to the Madison Symphony Orchestra (madisonsymphony.org).

Orpheum (madisonorpheum.com) is a live performance and musical theater in downtown.

Majestic Theatre (majesticmadison.com) the Vaudeville theater was built in 1906; it is a part of Madison's history. The 600-capacity live music venue is the oldest theater in town.

Leonard R. Ingersoll Physics Museum (info) is a museum about physical concepts with hands-on exhibits. The museum is located in the Chamberlin Hall on the University of Wisconsin-Madison campus. 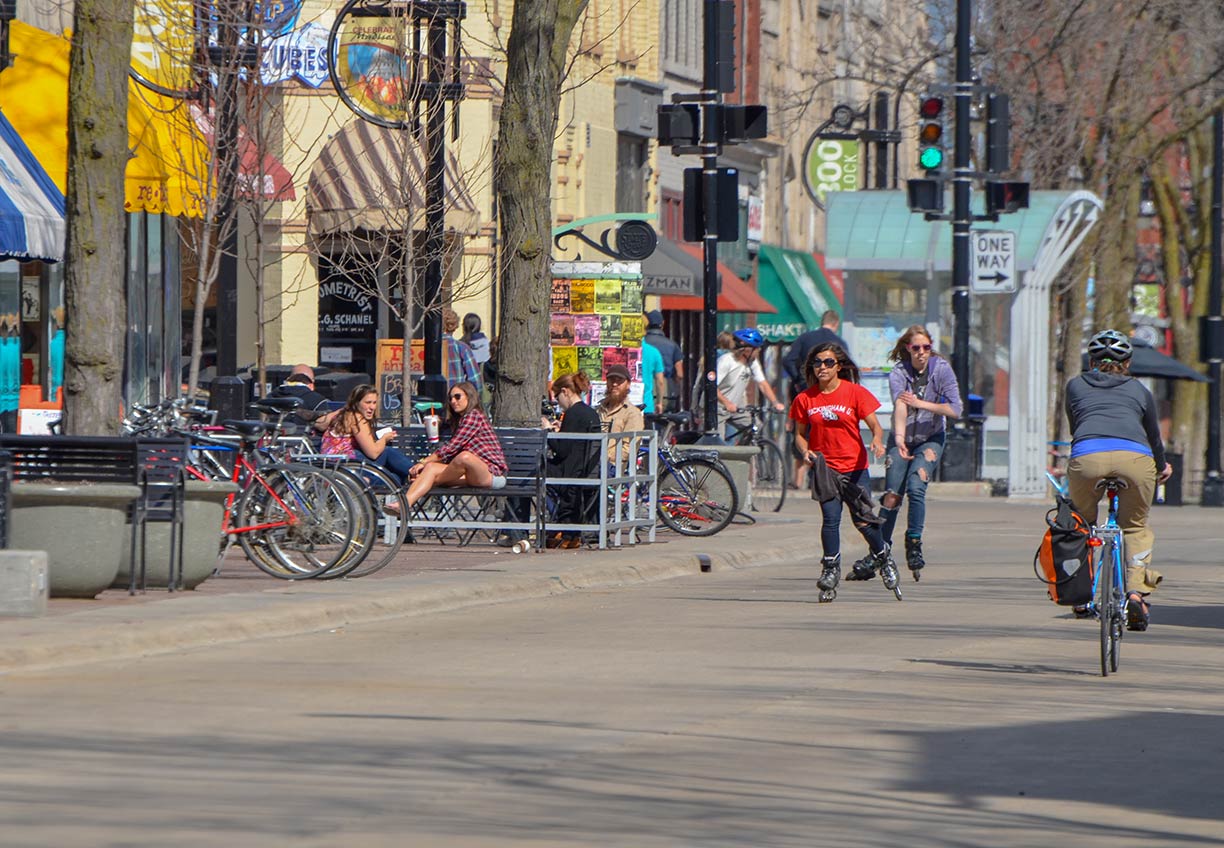 Shopping:
State Street is an urban pedestrian zone which offers a variety of shops, bars, and restaurants, and the usual street musicians, jugglers, vagrants, and panhandlers.

Hilldale Shopping Center (www.hilldale.com) is a shopping mall and lifestyle center with over 40 specialty stores in the west side of Madison.

Events:
Art Fair on the Square (info) in July exhibitors showcase their diverse works of art, including paintings, photographs, sculptures, and jewelry.

Concerts on the Square is an outdoor concert series held in each summer where the Wisconsin Chamber Orchestra (wisconsinchamberorchestra.org) is performing on the lawn of the Wisconsin State Capitol in Madison.


Parks:
Henry Vilas Zoo (vilaszoo.org) is a small zoo in Vilas Park with a basic set of animals, but it is one of the few admission-free zoos in the US.

Olbrich Botanical Gardens (www.olbrich.org), are gardens with many ponds and Midwest-hardy plants, a conservatory, and a Thai Pavilion.

UW Arboretum (arboretum.wisc.edu) 1,200 acres of trees, shrubbery, cultivated fields and pastures that had previously fallen into disuse. It is now a teaching and research facility of the University of Wisconsin.

Capital Springs State Recreation Area (info) is a state park and a recreation area around the northern part Lake Waubesa.

The Olin Park is located on the southern shores of Lake Monona; it offers walking trails, a beach, picnic tables, and excellent views of downtown Madison.

Kohl Center (info) is a sports and event arena on the grounds of the University of Wisconsin–Madison; the athletic center is home to the UW men's, and women's basketball teams and its ice hockey teams.


Just zoom in (+) to see Wisconsin State Capitol, the only State Capitol ever built on an isthmus. The building houses Wisconsin's State Supreme Court, the Senate, and the Office of the Governor.

More about Wisconsin and the US

Other Cities in Wisconsin:

External Links:
Madison
Official website of the City of Madison.