You're on a plane heading somewhere, you cross several time zones, and you will possibly suffer from jet lag later because your inner clock rebels.
Image: kk nationsonline.org

What is a time zone? 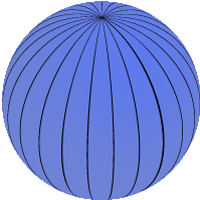 Earth is divided into 24 segments known as lunes.


A time zone is defined as an area where a uniform standard time applies for legal, economic and social purposes. Standard time zones are 15 degrees of longitude wide.

A time zone is ideally one of 24 spherical lunes (a section on the globe in a north/south direction) with equal-width (15 degrees), each assigned with one of the 24 hours (makes together one day and one rotation of the Earth).

Normally, a uniform standard time is maintained in each section to track the day and night cycle. This means that people in each geographic region within a time zone use the same time.

All these zones are defined by an offset from the Coordinated Universal Time (UTC; see below) by a number of hours (UTC−12 to UTC+14) centered on the prime meridian (0°; since 1884 the Greenwich meridian [1]).

Today's use of time zones tends to follow more often the boundaries of countries and their subdivisions instead of the standard parallels because it is convenient in close economic or political areas to keep the same time. For example, most of Alaska uses Alaska Time, which spans three standard time zones. The state used two time zones until 1983, when it placed the capital, Juneau, in the same time zone as the more populous Anchorage and Fairbanks.
China spans four time zones but uses only one. The time difference between Bangkok, Thailand, and Kuala Lumpur, Malaysia, is one hour, although the two capitals are on almost the same longitude.


U.S. Time Zones
The time zone map below shows the six time zones of the United States, and a series of clocks show the actual time in the different time zones. 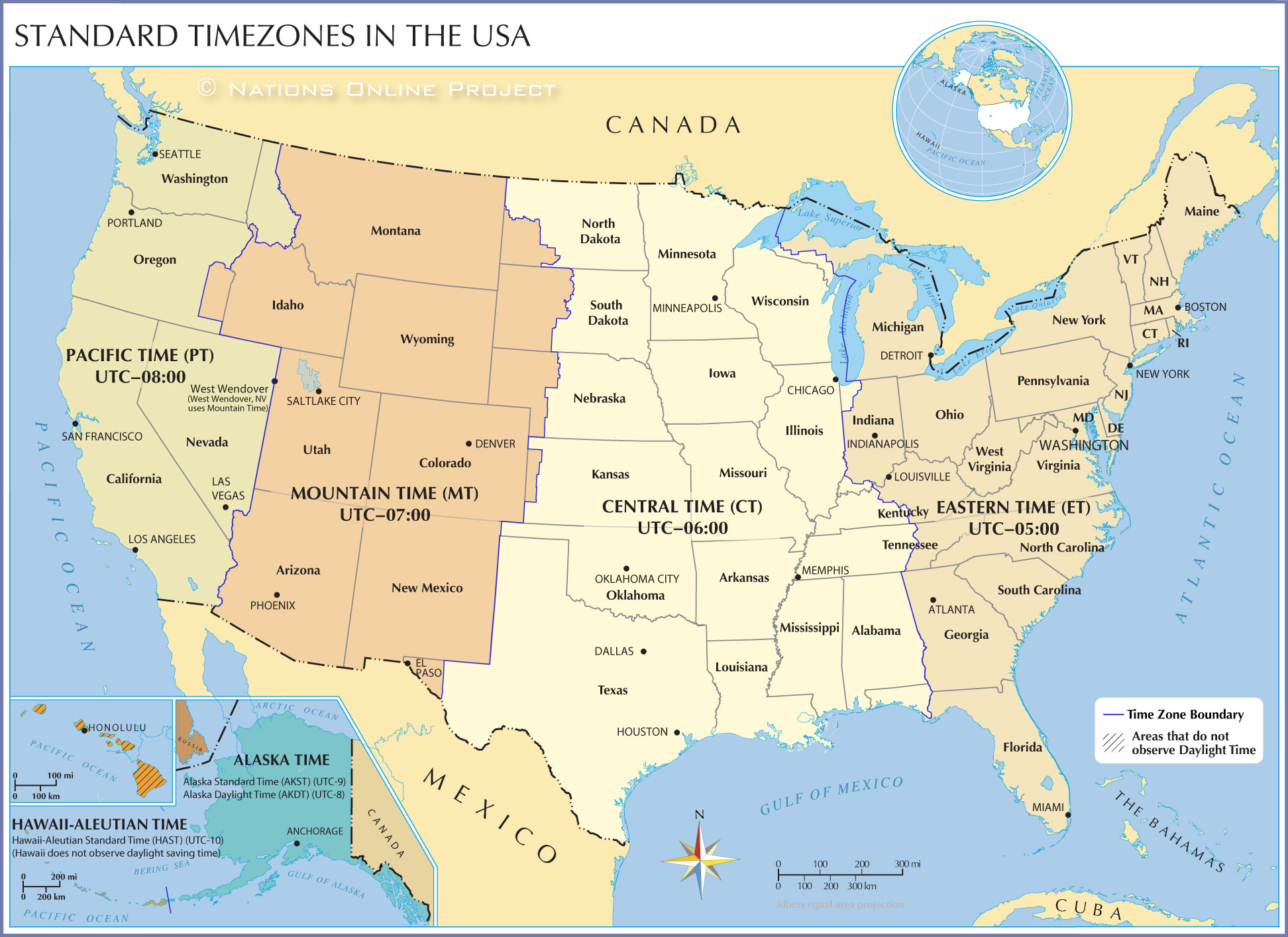 U.S. Time Zone Map
The map shows the six time zones into which the United States is divided. The territory of the 50 US states extends over eight standard time zones, from UTC (GMT) −4 to −11 hours. There are six designated US time zones; and there are four time zones in the contiguous USA.

The US time zones are (from west to east):


UTC: Coordinated Universal Time
Time zones around the world are expressed as positive or negative offsets from UTC or GMT (arguably the same as Coordinated Universal Time). Local time is UTC and the time zone offset for that location, e.g., Eastern Standard Time (EST) = UTC −5 hours.
UTC replaced Greenwich Mean Time on 1 January 1972 as the basis for the main reference time scale or civil time in various regions.


Alaska
Most of Alaska is in the Alaska Time zone (UTC − 9 h). The Aleutian Islands, a chain of volcanic islands extending southwest from the Alaska Peninsula, are in the Hawaii–Aleutian Time Zone (UTC − 10 h).

Arizona
For about half a year, all of Arizona is in the same time zone, Mountain Time (UTC - 7 h), but the state does not observe Mountain Daylight Time (UTC - 6 h); only the Navajo Nation in the northeastern part of the state does.

Florida
Florida is in two time zones. The western part of Florida (the panhandle south of Alabama) is in the Central Time zone (UTC − 6 h); the rest of the peninsula uses Eastern Time (UTC − 5 h).

Indiana
Most of Indiana is in the Eastern Time zone (UTC − 5 h); only some counties in its western corners adhere to Central Time (UTC − 6 h).

Kansas
Most of Kansas has Central Time, with only the four counties of Sherman, Wallace, Greeley and Hamilton on the Colorado border having Mountain Time.

Kentucky
Eastern Time is in effect in about 60% of Kentucky; the rest in the west observes Central Time.

Michigan
Most of Michigan is in the Eastern Time Zone (UTC − 5 h), with only four counties (Gogebic, Iron, Dickinson, and Menominee) bordering Wisconsin in the southern part of the Upper Peninsula having Central Time.

Nebraska
The western third of Nebraska lies in the Mountain Time zone, the eastern two-thirds in Central Time.

Nevada
Nevada is located in the Pacific Time Zone. The town of West Wendover is the only part of Nevada that is legally in the Mountain Time zone, as it is closely associated with Utah.

North Dakota
Up to about the Missouri River, North Dakota's southwestern corner is in the Mountain Time zone. The eastern part of the state is in the Central Time Zone.

Oregon
While most of Oregon is in the Pacific Time Zone, most of Malheur County is on mountain time because it is economically connected to neighboring Idaho.

Tennessee
There are two different time zones in Tennessee. The larger western part is in the Central Time Zone, while East Tennessee in the Appalachian Mountains is located, except for three counties, in the Eastern Time Zone.

Texas
Almost everything in Texas is in Central Time; only two counties in one corner of the west, El Paso and Hudspeth observe Mountain Time. 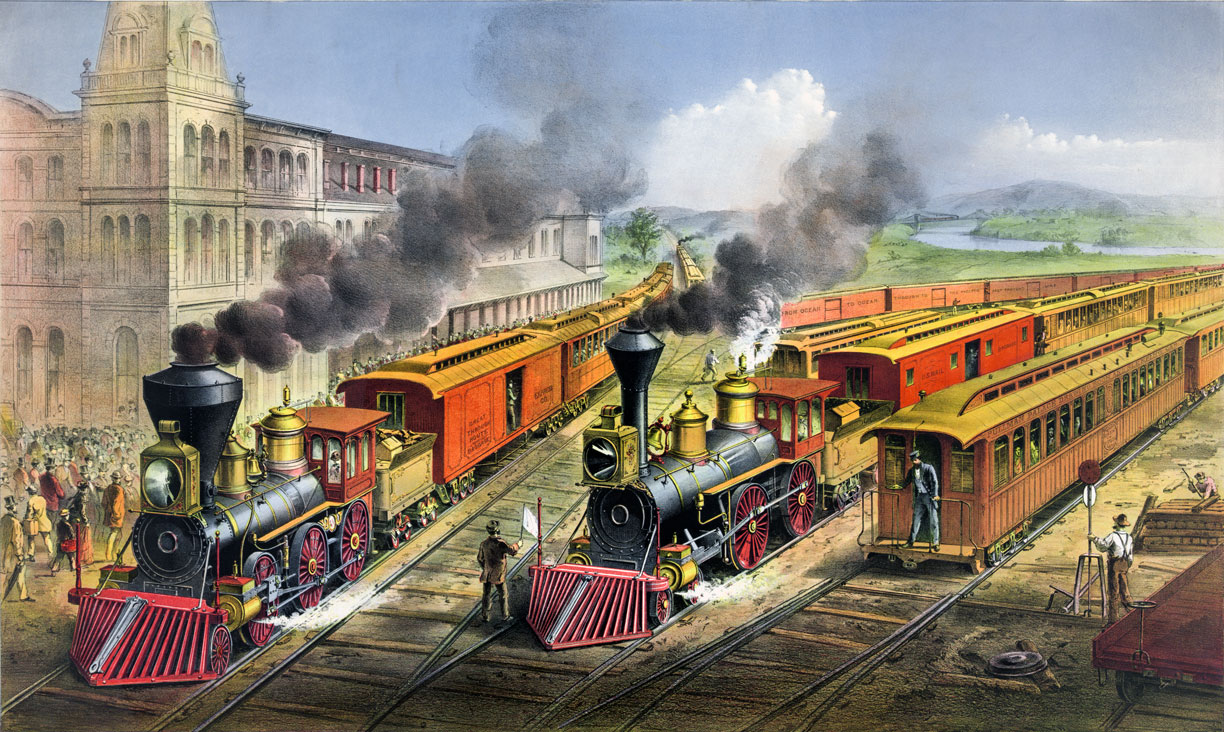 One of the driving forces behind the development of time zones was the increasing use of faster modes of transportation in the late 19th and early 20th centuries. In the US, much of the national rail network was completed by 1900.
Image: American railroad scene: lightning express trains leaving the junction (Currier & Ives, 1874; New York)


As is well known, Earth is a sphere that is supplied with light and heat by the sun. Due to Earth's spherical shape, the sun's rays are most intense at the location nearest to the sun.

According to an ancient tradition, when on earth the sun is at its highest it is 12 o'clock, noon -- time for lunch.
Since the earth rotates on its axis, it is not also noon in other parts of the globe, but morning or evening or night.

Before the Industrial Revolution, when life was dominated by farming and artisan crafts, the times to sow, fertilize and harvest were important.

With the progress of technology and the sciences and as the world moved closer together through ever faster means of transport such as steamships and the railroad, people started to think about how to get the time problem under control.

Time zones are an invention of modern time. Before the creation of standard time zones, every place had its own time. With the spread of the telegraph and the construction of railroad networks in the 19th and early 20th centuries, communication and travel gained new dimensions - and new problems. Due to the lack of time standardization, it was difficult to coordinate train schedules on the mostly single-track lines; a signal at the wrong time could lead to fatal collisions.

However, the impetus for the introduction of standardized time did not come from the railroads alone. Astronomers and geophysicists, seeking simultaneous observations from scattered geographic locations, had long advocated a uniform time. [LoC]

Before the introduction of time zones, there were between 140 and 300 different local time zones in North America. As the story goes, a missed train in Ireland by Sandford Fleming led eventually to the creation of a coordinated Universal Time for the whole planet. Fleming, a Scottish-born Canadian engineer, was one of the leaders in the effort to develop a worldwide system of keeping time. He proposed a system of time zones in 1879 and presented it at several international conferences.
The British already had a standardized time. In 1847, the national Railway Clearing Union ordered that Greenwich Mean Time (GMT) should apply at all railroad stations. The British Post Office transmitted time signals from Greenwich by telegraph to most parts of the country to set the clocks.
Since 1875, Cleveland Abbe, an astronomer, meteorologist, and the first head of the U.S. Weather Bureau, had lobbied the American Meteorological Society (AMS) for a uniform standard time.
In October 1884, the International Meridian Conference was held in Washington, D.C., "for the purpose of fixing upon a meridian proper to be employed as a common zero of longitude and standard of time-reckoning throughout the globe."
The standard timekeeping system associated with this arrangement of time zones was officially established in the United States by Congress in March 1918.
On 1 January 1960, Coordinated Universal Time (UTC), the international basis of civil and scientific time, was introduced. The unit of UTC is the atomic second. UTC replaced Greenwich Mean Time (GMT), based on the motion of the Earth, as the World Standard for time in 1972.

More about the United States:

Capital Cities of the USA

Outline Map of the United States

Searchable map and satellite view of the United States