The Claiborne Pell Bridge (Newport Harbor Light to the left), the suspension bridge traverses the East Passage of the Narragansett Bay connecting Newport on Aquidneck Island (Rhode Island) with Conanicut Island. The bridge looks good, but according to the U.S. Department of Transportation, Rhode Island's bridges are the worst in the nation. [1]
Image: © Ad Meskens 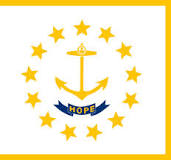 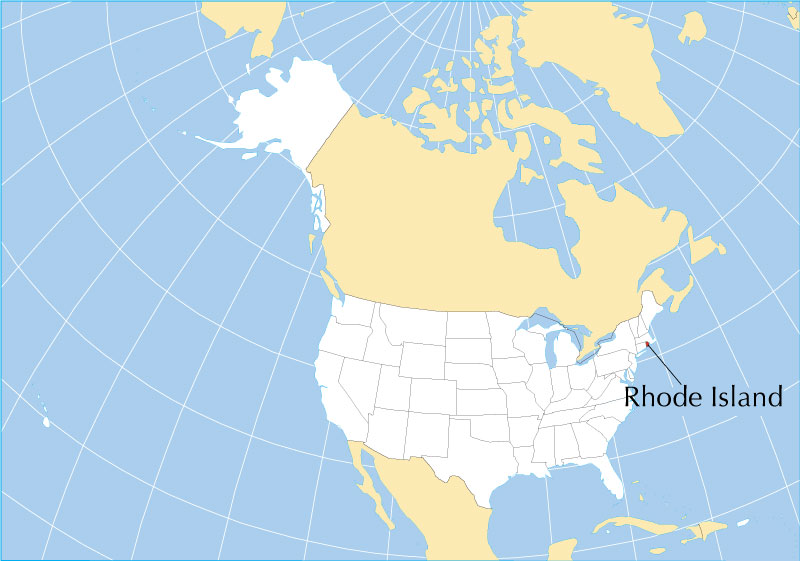 Rhode Island, officially the State of Rhode Island and Providence Plantations, is not an island. It is the smallest of the 50 US states by area and situated on the East Coast of the United States in the New England Region. Compared, it is just about twice the size of the city of Phoenix in Arizona.

Rhode Island has land borders with only two other states, on the north and east with Massachusetts and in the west with Connecticut. In the south, RI is bounded by the straits of Block Island Sound and Rhode Island Sound. It shares a short maritime border with New York State between Block Island, RI and Long Island, NY. Narragansett Bay, an inlet of the Atlantic Ocean, extends deep into the southeastern portion of Rhode Island. 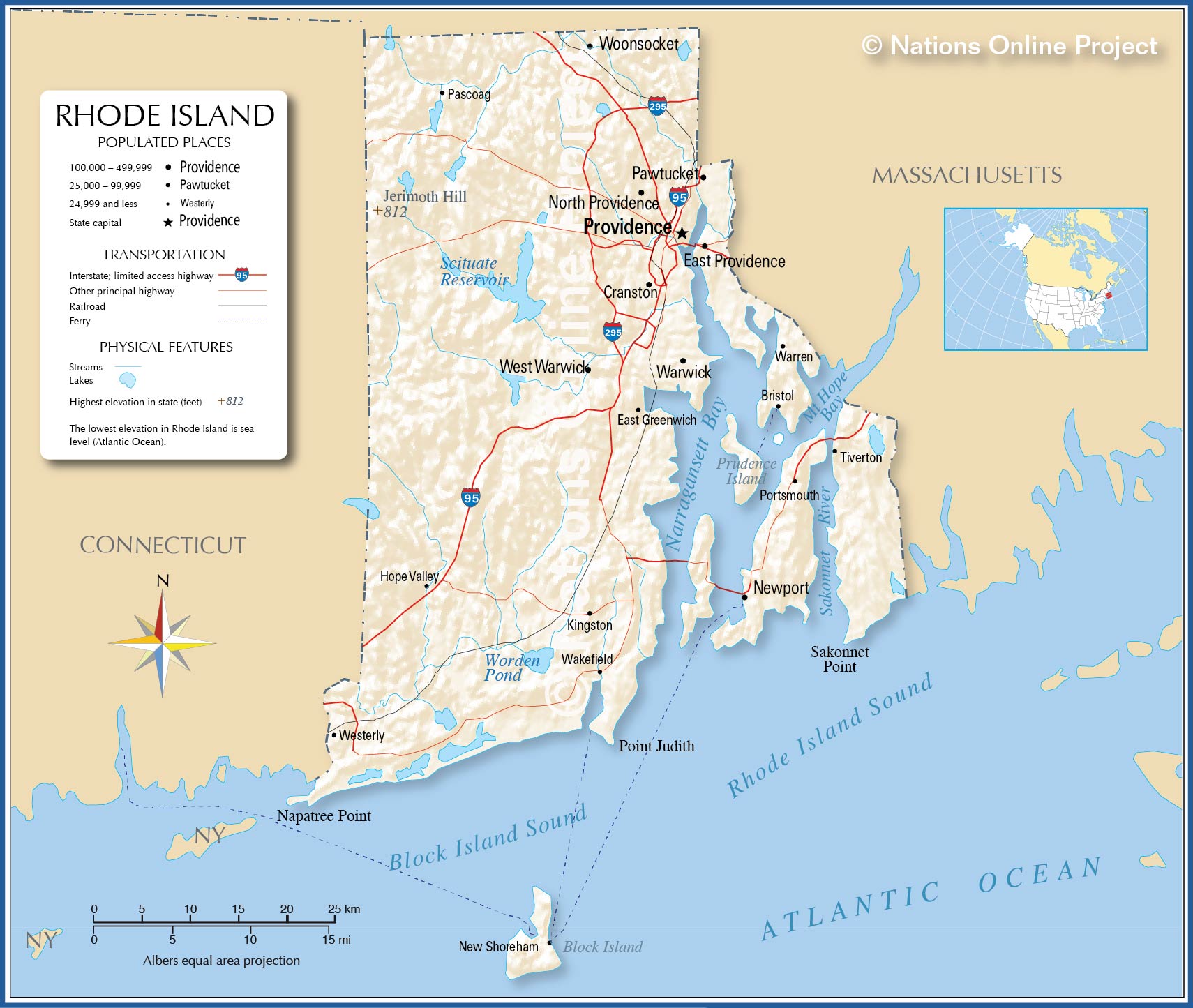 The detailed map shows the US state of Rhode Island with boundaries, the location of the state capital Providence, major cities and populated places, rivers and lakes, interstate highways, principal highways, and railroads. 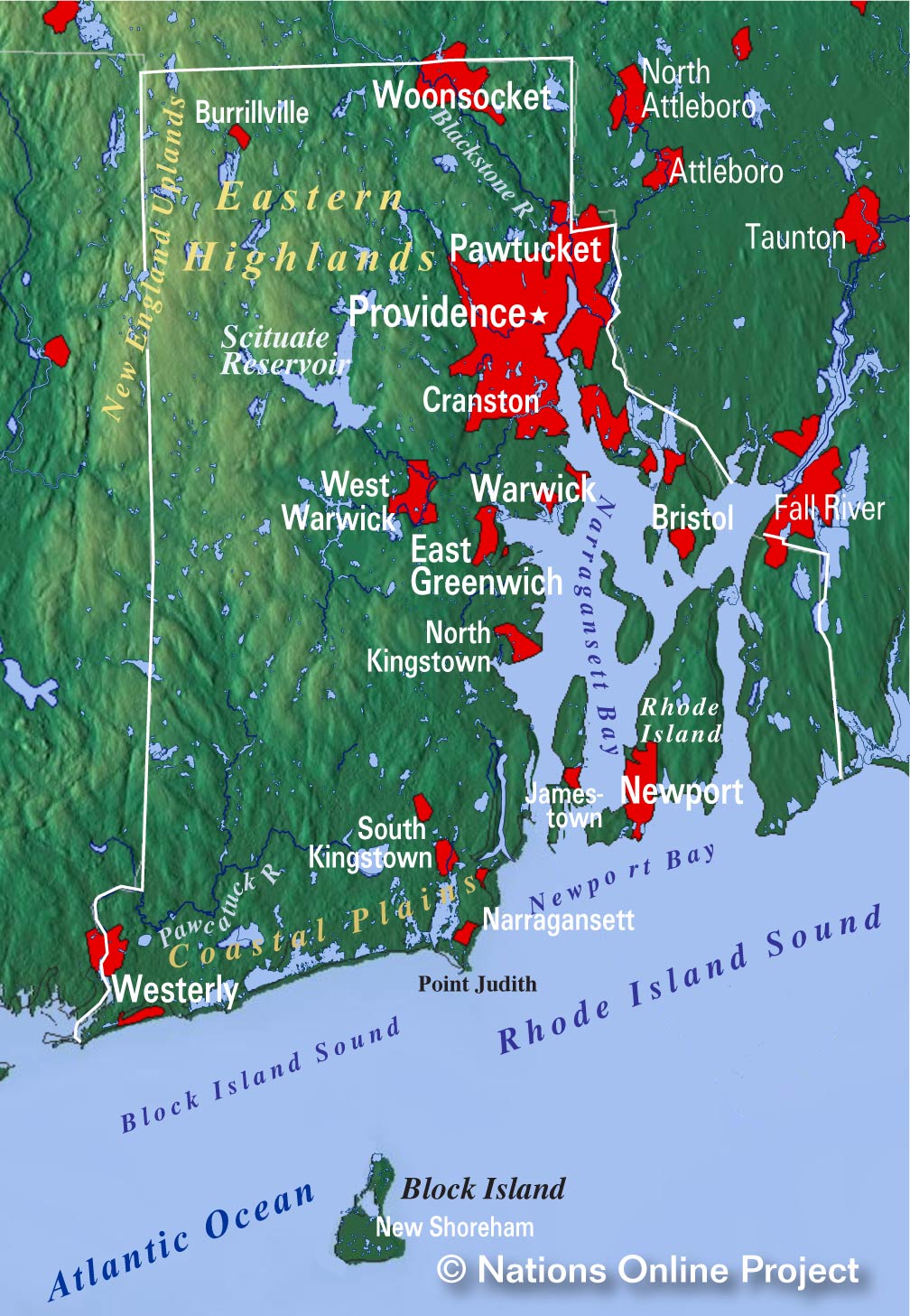 The Colony of Rhode Island and Providence Plantations was created in the 17th century. English colonists first settled on present-day Aquidneck Island (Rhode Island) in the 1630s.

Nearly one and a half century later, in 1776, the colony declared independence from the British Crown as the first of the thirteen original American colonies. However, it was the last to sign the Constitution, so it became the 13th constituent US state.

Rhode Island covers a total area of 3,999 km² (1,544 sq mi), [2] a third of which is water (1,324 km² or 511 square miles).
This feature might be the reason for its official nickname "The Ocean State," the other one is 'Little Rhody.' It is the smallest US state by area. Compared with other US states, Rhode Island would fit into New Jersey seven times and into Texas 222 times.

The geography of Rhode Island consists of two principal regions: the southern and eastern Coastal Lowlands and the Eastern New England Upland (ENEU), also known as the Eastern Highlands, in the northwest.
More than half of the state is covered with forests. 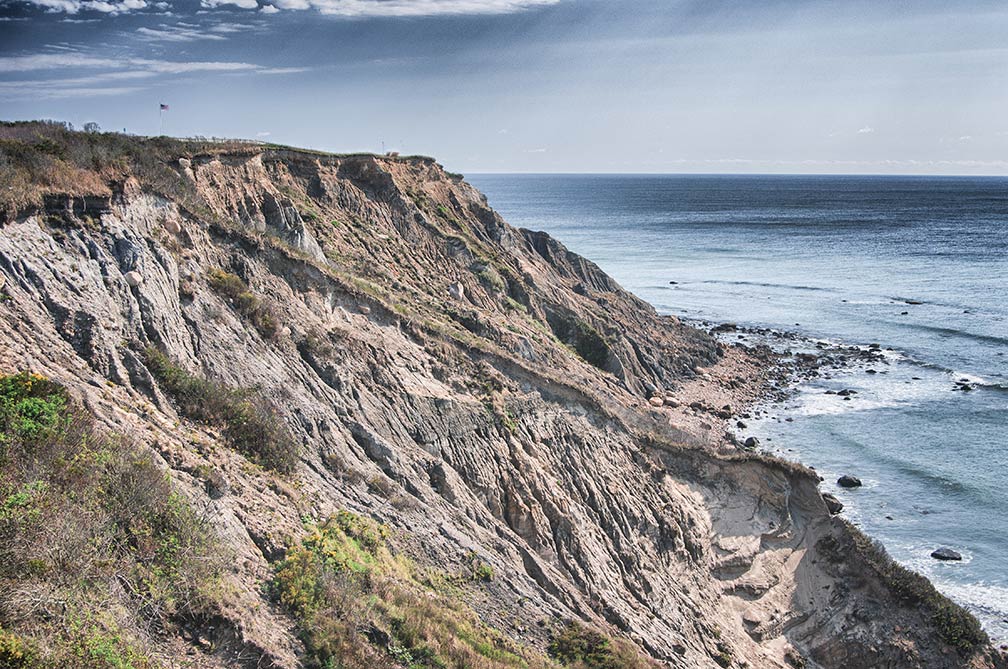 Mohegan Bluffs, clay cliffs on the southern shore of Block Island.
Image: Rob Weir
The Ocean State's four main islands are Aquidneck Island, officially Rhode Island, which is the largest island of Narragansett Bay and belongs to Newport County. About 60,000 people live on Aquidneck. The largest town on the island is Newport, the rest of the population is divided between the communities of Middletown and Portsmouth.

Conanicut is the second-largest island in Narragansett Bay; the Newport Bridge connects Conanicut with Aquidneck Island and Newport.


The third-largest island in Narragansett Bay is Prudence, which features some summer colonies. Block Island lies about 16 km south of the coast of the mainland.


Rivers
Major rivers are the Pawcatuck River, which flows into the Little Narragansett Bay, its source is Worden Pond. The Wood River is a major tributary of the Pawcatuck River. The North Branch Pawtuxet River feeds the Scituate Reservoir. The Blackstone River was once the most polluted in the country. The Sakonnet River is an estuary or tidal strait which runs north to south, east of Aquidneck Island. 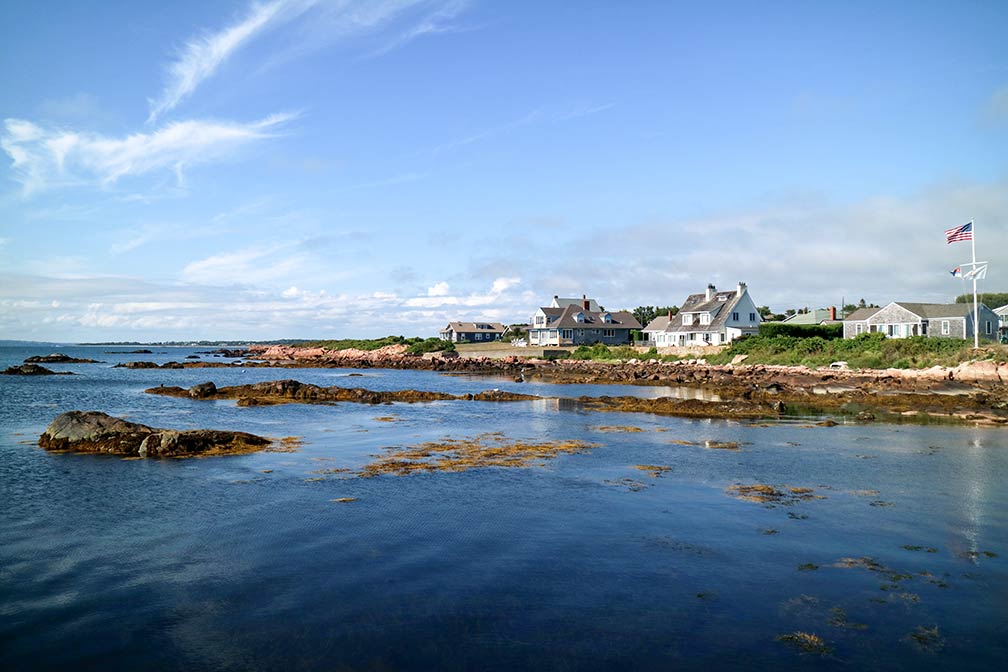 Rhode Island is home to more than 200 inland ponds and lakes of varying sizes, most of them human-made. The largest inland body of water is the Scituate Reservoir fed by precipitation and several streams; it is the primary drinking water supply for the city of Providence and surrounding towns.

Worden Pond is a medium-sized natural freshwater lake in Washington County; it is the source for the Pawcatuck River. Ninigret Pond is the largest of the nine lagoons, or "salt ponds," in southern Rhode Island, other major salt ponds are Potter Pond, Point Judith Pond, Trustom Pond, Green Hill Pond, Quonochontaug Pond, and the Winnpaug Pond.


Highest point
Rhode Island's landscape is quite flat; it has no real mountains. The state's highest natural point is Jerimoth Hill at 247 m (812 feet) above sea level within the New England Upland in Western Rhode Island. 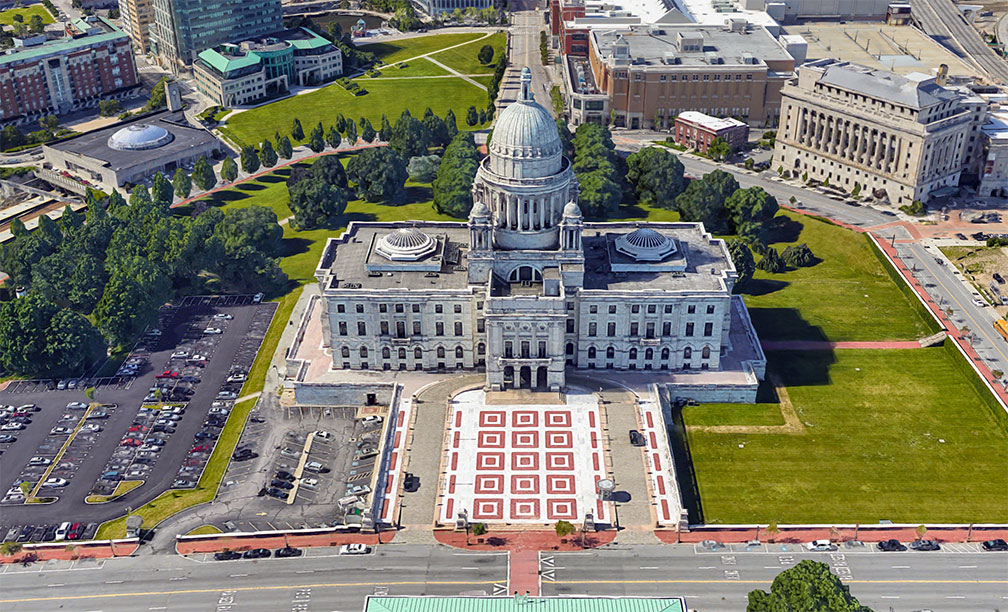 Rendered image of Rhode Island State House. The Capitol of Rhode Island is a neoclassical style building that houses the Rhode Island General Assembly and the offices of the governor.
Image: Google
Rhode Island is heavily urbanized in its eastern half, with the exception of a portion of Newport County between the Sakonnet River and the Massachusetts state border. It is the second-most densely populated state in the US (after New Jersey), with a population of 1,059,300 people (43rd in the US; 2019 est.). [3]

The largest city and state capital is Providence (pop. 180,000, in 2019), the largest urban area is Providence-Warwick, RI-MA Metro with a population of 1.6 million people, approximately 600,000 inhabitants more than Rhode Island itself, because of the metro's expansion into southern Massachusetts.

Cities and Towns in Rhode Island 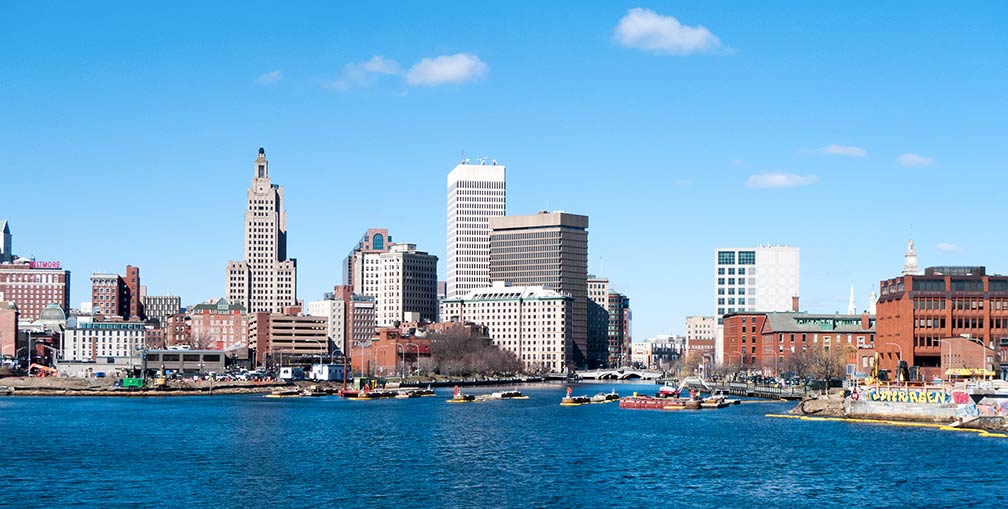 Other cities and towns in Rhode Island:

More about Rhode Island and the US