Satellite View and Map of the City of Indianapolis, Indiana

The satellite view shows Indianapolis, the seat of Marion County, the most populous city and the capital of the State of Indiana in the

United States. The metropolis lies in the East North Central region of the Midwestern United States, about 100 mi (160 km) north-west of Cincinnati and 163 mi (260 km) south-east of Chicago. The center of the city is located on the eastern bank of the White River, near the site where the Fall Creek meets the White River. 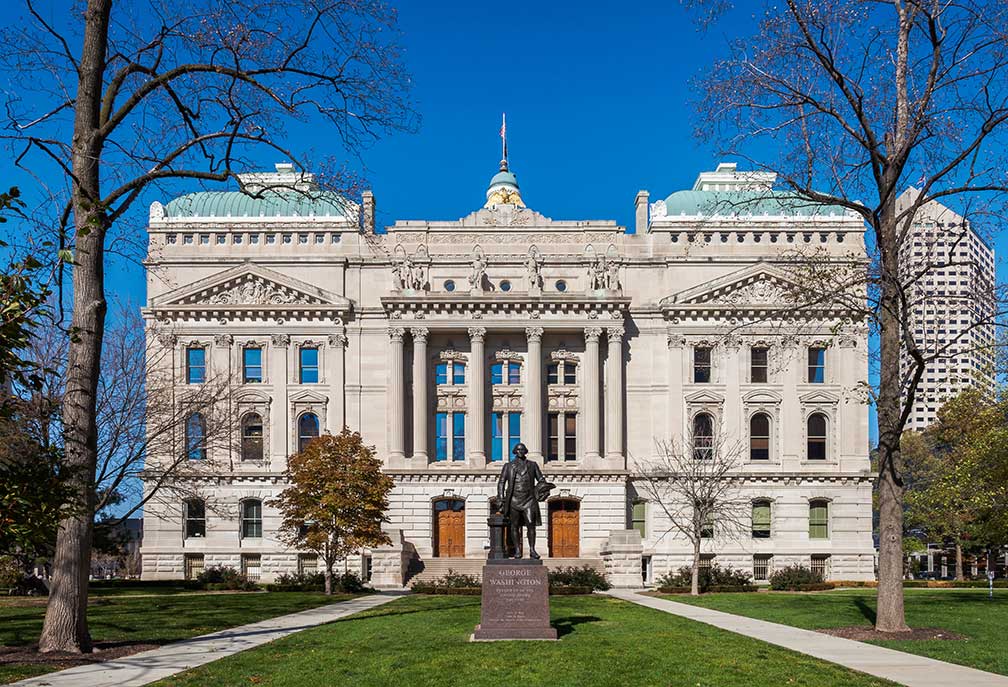 Front view of the State Capitol building with the statue of George Washington. The building houses the Indiana General Assembly, the office of the Governor of Indiana, and the Supreme Court of Indiana.
Image: Diego Delso

The Hoosier State has just been in existence for about four years when in 1820 the General Assembly of Indiana authorized a selection committee to search for a permanent site for the new state capital. The committee decided in favor for a location along the west fork of the White River, near Indiana's geographic center.

The idea was to use the river as a route of transport; unfortunately, the river turned out to be too shallow for shipping traffic.
Anyway, Indianapolis was founded in 1821, it became officially Indiana's state capital in 1825.


Population
Today the city has a population of about 863,000 inhabitants (in 2017), more than 2 million people live in Greater Indianapolis (Indianapolis-Carmel-Anderson, IN Metro Area). 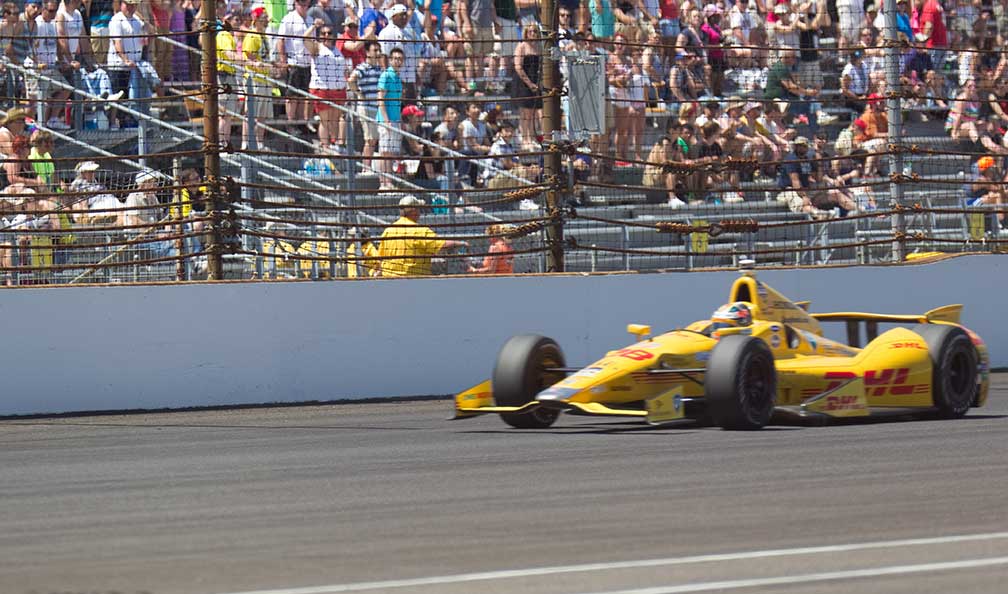 Ryan Hunter-Reay was the winner of the Indianapolis 500 (Indy 500 in 2014) on Indianapolis Motor Speedway.
Image: Robert Rescot


Indianapolis is most famous for its motor racing events like the annual Indy 500 at the Indianapolis Motor Speedway; it is the largest single-day sporting event in the world.

One of the city's unique feature is the Indianapolis Cultural Trail (indyculturaltrail.org), an urban bike and pedestrian path that connects the city's six Cultural Districts, neighborhoods and entertainment facilities. The trail links the Fountain Square neighborhood with the downtown area, the refurbished Indiana Central Canal and the White River State Park with the formerly African-American district of Indiana Avenue and with the city's premier arts and entertainment area of Wholesale District.

Places:
Monument Circle, the very center of Indianapolis' is a circular, brick-paved street that surrounds the Soldiers' and Sailors' Monument; it is the public gathering place in Indianapolis. 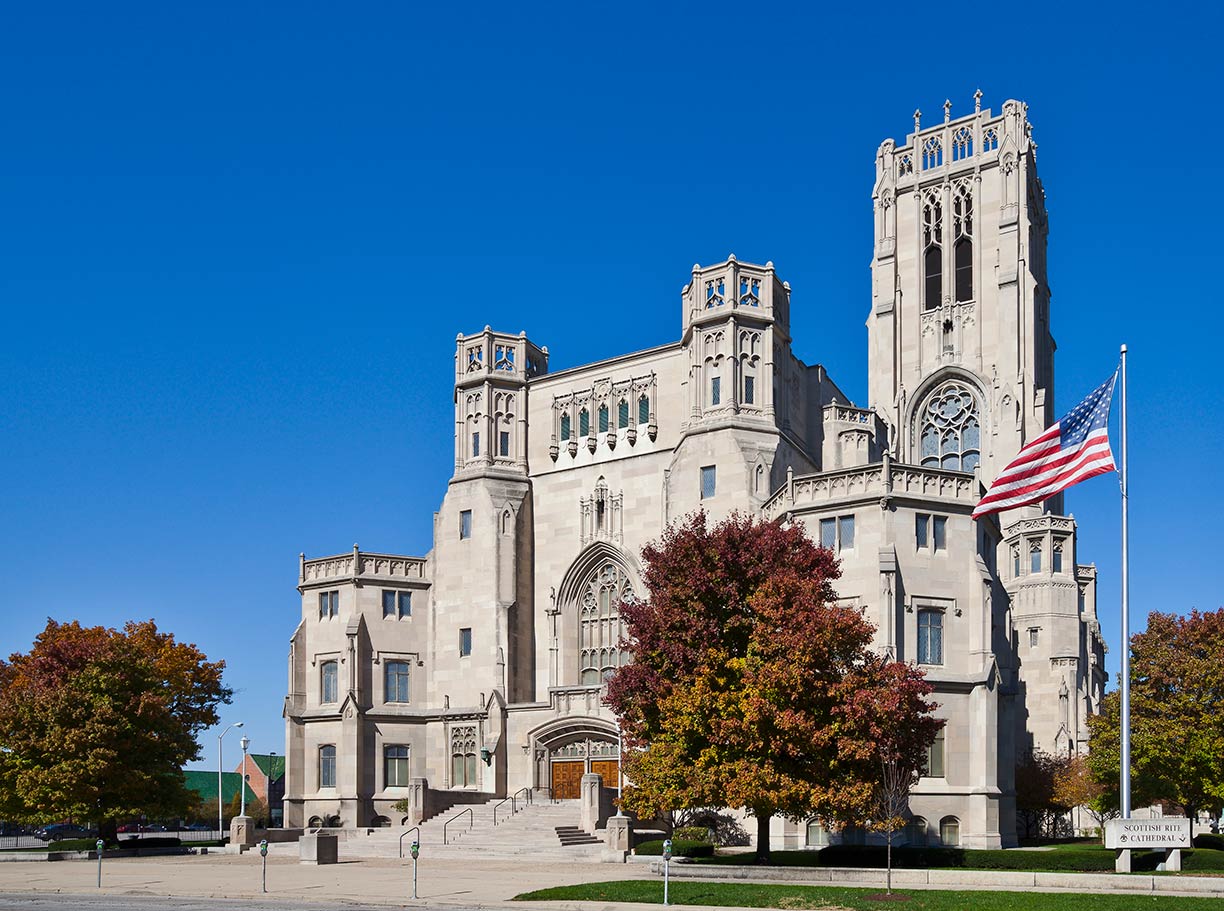 Indiana World War Memorial Plaza, a five-city-block plaza with the Indiana World War Memorial, a monument for fallen soldiers. The square shrine building with a pyramidal dome houses a military museum, a Shrine Room, and an auditorium.
Nearby is the Soldiers' and Sailors' Monument (www.in.gov/iwm/2335.htm), the obelisk-shaped column with a Victory statue on top is the iconic symbol of Indianapolis. The neoclassical monument was built between 1889 and 1902 to commemorate the Hoosiers who served in the Revolutionary War. The interior of the monument houses the Colonel Eli Lilly Civil War Museum, related to Indiana's history during the American Civil War.

Indiana Historical Society (indianahistory.org), one of the United States' oldest and largest historical societies, the IHS maintains exhibits, a research library, and archives related to the history of Indiana and the Old Northwest.

Indiana State Capitol, Indiana's fifth statehouse was completed in October 1888. Since then the new capitol building houses the Indiana General Assembly, the office of the Governor of Indiana, and the Supreme Court of Indiana.

Indiana Central Canal is the relict of a mistaken investment, today the Canal Walk promenade is a popular recreation area along the waterway.

Broad Ripple Village, an active social scene, art galleries, bars, and restaurants cater to the predominantly student population; it is one of the seven designated cultural districts in Indianapolis.

Scottish Rite Cathedral is a historical Neo-Gothic Freemason building with an auditorium and a ballroom. One of the largest Masonic buildings in the US was constructed between 1927 and 1929. There are over 2 million Freemasons in North America. [1]

Churches:
Christ Church Cathedral (www.cccindy.org), is the cathedral for the Episcopal Diocese of Indianapolis, the church was built on Monument Circle in 1857.
St. John the Evangelist Catholic Church (www.stjohnsindy.org), the French Gothic Revival church is the house of prayer of the oldest Catholic parish in the city. 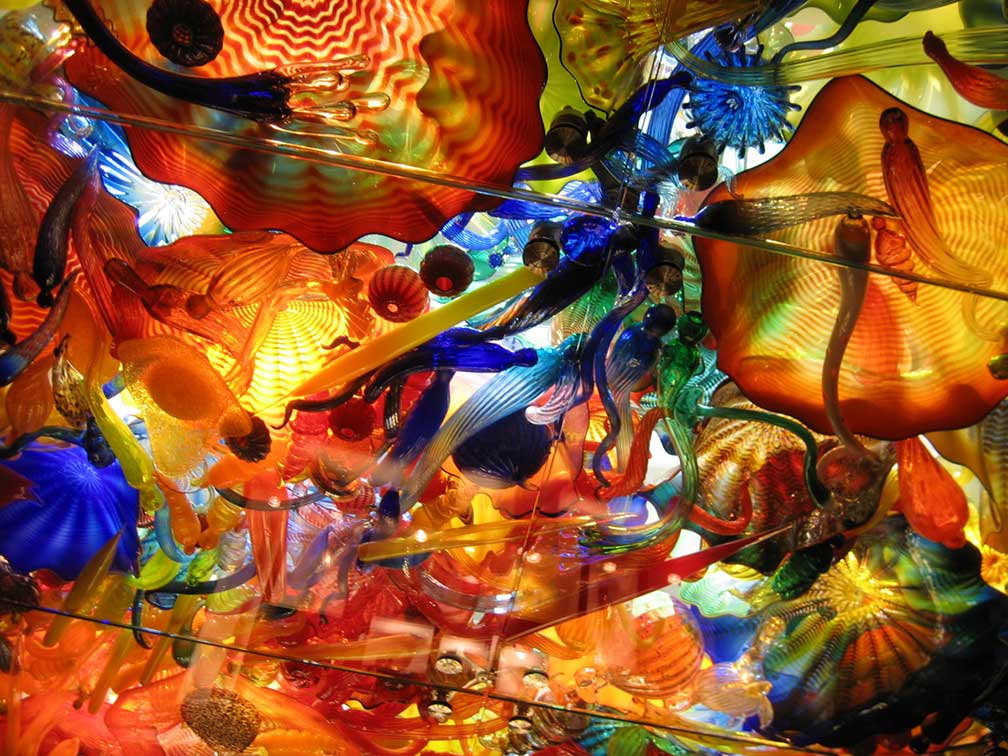 Fireworks of Glass, an artwork by Dale Chihuly in the Children's Museum of Indianapolis.
Image: Chris Huffman

Indianapolis Motor Speedway Museum (indyracingmuseum.org) is an automotive museum situated inside the premises of the Indianapolis 500 track; the museum also houses the Auto Racing Hall of Fame.

Performing arts:
The Indiana Theatre was formerly a movie palace and ballroom built in 1927; today it is home to the Indiana Repertory Theatre (www.irtlive.com), the city's regional theater.


Parks:
Indianapolis Zoo (www.indianapoliszoo.com) a zoo, an aquarium, and a botanical garden.

White River State Park (www.whiteriverstatepark.org) a public park on the fringes of downtown and one of the city's seven designated cultural districts.

Eagle Creek Park (eaglecreekpark.org) is the city's the largest park and a nature reserve; it consists of 3,900 acres of woods, meadows, and ponds.

Holliday Park is a public city park with a giant playground, hiking trails, and an arboretum.


Sports:
Indianapolis Motor Speedway
(www.indianapolismotorspeedway.com) home of the Indianapolis 500 and the Brickyard 400),

Bankers Life Fieldhouse
(www.bankerslifefieldhouse.com) an indoor arena and home of the Indiana Pacers and the Indiana Fever basketball teams.

Lucas Oil Stadium
(www.lucasoilstadium.com) is a multi-purpose stadium and home field of the NFL's Indianapolis Colts.

The Map shows a city map of Indianapolis with expressways, main roads, and streets, zoom out to find Indianapolis International Airport (IATA code: IND) located 12.6 mi (11 km) by road (via I-70 W) southwest of the central business district.
To find a location use the form below.

More about Indiana and the US