Wonder Lake in Alaska's Denali National Park with Mount Denali in background. Denali (Mount McKinley) is the highest mountain peak of the United States and in North America.
Image: BillC 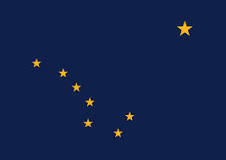 Where in the United States is Alaska? Location map of the State of Alaska in the US.

The largest US state occupies a huge peninsula in the extreme northwest of North America, with coastlines on the Arctic and North Pacific oceans and on the Chukchi and the Bering Seas. The state is separated from the contiguous 48 US states by Canada and by the Bering Strait from Russia.
Alaska is one of two US states not bordered by another state, Hawaii is the other.

Alaska is bordered by Canada (by the Canadian provinces of Yukon Territory and British Columbia) to the east, and it shares a maritime border with Russia to the west. The state's nickname is "The Last Frontier."


Some History
The history of Alaska dates back to the Upper Paleolithic period. Genetic findings suggest that a single population of modern humans migrated from southern Siberia toward the landmass known as the Bering Land Bridge as early as 30,000 years ago. 16,500 years ago, people moved further into the Americas. [1]
Because the Bering Land Bridge is now under water, archeological artifacts are practically nonexistent. However, archeologists have discovered artifacts on land that provide evidence of human activity in North and South America dating roughly 12,000 years ago.


At the time of European contact by Russian explorers in the mid-18th century, the area was populated by tribes of Alaskan Native people.
Alaska was a Russian colony from the 1740s until 1867, when the territory was bought by the US from the Russians. Admission to the Union was on the 3rd January 1959; Alaska was admitted as the 49th state.

After oil was discovered in 1968, a pipeline was completed in 1977 to transport that oil from the North Slope to Valdez, a former gold rush town which became an important port city in Alaska.

The detailed map shows the US state of Alaska and the Aleutian Islands with maritime and land boundaries, the location of the state capital Juneau, major cities and populated places, rivers and lakes, highest mountains, interstate highways, principal highways, ferry lines, and railroads.


Area
The state covers an area of 1,723,337 km² (665,384 sq mi) [2] and is the largest of all US states. By comparison, Alaska is three times the size of the Iberian Peninsula, compared to other US states, Alaska is 2.5 times the size of Texas, and New Jersey would fit in 76 times.
The U.S. federal government owns and manages approximately 65% of the state as public lands, including 24 national parks, 16 wildlife refuges, and two national forests.


Population
Alaska is among the least populated states in the US. In mid-2018, less than 740,000 people were residents of Alaska. The capital city is Juneau. Spoken languages are English and 20 indigenous American languages.


Climate
A tundra climate dominates the northern third with temperatures around freezing point, causing permafrost to prevail (the ground stays frozen all year long.) The southern parts of Alaska are mainly characterized by a subarctic climate with very cold winters, and short, cool to mild summers. 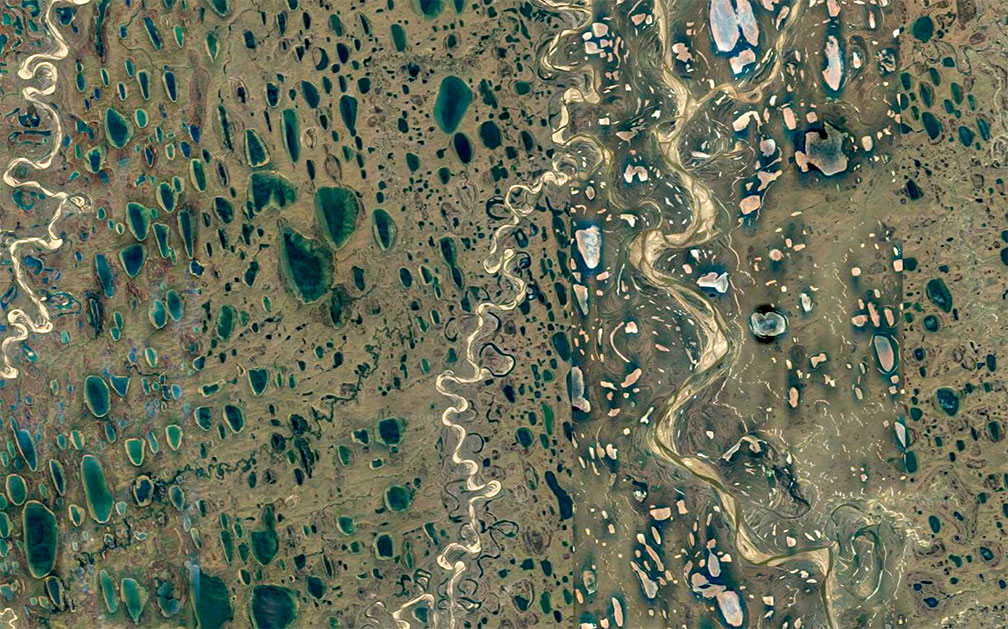 A work of art. Satellite view of permafrost thaw ponds and rivulets in the great expanse of flatlands north of the Brooks Range in Alaska's Far North. (click image to enlarge)
Image: Google, Digital Globe, Copernicus

Alaska's Regions
Alaska is divided into five major regions (from north to south):


1. The Far North or Arctic Alaska is a vast area roughly between the Yukon River and the Arctic Ocean. Various Alaskan Natives originally inhabited the region; they lived from hunting and fishing.

Along the coast of the Arctic Ocean stretches the flat, boggy coastal plains, known as the Arctic coastal tundra, an ecoregion of solid permafrost characterized by poor drainage with many thaw lakes and ponds which cover up to 50 percent of the surface.

South of the gradually rising plains dominates the Brooks Mountain Range (Athabaskan Gwazhał) the landscape. The mountains extend over 1,100 km (700 miles) in a slight arc from west to east; the mountain peaks reach altitudes of between 1,500 and 2,700 m. Mount Isto with 2.735 m is its highest peak.

Most of Arctic Alaska lies within the Arctic Circle. The area offers midnight sun in the summer and polar nights in winter, the aurora borealis or "northern lights" may be seen between late August and April.

2. The wilderness area of the Interior in central Alaska south of the Brook Range is centered around Fairbanks, the largest city in the Interior, and bounded by the Alaska Range in the south. Native Athabaskan people, a hunter-gatherer society, originally inhabited the region. 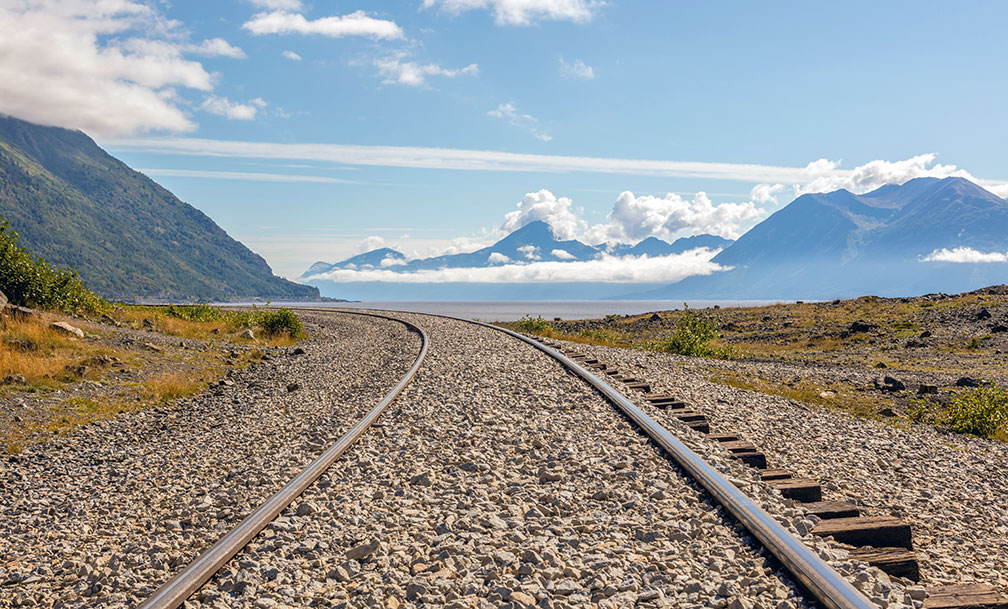 Scenery near Beluga Point Lookout south of Anchorage; the Turnagain Arm (Gulf of Alaska) in background, seen from the rail tracks of the Alaska Railroad.
Image: Diego Delso

4. Southcentral Alaska is situated roughly between the Alaska Range and the south coast at the Gulf of Alaska. Centered around Prince William Sound. The terrain is subdivided into the Mat-Su Valley (Matanuska-Susitna), the Copper River Valley, the Anchorage Area, and the Kenai Peninsula.

5. The Alaskan portion of the Inside Passage, (aka the Alaska Panhandle, aka Southeast Alaska), is situated to the southeast of mainland Alaska. The panhandle extends 840 km (520 mi) from northwest to southeast, south of Canada's Yukon Territory and British Columbia along the Gulf of Alaska. Its rugged landscape offers intricate fjords, glacier shaped mountains and valleys, sparkling blue and white icefields which generate glacier, and temperate rainforests. 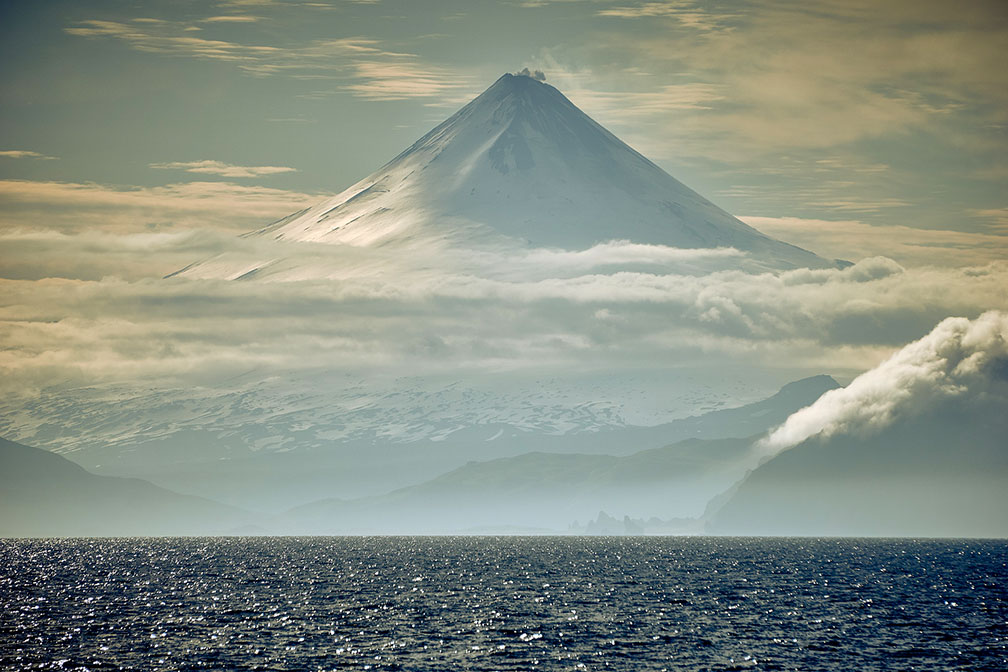 Shishaldin, an active volcano on Unimak Island in the Aleutian Islands. It is probably the most symmetrical cone-shaped glacier-clad large mountain on the planet.
Image: naql

When the United States bought Alaska from the Russians for $7.2 million, the package included all ten of the USA's highest mountains. 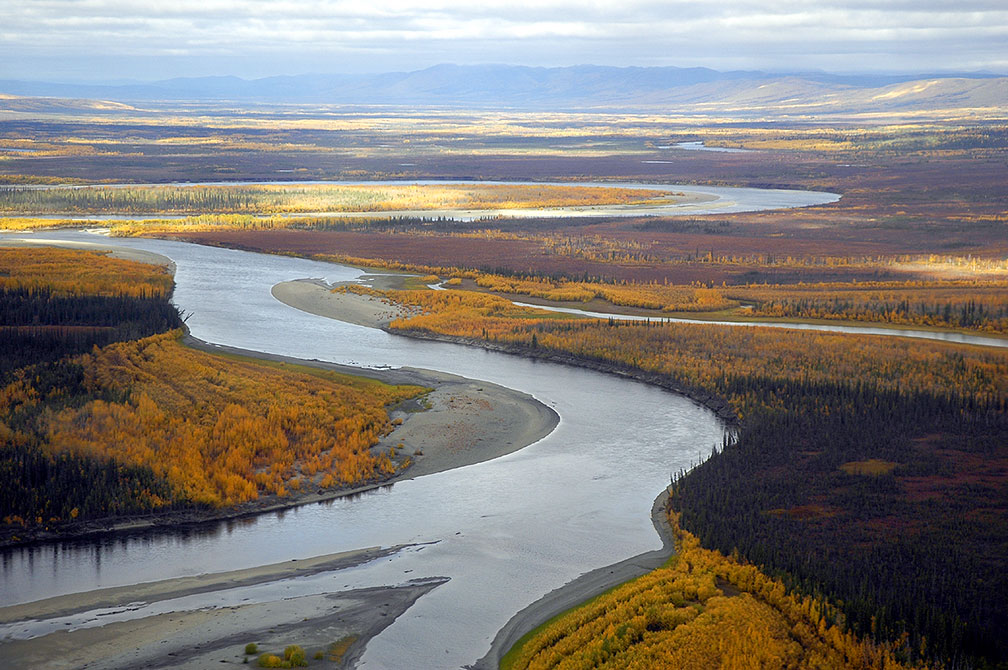 Koyukuk River in the Kanuti National Wildlife Refuge in late summer. The Koyukuk is a tributary of the Yukon River.
Image: Bill Raften


Alaska's chief river is the Yukon, its source is in British Columbia, Canada and empties into the Bering Sea. The river flows for 3,017 km (1,875 mi) within Alaska and has a total a length of 3,698 km (2,298 mi). The Yukon ranks third in length of all US rivers, behind the Mississippi and Missouri.
Major tributaries of the Yukon in Alaska are the Porcupine, the Tanana, and the Koyukuk rivers.


Alaska's other big rivers are the Colville River, one of the northernmost major rivers in North America empties into the Beaufort Sea (Arctic Ocean). 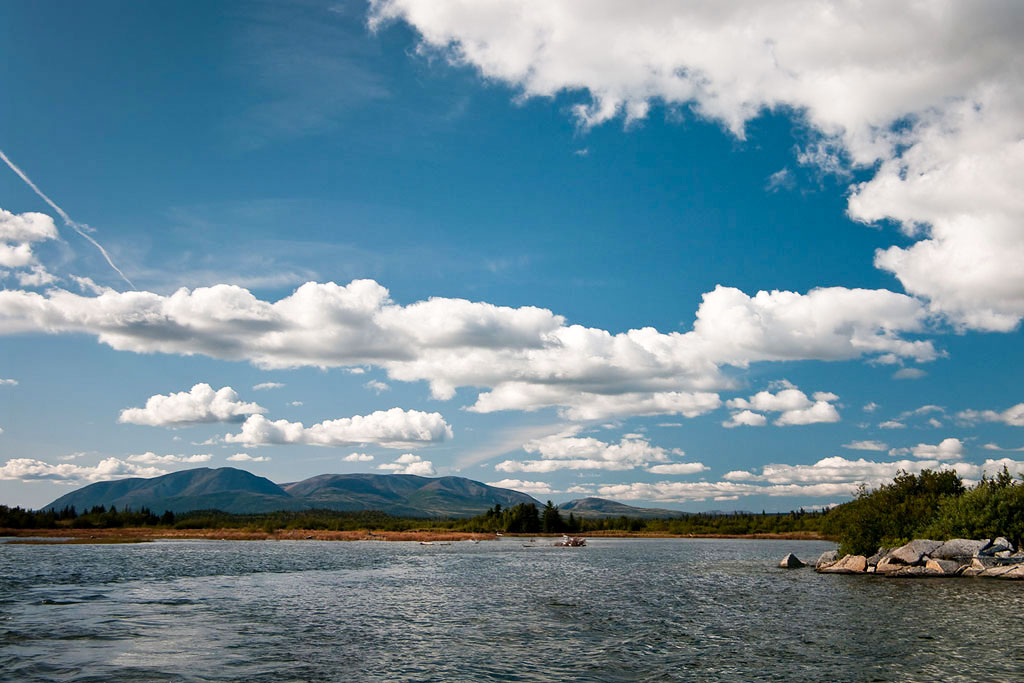 View of Iliamna lake situated at the northern end of the Alaska Peninsula; it is the largest natural freshwater lake in the state with a surface area of almost 3,000 km².
Image: Vlad Karpinskiy


The Noatak is a river north of the Arctic Circle. A long section of the Noatak is part of the National Wild and Scenic Rivers System.


The 450 km (280 mi) long Kobuk River in the Arctic region in northwestern Alaska empties into the Kotzebue Sound.


The Kuskokwim in the southwest of the state provides major drainage for a large area of the Alaska Interior and empties into the Kuskokwim Bay on the Bering Sea.


The Susitna River, the "sandy river" empties into the Cook Inlet of the Pacific Ocean.


The Copper River drains a large region of the Wrangell and the Chugach Mountains, it flows into the Gulf of Alaska. 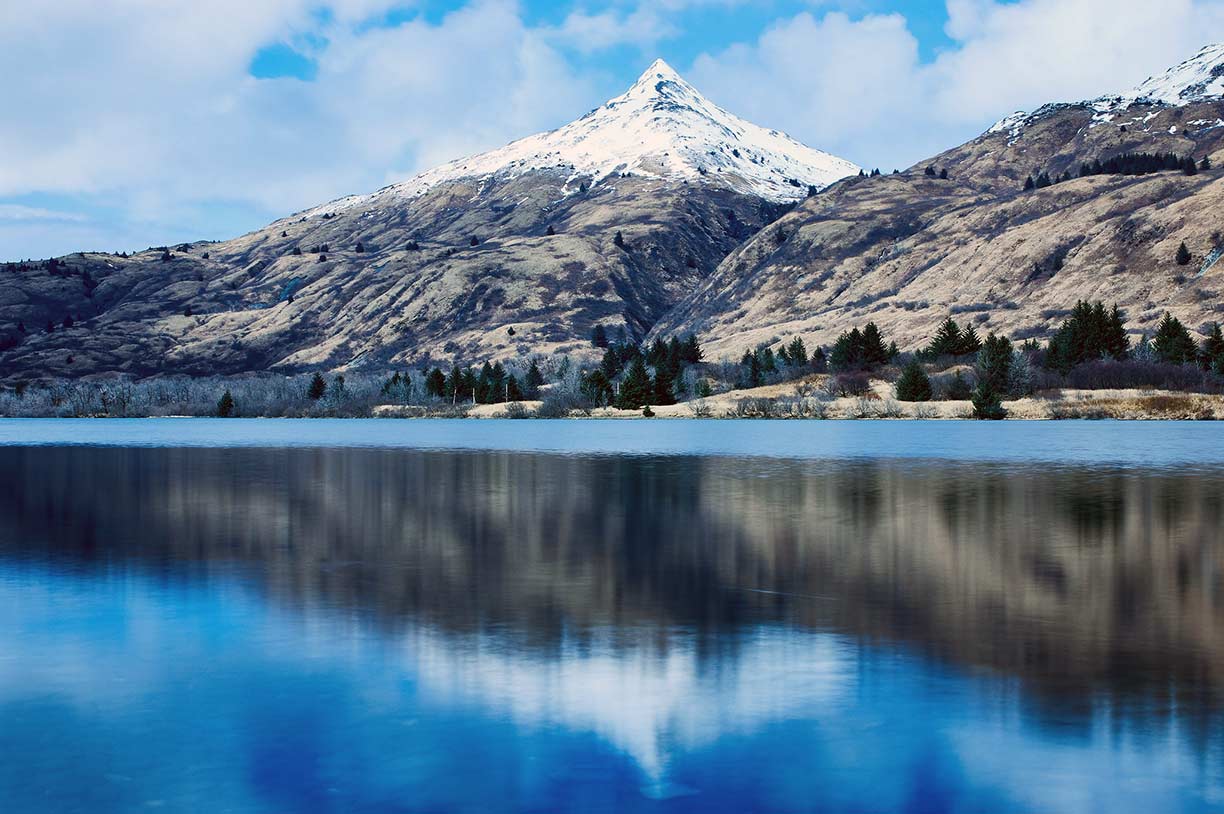 The largest island is Kodiak Island in the Gulf of Alaska; it is separated from Alaska's mainland by the Shelikof Strait. The island has an area of 9,293 km² (3,588 sq mi), making it slightly larger than Cyprus.


Glaciers
Alaska has around 100,000 glaciers. About three-fourths of all freshwater in the state is stored as glacial ice.

Situated southeast of Mount Saint Elias is the largest piedmont glacier in the world, the Malaspina Glacier; it is part of the St. Elias Mountains glacier system. The glacier covers an area of 2,200 km² (850 sq mi), this is about half the size of Rhode Island. [3] 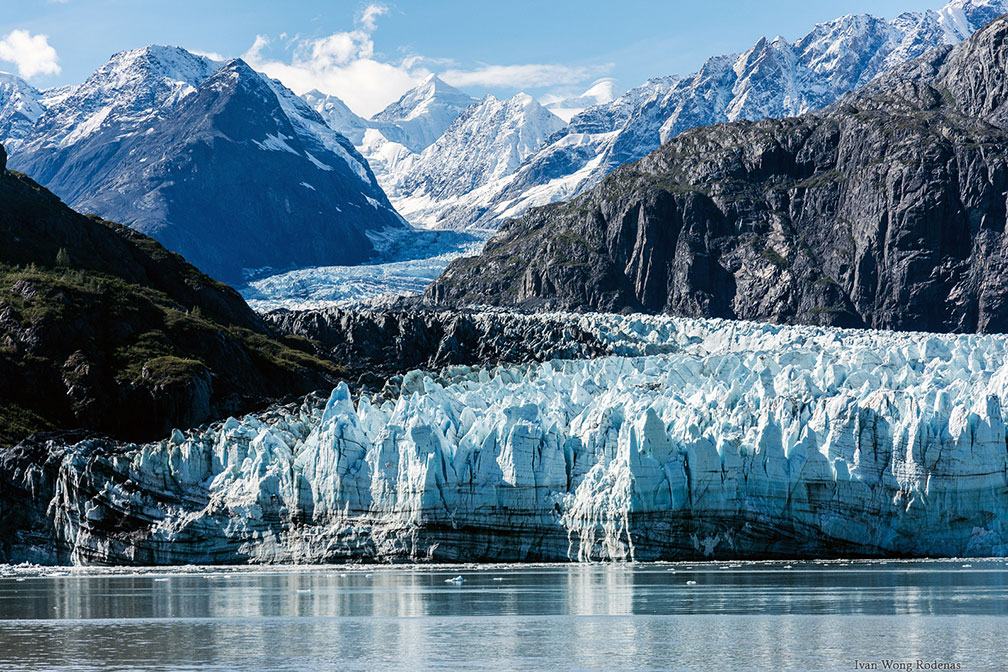 Glacier Bay National Park in Alaska is part of an international UNESCO World Heritage Site in Alaska. Glacier Bay is one highlight of any Alaska cruise.
Image: Ivan Wong Rodenas

The national parks and protected wilderness areas along the border of Canada and the United States contain some of the highest peaks in North America, the largest non-polar icefield in the world, as well as examples of some of the world's longest glaciers.

The spectacular natural landscapes are an area of intense tectonic, volcanic, glacial, and fluvial activities. They are home to an abundance of wildlife with grizzly bears, caribou, Alaskan moose, Canadian lynx, and Dall sheep, marine mammals and migrating (anadromous) fish. 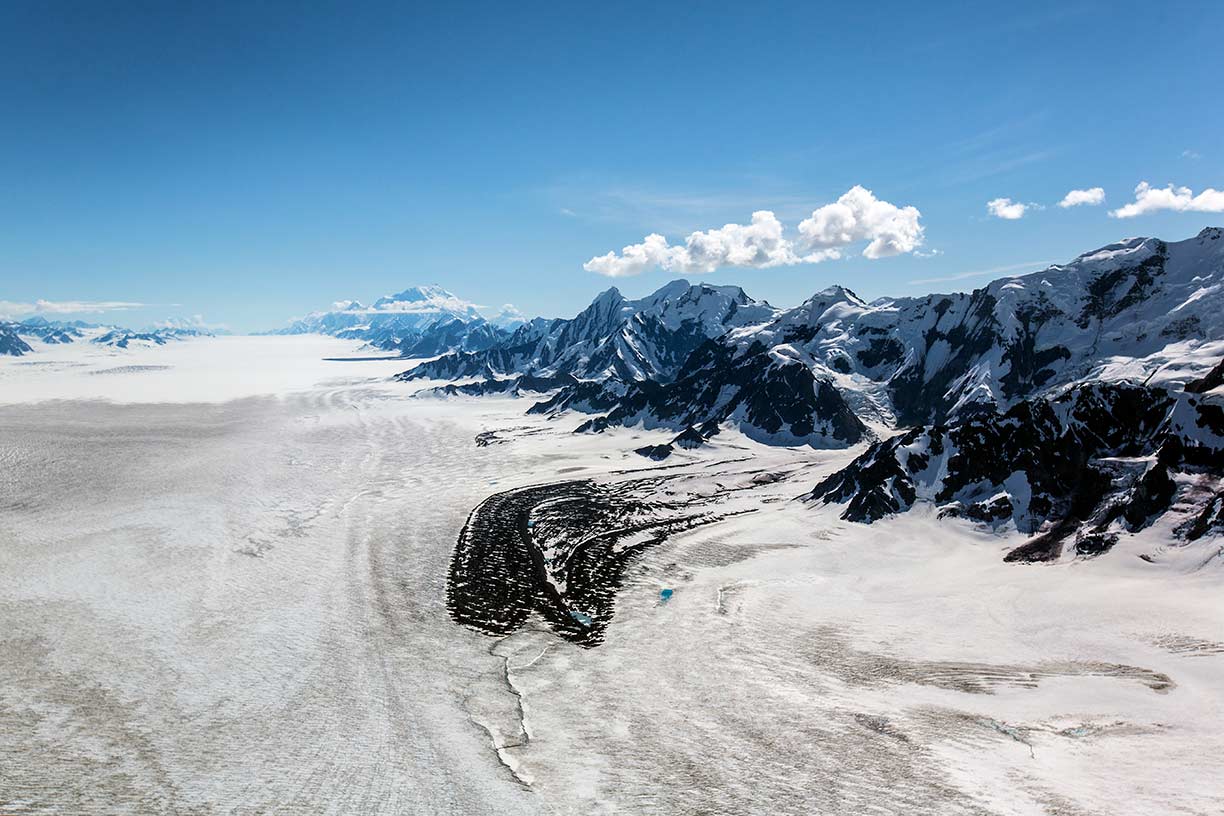 
Glacier Bay (https://www.nps.gov/glba/) Glacier Bay National Park, is a wilderness area and a biosphere reserve in the Inside Passage (Alaska panhandle) west of Juneau.
The park covers an area of 13,350 km² (5,150 sq mi) [5], features high peaks like Mount Fairweather, and glaciers like the vast Grand Pacific Glacier.


Tatshenshini-Alsek is a wilderness park in British Columbia, Canada, established in 1993 after an intensive campaign by Canadian and American conservation organizations to halt mining exploration and development in the area. [6] 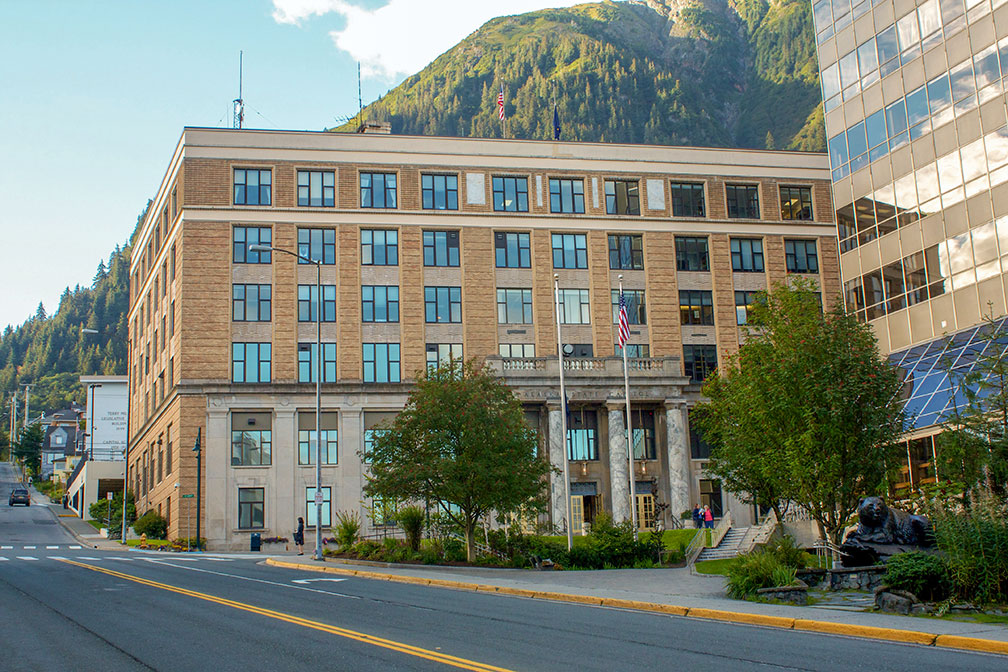 
This vast territory has a population of just 742,000 people (est. 2018) [7]; it is the third least populated state in the United States. Capital is Juneau; the city is located in the Alaskan panhandle in the southeast region (Inside Passage), the largest and most populous city is Anchorage.


Cities and Towns in Alaska

The map shows the location of following cities and towns in Alaska:

Largest cities in Alaska with a population of more than 10,000:

More about Alaska and the United States: