About the United States 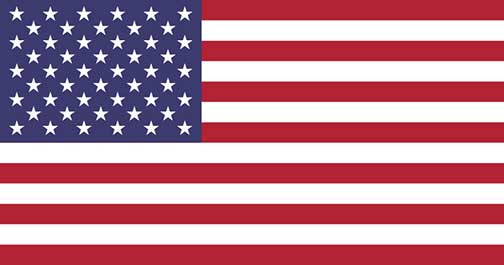 The United States covers an area of 9,833,516 km², making it the third-largest country in the world. Compared, it is more than twice the size of the European Union or somewhat more than half the size of Russia.

The most populous country in America is home to more than 330 million people (in 2020). The capital city is Washington, D.C.; its largest city is New York. Spoken languages are English 80%, and Spanish 13%.

The map shows the Contiguous United States with 48 U.S. states, the state capitals, major cities, interstate highways, railroads, and the location of the busiest US airports.


Map of the United States

Map of the Contiguous United States

You are free to use the above map for educational and similar purposes; if you publish it online or in print, you need to credit One World - Nations Online Project as the source.

More about the United States 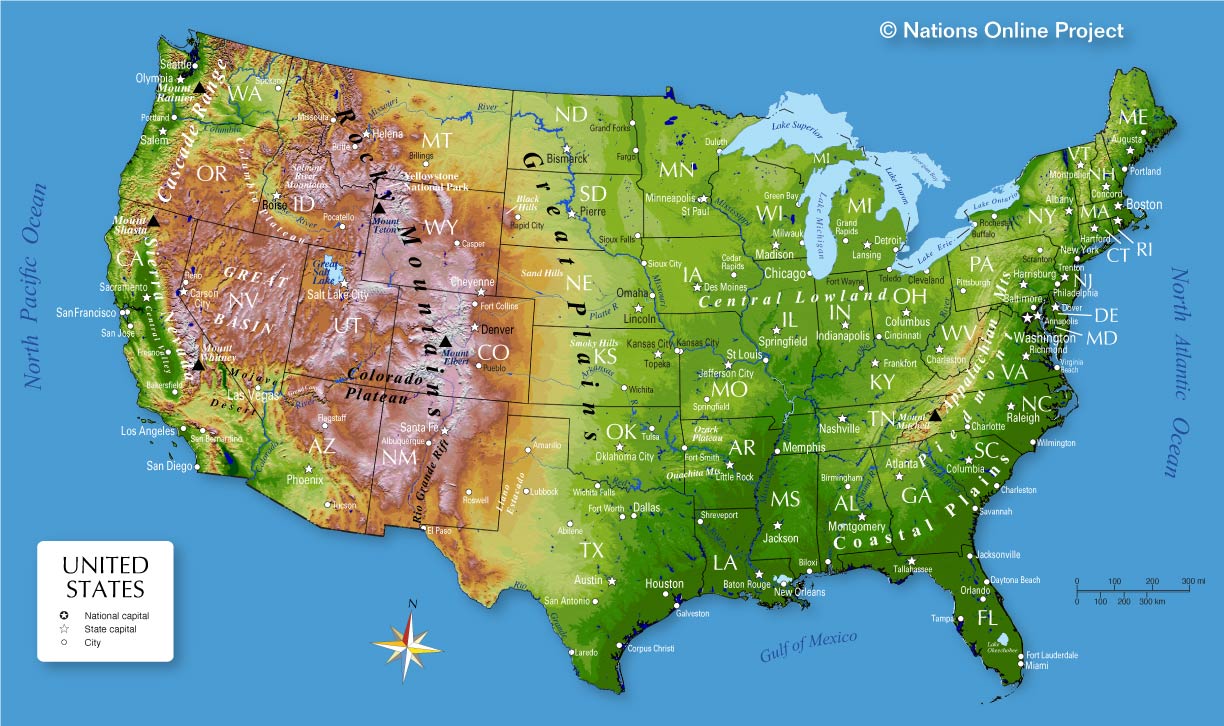 The US sits on the North American Plate, a tectonic plate that borders the Pacific Plate in the west.

Besides many other definitions, generally, the USA can be divided into five major geographical areas:
Northeast, Southwest, West, Southeast, and Midwest. [1]


Northeast
The Northeast borders Canada in the north and is bounded by the Atlantic Ocean in the west. The region offers a rugged interior with several rivers; its landscape is shaped by the valleys and mountains of the Appalachians. Half of Lake Ontario and a portion of Lake Erie belong to the northeast region. Within the Northeast are the New England states and the land areas of New York and Pennsylvania. It is the most economically developed, densely populated, and culturally diverse region of the country.


Southwest
Although definitions of the region's boundaries vary, Arizona, New Mexico, Texas, and Oklahoma are the core states of the United States Southwest. The region's main features are the Mojave, the Sonoran, and the Chihuahuan Deserts.
The Colorado Plateau in the northwest of the area is a high-altitude desert region with scattered forests along the Colorado River and noted for its scenery.

West
Nine states are considered to be part of the western USA. The Rocky Mountains dominate the Mountain states of Montana, Wyoming, Colorado, Idaho, Utah, and Nevada. The Pacific states are Washington, Oregon, and California; they all feature a coastline at the Pacific Ocean. Major mountain ranges are the Sierra Nevada, the Cascades, and the Pacific Coast Ranges.


Southeast
The Southeast, aka the American Southeast, refers to the eastern part of the southern United States and includes Alabama, Arkansas, Florida, Georgia, Kentucky, Louisiana, Mississippi, the Carolinas, Tennessee, Virginia, and West Virginia. The Central Lowland covers much of Arkansas and Louisiana. The low-lying land adjacent to the Gulf of Mexico and the Atlantic Ocean is known as the Coastal Plains. It characterizes the topography of the coastal states in the Southeast region. The southern portion of the Appalachian Mountains brings a little variety to the landscape of Kentucky, Virginia, Tennessee, and North Carolina. 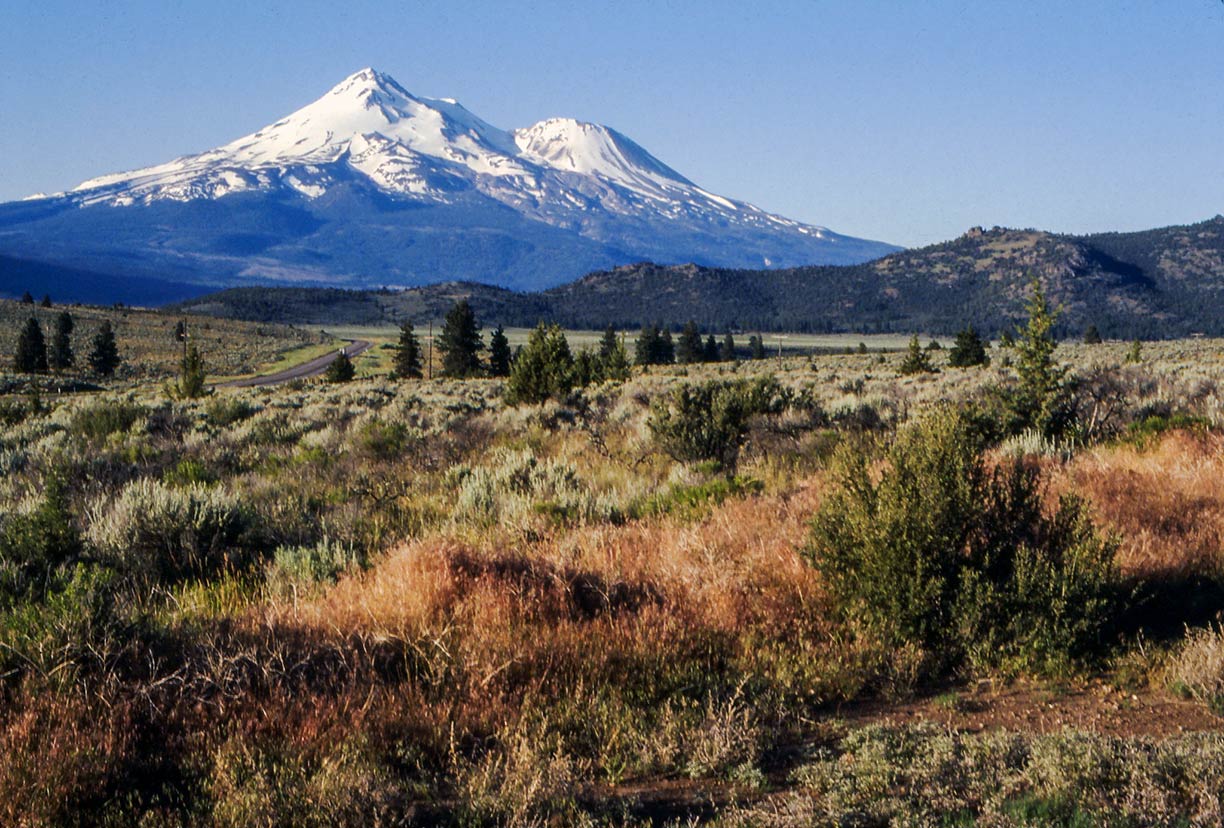 Mount Shasta is the highest peak (4,322 m) in the Cascade Range in California.
Image: wanderingnome

The landscape of the western part of North America features a number of mountain ranges. The two major mountain chains in Alaska are the Brooks Range and the Alaska Range. On the US mainland, most of the mountains are in the west, such as the Rocky Mountains, the Cascade Range, and the Sierra Nevada. Between the Great Plains and the Coastal Plains are the folded and superimposed rock complexes of the Appalachian Mountains, which extend over a length of 2,400 km from the Long Range Mountains on the west coast of the Canadian island of Newfoundland to the north of the US state of Alabama. The Appalachian Mountains are what is left of the millions of years old, Alpine size mountain ranges after the retreat of the glaciers during the last ice age. The Appalachian chain's highest peak is Mount Mitchell (2,037 m) in the US state of North Carolina.

The ten highest mountains in the US are all in Alaska, the highest of which is Mount Denali (6,190 m). The highest peaks of the contiguous United States are in the western part of the country; the highest is Mount Whitney (4,421 m) in California. Other prominent US mountains are: Mount Elbert (4,401 m) in Colorado, Mount Rainier (4,392 m) in Washington state, Mount Shasta (4,322 m) in California, Grand Teton (4,199 m) to the south of Yellowstone National Park in Wyoming, and Mount Mitchell (2,037 m), which is the highest peak of the Appalachian Mountains and the highest mountain in the eastern US.

Rivers
Rivers were important transport routes in the New World; they were the key to colonizing the United States. And even today, the country's river systems are still vital shipping routes for the transportation of coal, agricultural, and manufactured goods. The nation's inland waterways network consists of the great navigable rivers and their connecting tributaries, several major canals, locks, and floodgate systems.


Major rivers in the United States.
The 3,781 km long Mississippi River rises in Minnesota near the Canadian border and flows south to a delta in Louisiana on the Gulf of Mexico.

With a length of more than 4,000 km (including the Red Rock River), the Missouri is one of the most important watercourses in the central United States and the country's longest river. It is a major tributary of the Mississippi.

The source of the Yukon is in the northwest corner of British Columbia in the Canadian subarctic. The approximately 3,200 km long river flows westwards through central Alaska and ends in a huge river delta in southwest Alaska where the Yukon and Kuskokwim rivers empty into the Bering Sea.

The 3,051 km long Rio Grande (span. for Great River) has its source in the Rocky Mountains in southwestern Colorado and flows into the Gulf of Mexico. The river forms the border between Texas and Mexico. 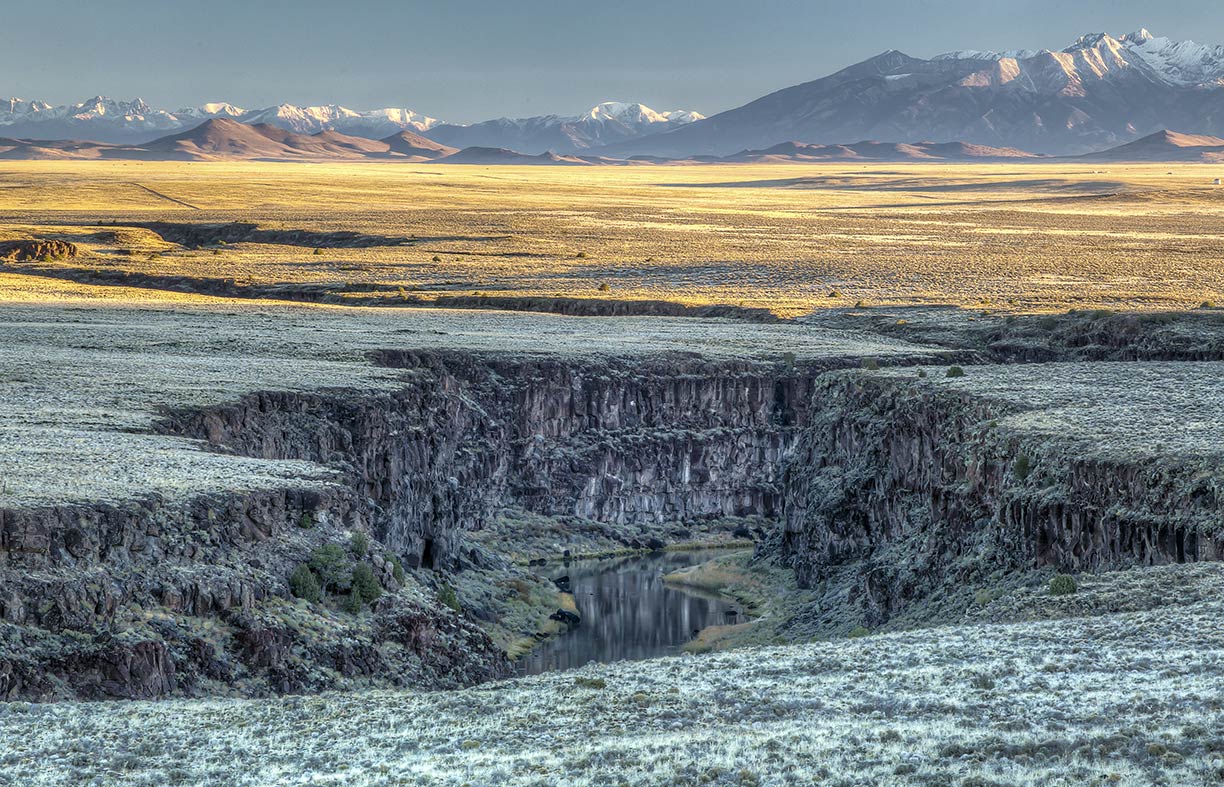 
The Colorado River (span. for red-colored) is 2,333 km long; it is the largest and most important river in the American Southwest. The river has its source in the Rocky Mountains in Northern Colorado and flows southwest, where it shaped the Grand Canyon over millions of years. Further downstream, the river defines the state boundaries of Arizona-Nevada and Arizona-California. Along the main course of the river, there are eleven U.S. National Parks and at least five large dams that reduce the water of the stream to a trickle when it reaches Mexico, where it empties into the Gulf of California.

The 2,364 km long Arkansas River runs from the Rocky Mountains in Lake County of Colorado to join the Mississippi River in Arkansas. Some sections of the river are popular for white water rafting.

The largest river in the Pacific Northwest is the Columbia River; it has its headwaters in British Columbia, Canada, and flows first south into the US state of Washington and then west to empty into the Pacific Ocean south of Seattle.

Population
The United States of America has a racially and ethnically diverse population. According to the U.S. Census Bureau, there are 60.1% Non-Hispanic White Americans, 18.5% Hispanic and Latino (of any race), 13.4% Black or African American, 5.9% Asian, 1.3% American Indian and Alaska Natives. [2]

Busiest US Airports
The map also shows the location of major airports in the United States.

More about the 50 US States
Explore the USA from Alabama to Wyoming. Get more information about each of the 50 states, including facts, fun, maps, and images.

More about the United States