The Continents of the World

All our continents
Image: nationsonline.org

What actually is a continent, and how many are there?

What does the dictionary say?
Continent, noun, [ˈkɒn.tɪ.nənt] one of the seven large landmasses on the Earth's surface, surrounded, or mainly surrounded, by sea and usually consisting of various countries. [1]


The Continents
Africa, the Americas, Antarctica, Asia, Australia, together with Oceania, and Europe are considered to be continents.

The word continent is used to differentiate between various large land areas of Earth into which all the land surface of the planet is divided. The term refers to the 'mountain top' regions of the Earth not flooded by water, dry land.
The level of the surrounding water ultimately defines the shape and borders of continents. More water implies less land and different outlines. Even more water, like that stored away as ice in the poles and glaciers, and you might live on a water planet, no continents.

All right, then, a continent is "a large, continuous area of land on Earth." All continents of the Earth together make up about one-third of the total surface of the planet. The fact is, more than two-thirds of the Earth's surface is covered by water.
The landmasses of the Earth are unequally distributed, two-thirds of the continental landmass is located in the Northern Hemisphere (the upper half of the globe, north of the equator). Why is that? This might be just a feature of our current point in geological time because some million years ago, the bulk of the planet's landmass was in the Southern Hemisphere. (see below)

The Continent of Africa

Capital Cities of Africa.
Alphabetical list of the capitals of Africa.

Flags of Africa
The national flags of the countries of Africa.

Languages of Africa
List of African Languages by Countries.

Searchable Maps of Countries and Capital Cities of Africa

Political Map of Africa
The map shows the 54 independent states of Africa.

Google Earth Map of Africa
Searchable map and satellite view of the Black Continent - find any place in Africa.

Political Map of North Africa, the Middle East, and the Arabian Peninsula

The Continents of the Americas

Map of the United States
Map of the continental USA.

The Continent of Asia

Asia
The states of Asia, the population, and the capital cities of Asia.

Flags of Asia
The national flags of the countries of Asia.

Languages of Asia
List of Asian Languages by Countries.

Searchable Maps of Countries and Capital Cities of Asia

The Continent of Australia and Oceania

Searchable Maps of Countries and Capital Cities of Australia/Oceania

The Continent of Europe

Europe
The European states, the population of the European countries, and the capital cities of Europe.

Flags of Europe
The national flags of the states of Europe.

Languages of Europe
List of European Languages by Countries.

Searchable Maps of Countries and Capital Cities of Europe

The Continent of Antarctica


Where the land meets the ocean, there is the beach. Beyond the beach, it gets even more interesting. The beach is a tiny part of the Continental Shelf, a broad, relatively shallow underwater terrace that is part of the continental crust.
If you move further away from the coast, you will get to a kind of cliff at the end of the terrace. The slope is known as the Continental Slope, where the shelf drops down to the ocean floor. When you follow the underwater scarp, you reach the Abyssal Plain, a vast flat seafloor area hundreds of kilometers wide and thousands of kilometers long, at depths of 3,000 to 6,000 m (10,000 to 20,000 feet). 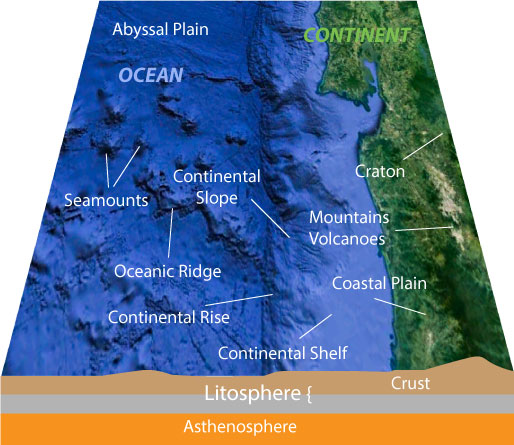 The process when continents move is known as plate tectonics. During this process, the rigid outer shell of the Earth, the lithosphere glides over the rather soft, highly viscous, and less dense asthenosphere, the hot upper layer of the Earth's mantle. 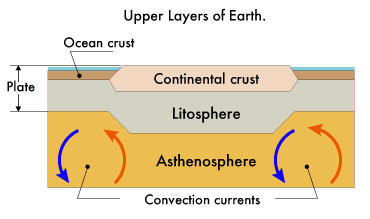 The Formation of Continents

The formation of continents takes time, a long time; it takes millions of years. The various plates of the lithosphere are moving with a speed of 3 to 20 cm (1 to 8 inches) per year relative to each other. The driving forces behind the process of continents to move around across the Earth's surface is not yet fully understood.

Theory 1: large scale convection currents in the mantle, the heating and cooling of mantle matter, develop enough power to move the plates.

Theory 2: plumes, jets of partially molten rock material, rising to the Earth's surface at the ocean floor between mid-ocean ridges, adding matter to the crust, and pushing the plates in opposite directions.

The various tectonic plates may move apart at oceanic ridges, collide at subduction zones, or slide past one another along fault lines.

It is assumed that supercontinents have arranged and broken apart multiple times in Earth's geologic past.

Imagine, recently, about 300 million years ago, during the late Paleozoic and early Mesozoic eras, the world was separated - again, in Land (Pangaea) and Water (Panthalassa). Pangaea was a cluster of most or all of Earth's continental blocks combined in one mammoth continent, surrounded by an ocean that occupied almost 70% of Earth's surface.
In contrast to today's distribution of continents, the larger portion of Pangaea was in the southern hemisphere.

The breakup of the Pangaea Supercontinent over time.

Meanwhile, a chunk of land we now know as India was separated from the southern supercontinent to move swiftly (kind of) northward only to collide with Eurasia. The impact in ultra slow motion was so fierce that at the crush zone, massive mountain ranges were created, including the world's tallest peaks, the Himalayas.
(Further readings: The Earth's Crust on the Move)

Zealandia is a mainly submerged continental fragment in the Pacific Ocean that was formerly part of Gondwana. It broke away from Australia 60–85 million years ago. Zealandia is about half the size of Australia. Not submerged portions of the continent are known as New Zealand with its outlying islands, New Caledonia, and some island territories of Australia, including the Lord Howe Islands and Norfolk Island.

Geologists from New Zealand, New Caledonia, and Australia concluded that Zealandia fulfills all the necessary requirements to be considered a continent* (albeit there are only some islands) it would be the world's smallest continent.

* a continent is defined as a large, continuous, discrete mass of land 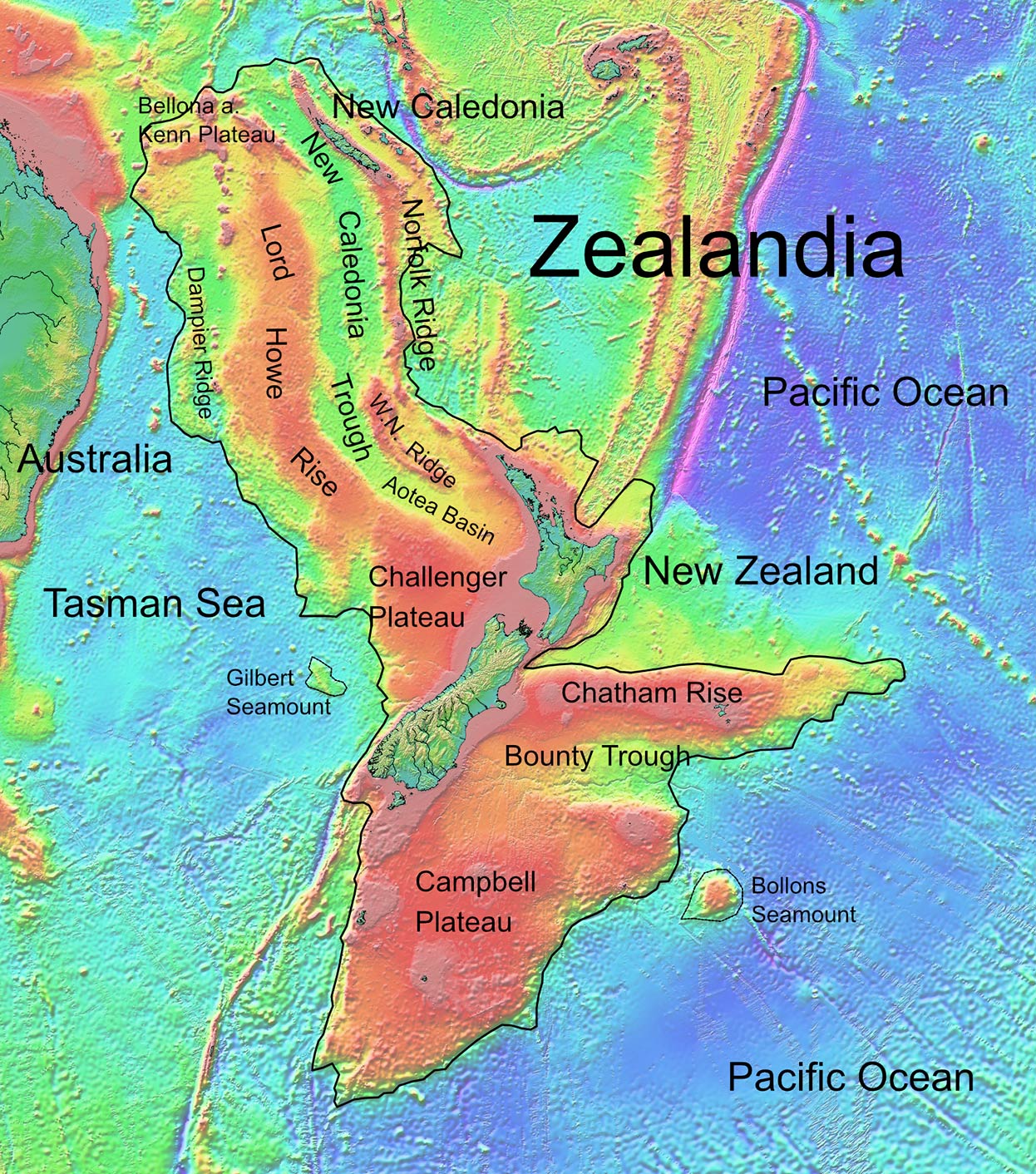 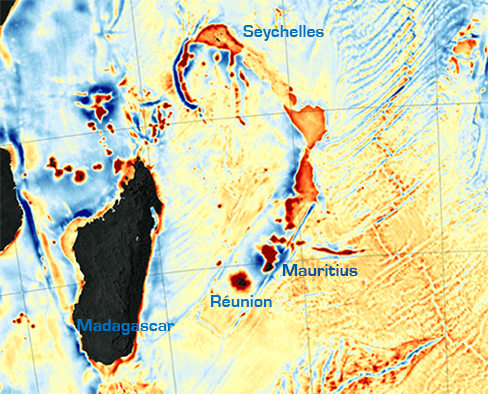 Ocean floor map showing the Mascarene Plateau in center.
Image: NASA
The island of Mauritius is geologically relatively young, created by volcanic activity some 8 million years ago. But findings of ancient zircons on the island about 3,000 million years old, far too old to belong to the island, suggest that under Mauritius lies a 'lost' continent. If you look at a map of the ocean floor in that region, you will see that Mauritius lies at the southern end of the Mascarene Plateau, which looks much like a continental shelf, but without a continent. At the northern end of the plateau sits the archipelago of the Seychelles. Many of its islands are composed of granite rock, which is widely distributed throughout the continental crust.

It is presumed that Mauritia was a small continental fragment, wedged between Madagascar and India that broke away as India and Madagascar separated from Gondwana 85 million years ago.
For all searching for speculative evidence, it might even be the lost continent of 'Kumari Kandam.'
(Further readings: Researchers confirm the existence of a 'lost continent' under Mauritius)

How many Continents are there in the world?

Five continents
We have been taught in school (way back in the '60s in Europe) that there are five continents, Africa, America, Asia, Australia, and Europe, for instance symbolized in the five rings of the Olympic Games.

Six continents
However, there is no standard definition for the number of continents. In Europe, many students are taught about six continents, in which North and South America is combined to form a single America.
These six continents are Africa, America, Antarctica, Asia, Australia/Oceania, and Europe.


Is Oceania a continent?
Actually, by the definition of a continent as a large continuous area of land, the South Pacific Islands of Oceania aren't a continent. Still, one could say they belong to a continent, e.g., Oceania is sometimes associated with the continent of Australia.

The Olympic Rings, a Symbol that represents the 5 (inhabited) continents of the world: Africa, America, Asia, Europe, and Oceania/Australia.

The rings were designed in 1912 by Pierre de Coubertin the "father" of the modern Olympic Games.

The roots of the continent's name.


The origins of the names for the continents.

Continents
From Latin "continere" for "to hold together," terra continens, the "continuous land."

Africa
A Roman term Africa terra "African land," the land of Africus, the northern part of Africa was part of the Roman Empire. The Roman name has possibly its roots in the Phoenician term Afryqah, meaning "colony", as transliterated into Roman Latin.

America
The name America was first used in 1507 by the Cartographer Martin Waldseemüller in its treatise "Cosmographiae Introductio." He named the New World, after Amerigo Vespucci, an Italian navigator who made two (or four) trips to America with Spanish and Portuguese expeditions. It was Vespucci who first recognized that America was a new continent, and not part of Asia.

Asia
Latin and Greek origin - the "Eastern Land," it is speculated to be from the word asu "to go out, to rise," in reference to the sun, thus "the land of the sunrise."

Australia
Latin - Terra Australis incognita the "Unknown Southern Land," an imaginary, hypothetical continent, a large landmass in the south of the Indian Ocean, the supposed counterpart of the Northern Hemisphere (see: Map of the World by Pieter van den Keere).

Europe
Latin and Greek origin. Europa, Europe, often explained as "broad face," from eurys "wide" and ops "face." Some suggest a possible semantic origin by the Sumerian term erebu with the meaning of "darkness" and "to go down, set" (in reference to the sun), which would parallel Orient.

Oceania
From the French Term Océanie, the southern Pacific Islands and Australia, conceived as a continent".

Antarctica
Old French: antartique, in Modern Latin: antarcticus, in Greek: antarktikos, from anti: "opposite" + arktikos: "of the north."


Other Names for the Continents.
"Latin America", the term denotes the regions of the American continent where Romance languages are spoken like in Mexico, in parts of Central and South America and the islands in the Caribbean. "Latin" is used as a designation for "people whose languages descend from Latin" especially Spanish and Portuguese; see also: Languages of the World).

"New World" for North America.
Occident, (Europe) from the Latin term occidentem "western sky, part of the sky in which the sun sets."
Orient, "the East" (originally, usually meaning what is now called the Middle-East) from the Latin term orientem "the east part of the sky where the sun is rising."
Far East, the Eastern Hemisphere = Asia.
Down Under, colloq.: the term refers to Australia and New Zealand, or Australia alone. 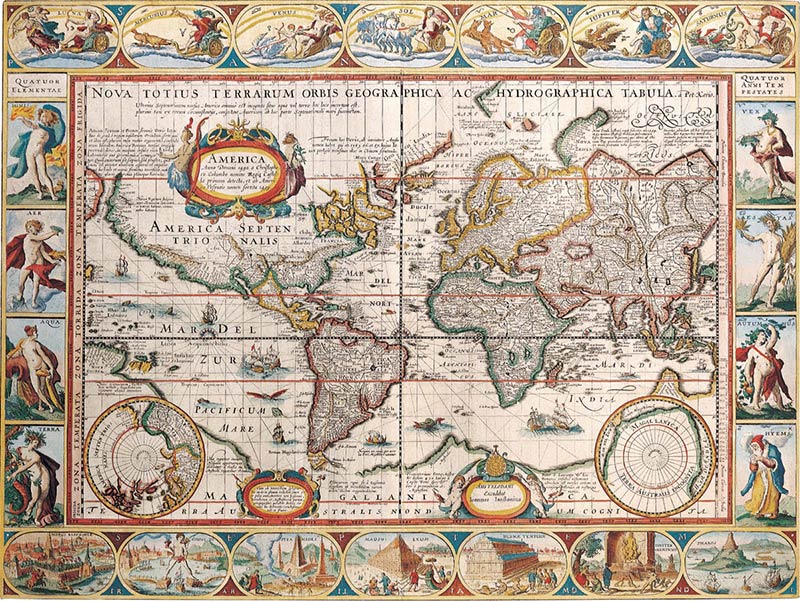 A 17th Century Map of the World by Pieter van den Keere. (click on the map to enlarge)