Biloxi Bay Bridge (with U.S. Route 90) over Biloxi Bay between the cities of Biloxi and Ocean Springs. Hurricane Katrina destroyed the bridge in 2005. The newly constructed bridge is designed to withstand hurricane-force winds and waves.
Image: Jared 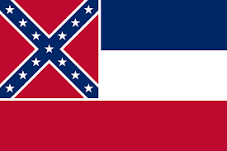 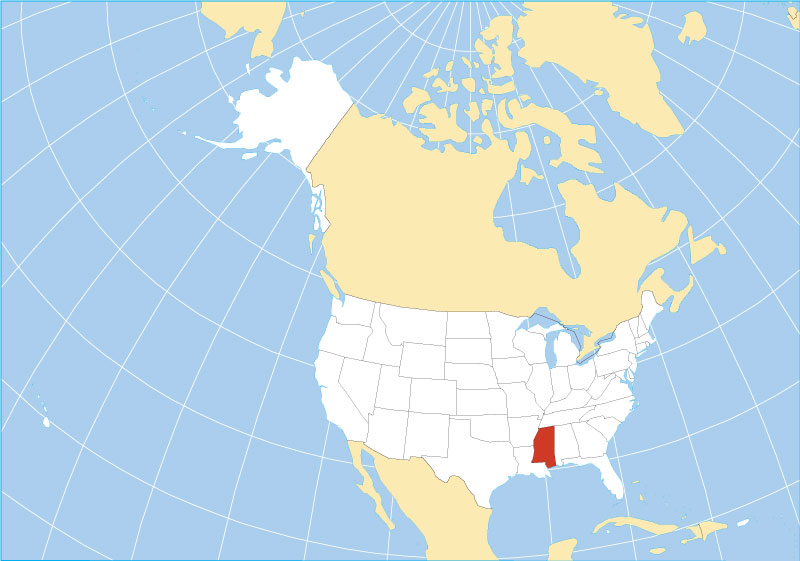 Where in the United States is Mississippi? Location map of the State of Mississippi in the US.


Mississippi, one of the 50 US states, is situated in the Southern United States, known as the 'Dixie' region.

The Magnolia State (Mississippi's official nickname) is part of the Bible Belt, a region of the southern and Midwestern US where Protestant fundamentalism is widely practiced.


Mississippi borders the state of Tennessee to the north. The Tennessee River defines a short section of the Mississippi/Alabama border at its northeastern corner; the remaining part of the state border is more or less a straight line.
The line cuts in half what was formerly the entire Mississippi Territory. 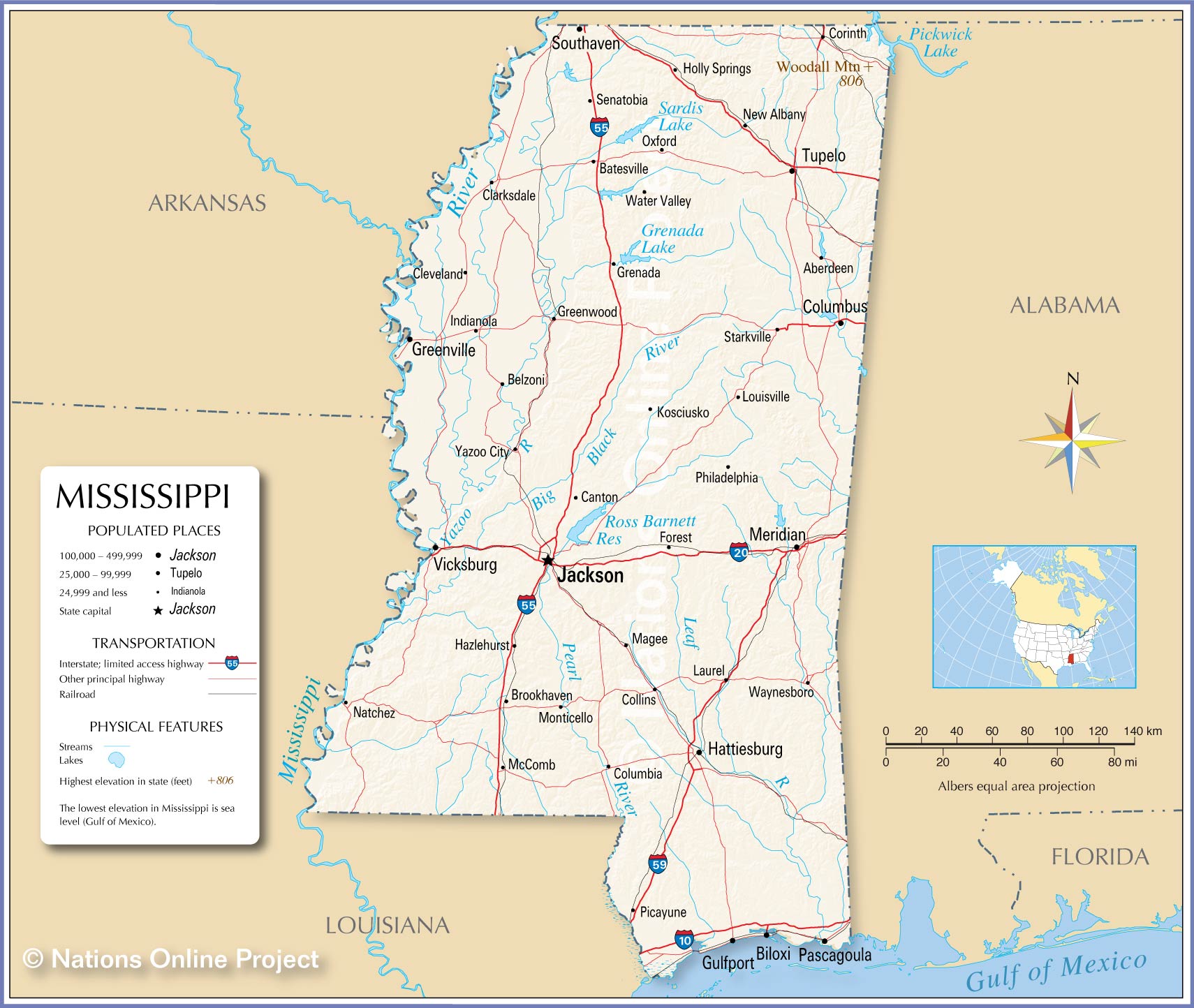 The detailed map shows the US state of Mississippi with boundaries, the location of the state capital Jackson, major cities and populated places, rivers and lakes, interstate highways, principal highways, and railroads.

More about the State of Mississippi 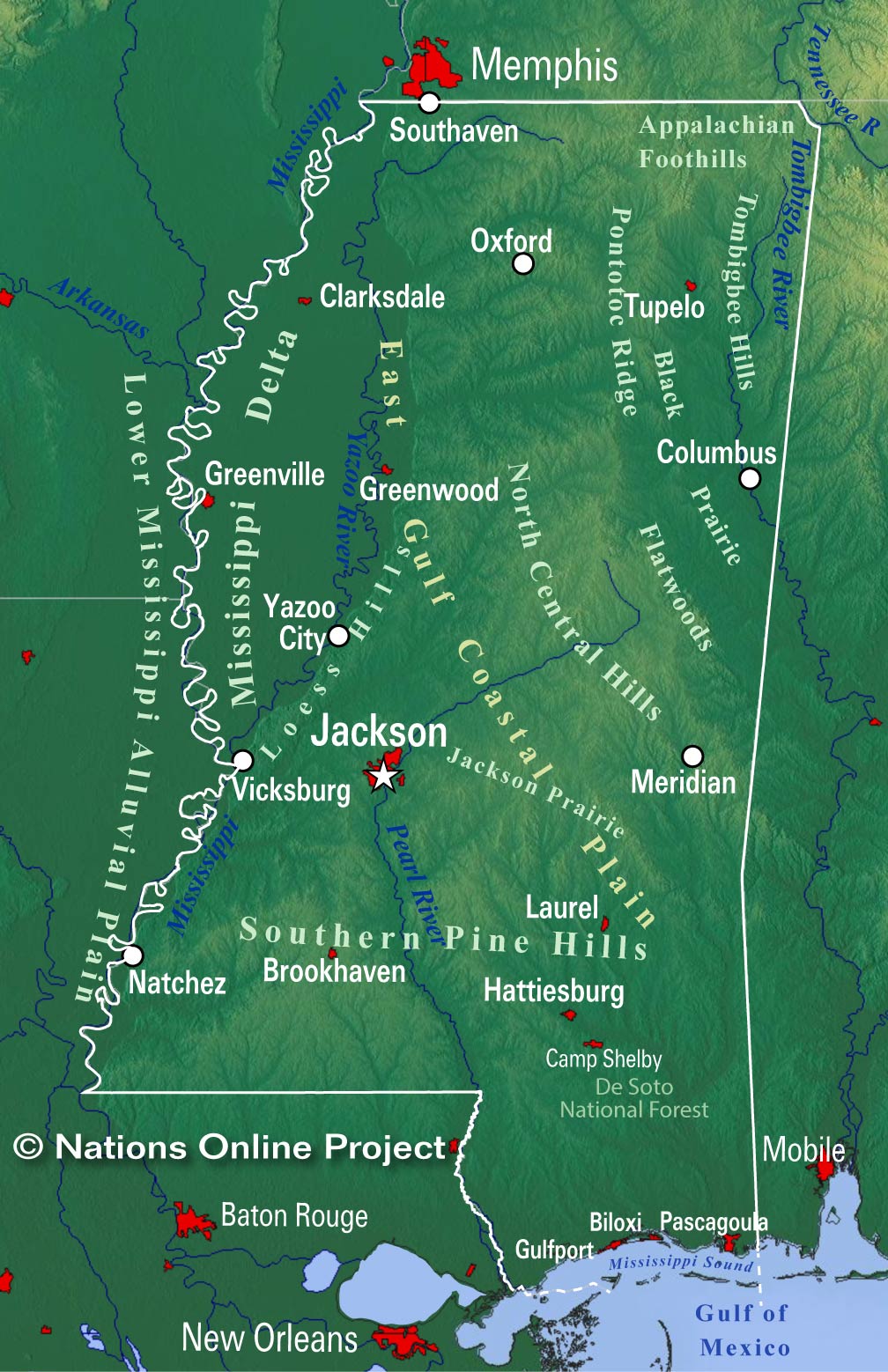 
Inhabited by local natives for thousands of years, Mississippi became a French colony in the first half of the 18th century. The French ceded the area to Britain in 1763.

Mississippi Territory was organized on 7 April 1798, from territory ceded by Georgia and South Carolina; it was later twice expanded to include disputed territory claimed by both the U.S. and Spain.

On 10th December 1817, the western half of the territory was admitted to the Union as the State of Mississippi, as the 20th state.

The eastern half became the Alabama Territory until its admittance to the Union as the State of Alabama on 14 December 1819.


The state lies entirely in the Central Lowland of the US mainland; its flat landscape is crisscrossed by many rivers.

In the southeast, Mississippi has a 120 km (75 mi) long coastline at the Gulf of Mexico. The coast features a number of large bays, including the Bay of Saint Louis, Biloxi Bay, and Pascagoula Bay.

The urban metropolitan zone along the coast is Gulfport–Biloxi–Pascagoula, a combined statistical area with an estimated population of 400,000. 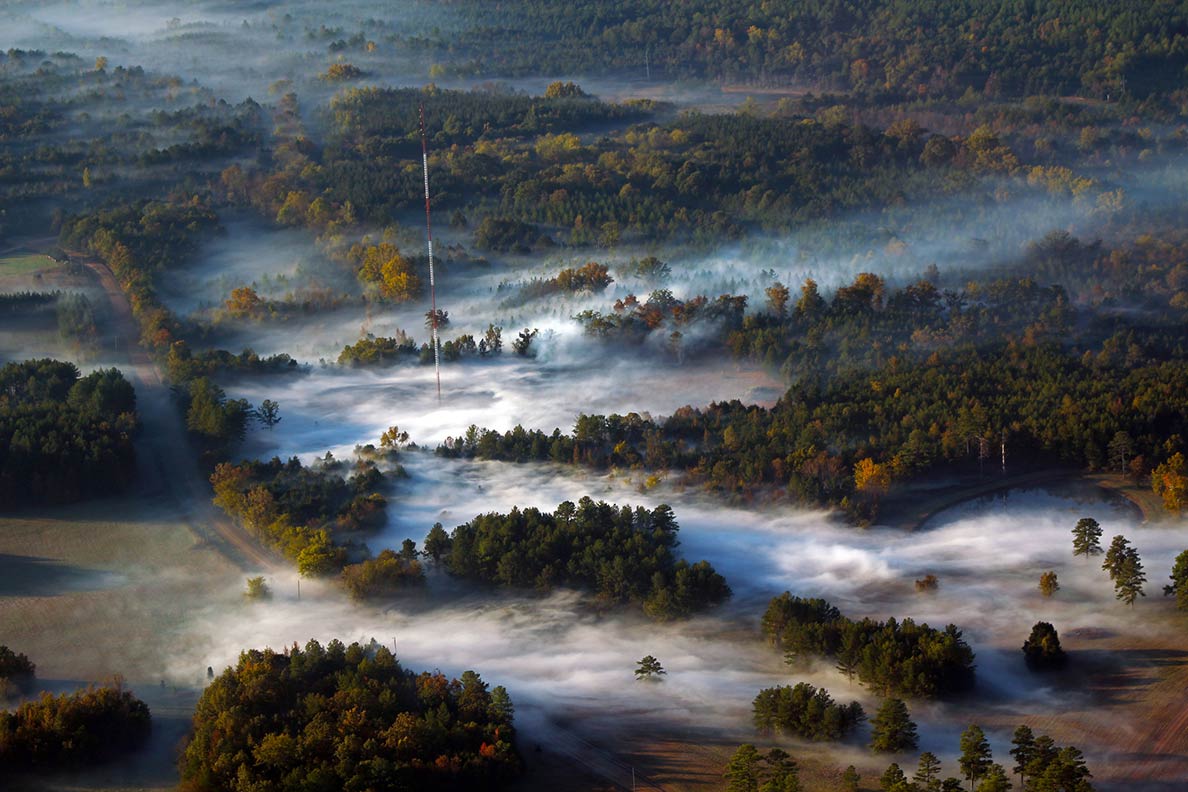 Mississippi is divided into six major geographic regions: the Delta, the North Central Hills (or Red Clay Hills, or simply, the Hills), the Appalachian Foothills, the Black Prairie, the Piney Woods, and the Gulf Coast.

1. The Mississippi Delta in the eastern part of the state is not a delta, but in reality, a two hundred miles long alluvial plain created by regular flooding by the Mississippi and the Yazoo rivers.
Before colonization, the Delta was covered in hardwood forest, but European settlers developed it soon into one of the most fertile cotton-growing areas in the nation.

2. The Loess Bluffs or Loess Hills, in the eastern rim of the Delta, is a narrow strip of hills and sharp bluffs along the lower Mississippi Valley, formed by windswept sand and clay deposits in the last ice age. 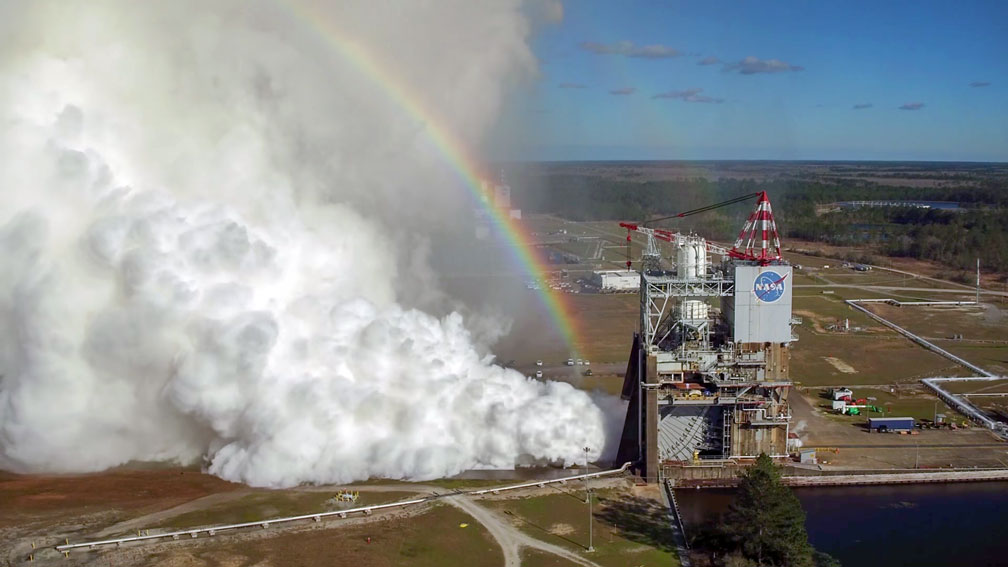 3. The North Central Hills (also known as the Red Clay Hills) is a region situated in central-north of the state; the area got its name from the red color of its soil and the clay deposits there. The red clay soil supports only small farms.

4. To the east of the Central Hills are the Appalachian Foothills, a small portion of the Appalachians, an area in the extreme northeastern corner of the state. The hilly landscape and rocky soil allow only for small farming.

Mississippi's highest elevation is in this area, Woodall Mountain, a hill with an altitude of just 246 m (800 ft).

5. To the south of the Appalachian foothills are four distinctive landforms; the Tombigbee Hills are hills along the border with Alabama, now covered with pine and hardwood forests.
The Pontotoc Ridge is a highland area along the Central Hills, the Black Prairie, a region with fertile black soil, excellent for agriculture, and the Flatwoods, a low-lying narrow region with heavy clay soils. 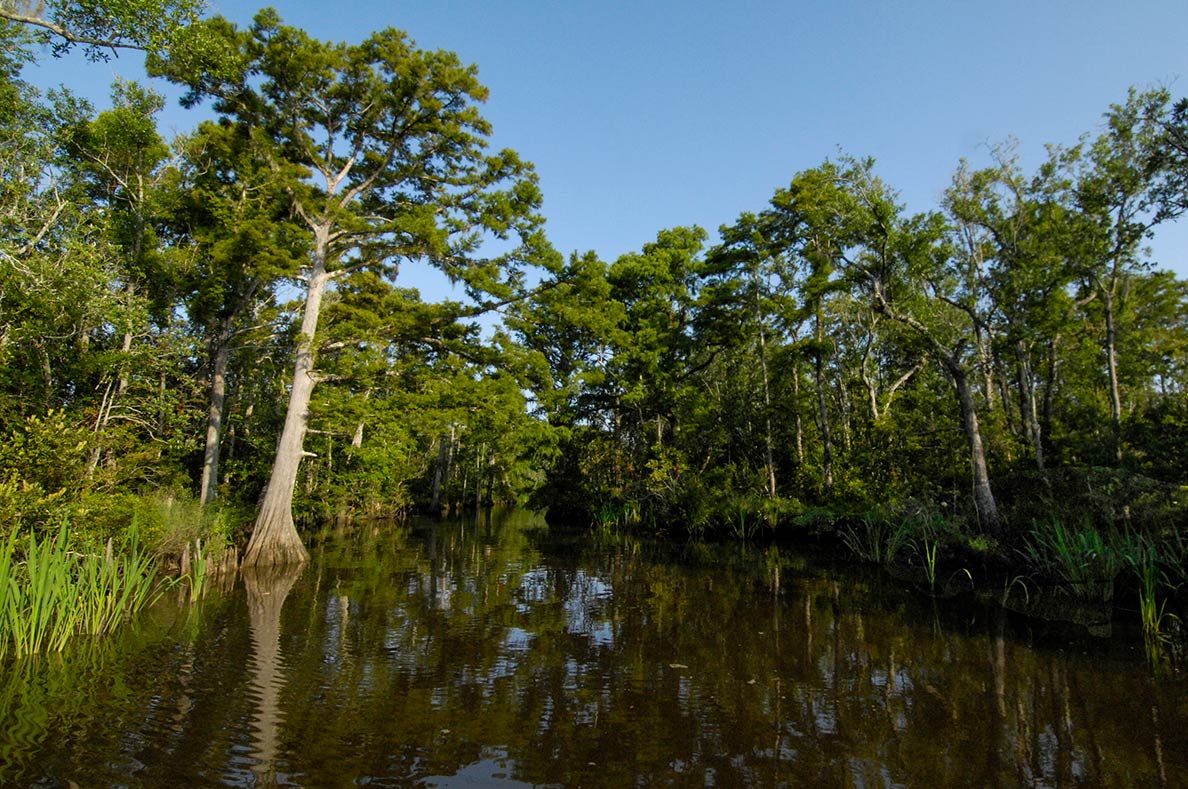 The Pascagoula River in Mississippi is the only unaffected (or nearly so) river flowing from the United States into the Gulf of Mexico.
Image: Visit Mississippi


Largest Lakes
Pickwick Lake, a reservoir at the Tennessee River, the lake is in three states Alabama, Mississippi, and Tennessee. The lake is the north end of the Tennessee-Tombigbee Waterway, which provides a water transportation route to the Gulf of Mexico.

Grenada Lake, the reservoir at the Yalobusha River, was constructed to help control flooding along the Yazoo River Basin.

Sardis Lake is a 400 km² reservoir at the Little Tallahatchie River. 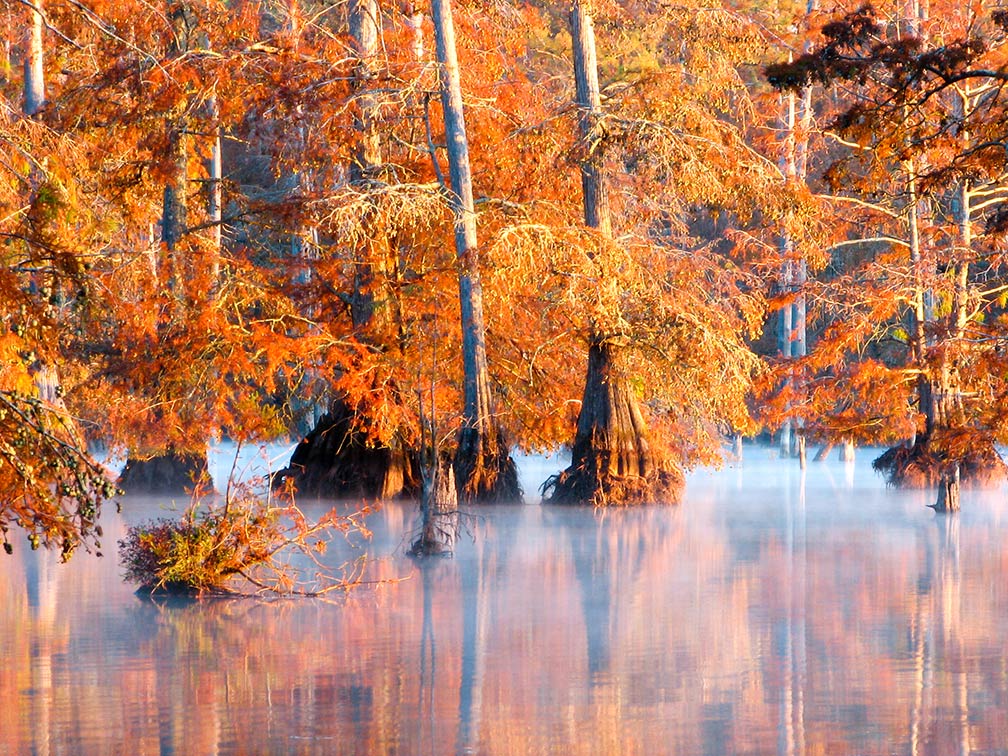 
Highest point
The highest elevation in Mississippi is Woodall Mountain, a hill of 246 m (800 ft) in Tishomingo County in the northeastern part of the state. 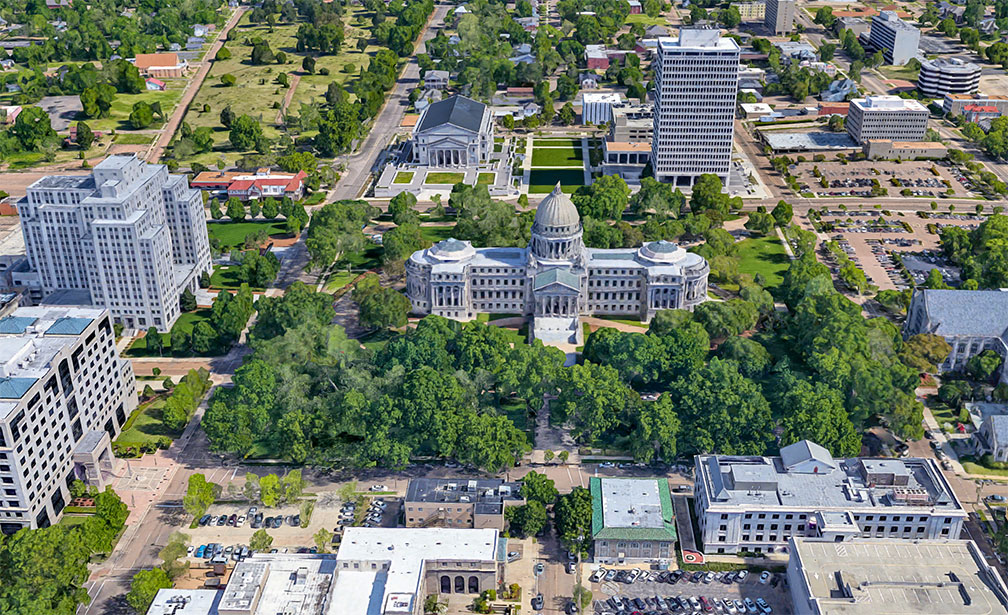 Other major cities (with a population of more than 40,000) are Southaven, a suburb of Memphis, Tennessee, Hattiesburg, a city that played a key role in the civil rights struggles of the 1960s [3]), Biloxi, and Meridian.


Cities and Towns in Mississippi

The map shows the location of following cities and towns in Mississippi: 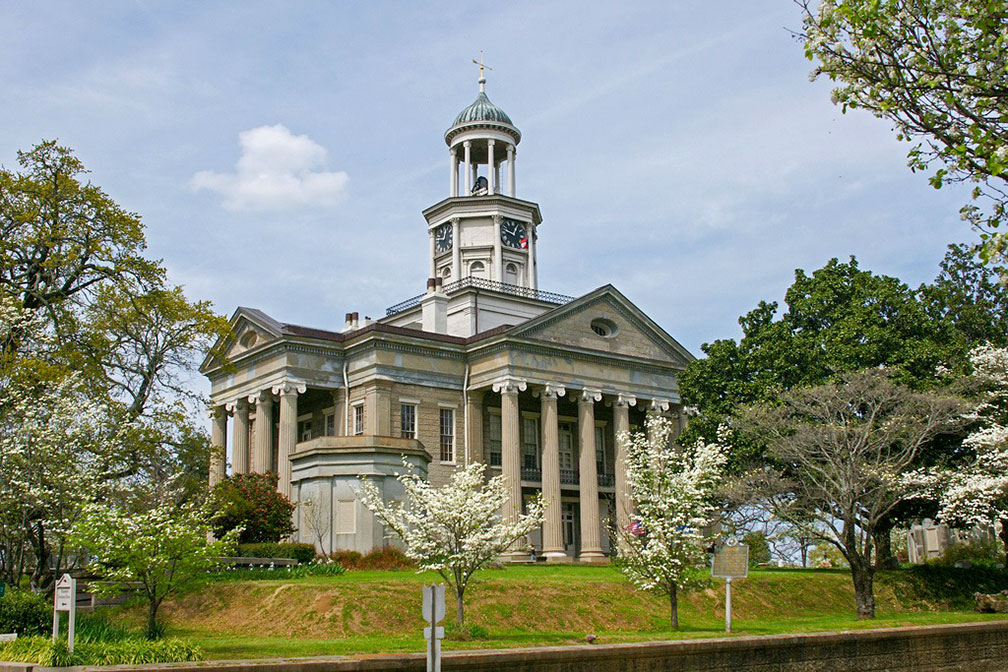 
Other cities and towns in Mississippi: 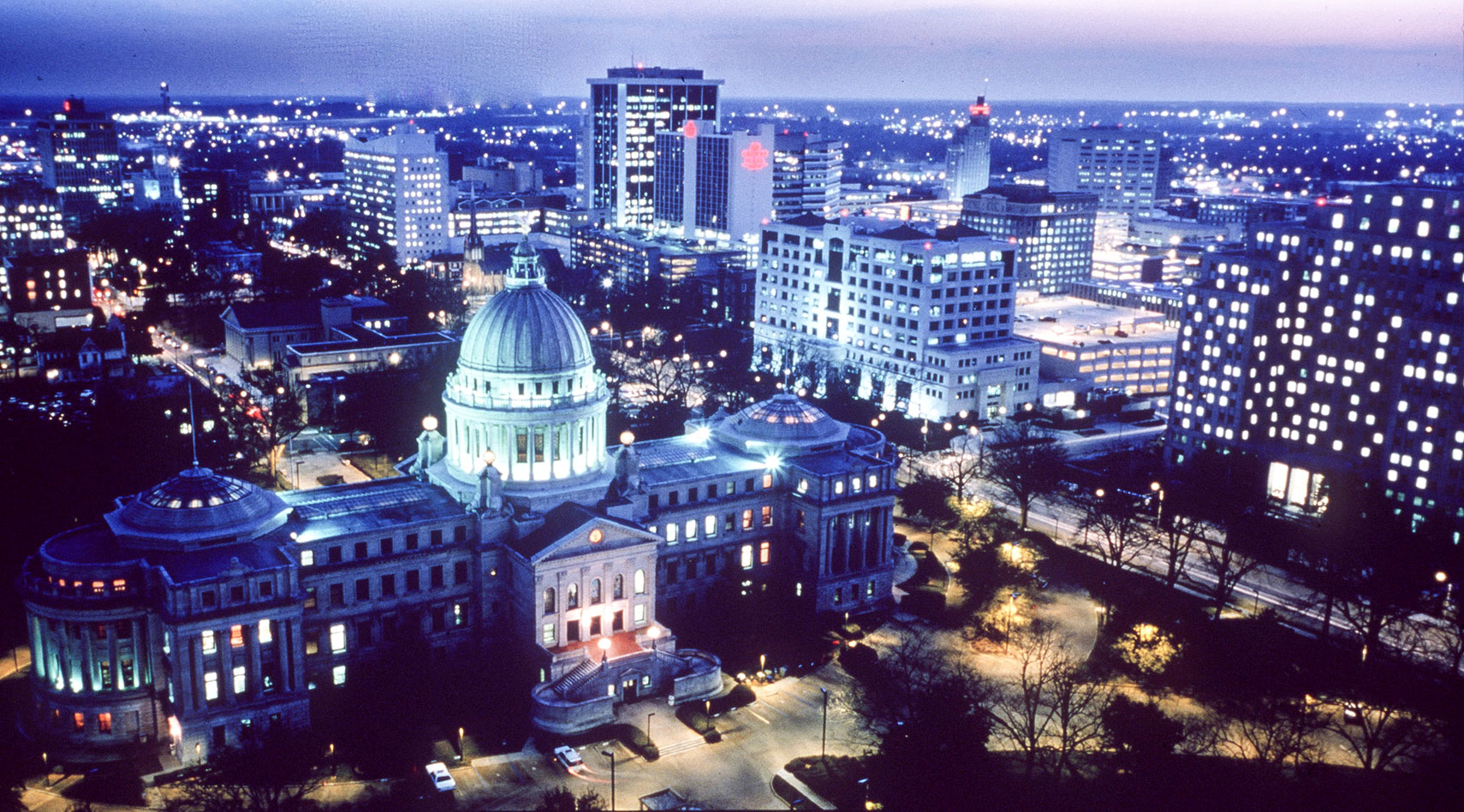 More about Mississippi and the US