Satellite View and Map of the City of Denver, Colorado

Denver in winter, the Central Business District is in the center, Colorado State Capitol to the left, the Front Range of the Southern Rocky Mountains in background.
Photo: R0uge

The satellite view shows Denver, officially the City and County of Denver. It is the largest city and the capital of Colorado situated in the central

United States. Denver lies at the confluence of the Cherry Creek and the South Platte River, east of the Rocky Mountains at the western edge of the Great Plains.
The "Mile High City" lies at an elevation of, you thought as much, 1 mile, or 1,609 m, or also 5,280 feet (but who wants to be a 5,280 Feet High City?). 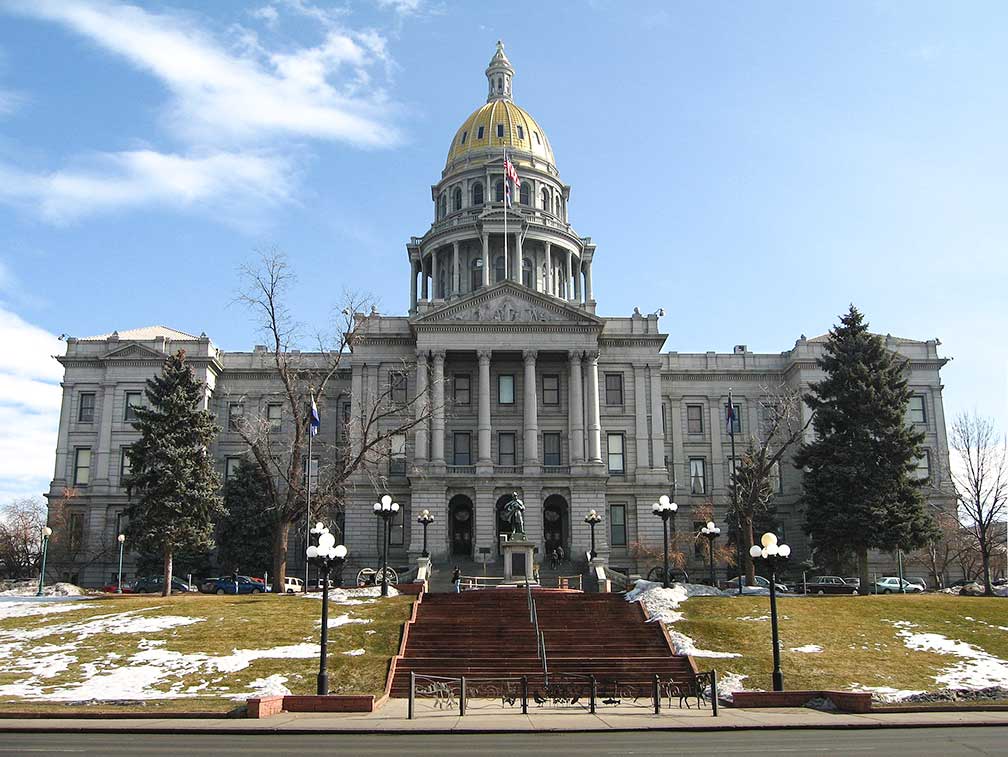 Colorado State Capitol in Denver, Colorado. The capitol is made from Colorado rose onyx, a type of stone so rare that all known reserves were used in the capitol’s construction. The dome is plated with 24-karat gold leafs.
Photo: Greg O'Beirne


In 1858 gold was discovered in the Rockies, thousands of venturers, merchants, miners, settlers, and prospectors set out for Colorado, and the site of today Denver became a makeshift mining town.

In 1861, Denver became part of the newly established Colorado Territory. Six years later, in 1867 the city became the permanent seat of government Colorado Territory, and on 1 August 1876 Colorado was admitted to the Union as 38th State.

Today Denver has a city population of about 682,500 inhabitants (in 2015), 2.8 million people live in the Denver-Aurora-Lakewood metropolitan area, more than half of the state's population.

The city's economy is determined on its geographic position. Denver is the primate city in a radius of more than 500 miles (800 km). The city is a huge transportation hub and a center for distribution of goods and services for Colorado and many neighboring states. 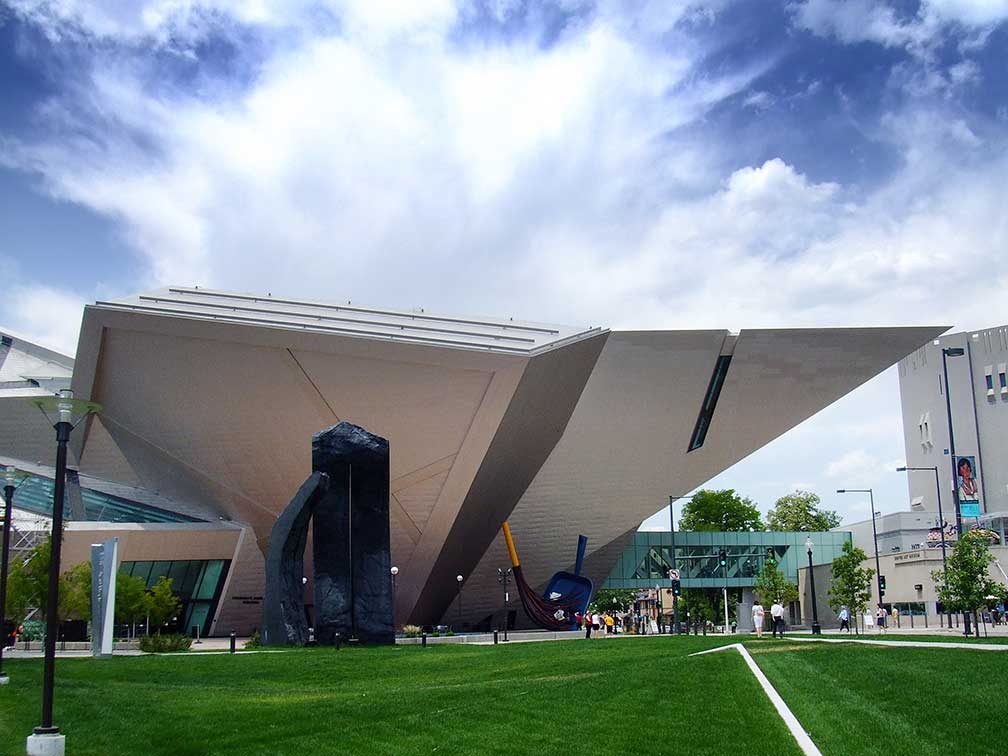 
Historical places:
Colorado State Capitol, LoDo (Lower Downtown), the oldest and original settlement of the city of Denver.
The Denver Mint was built in 1897; it is one of the four US mints that produce coins.

Visual arts:
Denver Art Museum - DAM (www.denverartmuseum.org), is the largest art museums within a radius of 500 mi. It showcases a collection of American Indian art, Modern and Contemporary Art, and it is home to Linda, the famous hyperrealistic sculpture by Denver artist John DeAndrea.

Churches:
Cathedral Basilica of the Immaculate Conception is a French Gothic style cathedral of the Archdiocese of Denver, constructed in the beginnings of the 20th century.

Shopping:
16th Street Mall, Denver’s must shopping area, dining and entertainment included. The mall houses over 300 stores and over 50 restaurants. 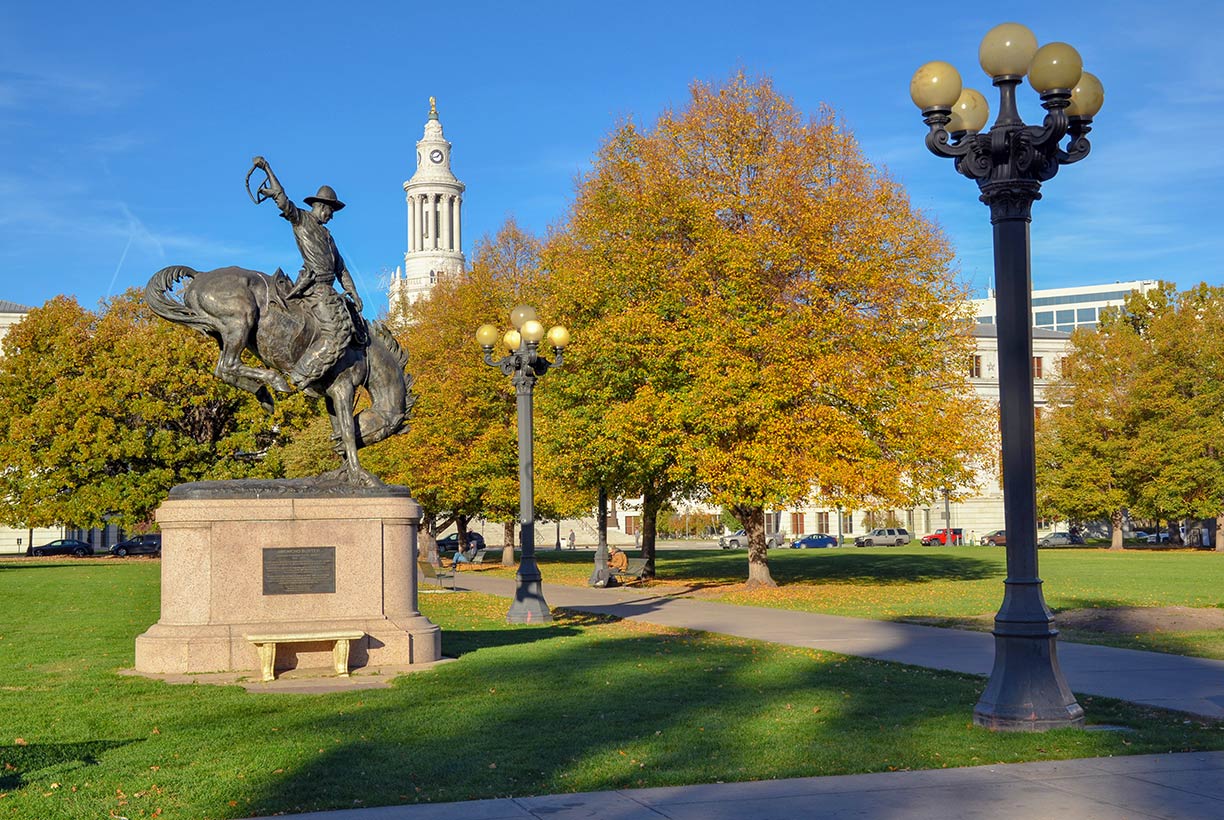 
Avenue Theater (www.avenuetheater.com) performs comedies, musicals, and plays; it is home to the World Humor Organization (WHO) and Chicken Lips Entertainment.

The Historic Elitch Theatre (historicelitchtheatre.org), a theater and workshop production in a historic theater. The venue is often described as "one of the cradles of American drama."

The Ellie Caulkins Opera House (www.operahousedenver.org) is home to Opera Colorado. The opera is part of the Denver Performing Arts Complex (www.artscomplex.com), one of the largest performing arts venues in the United States, the complex houses also the Buell Theatre and Boettcher Concert Hall, which was the first symphony hall in the US in which the audience surrounds the stage.

Parks:
The Denver Zoo (www.denverzoo.org), founded in 1896, is the most popular paid attraction in the Denver metropolitan area.

The Denver Botanic Gardens (www.botanicgardens.org) showcases North America's most extensive collection of plants from cold temperate climates as well as plants from the Rocky Mountain region.

Theme park:
Elitch Gardens (www.elitchgardens.com) is a theme park and a family water park in Summer; the amusement park is located in the downtown area.

Sports:
Coors Field is a baseball park and home to the Colorado Rockies.
Mile High is a football stadium and home field of Denver Broncos.
Pepsi Center, is a multi-purpose arena, home to the Denver Nuggets (basketball).

Outdoors:
Get fresh in the Rocky Mountains at Loveland Ski Area, located within the Arapahoe National Forest.

The Map shows a city map of Denver with expressways, main roads, and streets, zoom out to find Denver International Airport (IATA code: DEN) located in the northeast of Downtown Denver, in a distance of about 40 km (25 mi) by road (via I-70 E and Peña Boulevard).

More about Colorado and the US