Satellite View and Map of the City of Richmond, Virginia

The satellite view shows Richmond, an independent city and the capital of the Commonwealth of Virginia. Virginia is situated in the eastern

United States, bordering the Chesapeake Bay and the Atlantic Ocean in the east. Its capital lies in the east-central part of the state in the Piedmont region of Virginia at the head of navigation of the James River, about 100 mi (175 km) south of Washington D.C. 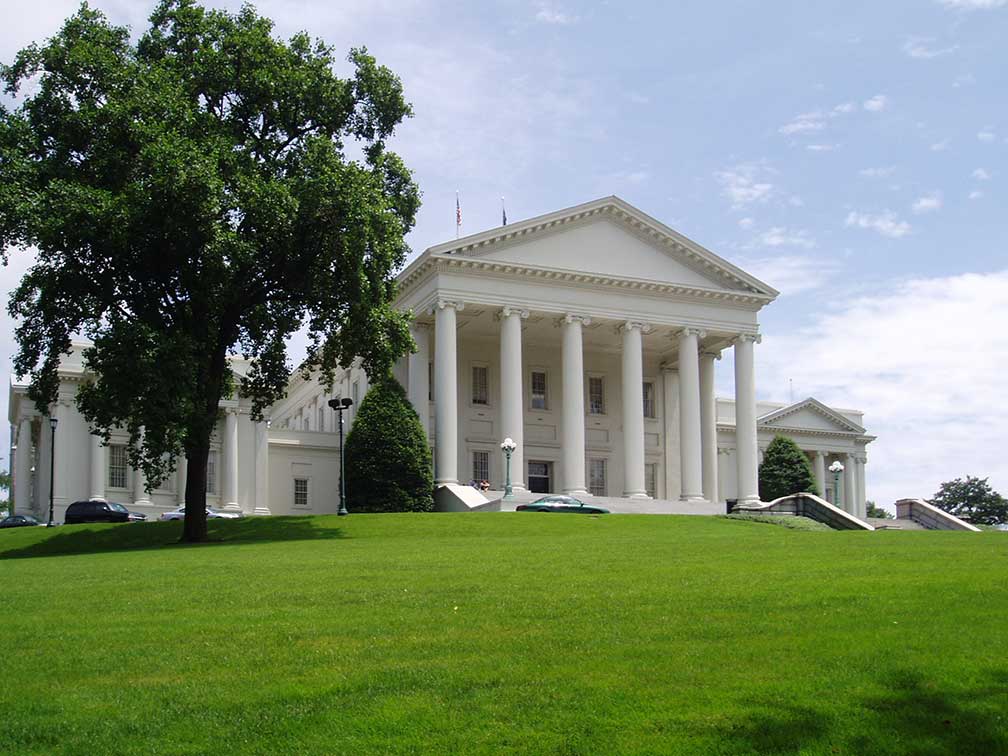 The Virginia State Capitol Building in Richmond. The building was home to the oldest legislative body in the Western Hemisphere.
Image: Anderskev


Richmond is among America’s oldest cities; it was founded in 1737 by an English planter named William Byrd II, who provided the land where the town was laid out.

The city was incorporated in 1742, and became the capital of the Colony and Dominion of Virginia in 1780, only to be burnt down by the British in 1781.

During the American Civil War, Richmond served as the capital of the Confederate States of America. The city was the center of political power of the Confederacy, and the source of munitions, armament, weapons, supplies, and human resources for their army. Therefore it was the target of numerous attempts by the Union Army to seize the city. On the 2 April 1865, Richmond was captured by Union troops. Retreating Confederate soldiers were under orders to set fire to the town, to bridges, the armory, and warehouses with supplies as they left.
One month later the war was over on the 9th of May 1865.

In 1871 Richmond became an independent city. In the 19th century, the town was the largest and most famous slave trade market in the entire nation.

Today Richmond is a middle-sized city with a population of 228,000 'Richmonders' (in 2018), nearly 1.3 million people live in the Richmond Metro Statistical Area (MSA).

Richmond is a transportation hub with bus services by Greyhound and Megabus. There are two railroad stations served by Amtrak. The city is connected by an intersection of two major interstates, Interstate 64 and Interstate 95. Richmond's economy is based on industries in the fields of law, finance, and government, advertising, bio-science, and technology. Six Fortune 500 companies are headquartered in the Richmond area.

Richmond is home to the University of Richmond, a private, liberal arts college, and the Virginia Commonwealth University, a public research university. 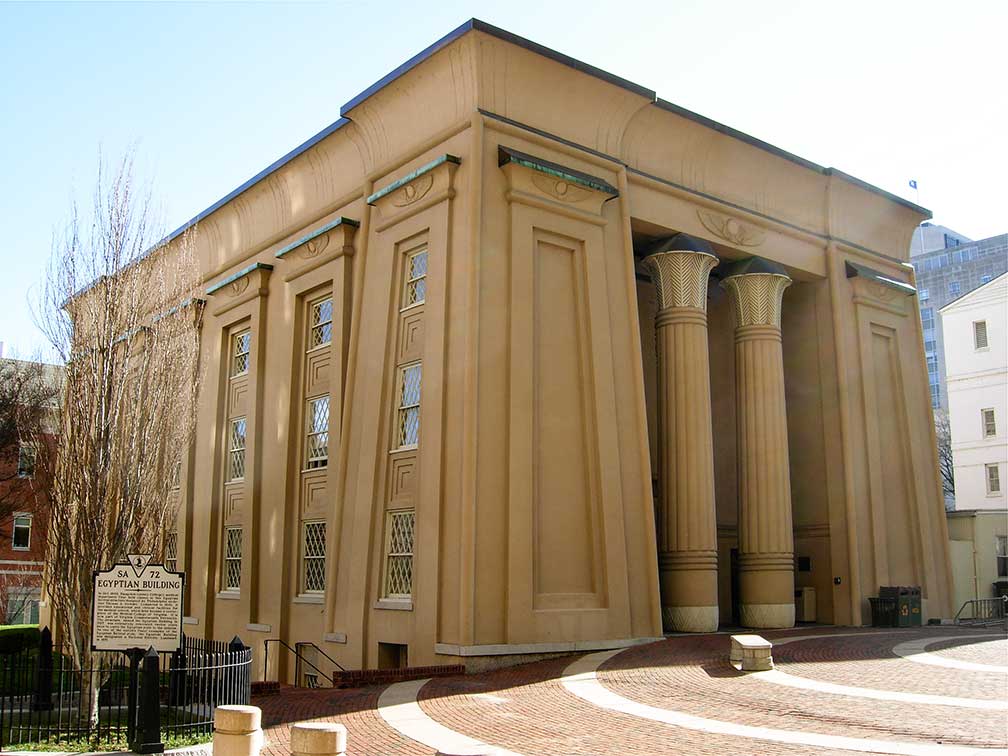 Virginia State Capitol (virginiageneralassembly.gov) is the seat of the state government of the Commonwealth of Virginia.

Maymont Mansion (maymont.org) is a Victorian estate and park with an arboretum and formal gardens.

Hollywood Cemetery (www.hollywoodcemetery.org) is a fully operational cemetery since the 19th century and the resting place of two US Presidents (James Monroe and John Tyler). The cemetery within an arboretum is also the last home of the Confederate States President Jefferson Davis and 28 Confederate generals.

Agecroft Hall & Gardens (www.agecrofthall.org) is a Tudor manor house on the James River in the Windsor Farms neighborhood. The mansion was built in the late 15th Century in England and brought to Richmond piece by piece.

Virginia House (www.virginiahistory.org) is another manor house in the Windsor Farms neighborhood; formerly an English country manor home relocated to Richmond in 1925. Virginia House is owned and operated by the Virginia Historical Society. 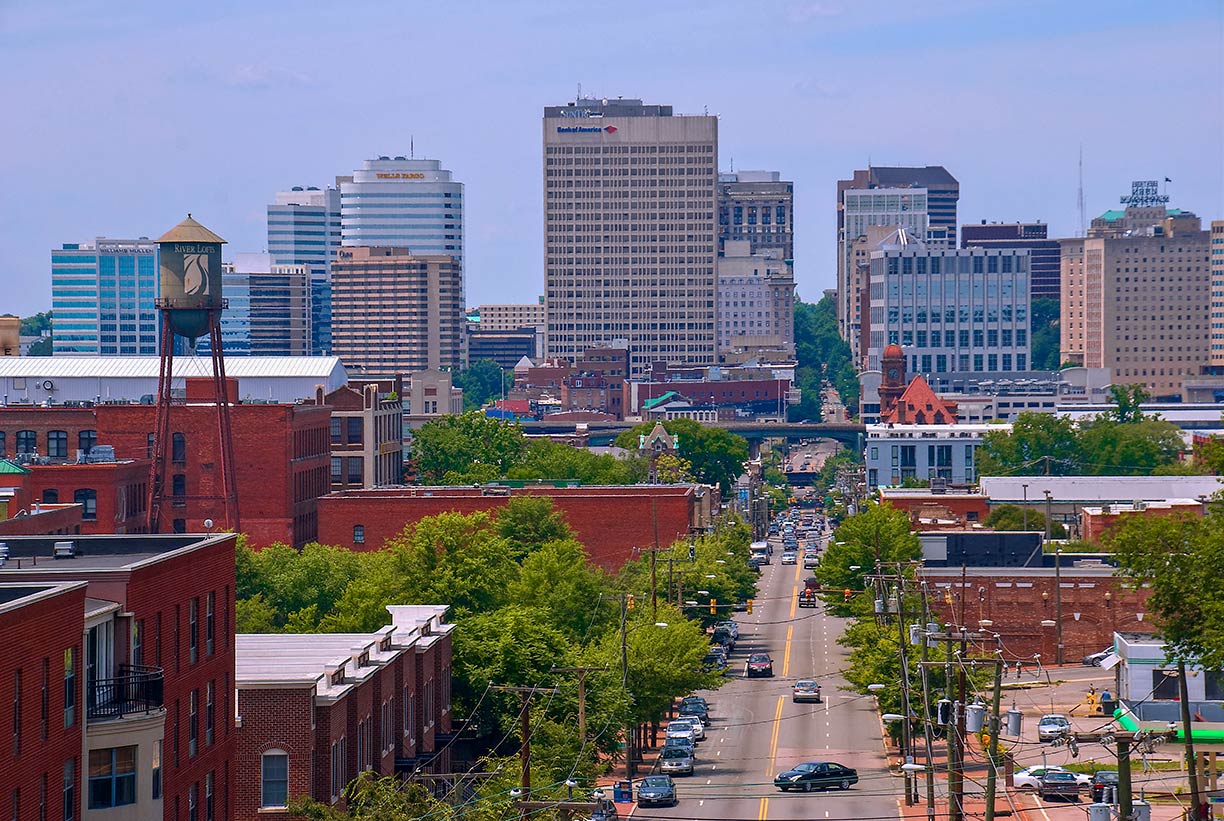 Visual arts:
Virginia Museum of Fine Arts (vmfa.museum) is a state-owned fine art museum opened in 1936; it houses a permanent collection of more than 35,000 works of art, among them, works of Art Nouveau, Art Deco, and Modern and Contemporary American art, as well as Impressionist and Post-Impressionist art.


Museums:
American Civil War Museum (acwm.org), at the Historic Tredegar site, the White House of the Confederacy Museum, the Tredegar Iron Works, and the Confederate armory. 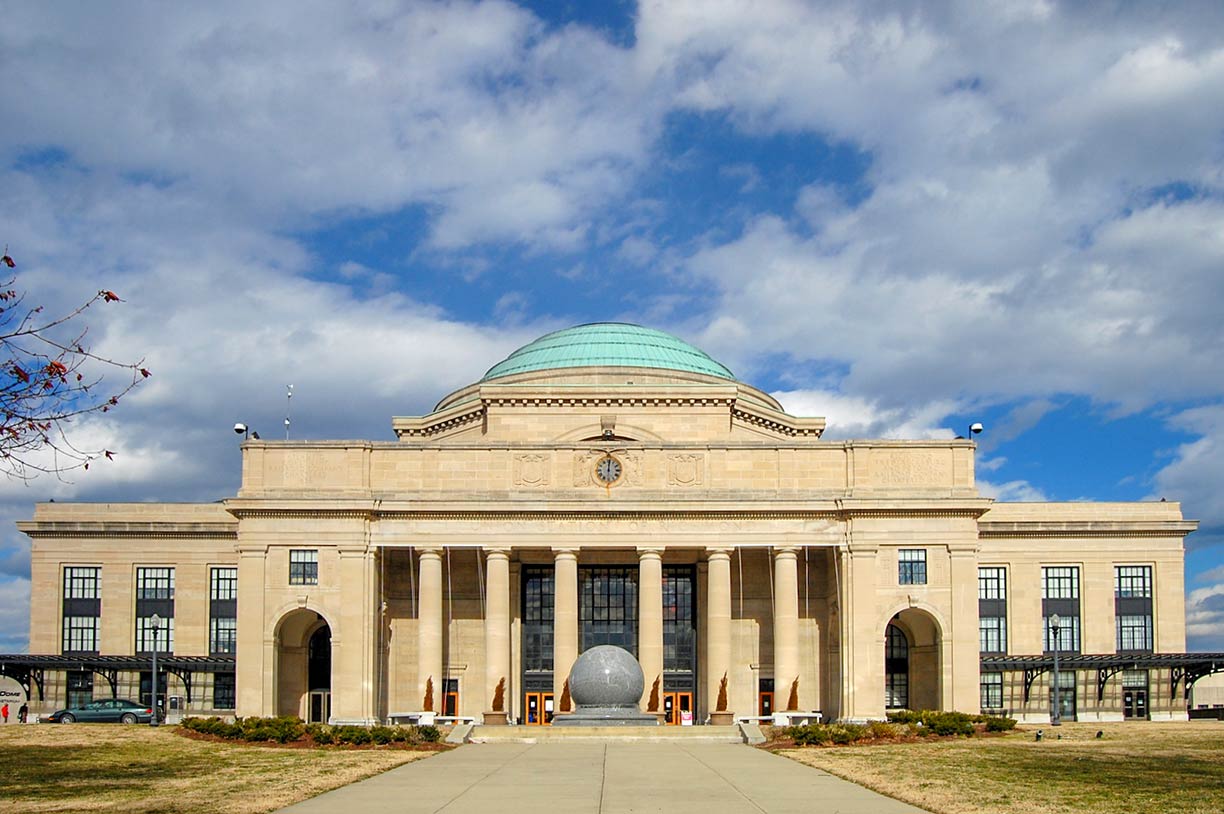 Virginia Historical Society (vahistorical.org), is a history museum located at the corner of Kensington Avenue and Boulevard in Richmond’s Museum District. The museum's signature exhibition is "The Story of Virginia" which features more than 500 artifacts and covers 16,000 years of Virginia history from prehistoric times until today.

Children's Museum of Richmond (www.c-mor.org) is the children's museum in Downtown Richmond in an Art Deco building with mixed reviews (more).

The Valentine (thevalentine.org) is a history museum and a national historic landmark. The first museum in Richmond has been collecting, preserving and interpreting Richmond’s 400-year history for over a century. 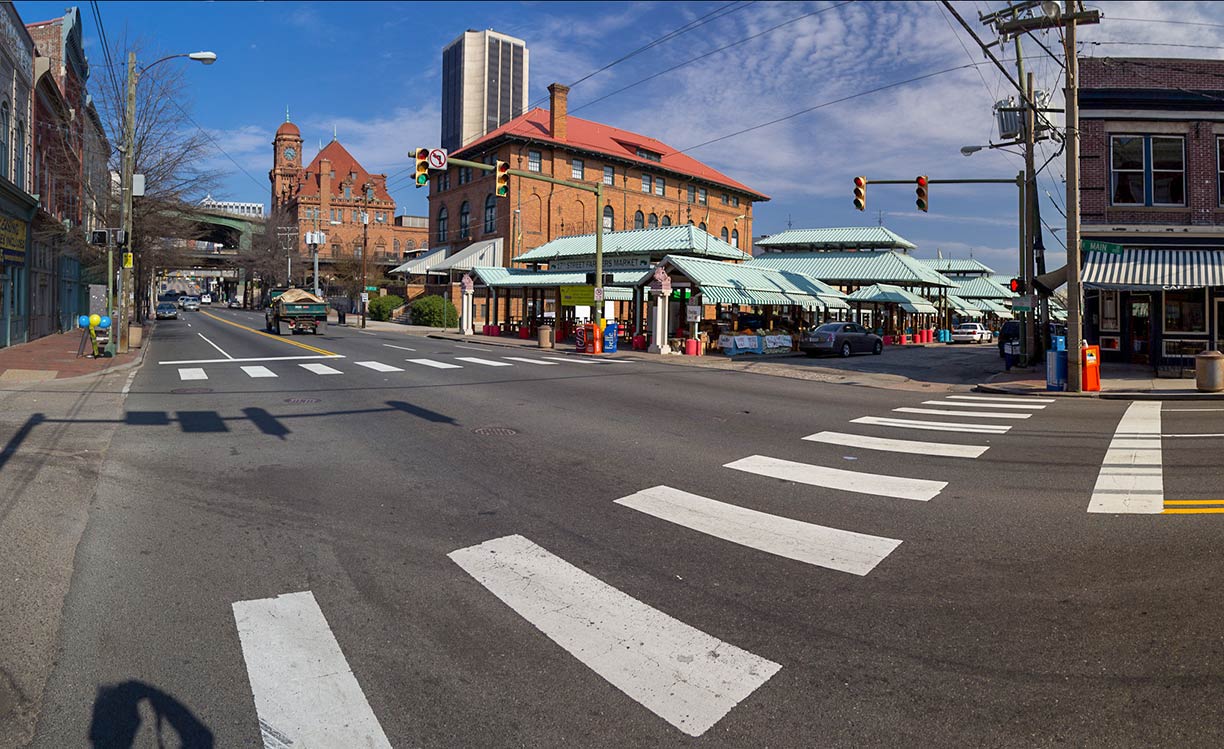 Entry to the Farmers Market in Richmond's downtown area, with Main Street Station in the background.
Image: Oleg Brovko

Churches:
St. John's Episcopal Church (www.historicstjohnschurch.org) is the oldest church in the city and a historic landmark, built in 1741. The church was the location of two essential conventions in the period leading to the American Revolutionary War. It was there where Patrick Henry gave his speech at the Second Virginia Convention, ending with the often-quoted demand, "give me liberty or give me death!"
St. Paul's Episcopal Church is a Greek Revival style church between the Supreme Court of Virginia and the Office of the Attorney General at Capitol Square.
Monumental Church is one of America's earliest Greek Revival style churches, built 200 years ago. The former Episcopal church was erected on the site of the "Richmond Theatre fire," where 72 people lost their lives on 26 December 1811.
Cathedral of the Sacred Heart (richmondcathedral.org) is a Renaissance Revival style church completed in 1905; it is the seat of the Roman Catholic Diocese of Richmond.

Hotels:
The Jefferson Hotel (www.jeffersonhotel.com) is Richmond's grand hotel; it opened in 1895. 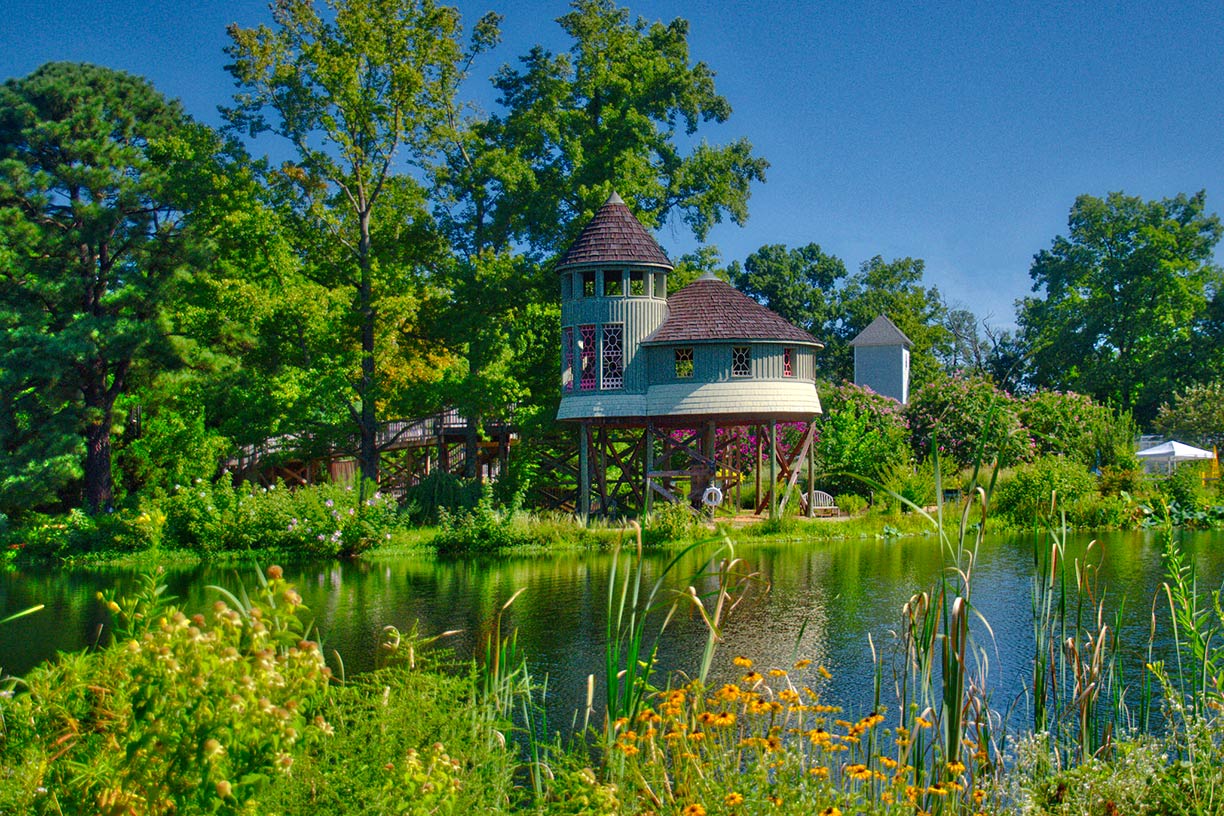 Chimborazo Park (info) is a public park; it was the site of the Chimborazo Hospital, the largest military hospital of the Confederate Army. After the end of the Civil War, the facility became a refugee camp for former slaves. Chimborazo Medical Museum is located in the northwest corner of the ground. On the south side of the compound is a stone, known as the "Powhatan Stone," commemorating Chief Powhatan (Wahunsenacah), ruler of the Powhatan empire and father of Pocahontas.

Forest Hill Park (info) is a historic urban park with a historic home, nature trails, wildlife, tennis courts, picnic shelters, and a children's playground. The site was once a quarry, an estate and then an amusement park.

Sports:
Richmond International Raceway (www.richmondraceway.com) is a race track and host to the Monster Energy NASCAR Cup Series and the NASCAR Xfinity Series.


Just zoom in (+) to see Virginia State Capitol, the seat of the state government of the Commonwealth of Virginia, the State Capitol building houses the oldest legislative body in the New World, the Virginia General Assembly, first established in 1619.

The page shows a city map of Richmond with expressways, main roads, and streets, zoom out to find the location of Richmond International Airport (IATA code: RIC), about eight mi (13 km) by road (via I-64 E) east of the city.

More about Virginia and the US

Other Cities in Virginia: