Satellite View and Map of the City of Albany, New York

Panorama of Albany, capital city of the US state of New York.
Photo: Carol M. Highsmith

The satellite view shows Albany, the capital of the State of New York in the

United States. Albany is located in the Hudson Valley, surrounded by mountain ranges. The city lies at the west bank of the Hudson River in the eastern part of New York state, about 150 mi (240 km) north of New York City and about 32 mi (52 km) south of Lake Saratoga. 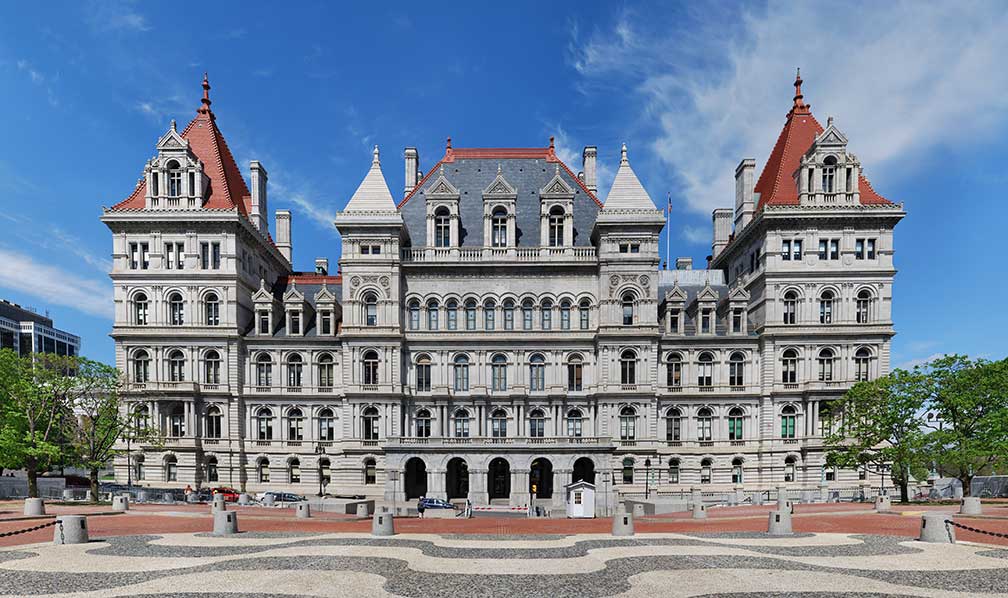 
History (short version)
In the colonial era, the town was a fur-trading center and the site of meetings between Indians and Europeans. Henry Hudson, sailing up the Hudson River in 1609, reached a point near modern Albany.

In 1614 the Dutch explorer Hendrick Christiaensen built Fort Nassau on Castle Island in the Hudson, a little south of Albany’s site. When a flood destroyed the fort in 1617, it was replaced by building Fort Orange on its present location. Seven years later a group of civilian settlers arrived. When the English took control of the colony of New Netherland in 1664, they renamed the settlement Albany. The Albany Congress of 1754, which met here, was the first attempt of the American colonists to organize a union of the colonies. Representatives from seven colonies negotiated with the Iroquois Indians and voted favorably on Benjamin Franklin’s Plan of Union, which was later rejected by colonial legislatures.

The New York state capital was moved to Albany in 1797. With the building of the Erie Canal, completed in 1825, the city grew economically. The city's river port has deep water facilities and is supporting 4,500 jobs accoss the state.

Albany is a relatively small city for a US state capital, with a population of 98,000 inhabitants (in 2018). It is the economic and cultural heart of the Capital District of New York State. The city is home to University at Albany (www.albany.edu) also known as SUNY Albany, a renowned research institution with campuses in Albany, Guilderland, and Rensselaer.

Empire State Plaza, Governor Nelson A. Rockefeller Empire State Plaza is a complex of several state government buildings, including among others The Egg, the Cultural Education Center with the New York State Museum, and the Legislative Office Building.

USS Slater (www.ussslater.org) Cannon-class destroyer escort ship is now a museum, the ship is moored on the Hudson River at the intersection of Broadway and Quay Streets. 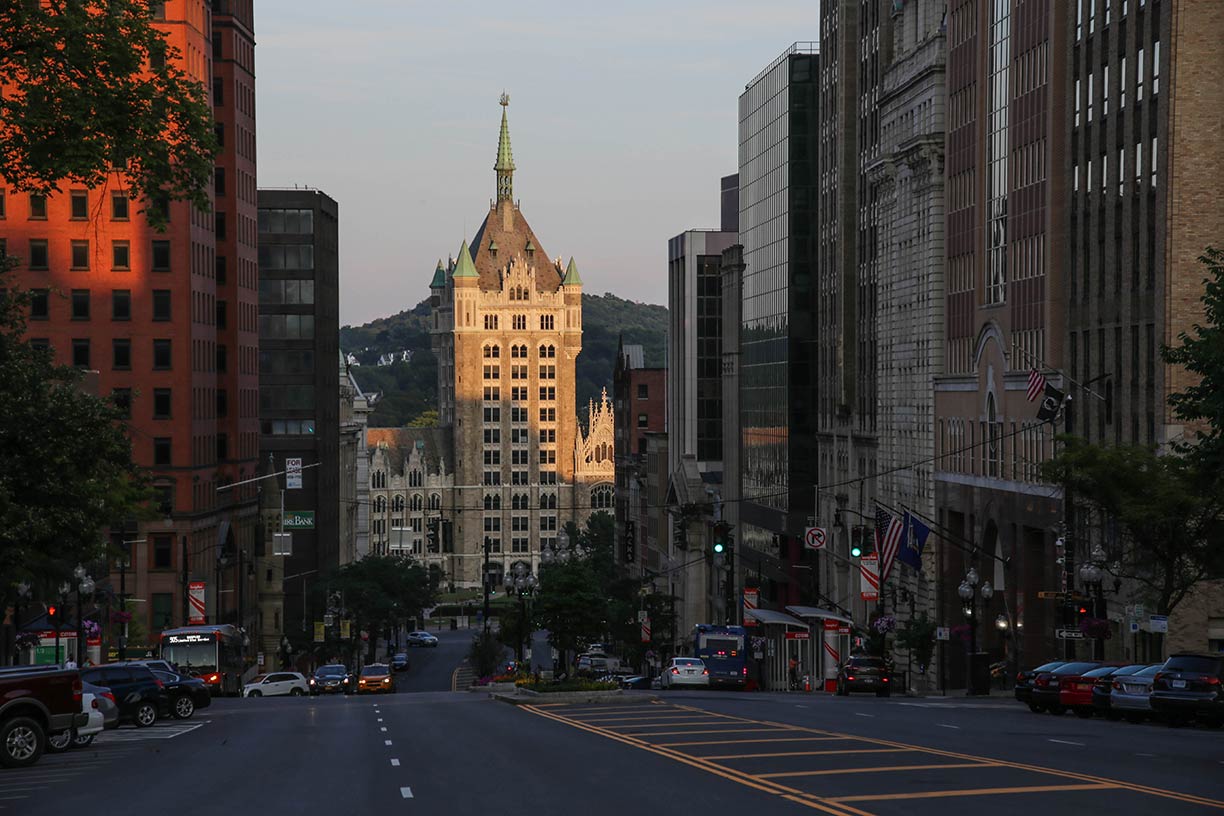 Parks:
Washington Park, is an 81 acres (33 ha) large historic city park with a lake (Washington Park Lake), the site of many events, festivals and gatherings.

Thacher State Park (parks.ny.gov/parks/128/) state park atop the Helderberg Escarpment, the site offers panoramic views of the Green Mountains in Vermont and the Taconic Mountains of the Hudson Valley.

Sports:
Times Union Center (www.timesunioncenter-albany.com) an indoor arena which can accommodate from 6,000 to 17,500 people is home to the Siena Saints MAAC basketball team (sienasaints.com) and the Albany Empire (www.thealbanyempire.com).

In 2009 Albany was awarded "All-America City 2009", the award is given by the National Civic League.


The Map shows a city map of Albany with expressways, main roads, and streets, zoom out to find Albany International Airport (IATA code: ALB) about six mi (10 km) north of Albany.
Just zoom in (+) to see Empire State Plaza with the Capitol of New York State.

More about New York and the US