Conventionally there are five main geographical regions or subregions in Africa.

Some Facts about Africa 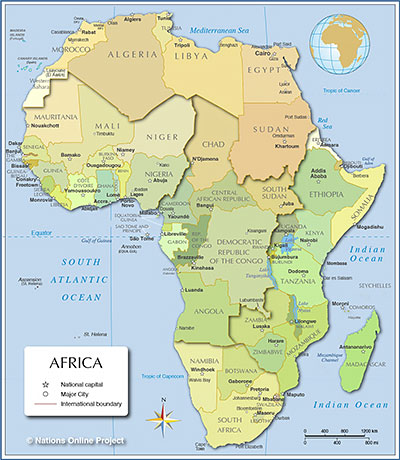 Africa is the second-largest continent in the world in both area and population. It is an almost entirely isolated landmass with only a small land bridge in the northeast, connecting the African Mainland with Western Asia.


How many countries are there in Africa?
48 countries share the area of mainland Africa, plus six island nations are considered to be part of the continent. All in all, there are 54 sovereign African countries and two disputed areas, namely Somaliland and Western Sahara (see the list of African countries below).


Population
An estimated 1.3 billion people live in the second-largest continent, representing about 14 percent of the world's population (as of 2019). By far the most populous country in Africa is Nigeria, with a population of more than 190 million.
(Source: UN World Population Prospects) 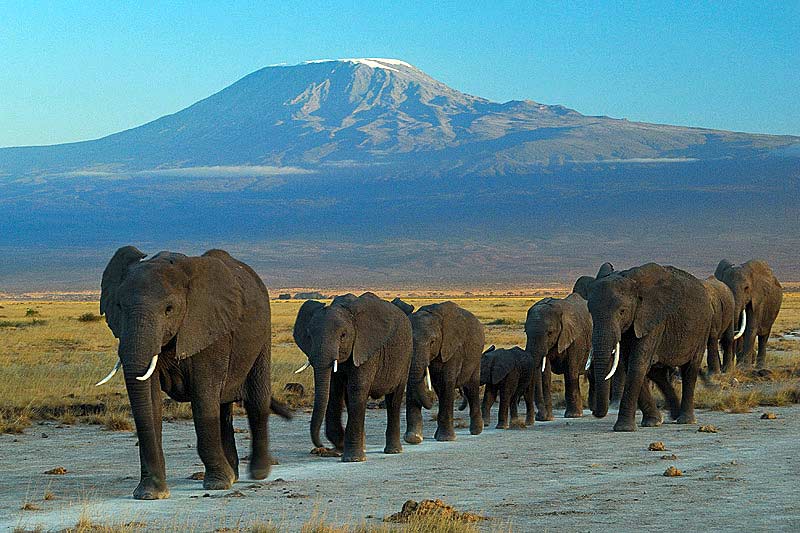 Africa's highest mountain is located in Tanzania. The three million year old stratovolcano Mount Kilimanjaro has a height of 5,895 m (19,340 ft). The mountain has three volcanic cones Kibo, Mawenzi, and Shira. Uhuru Peak on Kibo is the mountain's highest point.
The Batian peak of Mount Kenya at 3,825 m (12,549 ft)  is Africa's second-highest mountain.

Largest Lake
Lake Victoria or Victoria Nyanza is the largest of the African Great Lakes and the second-largest freshwater lake in the world. The source of the Nile River has a surface area of 68,800 km² (26,600 sq mi); it is shared by Uganda, Kenya, and Tanzania. [1]

Longest River
Africa's longest river is the Nile; it is with 6,695 km, also the longest river in the world. The Nile flows from its source south of the equator through eleven countries and empties into the Mediterranean Sea.

Languages of Africa
There are about a thousand languages spoken on the continent, classified in four (or six) major language families:
Afro-Asiatic (e.g., Berber language), Nilo-Saharan, Niger-Congo (Bantu), and Khoi-San. (see also: Languages of Africa)

Physical Regions
Major physical regions in Africa are the Atlas Mountains, the Sahara Desert, the semiarid Sahel, the tropical Sudanian Savanna, also known as the African Savanna, the Nile and the Congo rivers, the Victoria Falls, the Ethiopian Highlands, the Ituri Rainforest in Central Africa, the African Great Lakes, the Great Rift Valley, the Namib, and the Kalahari deserts.

Map of North Africa, the Middle East, and the Arabian Peninsula

Searchable Maps of Countries and Capital Cities of Africa