Satellite View and Map of the City of Lincoln, Nebraska

View of the skyline of Lincoln, Nebraska with the tower of the state capitol to the right.
Image: Hanyou23

The satellite view shows Lincoln, the second most populous city (behind Omaha) and the capital of the State of Nebraska, a Midwestern state encompassing the prairies of the Great Plains in the

United States. Lincoln is also the county seat of Lancaster County; the city is located in the southeastern part of the Cornhusker State (Nebraska's nickname). 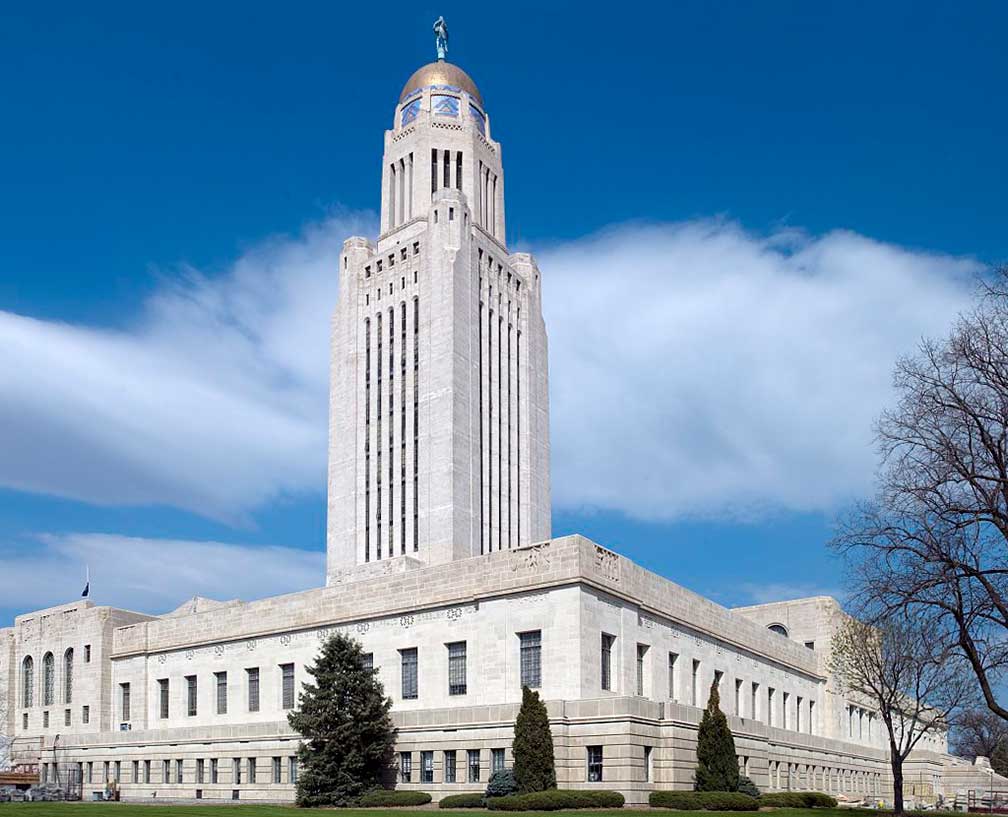 The town was founded in 1859 when settlers platted an area on the east bank of Salt Creek and named it Lancaster. The idea was to harvest salt from the small saline wetlands of the region. Salt was a precious commodity on the prairie in that time.

In 1867, Nebraska became the 37th state, and the government was searching for a decent capital in a more central location than Omaha was. A commission consisting of three men voted for Lancaster; said and done; in the process the village was thereby renamed after the sixteenth President of the United States, Abraham Lincoln.

To ensure a firm economic and social foundation for the capital, Nebraska's government located not only state institutions in Lincoln but also other major state facilities, a university, a prison, and an insane asylum.

Today, Lincoln is a mid-sized American city with a population of 285,000 inhabitants (in 2018), 323,500 people live in Lincoln's metro area.
The city is home to the University of Nebraska (UNL), the public research university is Nebraska's oldest and largest university, founded in 1869.

Lincoln's economy is based on the service and manufacturing industries. Major employers are the government and the University of Nebraska. Other major industries are high tech, information technology, health, education, and transport. 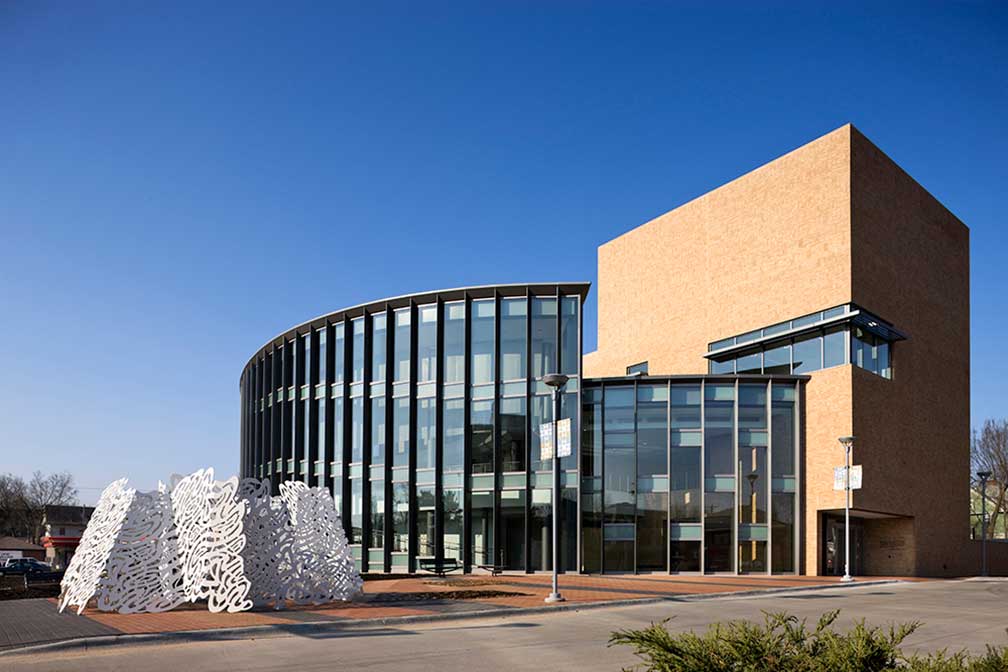 International Quilt Study Center and Museum, to the left the sculpture "Reverie" by Linda Fleming.
Image: University of Nebraska–Lincoln
Historical places:
Nebraska State Capitol (capitol.nebraska.gov) the city of Lincoln's latest (third) state capitol building, with Art Deco, Neo-Byzantine, and Gothic Revival style elements, built in the 1920s. It is the seat of Nebraska's government and the unicameral Nebraska Legislature.

It was the first state capitol to incorporate a skyscraper into its design, it is the second tallest capitol building in the US, after Louisiana State Capitol in Baton Rouge.

Great Plains Art Museum (museum info) the fine arts museum is part of the Center for Great Plains Studies (University of Nebraska). Arts of the Great Plains is on display.

Other museums:
International Quilt Study Center and Museum (www.quiltstudy.org), a quilt museum with one of the most extensive collections of quilts in the world. 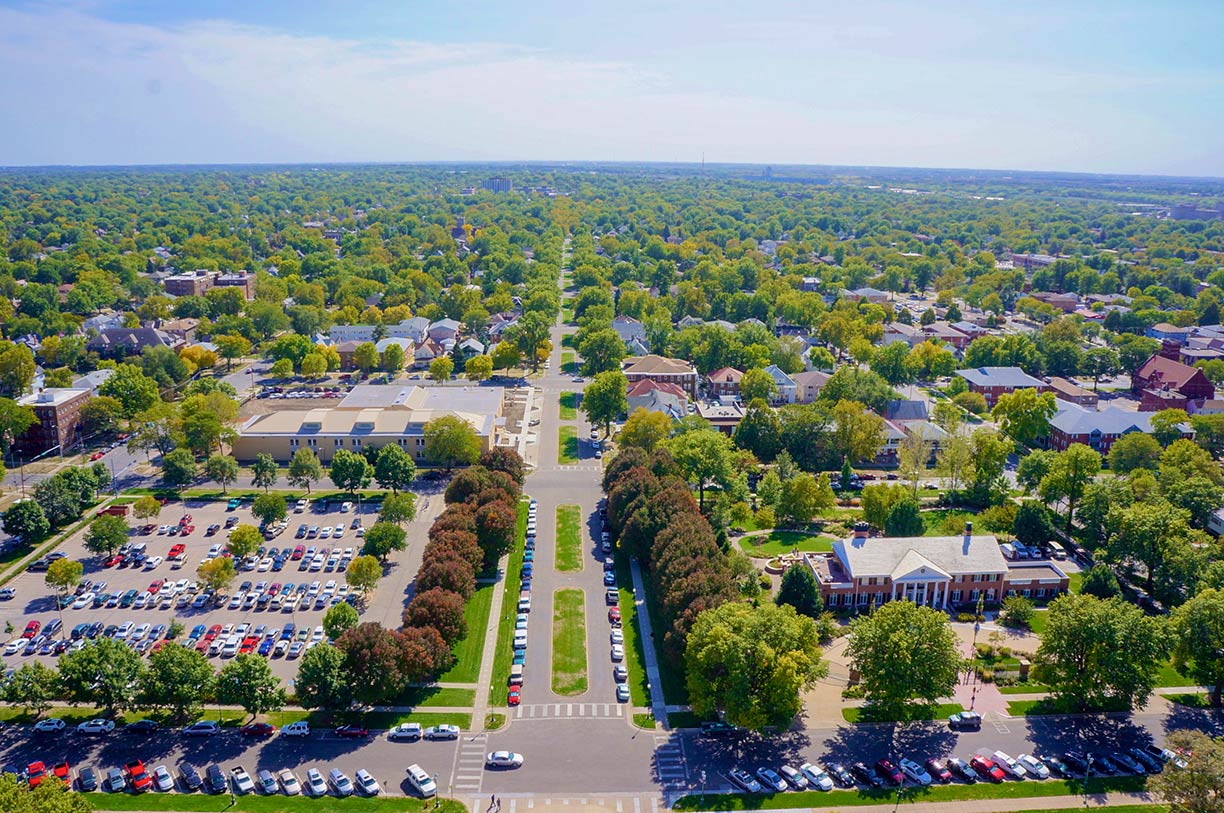 View of south Lincoln from the top of the Nebraska State Capitol. You still can imagine the prairies of the Great Plains.
Image: Collin Ulness
The University of Nebraska State Museum (museum.unl.edu/research/) also known as the Elephant Hall (Morrill Hall), is a natural history museum that features interactive paleontology exhibits, ancient life and evolution exhibits, and a dinosaur gallery; the museum was established in 1871.

Lester F. Larsen Tractor Museum (tractormuseum.unl.edu), it's all about traction; it is the only tractor testing museum in the world.
Frank H. Woods Telephone Museum, the museum features the history of the telephone and the telephone industry.

Parks:
Sunken Gardens (info page) garden with two reflecting pools and a cascading waterfall. It is the only Nebraska garden listed in the "300 Best Gardens to Visit in the United States and Canada".

Outdoors:
MoPac Trail, the former corridor of the Missouri Pacific Railroad's Omaha Belt Line is now a recreational bicycling, equestrian, and walking trail.
Holmes Lake Recreation Area is a lakeside park with a public golf course and an observatory.

Sports and events:
Memorial Stadium Lincoln, 'The Sea of Red' is an American football stadium on the campus of the University of Nebraska–Lincoln, it is the home field of the Nebraska Cornhuskers American football team (www.huskers.com).
Pinnacle Bank Arena (www.pinnaclebankarena.com), a 15,000-seat indoor arena for sports and concerts.
Bob Devaney Sports Center, a sports complex with three different facilities on the campus of the University of Nebraska.

Just zoom in (+) to see Nebraska State Capitol, one of three of America's skyscraper state capitol buildings. It is a National Historic Landmark and houses the executive, judicial, and legislative offices of the U.S. State of Nebraska.

The page shows a city map of Lincoln with expressways, main roads, and streets, zoom out to find the location of Lincoln Airport (IATA code: LNK), about 6.4 mi (10 km) by road, northwest of the city center.

More about Nebraska and the US

External Links:
Lincoln
Official website of the city of Lincoln.