Satellite View and Map of the City of Columbus, Ohio

The satellite view shows Columbus, the county seat of Franklin County; it is the largest city and the capital of Ohio, a state bordering Lake Erie in the north in the northeastern

United States. Columbus is located in Central Ohio at the confluence of the Scioto and Olentangy rivers, about 100 mi (170 km) northeast of Cincinnati, and 145 mi (230 km) southwest of Cleveland. 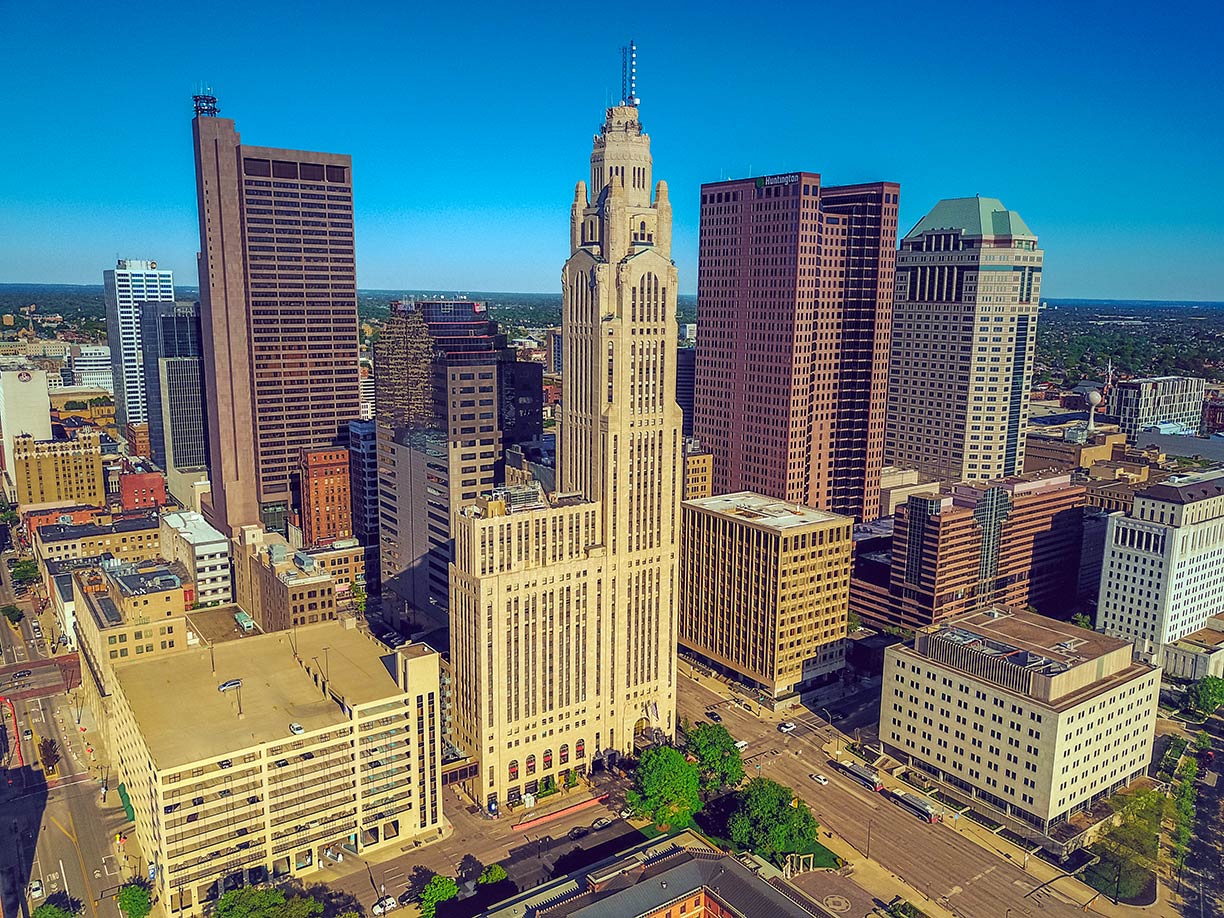 
In 1763 the Treaty of Paris made Ohio Country part of the British Empire.
In 1797, Franklinton (now a neighborhood in Columbus) became the first American settlement at the confluence of the Olentangy and Scioto Rivers.

Ohio achieved statehood in 1803 and was in need of a capital. The state legislature decided to build a new city in the center of Ohio, preferably near major transportation routes, at that time primarily rivers.

The city was founded in 1812 on the "High Banks," a bluff overlooking a bend in the Scioto River, opposite Franklinton, and named in honor of Christopher Columbus, the Italian explorer who discovered the sailing route to the New World.

Today, Columbus is the 14th-largest city in the US with a population of about 880,000 inhabitants (2018), more than 2 million people live in the Columbus Metropolitan Statistical Area.
The city is the seat of the government of Ohio.

The economy of the metropolis relies on education, government, insurance and banking, aviation and defense, textile manufacturing and clothes, healthcare research and industry, technology, and services.

The city is home to several colleges and universities. The Ohio State University (www.osu.edu), or Ohio State (OSU), is the highest ranked public university in Ohio and one of the largest universities in the United States. The Columbus State Community College (www.cscc.edu), with its main fields in Health Science, Liberal Arts, and Business. The Columbus College of Art & Design (www.ccad.edu), is one of the oldest private art and design colleges in the United States. 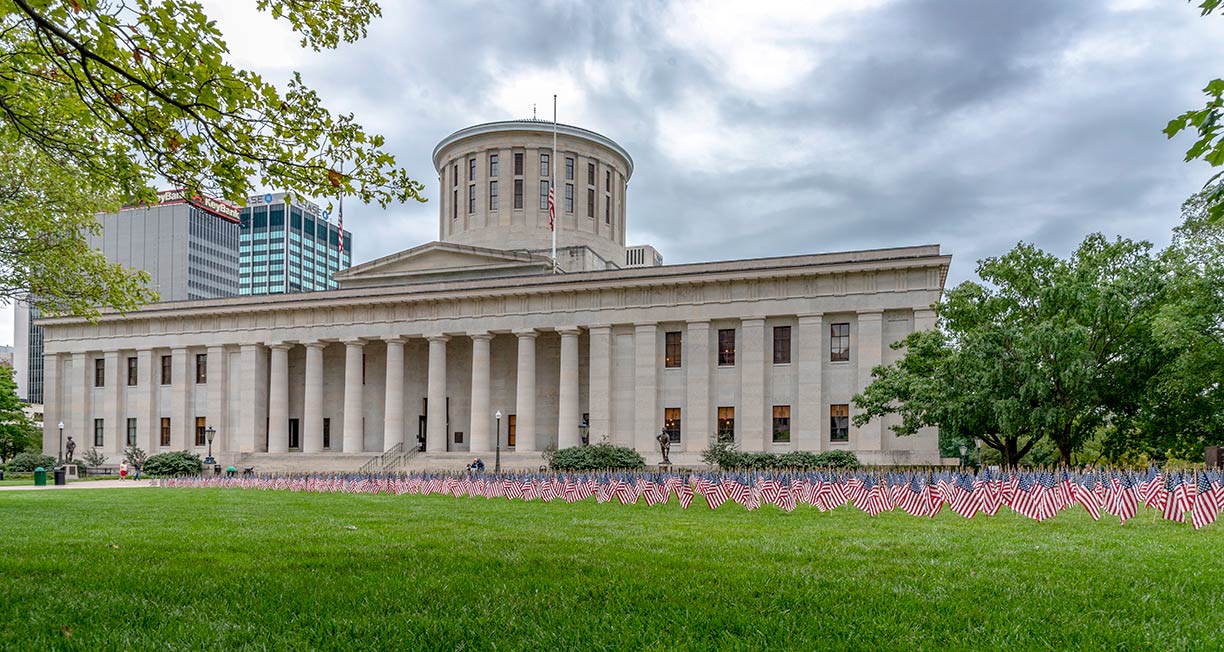 Ohio Statehouse located on Capitol Square in Columbus, Ohio. On the 11th September 2018, 2,977 flags were placed on the lawn of the Ohio Statehouse in memorial to the life that was lost on this day in 2001.
Photo: Sixflashphoto


The Ohio Statehouse (www.ohiostatehouse.org), the Greek Revival style state capitol in Columbus was completed in 1861; it houses the bicameral Ohio General Assembly, consisting of the House of Representatives and the Senate.

Thurber House (www.thurberhouse.org) historic house and former home to James Thurber, an American cartoonist, and author; today the house is gathering place for readers and writers, and home to the annually Thurber Prize for American Humor.

The LeVeque Tower
The 47-story Art deco skyscraper houses a hotel and a theater; it opened as the American Insurance Union Citadel in 1927, it is still the second tallest building in the city.

The Short North is a neighborhood centered on the main strip of High Street with bars, contemporary galleries and the Wexner Center for the Arts. Short North also has a lively LGBT community and hosts the annual Columbus Pride parade (columbuspride.org) on High Street between Goodale Park, Genoa Park and Bicentennial Park. 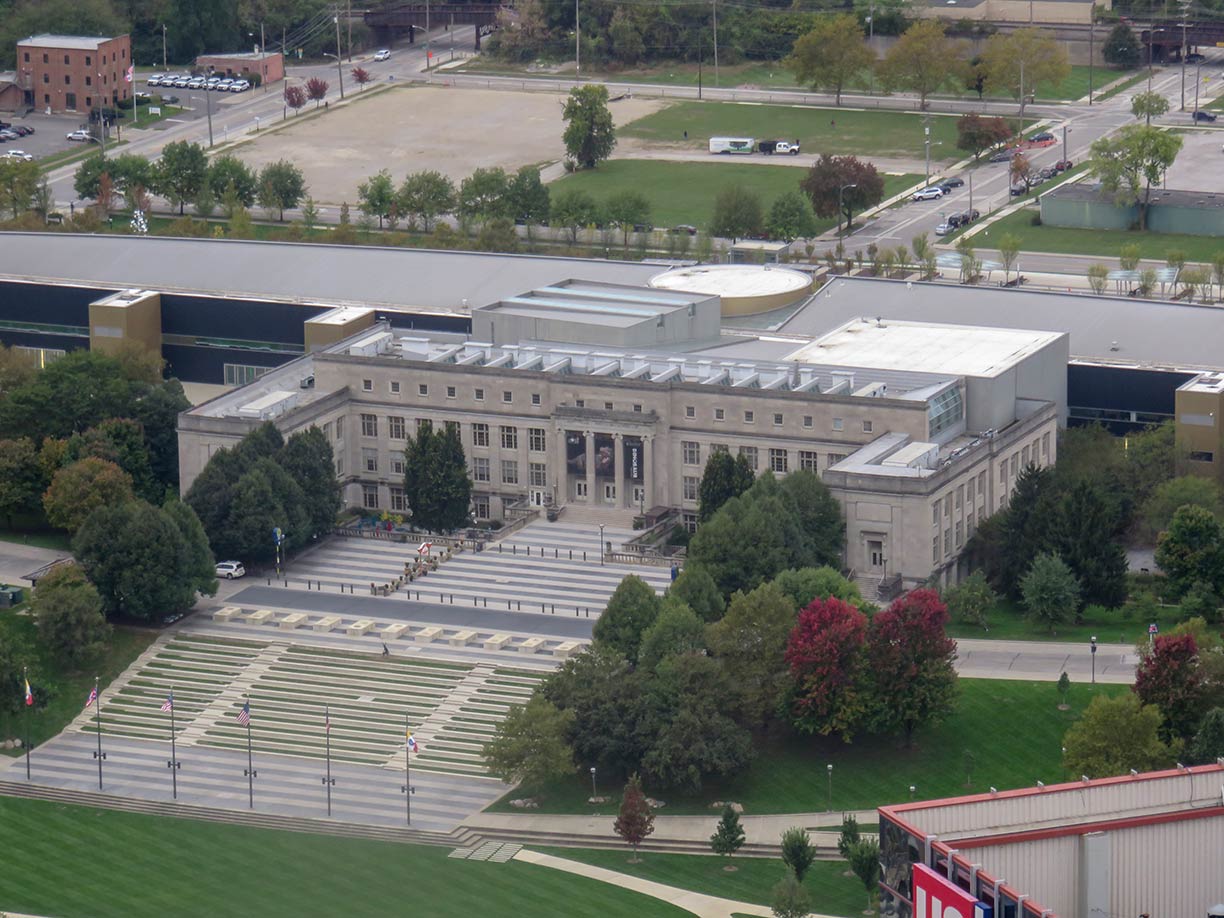 COSI (cosi.org), the Center of Science and Industry is a huge educational science center with a museum that has a Dinosaur Gallery and a planetarium; the center offers interactive exhibits, working labs, and planetarium shows.

Ohio History Connection (www.ohiohistory.org), the organization operates dozens of state historic sites across Ohio. Its headquarters is the Ohio History Center, also a museum, a library and an archive of Ohio history, located near the compounds of the Ohio Expo Center and State Fair.

Ohio Village (www.ohiohistory.org/visit/ohio-village), a living history museum with an interactive re-creation of a 1860s town.

National Veterans Memorial and Museum (www.nationalvmm.org); NVMM is the first-of-its-kind museum, telling the stories of US veterans, their families, and the fallen heroes. The museum opened in October 2018. 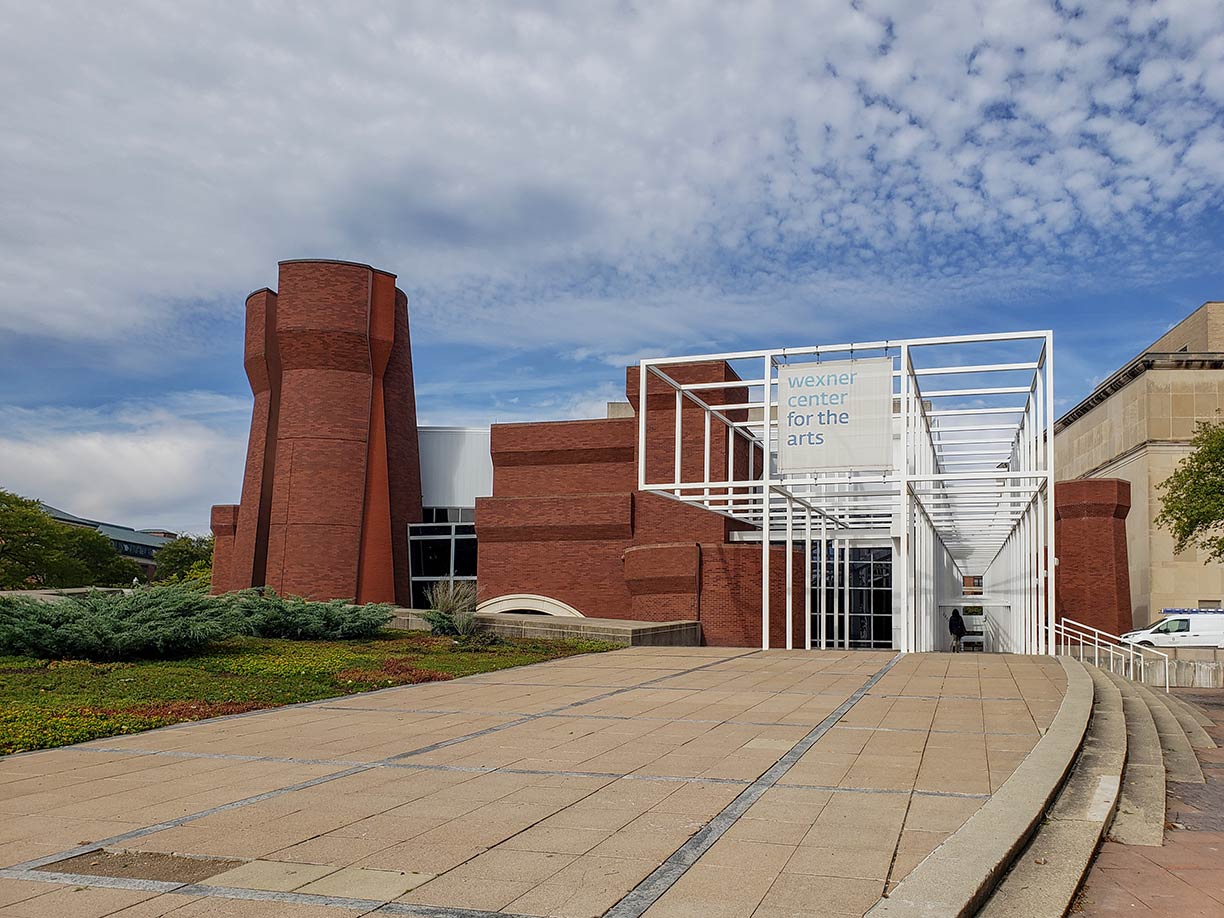 Wexner Center for the Arts (wexarts.org), university hub for modern art, a multidisciplinary laboratory for the exploration and advancement of contemporary art.


Concerts and performing arts:
Columbus Symphony Orchestra (www.columbussymphony.com) is the oldest performing arts organization in the city and the only full-time professional symphony in central Ohio.

EXPRESS LIVE! (www.promowestlive.com) is a multi-purpose indoor and outdoor concert venue located in the Arena District.

Columbus Association for the Performing Arts (www.capa.com) is a non-profit arts and theater management organization which runs the Columbus Performing Arts Center, the Ohio Theatre, the Southern Theatre, and the Palace Theatre, a restored movie palace built in 1926, and now a multi-use performing arts venue.

Shopping:
Easton Town Center (eastontowncenter.com), indoor and outdoor shopping complex and mall.
North Market (www.northmarket.com) two-floor market with a mixture of farm products, retail, and food stands, and there is a Farmers Market every weekend during the growing season.
Polaris Fashion Place (polarisfashionplace.com) a two-level pet-friendly massive shopping mall with a play area for kids and a food court.

Fun:
Columbus Zoo and Aquarium (www.columbuszoo.org), about 20 mi (30 km) by road north of downtown at the southern end of the O'Shaughnessy Reservoir; wildlife viewing in eight regions of the world, more than 7,000 animals and an enormous parking lot.


Fairs and festivals:
Ohio State Fair (ohiostatefair.com), is one of the largest state fairs in the United States, held in Columbus from late July through early August.

Field of Corn (with Osage Orange Trees)
Publicly funded art installation in the city of Dublin, an unquestionably unique park with huge concrete corn sculptures, the site is also known as "Cornhenge."

Green Belt Network is a network of six Green Belts winding through the urban fabric of the city; the recreation areas are under development by Columbus Recreation and Parks.

Olentangy Trail is a trail along the Olentangy River, leading from Worthington to downtown Columbus. 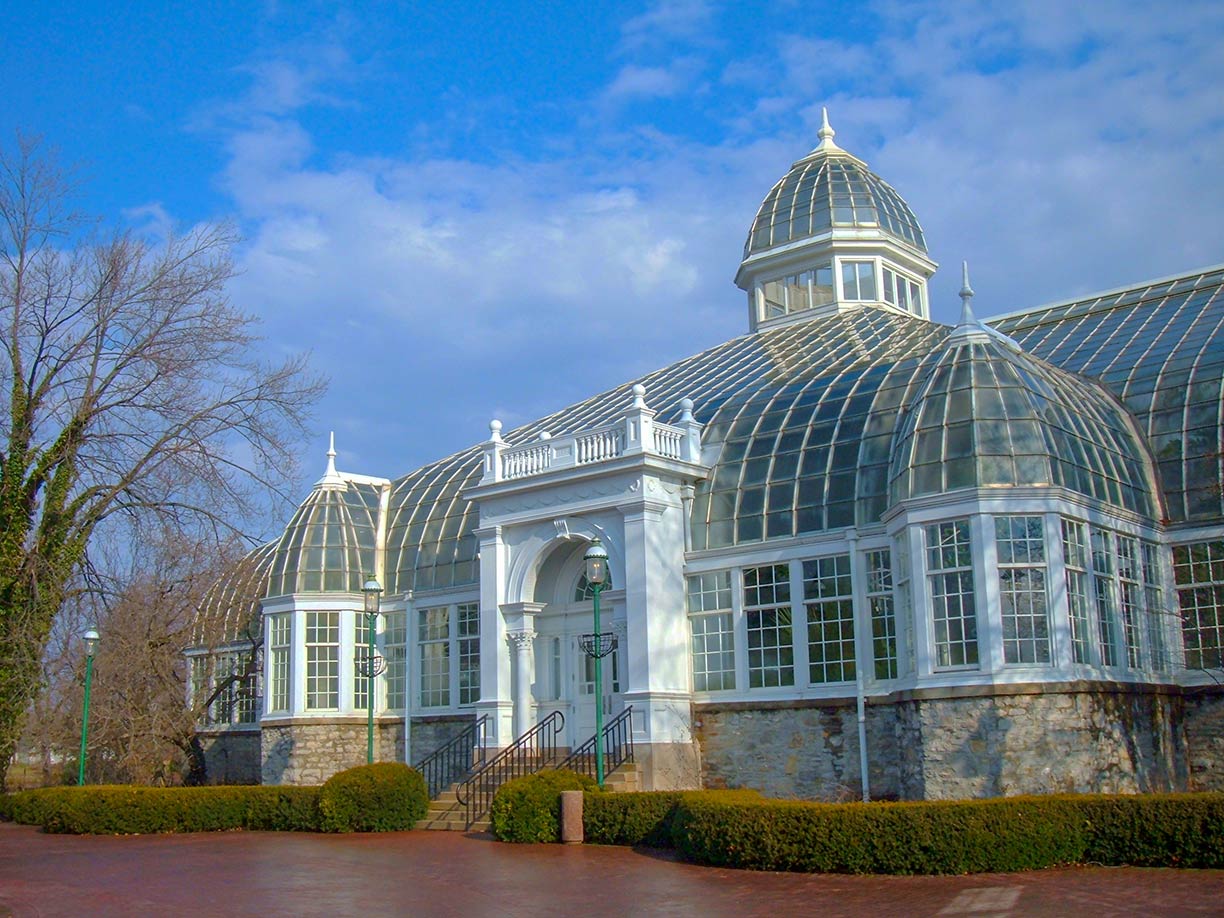 Goodale Park is a landscaped public city park in the Victorian Village area with a skyline view.

Scioto Greenway (www.sciotomile.com), an urban reclamation and redevelopment project with a $36 million price tag, turned the once industrial landscape at the riverbank into a scenic green riverside area in downtown Columbus with a bird habitat, several parks with paved trails for biking, in-line skating, and running, plus places for hiking, fishing, volleyball, and a climbing wall.

Topiary Park (www.topiarypark.org) park featuring sculptured shrubs, it is 'a landscape of a painting of a landscape' adjacent to the Columbus Metropolitan Library (www.columbuslibrary.org).

Columbus Park of Roses (www.parkofroses.org) a landscaped public garden created in 1953 and now includes 400 varieties of roses. Best time to visit is late May when the Heritage Rose Garden is in full bloom.

Bicentennial Park, a riverside urban green space with a one-of-a-kind fountain, an outdoor stage, and a restaurant, traditionally one of Columbus' most popular parks. 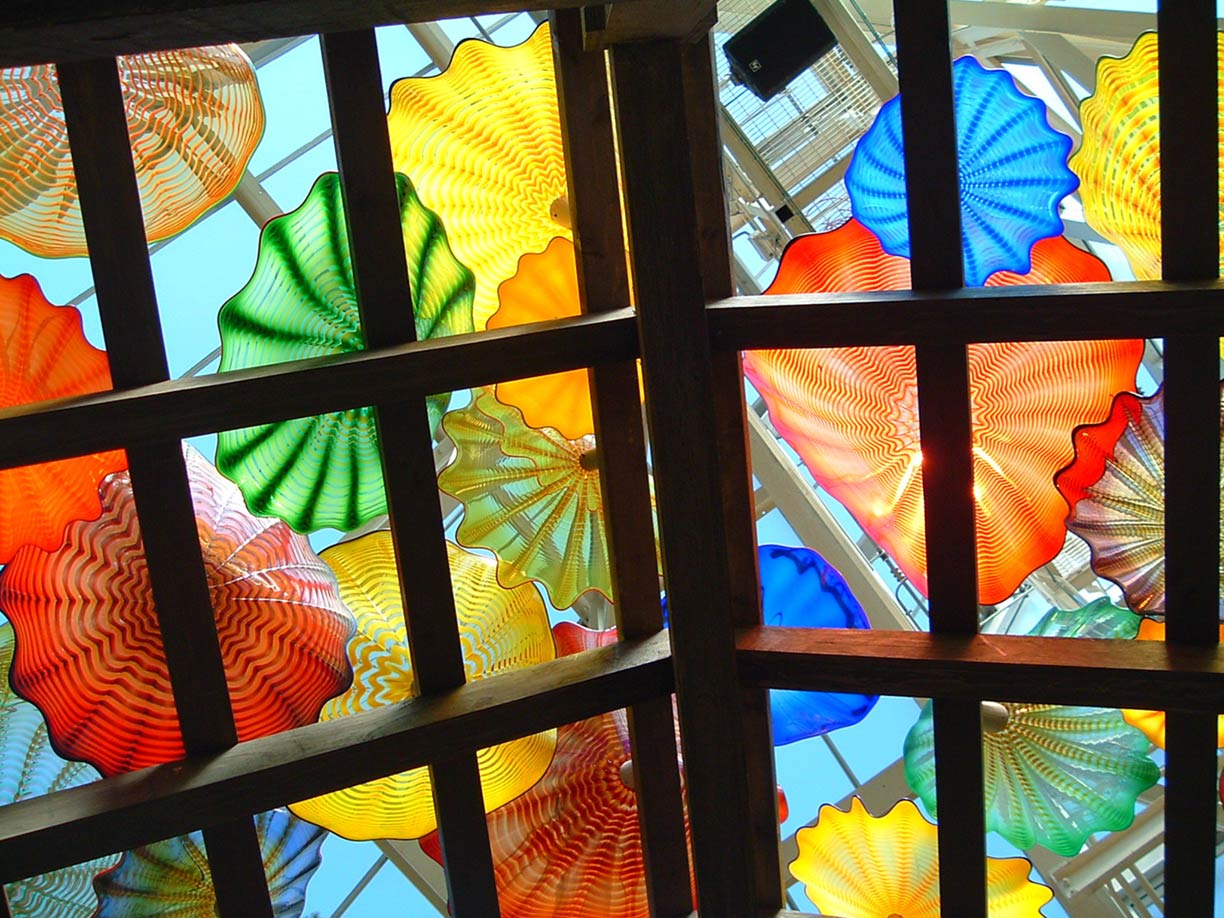 
Schiller Park, the second oldest park in the city, is a recreation area in the German Village, in the park is a fishing pond, an open-air stage, and a statue of German poet Friedrich von Schiller in the center of the park.

Chadwick Arboretum (chadwickarboretum.osu.edu) the arboretum on the Agriculture campus of The Ohio State University showcases a variety of native and non-native plants and trees. 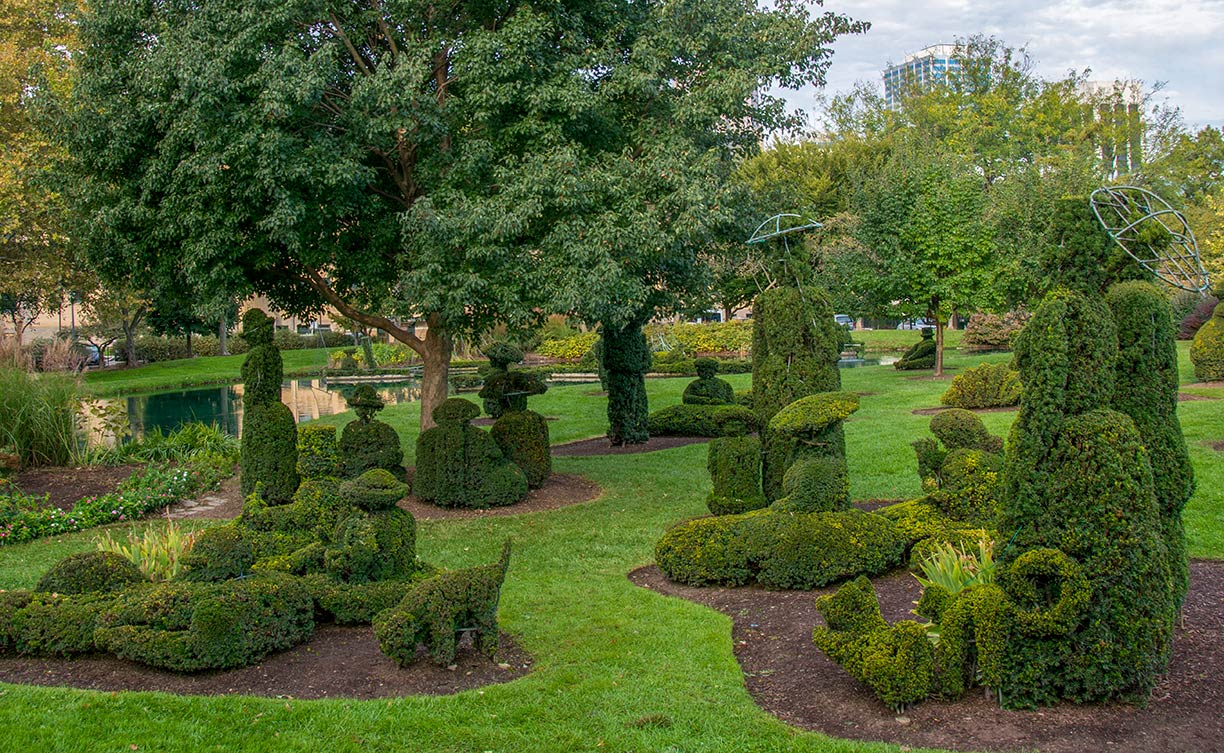 Topiary Park in the Discovery District of Columbus. The topiary garden is designed to resemble figures in George Seurat's 1884 painting, A Sunday Afternoon on the Island of La Grande Jatte.
Photo: Ɱ

Antrim Park is a 120-acre recreation destination with several athletic fields and a section of the Olentangy Greenway Trail.

Battelle Darby Creek Metro Park, half an hour from downtown Columbus; it is the largest Metro Park; 7,000+acre of restored prairie areas with forests, rivers, creeks, and bison.

Blendon Woods Metro Park is a Metro park with a waterfowl refuge, nature observations, and a nature learning center with mounted animals on display, there is a disc golf course, and ice skating, sledding, and hiking trails.

Highbanks Metro Park lies to the north of the city, a National Natural Landmark and the most visited park in the Metro Park system, featuring a complex of Native American earthworks and hiking trails.

Hayden Falls Park is a park with gorge and a 35-ft waterfall with a viewing platform.

Indian Run Falls, green space with two waterfall and nature trails. The cascades are most impressive after rain or in Spring.

Prairie Oaks Metro Park, dog-friendly sprawling grasslands with a creek and lakes for boating and fishing.


Sports:
Arena District is a commercial and residential area around Nationwide Arena at the site of the former Ohio Penitentiary.

MAPFRE Stadium (www.mapfrestadium.com), the soccer stadium just north of the Ohio Expo Center and State Fairgrounds, is home to the Columbus Crew SC.

Just zoom in to see Ohio Statehouse, completed in 1861. The Greek Revival building houses the Ohio General Assembly and the ceremonial offices of the Governor.

More about Ohio and the US

Other major cities in Ohio: