Satellite View and Map of the City of Annapolis, Maryland

United States Naval Academy in Annapolis. The domed roof of the Naval Academy Chapel on the left, the tower of Mahan hall in the center. The military college was founded in 1845.
Image: WPPilot

The satellite view shows Annapolis, a port city on the western coast of Chesapeake Bay. It is the seat of Anne Arundel County, and the capital of Maryland, a state located in the Mid-Atlantic region of the

US. The town is located about 48 km (30 mi) south of Baltimore and 32 mi (50 km) east of Washington D.C., at the mouth of the Severn River at the Chesapeake Bay, a large serrated sea arm reaching inland from the Atlantic Ocean. 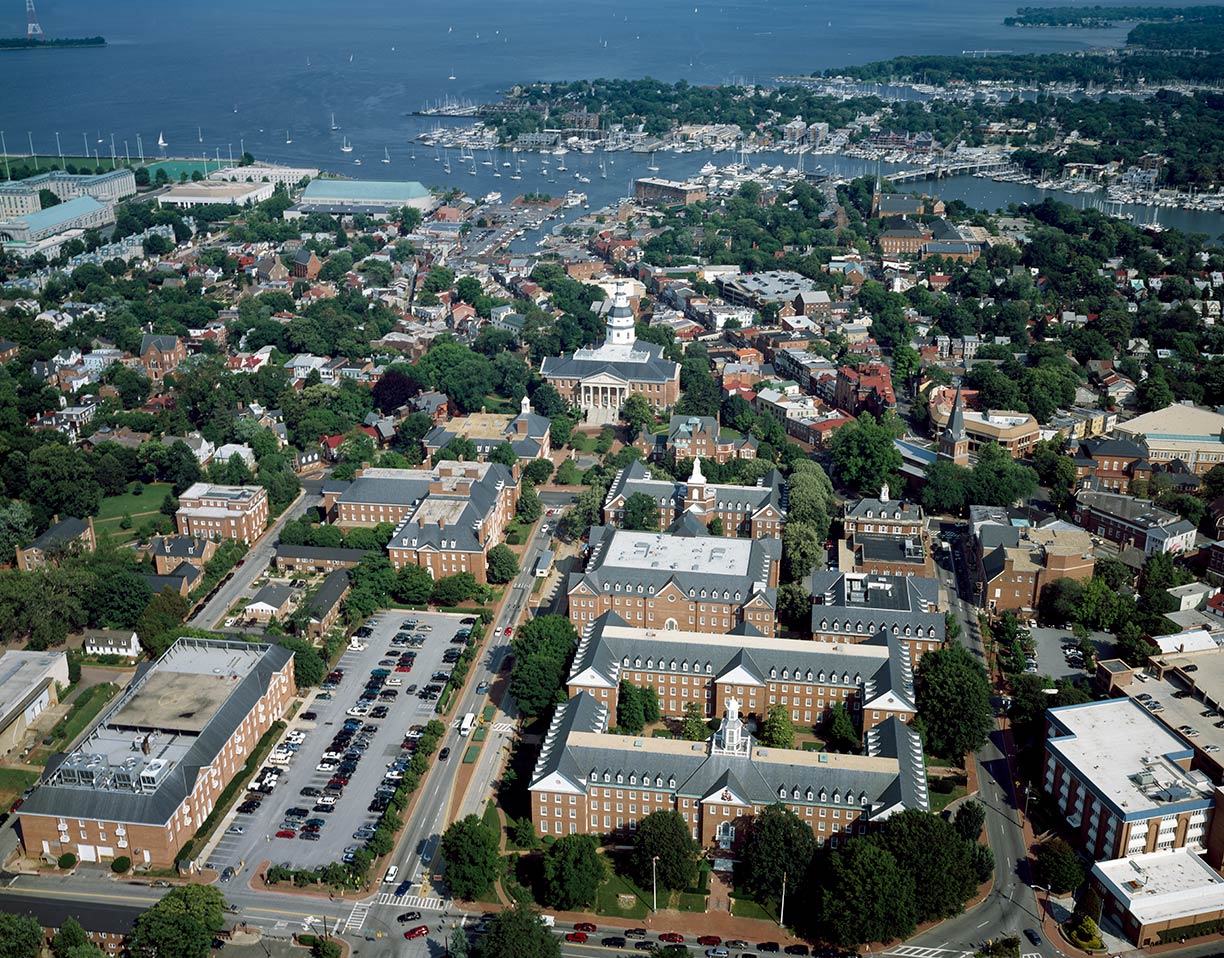 
The town was founded on the north shore of the Severn River in 1649 by Puritan exiles from Virginia; the settlement was then known as Providence.

This small town was the stage of some significant events in American History. According to Alex Haley, Kunta Kinte, who was kidnapped in the Gambia in 1767 and transported to Annapolis in the Province of Maryland to be sold as a slave. Kunta Kinte is the central character in Haley's book Roots: The Saga of an American Family. The book made Haley to one of the United States' best-selling African-American authors.

In reality, Annapolis was a major center of the Atlantic slave trade and became very wealthy. But the city's commercial success declined rapidly after Baltimore, with its deeper harbor, was made a port of entry in 1780.

It was only in 1864 that the Maryland Constitution outlawed the practice of slavery; the convention that drafted the document assembled on 27 April 1864 in the Maryland State House in Annapolis. 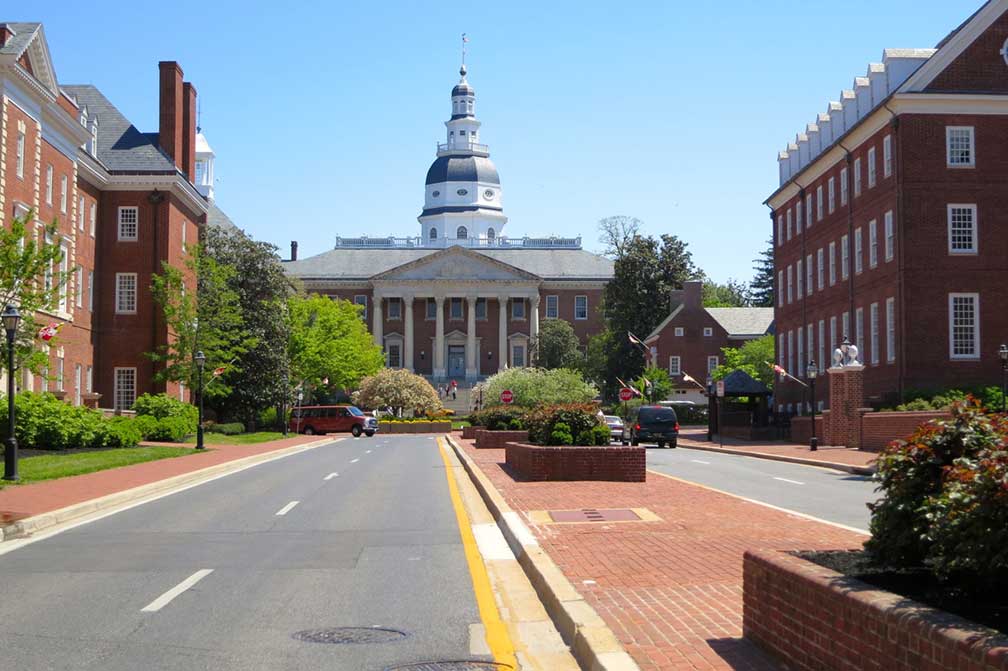 Maryland State House. It is the oldest state capitol in continuous legislative use, completed in 1779. It houses the Maryland General Assembly and offices of the Governor and Lieutenant Governor.
Photo: Frank DiBona


The Treaty of Paris, signed on the 3rd September 1783 by the US and Great Britain, ended the American Revolution. In November 1783 Annapolis became the temporary capital of the fledgling United States (from 26 November 1783 to 19 August 1784).
It was also in Annapolis on the 23rd December 1783 that General Washington voluntarily resigned as Commander in Chief of the Army.
Also in that year, the Governor of Maryland commissioned John Shaw, a local cabinet maker, to create an American flag. The present-day U.S. flag is based on John Shaw's design.


Annapolis is one of the small US State capitals, with a population counts of about 38,000 souls.
The city is home to St. John's College, the United States Naval Academy, the United States Sailboat Show, and a Yacht Club. The town is the home port for a large number of sailing vessels and pleasure boats. 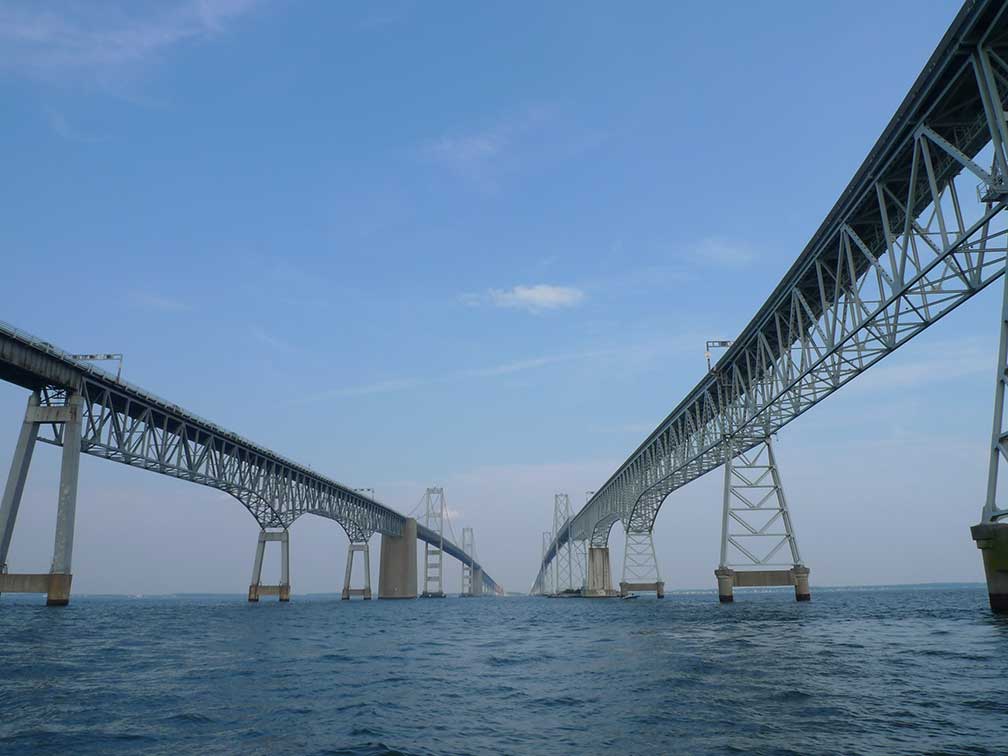 
Even so, the capital is small there are some attractions to see:

Maryland State House, the oldest state capitol in continuous legislative use, from the 18th century until now, and the Government House home to the Governor of Maryland since 1870.

Thomas Point Shoal Lighthouse (www.thomaspointlighthouse.org) is a historic lighthouse in the Chesapeake Bay, constructed in 1875. 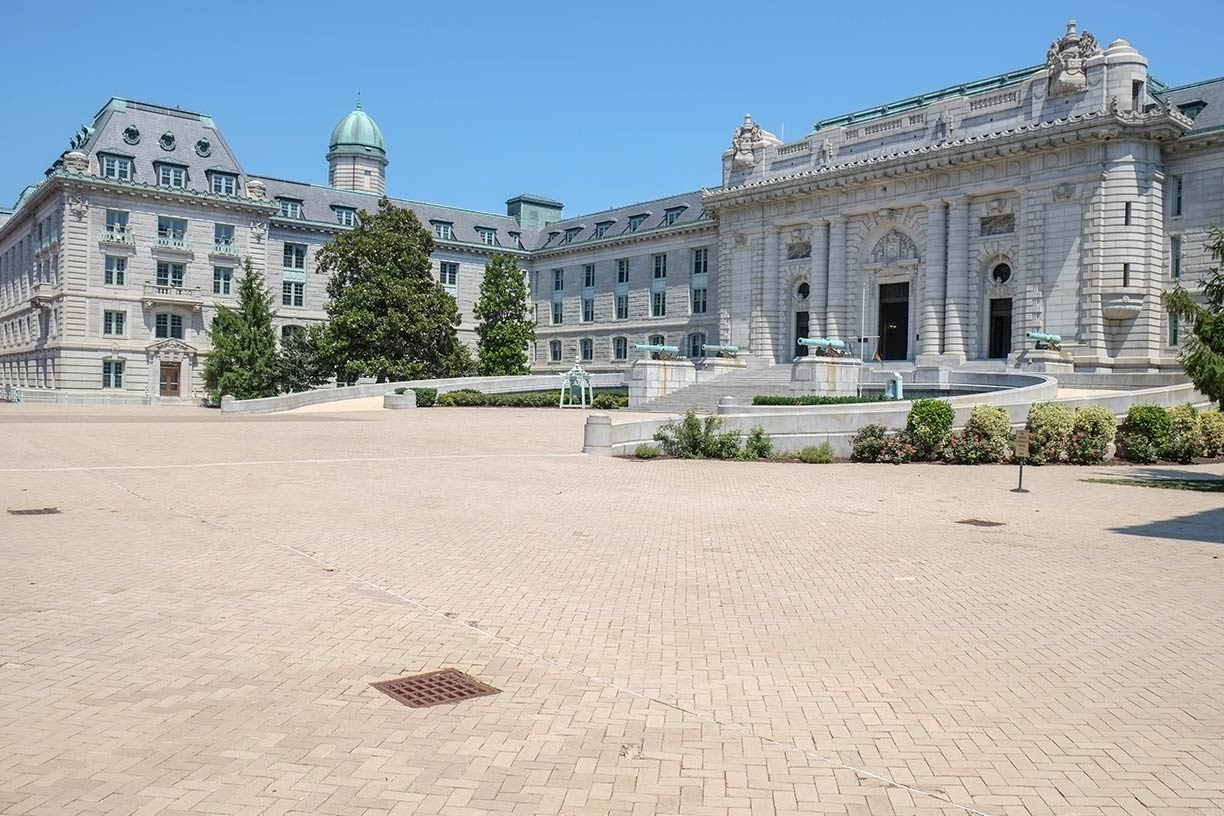 Memorial Hall (part of Bancroft Hall) at the US Naval Academy in Annapolis.
Photo: Paul Sableman


Annapolis City Dock plays host to a handful of Annapolis’ most prominent events.

National Cryptologic Museum (www.nsa.gov/about/cryptologic-heritage/museum/), the museum is situated about 22 mi (35 km) north-west of Annapolis at Annapolis Junction. The museum shows (almost) everything you want to know about cryptology, code making, and code breaking.

Parks/Outdoors:
Jonas Green State Park is a park and a public recreation area on the Severn River and starting point of the Baltimore and Annapolis Trail, a trail on a former rail line through the suburban region between Annapolis and Baltimore.

More about Maryland and the US

Other major cities in Maryland: