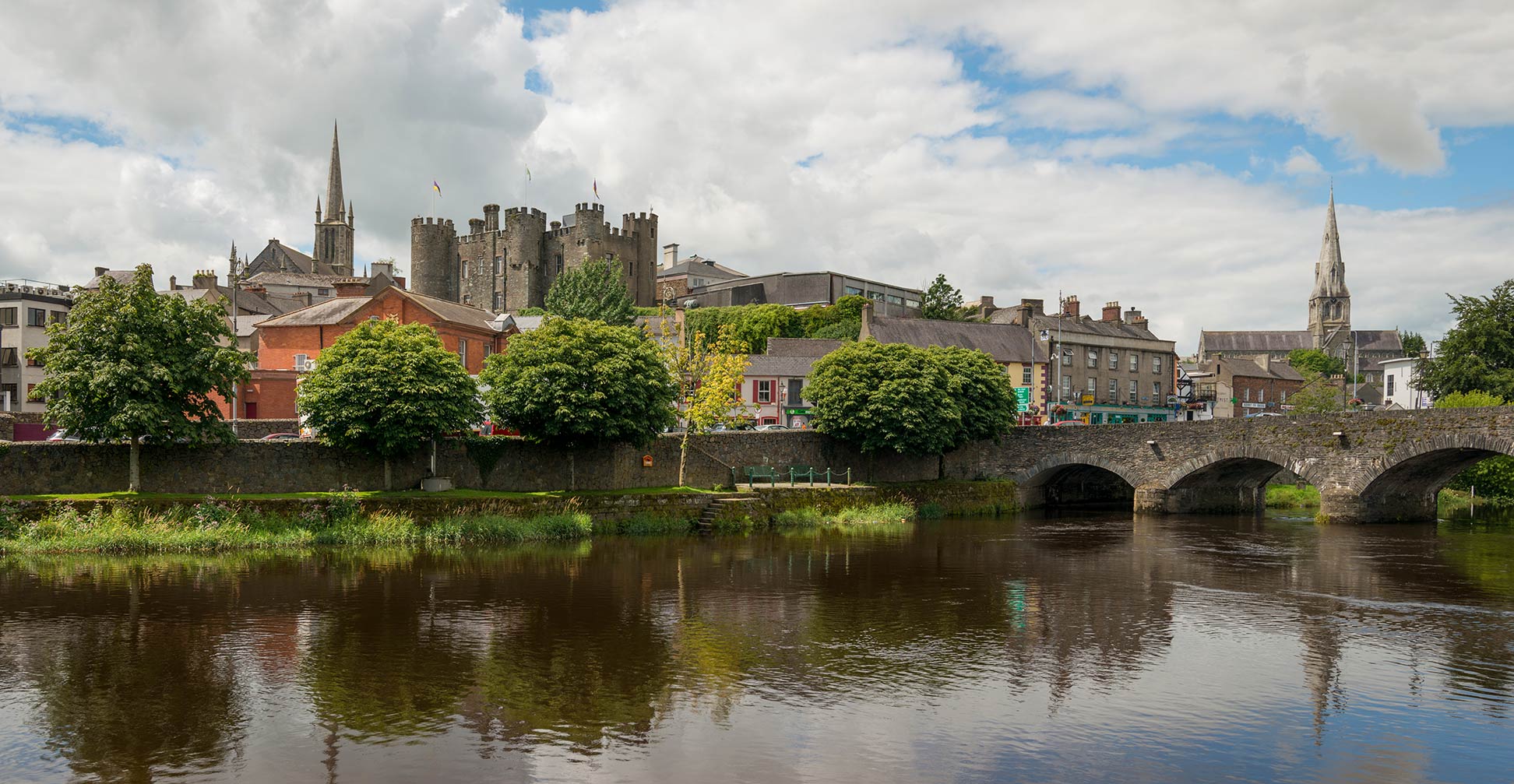 View of the city of Enniscorthy in County Wexford, as seen from Shannon Quay with Enniscorthy Castle in the center, Saint Aidan's Cathedral to the right and St. Mary's Church on the left.
Image: DXR 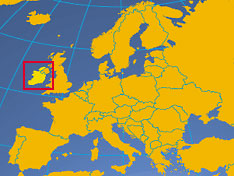 Destination Ireland, a Nations Online Project country profile of the Republic of Ireland, the sovereign state on the island of Ireland. The second-largest island of the British Isles lies west of Great Britain.

About four-fifths of the area of Ireland is the national territory of the Republic of Ireland, the remaining one-fifth in the northeast of the island belongs to Northern Ireland, which is part of the United Kingdom (old story).

With an area of 70,273 km², the Republic of Ireland is somewhat larger than twice the size of Denmark, or slightly larger than the US state of West Virginia.

The Republic of Ireland has a population of almost 5 million people (in 2020), the capital and largest city is Dublin. Spoken languages are Irish (official) and English.


What is Ireland famous for?

The Irish (Celtic) harp and the Irish Shamrock are national symbols.

Irish mythology and folklore (béaloideas), the Leprechaun, and the nation's Celtic heritage.

Republic of Ireland | Poblacht na hÉireann
Background:
A failed 1916 Easter Monday Rebellion touched off several years of guerrilla warfare that in 1921 resulted in independence from the UK for the 26 southern counties; the six northern counties (Ulster) remained part of Great Britain.

In 1948 Ireland withdrew from the British Commonwealth; it joined the European Community in 1973. Irish governments have sought the peaceful unification of Ireland and have cooperated with Britain against terrorist groups. A peace settlement for Northern Ireland, approved in 1998, was implemented the following year.
(Source: CIA - The World Factbook)

Climate: Ireland's temperate is maritime with mild winters and cool summers; it is consistently humid and overcast about half the time.

The Leinster House (Irish: Teach Laighean) in Dublin is the seat of the Oireachtas, the Irish parliament.
Image: Jean Housen


Irish Government
Ireland is a constitutional republic with a parliamentary system of government. The Oireachtas is the national parliament consisting of the Irish president and the two chambers of the Oireachtas, the Seanad Éireann (Senate) and the Dáil Éireann (House of Representatives). Chief of state is the president; head of government is the Taoiseach (Prime Minister). The cabinet is nominated by the prime minister, who is appointed by the president. The president has mainly ceremonial powers.


Official websites of the Government of Ireland

Áras an Uachtaráin
The official website of the President of Ireland.

Department of the Taoiseach
Official site of Ireland's Primeminister.

Tithe an Oireachtais
Houses of the Oireachtas, the Parliament of Ireland. 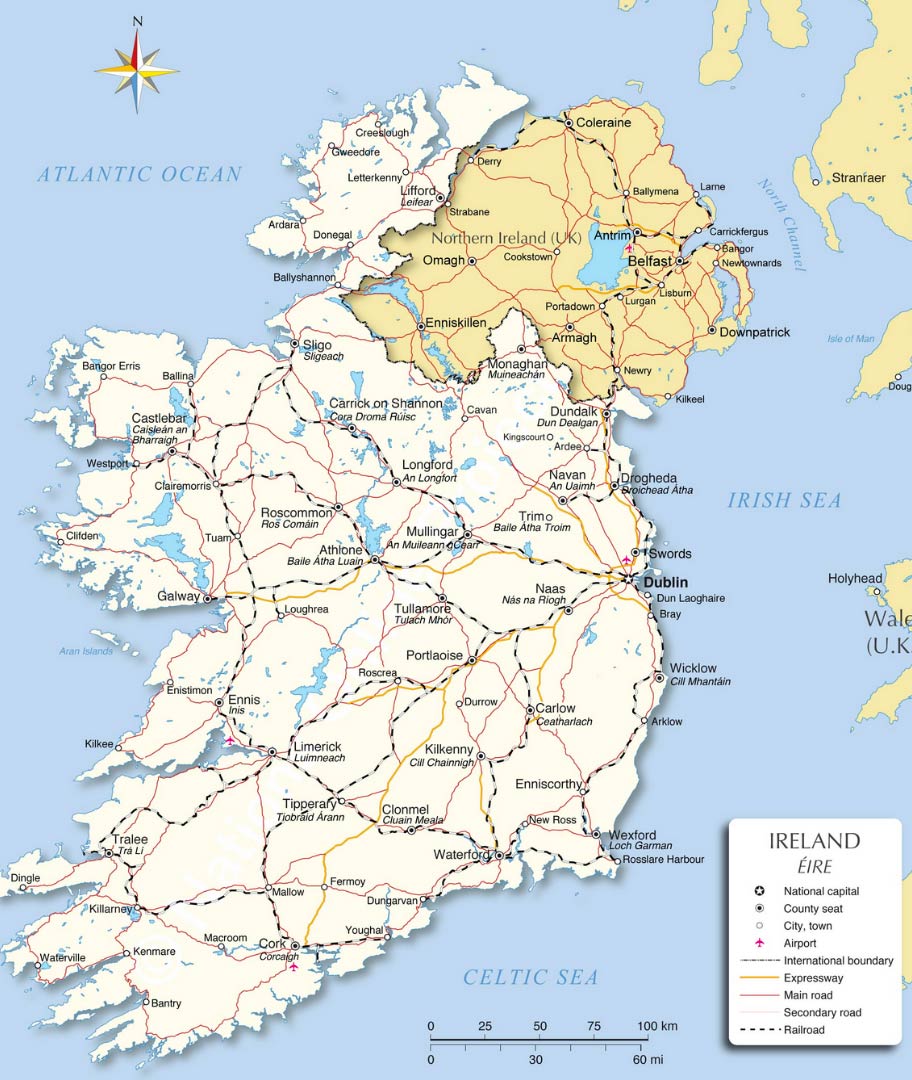 Media outlets operate freely, although Reporters Without Borders has raised concerns about the impact of highly-concentrated media ownership. [1]

Irish Times
The Irish Times is an Irish national daily newspaper with the largest number of foreign correspondents. The paper is based in Dublin.

The Irish News
The daily newspaper is based in Belfast.

TheJournal.ie
Internet publication of Irish and international news and opinion. 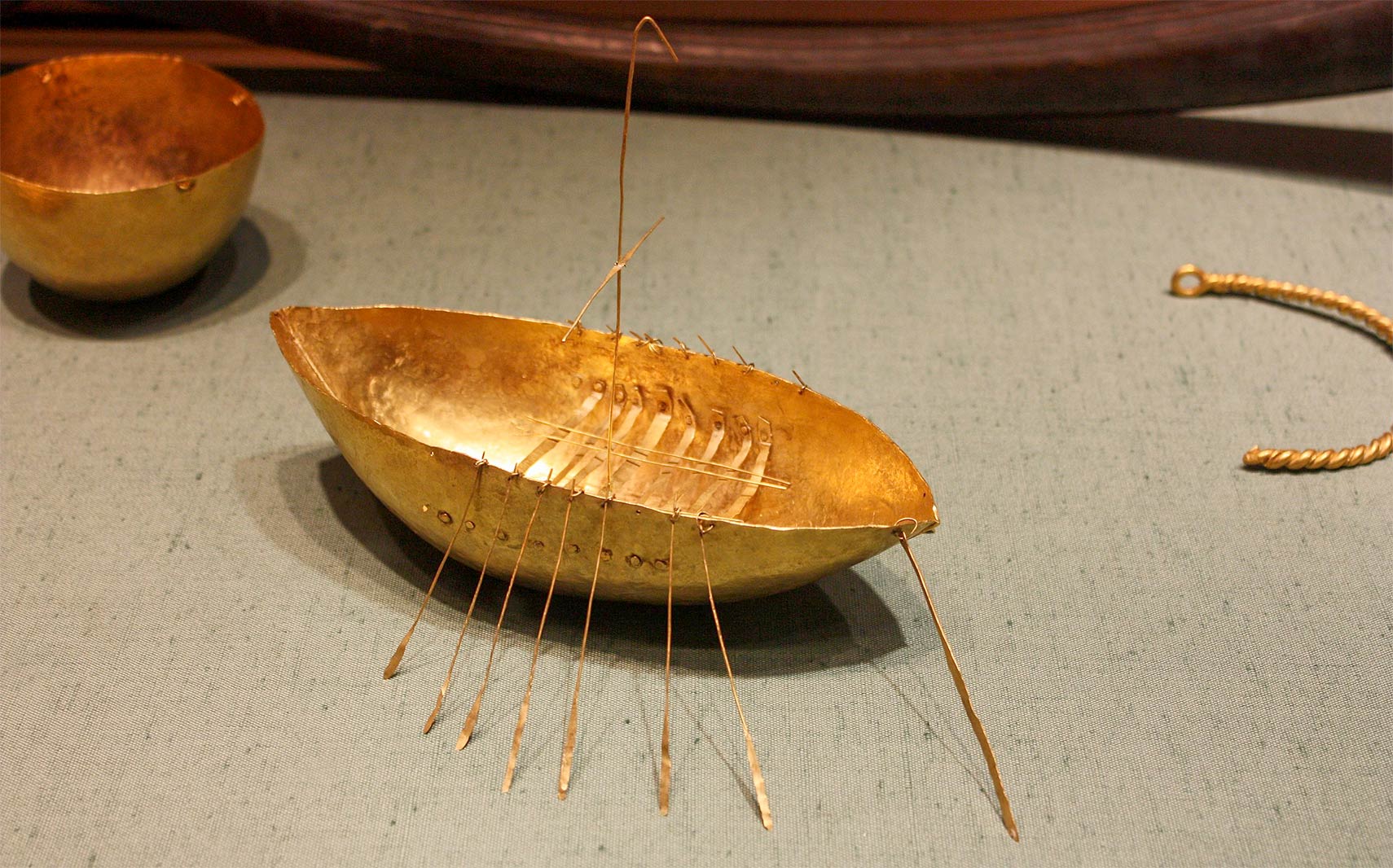 Broighter Gold in the National Museum of Ireland in Dublin. The Broighter Gold is a hoard of gold artifacts from the Iron Age of the 1st century BC and is described as the "finest example of Irish La Tène goldworking."
Image: Ardfern

Dublin City Gallery - The Hugh Lane
The Hugh Lane Gallery is one of the world's first public galleries for modern art, founded in 1908. The museum hosts exhibitions of European and Irish contemporary artists.

Glasnevin Cemetery
Enjoy the morbid fascination of a cemetery with a history. Glasnevin Cemetery features a museum and historically significant monuments and the graves of some of the country's most prominent national figures.

Irish Museum of Modern Art
IMMA in Dublin is Ireland's leading national institution for the collection and presentation of modern and contemporary art.

Irish National Famine Museum
The Famine Museum in Roscommon contains records from the time of Ireland's Great Famine of 1845–1852. 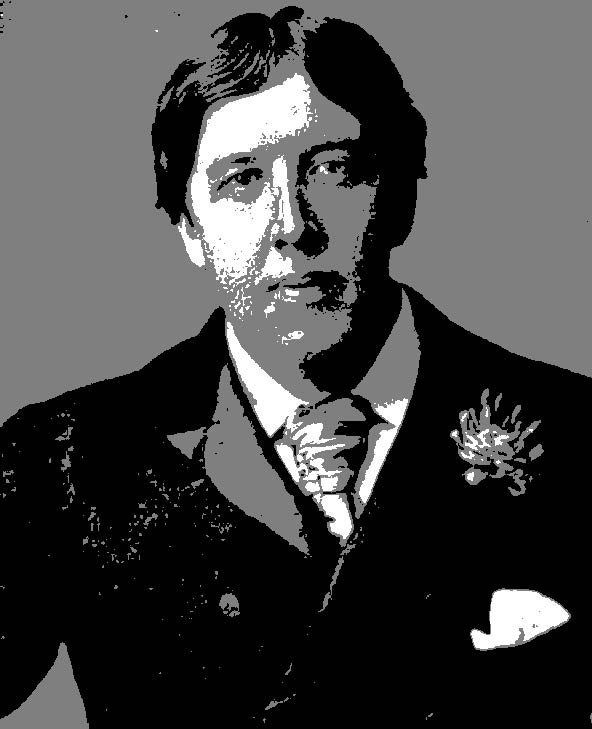 
Dublin-National Library Of Ireland
The world's most extensive collection of Irish documentary material.

Irish Writers Centre
National organization for the promotion of writers and writing in Ireland.

The Oscar Wilde Society
The literary society is devoted to the congenial appreciation of Oscar Wilde.

Music
U2
Official website of the Irish rock band from Dublin.


Economy of Ireland
The economy of Ireland is based on high-tech services, life sciences, financial services, and agribusiness.
Major sectors of the country's economy are aircraft leasing, the alcoholic beverage industry, engineering, and energy generation (natural gas), the pharmaceutical industry, agriculture, and tourism.

Exports:
Ireland's economy is heavily dependent on exports, with the USA and the United Kingdom being important trading partners.
In 2018, Ireland exported $32.9B in blood, antisera, vaccines, toxins and cultures, making it the largest exporter of blood, antisera, vaccines, toxins and cultures in the world. [2]
Irish beef and dairy products are also essential agricultural export products.


Central Bank of Ireland
Ireland's central bank with its headquarters in Dublin.

Dublin Chamber of Commerce
Dublin Chamber is the largest and most influential B2B networking and lobbying organization in Dublin.

Rail
Iarnród Éireann
Irish Rail is the operator of the national railway network in Ireland.

Ports
Ireland's major ports are in Cork (Port of Cork), Rosslare (Rosslare Europort), Waterford (Port of Waterford), and Dublin. Dublin Port is by far the busiest harbor on the island of Ireland. 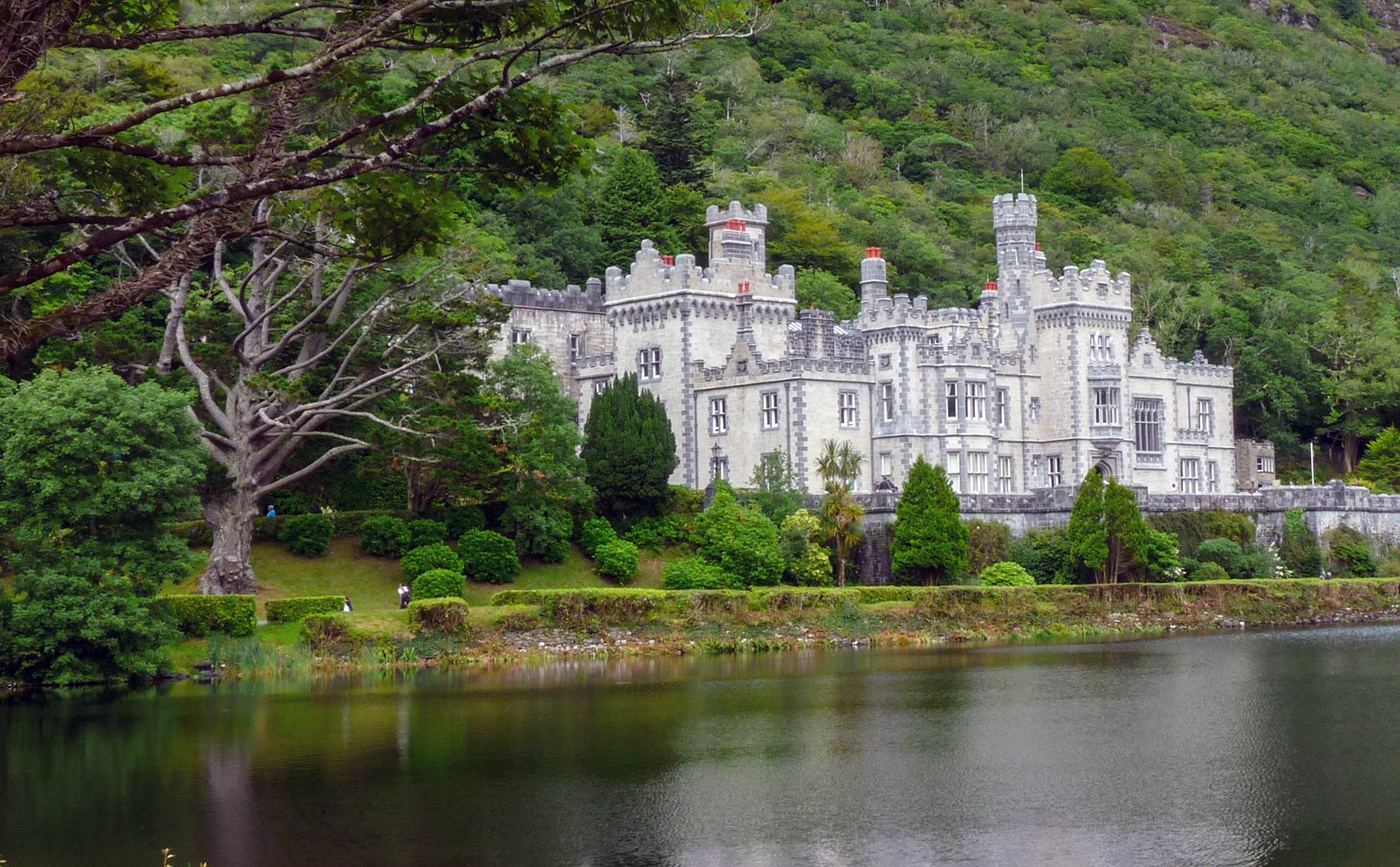 
Bord Fáilte - Welcome to Ireland
Official Website of the Irish Tourist Board with comprehensive travel and tourism information.

Tourism Ireland
From the Causeway Coast and the Wild Atlantic Way to the Sunny South East and the 11 cities in between. Tourism Ireland is responsible for marketing the island of Ireland overseas as a holiday destination.


Cities
Pure Cork
Official tourism website for Cork, the second-largest city in Ireland, located in the south-west of the island.

Galway Tourism
Information for visitors to Galway, the port city on Galway Bay on the west coast of Ireland.

This is Limerick
Limerick's city portal with visitor information. 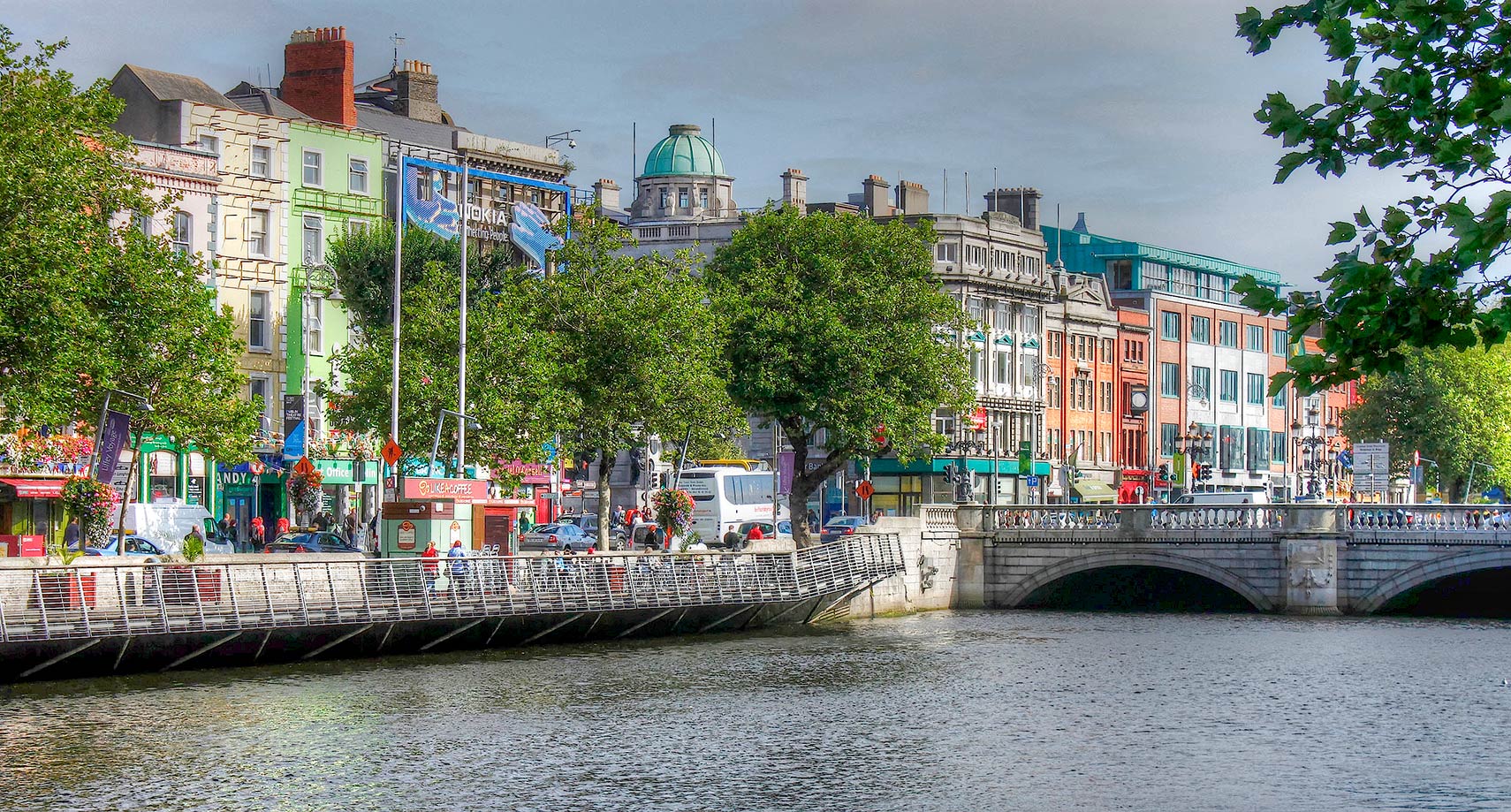 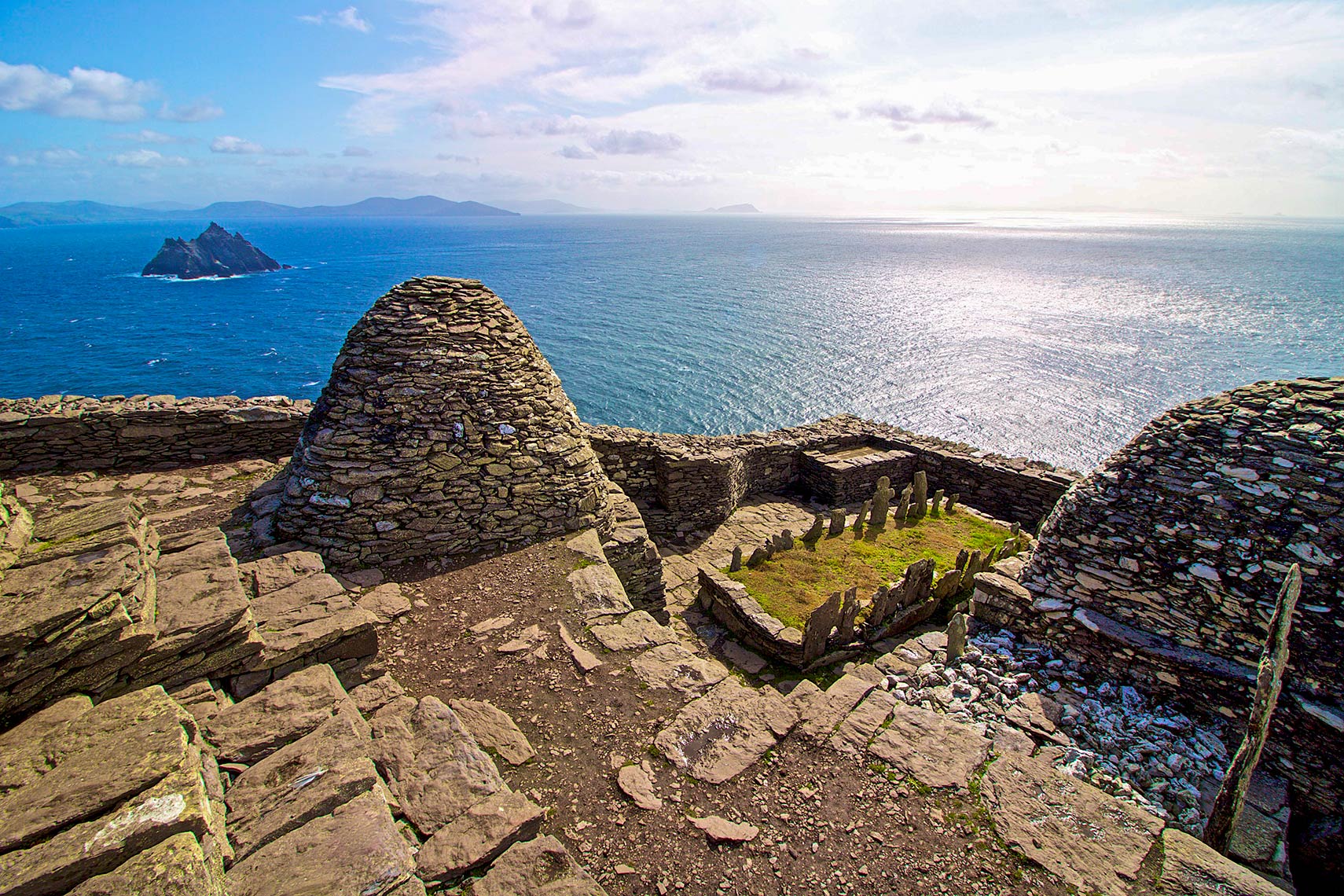 Ireland is home to two UNESCO World Heritage Sites, both cultural; additionally, there are seven sites on the tentative list (see UNESCO's list for Ireland).

Archaeological Ensemble of the Bend of the Boyne (Brú na Bóinne Complex)
Brú na Bóinne is Europe's largest and most important concentration of prehistoric megalithic art. The complex shows the longevity of habitation whose origins can be found in Neolithic settlements. The various monuments, particularly the great passage tomb, represent important cultural, social, artistic, and scientific developments over a considerable length of time.

Skellig Michael
This monastic complex from the 7th century is perched on the steep sides of the rocky island of Skellig Michael. It illustrates the very spartan existence of the first Irish Christians. Since the extreme remoteness of the island has until recently discouraged visitors, the site is exceptionally well preserved. 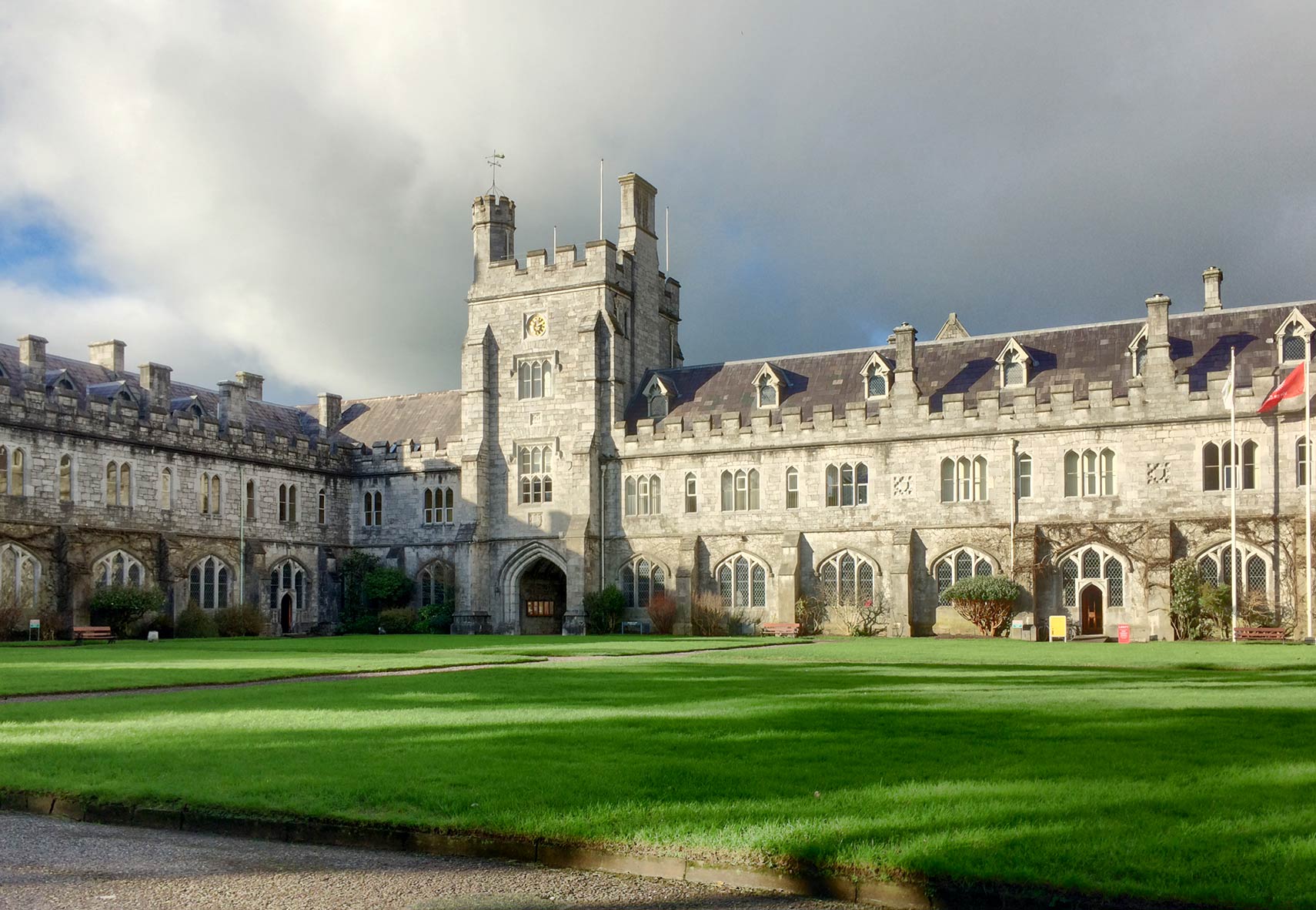 National College of Art and Design
NCAD in Dublin offers the largest range of art and design degrees in Ireland. 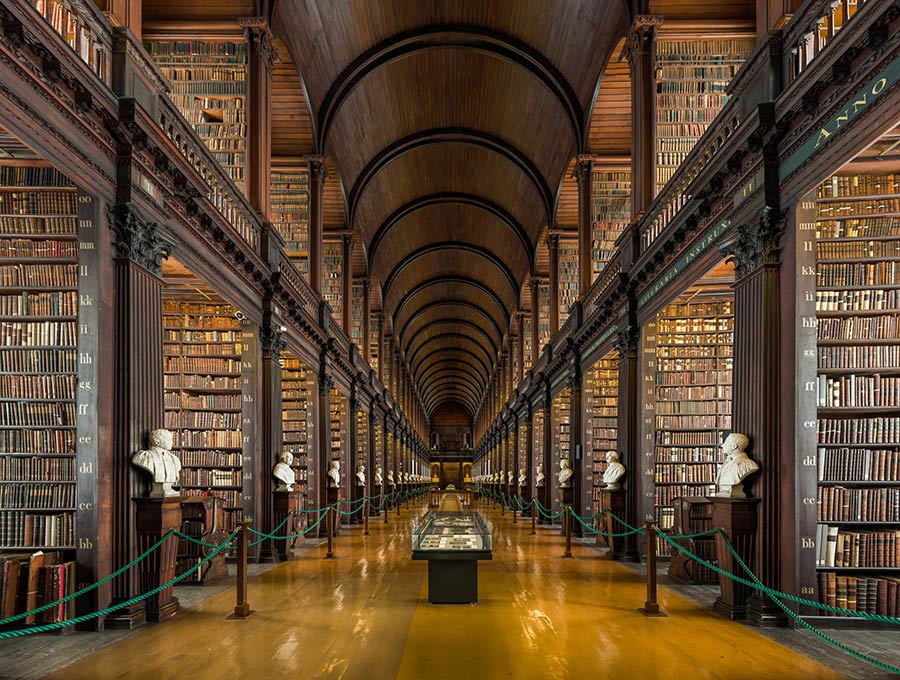 Trinity College Dublin - The Long Room of the Old Library. The Long Room, which is almost 65 m long, is filled with 200,000 of the library's oldest books.
Image: Diliff 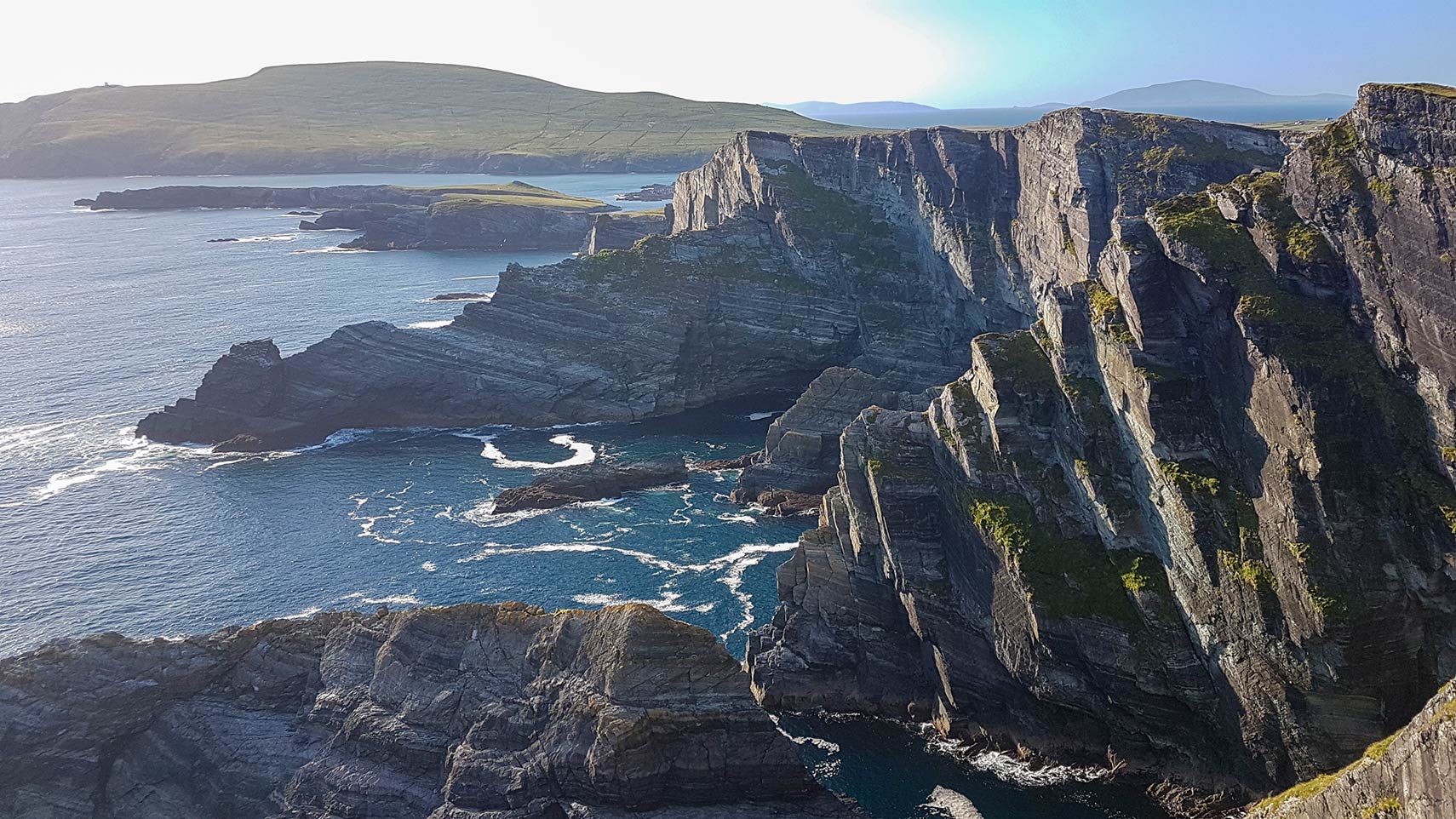 
National Parks
National Parks & Wildlife Service - NPWS
This site describes the functions of NPWS, and you will find information about all six National Parks in Ireland.
Burren Life Programme
Farming for Conservation on the Burren (place of stone).
Coole-Garryland Nature Reserve
Tourist information for Coole Park, now a nature reserve close to Galway.
Heritage Ireland
The Office of Public Works will introduce you to many national monuments, historic houses, parks and gardens, some of the many and varied attractions of Ireland's rich heritage.
Wicklow Mountains National Park
Official website with in-depth information on the wildlife and landscape of Wicklow Mountains National Park.

Hiking path at Wicklow Gap, the Wicklow Gap in County Wicklow is one of the highest Irish mountain passes.
Image: ©  Superbass 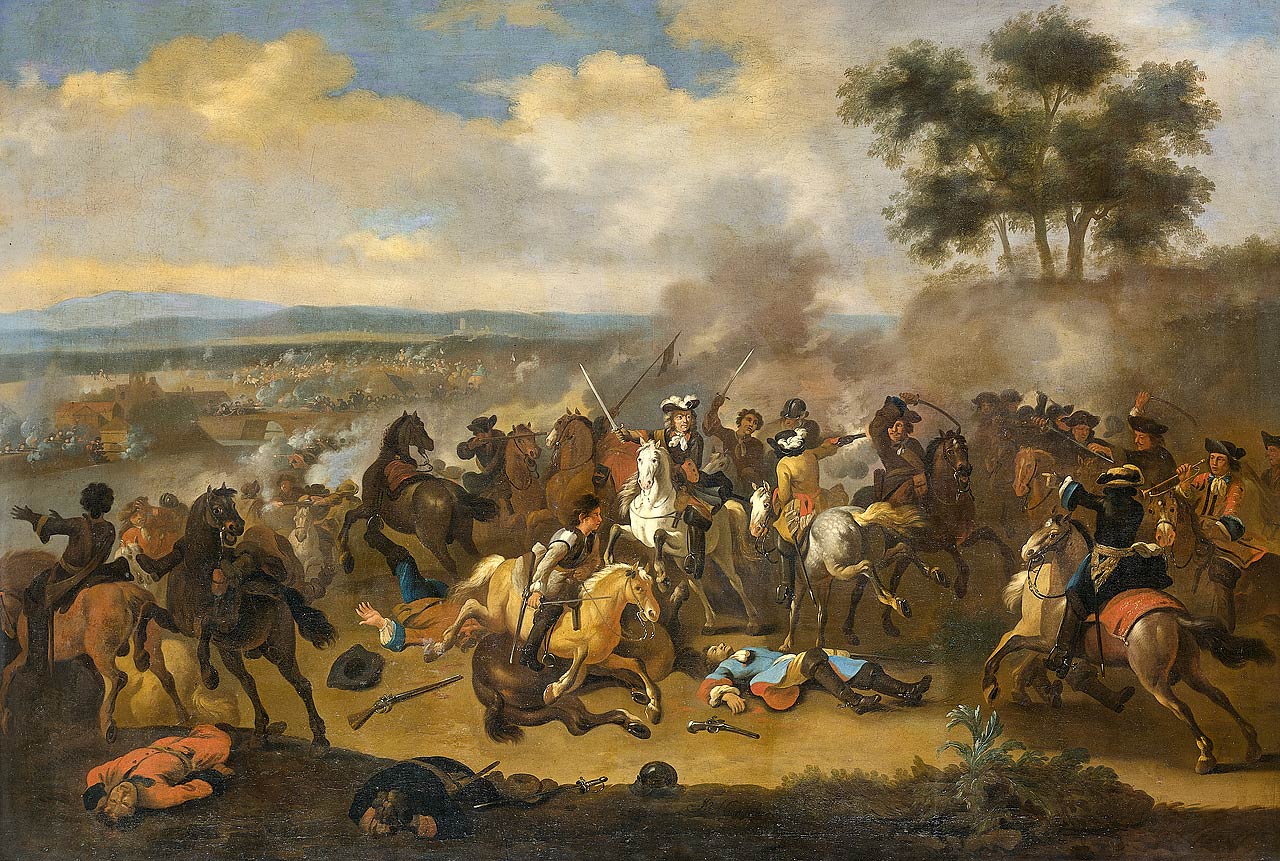 The Battle of the Boyne in 1690 between the forces of the deposed King James II of England and Ireland, versus those of King William III of England.
Painting: Jan van Huchtenburg (1647–1733)

History of Ireland: Primary Documents
Link collection of the Harold B. Lee Library with links to primary documents and online resources on Irish history.

Great Famine (Ireland)
Wikipedia article about the Great Hunger, a period of mass starvation and disease in Ireland from 1845 to 1849.

The Troubles
Wikipedia article about the ethno-nationalist conflict in Northern Ireland during the late 20th century.

Saint Patrick
Wikipedia entry about the most generally recognized patron saint of Ireland.

The Story of the Irish race
Irish history.

A Timeline of Irish History
Irish Timeline and History.

Celts
Wikipedia article about the Indo-European peoples and Celtic culture. 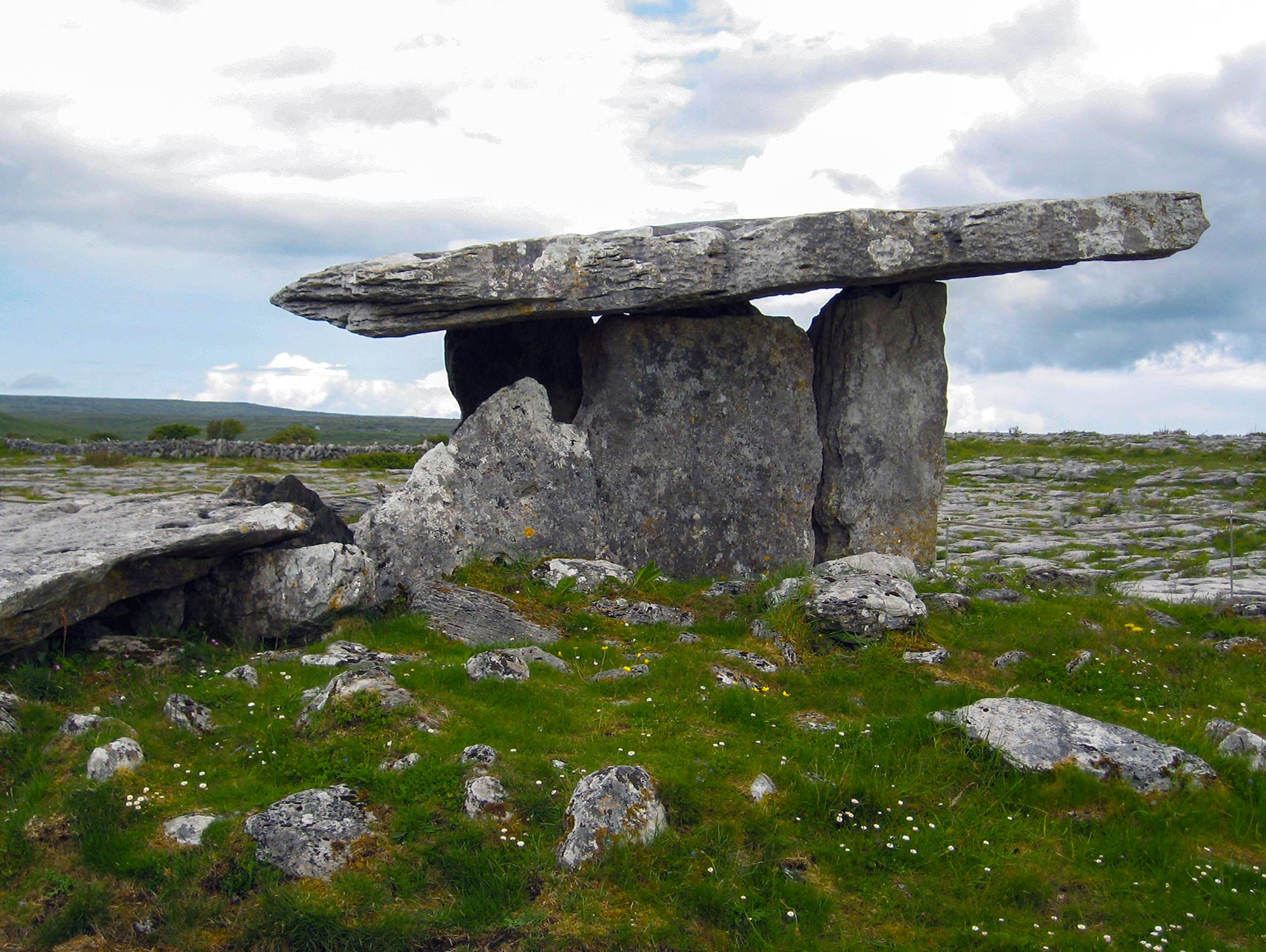 The Poulnabrone Dolmen, a megalithic passage tomb in the Burren.
Image: HEireann