A herd of elephants at sunset in Amboseli National Park in the Rift Valley Province of Kenya.
Image: © Diana Robinson 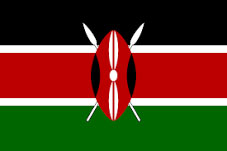 The map shows Kenya, a country in East Africa, bordering the Indian Ocean in the southeast; neighboring countries are Ethiopia, Somalia, South Sudan, Tanzania, and Uganda.
Kenya became an independent state within the Commonwealth of Nations in 1963.

With an area of 580,000 km², the country is somewhat larger than Metropolitan France or slightly more than twice the size of the U.S. state Nevada.

Kenya has a population of 55 million people (in 2021). The capital, largest and most populous city is Nairobi. The second-largest city and the country's chief port is Mombasa.

The country is largely populated by Bantu-speaking peoples. Spoken languages are Swahili and English (both official), and numerous indigenous languages, mainly Kikuyu and Luhya. The main religion is Christianity (83%). 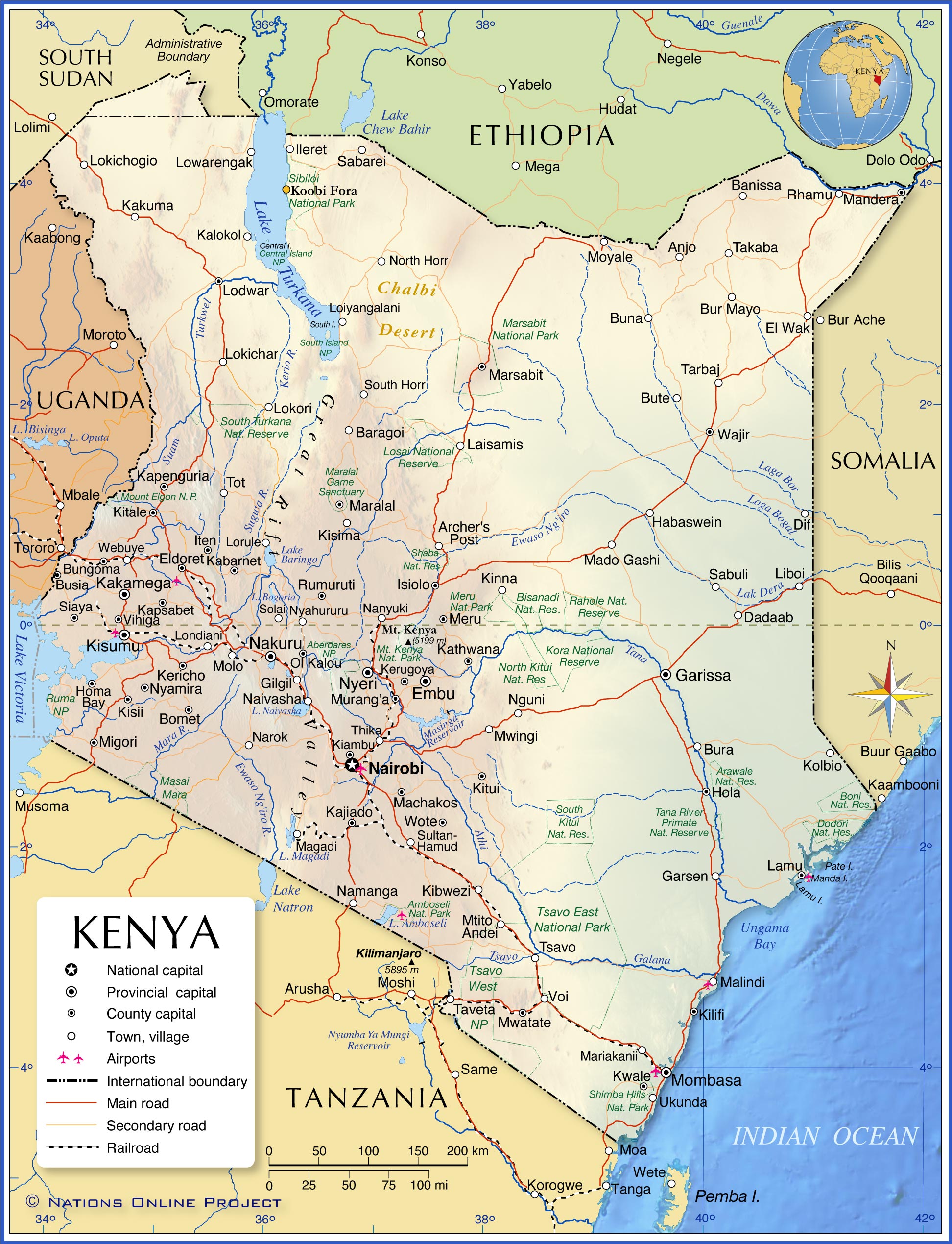 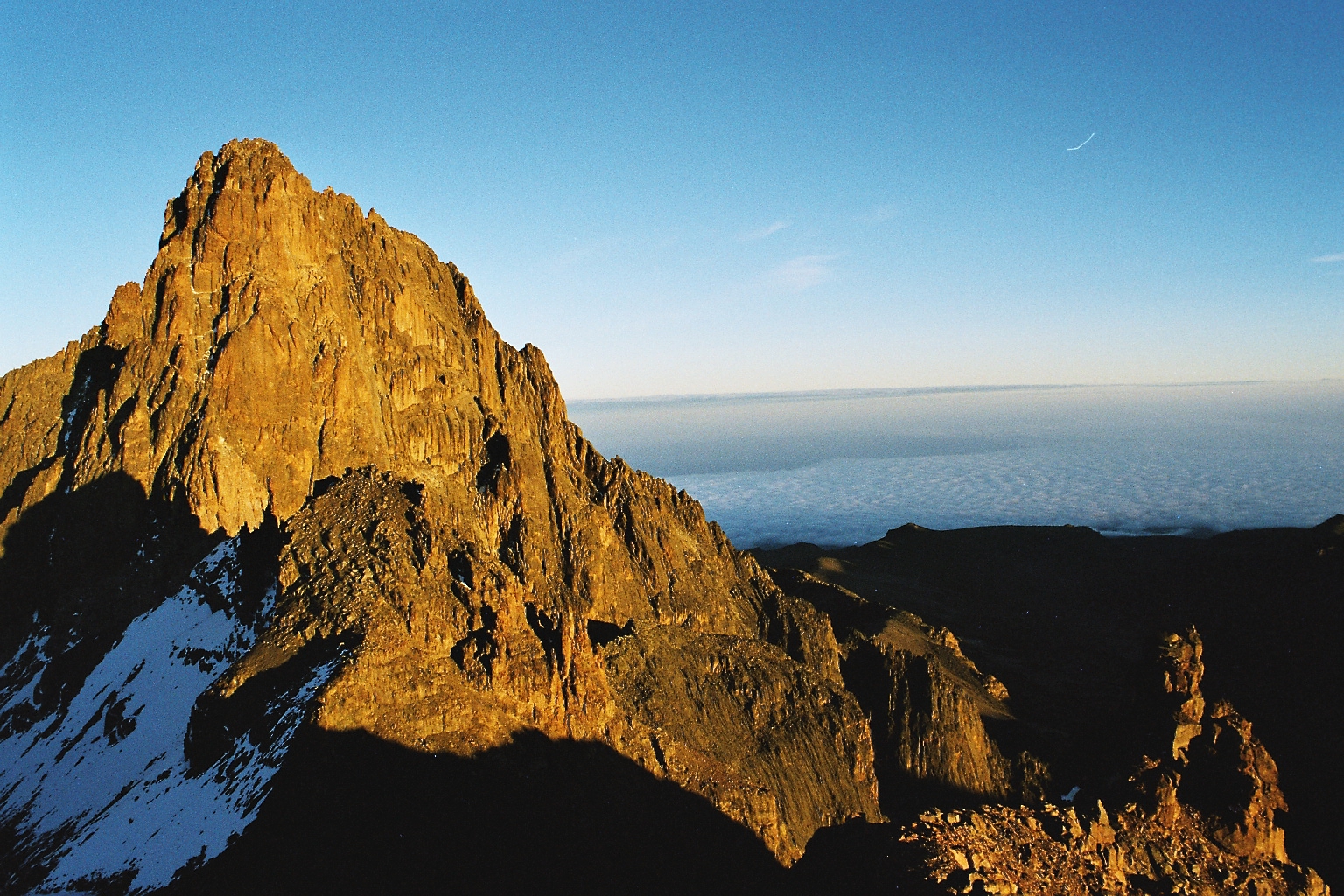 
The ultimate geographic highlights of the country are the Great Rift Valley, the eastern branch of the East African Rift, a ridge system that runs through Kenya from north to south.

Lake Victoria,
Lake Victoria, the largest lake in Africa, is located on the territory of Uganda, Tanzania and Kenya, with Kenya's share being the smallest.

Mount Kenya, a dormant stratovolcano in the Kenyan highlands, is the country's highest mountain and namesake for the nation. The mountain's highest peaks are Batian (5,199 m), Nelion (5,188 m) and Point Lenana (4,985 m).

Lake Turkana, a huge salt lake with no outlet in an arid region of Kenya's branch of the Great Rift Valley.

Another attraction Kenya is the Maasai Mara, a national game reserve with every African animal imaginable, including lions, antelopes, hyenas, buffalos, crocodiles, cheetahs, elephants, zebras and hippos. The region is famous for the annual migration of wildebeest. The wildebeest migrate in a loop through Tanzania and Kenya, following the burgeoning of nature after the seasonal rains.

Amboseli National Park is popular with tourists and animals, known for large herds of elephants against the picturesque backdrop of snowcapped Mount Kilimanjaro (which is in Tanzania).


Landscape
Kenya's landscape varies from low plains near its coast at the Indian Ocean to a fertile plateau in the west. The country's interior is dominated by the central highlands, with the country's highest point Mount Kenya at 5,199 m. 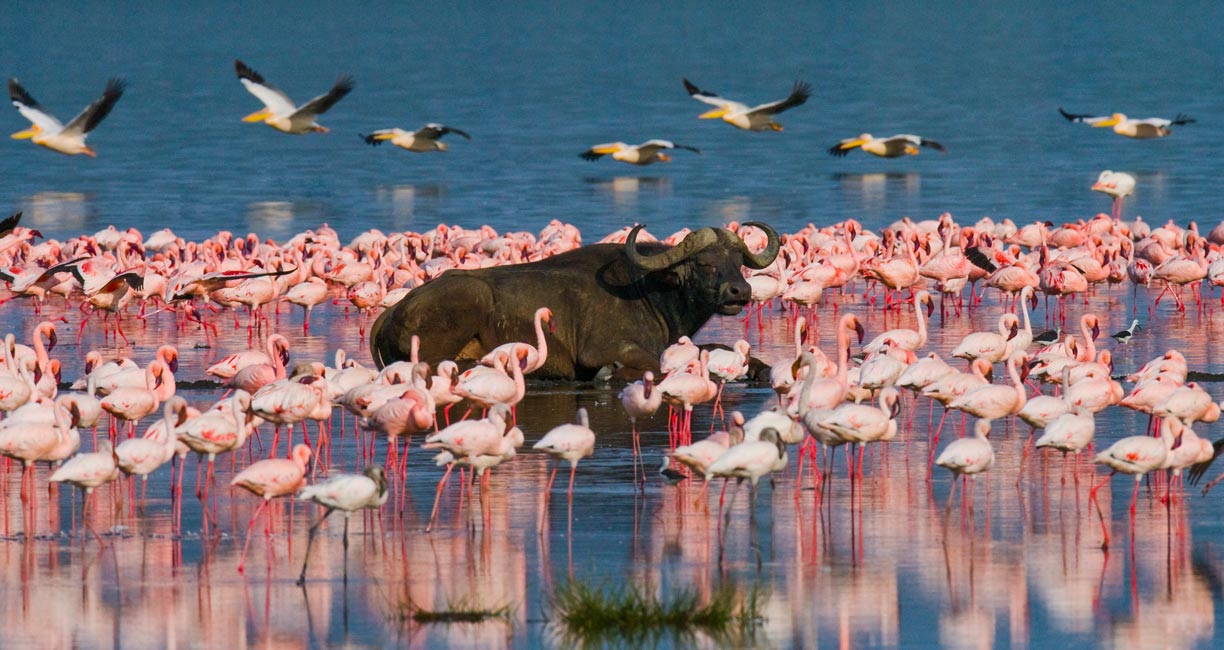 An African buffalo in a flock of flamingos in Lake Bogoria National Reserve, Pelicans taking off in the background.
Image: gudkovandrey - Adobe Stock

The highlands are bisected by the Great Rift Valley, a large natural depression that runs through Kenya with a north to south orientation. Within the Valley is a chain of volcanoes; some of them are still active.


Rivers
The longest rivers in the country are the Tana River, the Athi-Galana River and the Kerio, a seasonal river that empties into Lake Turkana. The approximately 1,000 km long Tana River is the country's longest river and gives its name to the Tana River County. The Tana rises in the Aberdare Range and flows into the Indian Ocean at Formosa Bay. Famous Mara River has its sources in the Kenyan highlands and empties into Lake Viktoria.

Rainforest
There is little rainforest in Kenya, except for the Kakamega Forest, a tropical rainforest near the border with Uganda in Kakamega and Nandi counties. 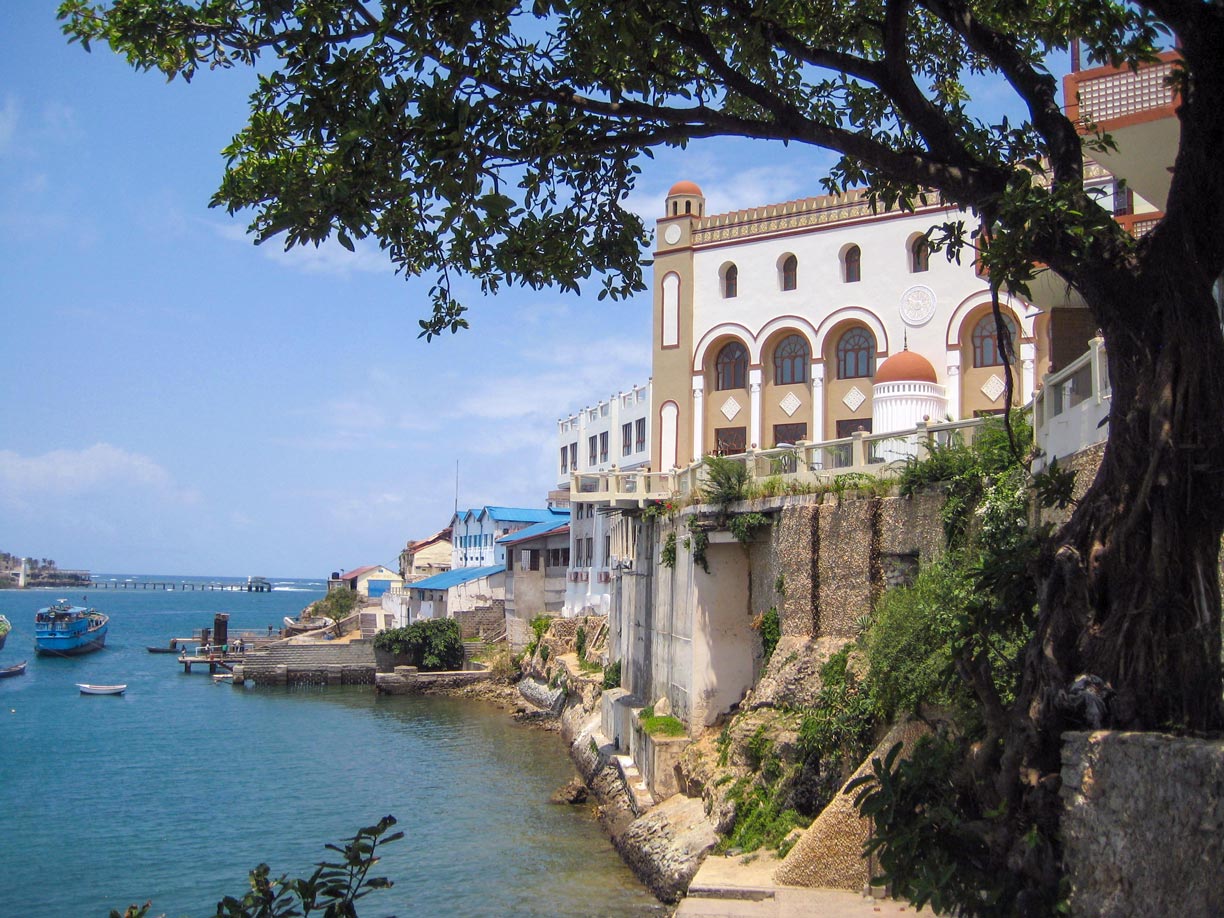 Beachfront of the Old Town of Mombasa at Mombasa Harbour near the Portuguese built Fort Jesus. Mombasa is the most important port and the second largest city in Kenya.
Image: rguha

Climate
Kenya's climate varies from tropical along the coast to arid in the interior.


Natural resources of Kenya
Major natural resources found in Kenya include limestone, soda ash, salt, gemstones, fluorspar, zinc, gypsum, diatomite, oil and gas; it has proven deposits of titanium, gold and coal. But despite these commodities often being located in remote regions where the country's poorest live, few have reaped the rewards from mining. [Reuters]
Other natural resources are Kenya's wildlife and hydropower.
The country's major agricultural exports are tea, coffee, cut flowers, and vegetables. Kenya is the world's leading exporter of black tea and cut flowers.


Natural hazards in Kenya
Kenya faces a number of natural hazards, the most common of which are weather-related: Floods, droughts, landslides, lightning/thunderstorms, forest fires, and high winds. Other risks the country faces include HIV/AIDS and conflict. [UNDP]

The map shows the location of the following Cities and Towns in Kenya:

Satellite View and Map of Kenya