Map of the Mediterranean Sea

About the Mediterranean Sea 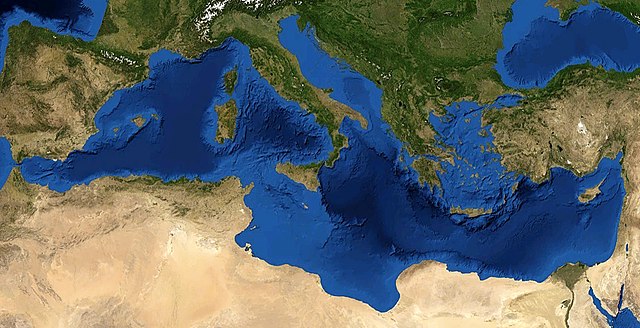 The West Asian (Middle Eastern) countries bordering the Mediterranean Sea are Turkey, Syria, Lebanon, Israel, the Palestine Gaza Strip and the divided island of Cyprus, which consists of the Greek Cypriot-controlled Republic of Cyprus and the disputed Turkish Republic of Northern Cyprus.

The sea stretches from the Strait of Gibraltar in the west to the Lebanese coast in the east over a length of about 3,750 km (2,330 mi), which is roughly equivalent to the distance from Los Angeles to Baltimore.

The Mediterranean Sea offers a staggering 46,000 km (28,600 mi) long coastline and includes 15 marginal seas, such as the Balearic Sea, the Adriatic Sea, the Levantine Sea and the Ionian Sea.

The deepest point in the Mediterranean is known as the Calypso Deep at -5,267 m (-17,280 ft) in the Ionian Sea, west of the Peloponnese peninsula (Greece).

Religion
The Mediterranean region is the birthplace of several religions. From ancient Egyptian gods to pre-Hellenic fertility deities to the main gods of the Greek pantheon, the twelve Olympians, and the gods and goddesses of ancient Roman religion, all originated in this region.
Two of the three Abrahamic monotheistic religions, Christianity and Judaism, originated in the Levant (eastern Mediterranean).

Climate
The region is characterized by the prevailing subtropical climate known as the Mediterranean climate, with usually mild, wet winters and hot, dry summers.


Map of the Mediterranean Sea

View from the island of Vulcano to the other Aeolian Islands, a volcanic archipelago north of Sicily. The Aeolian Islands in the Tyrrhenian Sea, also known as the Lipari Islands, are a group of smaller islands that include Stromboli, an active volcano.
Image: kuhnmi


More about the Mediterranean Sea 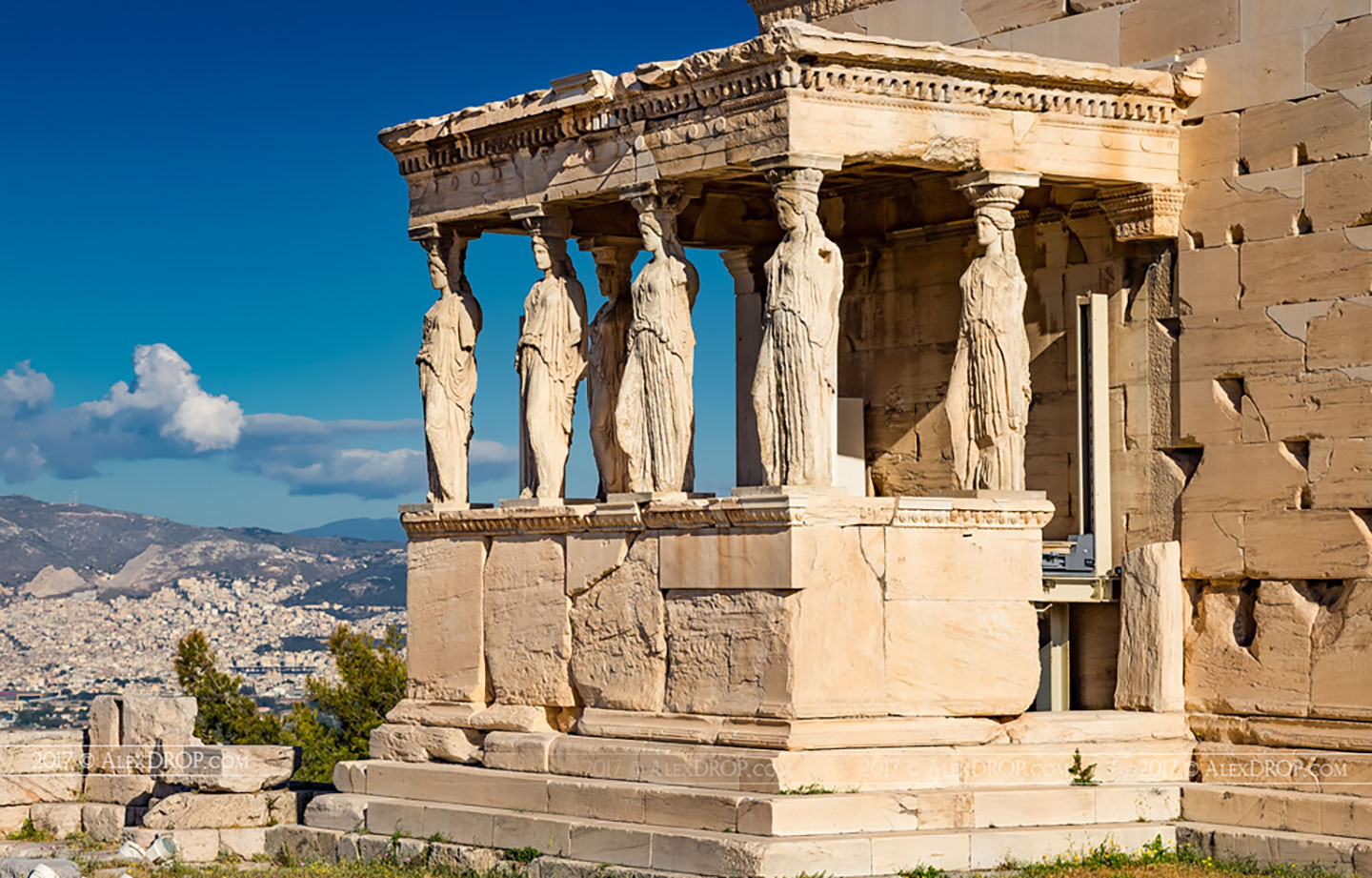 The female columns of the Caryatid porch of the Erechtheion, the temple of Athena Polias, an Ionic-style temple on the Acropolis in Athens, Greece.
Photo: Alex DROP

The Mediterranean region is the historical cradle of the modern civilization of the Occident.

It was the playground for Phoenicians traders who built small colonies along the coast.

In trade, the Mediterranean was the final destination of the ancient Silk Road. The goods delivered from the Far East were distributed throughout the Mediterranean via the trading network of the Phoenicians and Carthaginians. Trade was also associated with cultural exchange, for example, through the use of an alphabet or numbers.

The Mediterranean saw the development of Greek city-states (polis; poleis) and the rise and fall of the Roman Empire, which covered the area of the North African coast and large parts of Western Europe, the Balkans, Persia and much of the Middle East.

It was the birthplace of ancient Greek philosophy and architecture.

The Mediterranean was home to all of the Seven Wonders of the Ancient World, and the first ancient Olympics was held here in 776 B.C.E., staged in Olympia, a sacred site in Greece. Since 1989, the Archaeological Site of Olympia has been a UNESCO World Heritage Site.

After the end of the Dark Ages, Renaissance art and culture emerged in Italy, especially in Florence, but quickly spread to other Italian cities and from there throughout Europe. The humanistic movement opened ways out of the Dark Ages into modern times. At its center were flourishing conurbations, Rome, Florence, Venice, Athens, Constantinople, Jerusalem and Cairo.

The Levant region in the Eastern Mediterranean was the birthplace of two world religions, Christianity and Judaism.

Between 661–750 CE, the southern and eastern regions of the Mediterranean, Hispania (Al-Andalus), North Africa and the Levant were under the rule of the Umayyad Caliphate, which was on a Muslim conquest mission and brought Islam to the region.

In wave-like spurts, Oghuz tribes, other Turkic ethnic groups, and Mongols flooded into Anatolia from the 11th century until the 15th century. By the 15th century, the Turks formed an absolute majority in Anatolia.

The Turkish Ottoman Empire existed from about 1299 to 1922 and, in the 15th century, already extended from the Balkans, over Greece, Anatolia and the Levant to parts of the Arabian Peninsula, Egypt and North Africa. 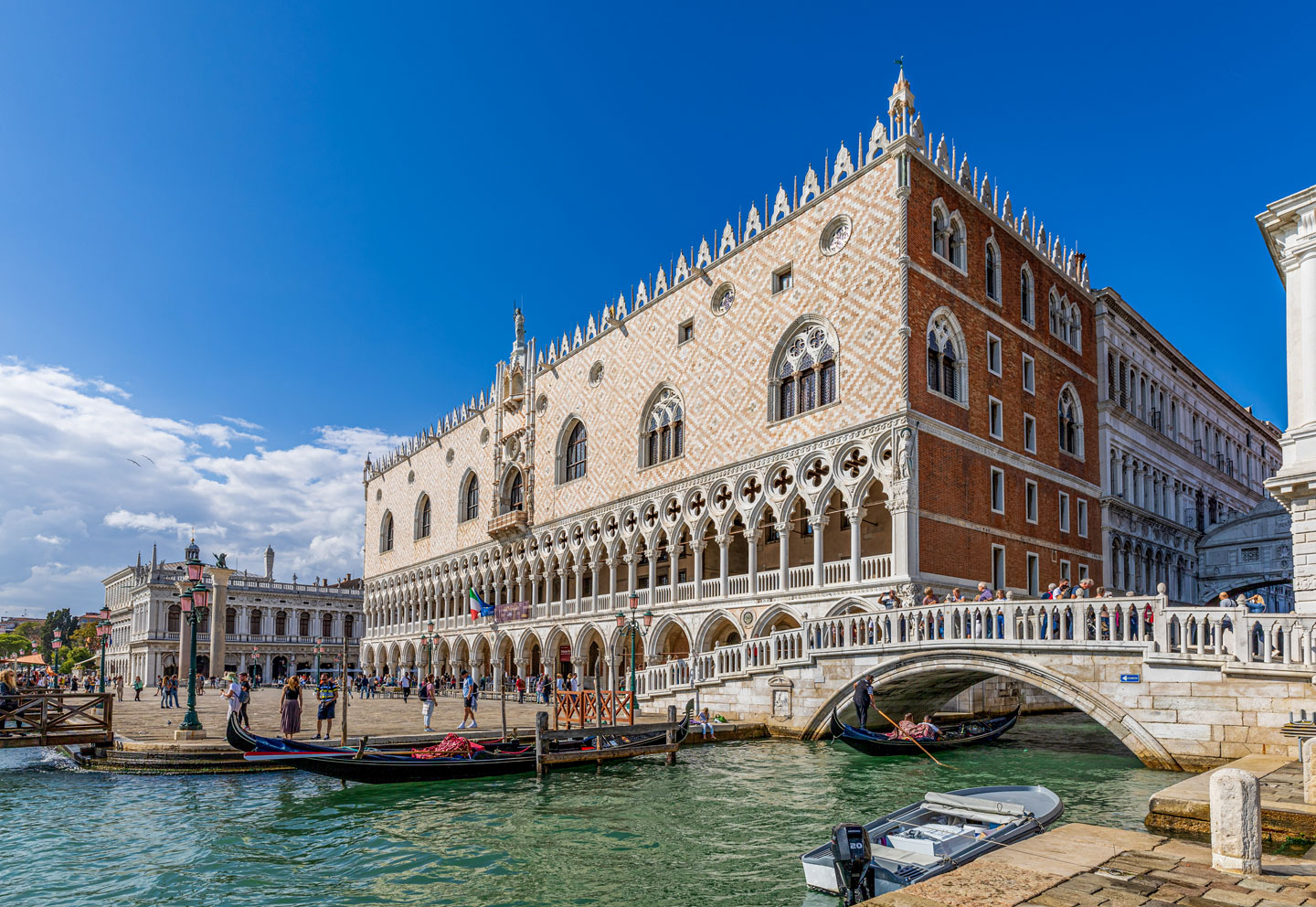 The Doge's Palace with the Ponte della Paglia, the bridge over the Rio del Palazzo canal. The 14th-century palace is one of the most famous landmarks in the city of Venice. The building was, since the 9th century, the seat of the Doge, the acting head of state for life, as well as the governing and judicial bodies of the Republic of Venice. Today, the historic site houses an art museum. The building in the background (left) is the Biblioteca Nazionale Marciana, one of Italy's oldest surviving public libraries and repositories of manuscripts.
Photo: Matthias Süßen

There are two island countries in the Mediterranean Sea, Malta and Cyprus.

Other popular island vacation destinations in the Mediterranean are:

The French island of Corsica, the Tunisian island of Djerba, and Malta, the former island of the Knights Hospitaller.

The most popular vacation islands in Italy are Capri, Elba in the Tuscan Archipelago, Ischia and Procida in the Phlegraean Islands, Sardinia and Sicily.

Popular vacation islands in Greece are Corfu, Crete, Mykonos, Rhodes and Santorini, to name a few.

Aerial view of Barcelona, a major Mediterranean port and the capital of Catalonia on the coast of northeastern Spain.
Image: Mike McBey


Influential Cities on the Mediterranean Sea 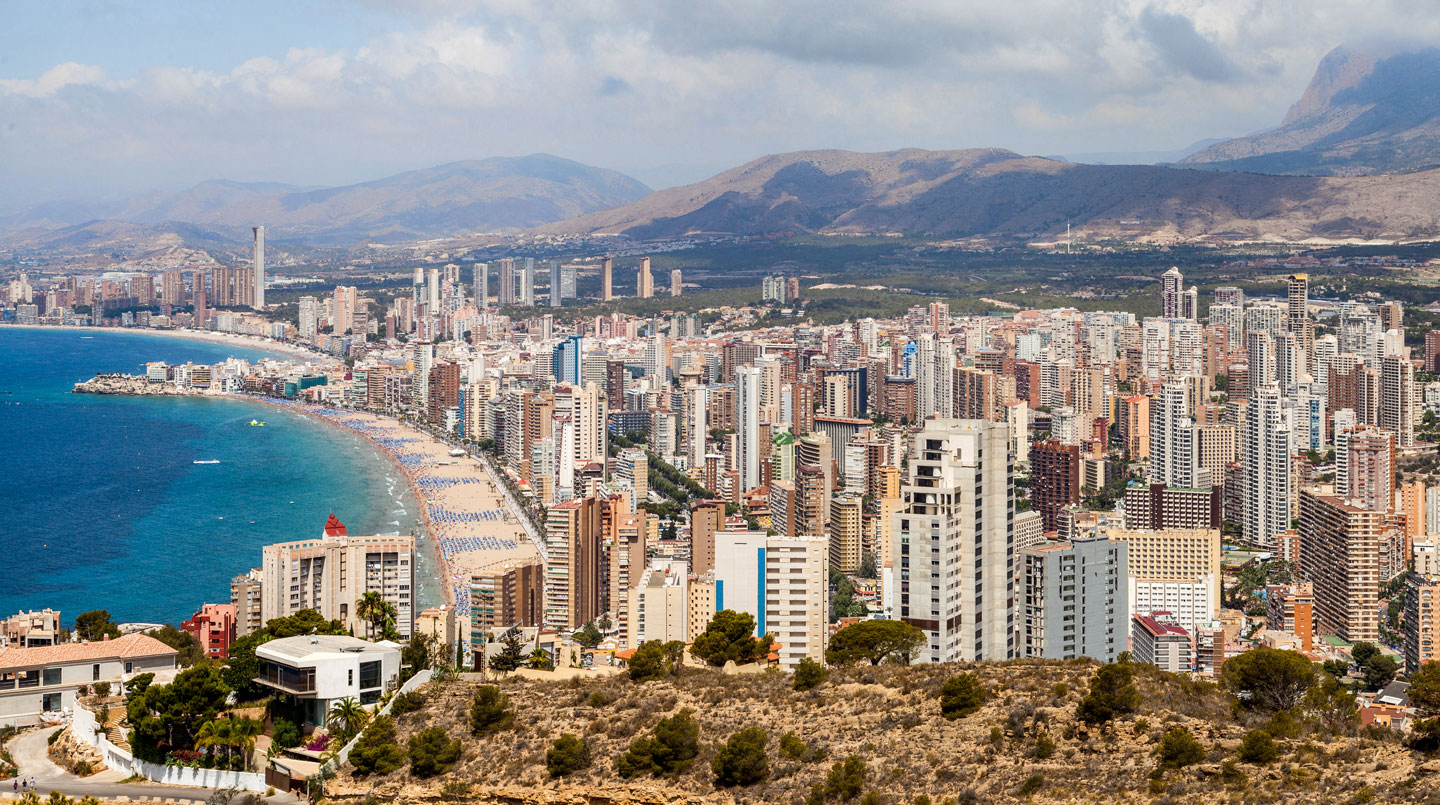 View of Benidorm, a city on the Costa Blanca in Spain. The economic focus of the city is tourism. Until 1967, mainly high-rise buildings with hotels for mass tourism were built in Benidorm; these still characterize the city, which is known as a vacation destination.
Photo: Diego Delso

, some of these places have successor cities, other are long gone. Still, they have shaped for centuries the history of the Mediterranean.

Major Ports in the Mediterranean 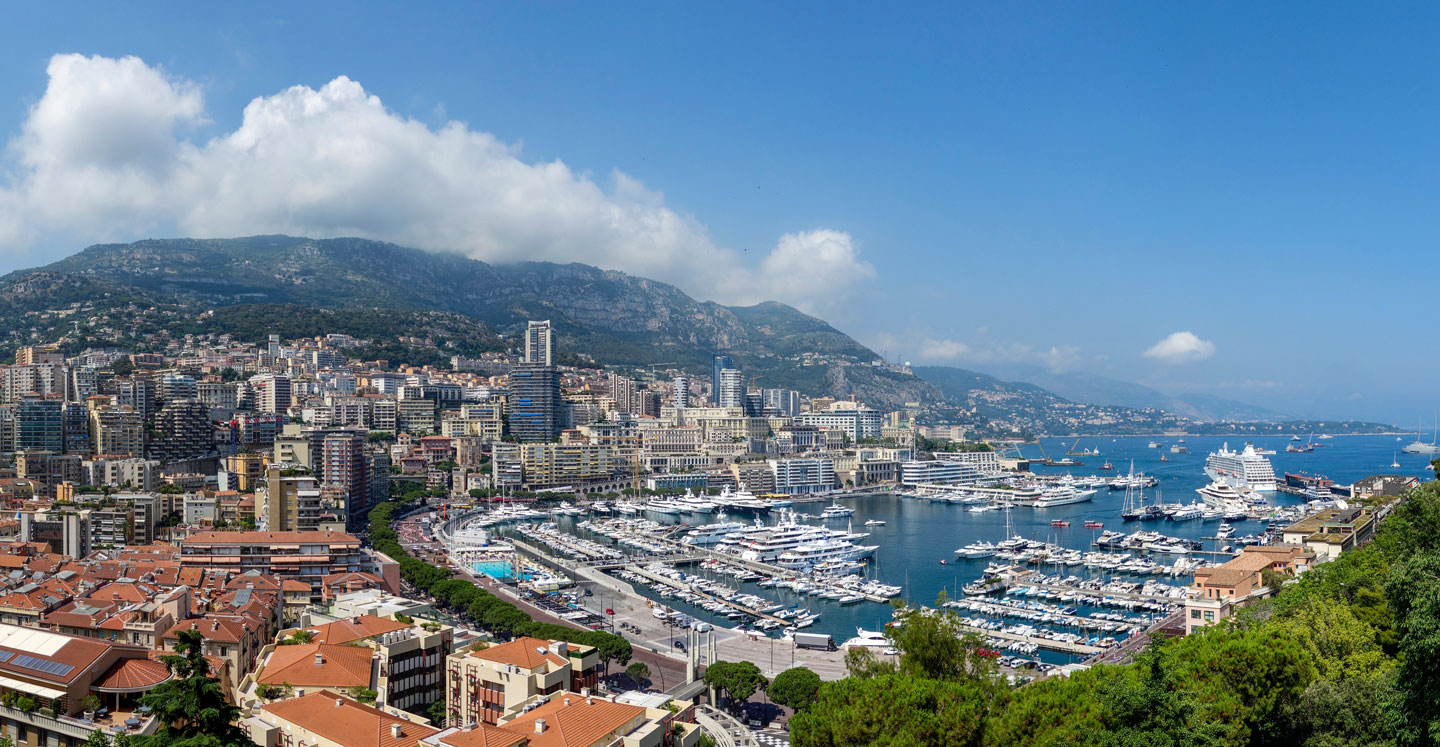 Monaco, the principality that forms an enclave within French, with Port Hercules on the Côte d'Azur, seen from the Place du Palais in Monaco-Ville, a district of the city-state.
Photo: Spike

Today, the Mediterranean Sea is one of the busiest shipping routes in the world, carrying about a third of all commercial traffic each year. [EEA]

The most important ports in the Mediterranean are:

In Greece, the Port of Piraeus, the largest port in Greece and one of the largest passenger ports in Europe is located south of Athens, the Greek capital.


France
The Port of Marseille is France's gateway to Mediterranean trade and transport. 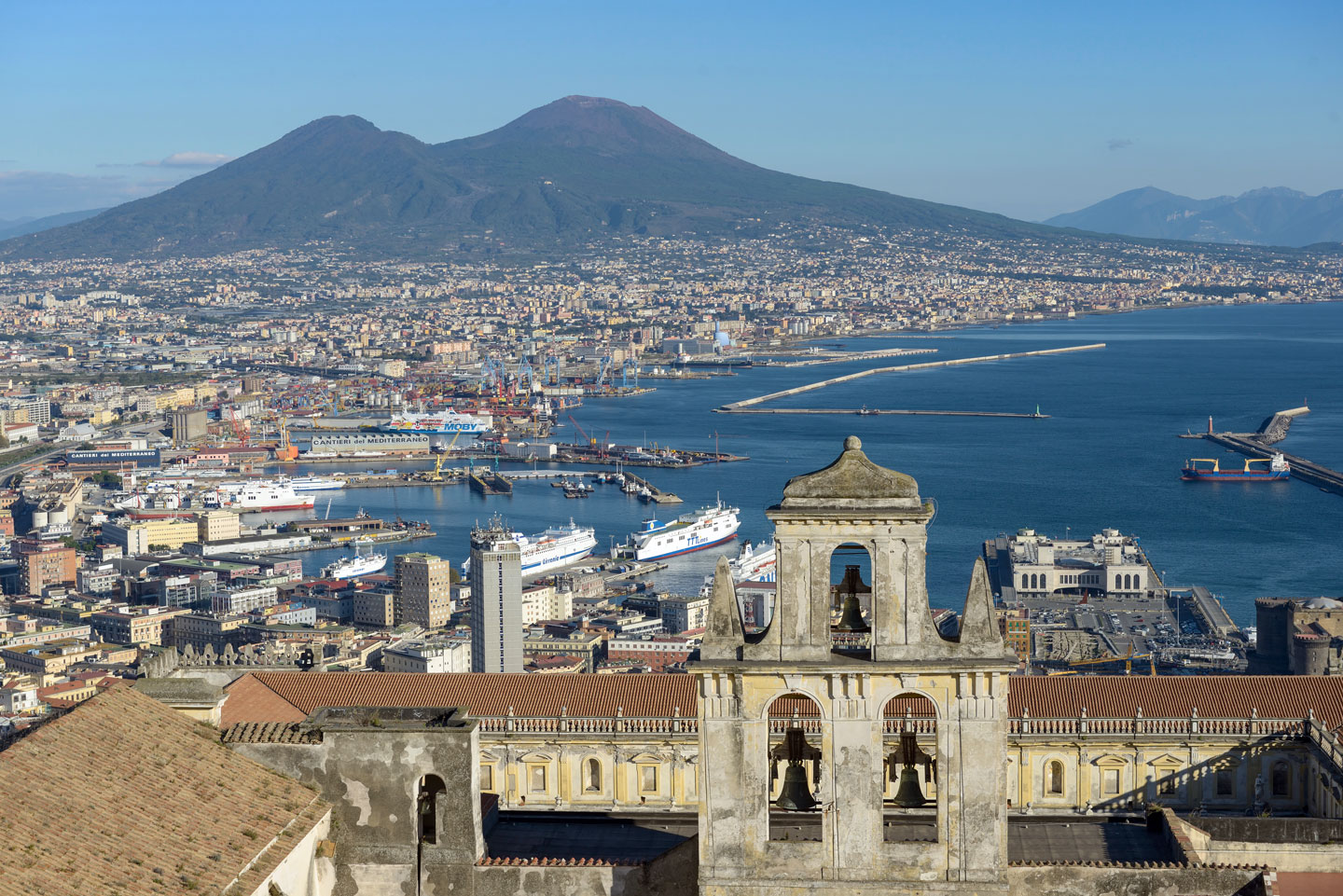 The Mediterranean port of Naples, Italy's southern capital. Seen in the foreground is the Certosa di San Martino, a former monastery, and the Vesuvius, a 1.277 m high active volcano in the background. A violent eruption of Vesuvius in 79 CE buried the ancient cities of Pompeii and Herculaneum.
Photo: Wolfgang Moroder


Durrës is Albania's second-largest city and the country's chief port.

The Port of Rijeka on Kvarner Bay in the northern Adriatic Sea is Croatia's main port.

The Port of Koper, just south of the Italian port city of Trieste, is Slovenia's chief port.

African ports in the Mediterranean Sea
Morocco
Tangier Med is a busy port on the Moroccan side of the Strait of Gibraltar; the port lies opposite the Spanish Port of Algeciras.

Algeria
The Port of Algiers is the main seaport of Algeria.

Tunisia
The Port of Tunis (La Goulette) is the port of Tunisia's capital and the most important port in the country.

Libya
The Port of Tripoli is the most important seaport in Libya, the capital of Libya.

Egypt
Egypt's most important port is the Port of Alexandria in Alexandria, the country's second city and former capital.
Port Said, a seaport at the northern end of the Suez Canal, the artificial waterway that connects the Mediterranean Sea with the Red Sea.

Kotor is an ancient Mediterranean trading port city and a cultural center at the end of the Bay of Kotor in the Adriatic Sea in Montenegro.
Image: Marcin Szala

The map shows the location of the following countries that have a shoreline at the Mediterranean Sea:

More about the Mediterranean

Map of the Balkan Peninsula