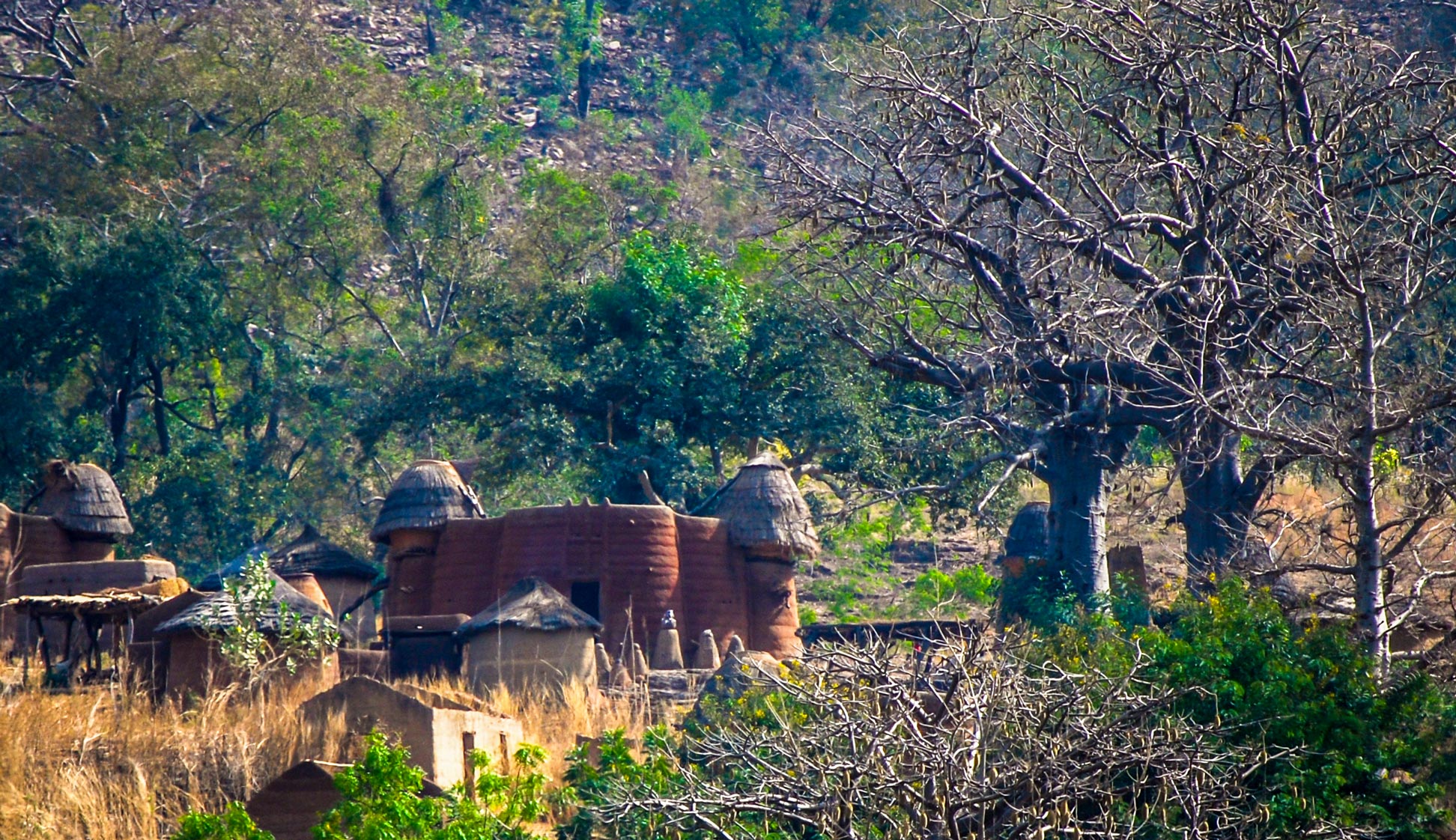 Koutammakou in northeastern Togo is known as the Land of the Batammariba. The cultural landscape was declared a World Heritage Site by UNESCO in 2004. The highlights of the living landscape are the mud tower houses, the traditional settlements of the Batammariba. The buildings are grouped in villages, with ceremonial sites, springs, sacred stones and places for initiation ceremonies.
Image: CIFOR 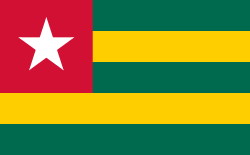 Flag of Togo
The map shows Togo (officially the Togolese Republic), a long-stretched country in West Africa with a short coastline on the Bight of Benin (Gulf of Guinea).

The thin strip of land running north to south has an area of 56,785 km²; it is about two-thirds the size of Austria or slightly smaller than the U.S. state of West Virginia. It borders Benin, Burkina Faso and Ghana. The country stretches from north to south across several geographic regions and climatic zones, from dry savanna in the north to tropical in the south.

Togo has a population of 8.6 million people (in 2020); the largest city, chief port, and national capital is Lomé in the southwest of the country. Spoken languages are French (official) and a variety of West African languages.
There are about 40 different ethnic groups, and as many distinct languages are spoken. Major ethnic groups are Ewe, Kabye, Temba, and Gurma. About 44% of the population is Christian, with Catholics being the largest denomination. About 36% practice traditional animism (traditional religion). Voodoo plays an important role in society. 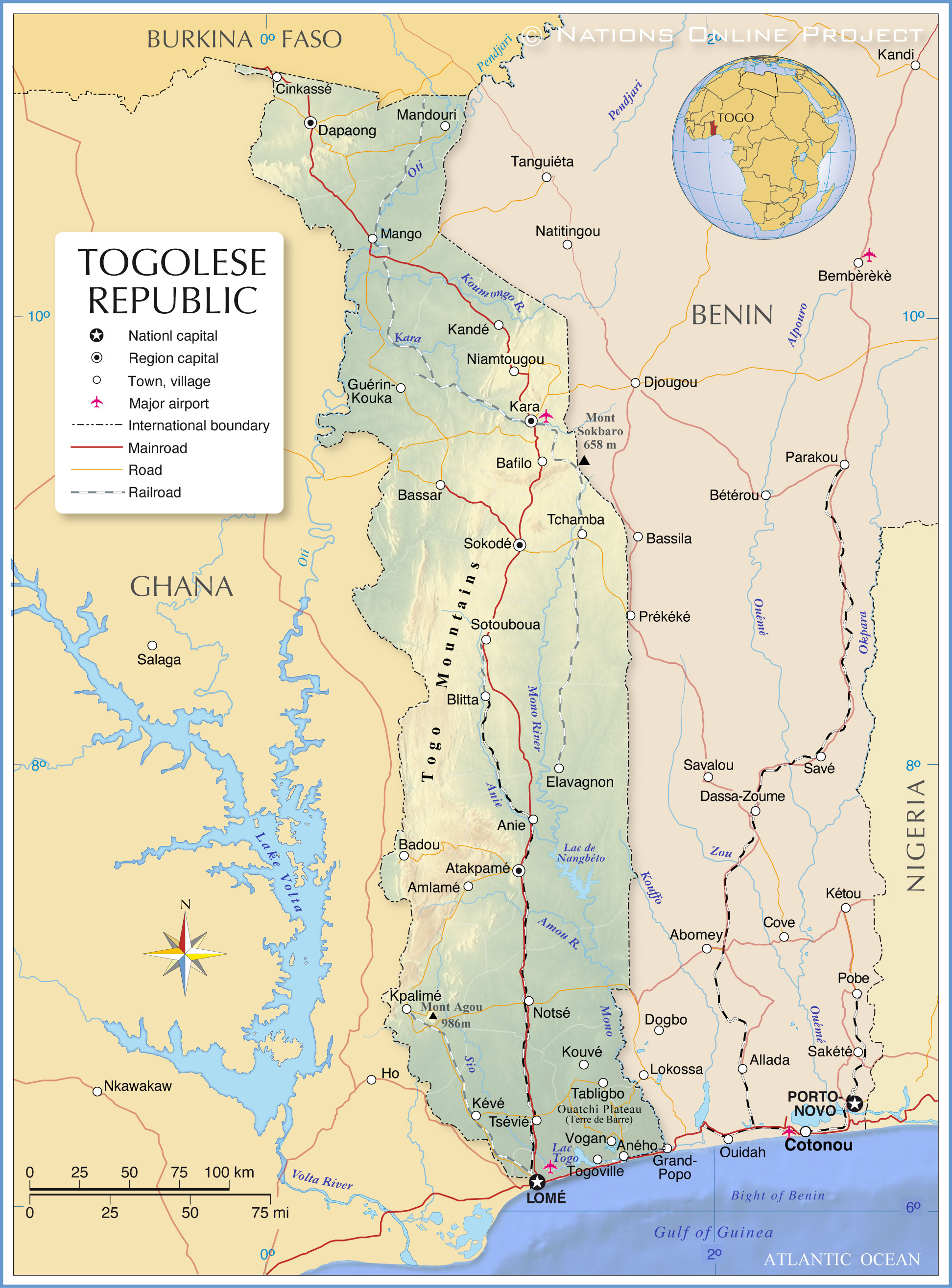 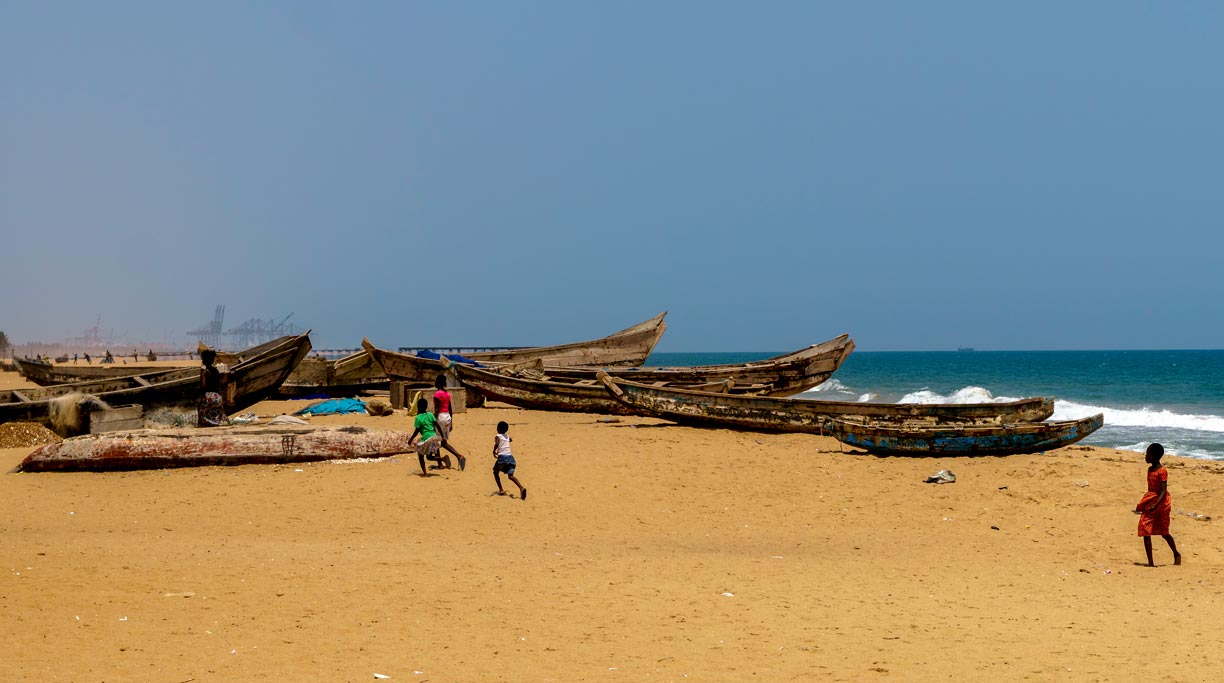 Kids playing on the beach of Lomé. The port cranes of the capital are barely visible in the haze in the background. Located on the Gulf of Guinea, the city is the administrative and industrial center of the country. Togo's international port, from which coffee, cocoa, copra, oil palm kernels and other goods are exported, also serves as an important transit point for cargo to neighboring countries.
Photo: Dan Sloan

The Republic of Togo is a Sub-Saharan country divided into five administrative units and six geographical regions.

From north to south
The plains in the northern third of Togo are in the Sudan Savanna ecoregion, a hot, dry, forested savanna with shrubs and trees and tall elephant grass.

In the center of the country, the plains are interrupted by a low mountain range that stretches from the region around Niamtougou in the northeast through central Togo and along the border between Togo and Ghana to Kpalimé in the southwest. The range of hills, which reaches up to 700 m in height, is known as the Chaîne de l'Atacora (Atakora Range) or Togo Mountains.

This low mountain range forms a plateau in the southwest with elevations between 400 and 800 meters. There, near the border with Ghana and southeast of Kpalimé, is the highest point in Togo, Mount Agou, formerly known as Baumann Peak, a single forested mountain that rises from the plain to 986 meters. 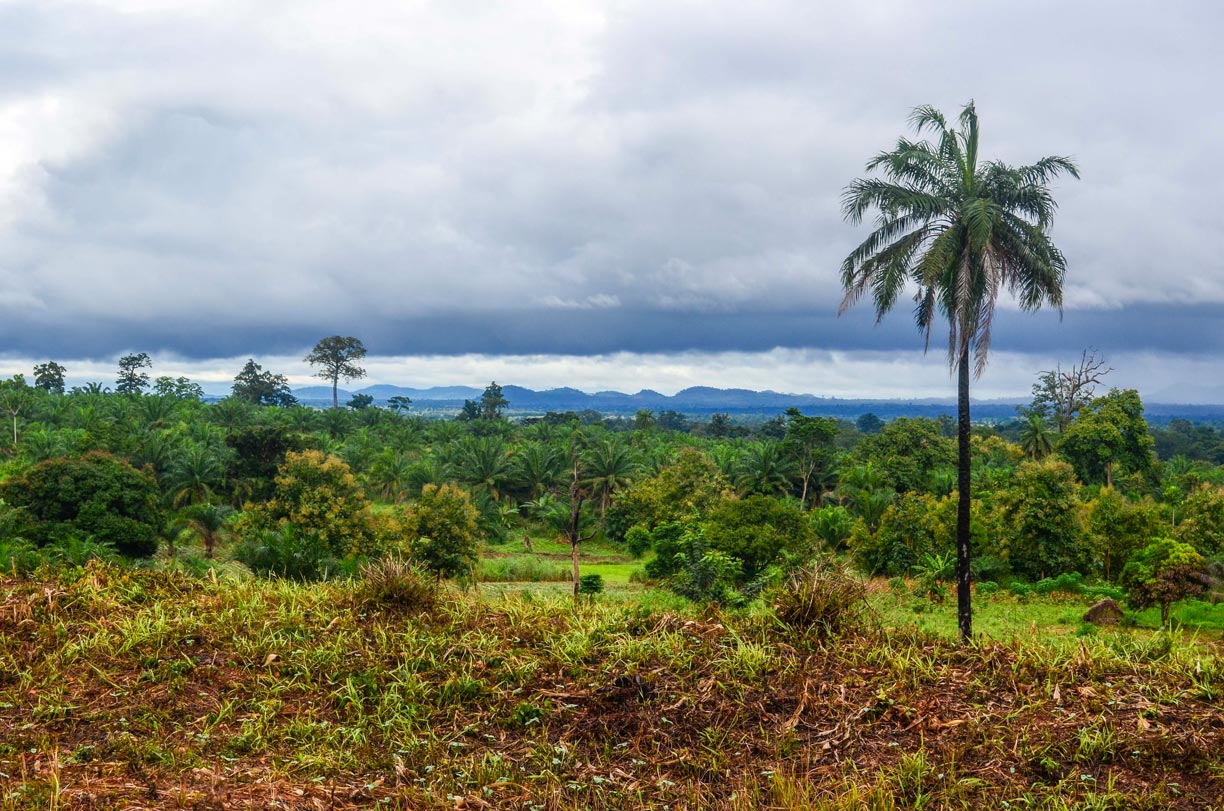 Rain clouds over the landscape in the Plateaux region near Amou Oblo in southwestern Togo.
Photo: jbdodane

South
The southern quarter of Togo lies within the Guinean forest-savanna mosaic, a belt-like zone of interwoven forests, savannas, and grasslands that extends from southern Senegal to eastern Nigeria and covers large areas of the southern West African nations.

In Togo, the dry forest-savanna region extends all the way south to the coast; geographers named it the Dahomey Gap, the absence of tropical moist forests.
To the east of the coastal plain, the land rises gently to a low plateau covered by the red soil of the Terre de Barre (Ouatchi Plateau).

The landscape of the low-lying coastal plain on the Gulf of Guinea is characterized by sandy beaches, palm plantations, tidal flats, marshlands and extensive lagoons, of which Lake Togo is the largest.

Major rivers and lakes of Togo
The Oti flows through Benin and Togo and joins the Volta River in Ghana; its main tributaries are the Kara and Koumongo rivers.
The Mono is the main river in eastern Togo. In the southeast, it forms part of the border between Togo and Benin before flowing into the Bay of Benin (Atlantic Ocean). Lac de Nangbéto is a reservoir on the Mono River. The Amou and Anie rivers are the main tributaries of the Mono.
Togo's largest lake is Lake Togo (French: Lac Togo), a lagoon between Lomé and Aného, separated from the Bay of Benin by a narrow coastal strip. The lake is fed by the Sio River.

Climate
The climate in Togo varies from semi-arid in the north to tropical in the south of the country.

Transportation
Togo is served by Lomé-Tokoin Airport (IATA code: LFW); it is Togo's primary international airport. The railway in the country, built in colonial times, is since years out of service. Except for two sections, the state railway network was shut down in 1999.
The autonomous Port of Lomè is a major transportation hub. It is the only deep-water port on the West-African coast that can accommodate larger 3rd generation vessels.

Natural resources
Togo's natural resources are phosphates (the main source of foreign exchange), limestone, marble, and arable land. It has some deposits of iron, gold, bauxite, chromite, and manganese.

Natural Hazards
Togo is increasingly affected by extreme weather conditions. The country suffers from unpredictable periodic droughts that lead to desertification and flooding due to climate change. [DRK/GRC]

Environment issues
Due to the Dahomey Gap and human activities, there is very little rainforest left in Togo, and what is left is severely depleted and fragmented; there is no primary rainforest in Togo. Deforestation is attributed to slash-and-burn agriculture and the use of wood for fuel.

The map shows the location of the following cities and towns of Togo: