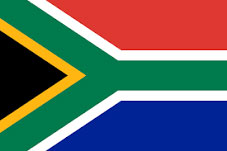 Flag of South Africa
The map shows South Africa, the African nation that occupies the most southern part of the continent. The country, also known as the Rainbow Nation, borders Namibia, Botswana, Zimbabwe, Mozambique and Eswatini (Swaziland). The Kingdom of Lesotho, a small, landlocked mountainous country, forms an enclave within South Africa. South Africa borders the Atlantic Ocean to the west and the Indian Ocean to the south and southeast.

The country has a population of 59.6 million people (official estimate 2020). South Africa is the only country in the world with three capitals; administrative capital is Pretoria; legislative capital is Cape Town, the former capital of the British Cape Province; the judicial capital is Bloemfontein (Mangaung). The Constitutional Court is located in Johannesburg, South Africa's largest city.

There are eleven official languages in South Africa. The most commonly spoken languages are Afrikaans, English, Sepedi and Sesotho; the others are Swazi (siSwati), Tsonga, Tswana, Venda, isiXhosa and isiZulu. 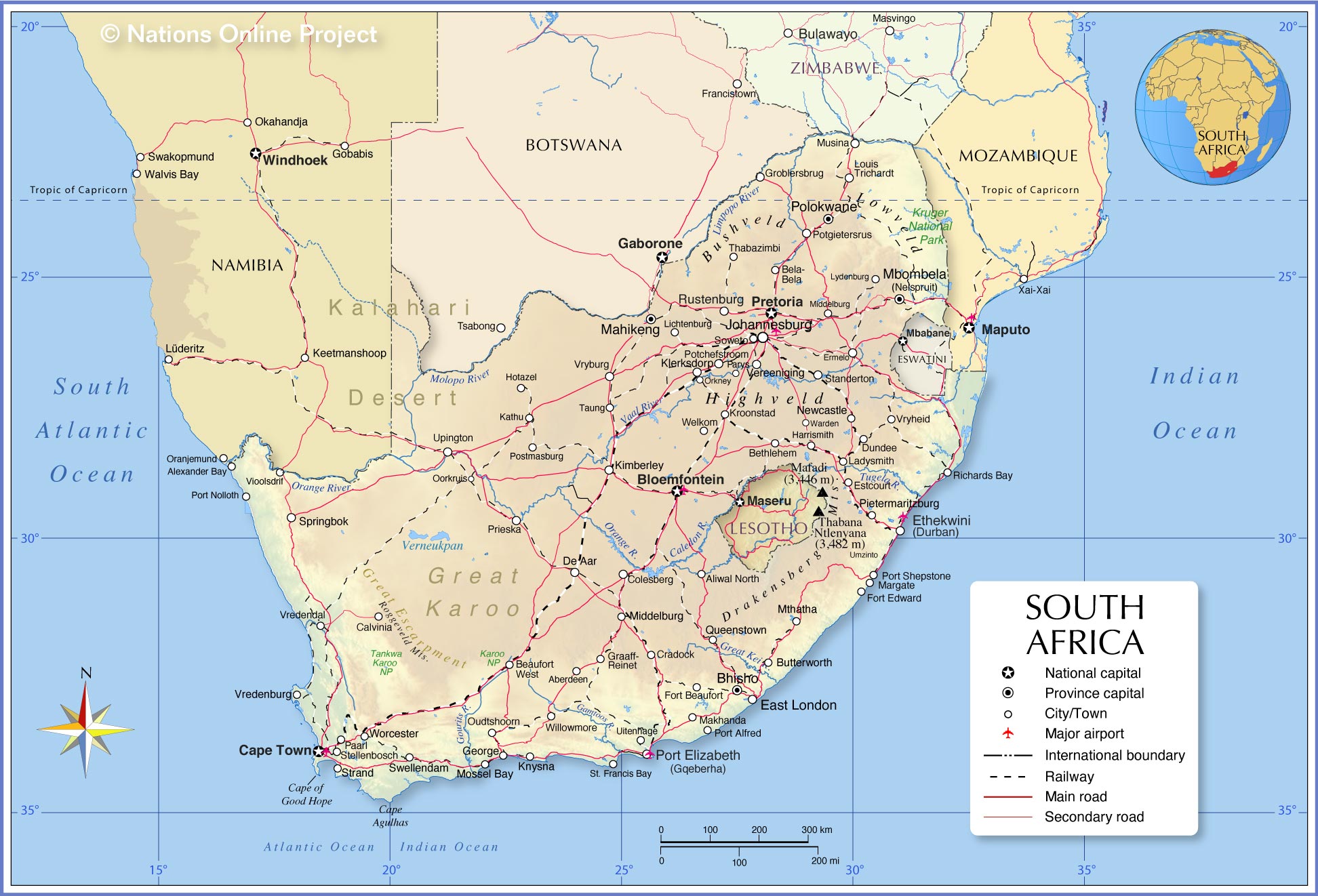 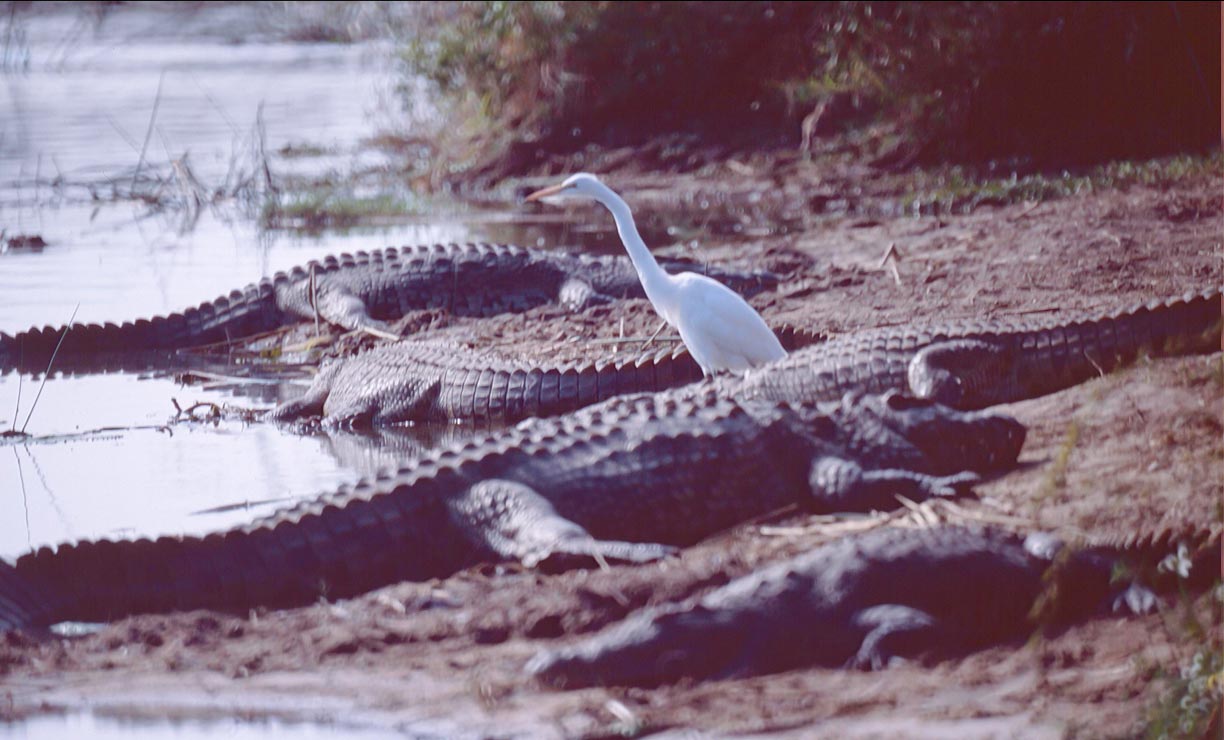 Kruger National Park, South Africa, a Yellow-billed Egret among a group of Nile crocodiles. The game reserve was established in 1898 by President Kruger and became a national park in 1926.
Photo: Patrik M. Loeff

South Africa is about twice the size of France; its landscape includes grasslands, scrublands, forests, deserts, mountains, coastal wetlands and a 2,700 km long coastline on the South Atlantic Ocean to the west and the Indian Ocean to the east.

The territory of South Africa is dominated by a huge Central Plateau, which is framed by the ridges of the Great Escarpment that separates the plateau from the narrow coastal lowlands.

The country is home to almost 300 mammal species, about 860 bird species and 8,000 plant species.

Cape Agulhas is the southernmost point of the African continent. The 20th meridian, located on Cape Agulhas, represents the imaginary boundary between the Atlantic Ocean and the Indian Ocean.

South Africa's Velds
Velds are mainly the flat or plateau-like regions in the interior of the country.
The Bushveld is a sub-tropical woodland ecoregion north of Pretoria and the Witwatersrand ridge.
The Highveld is the name given to the highlands of South Africa that slope down towards the north. The vegetation is mainly grassland; only in the hills and the river terraces there is scrubland. 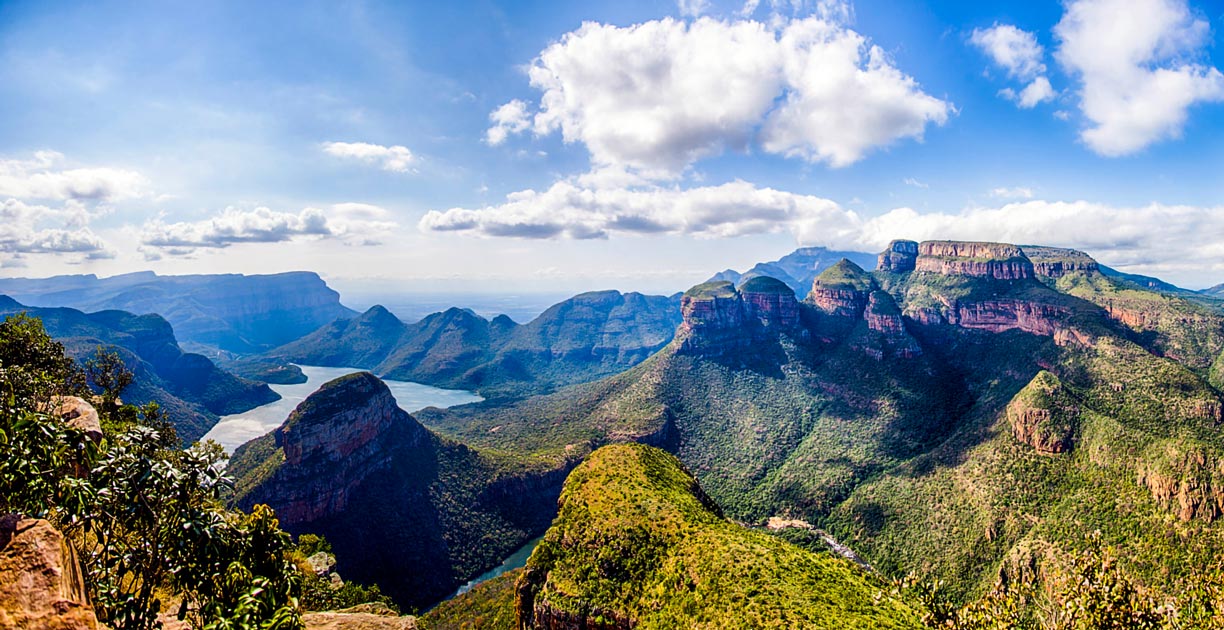 
Rivers
The longest river in southern Africa is the Orange River (from Afrikaans/Dutch: Oranjerivier). The river rises in the Drakensberg Mountains in northeastern Lesotho and flows west for about 2,000 km; it forms Namibia's southern border with South Africa and flows into the Atlantic Ocean. The largest tributary of the Orange River is the Vaal River. The 1,120 km long river rises north of Ermelo in the province of Mpumalanga.
The confluence of the Marico and Crocodile Rivers creates the Limpopo River. The second largest river in South Africa generally flows eastward, where it forms part of South Africa's border with Botswana and the border with Zimbabwe; it flows through Mozambique and empties into the Indian Ocean.


Kalahari Desert
The Kalahari Desert is a vast thornbush savanna in southern Africa that encompasses much of Botswana and parts of Namibia, as well as South Africa's border region with both countries. 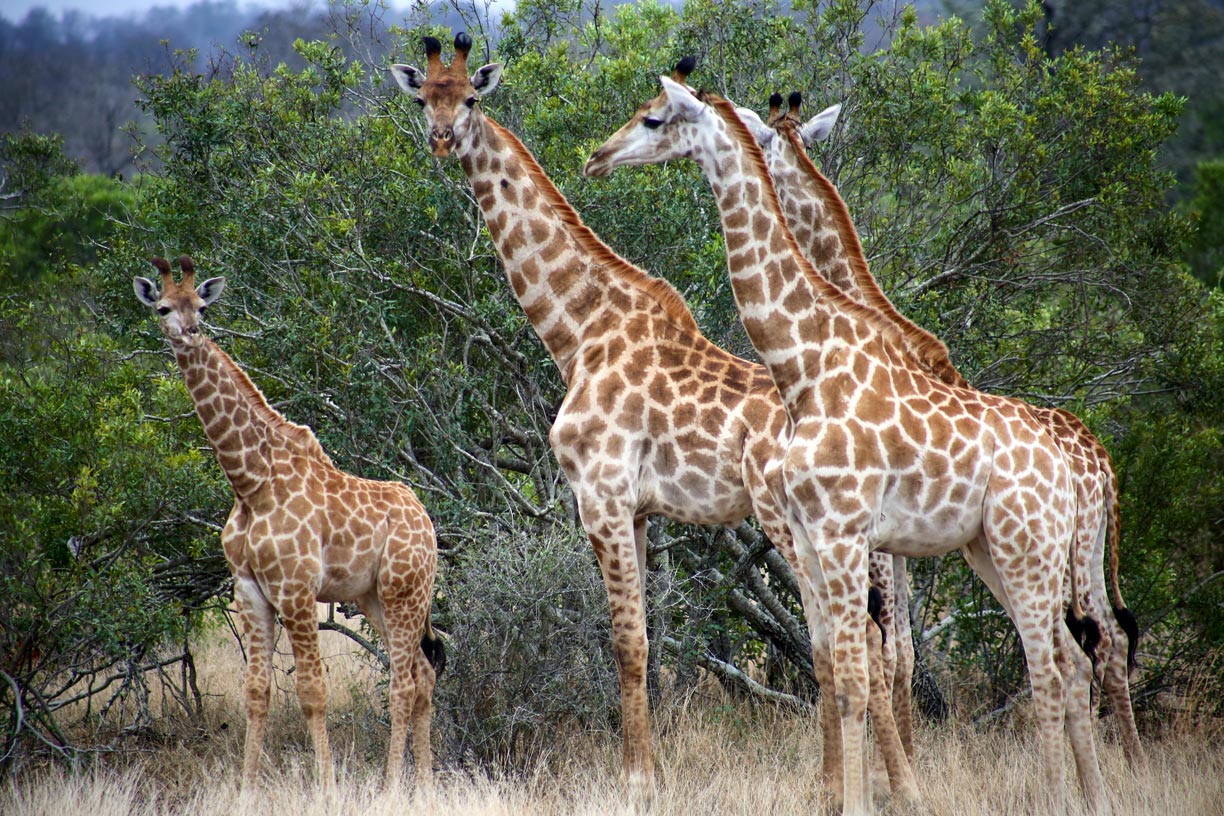 Cape giraffes in Kruger National Park. With an area of 19,623 km² the park is one of the largest game reserves in Africa.
Photo: flowcomm


National Parks
Among the more than 20 national parks in South Africa, Kruger National Park is probably the most important and the most famous. It is one of Africa's largest game reserves and the country's first national park (est. in 1926). Since 2000, Kruger National Park has been part of a 35,000 km² transboundary protected area (TBPA), the Great Limpopo Transfrontier Park, which links Kruger National Park with Gonarezhou National Park in Zimbabwe and Limpopo National Park in Mozambique.
The Kgalagadi Transfrontier Park is a large game reserve in the Kalahari Desert shared by Botswana and South Africa. The park is home to big cats and hyenas as well as migratory herds of large herbivores such as gnus, springbok and other antelopes and gazelles.
The Addo Elephant National Park is the third largest wildlife reserve in South Africa and is located near Port Elizabeth; it was established in 1931 to provide a refuge for the eleven remaining elephants in the region. Today it is home to more than 600 elephants and a large number of other mammals.


Climate
The climate of South Africa ranges from a subtropical climate in the southwestern corner, the winter rainfall region of South Africa around Cape Town. There is an arid desert climate in the northwest (Kalahari), a semi-desert climate in the Great Karoo region, while the interior Central Plateau (Highveld) has a temperate climate. Southern Africa has warmed twice as fast as the rest of the world over the past five decades, with serious consequences for the population, agriculture and the environment. 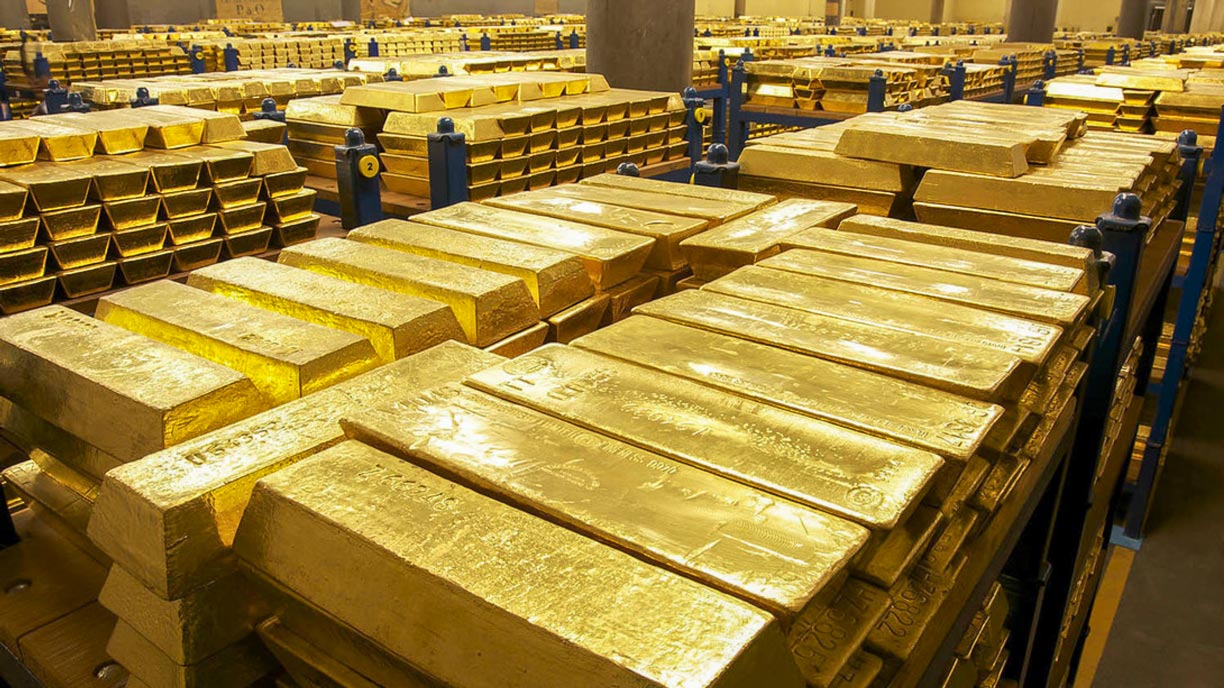 The fruits of hard labor - Pure Gold from the Mponeng Gold Mine in Carletonville in South Africa's Gauteng province. The mine lies in the center of the richest gold-mining area in the world. Gold at the Mponeng mine is mined at a depth of 3.16 km to 3.84 km. At this depth, the rock reaches a temperature of 66 °C (151 °F). To cool the tunnel air to below 30 °C (86 °F), ice slurry is pumped underground.
Photo: MPO Mine

South Africa's Natural Hazards
Natural disasters are rare in South Africa, but many human-made hazards can lead to disasters, such as mining disasters, environmental disasters (oil spills), and terrorist incidents.

The map shows the location of the following South African cities and towns: