The Nile River near Aswan in southern Egypt, with the Mausoleum of Aga Khan on the hill in the background.
Image: Ahmedherz 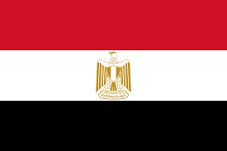 The map shows Egypt, a country situated mainly in the northeastern corner of the African continent bordering the Mediterranean Sea in the north and the Gulf of Suez, the Gulf of Aqaba, and the Red Sea in the east. The eastern portion of Egypt, the Sinai Peninsula, is situated in Western Asia (Middle East).

Modern Egypt became independent in 1922 (from Britain). From 1958 to 1961, the country was united with Syria as the United Arab Republic.

Egypt has a population of some 102 million (in 2021). The capital and by far the largest city is Cairo, with a population of 20 million people in its metropolitan area (including the governorate of Giza). Spoken language is Modern Standard Arabic; the colloquial language is the Egyptian-Arabic dialect. The main religion is Sunni Islam (85-90% of the population), about 10-15% of the Egyptians are Coptic Christians. 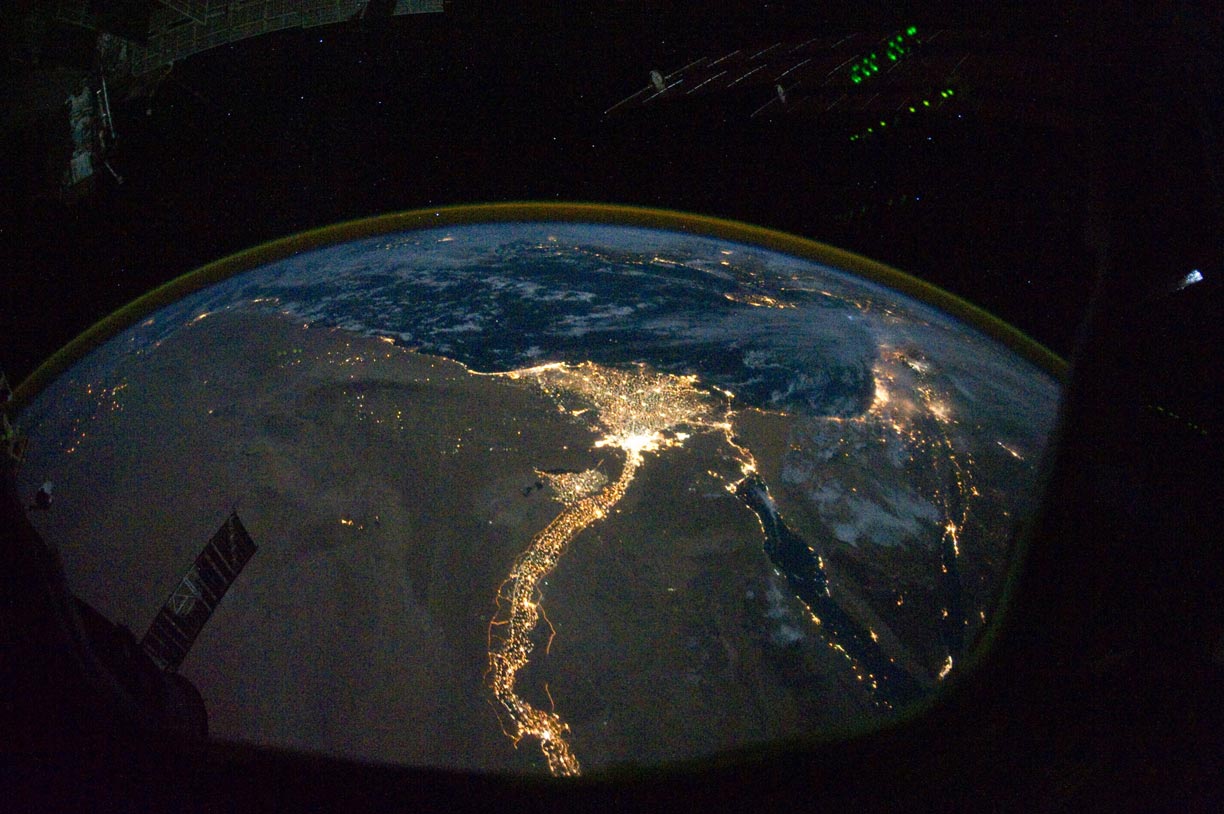 This night view of Egypt shows that the population is almost entirely concentrated along the Nile Valley, which makes up only a small portion of the country's land area. Onboard the International Space Station, Astronauts capture nighttime photographs of city lights, spectacular evidence of humanity's existence, distribution, and ability to change the environment.
Photo: NASA Earth Observatory

The inhabitants of the most populated country in the Arab world settled predominantly along the fertile valley of the Nile river, its delta, and along the coastal plains of the Mediterranean and the northern part of the Red Sea coast.

Except for those near the coast, all major cities in the country lie along the Nile valley. The rest of the country is largely desert and sparsely populated.

The Upper Nile is the life-sustaining artery of Egypt. The fertile alluvial plains of the river were one of the regions in the world where humans began the transition from a hunting and gathering society to sedentary living and the development of agriculture and the domestication of food animals.


The Nile
The Nile is the longest river in the world or the second longest; experts are still debating. The life source of Egypt has two major tributaries, the White Nile, which begins in the drainage basin of Lake Victoria, Africa's largest lake, and the Blue Nile, originating at Lake Tana in Ethiopia.
The river flows northward for 6,650 km (4,132 mi) through Uganda, South Sudan, Sudan, and Egypt, and empties into the Mediterranean Sea through a large delta.


Suez Canal
The Suez Canal is a 160 km (100 mi) long shipping canal that connects the Gulf of Suez (Red Sea) with the Mediterranean Sea. The southern terminus of the channels is at the seaport of Suez; the northern terminus is at Port Said, a city founded in 1859 during the building of the canal. The canal separates the western portion of Egypt from the Sinai Peninsula, the African continent from Asia.


Lake Nasser
Lake Nasser is a reservoir in southwestern Egypt created between 1960 and 1970 by building two dams on the Nile River south of the city of Aswan.
The construction of the dam resulted in the 355 km (220 mi; including the Sudanese part) long Lake Nasser, one of the largest human-made lakes in the world. 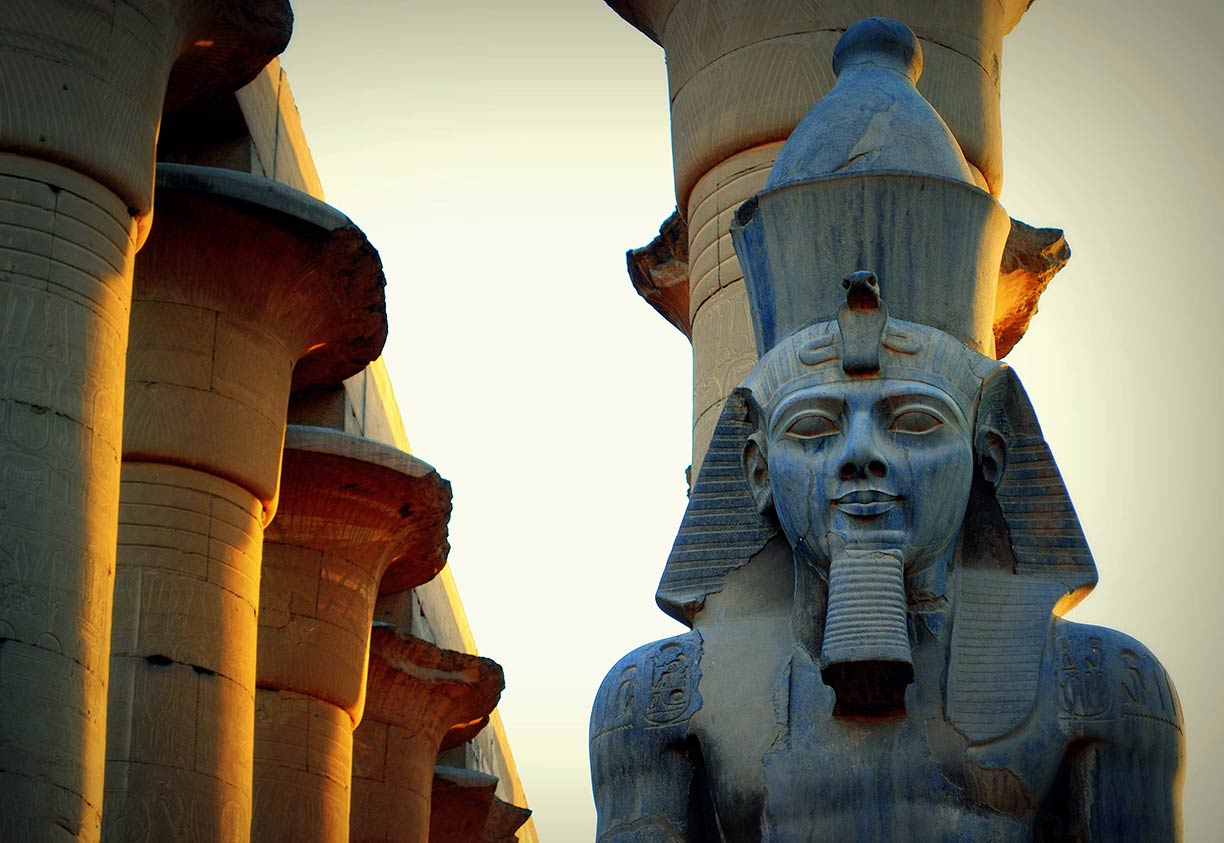 Statue of Ramses II in the Temple of Luxor.
Photo: Mohammed Moussa


Cities
Egypt's largest cities are
Cairo, capital of Egypt and one of the largest urban agglomerations in Africa.

Giza, the third-largest city and the location of the Giza Pyramids and the Great Sphinx. Giza is part of the Cairo metropolitan area.

Suez, the seaport on the north coast of the Gulf of Suez, is the southern terminus of the Suez Canal.

Luxor, the largest city in central Egypt, is home to the Luxor Temple and the World Heritage Site of Ancient Thebes with its Necropolis.

Mansoura, a city in the Nile delta region on the east bank of the Damietta branch of the river.

Tanta, another large city in the delta region and a center of Egypt's cotton industry.

The map shows the location of the following cities, towns, and oases:

Searchable map/satellite view of Giza Pyramids and the Great Sphinx

Satellite View and Map of Egypt