Sunset on the Avenue of the Baobabs. The Baobabs, the "roots of the sky," are the famous landmarks of Madagascar. These enormous trees can live between 1,100 and 2,500 years.
Image: Tee La Rosa 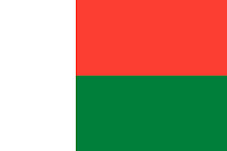 The mini-continent we now know as Madagascar is possibly the world's oldest island; it has been isolated for about 80 million years. The prehistoric breakup of the supercontinent Gondwana separated the Madagascar-India landmass from Africa about 150 million years ago. Seventy million years later, Madagascar split off from the Indian tectonic plate. Due to its isolated location in a remote area of the Indian Ocean, flora and fauna on the island have developed independently, and many of its plants and animals are found only there.

With an area of 587,041 km², the island is slightly larger than France or twice the size of the US state of Arizona. Madagascar has a subtropical to tropical maritime climate. It has a population of more than 28 million people (in 2021). The capital and largest city is Antananarivo. Spoken languages are Malagasy and French. Christianity is the predominant religion, with more than 80% of the population nominally Christian, but traditional beliefs are deeply rooted in society. 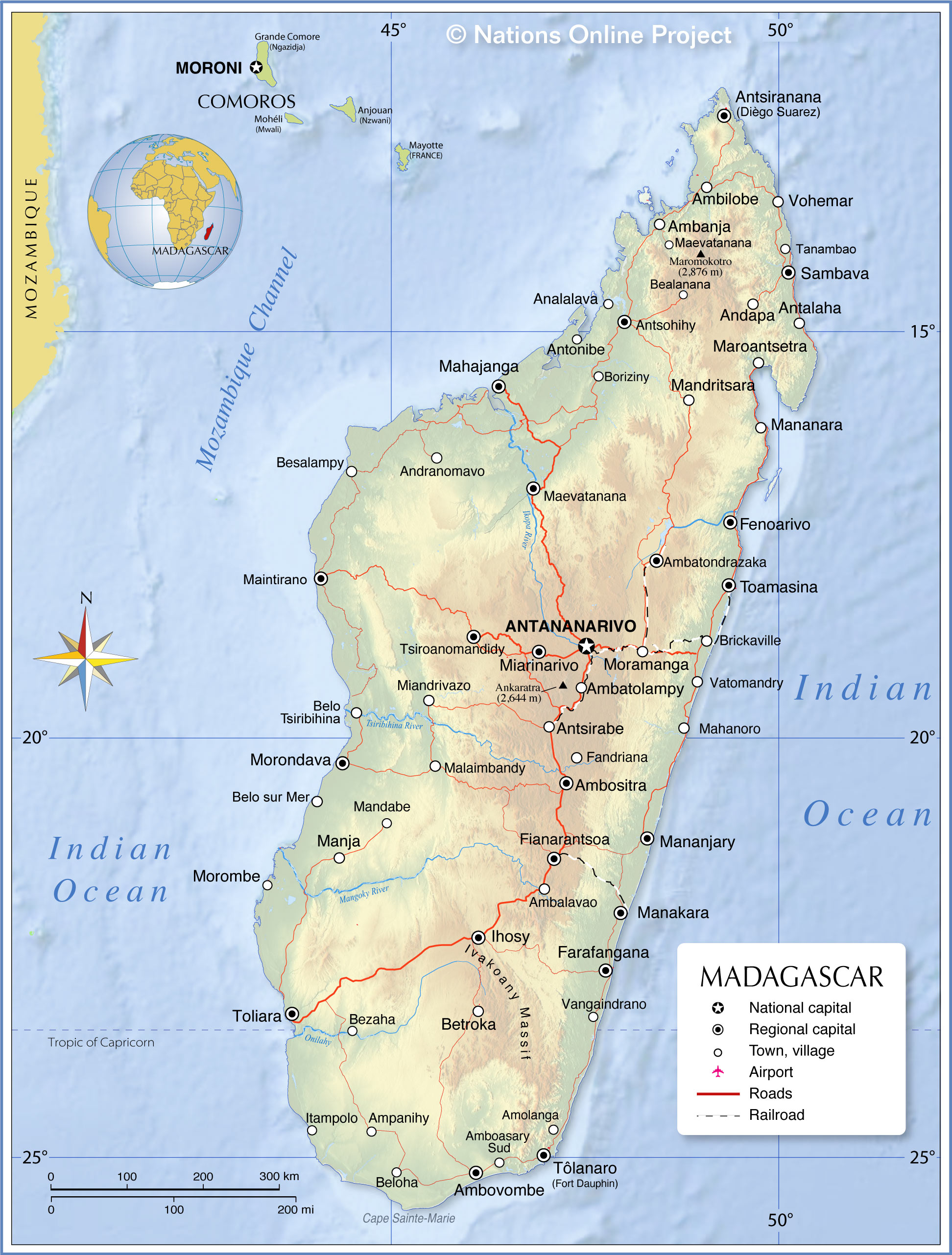 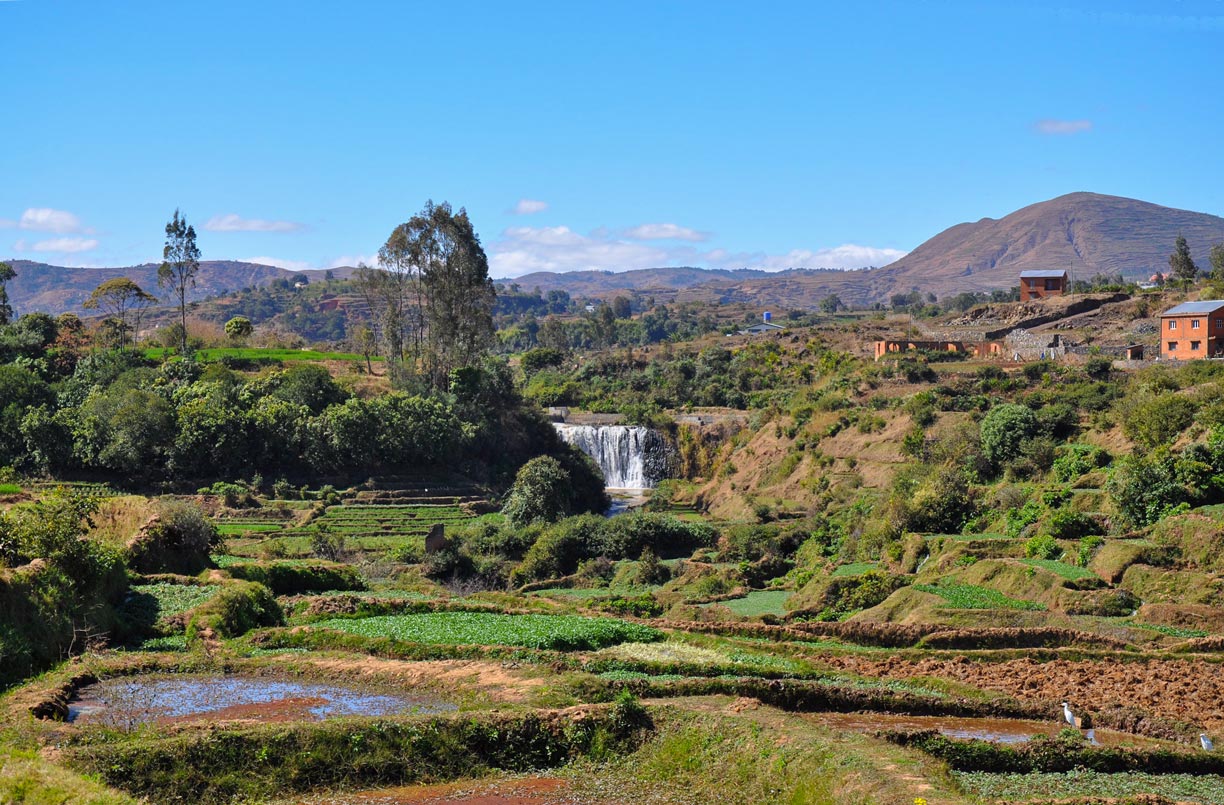 A waterfall and rice paddies in the highlands of Madagascar. Rice is the most important crop in Madagascar.
Photo: Per Edin

Madagascar, the Red Island, the Rainbow Island and the Eighth Continent - there are many names for the fourth-largest island in the world.

Madagascar is located in the southwestern part of the Indian Ocean, east off the coast of Africa, about 420 km away from the coast of Mozambique.
The country comprises the main island and some smaller offshore islands.

Madagascar is considered one of the world's top ten biodiversity hotspots. The island nation is inhabited by various ethnic groups of Southeast Asian, African and Arab descent.

Archaeological research in the 20th century revealed that human settlers reached Madagascar about five centuries before Europeans discovered the island; seafarers from the Sunda Islands (today Indonesia and Malaysia) arrived around the first century AD, and Arabs followed in the sixth century and established (slave) trading posts there.

Madagascar did not gain full independence (from France) until June 1960. 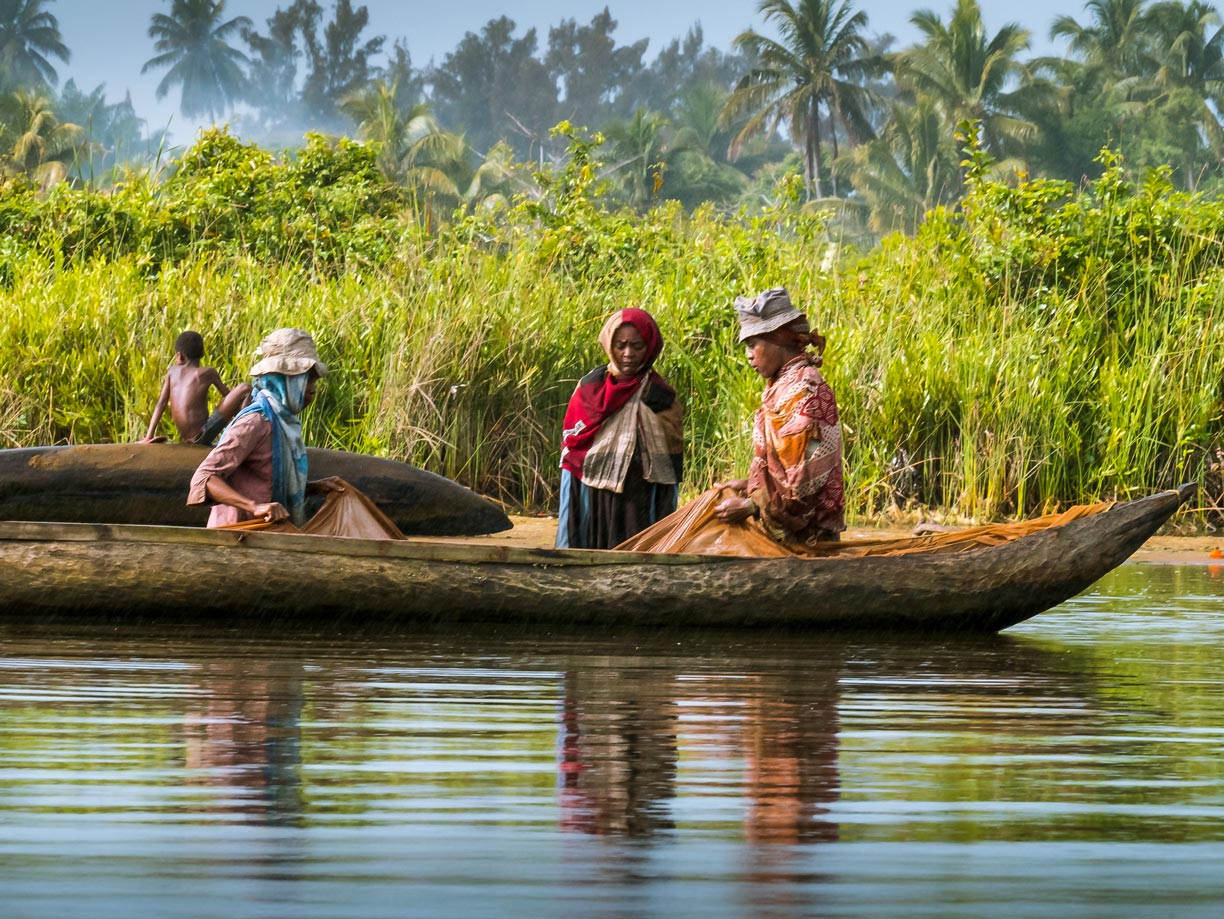 Fishing on the Canal de Pangalanes, a series of rivers, waterways and human-made lakes along the eastern coast.
Photo: anmede

The geographical landscape of the world's second-largest island nation is divided into five general regions: the east coast, the Tsaratanana Massif, the Central Highlands, the West Coast and the Southwest.

East Coast
The east coast consists of a strip of lowland about ten to fifty kilometers wide. The transition zone between the coastal plain and the highlands is where most of the country's protected areas are located. It includes the Masoala peninsula in the northeast, home to the Masoala National Park, the island's largest protected area.

Tsaratanana Massif
The forested Tsaratanana massif at the northern end of the island is a mountainous region, partly of volcanic origin. This massif is home to the highest mountain in the country, the Maromokotro peak (at 2,876 m).

Central Highlands
The central part of Madagascar is dominated by the Central Highlands (Hauts-Plateaux). The plateaus extend from the Tsaratanana Massif in the north to the Ivakoany Massif in the south and vary in altitude between 800 and 1,800 meters. Situated in the center of the highlands is Madagascar's capital Antananarivo.

West Coast
Madagascar's wind and water battered West Coast is more indented than the East Coast, especially in the northwest. Since ancient times, deep bays and well-protected harbors have attracted explorers, traders, and pirates from Europe, Africa, and Arabia. The fifty to seventy kilometers wide alluvial plains between Mahajanga and Toliara have great agricultural potential but are thinly inhabited and remain largely unexploited.

Southwest
The Southwest of Madagascar is bounded by the Ivakoany Massif to the east and the Isala Roiniforme Massif to the north. It includes two regions along the south coast, the Mahafaly Plateau and the desert region inhabited by the Antandroy people. 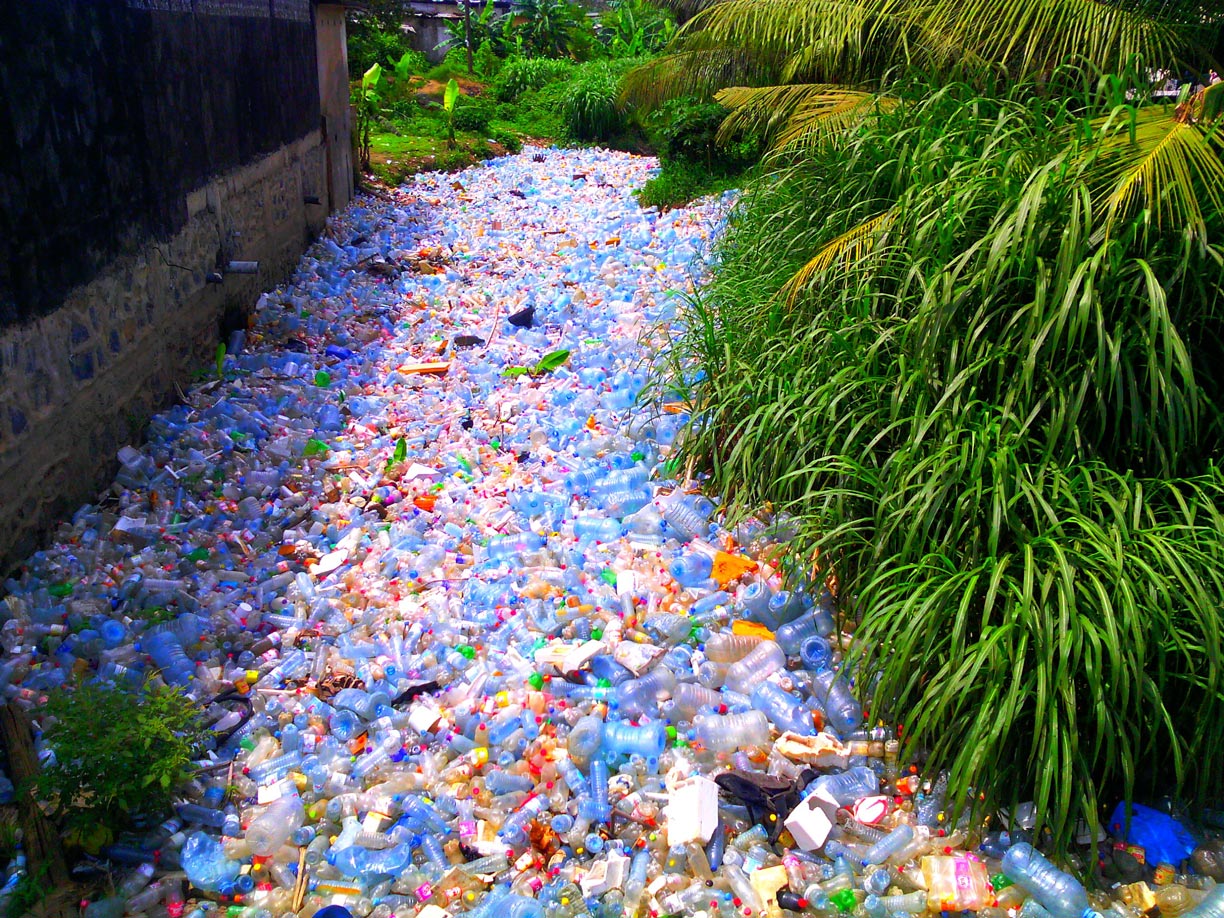 Civilization has arrived in Madagascar. A stream in the Malagasy city of Douala, swallowed by plastic pollution.
Photo: Mouenthias

The main rivers of Madagascar are the Betsiboka, the Ihosy-Zomandao River system, the Mangoky, the Onilahy, the Sofia, the Tsiribihina River and the Canal des Pangalanes, a series of natural rivers, waterways and human-made lakes. The largest river basins are located in the west. Most of the country's rivers originate in the highlands in the interior of the island. There they take in large amounts of sediment, often from the iron-rich red soils and rocks called laterites. These colorful waters flow down into one of the numerous muddy deltas along the coast. [Earthobservatory]

Madagascar's natural resources
Agriculture is the main pillar of the country's economy, which remains largely dependent on the export of agricultural products such as coffee, vanilla, sugar, rice and cotton fabrics. With its beaches and distinctive biodiversity, tourism is playing an increasingly important role in the country's economy (16% in 2019). Madagascar has deposits of copper, iron and manganese ores, graphite, rock salt, saltpeter, pyrite and some minor minerals. The country also has a technically feasible hydropower potential. The World Bank has urged Madagascar to invest in hydropower to reduce dependence on imported fossil fuels.

Madagascar's Environmental Issues
Madagascar is one of the world's highest priority countries for biodiversity conservation. This is due to its exceptional biodiversity, the large number of unique plant and animal species, and the extent of the environmental threats that the island is facing. Rapid population growth increases demand for land and natural resources, while environmental degradation is primarily due to slash-and-burn agriculture, firewood collection, and unsustainable wildlife trapping, destroying biodiversity and making many areas less productive for other uses. [USAID]

Some of the country's environmental problems are:
Erosion and soil degradation due to deforestation, fire clearing and overgrazing.

Madagascar's Natural Hazards
An increase in cyclonic rain results in severe flooding and widespread landslides, especially in Madagascar's central and eastern regions, which are frequently subject to landslides.

The map shows the location of the following Malagasy cities and towns: