Beni Isguen, a holy city surrounded by thick walls in the M'Zab valley near Ghardaïa in the Algerian Sahara. The five ksour (fortified cities) in the M'Zab Valley are a UNESCO World Heritage Site.
Image: Daggett.fr 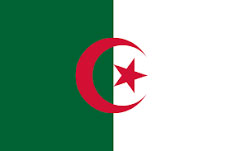 Algeria is a large country in western North Africa, with a coastline on the Mediterranean Sea to the north. The Maghreb state borders Morocco to the west, Mauritania and Mali to the southwest, Niger to the southeast, Libya to the east, Tunisia to the northeast, and has a short border with Western Sahara to the west. Algeria shares maritime borders with Italy and Spain.

The People's Democratic Republic of Algeria covers an area of 2,381,741 km²; it is somewhat larger than three times the size of Texas or almost eight times the size of Italy. Since the partition of Sudan, Algeria is the largest country in Africa.

Algeria has a population of about 44.7 million people (2021); the capital, chief port and largest city is Algiers.
Spoken languages are Arabic (official), various Berber dialects, recognized as "national language," and French (in business and education). 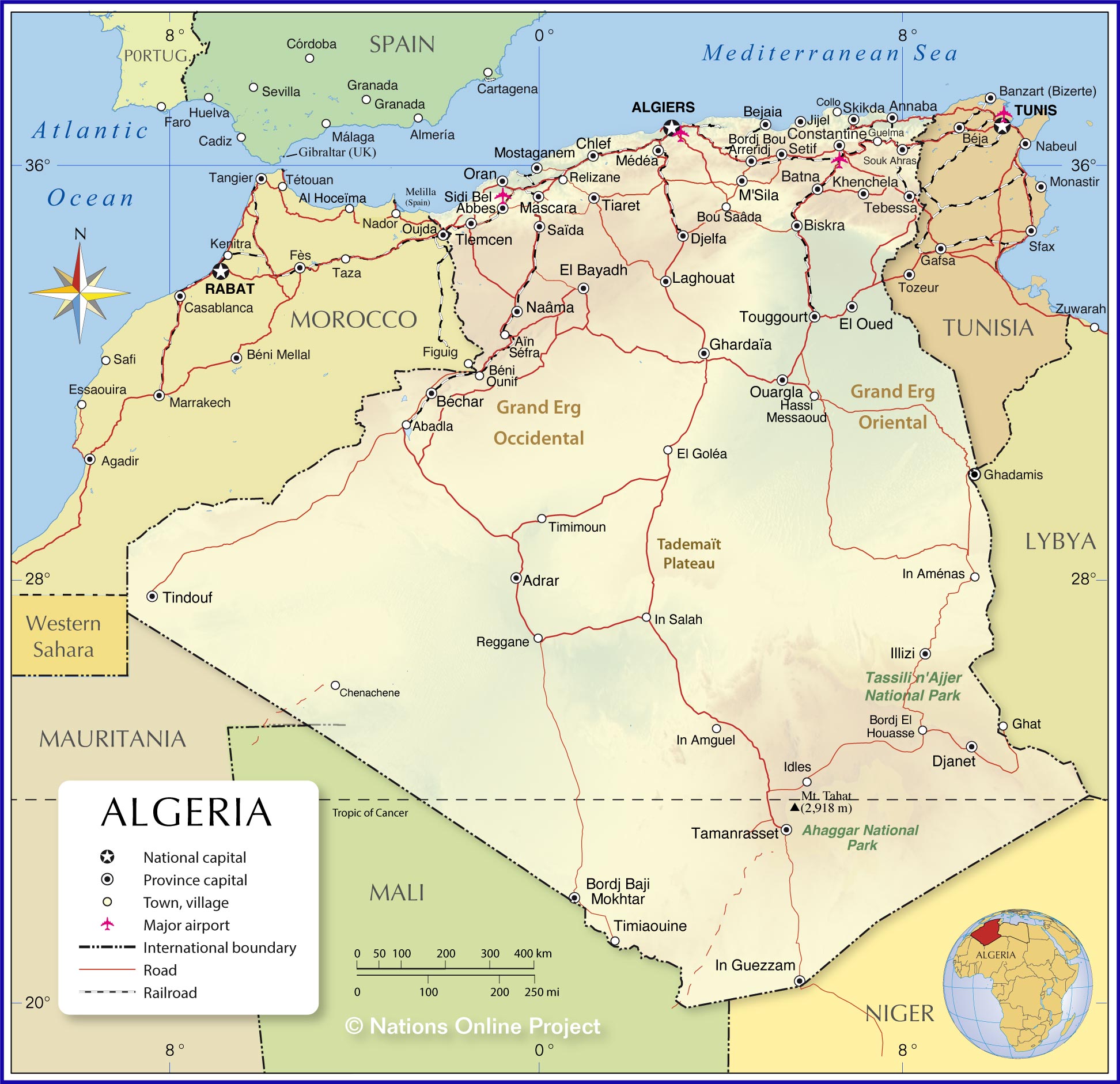 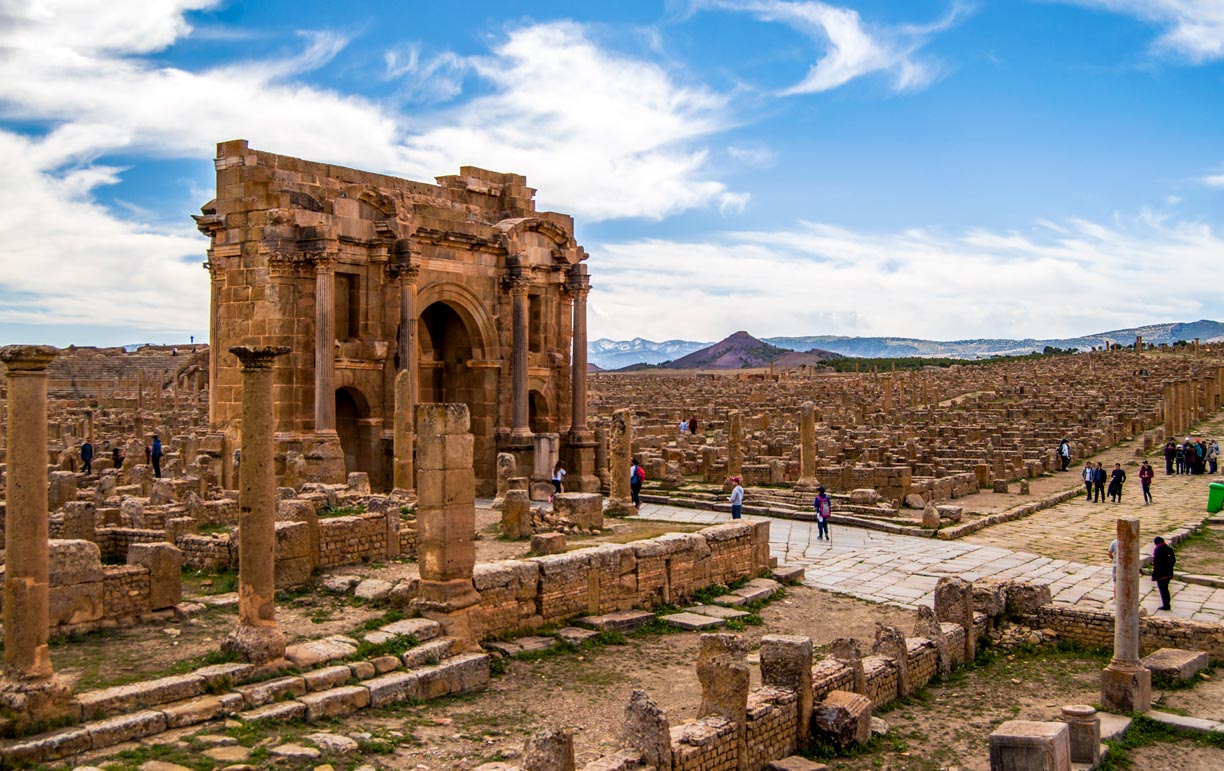 The ruins of Timgad, a Roman city in the Aurès Mountains in eastern Algeria. It was founded by the Roman Emperor Trajan around 100 CE.
Image: Araibia Amine (Artistou)


The inhospitable Sahara desert covers more than 80% of Africa's largest country. For this reason, the vast majority of people, about 90%, live in the country's heartland, the temperate hilly northern part and the fertile coastal plains along the Mediterranean Sea.

The northern region of Algeria is dominated by two parallel foothills of the Atlas Mountains. The Tell Atlas and the Sahara Atlas mountains.

The Tell Atlas extends mainly over northern Algeria and forms a natural barrier between the Mediterranean Sea and the Sahara. Several of Algeria's major cities are located at the foot of the Tell Atlas. To the east of the Tell are the Aurès Mountains.

Between the Tell and the Sahara Atlas are the Hautes Plaines (high plains); hilly, steppe-like plains with an average altitude between 1,100 and 1,300 m. 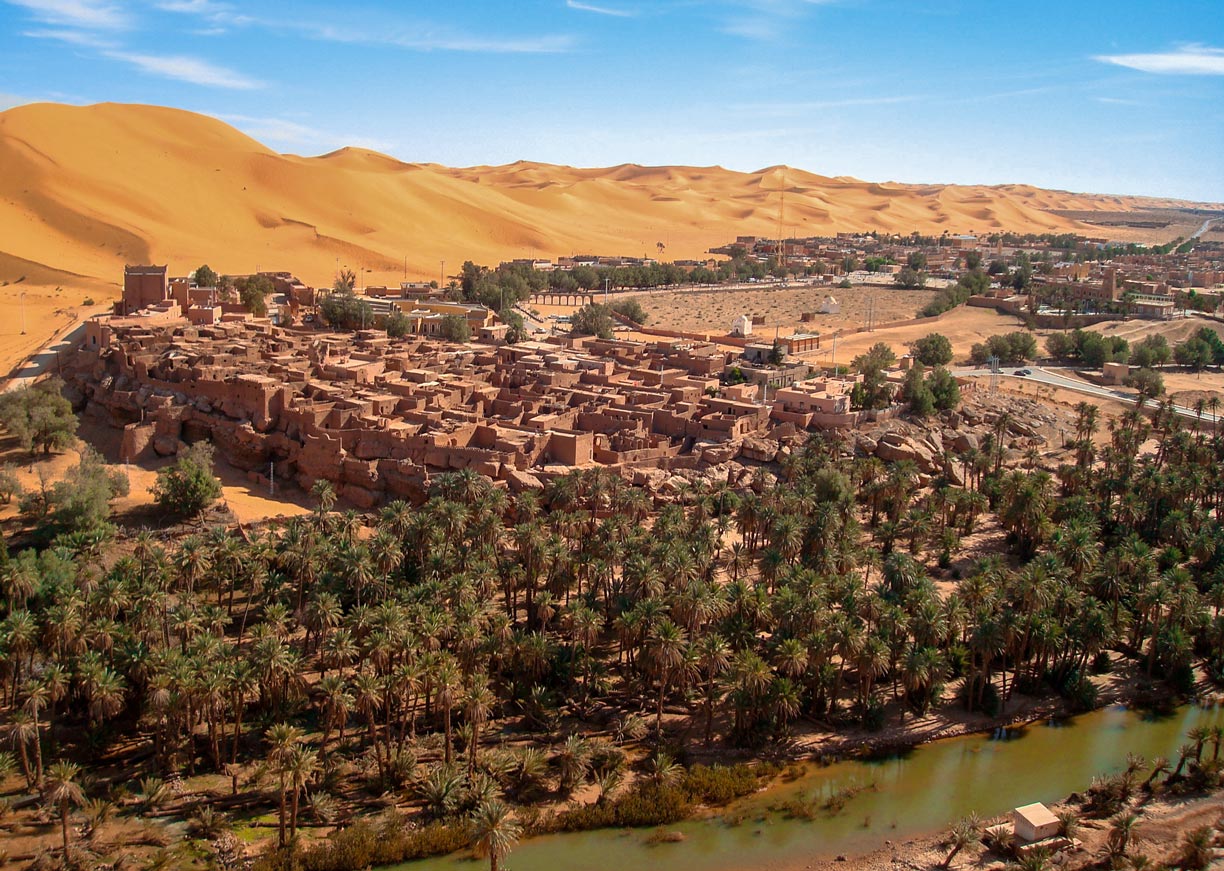 The old town of the Taghit oasis and surroundings in Algeria's Bechar Province.
Image: Mohamed.benguedda

More than four-fifths of Algeria lies in the central part of the Sahara Desert, the largest (hot) desert in the world, covering most of North Africa. The Sahara extends from the Atlantic Ocean in the west to the Red Sea in the east and the Mediterranean Sea in the north.

The Grand Ergs
To the south of the Sahara Atlas mountains are the vast areas of the "field of sand dunes," known as the Grand Erg Occidental (the Western Sand Sea) in the center of Algeria and the Grand Erg Oriental to the east. These natural desert regions receive almost no rainfall.

Ahaggar
Deep in the central Sahara, in southeastern Algeria is the country's highest peak, Mount Tahat, at 2,908 m (9,541 ft). The mountain is situated in the highland region of the Hoggar Mountains (Ahaggar)


People
Algeria's population consists of 99% Arab-Berbers. Although almost all Algerians are of Berber (not Arab) origin, only a minority identify themselves as primarily Berber, about 15% of the total population; these people live mainly in the mountainous region of Kabylie, east of Algiers and some other communities.

The state religion is Islam. The Berbers are also Muslims, but they identify more with their Berber than with their Arab cultural heritage.


Natural resources of Algeria
Algeria's natural resources include oil, natural gas, iron ore, phosphates, uranium, lead and zinc. The oil and gas sector is the backbone of the Algerian economy. The country has potential for solar and wind energy.


Natural hazards in Algeria
Parts of Algeria are prone to severe and dangerous flood damage, drought, landslides, and plagues of locusts. Northern Algeria is located in an earthquake zone on the boundary between the African and Eurasian plates, which can trigger earthquakes and tsunamis.

The map shows the location of the following Algerian cities, towns:

Political Map of the Mediterranean Region