The Gaberoun Oasis, the oasis in the Sahara with a large lake, is located in the Sabha district in the Fezzan region in southwestern Libya.
Image: Franzfoto

The map shows Libya, one of the five Maghreb countries in North Africa. Libya borders the Mediterranean Sea to the north; it shares borders with Algeria, Chad, Egypt, Niger, Sudan, and Tunisia and has maritime borders with Greece, Italy, and Malta.

An area of 1,759,540 km² makes Libya the fourth-largest country in Africa. It is about five times the size of Germany or about 2.5 times the size of Texas. Much of the country is covered by the Sahara Desert. The largest hot desert in the world covers most of the northern part of the African continent.

Libya has a population of 6.9 million people; the largest city and constitutional capital of Libya is Tripoli (Tarabulus). Spoken languages are Arabic (official), Teda and various Berber dialects (Amazigh and Kabyle). The majority of people in Libya are Muslims.

Due to ongoing conflicts between armed groups in the country, the elected parliament operates from its exile in the city of Tobruk (Tubruq) near the Egyptian border. The North African nation descended into chaos after supreme leader Muammar Gaddafi was toppled and killed in a NATO-backed uprising a decade ago. Since then, rival administrations in the east and west of the country have been fighting for power. 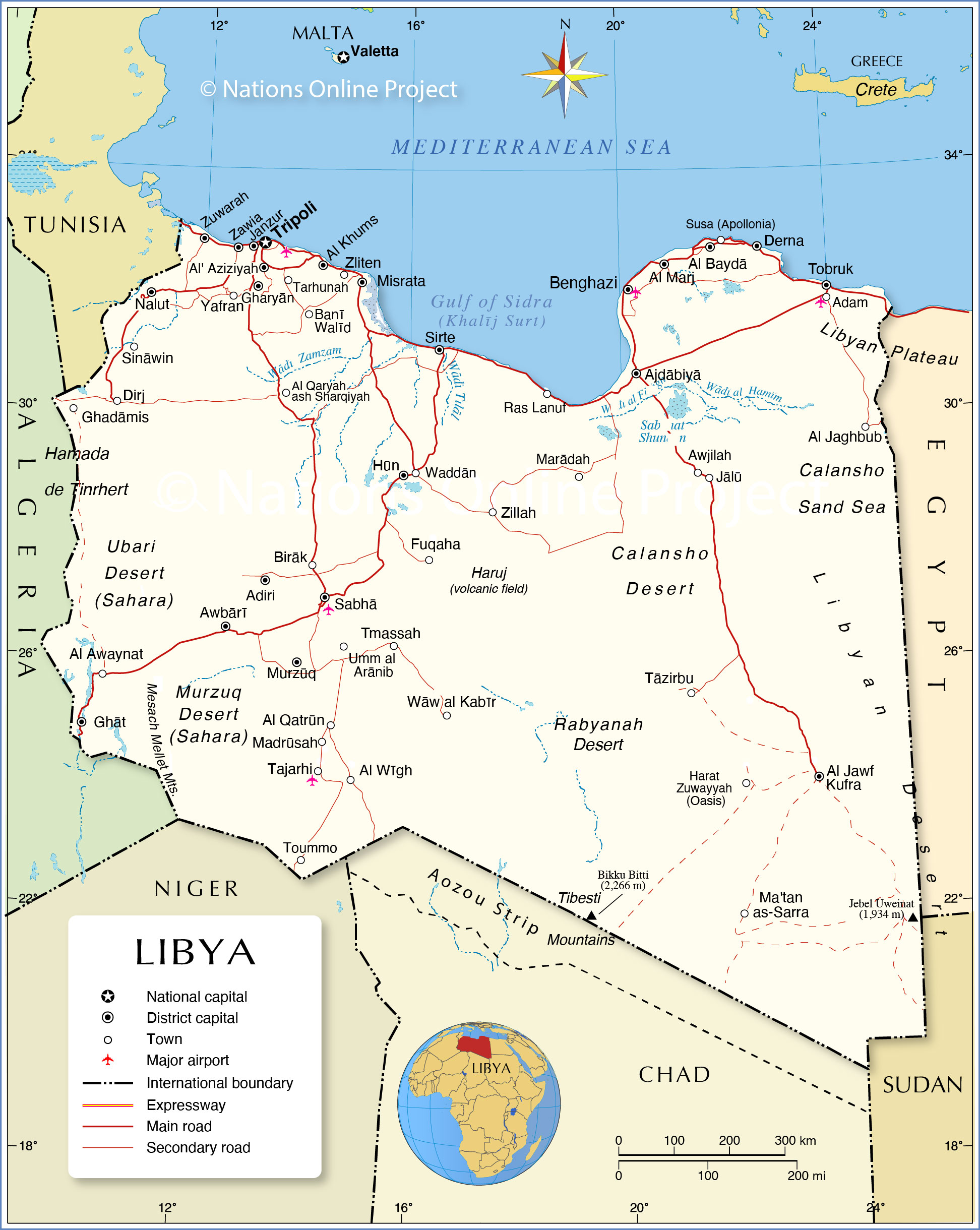 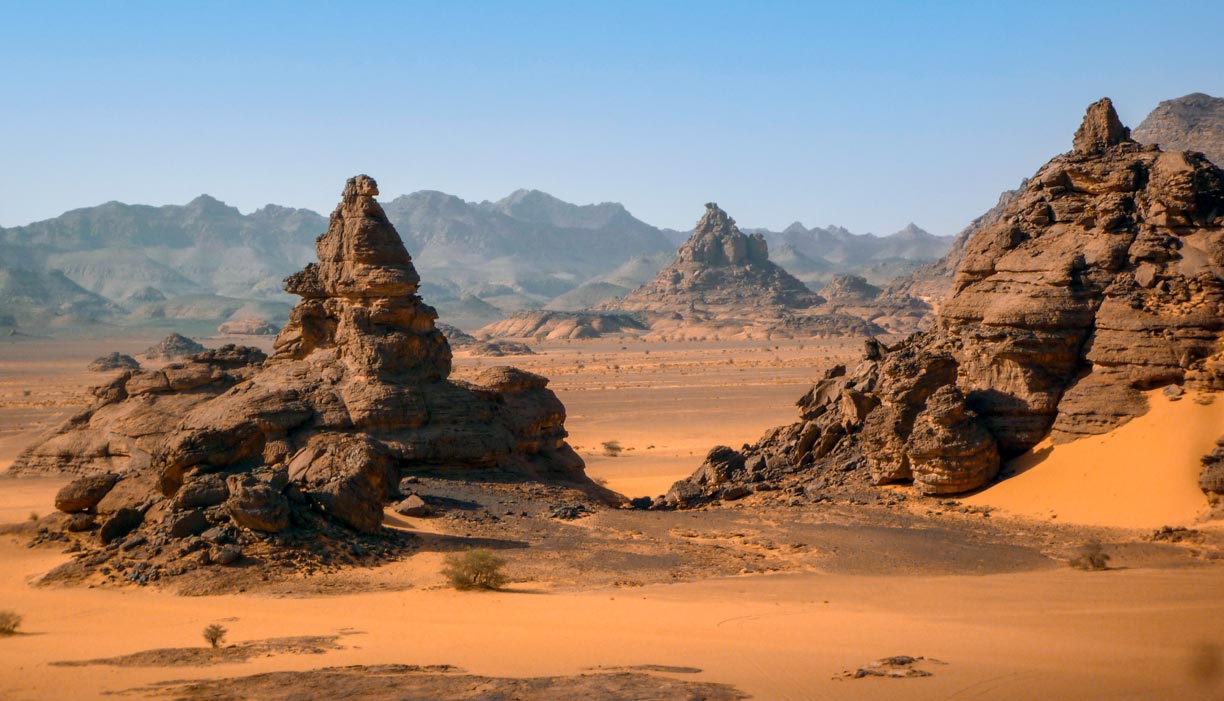 Rock formations in the Tadrart Akakus, a mountain range in southwestern Libya. It is located not far from the city of Ghat near the Idinen rock massif. A southern spur is the Tassili Tadrart.
Image: Franzfoto

Since 2007 the country is divided into twenty-two districts (shabiyah).

People
The inhabitants of Libya are predominantly Arab, with an estimated 10 % of the population being Berber (Amazigh and Kabyles). The people of Libya, about 75%, live mainly along the Mediterranean coast, where the country's urban areas are located.
The rest of the Libyan population lives in scattered oasis towns in the Sahara, the most important oases are Ghadames, Sabha and Kufra.


Cities
The largest city and designated capital is Tripoli; other large cities are Benghazi, a major seaport, Misrata, known as the trade capital of Libya, and Tobruk, the former waystation along the coastal caravan route is now the seat of the Libya interim government. 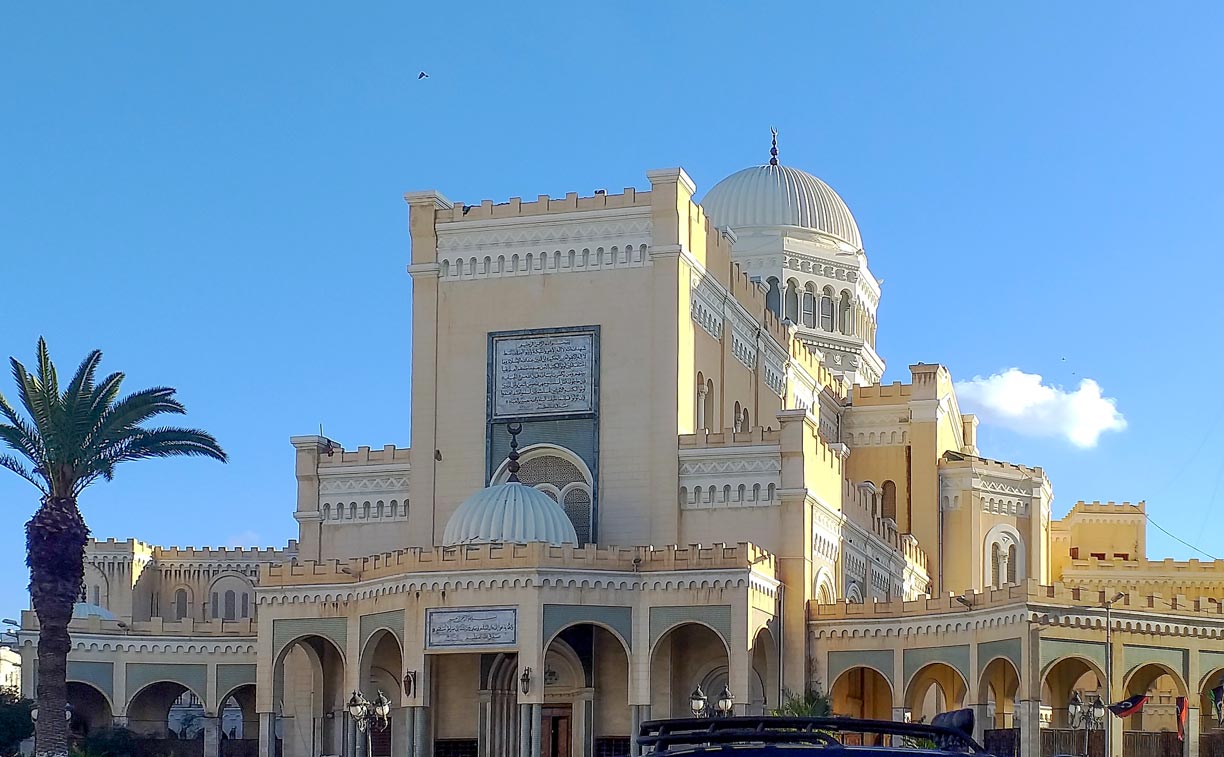 The Algeria Square Mosque, also known as Tripoli Cathedral, is located in the center of Tripoli, the capital of Libya. The building was converted into a mosque in 1970.
Photo: Ziad Fhema

Rivers
Libya is one of the few countries in the world where there are no permanent rivers, but wadis, river beds, which only carry water temporarily after heavy rainfall. However, there are huge freshwater reserves under the territory of Libya, trapped in aquifers, underground layers of water-bearing permeable rock.


Sahara
Libya has its share of the world's largest desert. The Libyan Desert covers much of eastern Libya; the desert extends into Egypt in the east. It is one of the Sahara's most arid and least populated regions. Within the desert lies the Calanshio Sand Sea, an extremely hostile landscape of more than 60,000 square kilometers covered by dunes up to 100 meters high.
The Sahara covers two large basins in the east, the Ghadamis Basin in the north with the Hamada de Tinrhert, a rocky desert, and two ergs (sand seas), the Idehan Ubari, a hyper-arid region further south, and the Murzuq Basin with the Idehan Murzuq (Murzuq Desert) to the south.

The map shows the location of the following Libyan cities and towns:

Searchable Map and Satellite View of the City of Tripoli

Searchable Map and Satellite View of the City of Benghazi