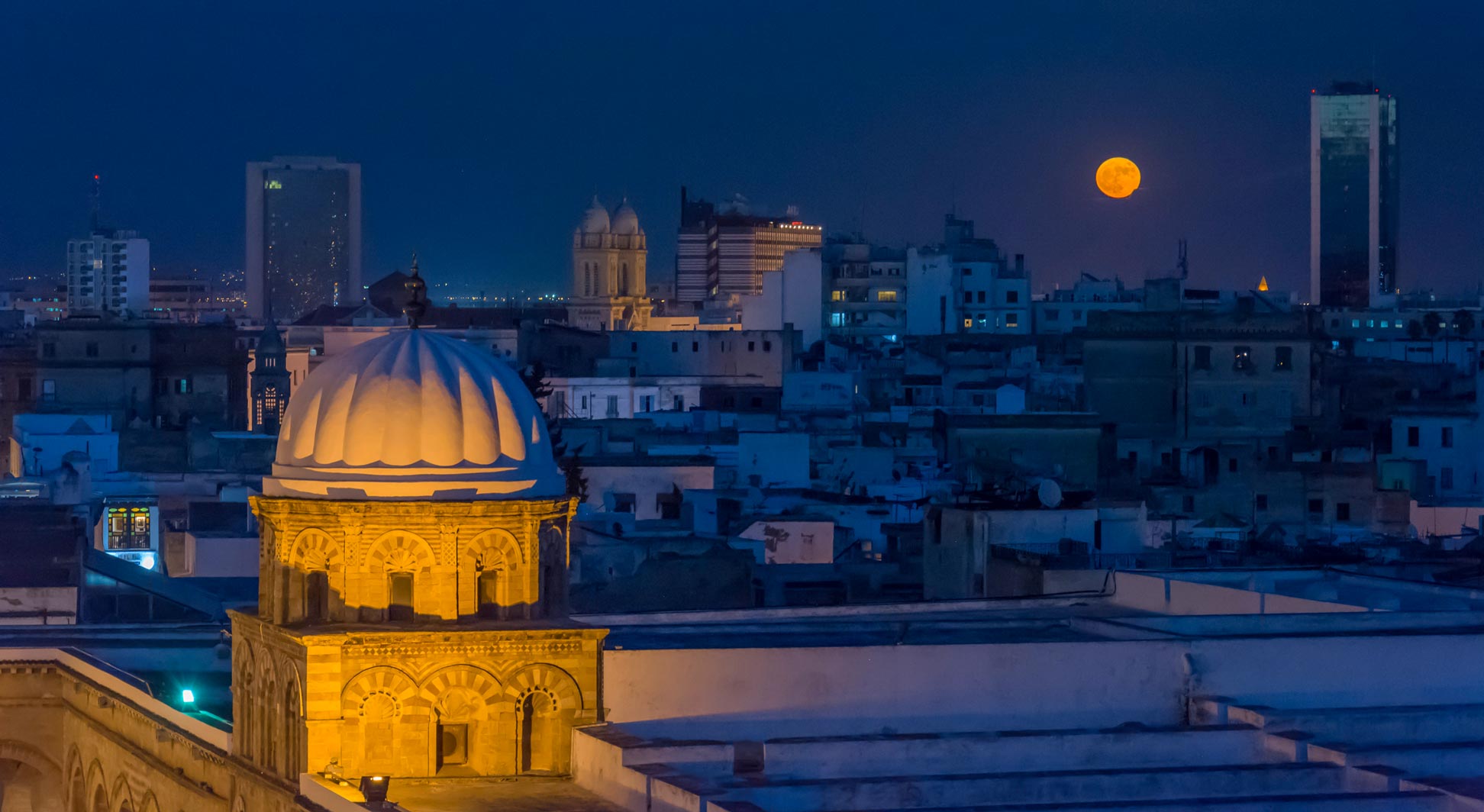 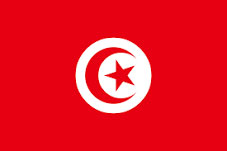 The map shows Tunisia, one of the five Maghreb countries in North Africa. Tunisia is situated between Algeria and Libya, bordering the Mediterranean Sea and extends south into the Sahara Desert. The country shares a maritime border with Italy.

Tunisia occupies an area of 163,610 km², making it the smallest country in Northern Africa; it is about two-thirds the size of the United Kingdom, or slightly larger than the US state of Georgia.

Tunisia has a population of 11.7 million people (in 2020); the capital, main port and largest city is Tunis. The vast majority of the population lives in the northern half of the country and along the east coast.
Spoken languages are Tunisian Arabic, Berber, French (in administration, commerce and education) and English (in tourism).
Official Religion is Islam.

Ten years ago, the Arab Spring began in Tunisia. After ousting a longtime autocrat from power in 2011, Tunisia started a democratic transition, and citizens now enjoy unprecedented political rights and civil liberties. [FH] 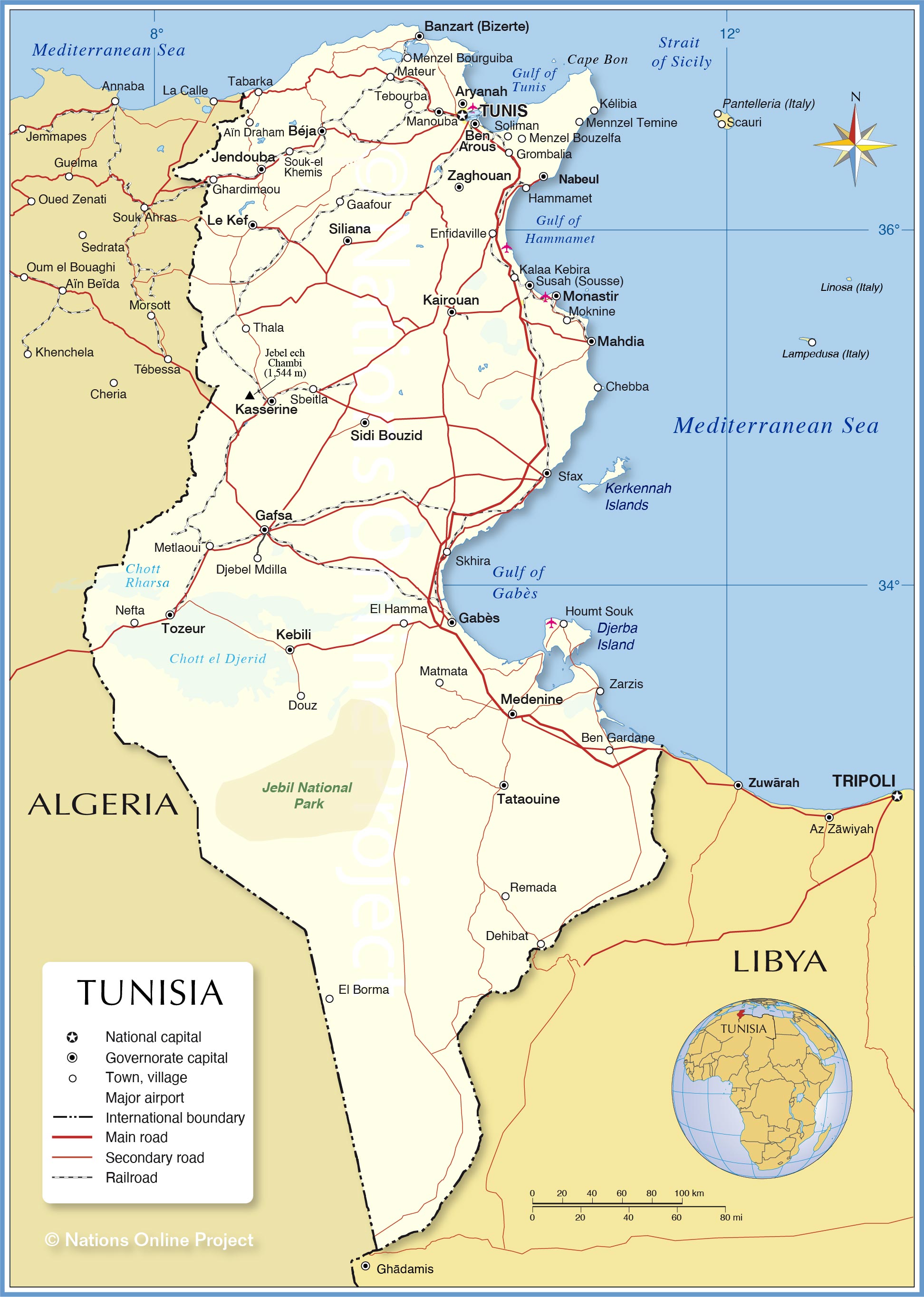 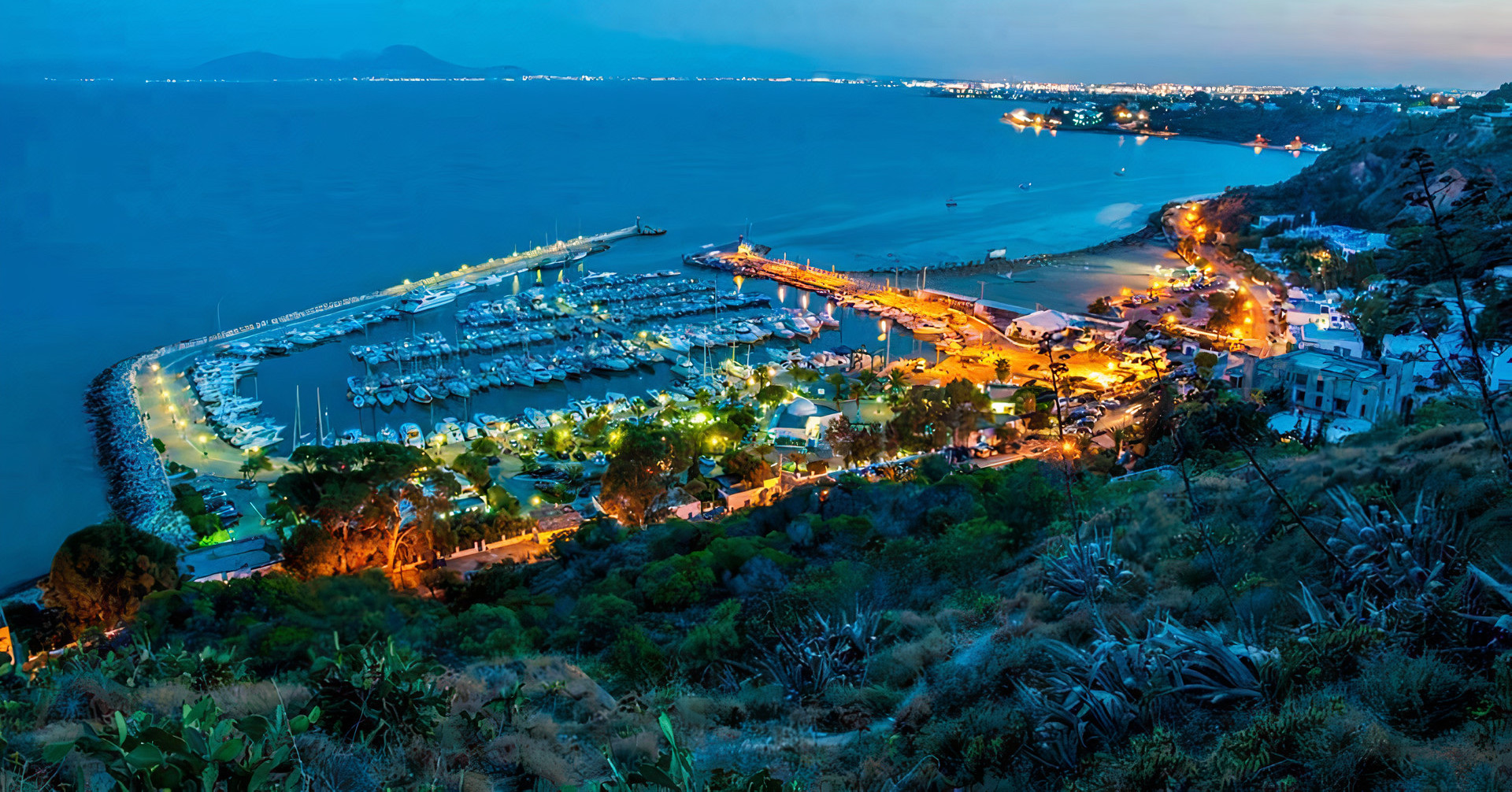 Sidi Bou Said is a tourist attraction in northern Tunisia, located just northeast of ancient Carthage, once the seat of the powerful Carthaginian (Punic) Empire. The town is known for its blue and white colored architecture.
Image: Nayrouzzz


Despite several terrorist incidents in Tunisia, the country has been a popular tourist destination since the early 1960s and is one of the most visited countries in Africa.

Tourism represents about 16% of Tunisia's GDP (in 2019) and is a major source of foreign currency.

The main attractions are the ancient city of Carthage near Tunis, and the famous Amphitheater of El Jem near Sousse.

The northernmost country of Africa is the smallest nation in the Maghreb. It borders the Mediterranean Sea to the north and east. 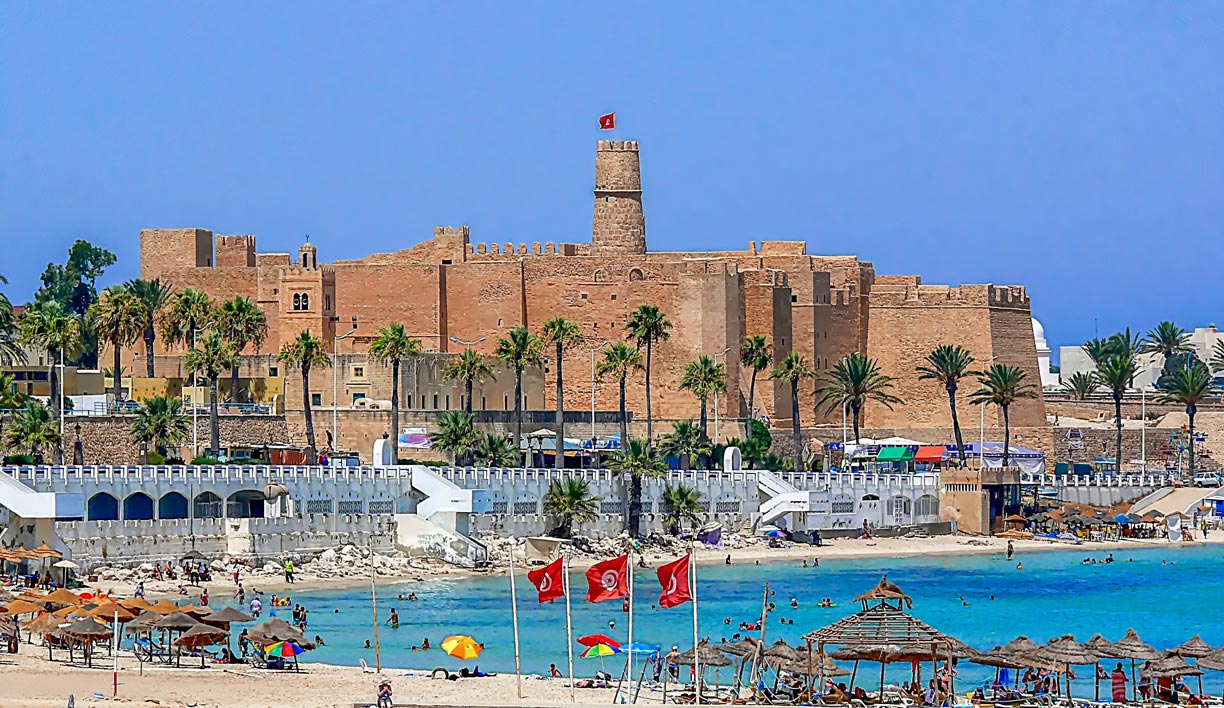 The Ribat of Monastir is the oldest ribat (an Arabic fortification) built by the Arab conquerors during the Muslim conquest of the Maghreb in the 8th century AD.
Image: Ad Meskens

In the east, along Tunisia's eastern Mediterranean coast, is a broad coastal plain, known as the Tunisian Sahel (Al-Sāḥil); the region extends south of the city of Hammamet along the Gulf of Hammamet to Mahdia and further south into the Sfax governorate. The Sahel is famous for its Olive and Almond cultivation.


Mountains
Tunisia's northern landscape is mountainous and dominated by several branches of the eastern Atlas Mountains, the hilly Tunisian Tell to the north, and the eastern portion of the Aurès Mountains, also known as the Tabassah Mountains, to the south.

The highest point in the country, with 1,544 m, is Jebel ech Chambi. The massif, part of the Aurès or Tabassah Mountains, is located about 14 km northwest of the city of Kasserine in west-central Tunisia near the border with Algeria. UNESCO designated Jebel ech Chambi as a biosphere reserve in 1977. 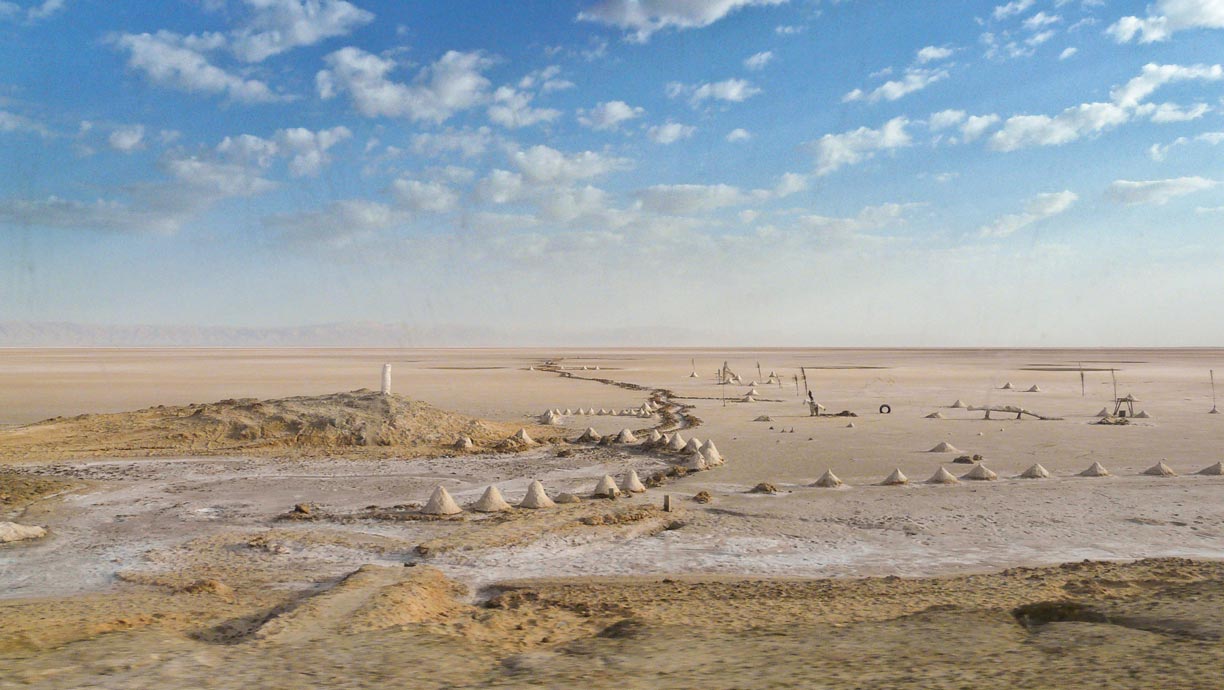 Small salt mounds in the Chott el Djerid, a salt lake in west-central Tunisia; it is the largest salt pan in the Sahara Desert.
Image: Daniel PERRIES


South of the mountains, the terrain slopes across a plateau to an endorheic basin with several salt lakes and scattered date palm oases.

The Chott el Djerid, a large salt lake in west-central Tunisia, is the largest salt pan in the Sahara Desert. To the south lies a hot and dry central plain, the semiarid area merges into the Sahara.

South of the salt lakes stretches the Grand Erg Oriental, the eastern part of the "Sea of Sand," an area of wind-formed dunes that cover much of east-central Algeria and the southwestern part of Tunisia.
The world's largest (hot) desert covers much of North Africa; it extends from the Atlantic Ocean in the west to the Mediterranean Sea in the north and the Red Sea in the east.

Douz, a town in a palm oasis in the Kebili Governorate in southern Tunisia, is the gateway to the desert.
Douz is known as the host of the annual International Festival of the Sahara. The Camel festival is a four-day celebration of traditional desert culture.

About 30 km south of the town is Tunisia's largest national park, the Jebil National Park, a vast barren desert landscape of the Sahara. The park can be visited on guided safari tours, but is more of a reserve to save the local population of Dorcas gazelle and Addax antelope from extinction than a tourist attraction.


Environmental issues in Tunisia
A major problem in North African countries is desertification and sand encroachment. Poor farming practices, such as overgrazing, deforestation, soil erosion, and a limited supply of natural freshwater sources, contribute to the problem. In Tunisia, other problems are added: dangerous pollutants are discharged into the sea, industrial pollution from phosphate refining has led to the ecological destruction of the sea at Chatt Essalam, Gabes. [DW]

The map shows the location of the following cities, towns:

Satellite View and Map of Tunis

Satellite View and Map of Tunisia