View of the Anboto ridge from the Alluitz summit in the Basque Mountains. With the Devil's mountain pass between the towns of Durango and Vitoria-Gasteiz in the center. Anboto, at 1331 m, is the highest peak of the Urkiola limestone mountain range, situated in the Basque Country in northeastern Spain.
Image: Txo

The shaded relief map shows the Iberian Peninsula, an almost continent-like peninsula at the southwestern tip of Europe. The peninsula, also known as Iberia, "the land of the Iberians," forms the western end of the Eurasian continent and is divided between the mainland territories of Spain and Portugal. Iberia also includes a small area of southern France, the tiny autonomous principality of Andorra, and the British overseas territory of Gibraltar.

Iberia has an area of 583.254 km²; it is about the size of Madagascar or slightly larger than twice the size of the US state of Nevada. The landmass is bounded by the Bay of Biscay (Atlantic) in the north, the Mediterranean Sea in the south and east, the Alboran Sea (a body of water of the Mediterranean Sea) and the Bay of Cádiz in the south, and the North Atlantic Ocean in the west.
Cabo da Roca in Portugal is the westernmost point of mainland Europe and the Eurasian mainland.

Iberia has a population of 52,3 million people. 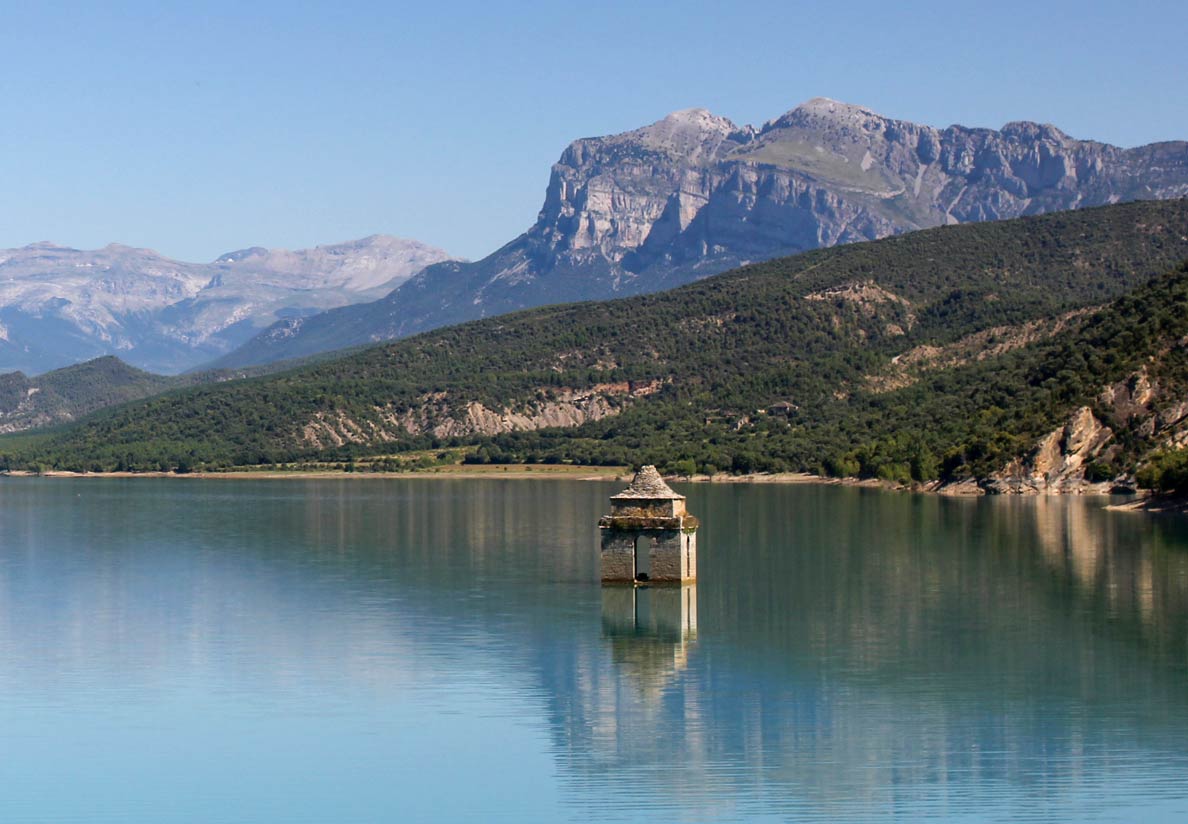 Church tower of the lost village of Mediano in the Embalse de Mediano, one of the largest reservoirs in northern Spain.
Image: Juan R. Lascorz


Iberia is separated from the rest of Europe by the Pyrenees, a mountain chain older than the Alps, with several three-thousanders.

For many hundred years, the Pyrenees represented a 450 km (280 mi) long and up to 90 km (56 mi) wide substantial barrier between the peninsula and the European mainland and were difficult to pass. One of the reasons why Spain and Portugal became seafaring nations.

At the western end, the Pyrenees merge with the Basque and Cantabrian Mountains.
The area along the northern Atlantic coast of Iberia, with the regions of Galicia and the northern parts of Asturias, Cantabria and the Basque Country, is known as Green Spain because of its humid and temperate oceanic climate, which favors the growth of pastures and forests.

The center of the Iberian Peninsula is dominated by a vast high plateau, the Meseta Central, with elevations from 600 to 760 m, which slopes gently to the west. In the center of the Meseta towers the Sistema Central, a system of mountain ranges, most prominent are the Serra de Estrela, the Sierra de Guadarrama, and the Sierra de Gredos.
The highest mountain on the peninsula is Mount Mulhacén, with 3,478 m, located in the Andalusian Sierra Nevada.


Map of the Iberian Peninsula 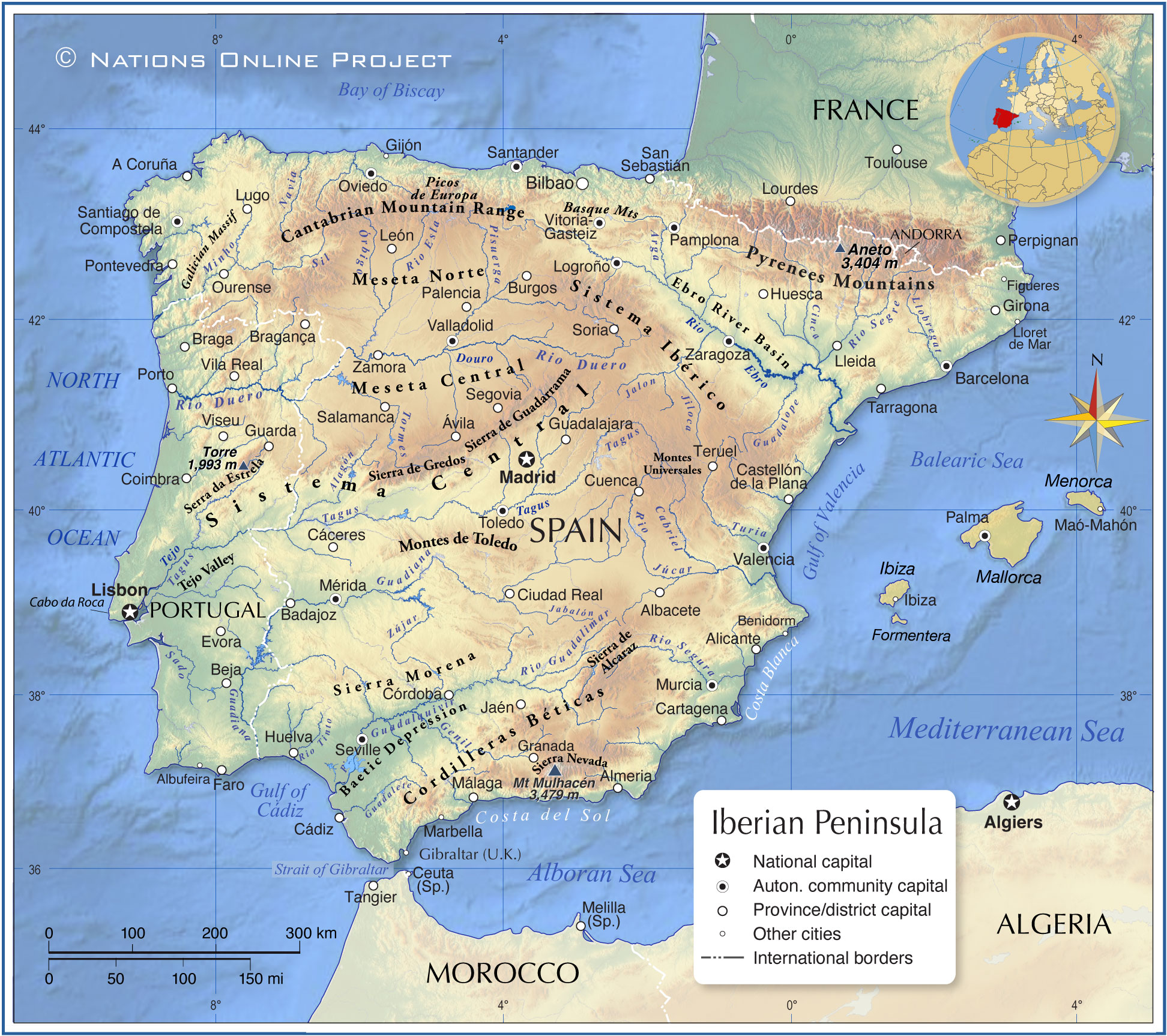 Physical Map of the Iberian Peninsula

The map shows the shaded relief of the Iberian Peninsula and surrounding waters with international borders, national capitals, and major geographical features like rivers and mountain ranges.

More about the Iberian Peninsula 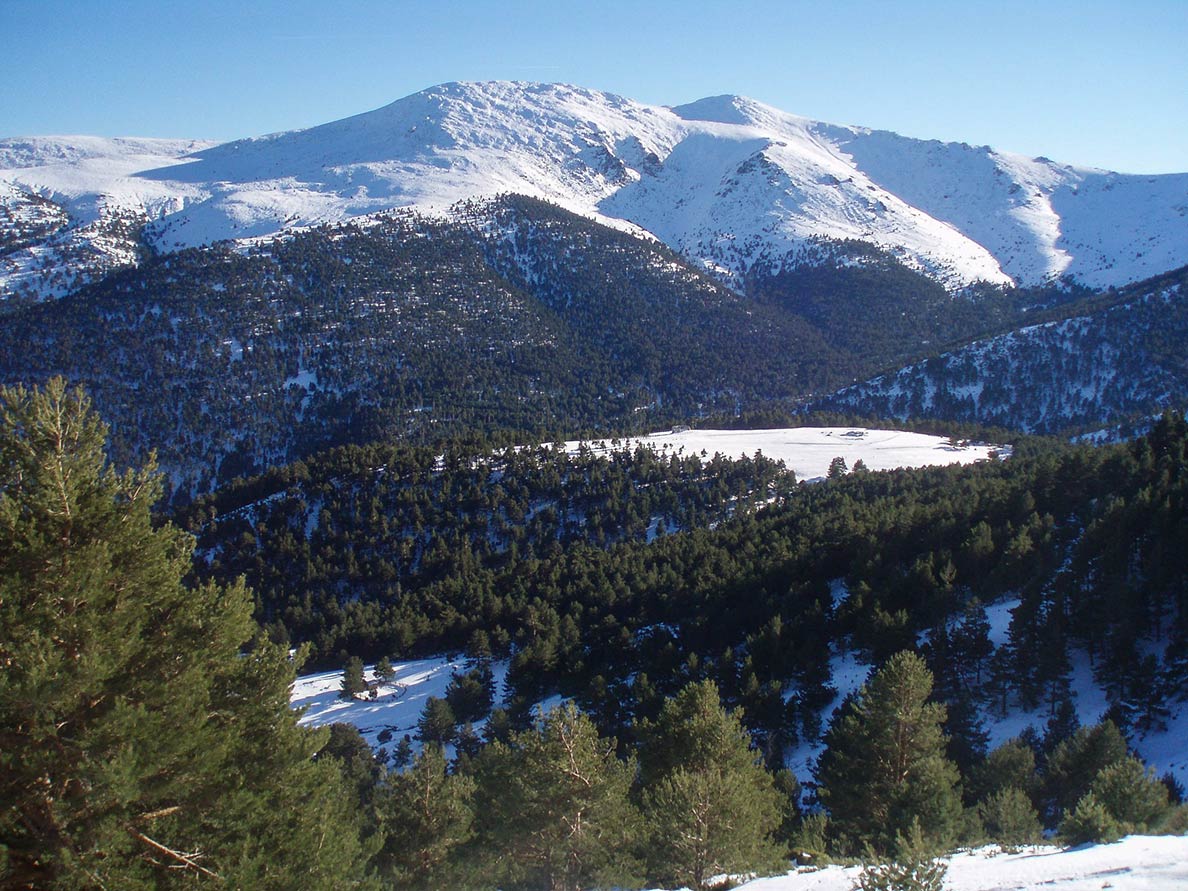 North face of Cabezas de Hierro to the southeast of Segovia in the Guadarrama mountain range of the Sistema Central.
Image: Miguel303xm


Cordillera Cantábrica
The Cantabrian Mountains are a mountain range in northern Spain. They are the western extension of the Pyrenees and run for 480 km through the autonomous regions of Navarre, Basque Country, Cantabria, Castile-Leon, Asturias, and Galicia. The highest peaks of the Cantabrian Mountains are located in the central Picos de Europa range, whose highest mountain is the Torre de Cerredo, at 2648 meters.

Sistema Ibérico
The Iberian System is a cluster of high and rugged mountain massifs that forms the eastern edge of the central tableland; it is the main watershed of the Iberian Peninsula between the Atlantic Ocean and the Mediterranean Sea.

Sistema Central
The Central System is a mountain system in the center of the Iberian Peninsula. The highest summit of the Sistema Central is Pico Almanzor at 2,592 m. Major mountain ranges within the system are the Sierra de Guadarrama, the Sierra de Gredos in Spain and the Serra da Estrela in Portugal.

Sierra Morena
The Sierra Morena is a low mountain range with an average height of 800 to 1000 m.

Cordilleras Béticas
The Baetic System is a mountain range that stretches 600 km from the Bay of Cadiz in the south of Spain to far beyond Andalusia in the Valencia region. 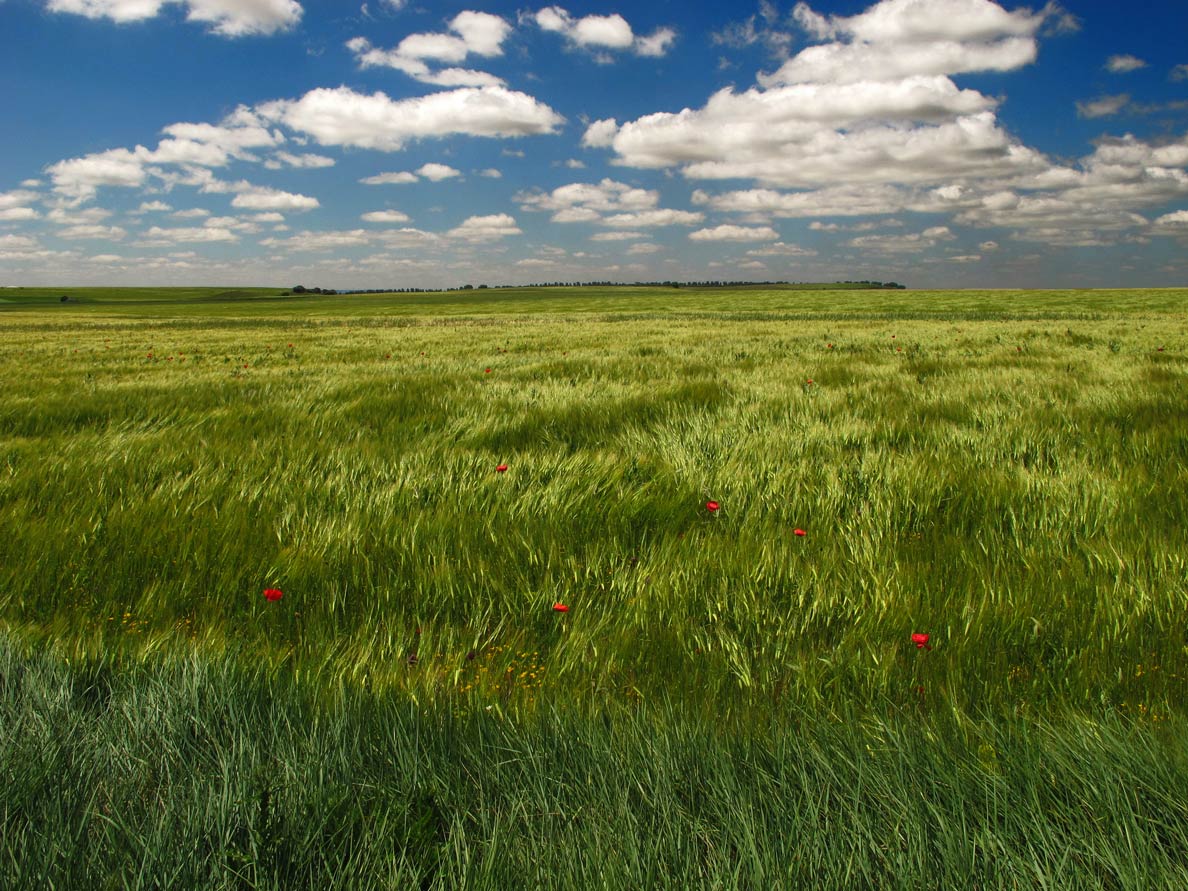 
The great Central Plateau is a vast elevated area in the interior of the Iberian Peninsula that is surrounded by mountainous massifs, which shape and separate the Meseta from the rest of the territory.
The mountain ranges that border the plateau are (clockwise) the Galician Massif, the Cantabrian Mountains, the Basque Mountains (Montes vascos), the Iberian System, the Betic Systems, and the Sierra Morena. In the center of the Meseta is the Sistema Central mountain range. The plateau covers an area of over 210,000 km² and has an average elevation of 660 m.

Meseta Norte
The Northern Plateau is the northern part of the Spanish Central Plateau (Meseta Central), located to the north of the Central system. It covers much of the Duero river basin and the autonomous community of Castile and Leon.

Major Rivers
The Tagus/Tejo River is the longest river on the Iberian Peninsula. The river rises in the Montes Universales; and flows westward for 1,007 km before emptying into the Atlantic Ocean at Lisbon, the capital of Portugal.

The Guadalquivir, which rises in the Montes Universales, is the second-longest river flowing entirely in Spain and the only major navigable river in the country. 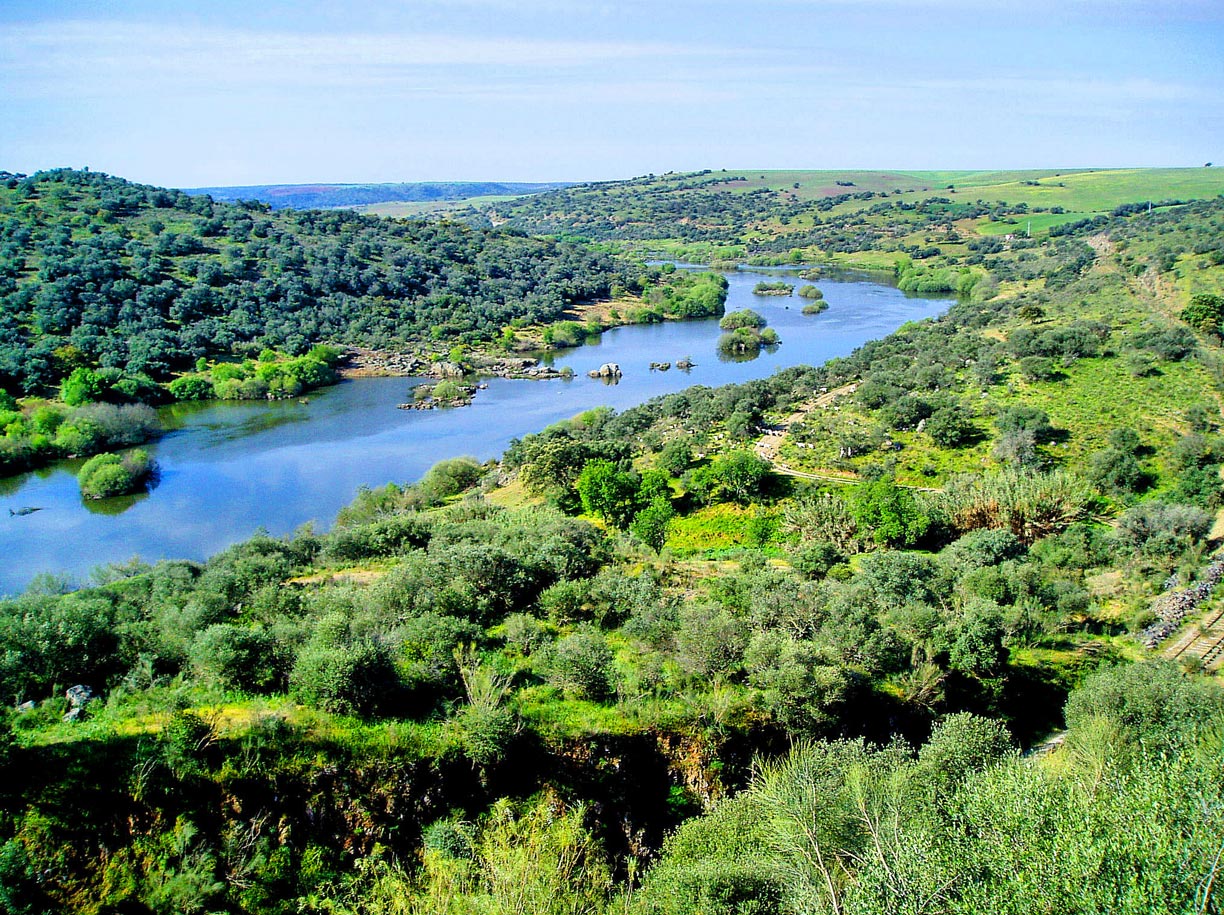 The Guadiana, one of the main rivers of the Iberian Peninsula, near Serpa in Portugal, after being dammed by the Alqueva and Pedrogão dams.
Image: Francisco Antunes


The Douro, the Iberian Peninsula's most water-rich river, rises in the Picos de Urbión (Sistema Ibérico) northwest of Soria; it then flows mainly west through the northwestern part of Spain and northern Portugal, emptying into the Atlantic Ocean at the Portuguese city of Porto.

The Ebro rises in Cantabria in northern Spain and flows from there 930 km in an east-southeast direction. At its mouth, it forms a delta and flows into the Mediterranean Sea.

The 830 km long Guadiana River rises in the Castilla-La Mancha region. It flows from east to west, then south, marking two sections of the border between Portugal and Spain before draining into the Gulf of Cadiz.


The map shows the following rivers of the Iberian Peninsula.

More about the Iberian Peninsula