Map of the Dominican Republic 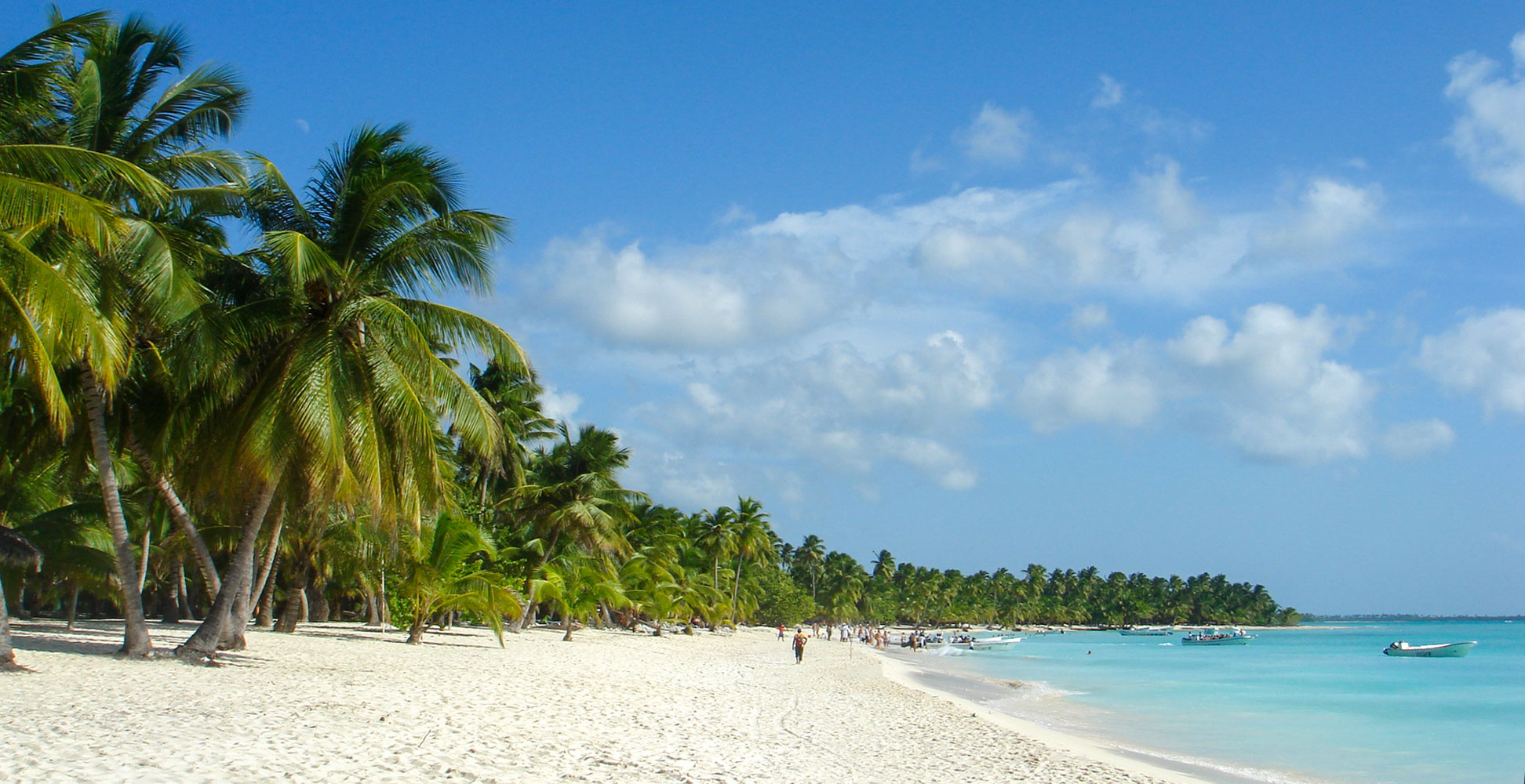 The palm-fringed beach of Isla Saona. The Dominican Republic's largest offshore island is 25 km long and 5 km wide. The almost uninhabited tropical island is part of the National Park of the East and a popular destination for excursions.
Image: Daniel

About the Dominican Republic 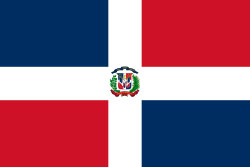 The map shows the Dominican Republic, the tropical country that occupies the eastern part of Hispaniola, an island in the Greater Antilles in the Caribbean Sea. The island is located 90 km (57 mi) southeast of Cuba, separated by the Windward Passage (Spanish: Paso de los Vientos). The 130 km (80 mi) wide Mona Passage (another strait) separates Hispaniola from Puerto Rico to the east.
Santo Domingo, the country's capital, is about 1,330 km (830 mi) from Miami, Florida.

With an area of 48,310 km², the Dominican Republic is slightly smaller than Slovakia or about the size of the US states of Vermont and New Hampshire combined.

10.7 million people live in the island nation (in 2022). Santo Domingo is the capital of the Dominican Republic and the largest urban agglomeration in the Caribbean and Central America. The spoken language is (Dominican) Spanish. The main religion is Christianity (68% of the population).

Map of the Dominican Republic 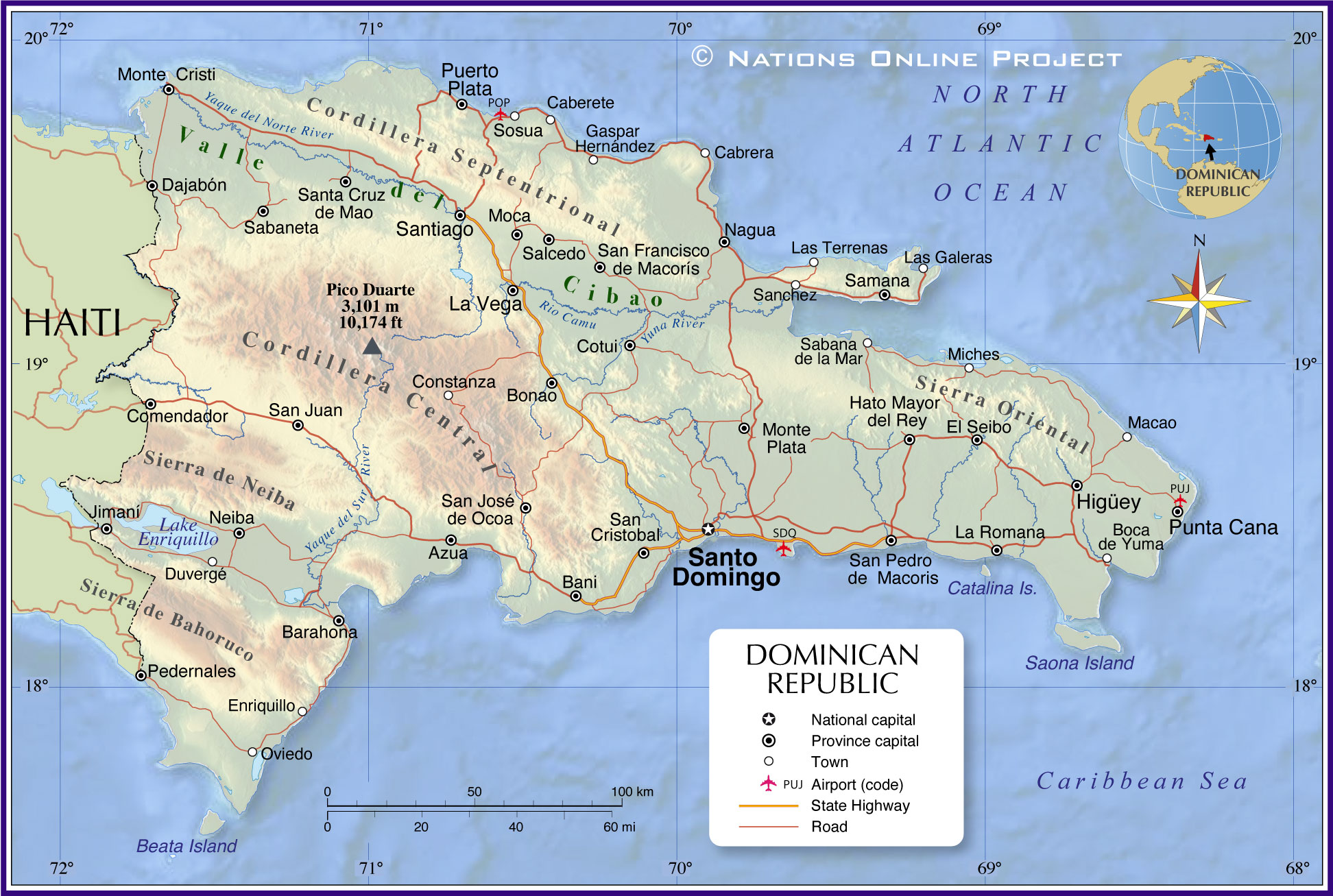 Political Map of the Dominican Republic

More about the Dominican Republic 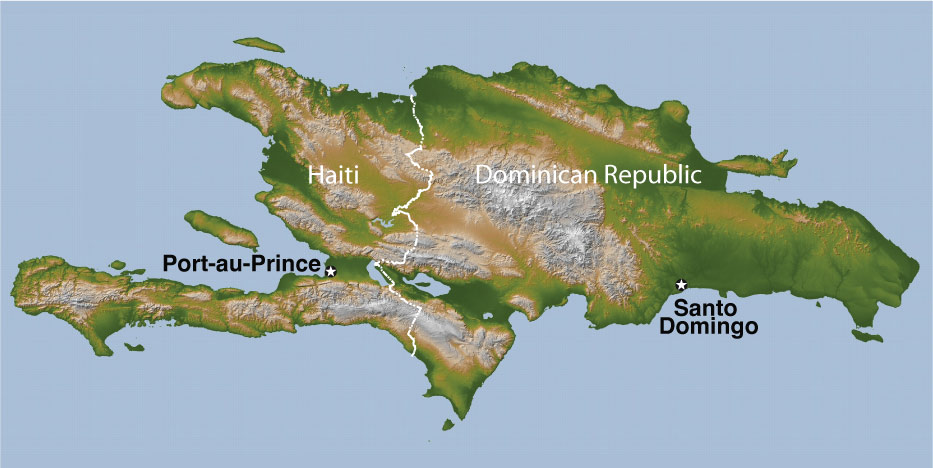 The Island of Hispaniola is shared by two countries, Haiti and the Dominican Republic.
Image: NASA/Nationsonline.org
Geography of the Dominican Republic
As mentioned above, the Dominican Republic is an island country in the Caribbean that offers white sand beaches on turquoise waters and mostly blue-white skies, evergreen highland forests, lush vegetation in fertile valleys and even a desert zone with dune formations on the Las Calderas peninsula (Las Dunas De Bani).


Mountains
Several of the highest mountains in the Caribbean are on the island of Hispaniola, with Pico Duarte being the highest at 3,101 m (10,174 ft), followed by Loma La Pelona at 3,094 m (10,151 ft) and Loma La Rucilla at 3,038 m (9,967 ft), three peaks close to each other in the Cordillera Central, the mountain range that dominates the western part of the Dominican Republic. [oj]
Major mountain ranges in the Dominican Republic are Cordillera Septentrional (the "Northern Range"), the Cordillera Central, the mountain massif that dominates the island's center, Sierra de Neiba, Sierra de Bahoruco and the Sierra Oriental in the northeast.


Rivers
Five originate in the Cordillera Central, and a sixth in the Sierra de Yamasá. The longest rivers in the republic are the Yaque Del Norte, the longest river in the country, followed by the Yuna River and the Yaque del Sur River. Other major rivers are Higuamo, La Isabela, Ozama, and Soco.

The Caribbean island is located in the Atlantic hurricane belt and can be hit by tropical cyclones and major hurricanes during the storm season from June to November.
It is prone to other natural disasters such as earthquakes, droughts, floods, landslides, heat waves, rainstorms and tsunamis. Hispaniola sits on the boundary of the North American/Caribbean tectonic plates. In 2010 a magnitude seven earthquake killed more than 220,000 people in Haiti. 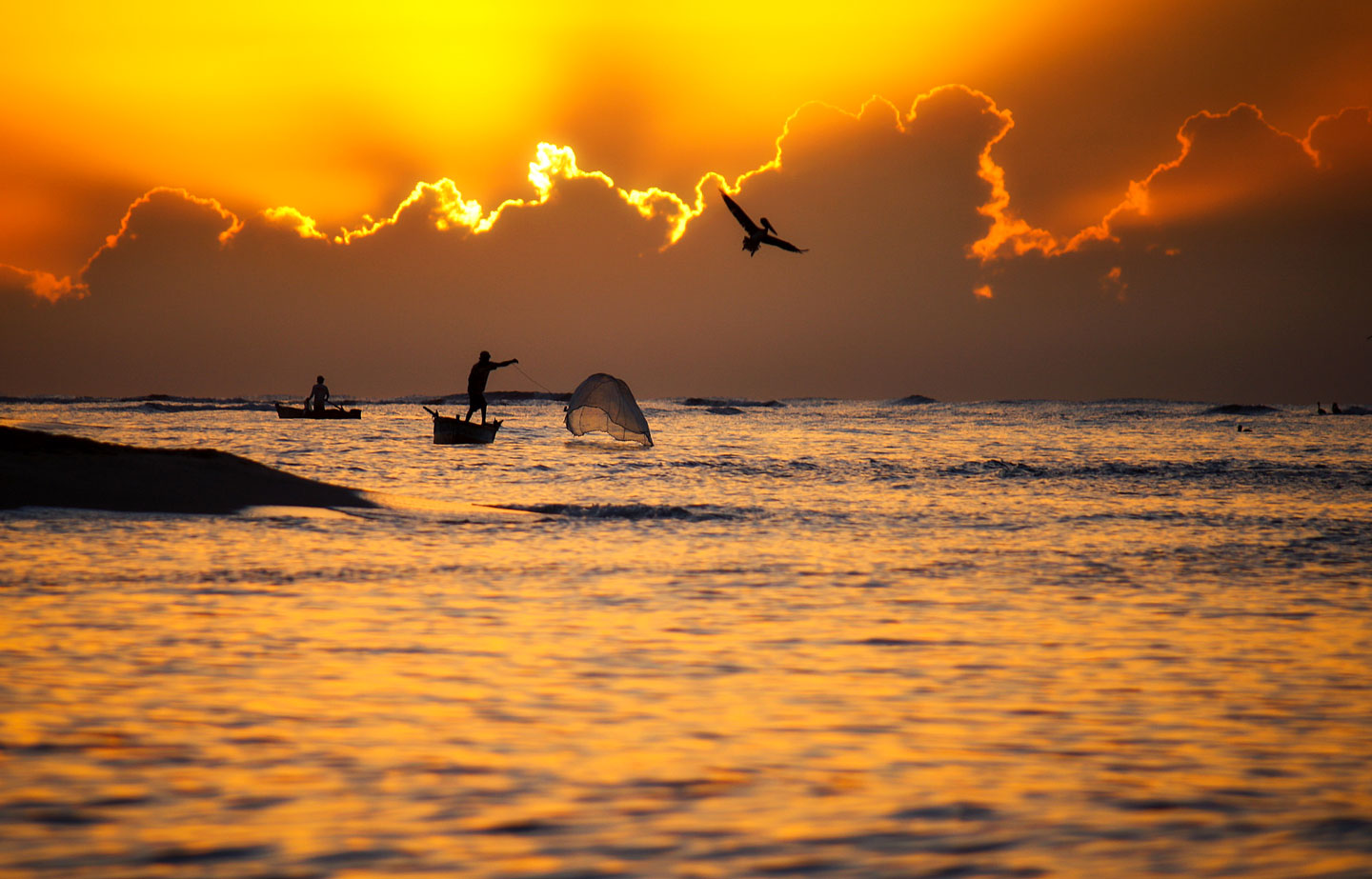 Fishermen at work with pelicans waiting for some scraps.
Image: Michael Matti


Hispaniola is, after Cuba, the second largest island of the Greater Antilles, a chain of islands in the Caribbean Sea. With an area of 76,192 km² (29,418 sq mi), the island is about half the size of the US state of Georgia or somewhat smaller than the Czech Republic.

After the discovery by Columbus in 1492, Hispaniola was colonized by the Spanish. With the Treaty of Rijswijk (1697), the Spanish had to cede the western part (present-day Haiti) to France and recognize French control of the western portion of Hispaniola, which was then known as Saint-Domingue.

Even today, the two nations share the island, but they could not be more different. To the west lies the ungovernable, politically and socially unstable and impoverished Haiti, a former French colony, and to the east is the relatively stable and prosperous Dominican Republic, a former Spanish colony (the Spanish Captaincy General of Santo Domingo) and today a popular tourist destination.
Both countries have around 10 million inhabitants, but the difference could not be greater. French-speaking Haiti and the Spanish-speaking Dominican Republic are two nations trapped by historical circumstances on the small Caribbean island. They share common historical experiences, including a colonial past, slavery-based economies, occupation, and autocratic regimes. 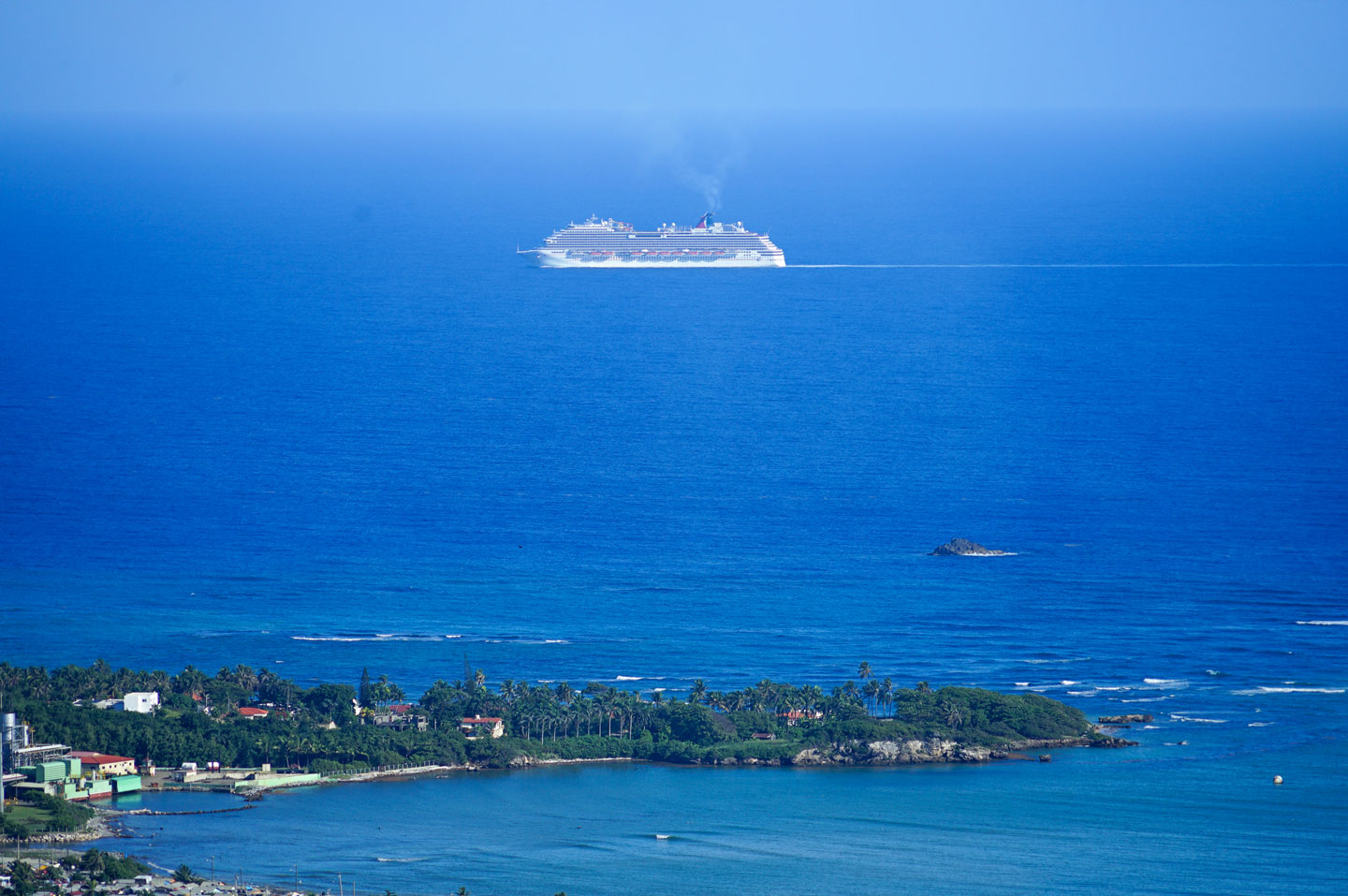 
Historically, the Spanish Captaincy was the first colony established by Spain in the New World in 1492 and served as the logistical base for the conquest of most of the Western Hemisphere. [LOC]
After decades of fighting, the Spanish had to cede the western part of the island to the French in 1697, who established Saint-Domingue there. It became the most productive colony in the Western Hemisphere with a labor-intensive sugar industry - for which the French imported large numbers of enslaved Africans. [LOC]

The foreign policy of the Dominican government towards Haiti is in apparent contradiction to its domestic policies toward Haitian citizens living in the Dominican Republic. While Haitian migrants in the Dominican Republic are the subject of discrimination, frequent violations of their human rights, and deportation, foreign relations with Haiti are non-confrontational and sometimes even cordial. [Dr. E. Sagas] [VOX] 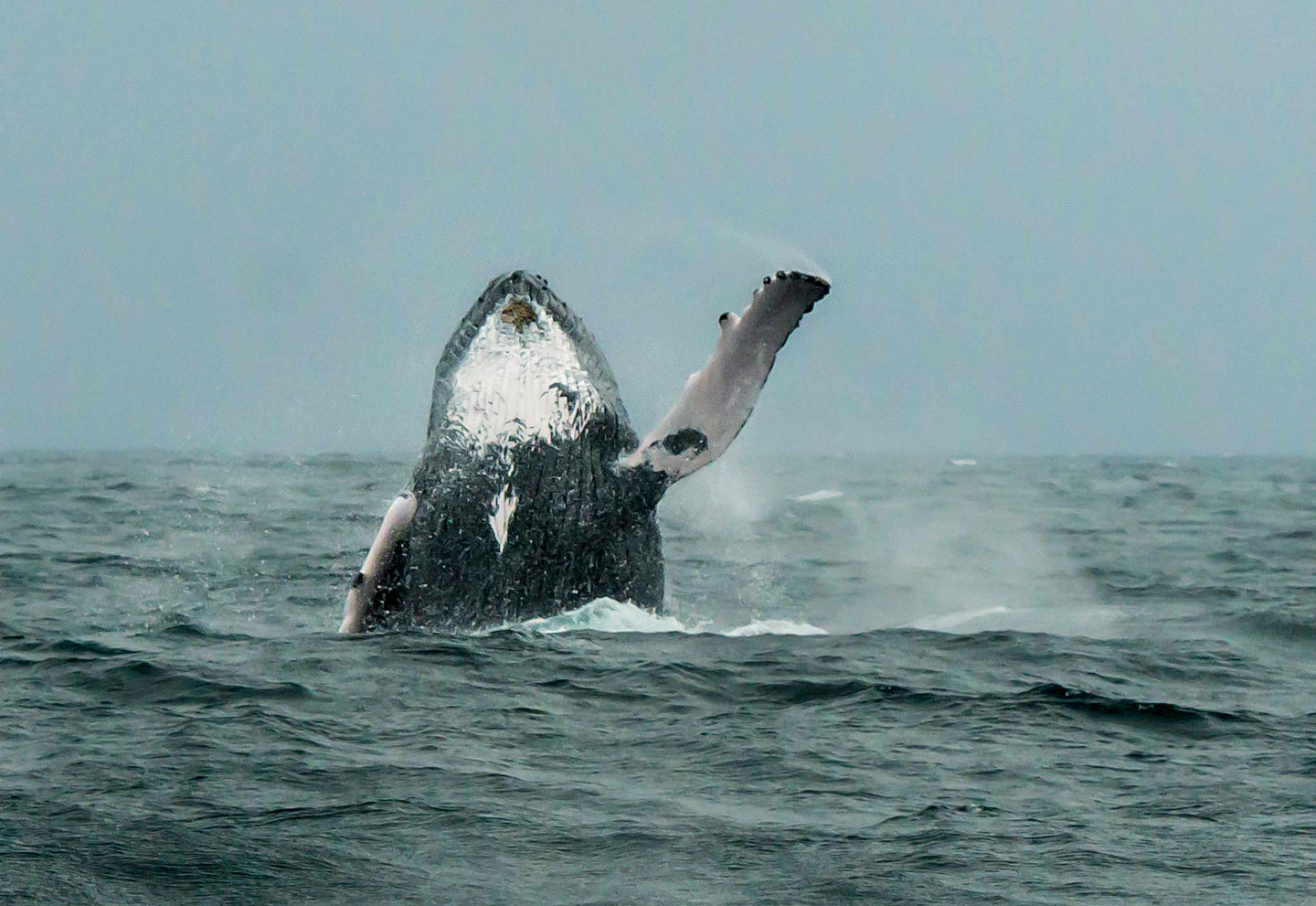 
The Caribbean is a tropical region in the western part of the North Atlantic Ocean north of the equator. The island chains of the Greater Antilles and the Lesser Antilles are located southeast of the Gulf of Mexico and the US mainland, to the east of Central America and north of the South American continent.

Geopolitically, the Caribbean (the West Indies) is considered a region of North America, sometimes as part of Central America or a region of its own.

The Greater Antilles is the constellation of the large islands in the Caribbean Sea: Cuba, Hispaniola, Puerto Rico, Jamaica and the much smaller Cayman Islands.

Six island countries share the Greater Antilles, the four independent states of Cuba, Haiti, the Dominican Republic and Jamaica and the two dependent territories of the Cayman Islands, a British Overseas Territory, and Puerto Rico, an unincorporated territory of the United States.

The map shows the Dominican Republic with the location of the following cities and towns (official names in parentheses):

More about the Dominican Republic

Searchable map and satellite view of the Dominican Republic