Tripura State Museum in Agartala, Tripura, India. The museum is housed in the Ujjayanta Palace, a former royal palace from the time when Tripura still was a princely state.
Image: Sharada Prasad CS 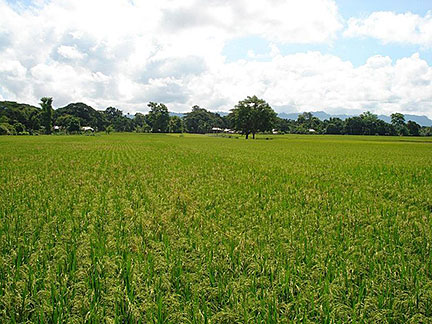 Rice is an important crop in the state of Tripura.
Image: Alokesh Debnath

Satellite view and map of Tripura. The third smallest Indian state is located in North-East India. It is surrounded by the nation of Bangladesh in the north, south, and west; it also borders the Indian states of Assam and Mizoram in the east.


The former ancient Hindu kingdom acceded to the Dominion of India after independence in 1947. It achieved full status as a state in 1972.

Tripura covers an area of 10,492 km² (4,051 sq mi), compared this is about four times the size of Luxembourg or about half the size of the US state of New Jersey. Hill ranges and valleys, extending roughly parallel in a north-south direction define the landscape of the state.

Tripura has a population of about 4 million inhabitants (in 2018). The largest city and capital is Agartala. The city is situated on the Haora River, about 80 km east of Dhaka, the capital of Bangladesh.

Spoken languages are Bengali and Kokborok (the language of the Borok people), both official. Hinduism is the main religion in the state (83%).