Hooghly River at Kolkata, the river is traditionally called 'Ganga' (Ganges), it is one of many tributaries of the Ganges. Vidyasagar Setu, also known as Second Hooghly Bridge in the background, the bridge links the cities of Kolkata (previously known as Calcutta) and Howrah.
Image: MonomoyDas


Destination India, a Nations Online country profile on the vast nation in South and Central Asia that occupies most of the Indian subcontinent.
The country borders the Himalayas in the north, the Arabian Sea in the west, the Bay of Bengal in the east, and the Laccadive Sea in the south. India shares borders with Bangladesh, Bhutan, Myanmar (Burma), China (Xizang - Tibet Autonomous Region), Nepal, and Pakistan, and it shares maritime borders with Indonesia, the Maldives, Sri Lanka, and Thailand.

India is the second-most populous country in the world (after China), with an estimated population of 1.37 billion people (in 2020). The country is subdivided into 29 states and seven Union Territories.

Capital and largest urban area of India is (New) Delhi; the second largest city is Mumbai. The official languages are Hindi-Urdu and English (the Indian Constitution lists 22 recognized languages).

The Indus Valley civilization, one of the oldest in the world, goes back at least 5,000 years.
Arab incursions starting in the 8th century and Turkish in the 12th were followed by European traders beginning in the late 15th century. By the 19th century, Britain had assumed political control of virtually all Indian lands.

Nonviolent resistance to British colonialism under Mohandas GANDHI and Jawaharlal NEHRU led to India's independence in 1947.

The subcontinent was divided into the secular state of India and the smaller Muslim state of Pakistan. A third war between the two countries in 1971 resulted in East Pakistan becoming the separate nation of Bangladesh.

Fundamental concerns in India include the ongoing dispute with Pakistan over Kashmir, massive overpopulation, environmental degradation, extensive poverty, and ethnic strife, all this despite impressive gains in economic investment and output.
(Source: CIA - The World Factbook)

Climate: Varies from tropical monsoon in south to temperate in north. 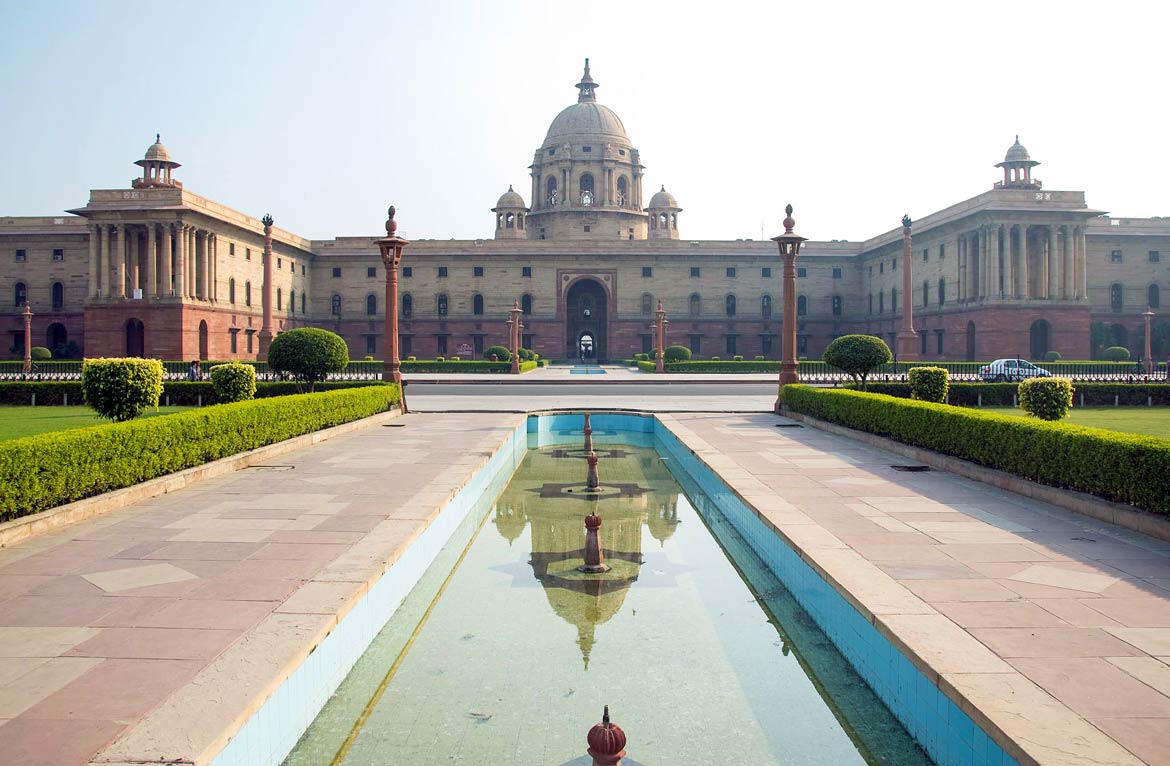 National Portal of India
The web presence of the Government of India.

The President of India
Official website of India's President.

GOI-Directory
Directory of official web sites of the Government of India. 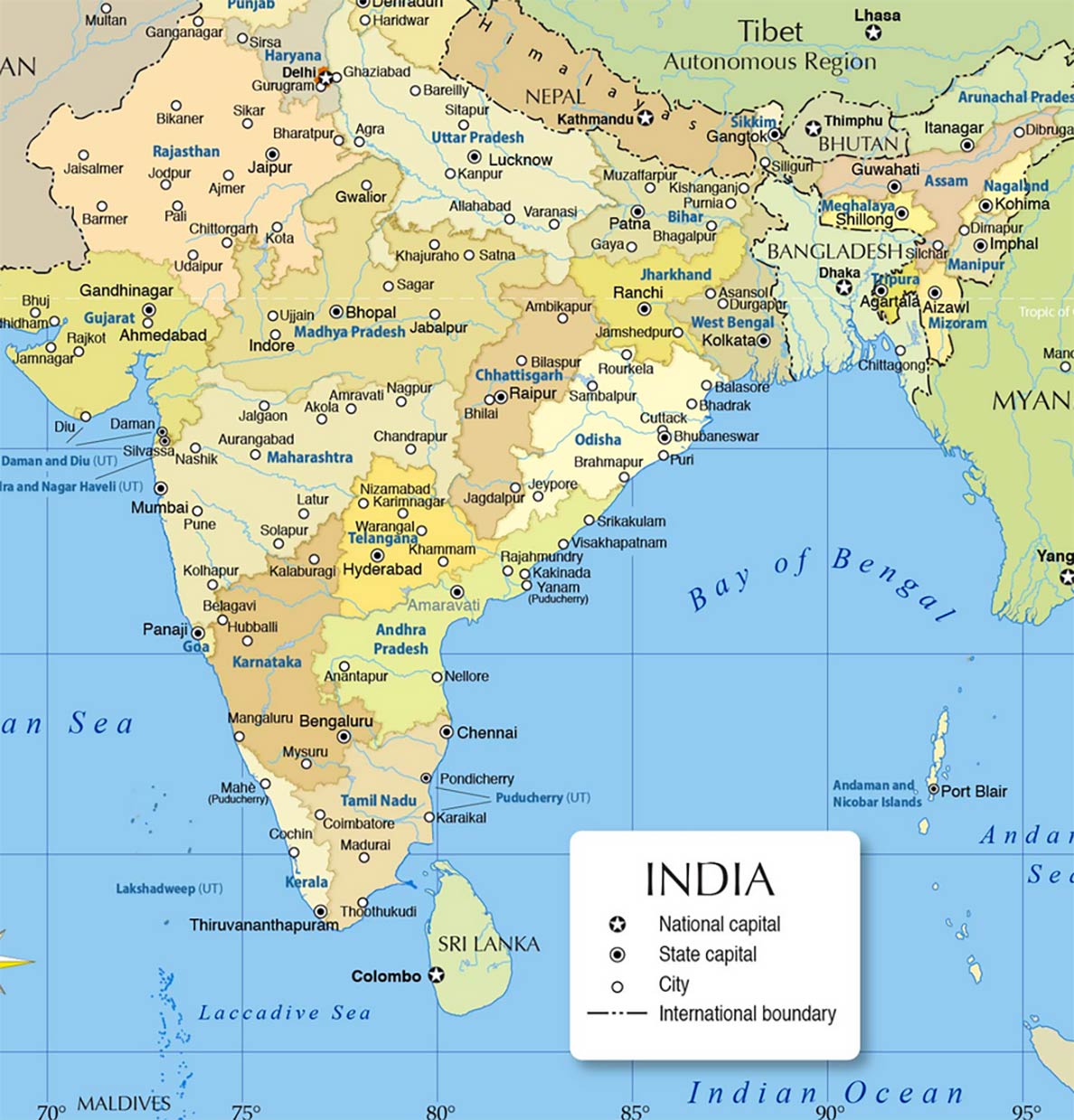 Map of India
Administrative Map of India with States and Union Territories and their capitals.

Know India: Culture and Heritage
The Ministry of Culture

Ravi Shankar
Ravi Shankar Foundation. The Sitar Man. Ravi Shankar (1920-2012) was an Indian musician and composer of Hindustani classical music. He was best known as an exponent of the sitar, and he popularized the use of the Indian instruments in pop music.

Sikhism
Wikipedia entry about Sikhism, a monotheistic religion that originated in the Punjab region.

View towards the skyline of the Lotus Colony in Shivaji Nagar in Mumbai, Maharashtra State.
Image: A.Savin


Economy of India
India has a mixed economy based on services (55%) and agriculture (16%).
Nearly 60% of India's gross domestic product is generated by domestic private consumption. The country remains the sixth largest consumer market in the world. Its GDP is also driven by government spending, investment and exports.
Before the COVID-19 pandemic, India was the fastest growing major economy in the world.

Since the 2000s, India has made remarkable progress in reducing absolute poverty. Between 2011 and 2015, more than 90 million people were lifted out of extreme poverty. However, the COVID-19 pandemic has reversed the course of poverty reduction, at least temporarily. The economic slowdown triggered by the outbreak is believed to have had a significant impact on poor and vulnerable households. [1]

Spices Board India
All about Indian Spices.

SpiceJet
Another low-cost airline with its hub at Indira Gandhi International Airport.

Vistara
Indian airline based in Gurgaon, with its hub at Delhi.


Indian Railways
The Deccan Odyssey
India's newest Luxury Train - Also known as the Palace On Wheels of Maharashtra.
The Palace on Wheels
A classy seven-day rail journey from New Delhi to Chittaurgarh.

Indian Railways
Indian Railways (IR) is India's national railway system operated by the Ministry of Railways; it consists of 18 zones (see below). 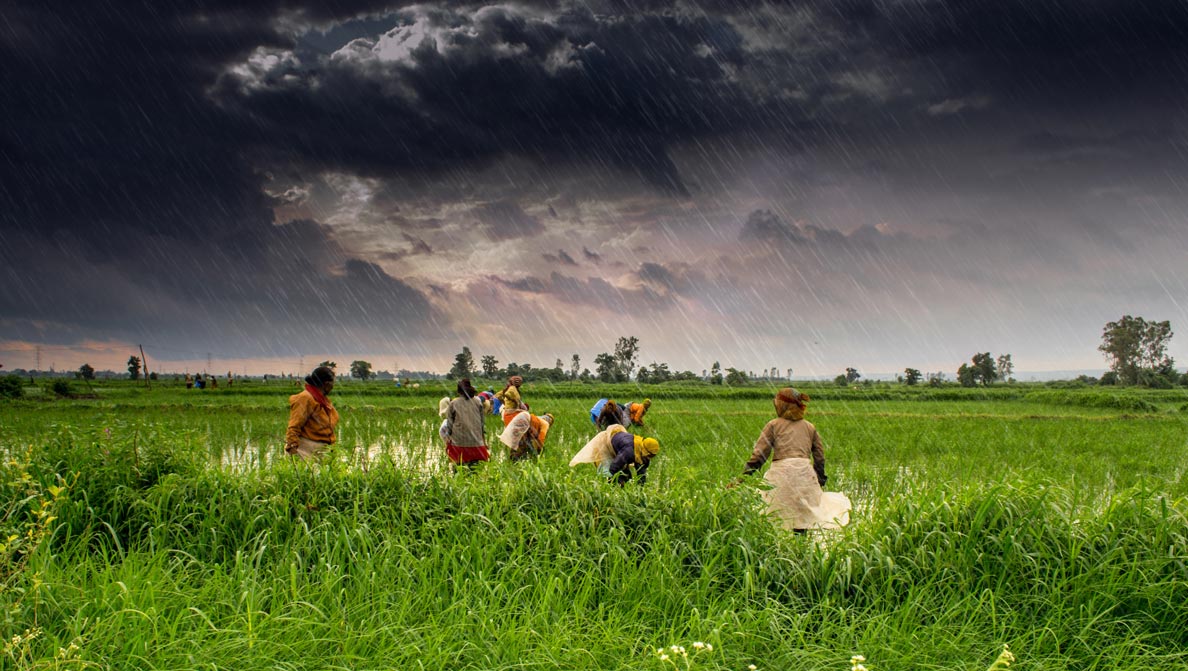 Chandigarh
Official guide to the capital of the Indian states of Punjab and Haryana.

Chhattisgarh Tourism Board
Useful information for your visit of Chhattisgarh.

Haryana
Oficial website for tourism in Haryana, the state of northern India.

Manipur
Official guide to Manipur, the state in northeast India, on the border to Myanmar.

Meghalaya
Official tourism portal Meghalaya, "The abode of clouds," is a mountain state in the northeastern part of the country.

Mizoram Tourism
Official guide to Mizoram, the state in northeastern India, between Bangladesh and Myanmar.

Odisha
Tourist guide to the state in eastern India with a coastline along the Bay of Bengal.

Punjab
The state is part of the larger Punjab region; it borders Pakistan in the west.

Rajasthan
All tourist highlights of Rajasthan.

Sikkim
The state in the southern Himalayas between Nepal, Tibet, and Bhutan.

Tamil Nadu
Explore Tamil Nadu, the state at the southern tip of India.

Telangana
India's newest state with Hyderabad at its center.

Uttar Pradesh
You're never alone in India's most populous state.

West Bengal
Tour guide to West Bengal in the eastern region of India along the Bay of Bengal. 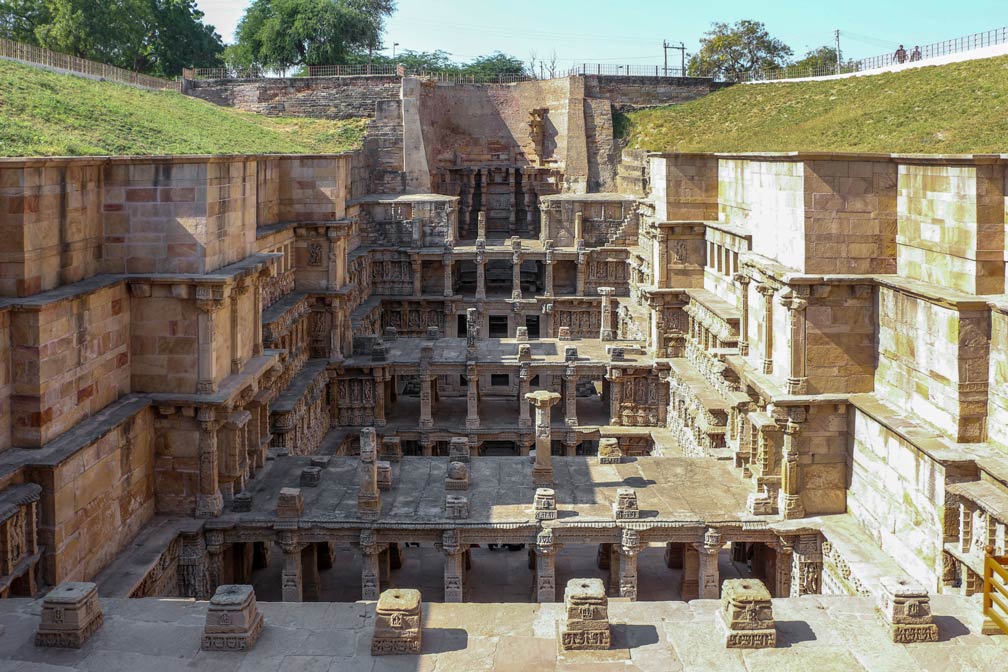 Agra Fort
The historical fortress of red sandstone in the city of Agra was the main residence of the emperors of the Islamic Mughal Dynasty.

Taj Mahal
The famous mausoleum in Agra was built by Mughal emperor Shah Jahan in memory of his third wife, the Empress consort Mumtaz Mahal.

Ellora Caves
Over 100 rock-carved caves in the Aurangabad district of Maharashtra. 34 monasteries and temples with rich sculptural decoration were dug side by side into the wall of a high basalt cliff between 600 and 1000 AD. 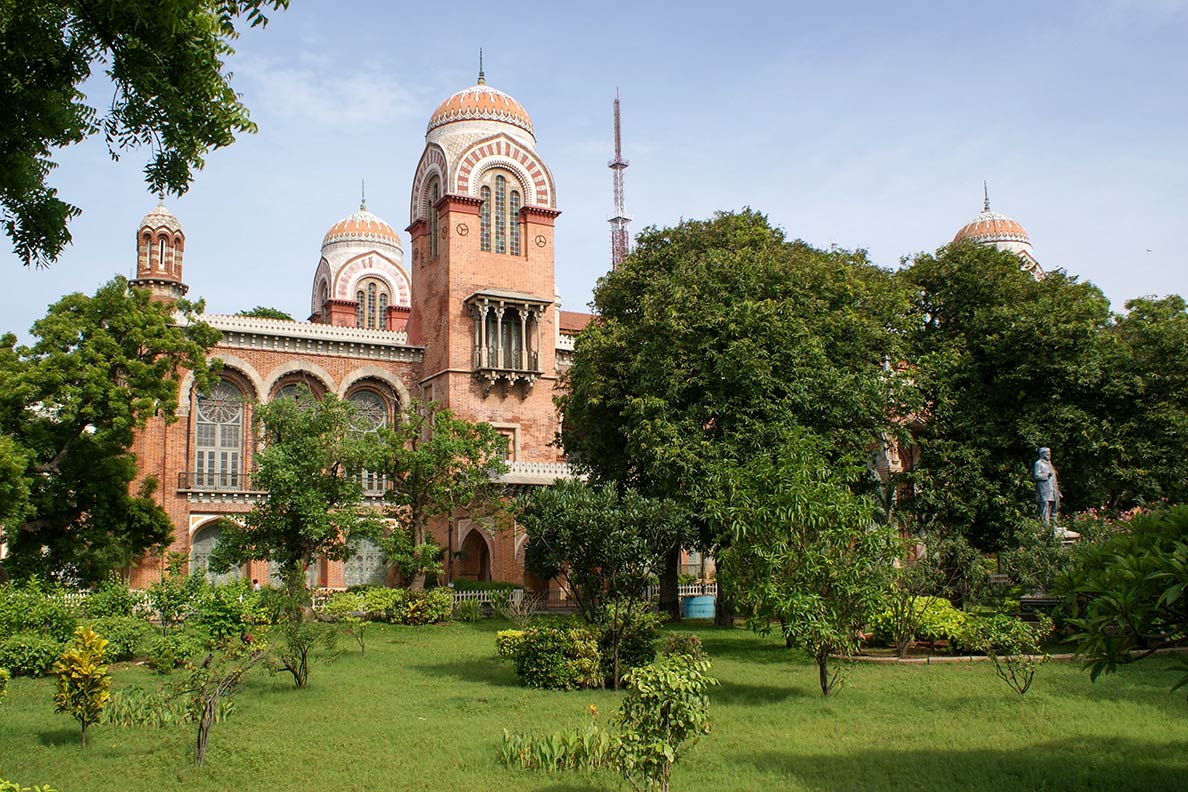 The Senate House is the administrative center of the University of Madras in Chennai, Tamil Nadu, India.
Image: Jonas Buchholz

Bangalore
Indian Institute of Science (IISc)
The public institute for research and higher education in science and engineering is located in Bangalore, Karnataka.

Chennai (Madras)
University of Madras
"Learning Promotes Natural Talent"; the university is one of the oldest and prestigious universities in India, established in 1857, Chennai, Tamil Nadu.

Indian Institute of Technology Delhi
IIT Delhi is one of the top-ranked universities in India.

Mumbai
University of Mumbai
The former University of Bombay is one of the oldest state universities in India, established in 1857.

Indian Institute of Technology Bombay
IIT Bombay is a leading college with its campus at Powai, in East Mumbai.


Research
Centre for the Study of Developing Societies
CSDS is an Indian research institute for the social sciences and humanities.

Air pollution in India is a major environmental issue. The image shows the Taj Mahal blanketed by smog.
Image: Adithya0376


Governmental:
Ministry of Environment & Forests
The ministry is in charge of the planning, promotion, coordination, and overseeing the implementation of environmental and forestry programs.


Non-Profit Research Institutions & NGOs:
Bombay Natural History Society
BNHS is a pan-India wildlife research organization that has been promoting the cause of nature conservation since 1883.

Centre for Science and Environment
CSE is a think tank on environment-development issues in India.

Down to Earth
A magazine for the environment, science, and nature.

Delhi Greens
Delhi Greens is a non-governmental organisation for a green environment and sustainable development.

Environmentalist Foundation of India
EFI is a wildlife conservation and habitat restoration group.

The Energy and Resources Institute
TERI is a research institute in New Delhi that specializes in the fields of energy, environment, and sustainable development.

Vindhyan Ecology and Natural History Foundation
Vindhya Bachao is a non-government organization based in Mirzapur engaged in the environmental protection of the Vindhya Range, the Gangetic Plains, and the Himalayas.

15th century Kalpa Sūtra (Jain text). The sutra shows the crescent-shaped Siddhashila, a place at the apex of the universe where all Siddhas (liberated souls) reside after Nirvana.
Image: Unknown


History
Overview of India's history from the Great Dynasties to Independence.

Medieval History of India
Article about India's medieval history from the National Portal of India. 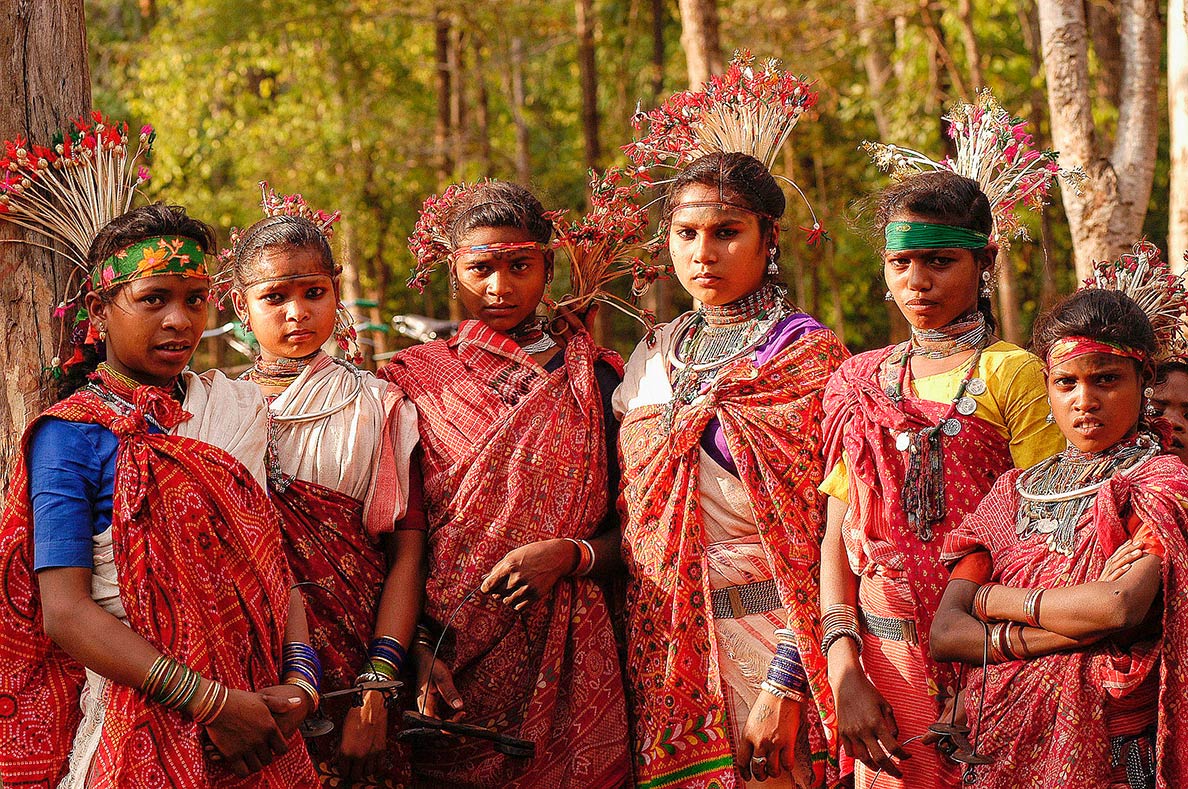 
Indigenous India
India is home to about 700 tribal groups with a population of over 104 million.

Adivasi
Wikipedia article about Adivasi, the collective term for the Scheduled Tribes of India.

The Indigenous Colour of India – The Indian Tribes
Tourmyindia article about various Indigenous peoples of India.

Indigenous people in India and the web of indifference
Down to Earth article about India's indigenous rights and the struggles for oil, coal, and forests at the expense of Indian tribes.

FAO: India
The UN Food and Agriculture Organization in India.