Terrace farming in Phek district near Pfutsero in Nagaland. The state's economy is for the most part based on agriculture and forestry.
Image: Tewu Mero 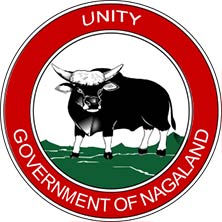 Satellite view and map of the Indian hill state of Nagaland, located in the remote area of the far north-eastern part of India. Nagaland borders the states of Assam to the west, Arunachal Pradesh and parts of Assam to the north, Myanmar to the east and Manipur to the south.

The Hornbill Festival in Nagaland. The annual festival is held from 1-10 December near Kohima.
Image: Supriya Sehgal

Nagaland covers an area of 16,579 km² (6,401 sq mi), compared; it is slightly larger than half the size of Belgium, or somewhat larger than the US state of Connecticut.

The region between India and Myanmar is mainly mountainous dissected by rivers and creeks. The forest covered Naga Hills are part of a complex of mountain ranges and hills on the border of India and Myanmar (Burma). The mountains can reach altitudes up to more than 1,800 m (6,000 ft). The highest elevation is Mount Saramati at 3,826 m. The peak is located near Tuensang town at the border of Nagaland and the Sagaing Region of Myanmar.

Nagaland is primarily a land of agriculture and has a population of about 2 million people.

The capital is Kohima; the largest urban center is Dimapur.

The Naga people are an ethnic group of more than 20 tribes native to the North Eastern part of India and north-western Myanmar (Burma). They do not have a common language. Spoken languages are broken Assamese (for intertribal communication), Hindi and English. Tribal languages are among others, Angami, Ao, Chang, Konyak, Lotha, Sangtam, Sema, and Chakhesang. The traditional Naga religion is animistic, but because of extensive missionary work in the 19th century, the main religion in Nagaland is Christianity (88%).