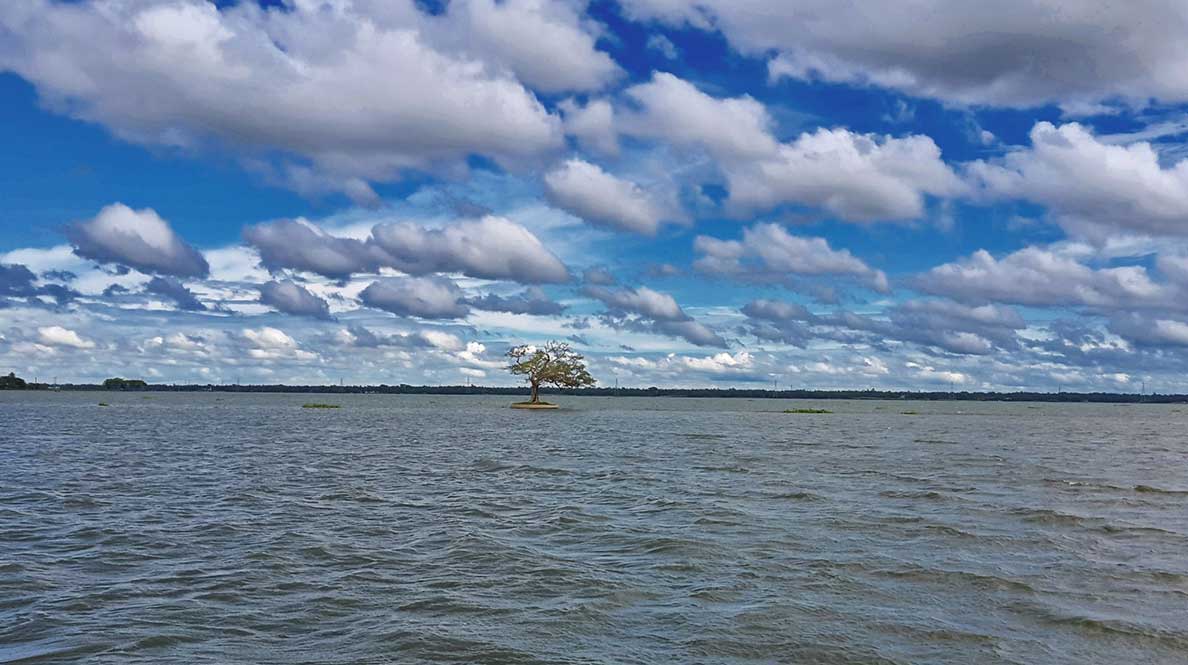 A haor near Sylhet, a city in the northeast of Bangladesh. Haors are bowl-shaped depressions of considerable areal extent located between the natural embankments of rivers or uplands in the northeastern region of Bangladesh. During the monsoon season (June through mid-October), the haors are full of water.
Image: Mp3moment 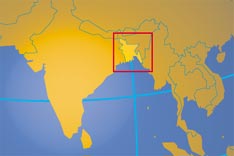 
Destination Bangladesh, a Nations Online country profile of the independent nation in southern Asia.
Bangladesh came into being as the People's Republic of Bangladesh when Bengali East Pakistan seceded from the union with (West) Pakistan in 1971.

The country is situated in the fertile plains of the Ganges (Padma) River delta and borders the Bay of Bengal. Bangladesh borders various states of India in the west, north and east and has a short border with Myanmar (Burma) in the southeast.

Bangladesh is one of the most densely populated countries in the world with an estimated 171 million people (in 2021). The majority of its population are followers of Islam (nearly 90%). The capital and largest city is Dhaka. Spoken language is Bangla (or Bengali by 98%).


What is Bangladesh famous for?
It is home to the world's largest river delta, which is formed by the Brahmaputra and the Ganges river. Roaming Bengal tigers in the Sundarbans, a mangrove and swampland in the delta. For the longest natural uninterrupted sea beach in Asia (Cox's Bazar beach), which is 150 km long. The Malnicherra Tea Estate, the oldest tea garden in the subcontinent. Ancient historical Panam City. Ilish fish and Muslin gauze like Jamdani.

The boundaries of modern Bangladesh were established with the partition of Bengal in August 1947, when British India was separated along religious, linguistic, and cultural lines. The western part of the region became West Bengal, now a state in eastern India, and the eastern part became East Pakistan, as part of the newly formed Dominion of Pakistan.

A pro-democracy movement in East Pakistan that thrived on Bengali nationalism and self-determination led to the Liberation War and eventually the emergence of Bangladesh as a sovereign and independent nation in 1971. 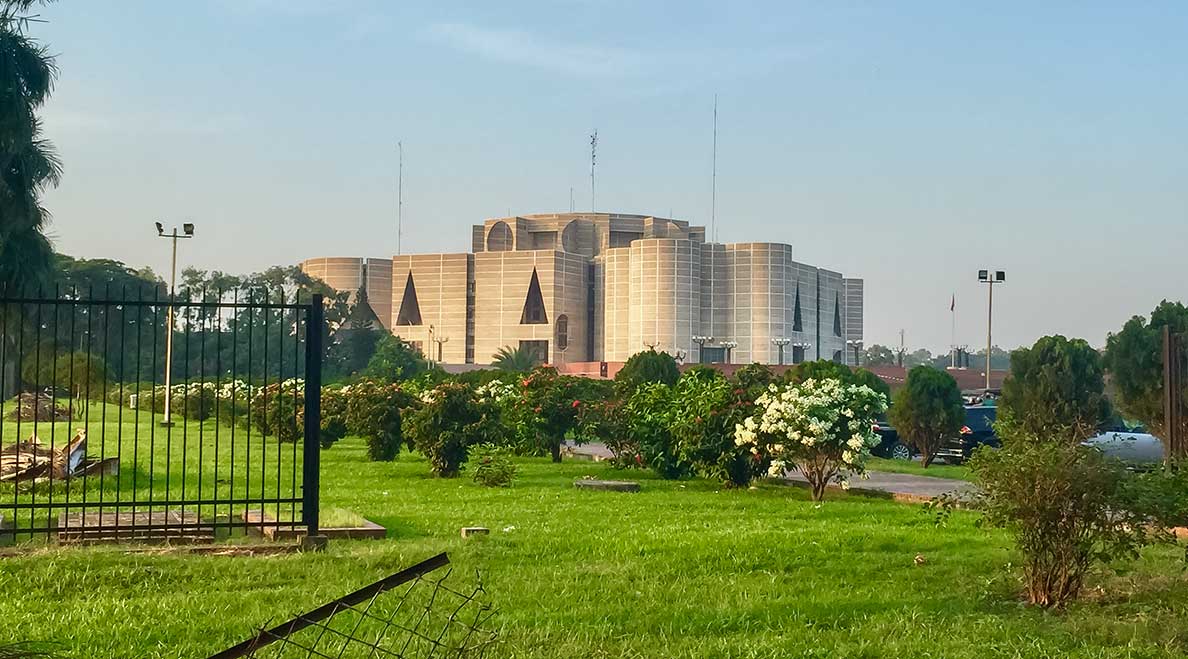 
Note: External links will open in a new browser window.

Bangladesh Ministry of Foreign Affairs
The official home page of the ministry. 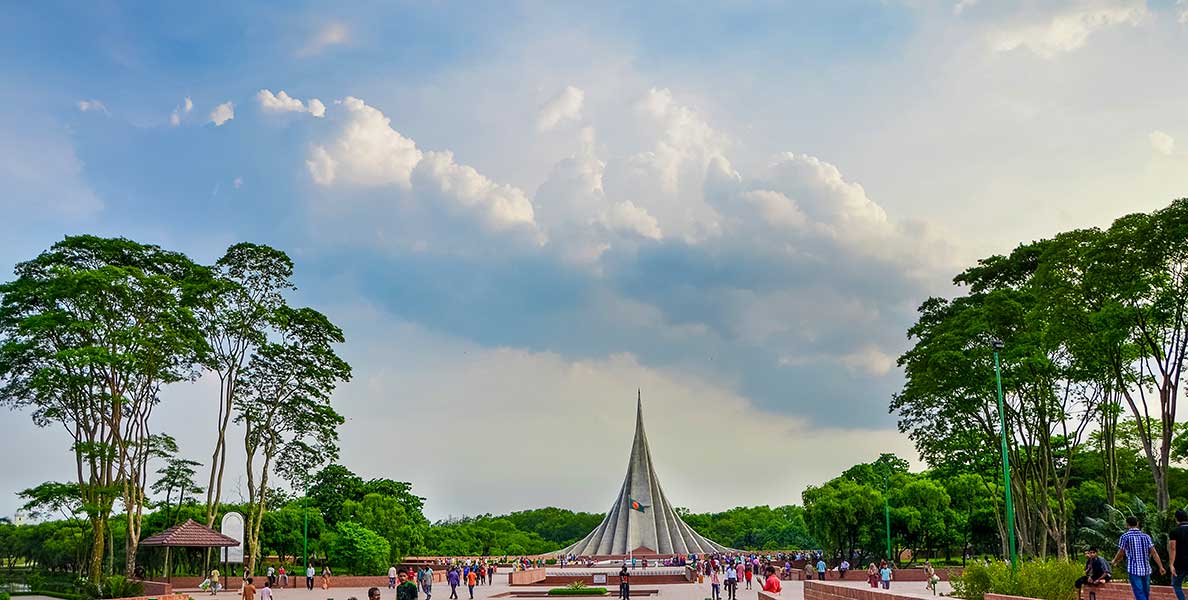 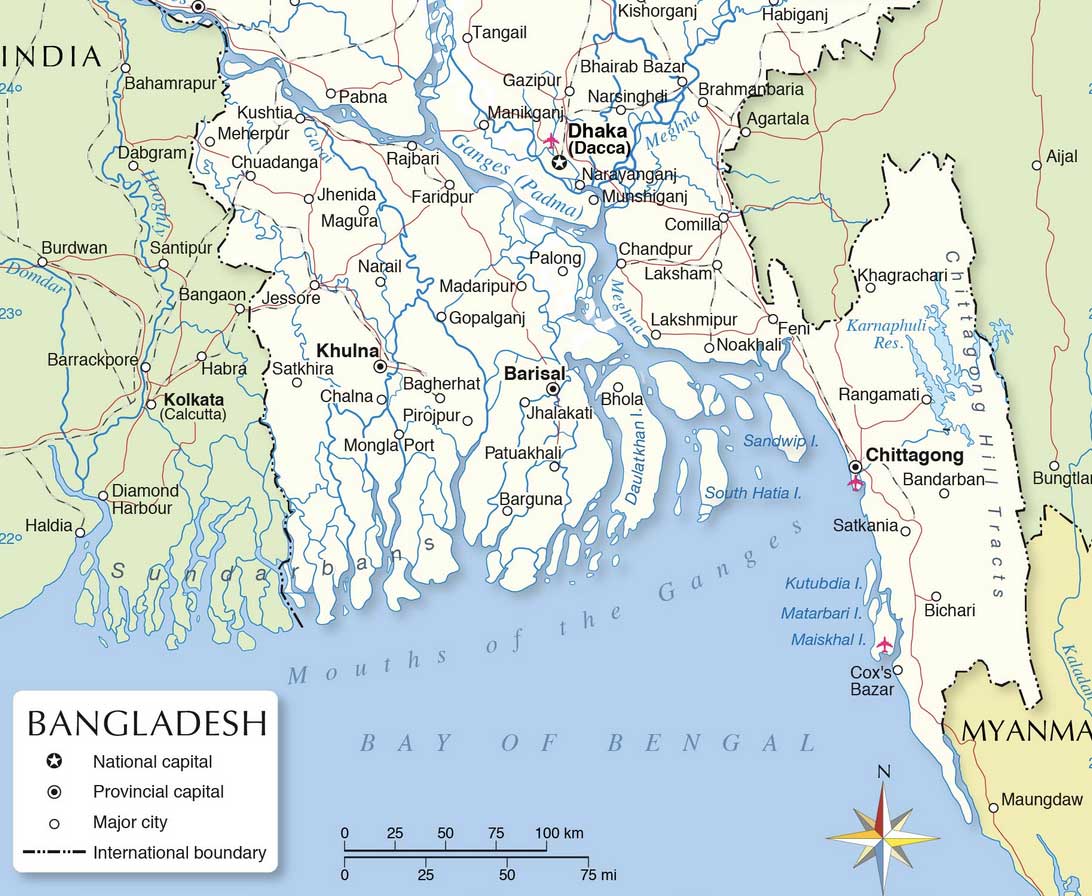 Map of Bangladesh (click the map to enlarge)
Image: © nationsonline.org

Bangladesh Media Landscape
The emergence of satellite television and the spread of the internet in the last 15 years have changed Bangladesh's media landscape.
Television is the most popular medium. The state-owned BTV has a nationwide terrestrial broadcast, and the private satellite channels and news-based television stations are widely available.
But the media tend to be polarized and aligned with one or the other main political faction. Bangladesh authorities are arbitrarily arresting government critics under the draconian Digital Security Act, stifling civil society, independent media, and human rights activists.
Sources: BBC, Media Landscapes, Reporters Without Borders, HRW

The Daily Ittefaq
The Daily Ittefaq is the country's oldest newspaper and one of Bangladesh's largest-circulation newspapers.
Jugantor
The Daily Jugantor is a Bengali language newspaper with its headquarters in Dhaka.
Kaler Kantho
Kaler Kantho is a popular Bengali daily.
Manab Zamin
Manab Zamin is a major Bangla daily tabloid newspaper in Bangladesh, published from Dhaka.
Prothom Alo
Prothom Alo is a major Bengali language daily newspaper published from Dhaka. 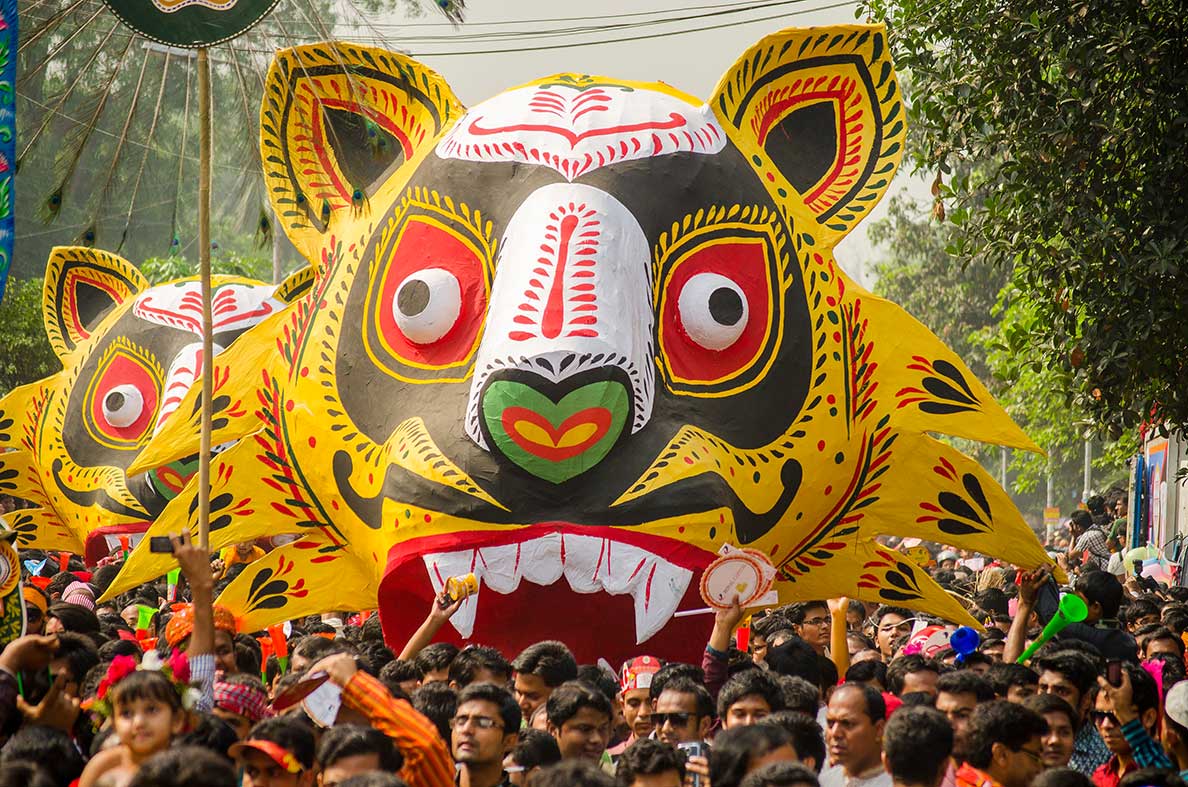 Floats at Mangal Shobhajatra, a festive, colorful parade in Dhaka and one of the traditional events in the city during the Bengali New Year, organized by the teachers and students of the Faculty of Fine Arts of Dhaka University.
Image: Abidhasan00

Banglapedia - the National Encyclopedia of Bangladesh
Banglapedia is the most comprehensive reference work to date on Bangladesh from high antiquity to the present.

Cinema of Bangladesh
Wikipedia article about Dhallywood, the Bengali-language film industry based in Dhaka.

The Ricksha Arts of Bangladesh
The original site dedicated to one of Bangladesh's unique popular arts vanished in one of the black holes of the internet, replaced by advertising for a Utah based escort service; what remains is the dying art documented at Wikipedia.

Shital Pati weaving
Shital Pati is the traditional art of making a handcrafted mat by weaving together strips of a green cane known as 'Murta'. The mat is used by people all over Bangladesh as a sitting mat, bedspread or prayer mat.

Traditional art of Jamdani weaving
Jamdani is a sheer cotton fabric, traditionally woven on a handloom by craftspeople and apprentices around Dhaka. In the West, jamdani textiles, known as muslin, combine an intricate design with muted or bright colors, and the finished garments are very breathable. In the Mughal period (1526–1707), the finest jamdanis were produced at Dacca (today Dhaka), Bengal. 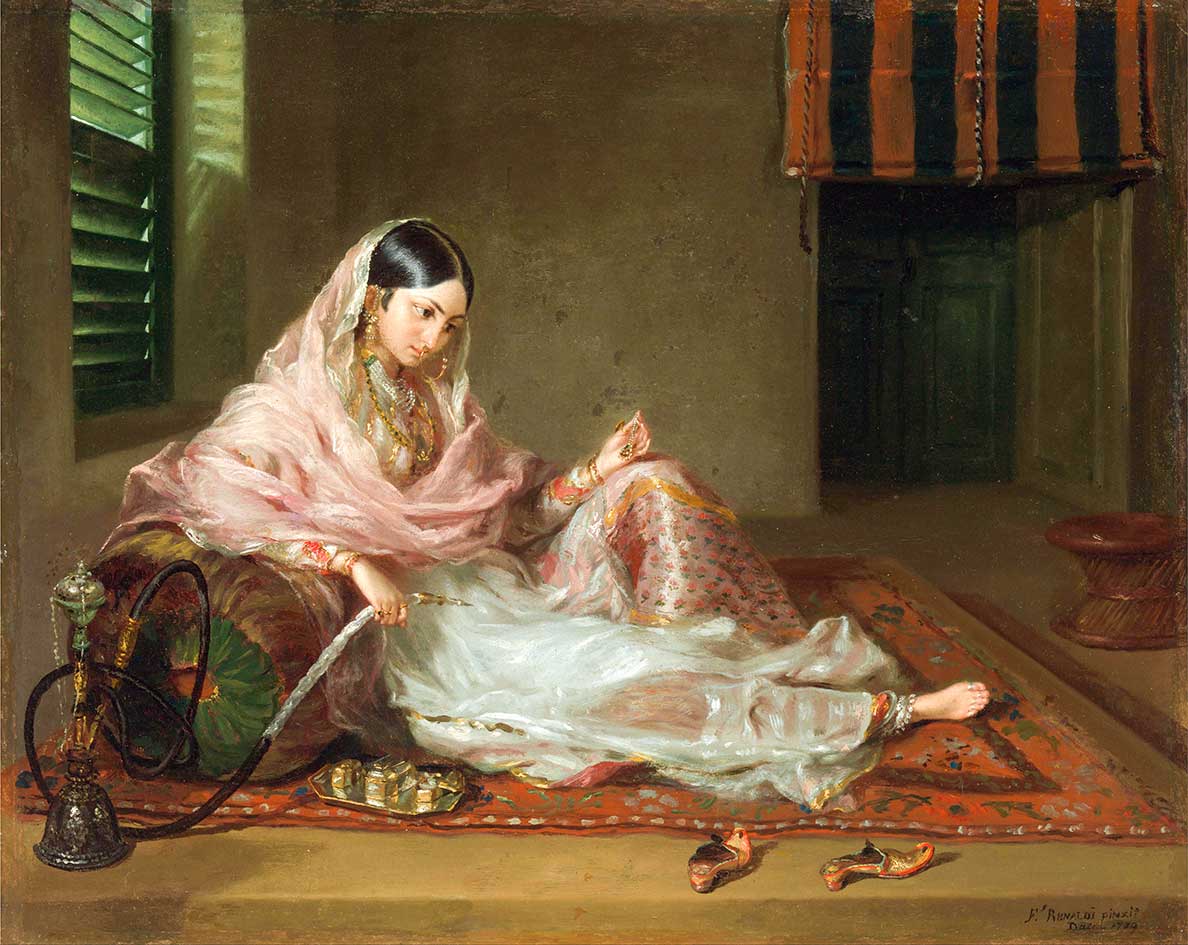 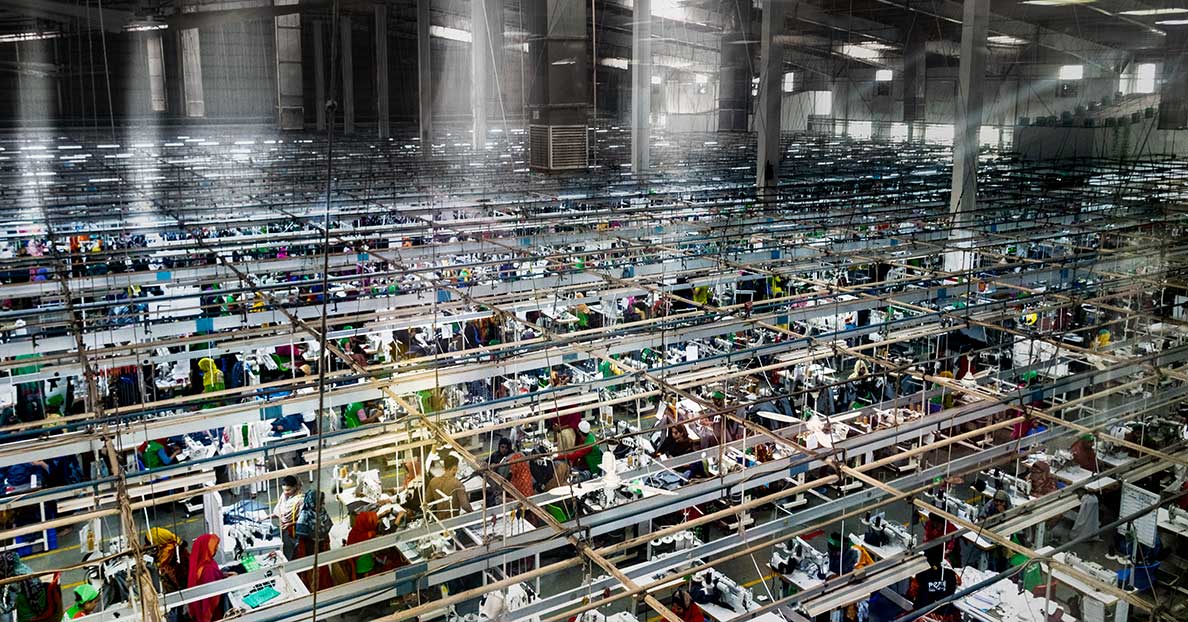 Bangladesh is one of the world's emerging and fastest-growing economies. The country has cut extreme poverty in half and achieved lower-middle-income status. Life expectancy, literacy rates and per capita food production have increased significantly. Its economy has grown roughly 6% per year since 2005 despite prolonged periods of political instability, poor infrastructure, endemic corruption, insufficient power supplies, and slow implementation of economic reforms. About 39 million people (23%) are still living below the national poverty line.

The economy of Bangladesh is largely dependent on agriculture, especially rice. However, the garment (RMG) sector of Bangladesh has become the largest earner of foreign exchange. RMG is the largest employer of women in Bangladesh. Garment exports, the backbone of Bangladesh's industrial sector, accounted for more than 80% of total exports and surpassed $25 billion in 2015.

Bangladesh Export Processing Zone Authority
BEPZA is a government agency whose mission is to manage the various export processing zones (EPZs) in Bangladesh.

Major Companies in Bangladesh
Small, medium and large family-owned conglomerates dominate Bangladesh's economy. Some of the important players are listed below.

ACI Limited
Advanced Chemical Industries Ltd. is one of the large conglomerates in Bangladesh; it deals in pharmaceuticals, consumer brands, and agribusiness.

Habib Group
Bangladeshi industrial conglomerate is headquartered in Chittagong that produces and markets a variety of products and has business interests in textiles, aviation, cement, steel, real estate, insurance and banking.

PHP Family
PHP Family is a leading business conglomerate in Bangladesh. According to its website, PHP Ship Breaking and Recycling Industries Limited is the only ship recycling facility in Bangladesh that meets the requirements of the Hong Kong International Convention.

PriyoShop.com
PriyoShop.com is a Dhaka based eCommerce platform and online shopping site.

Walton Group
Walton is a Bangladeshi conglomerate based in Gazipur that manufactures electronics, computers, automobiles and telecommunications products. 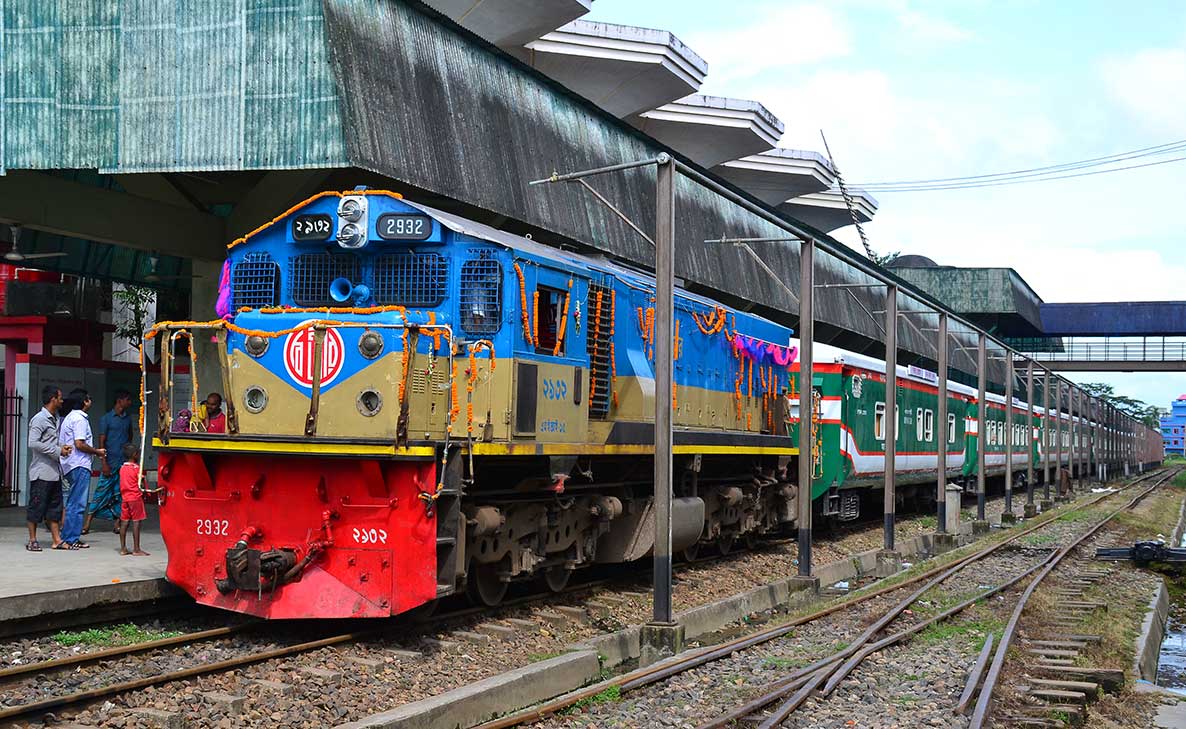 The 18 km (11 mi) long and in places 3 km (1.9 mi) wide Kuakata Beach is located at the end of a headland in southeastern Bangladesh. Kuakata is known as the "Daughter of the Sea" in Bangladesh.
Image: Fahimrb

Bangladesh Tourism Board
Website of the National Tourism Organization of Bangladesh, which is responsible for promoting tourism, which it does not do.

Bangladesh Parjatan Corporation
A guide to Bangladesh by the National Tourism Organization. One of the many similar tailored government websites with little information.

Wikivoyage: Saint Martins Island
A guide to the country's only coral island. 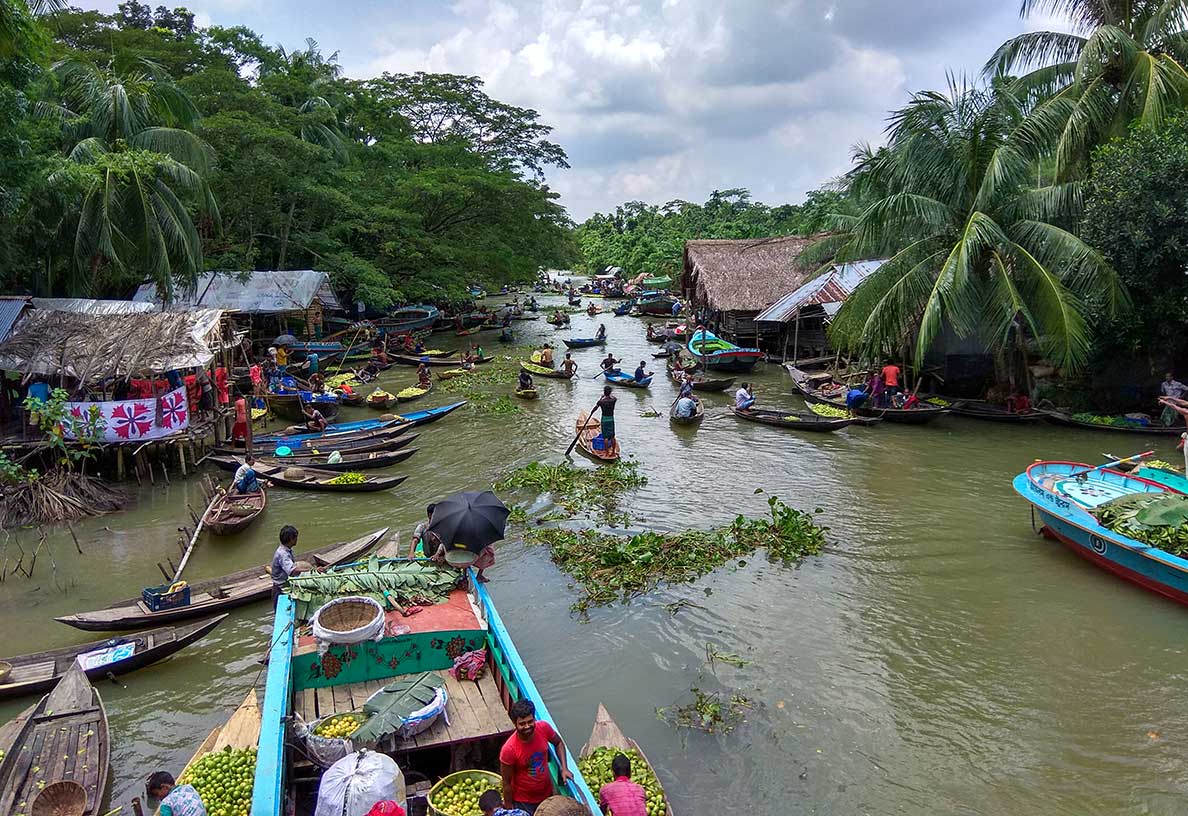 Monsoon season is the time when the floating guava markets on the canals that crisscross thousands of guava orchards around Bhimruli in Jhalokathi district come alive with visitors from all over the country.
Image: Lonely Explorer 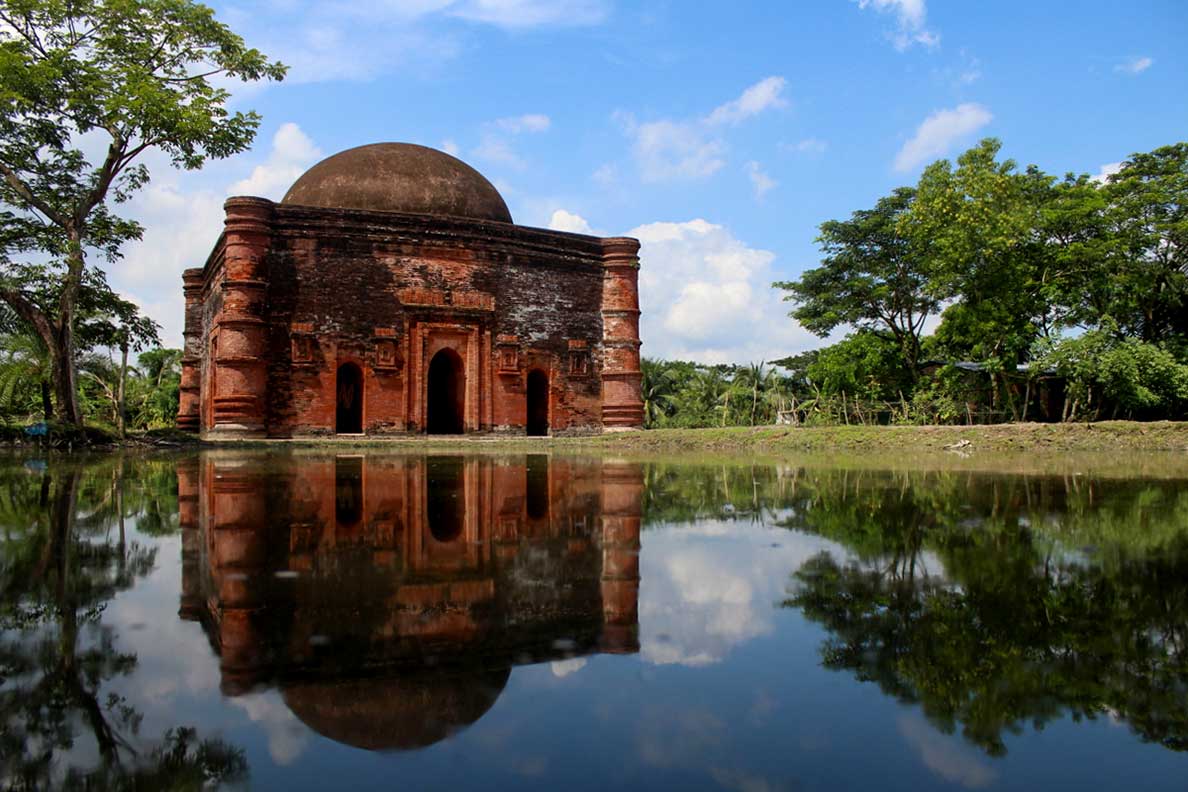 Historic Mosque City of Bagerhat
Historically known as Khalifatabad, the ancient city is situated in the southwestern part of Bangladesh in the Bagerhat district in the Sundarbans. The property contains some of the most significant buildings of early Muslim architecture of Bengal.

Ruins of the Buddhist Vihara at Paharpur
Ancient monastery-city with ruins of an extensive Buddhist complex. The ruins are witness to the rise of Mahayana Buddhism in Bengal from the 7th century onwards. The complex, known as Somapur Mahavira, the "Great Monastery," was a renowned intellectual center until the 12th century. With its layout perfectly adapted to its religious function, this monastic city represents a unique artistic achievement that influenced Buddhist architecture as far away as Cambodia through its simplicity and harmony of its lines and the abundance of its sculptural decorations.

The Sundarbans
The Sundarbans is one of the largest mangrove forests in the world, covering the delta of the Ganges, Brahmaputra and Meghna rivers in the south of Bangladesh and the southern part of West Bengal (India). The mangrove area is known for its wide range of fauna, including some hundred bird species, lizards, mudskippers, dolphins, and the threatened Bengal tiger. 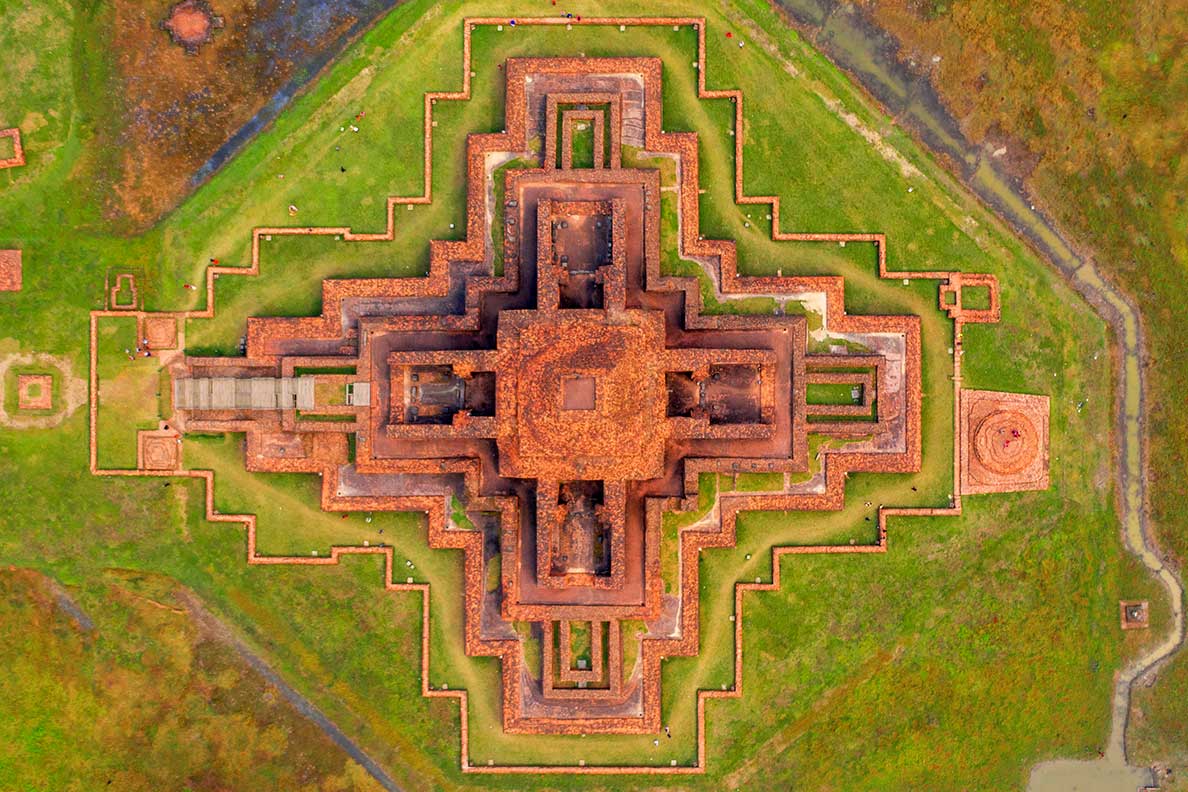 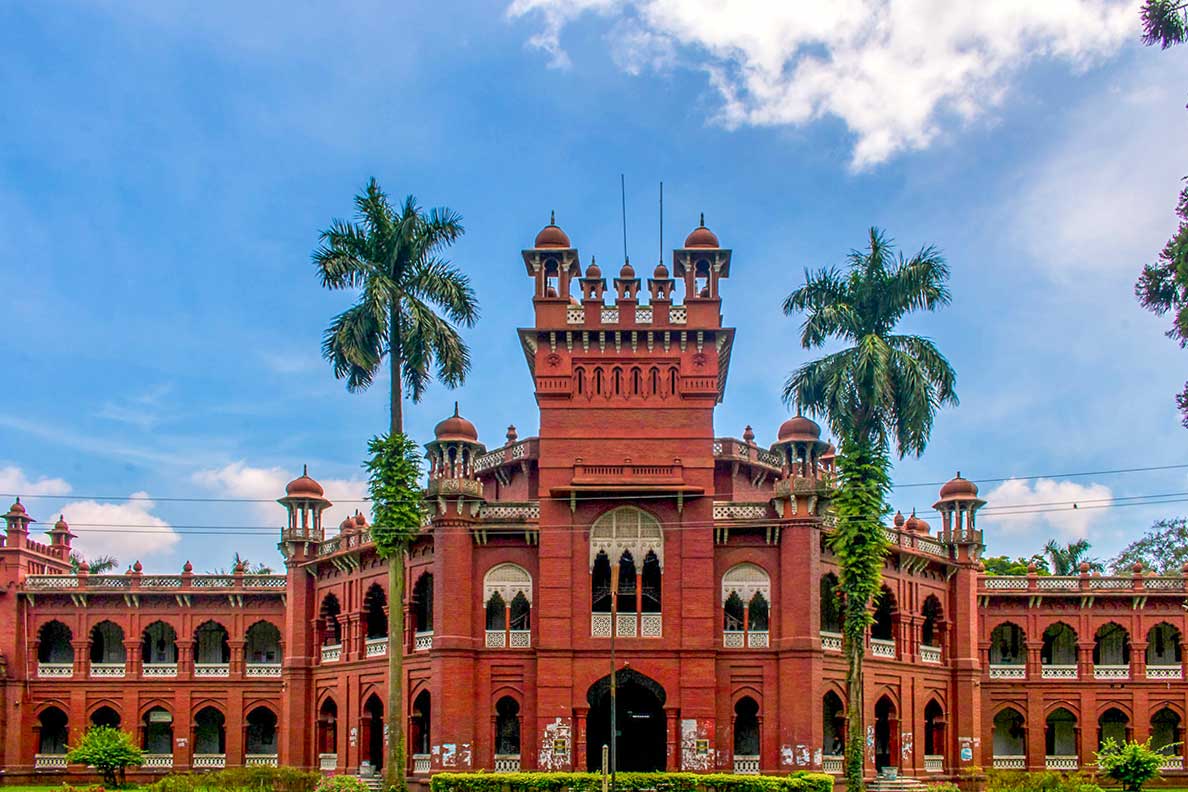 The Curzon Hall in Dhaka, a building from the British Raj-era, is home to the University of Dhaka's Faculty of Science.
Image: Saiful786 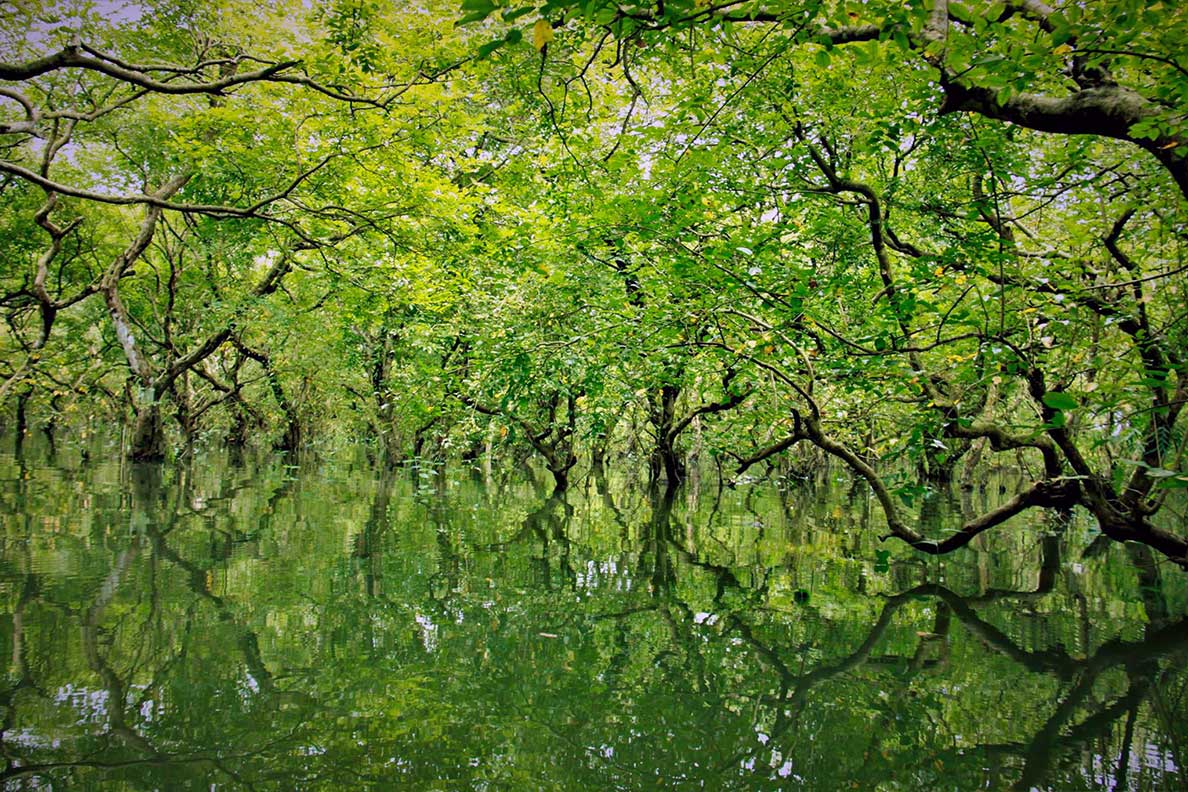 Within the Ratargul Swamp Forest in the northeast of Bangladesh, about 20 km (13 mi) north of the city of Sylhet, near the border to Meghalaya (India).
Image: Nadia Islam Nitul


Bangladesh Ministry of Environment, Forest and Climate Change
The agency for the planning, promotion, co-ordination and overseeing the implementation of environmental and forestry programs.

Bangladesh Department of Environment
DOE's mission is to ensure a clean and healthy environment for the benefit of present and future generations.

Flood Forecasting and Warning Centre (FFWC)
The center monitors rainfall and water levels throughout Bangladesh - with a lag of about 2 months. 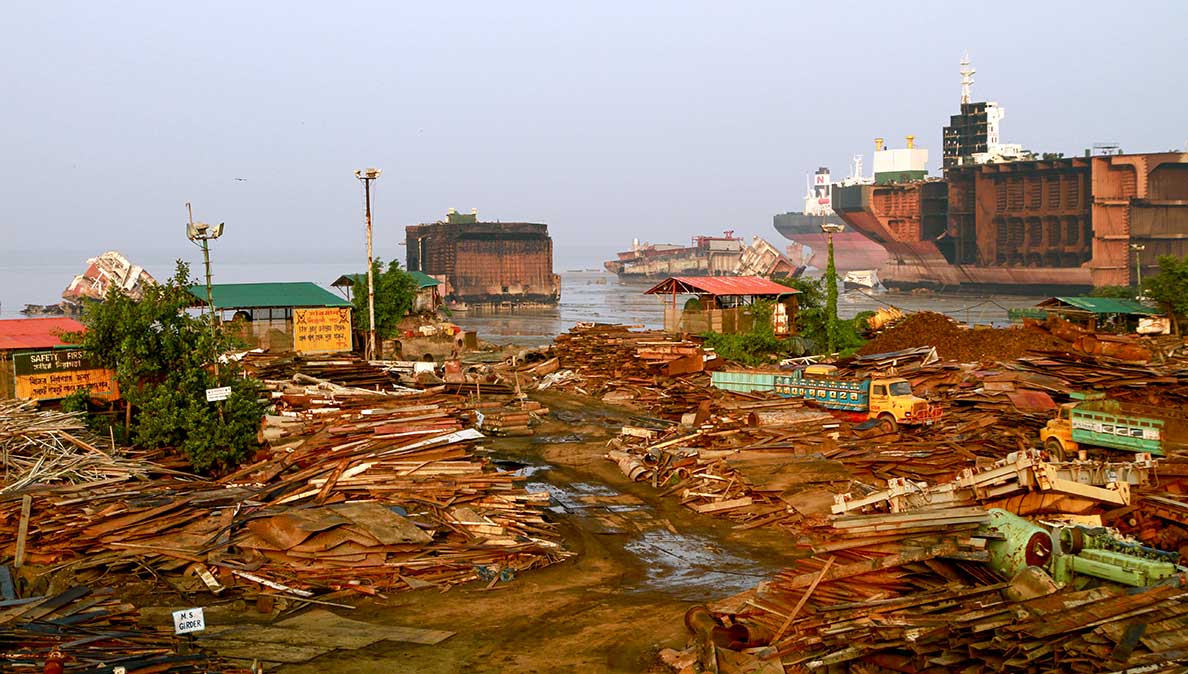 Breaking ships at Chittagong, the world's largest ship breaking yard. It employs over 200,000 Bangladeshis and accounts for around one-half of all the steel in Bangladesh.
Some shipbreaking practices have highly concerning environmental and human impacts, releasing materials such as oil, asbestos and toxic paints into the local environment, and disrupting biodiversity. [1]
Image: Utenriksdepartementet UD 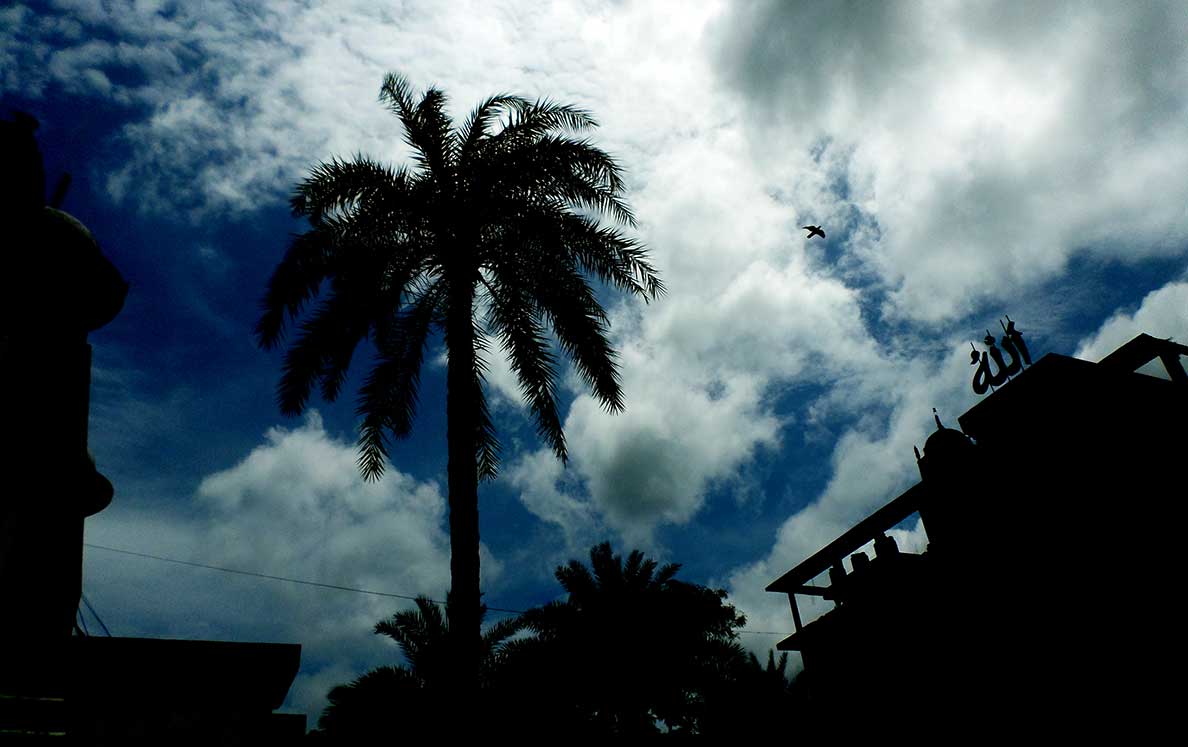 The country's early documented history was characterized by the succession of Hindu and Buddhist kingdoms and empires vying for regional dominance. Islam arrived in the 6th-7th centuries CE and gradually became dominant in the region from the early 13th century through the conquests of Bakhtiyar Khalji and the activities of Sunni missionaries such as Shah Jalal.

History
Banglapedia article about the history of Bangladesh.

Bangladesh Genocide Archive
Online archive of the chronology of events of the almost unknown Genocide in Bangladesh in 1971.

The Genocide the U.S. Can't Remember, But Bangladesh Can't Forget
Smithsonian Magazine's advertising peppered article about the bloody massacre that would lead to the birth of Bangladesh.

The Bangladesh Liberation War Museum
The museum in the center of Dhaka shows the history of the war for Bangladesh's independence in 1971.

Rahman, Bangabandhu Sheikh Mujibur (1920-1975)
Banglapedia article about the "Father of The Nation of Bangladesh." 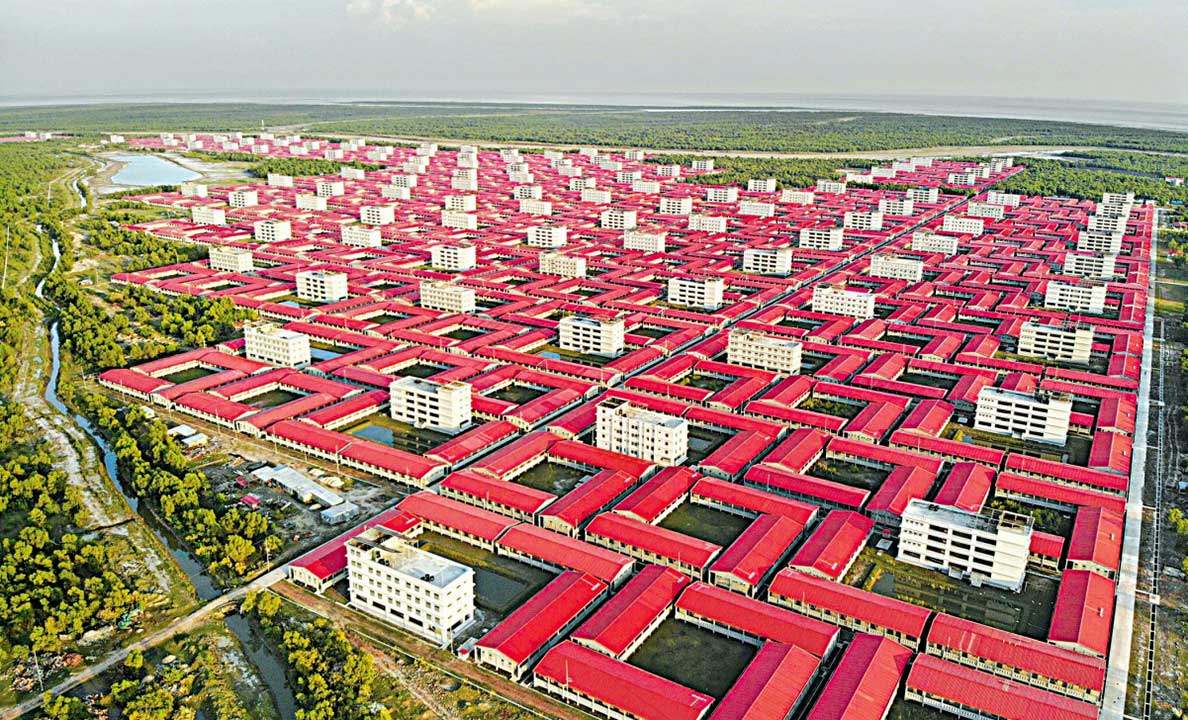 This aerial view of Bhasan Char Island shows part of the housing complexes built on the island off the coast of southwestern Bangladesh to resettle Rohingyas from camps near Cox's Bazar.
Image: The Daily Star

The Rohingya are a stateless Muslim minority in Myanmar. Before the displacement crisis, an estimated 1.4 million Rohingya (in Myanmar known as "Bangali") lived in the country.

The latest exodus began on 25 August 2017, when violence broke out in Myanmar's Rakhine State, driving more than 742,000 to seek refuge in neighboring Bangladesh. Most arrived in the first three months of the crisis.