Satellite View and Map of Cyprus

Rock of the Greek (Petra tou Romiou), also known as Aphrodite's Rock. According to legend, the foaming waters near this rock is the site of the birth of Aphrodite, the Greek goddess of love, beauty, pleasure, and procreation.
Image: Anton Zelenov

The satellite view and the map show the island of Cyprus, the third largest island in the Mediterranean Sea. The island is geographically already part of Asia (Middle East), located about 80 km (50 mi) south of the Turkish coast and about 120 km (75 mi) west of the coast of Syria. Cyprus shares maritime borders with Egypt, Greece, Israel, Lebanon, Syria, and Turkey.

The island's area is divided into three political entities, the Republic of Cyprus, the Turkish Republic of Northern Cyprus and the United Kingdom with their Sovereign Base Areas of Akrotiri and Dhekelia.

The Republic of Cyprus became an independent state on 16 August 1960, and a member of the United Nations one month later, it is a member state of the European Union since 2004. 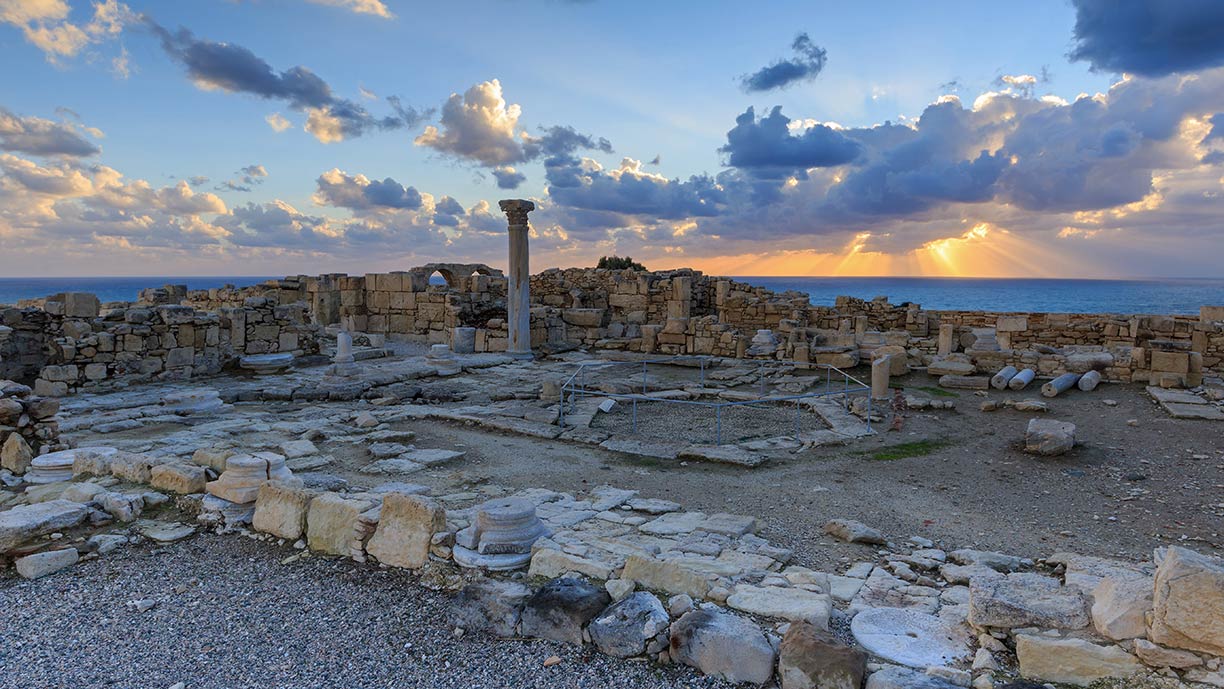 Ancient town of Kourion near Limassol. Kourion was an important city-state on the southwestern coast of Cyprus.
Image: Alexander Savin


Cyprus covers an area of 9,251 km² in the Mediterranean Sea. About two-thirds of the area belongs to the Republic of Cyprus, and one-third is de facto under the control of the self-declared Turkish Republic of Northern Cyprus. The British Base Areas occupy 254 km².

The Troodos mountain range dominates the center of Cyprus' landscape. Along the northern shore of the island are the Kyrenia Mountains. To the south of the Kyrenia range lies the Mesaoria, a broad plain that extends from the Morphou Bay in the northwest to the Bay of Famagusta in the east. There are some smaller plains on the coast in the south, where the Paphos International Airport and the cities of Larnaca and Limassol are located.
The highest peak is Mount Olympus with 1,952 m (6,404 ft), the mountain is part of the Troodos range.


But the island is divided since 1974 into the Greek-speaking Republic of Cyprus in the southern part and the self-proclaimed Turkish Republic of Northern Cyprus. UN peacekeeping forces (UNFICYP) maintain a buffer zone between the south and the north, but the division remains unresolved until today, despite pressure from the European Union and the United Nations.

The national capital of the Republic of Cyprus is

Related countries are Greece and Turkey.


To view the street map, click on the "Map" button.
To find a location use the form below.