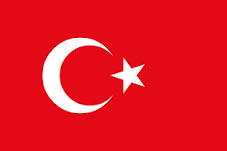 The map shows Turkey, officially the Republic of Türkiye, a country on the Anatolian peninsula in western Asia with a small enclave in Thrace in the Balkan region of southeastern Europe. The main portion of the Turkish state is located on the Anatolia peninsula, also known as Asia Minor, the westernmost part of Asia. Turkey is a unitary state with a central government.

Turkey is bounded by the Aegean Sea in the west, by the Mediterranean Sea in the south and by the Black Sea in the north. The country is bordered by Armenia, Iran, and Azerbaijan (exclave of Nakhchivan) in the east, by Georgia in the northeast, by Bulgaria and Greece in the northwest, and by Iraq, and Syria in the southeast. Turkey shares maritime borders with Cyprus, Egypt, Northern Cyprus, Romania, Russia, and Ukraine.

With an area of 783,562 km², the country is more than twice the size of Germany or slightly smaller than the U.S. states of Texas and Louisiana combined.

Turkey has a population of 83 million people (in 2020), largest city is

Istanbul, the second-largest city and the national capital is 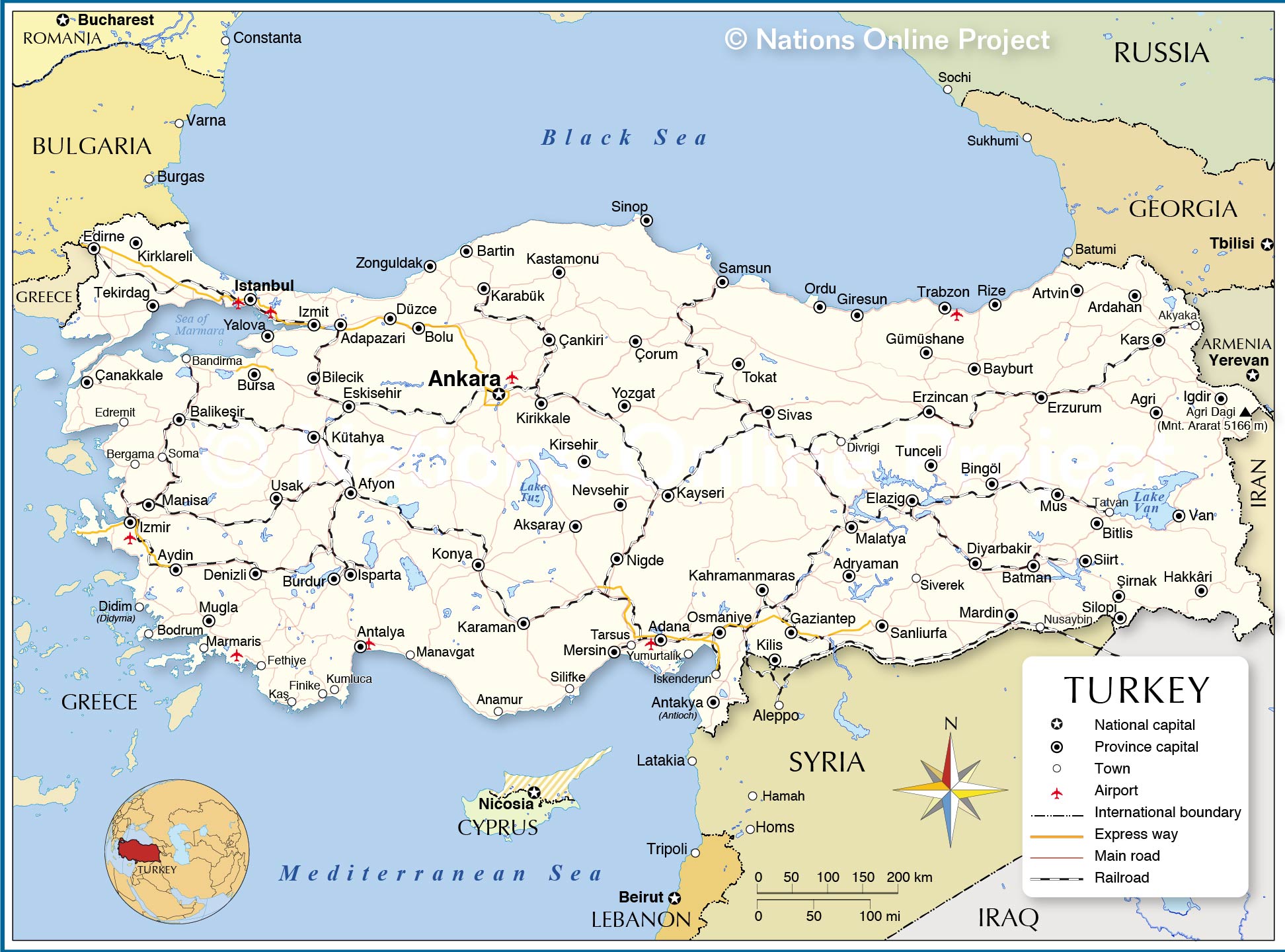 You are free to use the above map for educational purposes, please refer to the Nations Online Project.

Turkey can be subdivided into seven major geographical regions. 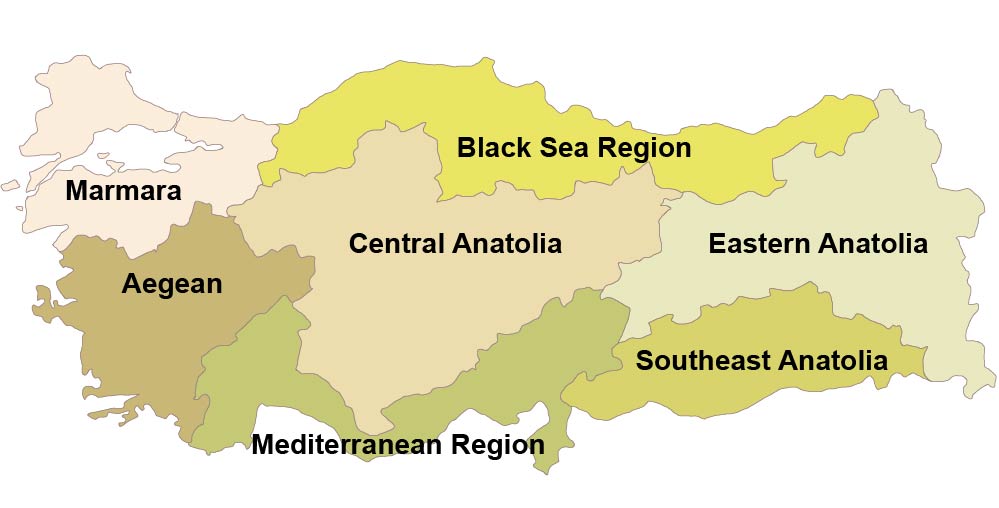 Map of administrative regions of Turkey, this regions are fairly conform to the geographical regions of the country. The country is subdivided into 81 provinces and further divided in 957 districts.

The Black Sea region is a long stretched mountainous region along the Black Sea with a predominantly rural population. Major cities are Samsun, a Black Sea port, the port city of Zonguldak, and Trabzon, a main port on the historical Silk Road was the capital of the Empire of Trebizond.

The Aegean region shares much of the history of Ancient Greece, home to the city-states of Ephesus, Miletus, and Halicarnassus (today Bodrum). The Aegean region is also one of Turkey's prominent tourism centers.

Central Anatolia is the heartland of Turkey. The historical region is home to the country's capital Ankara and other major cities like Konya and Kayseri. Also located in central Anatolia is Cappadocia, the ancient region between Lake Tuz and the Euphrates, famous for its "fairy chimneys". The landscape where erosion shaped the soft volcanic rock into thousands of strangely shaped towers is now a hangout for hot-air balloons.

Mountainous Southeast Anatolia is also known as Turkish Kurdistan. It borders Syria in the south, and Iraq in the southeast. In ancient times Southeast Anatolia was part of the historical region of northwestern Mesopotamia, the site of the earliest urban civilizations. There are two UNESCO World Heritage Sites in Southeast Anatolia, Nemrut Dağ (Mount Nemrut); erected on its summit are a number of large statues surrounding the mausoleum of Antiochus I (69–34 B.C.), who reigned over the Commagene kingdom. The archaeological site of Göbekli Tepe presents monumental T-shaped pillars. The world’s oldest stone structures were erected by an unknown civilization between 9,600 and 8,200 BCE, a time that predates Stonehenge by 6,000 years.

The Eastern Anatolia region is the easternmost part of Turkey; it was formerly part of Western Armenia. It is Turkey's region with the lowest population density. The main economic activity is agriculture and animal husbandry. Main urban centers are Agri (Ağrı), a city with an agriculture industry, Van, a major city near the Turkish border with Iran lies on the shores of Lake Van, the largest lake in Turkey and one of the world's largest lakes with no outlet. Erzurum is a university town and a popular winter sports destination in Turkey.

Major Turkish cities with a population of more than one million people. 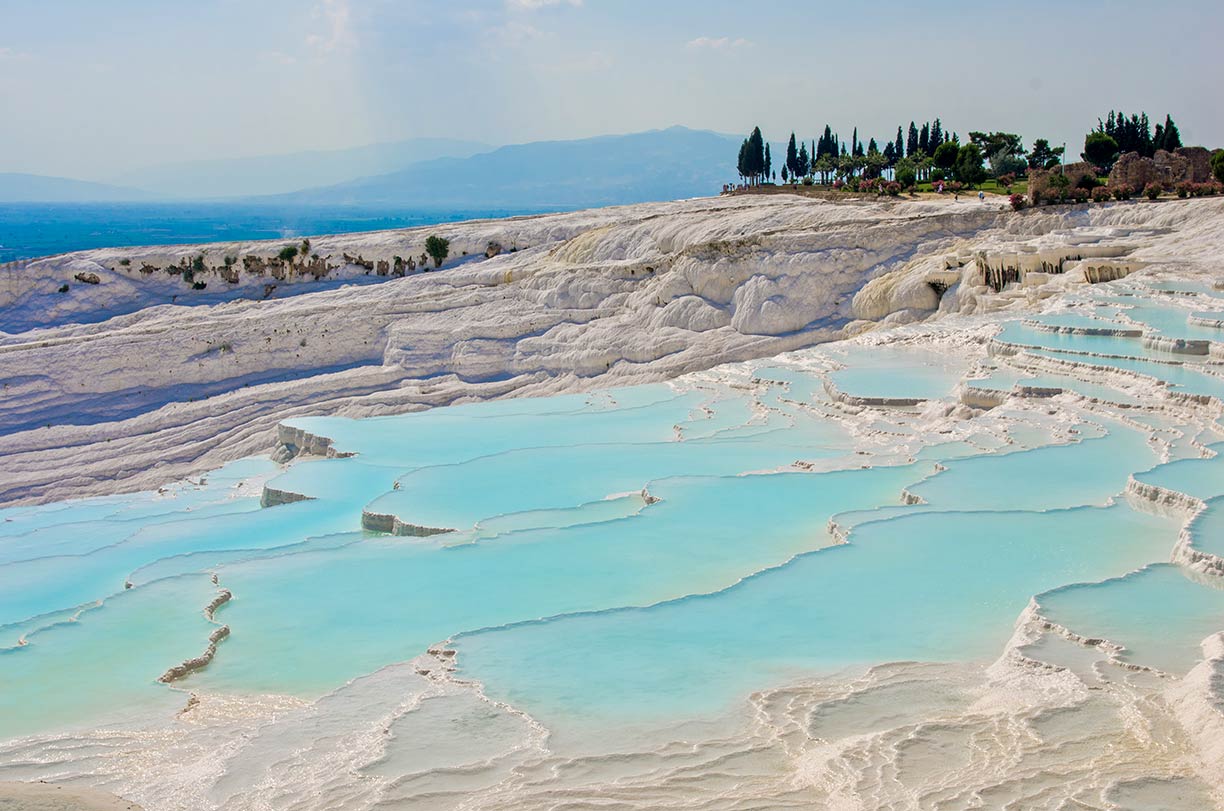 Travertine hot springs at Pamukkale in the Aegean region of Turkey. Hierapolis-Pamukkale is another UNESCO World Heritage Site the country.
Photo: Antoine Taveneaux

is a UNESCO World Heritage Site.
Adana, the largest city in the Mediterranean Region and capital of the Adana province.
Gaziantep, a city with an ancient history is situated about 120 km (75 mi) north of Aleppo, Syria. The city is famous for its gastronomy.
Konya, an industrial city in central Anatolia. Konya is famous for its Whirling Dervishes (Sufi). The city was the Seljuk capital (Sultanate of Rum) towards the end of the 11th century and became later the capital of the Ottoman province of Karaman Eyalet.
Antalya is located on Anatolia's southwest coast, known as the Turkish Riviera. Antalya province is the center of Turkey's tourism industry and one of the Mediterranean's leading tourism destinations.
Kayseri is an industrialized city in Central Anatolia, and the trailhead for the tourist attractions in Cappadocia.

The Map shows the location of following cities and towns of Turkey: