is a UNESCO World Heritage Site on the northern coast of the country's main island.
Image: Martin Falbisoner

Bahrain is an island nation in the Middle East. The archipelago consists of the main island (Al) Bahrayn and some smaller islands and islets. The island state is situated in an inlet of the Persian Gulf (Arabian Gulf) known as the Gulf of Bahrain, about 25 km (16 mi) to the east of the Saudi Arabian coast. Bahrain is connected to the Arabian Peninsula by a series of bridges and causeways named the King Fahd Causeway.

Area
With an area of 741 km², the island nation is slightly larger than Singapore (699 km²), or 3.5 times the size of Washington, DC. Like other wealthy island nations, Bahrain's area is growing due to land reclamation.

Bahrain's geography can be described as a flat, arid desert archipelago in the Persian Gulf; less than 3% of the country is arable land. Jabal ad Dukhan (Mountain of Smoke), the hill in the center of the Southern Governorate is the country's highest point at 134 m (440 ft).


Bahrain's islands
Bahrain Island (al-Awal Island), the country's main island is about 50 km (30 mi) long and 16 km (10 mi) wide. Muharraq is the name of a densely populated island and a city, situated northeast of Manama; to the north of Muharraq's urban area lies Bahrain International Airport. Hawar (Jazīrat Ḩawār) is an archipelago of 16 small desert islands situated off the west coast of Qatar; the main island is Hawar. The islands support one of the world's largest concentrations of the Socotra Cormorant. [2] Umm an Nasan is an island in the Gulf of Bahrain, linked with the main island by the King Fahd Causeway; it is privately owned and off limits to ordinary people.

Bahrain International Airport (IATA Code: BIA) is located on the island of Muharraq; it is Bahrain's only international airport. It is the primary hub for Gulf Air, the flag carrier of Bahrain. 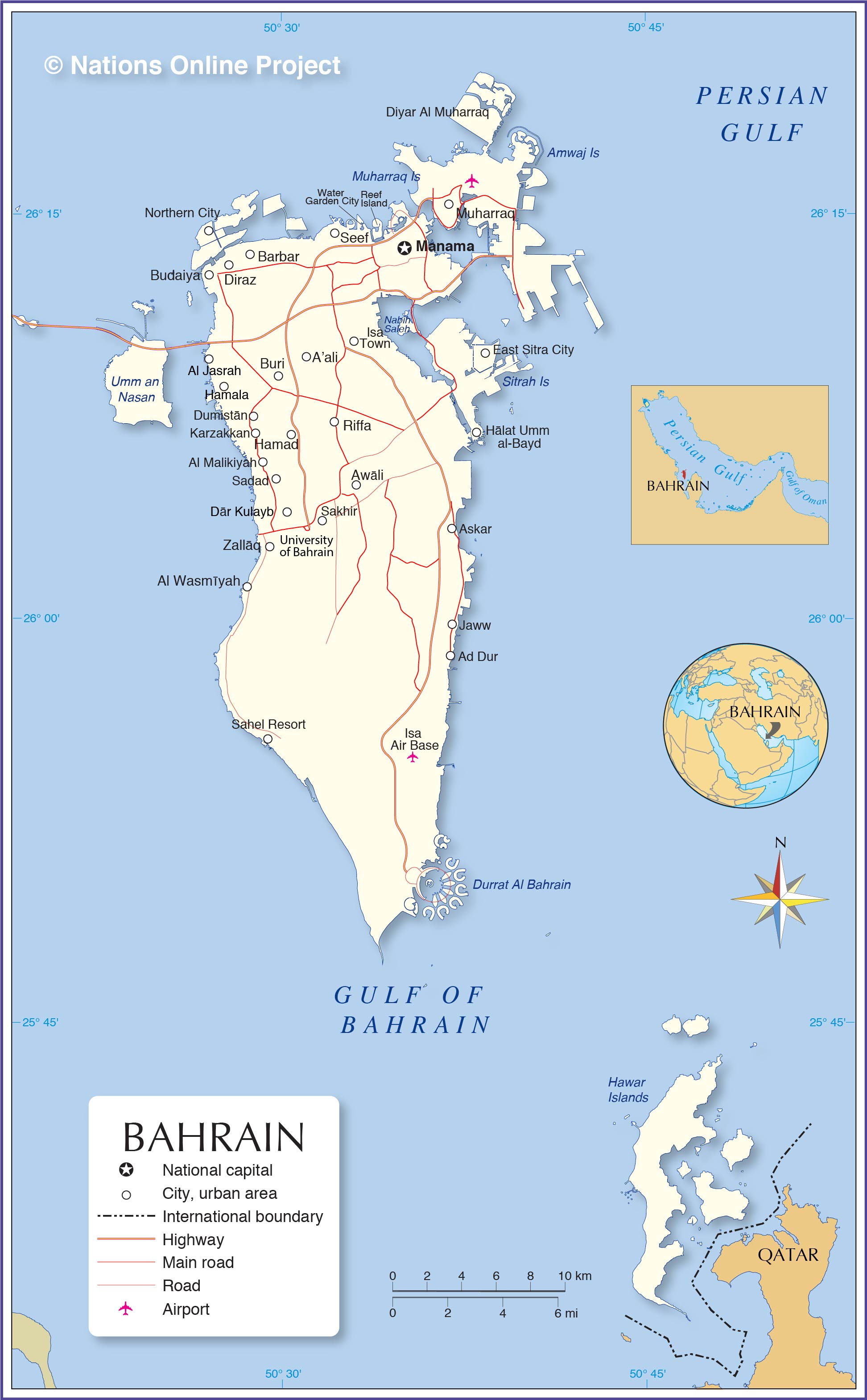 Political Map of Bahrain
The map shows Bahrain in the Gulf of Bahrain, with governorate boundaries, the national capital, major cities, and main roads. 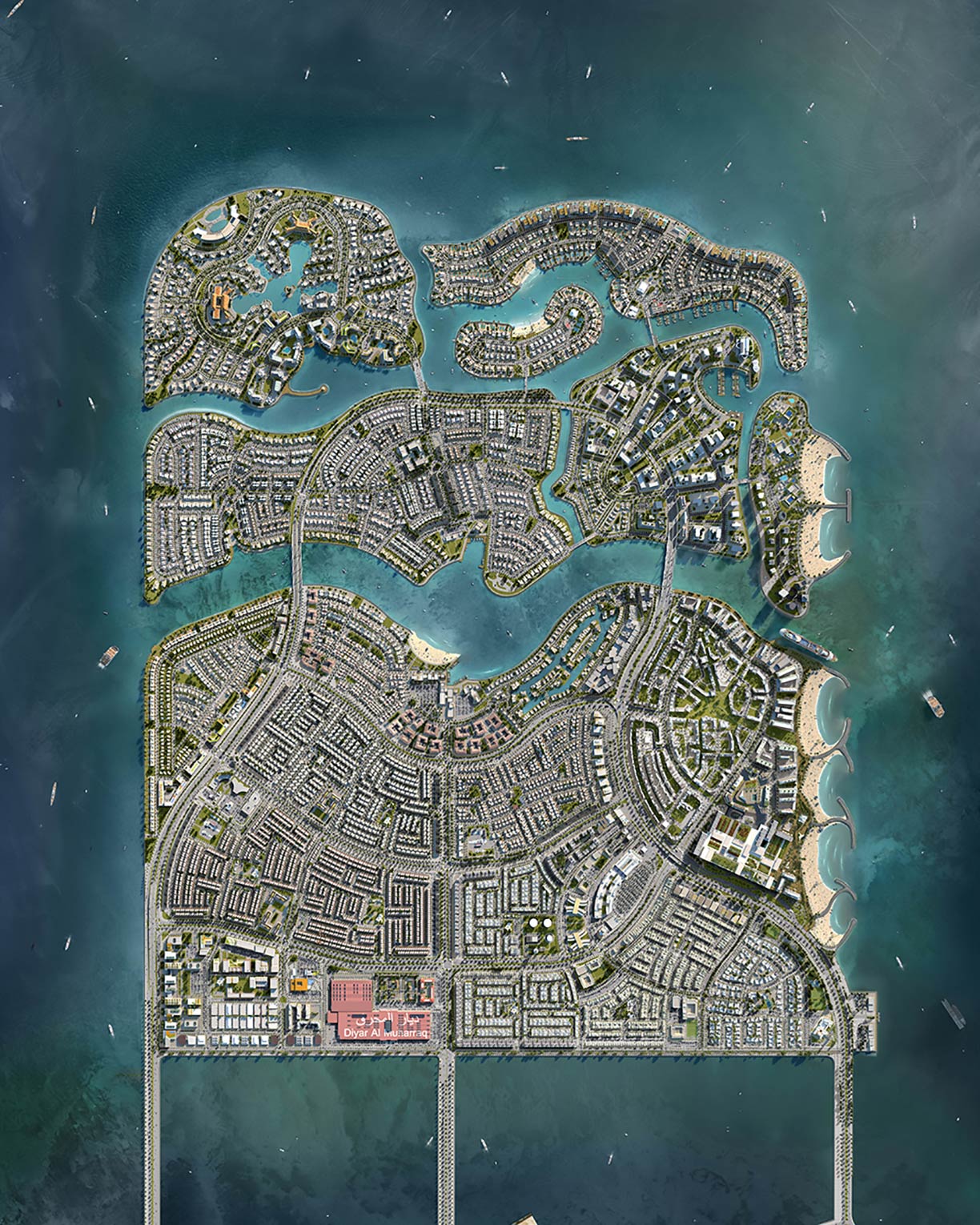 The map shows the location of following Bahrainian cities and towns:

Manamah (al-Manāma) is the capital and the largest city of Bahrain.

Riffa, the second largest city in Bahrain, is located in the center of the northern portion of the main island; it is famous for the Riffa Fort, a fortress overlooking the Hunanaiya Valley. The city is made up of West Riffa (Ar Rifa' al Gharbi) and East Riffa (Ar Rifa 'ash Sharqi).

Muharraq (Al Muharraq), Bahrain's third largest city is situated northeast of the capital; it is the location of Bahrain International Airport, the country's only international airport.

A'ali, the city is famous for its ancient burial mounds and its traditional handcrafted pottery.

Amwaj Islands
A group of man-made islands, a land reclamation project north-east of the airport offering waterfront properties. In the center sits the Lagoon Park, an artificial lagoon with coffee shops and restaurants.

Diyar Al Muharraq, the future city with commercial and residential facilities, will cover seven artificial islands of reclaimed land. First inhabitants moved to the islands in 2015.

Sahel Resort
Sahel Resort is a new five-star property under construction in the south-west coastal region of Bahrain. The secluded 'retreat' style venue will offer room and villa-based accommodation and a range of entertainment, leisure, and sports facilities, including restaurants, a cinema, a kids club, and meeting and conference services.

Other towns and urban areas:

Satellite View and Map of Bahrain