United Arab Emirates. Abu Dhabi is also the capital of the Emirate with the same name; one of seven emirates which form the United Arab Emirates (UAE). The city is situated at the coast of the Persian Gulf about 140 km (87 mi) by road, south west of Dubai (UAE) on an island, not unlike the location of New York's Manhattan. 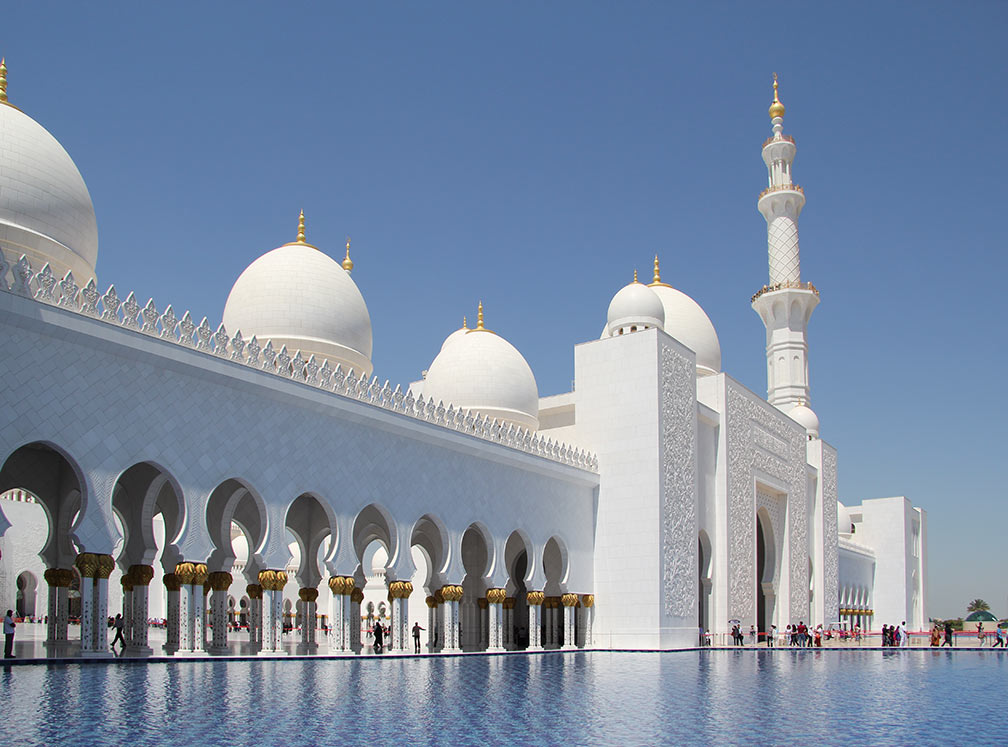 Sheikh Zayed Mosque in Abu Dhabi. The mosque is considered to be the centerpiece site for worship in the UAE.
Photo: FritzDaCat
The Emirate of Abu Dhabi became a British protectorate in 1892. In 1971 with the withdrawal of the British the Emirates gained independence. Al Karama should become the future capital of the newly formed United Arab Emirates; planned to be built on the border of the emirates of Abu Dhabi and Dubai. But the proposed city was never built, and Abu Dhabi became the official capital of the UAE in 1996.

Since then Abu Dhabi (city) is the seat of the President of the United Arab Emirates and the seat for the UAE government. It is also home for the Emirati Royal Family.

The city's rapid development and urbanization (probably also propelled by the rivalry between Abu Dhabi and Dubai), coupled with the relatively high average income of its population, has transformed Abu Dhabi to become more advanced than most other Arab cities.
Due to its position as the capital, the city is the country's leading political center and a growing industrial, cultural, and commercial site in the Emirates.

Estimated 1.8 million people live in the second-most-populous city in the United Arab Emirates (in 2018). The official language is Arabic, English is widely spoken.
Abu Dhabi has a semi-dry, tropical climate with hot summers, warm winters, and little rainfall.


Transportation
Abu Dhabi International Airport (IATA Code: AUH) is the hub for Etihad Airways, the country's flag carrier. The airport is located 33.7 km (21 mi) by road, east of the city center.
Public transport within Abu Dhabi city is carried out by public buses and taxis.
Zayed Port the deep-water port north of the city is currently under redevelopment as a primary luxury cruise ship terminal. 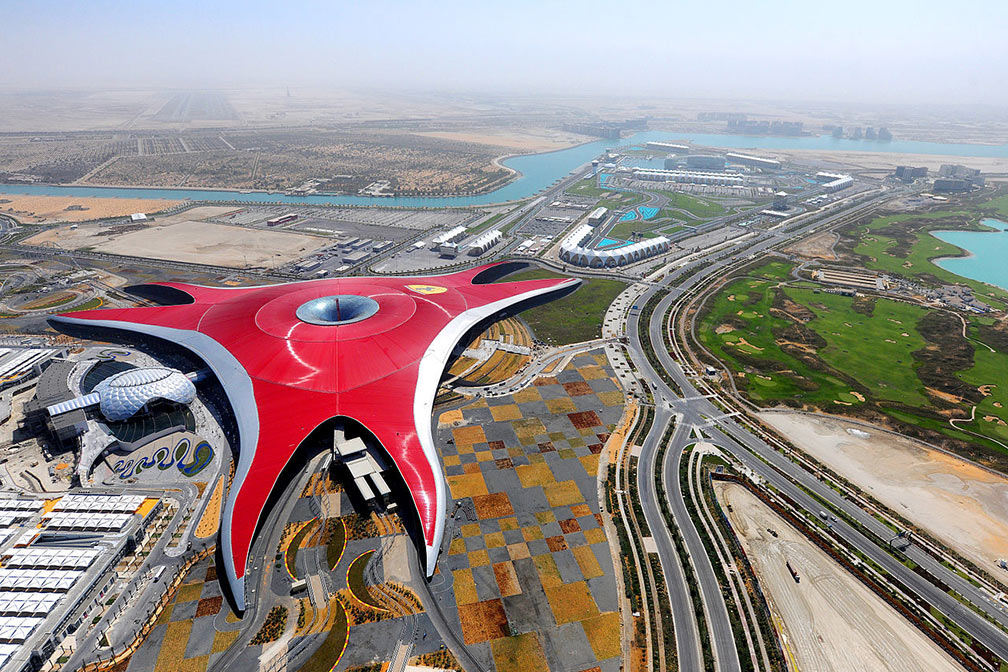 The map also shows the location of Sheikh Zayed Grand Mosque. The largest mosque in the United Arab Emirates was opened in December 2007. The mosque, covered with white marble from Italy and the Republic of Macedonia represents a fusion of Arab, Mughal and Moorish architecture. Inside the mosque is the "World's Largest Carpet" hand-woven by Iran's Carpet Company (ICC), the carpet is about the size of a soccer field, 5,625 sqm (60,546 sq.ft.).

Oldest and the main federal university is United Arab Emirates University (www.uaeu.ac.ae), located in Al-Ain (Abu Dhabi) about 160 km east of the capital on the border with Oman.

Long-standing cultural ties between the UAE and France is marked by the existence of the Paris-Sorbonne University Abu Dhabi (www.sorbonne.ae) and since 2017 the Louvre Abu Dhabi (www.louvreabudhabi.ae), the largest art museum in the Arabian peninsula.

Yas Island, multi-purpose leisure, shopping, and entertainment center under construction. There is a shuttle service to the island. Yas Mall (www.yasmall.ae) on the island is among Abu Dhabi's largest mall.
Ferrari World Abu Dhabi (www.ferrariworldabudhabi.com), a Ferrari-branded theme park with roller coasters and thrill rides, located on Yas Island.

Saadiyat Island, is a tourism and cultural precinct planned for nature, Emirati heritage and culture, the site is mostly under construction.

Louvre Abu Dhabi, one of the first museums in Saadiyat Island Cultural District, it opened in November 2017. Other planned museums are the Guggenheim Abu Dhabi, Zayed National Museum and a maritime museum.

Abu Dhabi Mall (www.abudhabi-mall.com), shopping in the heart of the city.