The Forum Romanum in Rome. The oldest Roman forum (piazza) was the center of the city's political, economic and cultural life and the setting for magnificent religious ceremonies.
Image: BeBo86 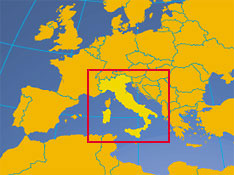 
Destination Italy, a Nations Online country profile of "Bella Italia" - beautiful Italy, how many Italians love to call their country.

Italy is located in southern Europe on the Apennine Peninsula. Its distinct shape, resembling a kicking boot, makes it easy to recognize it on maps or even from space.

Two of the largest Mediterranean islands belong to Italy, Sardinia in the west and Sicily in the south.
The country covers an area of 301,318 km² (116,340 sq. mi.), compared, it is about 80% the size of Japan or slightly larger than the U.S. state of Arizona.

Italy has a population of more than 59.6 million people (in 2020), the capital and largest city is Rome (Italian: Roma). Other major cities are Florence, Milan, Naples, and Venice. Spoken language is (only) Italian.

What is Italy famous for? 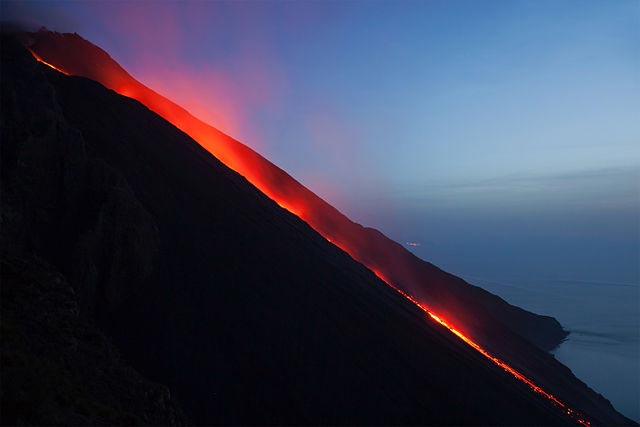 Caesar, Galileo and Columbus were Italians.

The world's first bank was in Genoa, Italy; the first casino was in the Palazzo Dandolo in Venice. The first public opera house opened in Venice in 1637.

The Italians invented other useful things such as the programmable calculator (Olivetti), the barometer, the battery and confetti, the cello, Italic typeface and Eau de Cologne. Eyeglasses originated in Italy and are now produced there by the millions (Luxottica).

Italy is famous for its food, like pizza, pasta, prosciutto, Parmesan cheese, salami, wine and ice cream (gelato).
There are several types of Italian coffee (espresso etc.) Venice, then a commercial metropolis, was one of the first European ports to import coffee beans in the 16th century. 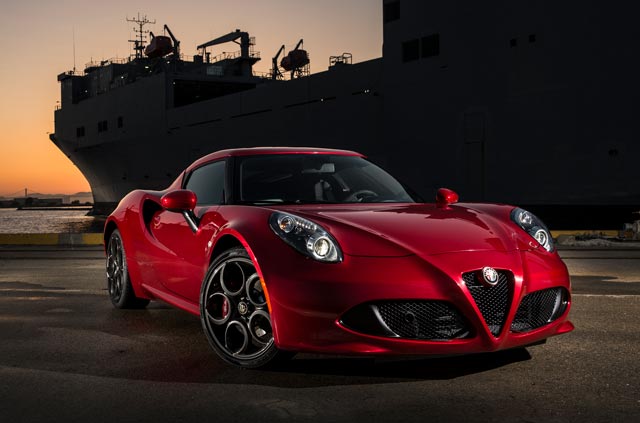 The antique architecture of the Romans, Italian Renaissance gardens, the Italian cities of Florence, Rome, Venice, Naples, and

Italian landscapes like the Amalfi Coast, Cinque Terre, Sicily, the Dolomites, Sardinia, Tuscany, the Riviera, and the Adriatic Sea coast.

Background:
Italy became a nation-state belatedly - in 1861, when the city-states of the peninsula, along with Sardinia and Sicily, were united under King Victor EMMANUEL.

An era of parliamentary government came to a close in the early 1920s when Benito MUSSOLINI established a Fascist dictatorship. His disastrous alliance with Nazi Germany led to Italy's defeat in World War II.

A democratic republic replaced the monarchy in 1946, and economic revival followed. Italy was a charter member of NATO and the European Economic Community (EEC). It has been at the forefront of European economic and political unification, joining the European Monetary Union in 1999.

Climate: Italy has a generally mild Mediterranean climate with cold winters in the north. 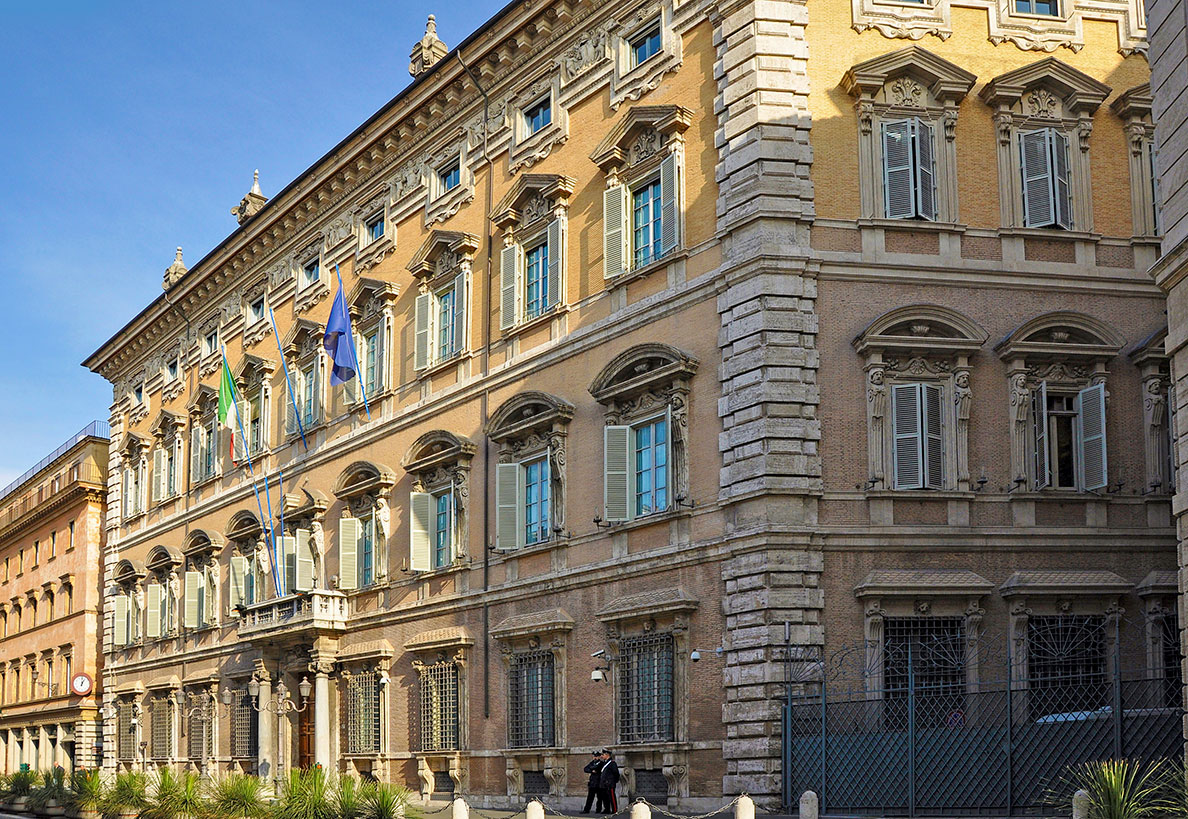 The Palazzo Madama in Rome is the seat of the Senate of the Italian Republic.
Image: Paul Hermans

Italy is a parliamentary republic since June 1946, when the monarchy was abolished. The Italian parliament is a bicameral legislature that consists of the Senate of the Republic (Senato della Repubblica) and the House of Representatives (Camera dei deputati).
Executive power is exercised by the Council of Ministers, which is headed by the Prime Minister. Head of State is the President.

Governo Italiano
Official website of the Italian Government and the office of the President of the Council of Ministers, Italy's Prime Minister. 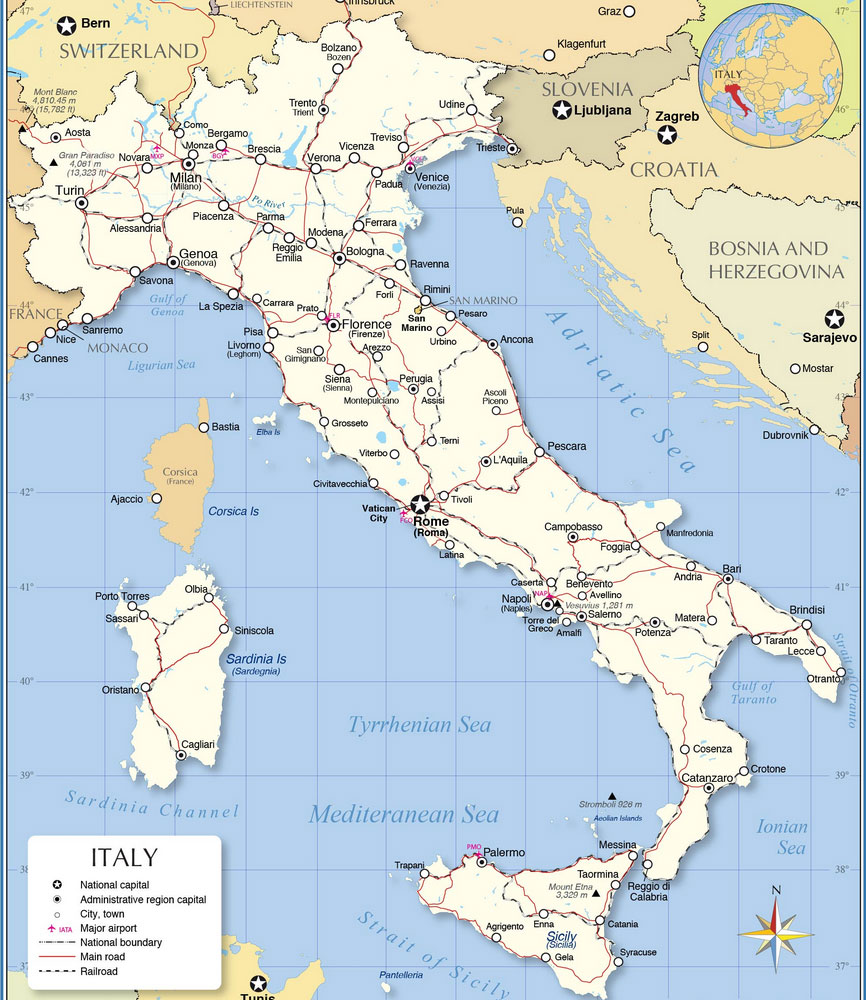 
Italy's mix of politics and media has often made headlines at home and abroad. Concerns have regularly been raised about the concentration of media ownership in the hands of one man - former Prime Minister Silvio Berlusconi. [1]
About 20 Italian journalists are currently receiving round-the-clock police protection because of serious threats or murder attempts by the mafia. The level of violence against reporters keeps on growing, especially in Rome and the surrounding region, and in the south. [2]

Corriere della Sera
Italy's most influential newspaper with national and international news (in Italian and English). 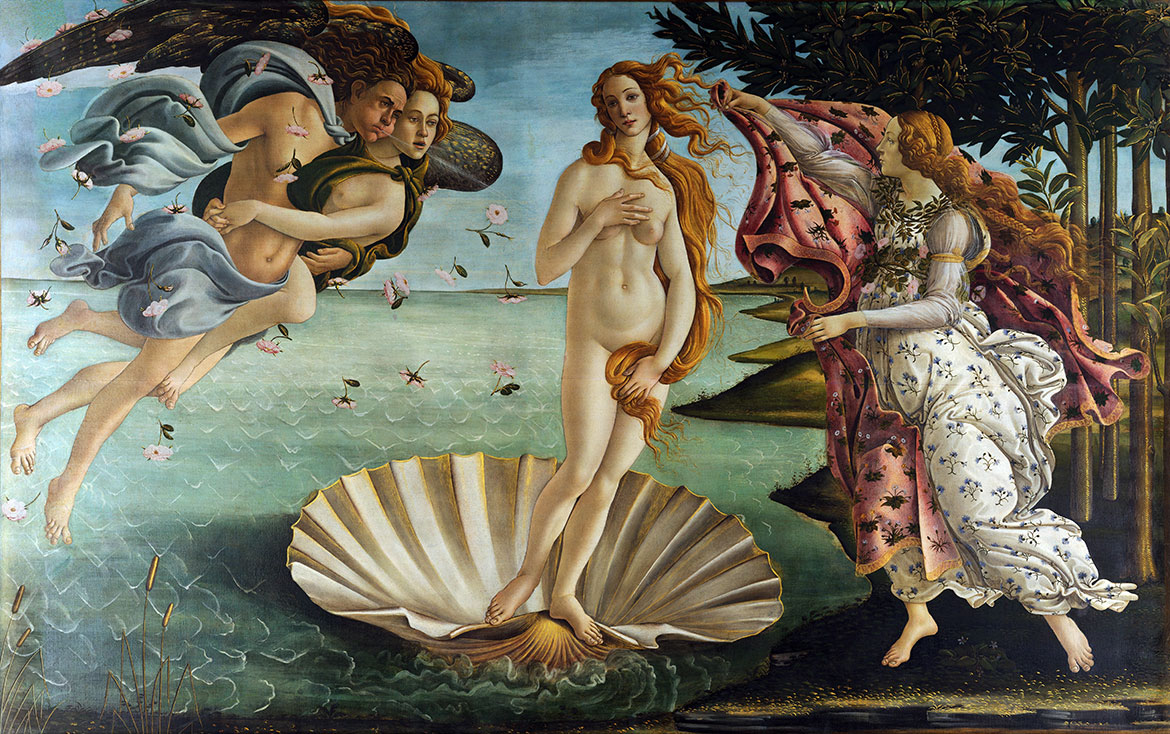 Birth of Venus, possibly the most famous painting by Sandro Botticelli, the Italian painter of the Early Renaissance. The painting is on display at the Uffizi Gallery in Florence, Italy.

Galleria dell'Accademia
The art museum in Florence is best known as the home of Michelangelo's sculpture David.

Opera
Teatro alla Scala, Milano
The opera house in Milan is one of the world's most famous theaters.

Teatro La Fenice
The Opera of Venice, founded in 1792, reopened in December 2003 after it was almost destroyed by fire in 1996.

Arena di Verona
The Arena of Verona is a Roman amphitheater now used for the annual Opera Festival. The arena has also hosted several concerts of international rock and pop bands in recent years.

The port of Genoa is an important sea port in the northern Italian city of Genoa. It is the busiest cargo port in Italy and an important port of call for cruise ships.
Image: Alessio Sbarbaro


Italy's Economy
Italy's advanced economy is the 3rd-largest national economy in the European Union. Italy's business model is based on the production of high-quality consumer goods. The most significant industrial sectors in Italy are the automotive industry (Fiat), textiles, electrical products, office equipment, agriculture, and tourism.


Banca d'Italia
Banca d'Italia (also known as Bankitalia) is the central bank of the Italian Republic, an integral part of the European System of Central Banks (ESCB) since 1998.

Unioncamere
The Italian union of chambers of commerce, Unioncamere, is the public body that represents the Italian chamber system vis-à-vis territorial, national, and international governing bodies.

Meridiana
Privately owned Italian airline with its main base at Olbia Costa Smeralda Airport in Olbia, Sardinia. The airline ceased operations in February 2018. 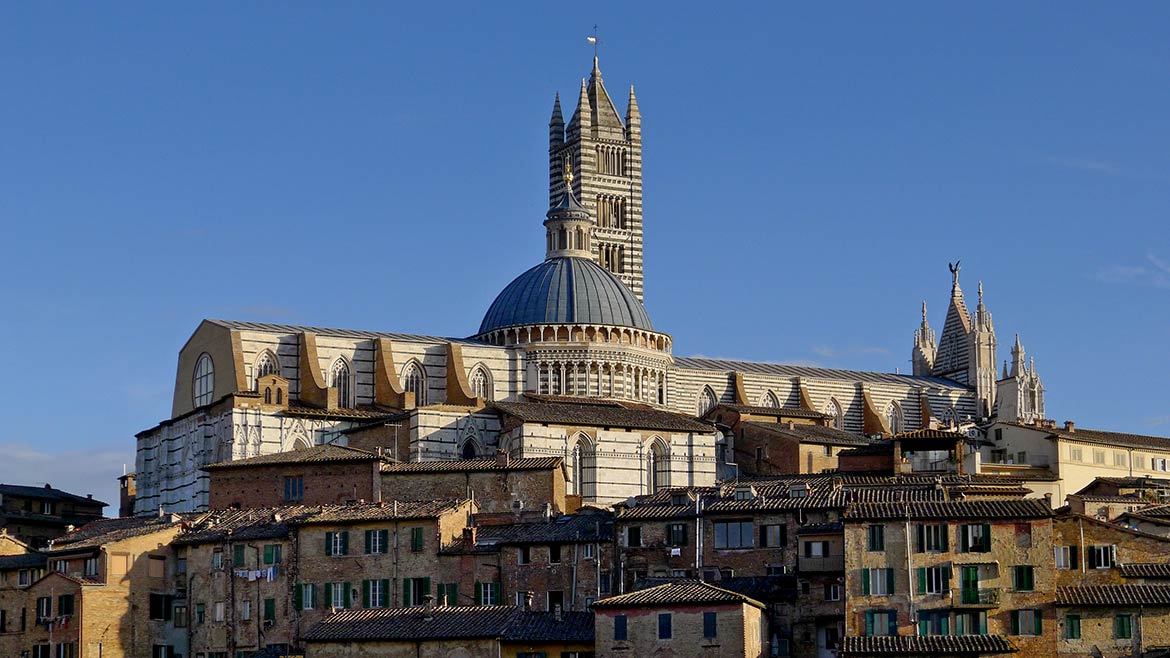 Siena Cathedral (Duomo di Siena) is a medieval church in the center of the city of Siena in Italy’s Tuscany region. The Historic Centre of Siena has been a UNESCO World Heritage Site since 1995.
Image: Jörg Bittner 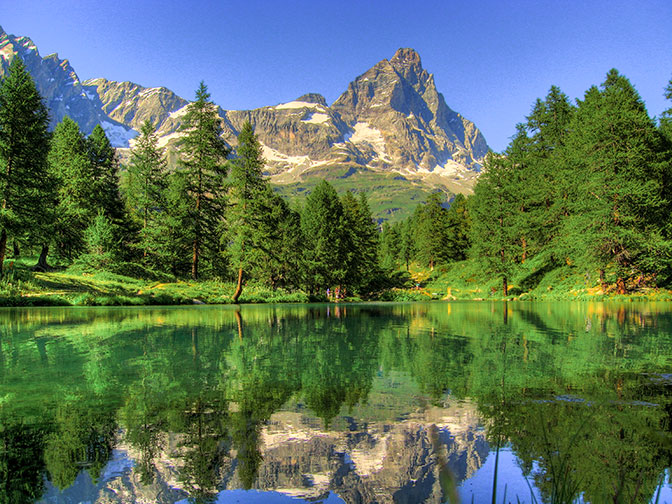 Lago Blu and the Matterhorn (Cervino) in the Aosta Valley.
Image: Ventofreddo


Abruzzo
Abruzzo is a mountainous region in central Italy, but through its culture, language, history, and economy, it belongs to southern Italy.

Aosta Valley
Valle d'Aosta is a mountainous autonomous region in northwestern Italy. The Alpine valley is the smallest and least populous region of Italy and home to the Italian part of the Mont Blanc, Monte Rosa, Gran Paradiso, and the Matterhorn (Cervino).

Basilicata
Basilicata is a region in Southern Italy and an emerging tourist destination. The Sassi and the Park of the Rupestrian Churches of Matera in the region's capital are a UNESCO World Heritage Site.

Calabria
The Calabria region occupies a peninsula, the "boot tip" of boot-shaped Italy. Its capital is Catanzaro.

Campania
Campania is a region in the southwestern portion of the Italian Peninsula; the largest city and capital is Naples. Campania is home to nine UNESCO World Heritage Sites.

Emilia-Romagna
Emilia-Romagna lies between the River Po to the north, the Apennine Mountains to the south, and the Adriatic Sea to the east. Its capital is Bologna; other renowned cities are Modena, Ravenna, Ferrara, Parma.

Lazio
Lazio is a region in central Italy, with Rome as its capital.

Liguria
Crescent-shaped Liguria in north-western Italy borders the Ligurian Sea to the south and France to the west. Its Mediterranean coastal areas are known as the Riviera. The regional capital is the port city of Genoa. 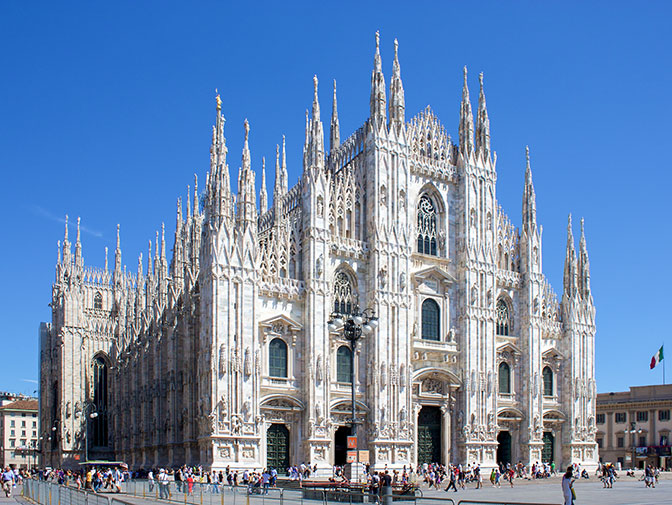 
Lombardy
The region encompasses the main part of the Po Valley. The cultural and economic capital is Milan.

Marche
Marche is a region in the central area of the country, bordering the Adriatic Sea and San Marino; Marche's capital is the seaport of Ancona.

Molise
Molise is a small mountainous region in Southern Italy. (in Italian)

Piedmont
In terms of area, Piedmont is the largest region of mainland Italy; it borders Switzerland to the north and France to the west. The regional capital is Turin.

Puglia (Apulia)
Puglia is a region in southeast Italy with the capital Bari. 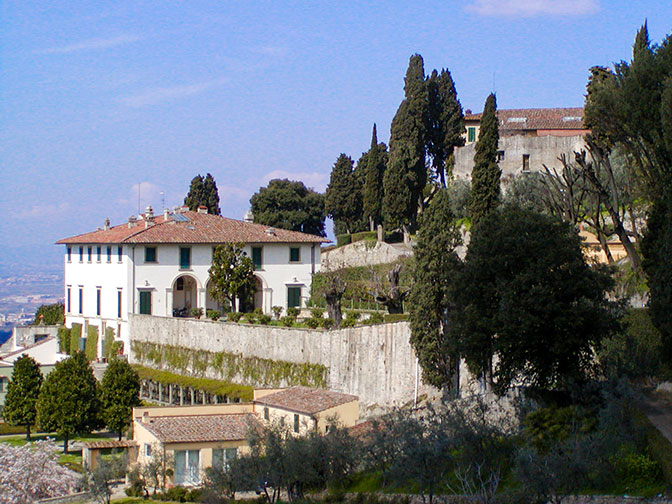 Villa Medici in Fiesole. The villa is the site of the oldest existing Italian Renaissance garden.
Image: Donata Mazzini


Tuscany
Hilly Tuscany is located in the western part of central Italy and borders the Tyrrhenian Sea. Tuscany was the birthplace of the Italian Renaissance and is home to famous cities like Florence, Pisa, and Siena.

Umbria
Situated in central Italy, Umbria is the only region in Italy that has neither a sea coast nor a border with a foreign country.

Veneto
The region includes the eastern part of the Po Valley and a part of the Dolomites in the north; it borders the Adriatic Sea in the southeast. The region's capital is Venice.

Cities and Regions in Italy 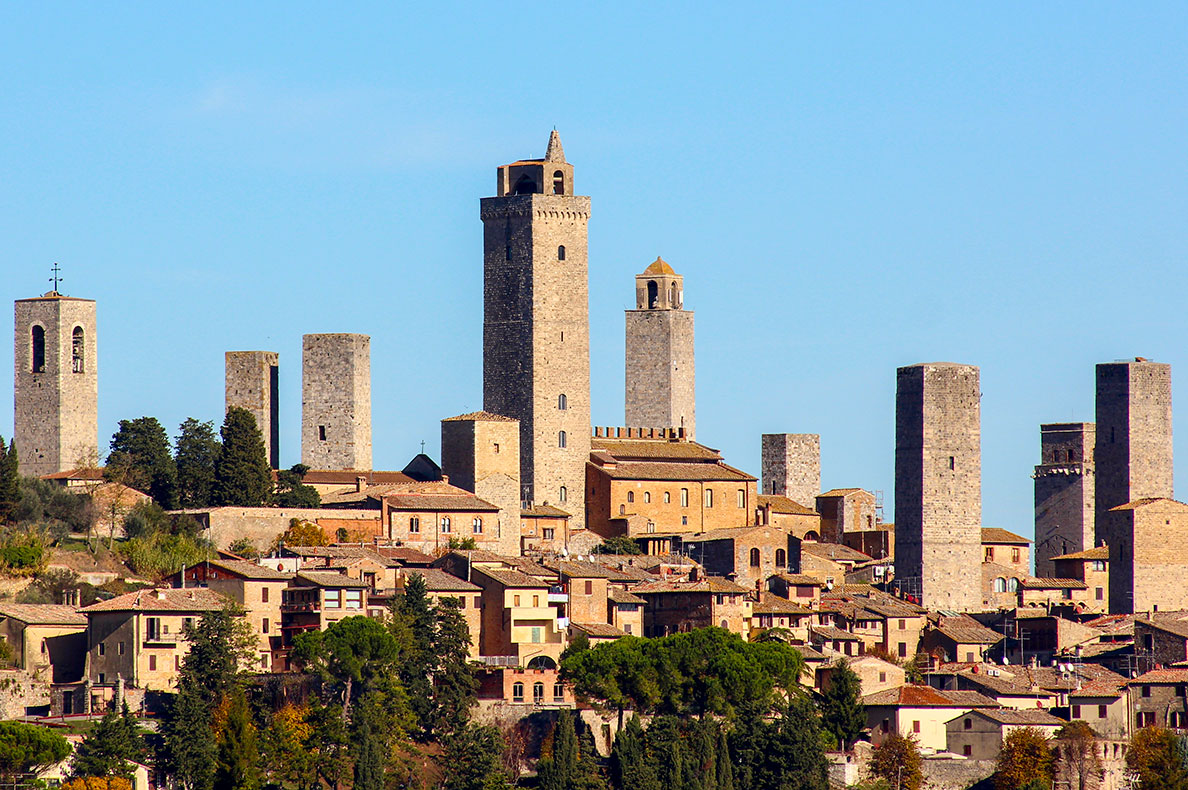 Historic Centre of Rome, the Properties of the Holy See in that City Enjoying Extraterritorial Rights and San Paolo Fuori le Mura
The historic district of Rome was declared a World Heritage Site by UNESCO in 1980. Within the urban area are 25.000 important archaeological sites and locations.

Castel del Monte
The Castel del Monte near the port city of Bari in Apulia is one of the most famous Staufer castles in Italy; it was built during the reign of Frederick II in the middle of the 13th century.

Royal Palace at Caserta
The city of Caserta, north of Naples, is home to the Royal Palace, the Aqueduct of Vanvitelli, and the Royal Summer Palace of San Leucio Belvedere. The monumental complex was created in the mid-18th century by the Bourbon King Charles III on the model of the Palace of Versailles. 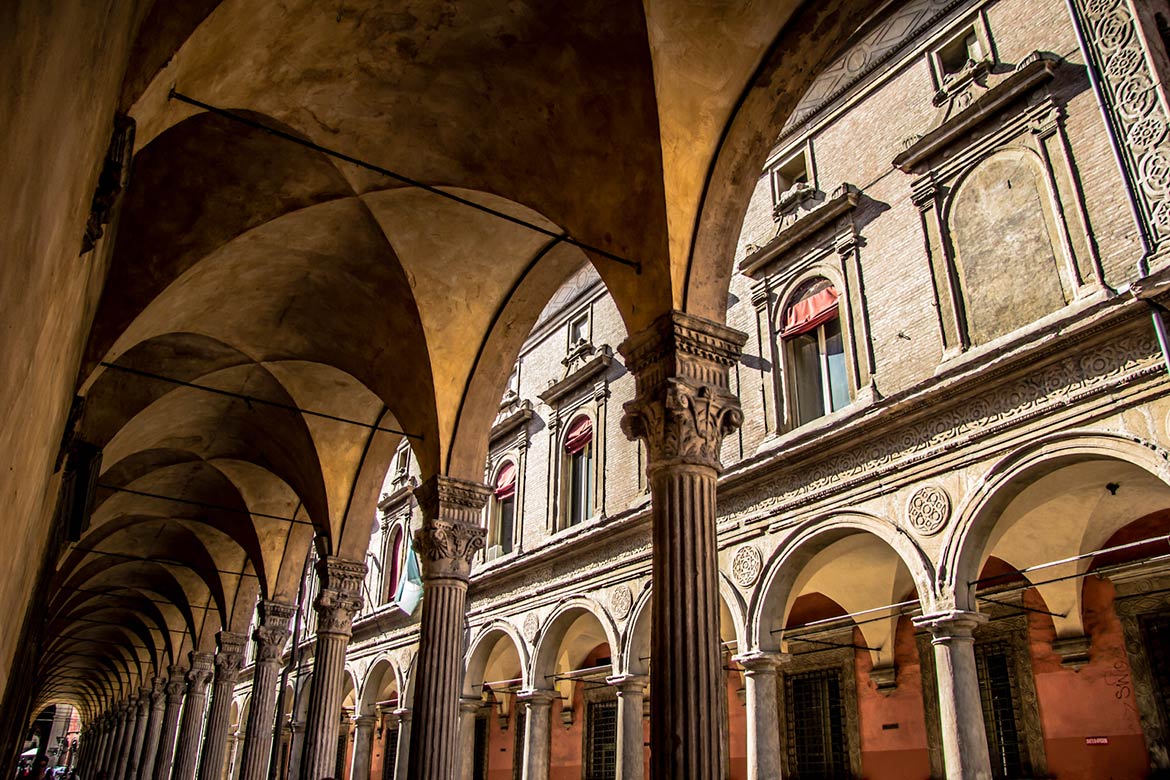 Via Zamboni in Bologna, the portico of the Basilica of San Giacomo Maggiore (left) and Palazzo Malvezzi Campeggi, which houses the Law Faculty of the University of Bologna.
Image: Adriana verolla 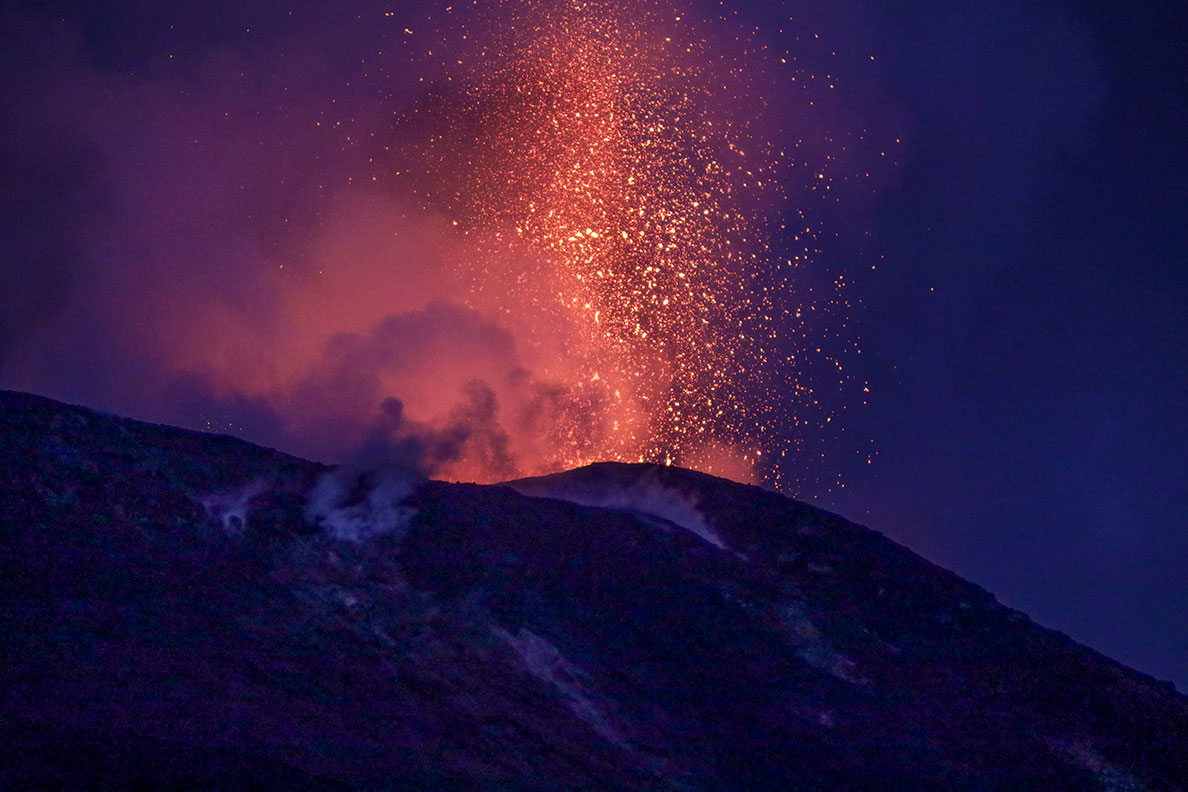 Stromboli is a small island off the northeast coast of Sicily that consists only of the volcano with the same name. The island is the relatively small peak of the volcano Stromboli which rises about 3000 m from the seafloor.
On 30 August 2019, the Civil Protection Department raised the alert from yellow to orange, due to increased activities of the volcano.
Image: Dipartimento Protezione Civile


Environmental Organizations
Legambiente
Legambiente is part of the International Union for Conservation of Nature and the largest Italian environmental NGO.
LIPU - Lega Italiana Protezione Uccelli
Italian Association for the Protection of Birds. (in Italian)
Terra Nuova
The Rome based Terra Nuova focuses on promoting equitable and sustainable socio-economic development in various African and Latin American countries.

Google Map Mount Vesuvius
Searchable map and satellite view of Mount Vesuvius showing the volcano near Naples and the location of Pompeii and Herculaneum. 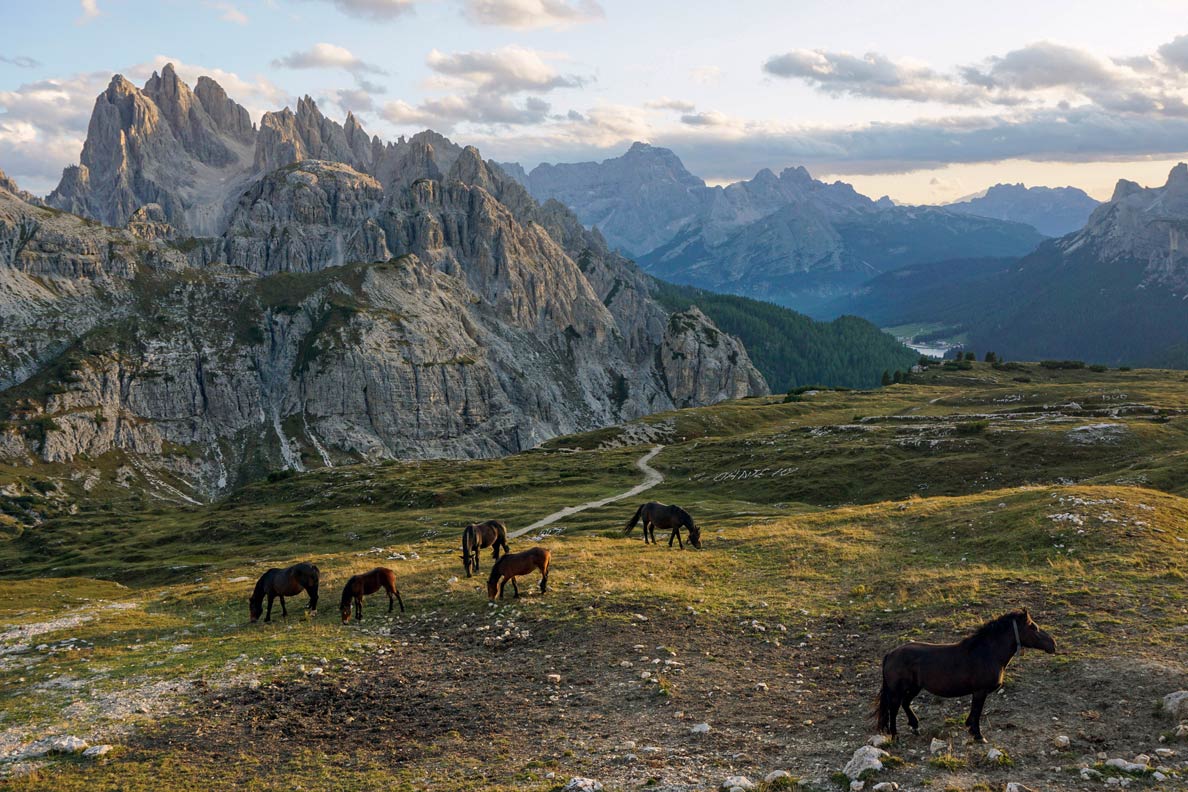 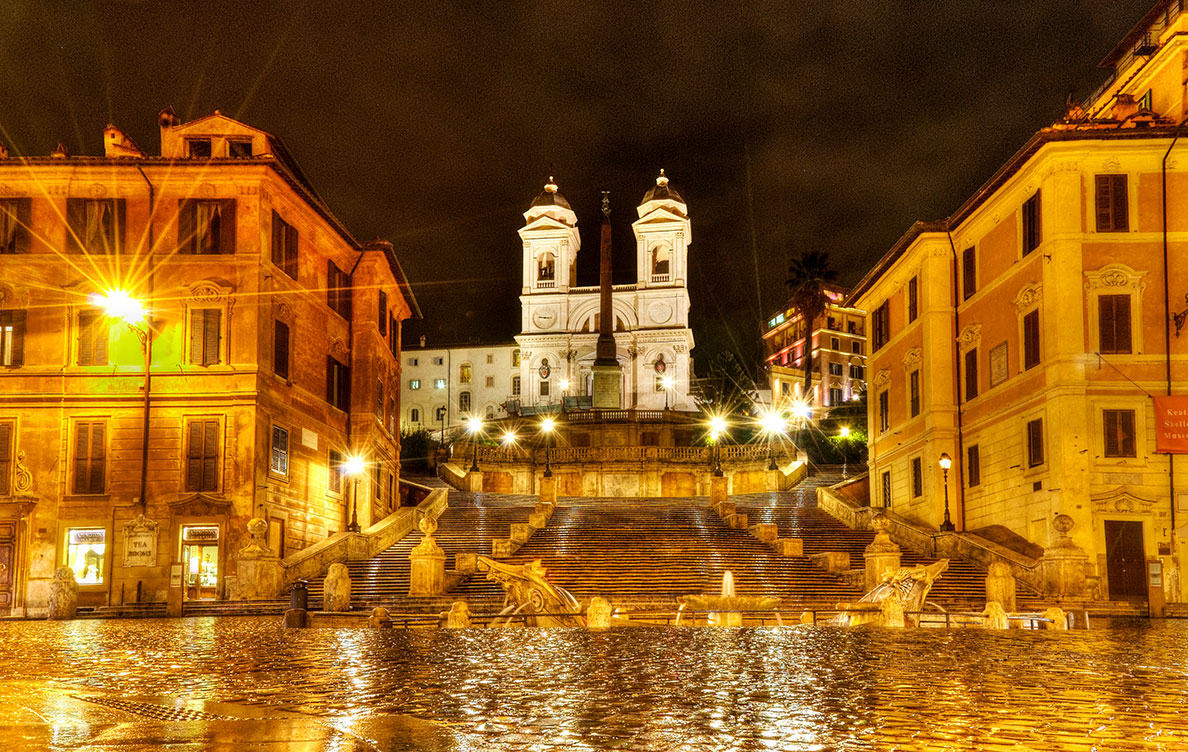 The famous Piazza di Spagna in Rome with view of the Spanish Steps, Fontana della Barcaccia (fountain) in the foreground. Above the stairs is the French-built church and convent of Santissima Trinità dei Monti.
Image: Emilio García

Digital Forum Romanum
Research and teaching project of the Winckelmann-Institut of the Humboldt-Universität of Berlin.

Imperium Romanum
Wikipedia site with information about the Roman Empire and Roman history and culture.


Italian History Index
WWW Virtual Library Resources produced in Italy together with other world-wide resources that deal with the history of Italy.

FAO: Italy
The Food and Agriculture Organization (FAO) is a UN agency that leads international efforts to defeat hunger.