The Americas and the Caribbean

Satellite View and Map of the City of San Juan, Puerto Rico

The satellite view shows San Juan, the most populous municipality, chief port, and capital of

Puerto Rico, an island in the Caribbean. San Juan is situated in the north-eastern part of the island at San Juan Bay on the Atlantic coast, it is named after San Juan Bautista (Saint John the Baptist). Actually, the settlement was first known as Puerto Rico (Spanish for Rich Harbor) and the island as San Juan. 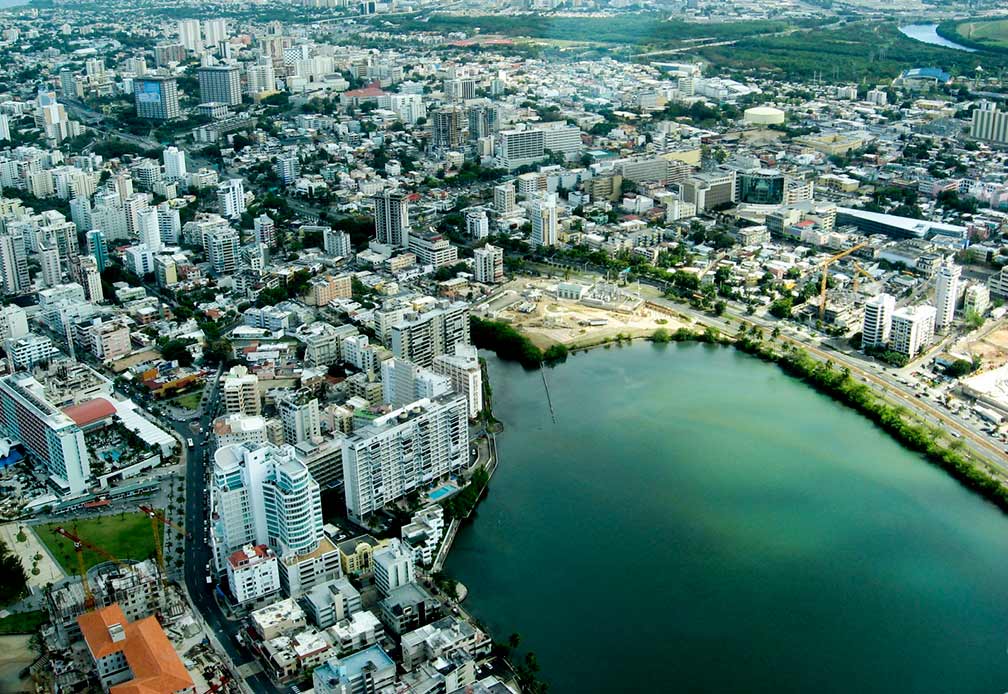 Aerial view of Santurce, one of the 18 districts (or barrios) of San Juan and its most populated.
Image: ethorson
San Juan is a city with a rich Spanish heritage. Christopher Columbus 'discovered' the island more than 500 years ago, in 1493. Soon after, Spanish colonists arrived and established a settlement in 1508. That first settlement was abandoned, and the colonists moved to the Islet of Puerto Rico (now Isleta de San Juan) in 1521 to establish a new town which they named 'Villa de Puerto Rico.' Making it the second oldest European-established city in the Americas, after Santo Domingo, in the Dominican Republic.

Today San Juan is inhabited by about 355,000 people (est. 2015), 2.5 million live in its metropolitan area (2010). It is the second most populous city in the Caribbean, only surpassed by Santo Domingo. Official languages are Spanish (Puerto Rican Spanish) and English.

The city is the island's core for almost anything. San Juan is Puerto Rico's most important seaport; it is one of the busiest ports in the Caribbean and Latin America.
Transportation, manufacturing, banking, and tourism are the economic muscle of the city and the nation. The University of Puerto Rico with its 11 campuses and about 58,000 students is based in San Juan. 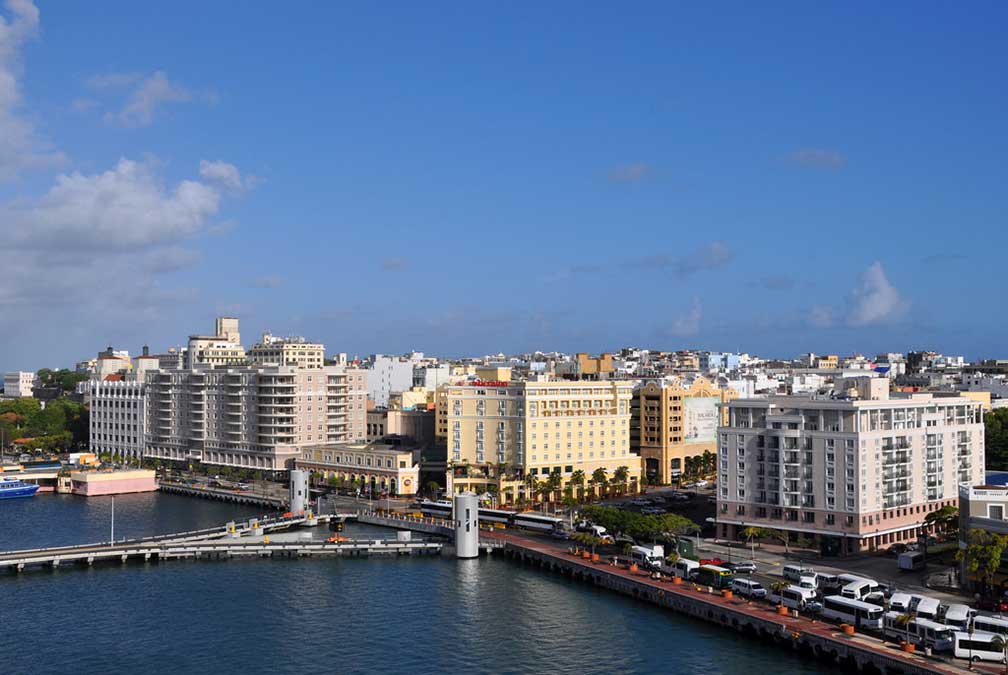 Aerial view of Old San Juan cruise terminal at Calle Marina.
Image: James Willamor
One of the city's main tourist attractions is Old San Juan (Viejo San Juan) on the Isleta de San Juan. It is the heart of the historic part of the city with its colonial buildings lining narrow streets, and its long-standing defensive walls and forts of Puerto Rico built to protect the city and the Bay of San Juan from English and Dutch attacks. El Morro (Castillo San Felipe del Morro) was the first fortification on the island, construction of the citadel began in 1539, and there is the 16th-century citadel, the Castle of San Cristóbal (Castillo San Cristóbal), built between 1765–1783, it was the largest fortification ever constructed by the Spanish in the Americas. Large sections of the Old Town are now part of the San Juan National Historic Site (nps.gov/saju/), managed by the National Park Service. Both citadels, the Castillo San Felipe del Morro, and the Castillo San Cristóbal are UNESCO World Heritage Sites (whc.unesco.org/en/list/266).
La Fortaleza (Palacio de Santa Catalina), the official residence of the Governor of Puerto Rico was built between 1533 and 1540.

Visual arts:
Museum of Art of Puerto Rico - MAPR, art museum and home of Puerto Rican art, showcased in the building of the former municipal hospital (mapr.org).
Puerto Rico Museum of Contemporary Art - MAC, the museum features art created since the mid-twentieth century to the present in Puerto Rico, the Caribbean, and Latin America (mac-pr.org)

Beaches:
Ocean Park, an upscale beachfront community with its single-family homes, small guesthouses, Bed & Breakfast Inns, cafes and pubs. The beaches at Isla Verde and Condado, tree-lined oceanfront with a pedestrian-oriented community in Santurce east of the historic colonial district and west of the international airport.

Churches:
Cathedral of San Juan Bautista is one of the oldest churches in the western hemisphere. The Neoclassical style cathedral was built in 1540. San José Church, located in the historic colonial section of Old San Juan, is an example of one of the oldest Gothic-influenced religious buildings constructed by the Spanish in the Americas.

Political Map of the Caribbean