Satellite View and Map of the City of Montpellier (Occitan: Montpelhièr), France

Promenade du Peyrou with the Water Tower (constructed in 1768) and an equestrian statue of King Louis XIV cast in bronze.
Image: Danichou 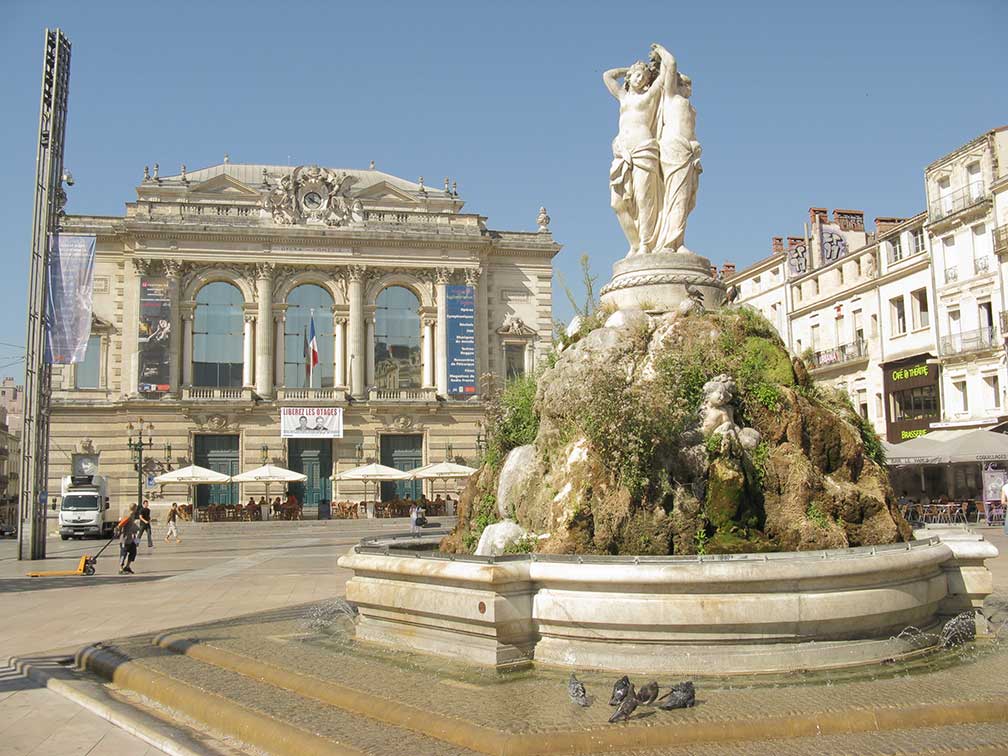 Theater and fountain in the Place de la Comédie in Montpellier.
Image: Demeester

The map shows Montpellier, a major city in southern

France. The seat of the prefecture of Hérault department is situated in the French Midi region, at the coast of the Mediterranean Sea, about 170 km (105 mi) west of Marseille.

The city was founded in the eighth century CE around a Benedictine abbey; it was ruled by the counts of Toulouse until the 13th-century when it passed to the king of Majorca.
The town developed into a trading center due to its position on one of the vital trade routes between the Mediterranean Sea and the mountain ranges of the Cévennes, the Pyrenees, and the Alps. Montpellier was a Huguenot (Protestants) stronghold during the French Wars of Religion. The city was witness to the 'Treaty of Montpellier,' that ended hostilities between French royalists and the Huguenots in 1622. The 19th century saw the city developing into an industrial center.

Today Montpellier is a major industrial and transportation center. The LGV Nîmes–Montpellier, a high-speed railway line, is under construction and fully operational in 2019. The city's main railway station is Saint-Roch. 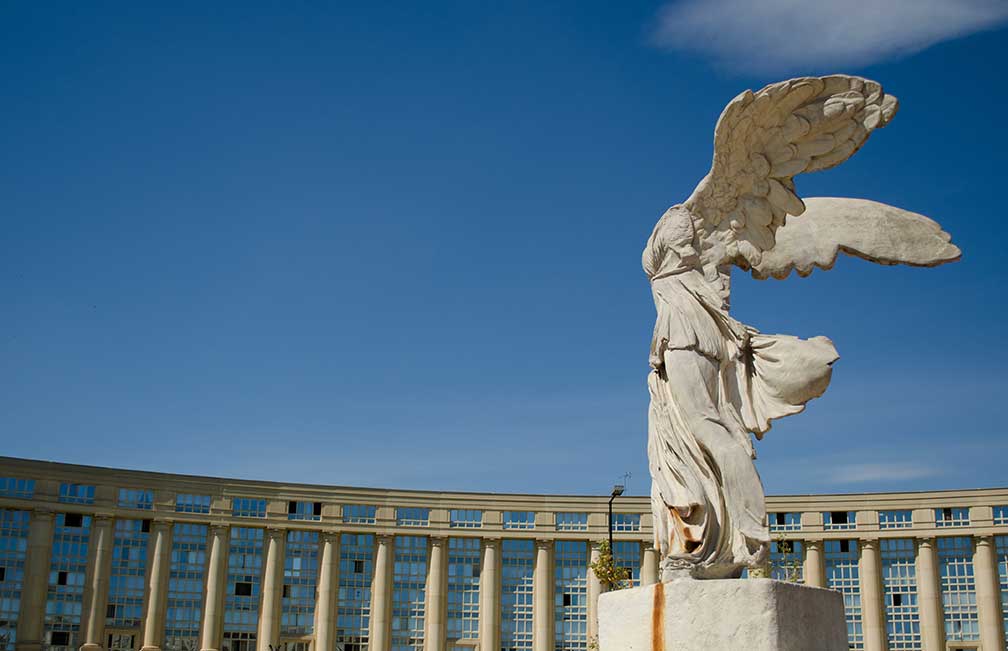 The Antigone district of Montpellier, the statue is a copy of the 'Winged Victory of Samothrace', the original of the winged Goddess of Victory (Nike), a masterpiece of Hellenistic art is in the Louvre Museum in Paris.
Image: Arnaudinvictus


The city has a population of about 276,000 residents (in 2013), about 440,000 people live in Montpellier's metropolitan area (Montpellier Méditerranée Métropole).

Climate
Montpellier has a Mediterranean climate, with hot and dry summers and mild winters.

Places:
Écusson, the old town of Montpellier with its medieval roots is a maze of small windy streets. 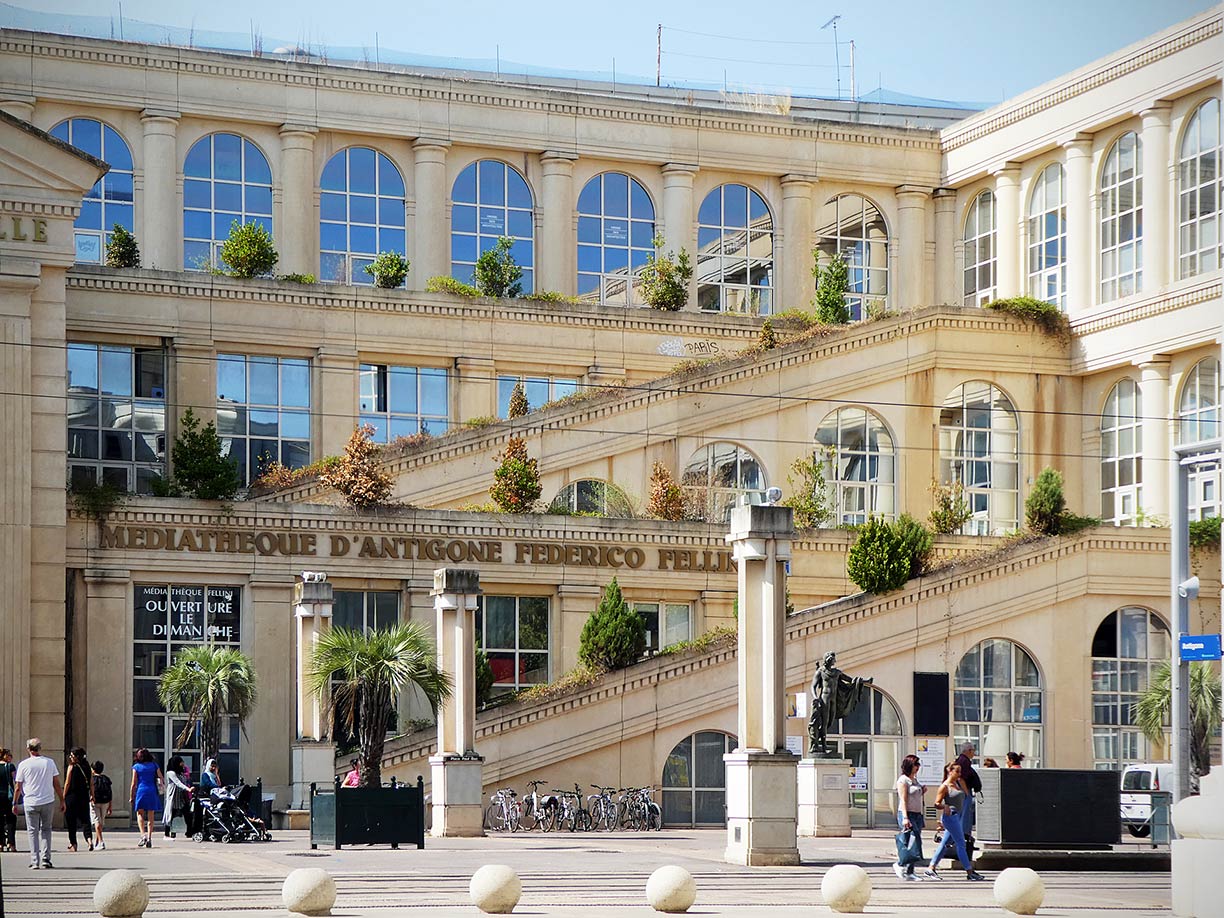 Antigone, the Antigone district is a newly-created neo-classical neighborhood of Montpellier; it is best known for its design by Catalonian architect Ricardo Bofill.

Promenade du Peyrou is a late 17th-century esplanade with a water tower monument and a bronze equestrian statue of King Louis XIV.

Château de Flaugergues (www.flaugergues.com) is a mansion-style house with gardens and a rare collection of Flemish tapestries.

Museums:
Musée Fabre (museefabre.montpellier3m.fr) is the principal museum of fine arts in Montpellier; it was established in 1825, the museum ​possesses a comprehensive collection of paintings from the 17th until the 19th-century.
Carré Sainte Anne, contemporary art exhibits in a deconsecrated Gothic church.

Opera:
Opéra Comédie (www.opera-orchestre-montpellier.fr) is located at Place de la Comédie; it was established in 1755; the institution has the status of a "National Opera."

Churches:
Cathédrale Saint-Pierre de Montpellier is a Roman Catholic church and the seat of the Archdiocese of Montpellier; the cathedral was rebuilt in the 17th-century.

Parks:
Les Jardin des Plantes, is a park and arboretum, the green space was established in 1593, it is France's oldest botanical garden.


The map shows a city map of Montpellier with expressways, main roads, and streets, and the location of Montpellier–Méditerranée Airport (IATA code: MPL) located about 11 km by road (via Avenue Pierre Mendès-France) southeast of the city.