Satellite View and Map of the City of Nantes, France

Château des ducs de Bretagne. The castle was the residence of the Dukes of Brittany between the 13th and 16th centuries, it later served as the center of the historical province of Brittany until its separation in 1941.
Image: Pierre Lindenbaum 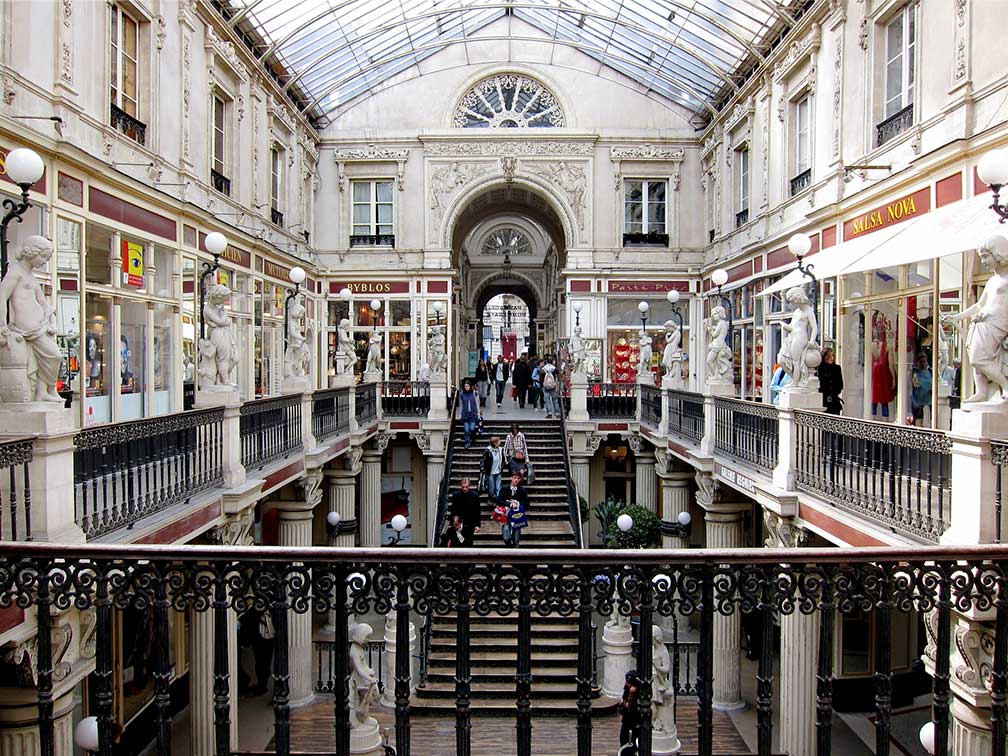 
The map shows Nantes, the 6th largest city in France, a river port, and the historic capital of the Duchy of Brittany (Bretagne) in western

The capital of the Pays de la Loire region and the Loire-Atlantique département is located on the banks of the Loire River about 46 km (29 mi) east of the Atlantic coast.

The Pays de la Loire region has a Western European oceanic climate with frequent rainfalls throughout the whole year, with mild temperatures in summers, and cool to cold winters.

The center of the ancient Namnetes of Gaul became later a major trading center under Rome.
In the 10th-century it was the residence of the dukes of Brittany, until 1498 when it was joined to France through the marriage of Anne of Brittany to King Louis XII of France.
In World War II Nantes was a center of the French Resistance (La Résis) to the occupation of France by Nazi Germany. 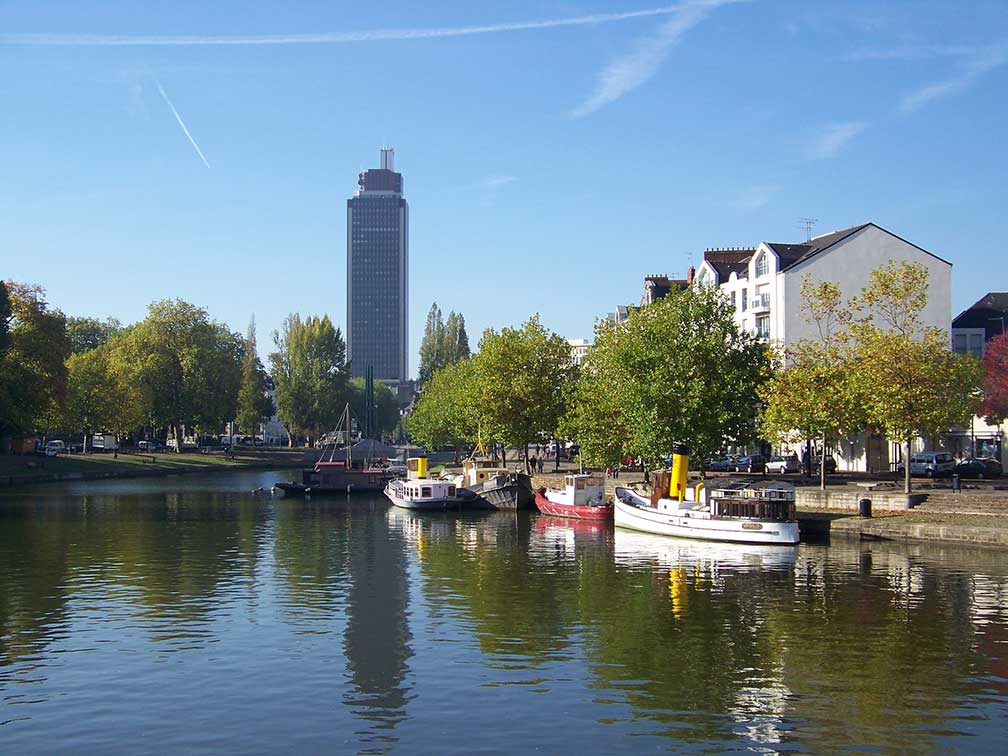 Nantes at Erdre river a right tributary to the Loire. In the center, the 144 m tall Tour Bretagne, the skyscraper, constructed in the 1970s, dominates Nantes' skyline.
Image: Guillaume Piolle

Nantes was a major commercial harbor, with facilities on River Loire in Quai de la Fosse at the west side of the Île de Nantes (Island of Nantes). Now, much of the commercial traffic has been relocated downstream to the area at Saint-Nazaire, about 60 km away from Nantes near the Atlantic coast.
Today Nantes' economy is based on service, more than a quarter of its workforce is employed by the public sector. Airbus Nantes employs approximately 2,400 people.

The city is a leader in business consulting, financial services, and auditing; it is by now the third most important financial center in France after Paris and Lyon.

Nantes has a population of about 285,000; the city is the center of a large metropolitan area with 873,000 residents. 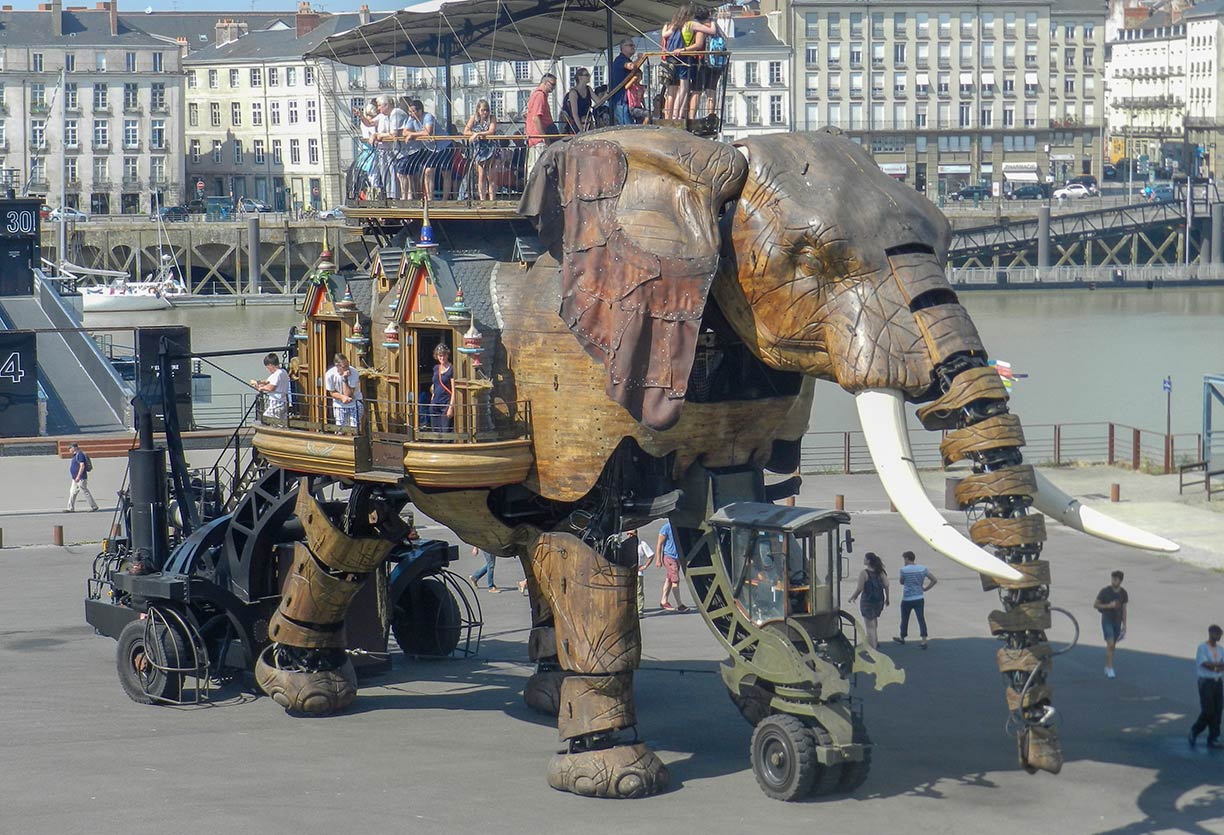 The Great Elephant at the Machines of the Isle; the 12 m tall beast of burden can carry fifty passengers.
Image: Waterced

Château des Ducs de Bretagne, the castle of the Dukes of Brittany is now home to the History Museum of Nantes.

La Cigale is a bourgeois Art nouveau brasserie with a history, the French restaurant opened in 1895.

Machines of the Isle

Les Machines de l’île is a cultural project with monumental mechanical structures, famous are the Great Elephant, the Marine Worlds Carrousel, and the Heron Tree.

Shopping:
Passage Pommeraye is a historical three levels shopping mall built from 1841 to 1843.

Museums:
The Jules Verne Museum (en-julesverne.nantesmetropole.fr) is a museum dedicated to the French writer Jules Verne, best known for his adventure novels like 'Around the World in Eighty Days.'
Musée d'arts de Nantes (museedartsdenantes.nantesmetropole.fr) is the Fine Arts Museum of Nantes; it is one of the largest museums in the region.
Musée Dobrée is a county museum in the Palais Dobrée in Nantes.
Natural History Museum (www.museum.nantes.fr) is a history museum with various collections of natural history on display, including zoological collections, regional wildlife, and mineralogy.

Churches:
Cathédrale Saint-Pierre-et-Saint-Paul is a Roman Catholic cathedral; its construction began in the 15th-century.
Notre-Dame de Bon-Port is a 19th century a Roman Catholic basilica, officially named Église de Saint-Louis.
Basilique Saint-Nicolas the neo-Gothic style church is one of three basilicas in the city, the others are the Basilica of St. Donatien and St. Rogatien, and Notre-Dame de Bon-Port.

Opera, Theater:
Théâtre Graslin (www.angers-nantes-opera.com) is an 18th-century theater and opera house used for opera and other performances.


The map shows a city map of Nantes with expressways, main roads, and streets, and the location of Nantes Atlantique Airport (IATA code: NTE) southwest of the city.