Satellite View and Map of the City of Lille, France

The building of the Préfecture de Lille houses a regional (Region Hauts-de-France) and a departmental prefecture.
Image: Velvet 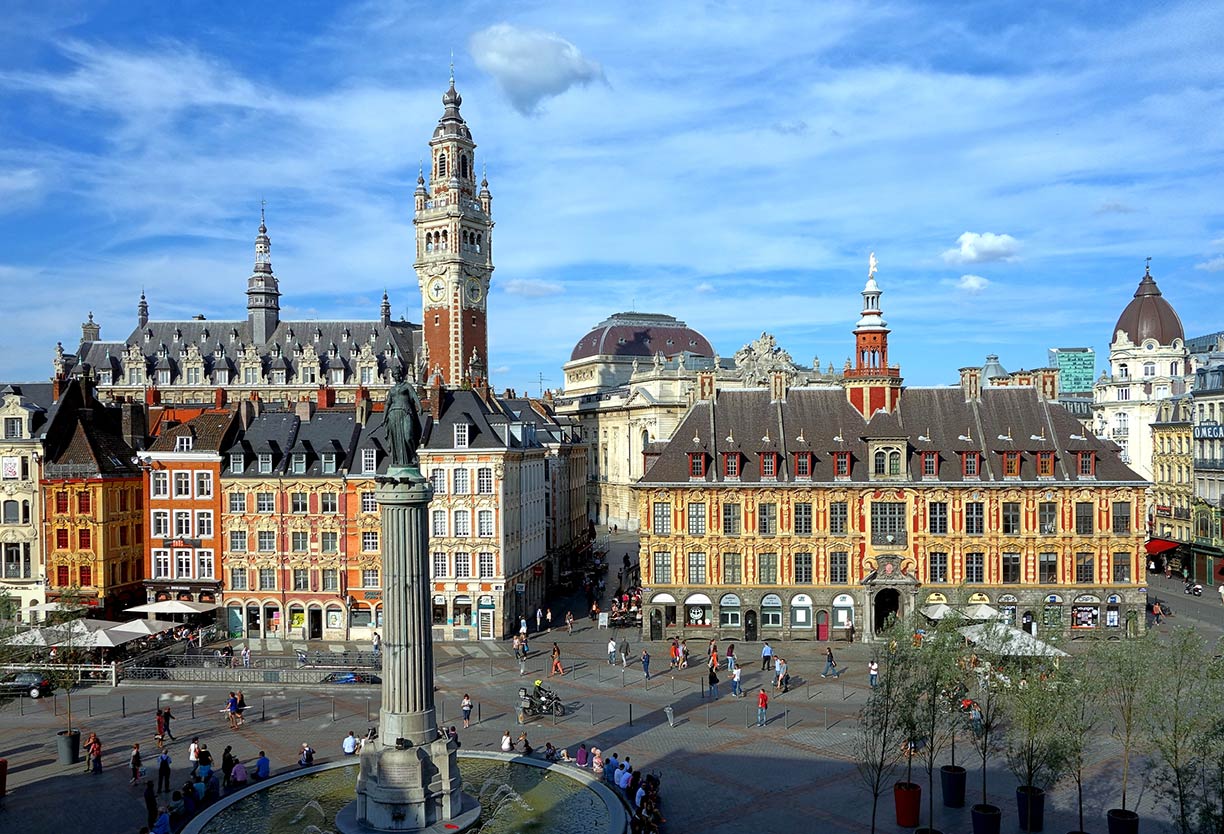 General de Gaulle square (Grand' Place) in Lille, with the Column of the Goddess (Colonne de la Déesse), the Old Stock Exchange (right) and the Belfry of the Lille chamber of commerce.
Image: Velvet


The map view shows Lille, a major river port and the tenth-largest city in

The capital of the Hauts-de-France region (Nord-Pas-de-Calais-Picardie) and the seat of the prefecture of Nord department is situated in French Flanders, on the Deûle River, close to France's border with Belgium, about 110 km (93 mi) west of Brussels in Belgium and about 220 km (136 mi) northeast of Paris.

In the 11th century, the town was fortified by Count Baldwin IV of Flanders, it became the medieval capital of Flanders, and in the 16th century, it was the residence of the Dukes of Burgundy. Claimed by Louis XIV in 1667; in 1708 it was captured by the Duke of Marlborough during the War of the Spanish Succession but was returned to France in 1713.

Today Lille is a major industrial and transportation center. The driverless Lille Metro, Europe's first automated rapid transit was opened in April 1983. In 1993, a high-speed TGV train line was opened, connecting Paris with Lille. The opening of the Channel Tunnel in 1994 and the arrival of the Eurostar train set Lille at the center of a rail triangle connecting Paris, London, and Brussels. 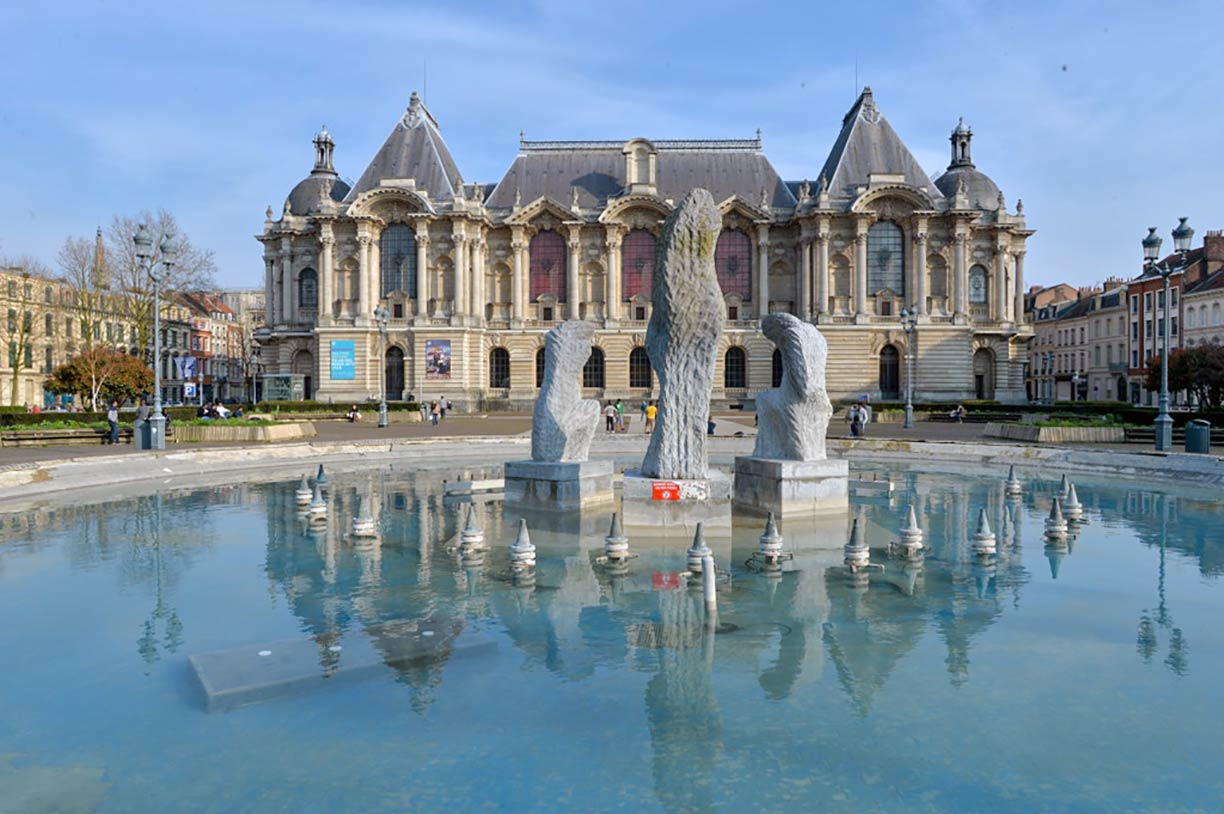 The Palais des Beaux-Arts in Lille is a museum for fine and modern art and antiquities. View of the museum from the fountain of the Place de la République.
Image: PBA Lille, Daniel Rapaich


The city has a population of about 233,000 residents (in 2016), more than 3.8 million people live in Lille's wider metropolitan area (in both France and Belgium), it is the fourth largest urban area (aire métropolitaine) in France. [1]

Lille is also a university city, the Université Lille Nord de France (www.cue-lillenorddefrance.fr) is a center for higher education and academic research, it runs several campuses in Lille, Calais, and Dunkirk; its main component is the University of Lille (www.univ-lille.fr), the largest French university.

Climate
The Hauts-de-France region has a temperate oceanic climate, mean summers are mediocre, and in winters temperatures can fall below freezing.

Places:
General de Gaulle square in Lille's Old Town. The Grand Place in the heart of the city is surrounded by old Flemish houses with bars, cafes, and bookshops, the Théâtre du Nord, and the Old Stock Exchange (Vieille Bourse), one of the city's significant landmarks.

Citadel of Lille, the star-shaped 17th-century citadel is known as the "Queen of Citadels," built on the frontier of France to Flanders (Spanish Netherlands), the bastion formed part of a double line of strongholds on France's northern border. Today it houses the headquarters of a multinational NATO rapid reaction force.

Opera, Theater:
Opéra de Lille (www.opera-lille.fr) is a neo-classical opera house for opera and ballet.
Théâtre du Nord (www.theatredunord.fr) a performing arts theater housed in an 18th-century former guardhouse at Grand Place.
Le Splendid (www.le-splendid.com) is a theater and event stage in an old neighborhood cinema of the 1950s.

Churches:
Basilica of Notre Dame de la Treille is a cathedral and basilica from the 19th century and a national monument of France.
Église Saint-Maurice is a 14th-century Gothic style church in the historic center of Lille.

In 2016 Lille was one of the host cities for the UEFA Euro 2016 football games, the venue for the event was the Stade Pierre-Mauroy, the stadium with 50,000 seats opened in August 2012; it is the new home of Le LOSC, Lille's Ligue 1 football club.


The map shows a city map of Lille with expressways, main roads, and streets, and the location of Lille Airport (IATA code: LIL) located about 10 km by road (via A1) southeast of the city.