Behind the Third Bosporus Bridge, the Bosporus Strait opens into the Black Sea. The Bosphorus Strait is the only outlet and the most important connection of the Black Sea (via the Mediterranean Sea) to the world's oceans, and thus the access of the adjacent countries to international maritime trade. The Bosporus strait is the narrowest natural waterway in the world for international shipping.
Image: Koraysa - Adobe Stock 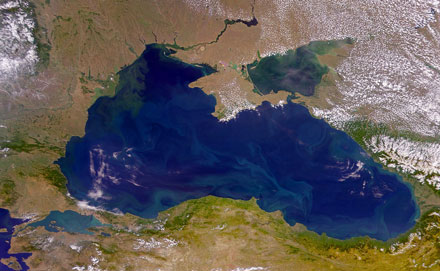 The map shows the Black Sea, an inland sea between Eastern Europe and Western Asia. It is bounded by the Eastern European Plain to the north, the Balkans to the west, the Caucasus Mountains to the east, and the Anatolian Peninsula (or Asia Minor, the largest part of Turkey) to the south.


There are six countries with coastlines on the Black Sea (clockwise), Ukraine, Russia, Georgia, Turkey (Türkiye), Bulgaria, and Romania.


The Black Sea (without the Sea of Azov) has a surface area of 436,400 km², which is somewhat larger than Germany or slightly larger than the US state of California.

An estimated 16 to 17 million people live in the coastal regions of the Black Sea. 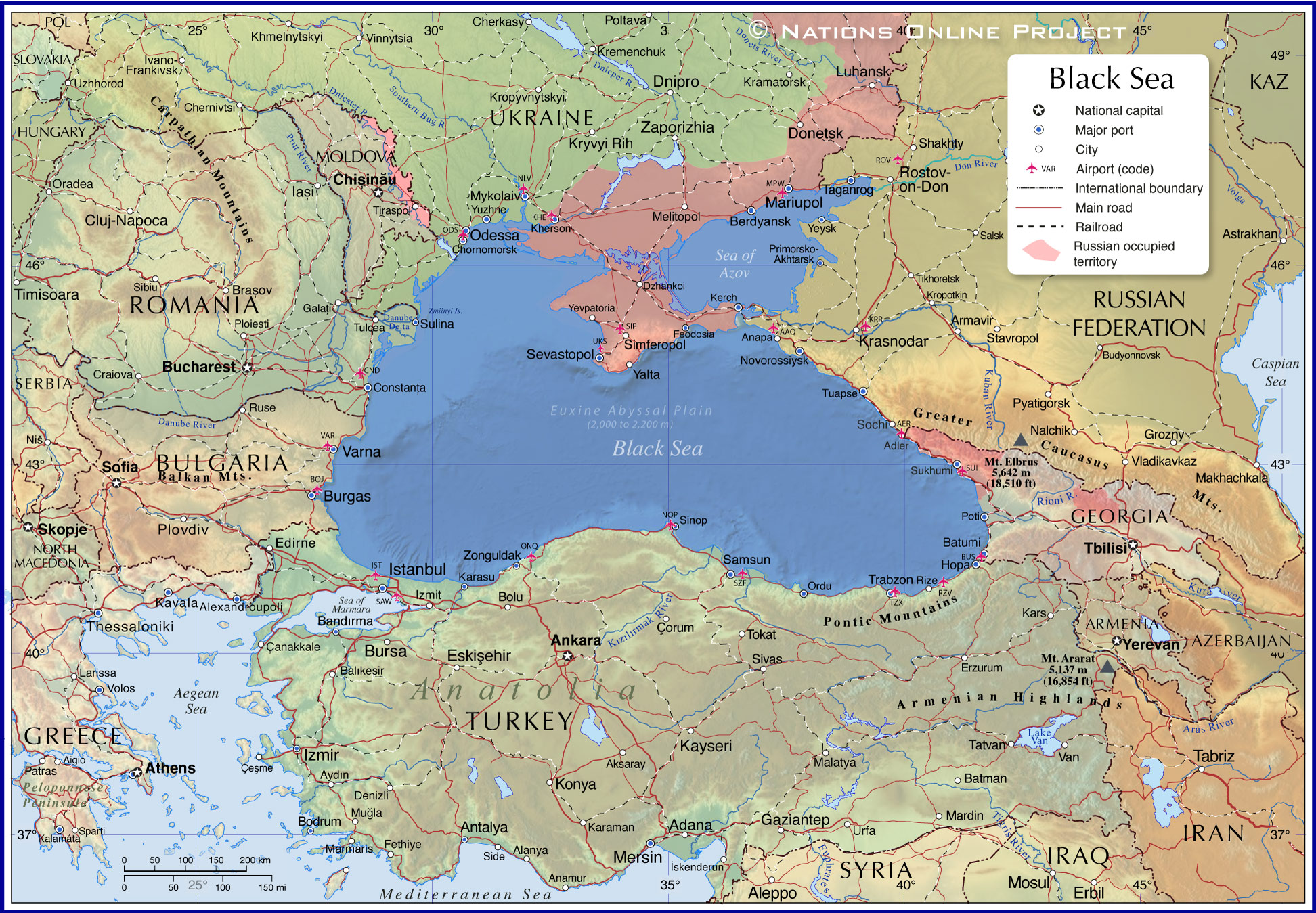 Detailed Map of the Black Sea


More about the Black Sea 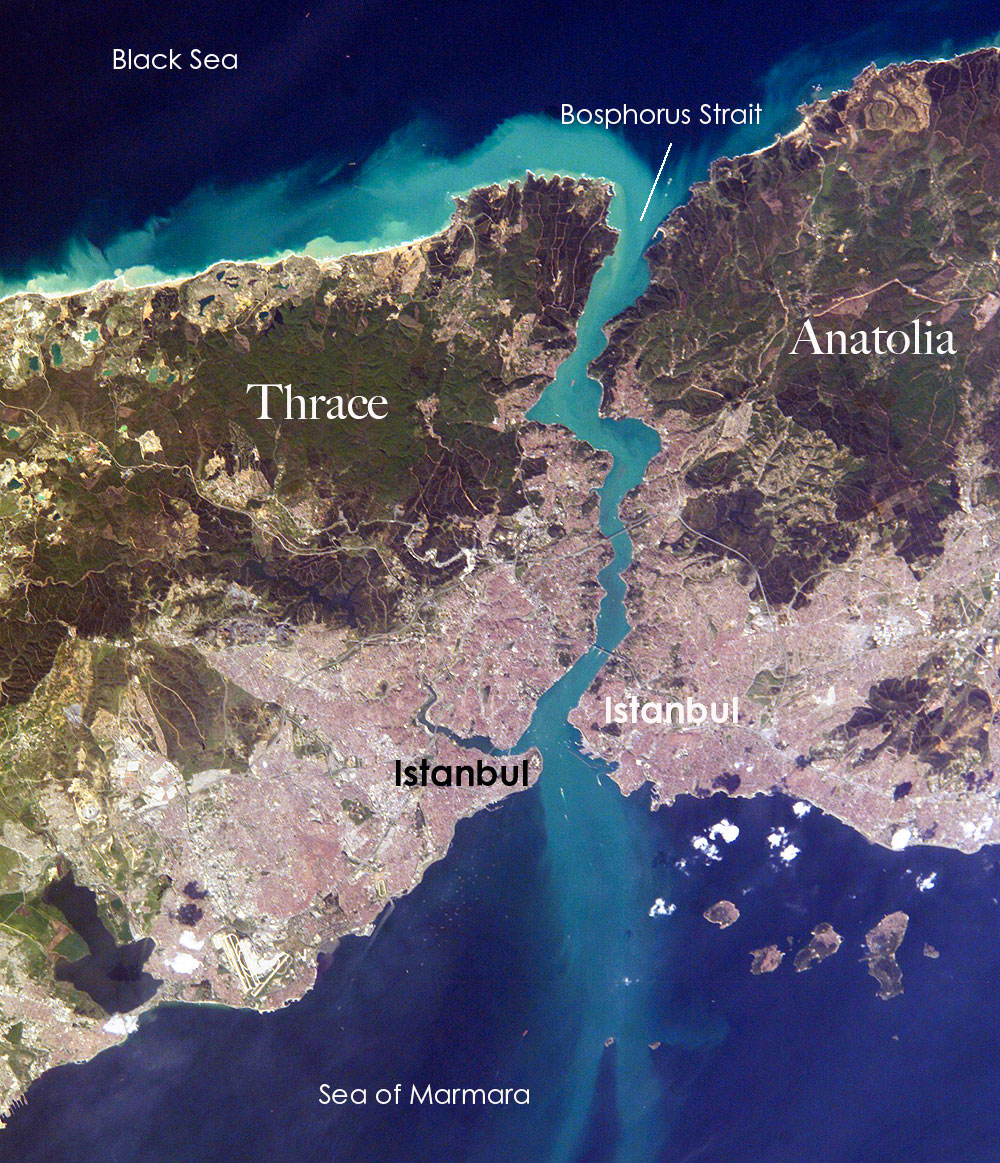 Istanbul, Turkey's metropolis of more than 15 million, lies on both sides of the winding, 30-kilometer-long Bosphorus Strait, which connects the Mediterranean Sea via the Sea of Marmara (south) with the Black Sea (north). The Bosphorus Strait separates Europe (Thrace, left) from Asia (Anatolia, right). Three bridges, a road tunnel, the Eurasia Tunnel under the Bosporus and several ferry connections link Turkish Thrace with the Anatolian peninsula.
Photo: ISS NASA


Earth's mountain-building machinery formed the Black Sea basin several million years ago. Large-scale movements of the Earth's crust uplifted the mountain ranges that divided the ancient Tethys Ocean into several water basins, such as the Paratethys Ocean. The megalake of the late Miocene was probably the largest lake in Earth's history and extended from the region east of the Alps across Central Europe to Central Asia. Its remnants include the Black Sea, the Sea of Azov, the Caspian Sea and the Aral Sea. [1] [2] [3]


During the last great ice age, which ended about 25,000 years ago, the Black Sea was a large freshwater lake. The Bosphorus, the connection to the Mediterranean Sea - and to saline water - was presumably formed about 6,500 to 7,500 years ago. [4]


Noah's Flood
It has been speculated that events in the Black Sea 7,500 years ago provide the background for the myth of Noah's Flood and the surviving Babylonian flood myths (Gilgamesh flood myth). The Black Sea deluge hypothesis proposed a catastrophic inflow of seawater from the Mediterranean Sea into the freshwater of the Black Sea after the last ice age. [5] [6] [7]

Mount Ararat, traditionally associated with the mountain where Noah's Ark came to rest at the end of the Flood, is located 300 km (200 mi) inland from Turkey's Black Sea coast near the border with Armenia.


The Argonauts
The utterly inhospitable sea (Póntos Áxeinos) was the scene of the quest for the Golden Fleece by a band of fifty mortals and demigods, including Hercules, two seers and a sorceress.
The fearless Greek superheroes, the Argonauts, had the task of bringing home the precious hide of a ram from the world's end. At that time, the end of the world was somewhere in the Caucasus (Colchis). [8]


Ancient Silk Road
When Marco Polo traveled the Silk Road in the 13th century, the trade route had already existed for more than a thousand years. Marco Polo used the Black Sea route on his return trip from China to visit Constantinople (now Istanbul). [9]

The maritime city-state of Genoa (Liguria, Italy) had started to form colonies of Ligurians in the Eastern Mediterranean and the Black Sea in the second half of the 13th century. [10] 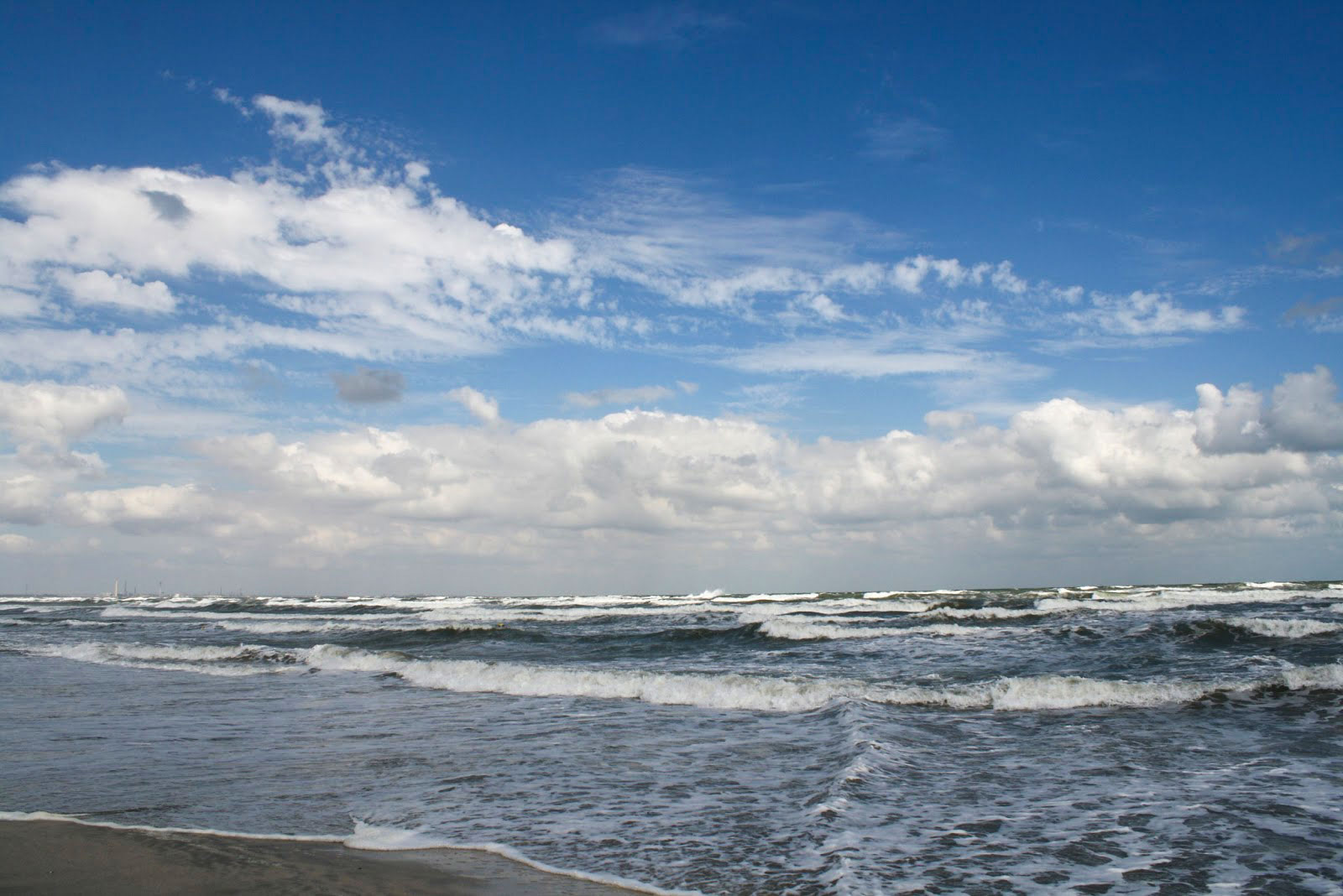 
Unique features of the Black Sea


Geographical features of the Black Sea 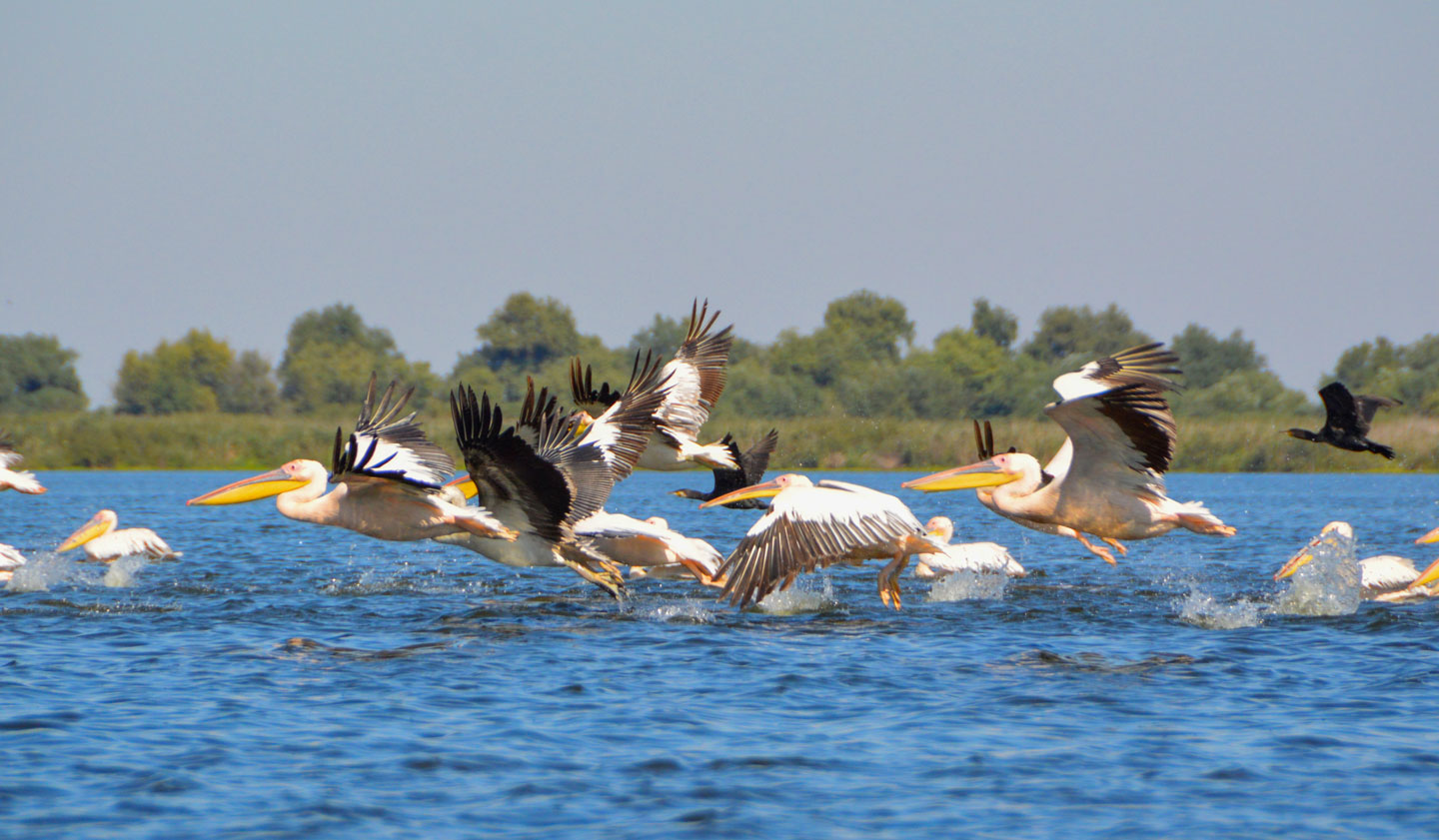 Pelicans in the Danube Delta in Romania. The largest and best preserved of Europe's deltas is a UNESCO World Heritage Site.
Image: Alex Keshavjee

The Black Sea lies at the crossroads between Europe and Asia, bounded by the relatively flat Eastern Balkans to the west, the East European Plain (Russian Plain) to the north and northwest, the mountainous Caucasus to the east, and the Anatolian Peninsula, also known as Asia Minor, to the south.


From West to East, from the Bulgarian beaches near Burgas to the coast of Georgia, which is about the widest part of the Black Sea, it is 1,150 km (720 miles).
The distance from the Ukrainian port city of Odesa to the Bosphorus Strait in the south is about 600 km (370 mi). The distance from the southern tip of Crimea to the coast of Kastamonu province (Turkey) is 265 km (165 miles).


One of the major geographical features of the Black Sea is the Crimean Peninsula, which would almost be an island if it were not connected to the mainland by the narrow Isthmus of Perekop. At 27,000 km², Crimea is about the size of Massachusetts or slightly larger than the state of Israel. 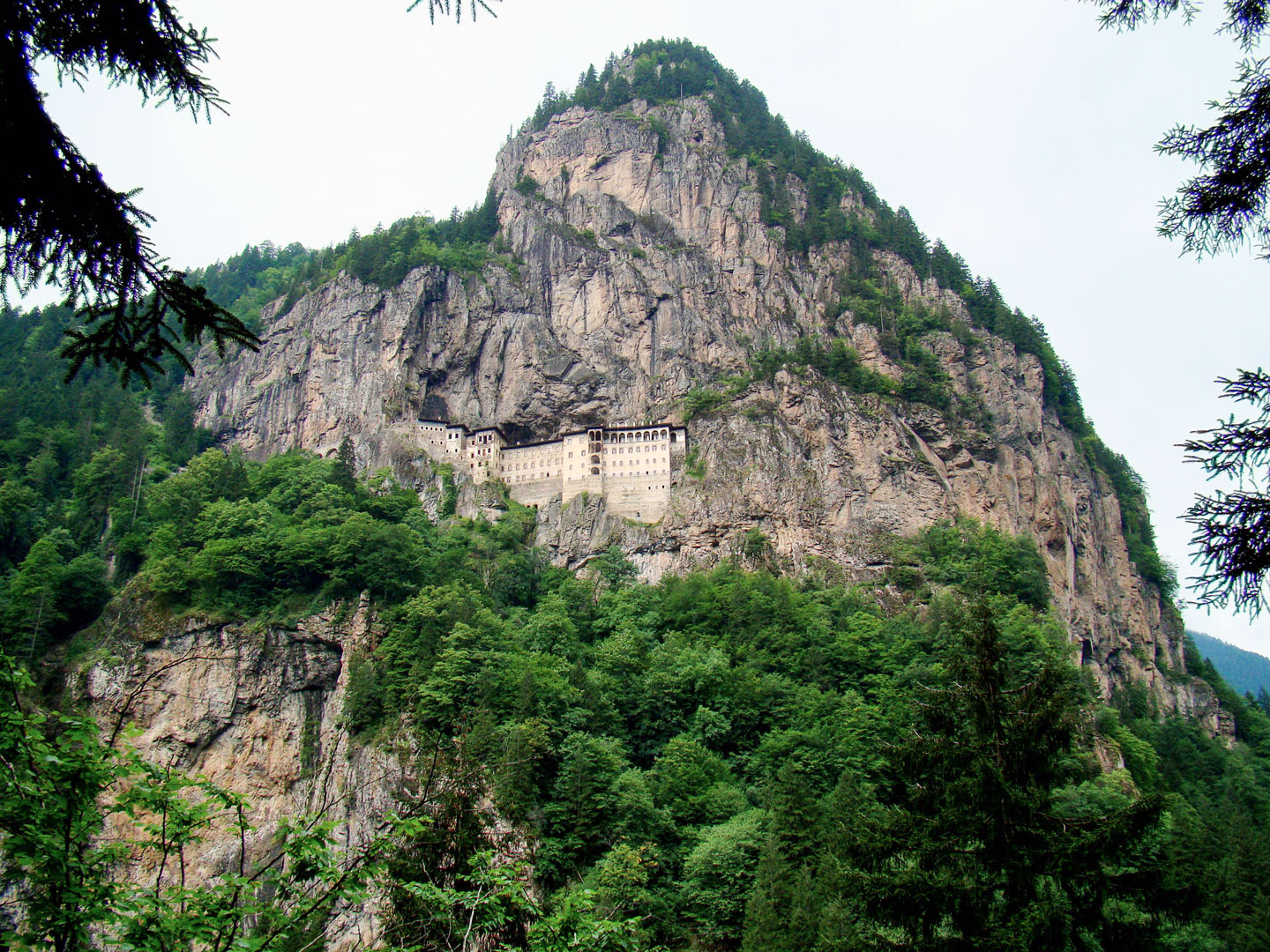 Sumela Monastery, a former Greek Orthodox monastery from the Byzantine period, was built on a rocky outcrop in a cliff in the eastern part of the Pontic Mountains, about 50 km south of the port city of Trabzon, Turkey.
Image: Bjørn Christian Tørrissen


Rivers
The Black Sea receives water from a 2-million-square-kilometer drainage basin that covers about one-third of the area of mainland Europe. [UN Atlas]

Several large rivers flow into the Black Sea, such as the Danube, the Dnieper, the Dniester, the Southern Bug, the Russian Don and the Kuban rivers, Western Georgia's Rioni river, and the Turkish Kızılırmak and Sakarya rivers.

A system of inland waterways, the Unified Deep Water System of European Russia (UDWS), connects the Black Sea with the Caspian Sea, the Baltic Sea and the White Sea. [WP]
The Black Sea is connected to the North Sea via the Danube and the Rhine-Main-Danube Canal.


Islands
In proportion to its size, the Black Sea is sparsely endowed with islands and archipelagos. There are about ten small islands; the most famous today is Snake Island (Zmiinyi Island), located 35 km off the coast of southeastern Ukraine.

The highest mountains are Mount Kaçkar at 3,937 m in the Pontic Alps, Mount Ararat at 5,137 m, a dormant volcano in the Armenian highlands, and Mount Elbrus in the Caucasus Mountains at 5,642 m, the highest and most prominent peak in Russia and Europe. 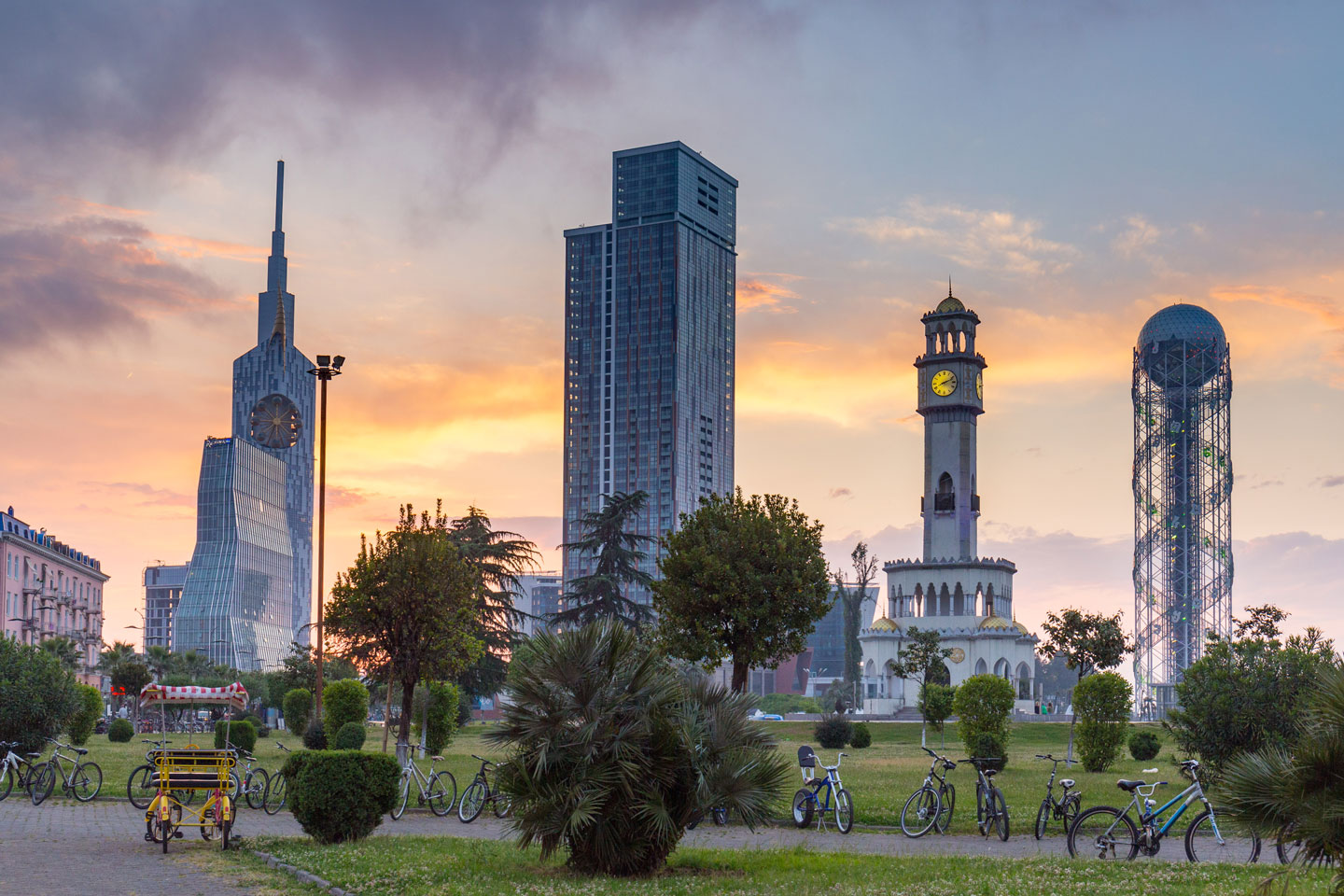 The coastal city of Batumi is an important port, the second largest city in Georgia and the capital of the Autonomous Republic of Adjara on the Black Sea coast. The wild architecture of Batumi Miracle Park is a legacy of former president Mikheil Saakashvili.
(From l. to r.) Radisson Blu hotel in front of the Batumi Technological University Tower, Batumi's Trump tower (Porta Tower), Chacha Clock Tower and the Alphabetic tower with the DNA design on the right.
Image: Bjørn Christian Tørrissen

On the west coast is the port city of Constanța, the largest port in Romania and the largest seaport on the Black Sea.

Chornomorsk, a port with a town southwest of Odesa, Ukraine, is the target of Russian efforts to gain control of the Black Sea and turn Ukraine into a landlocked country without access to the world's oceans.

The port of Mariupol in Taganrog Bay, the northeastern arm of the Sea of Azov, is occupied by Russian forces. Russian shelling has destroyed large parts of the city and killed thousands of civilians. [18]

Sevastopol is the largest city in Russian-occupied Crimea and an important port on the Black Sea.

The Russian Port of Novorossiysk maintains a timber port, a shipyard, and an oil terminal; it provides grain handling facilities and is home to a Russian naval base.

On the southeast coast of the Black Sea lies the seaport of Batumi, Georgia's largest container, cargo and ferry port. 70 km to the north of Batumi lies Poti, a major port city and industrial center and home to the coast guard of Georgia.


Trans-European Transport Network
The ports of Sulina, Constanta and Burgas, are destinations on the Black Sea coast for corridors of the TEN-T Core Network, a proposed transport network of the Trans-European Transport Network (TEN-T) that will eventually connect all Member States through various transport modes such as roads, railways, airports and water infrastructure in the European Union. [TEN-T] 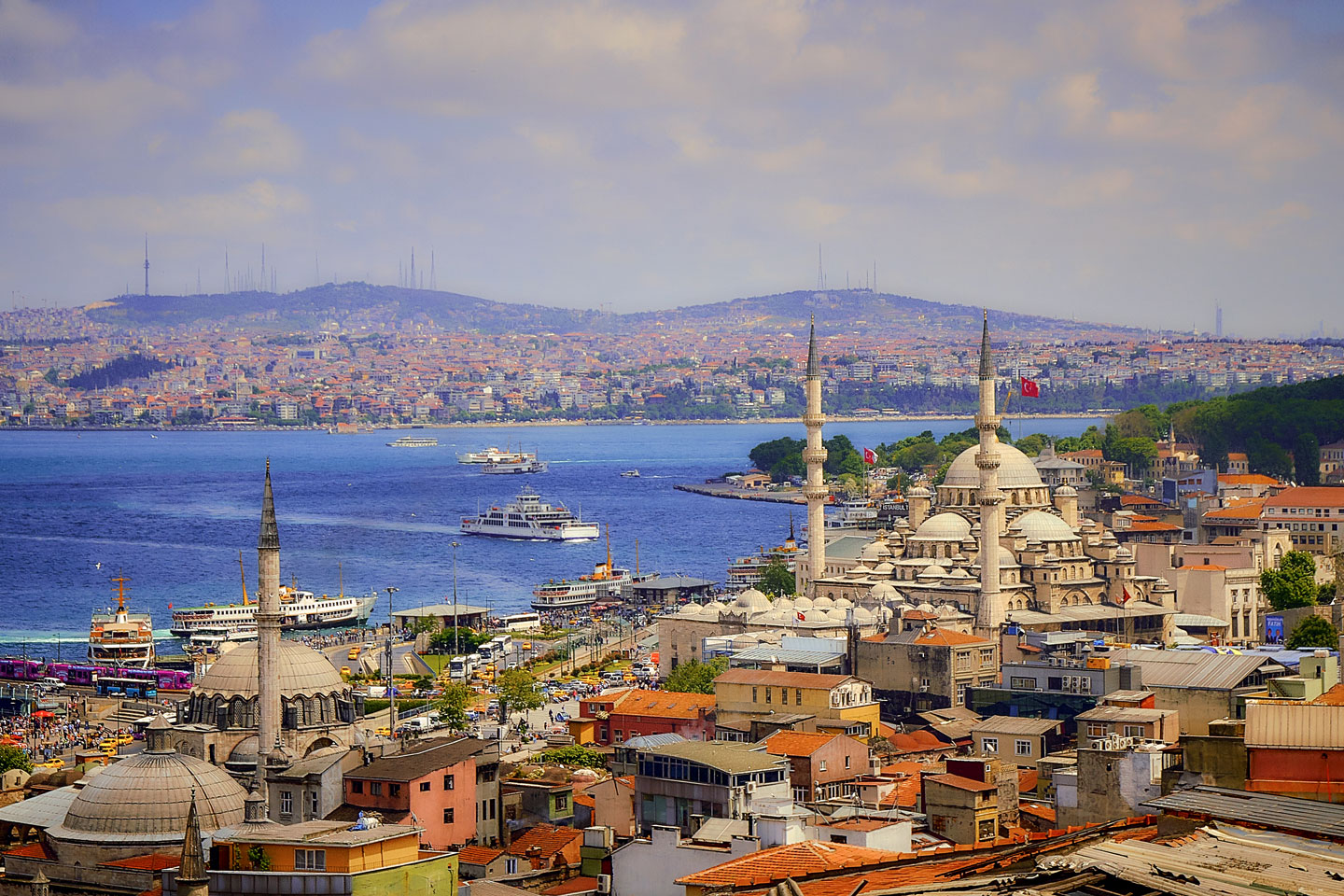 Istanbul on the Bosphorus Strait with the Yeni Cami or New Mosque, one of more than 3,000 mosques in the city, on the right.
Photo: Pedro Szekely


Cities
Important cities along the coast include

Istanbul, Turkey's principal seaport and largest city, was formerly known as Constantinople and ancient Byzantium. The metropolis is situated on both sides of the Bosphorus Strait, the waterway connecting the Black Sea with the Sea of Marmara and separating European Eastern Thrace from the Anatolian peninsula of Western Asia.

Rostov-on-Don (on the Don River), one of the largest cities in the European part of the Russian Federation, is located in the south of the country, about 38 km (24 mi) from the mouth of the Don River into the Sea of Azov.

Odesa (Odessa), a port and Ukraine's third most populous city on the southwestern coast of the country.

Varna is a port city and resort in eastern Bulgaria, on the western coast of the Black Sea; it is the third largest city in the country.


Danube Delta
The Danube is Europe's second longest river, which flows, after a 2,850 km long journey, into the Black Sea. At the end of its journey, the river forms the Danube Delta, the largest and best-preserved delta area in Europe.


Western Caucasus
The Western Caucasus, the western region of the Caucasus in southern Russia, stretches from the Black Sea to Mt. Elbrus. It is one of the few large mountainous regions in Europe that has been largely spared from human intervention.


Historical cities and towns on the Black Sea


The Georgian port city of Batumi is located on the site of the ancient Greek colony of "Bathus" in Colchis.

Feodosia, a port and resort on the Crimean coast, was founded in the 6th century BC by Greek colonists as Theodosia (Θεοδοσία).

Nesebar on the Bulgarian Black Sea coast is an ancient city with 3,000 years of history, a major tourist attraction and now a World Heritage Site.

Sinop (Sinope), a town on the isthmus of Cape Ince (Turkey), inhabited probably since the late Stone Age, was the birthplace of the famous Greek philosopher Diogenes.

Sochi, the former capital of Circassia, is the largest resort in Russia and became world famous thanks to the XXII Winter Olympics in 2014.

Samsun, a major Black Sea port and former Greek settlement is best known as the place where Mustafa Kemal Atatürk began the Turkish War of Independence in 1919.

Trabzon, a city on the Black Sea coast in northeastern Turkey, was a trading center on a branch of the historic Silk Road. The ancient trading center between Persia and Constantinople was a melting pot of cultures, languages and religions for centuries.

Yalta, a resort city on the south coast of the Crimean Peninsula, became famous when the city held the Yalta Conference as part of the Allied World War II conferences in 1945.

More maps of the Mediterranean region and the Middle East

Map of Sinai Peninsula
Map of the Asian part of Egypt.


Countries on the Black Sea