Sunrise at Stonehenge on the summer solstice.
Image: Andrew Dunn


Annotated satellite view of Stonehenge, the Neolithic monument on Salisbury Plain in the English county of Wiltshire, about 13 km (8 mi) north of the city of Salisbury. Stonehenge is one of the most famous prehistoric sites and among the most visited monuments in the world. Archaeologists believe that the sanctuary was built from 3000 BC to 2000 BC.


Main features of Stonehenge on the map are:

The Stone Circles of Stonehenge. 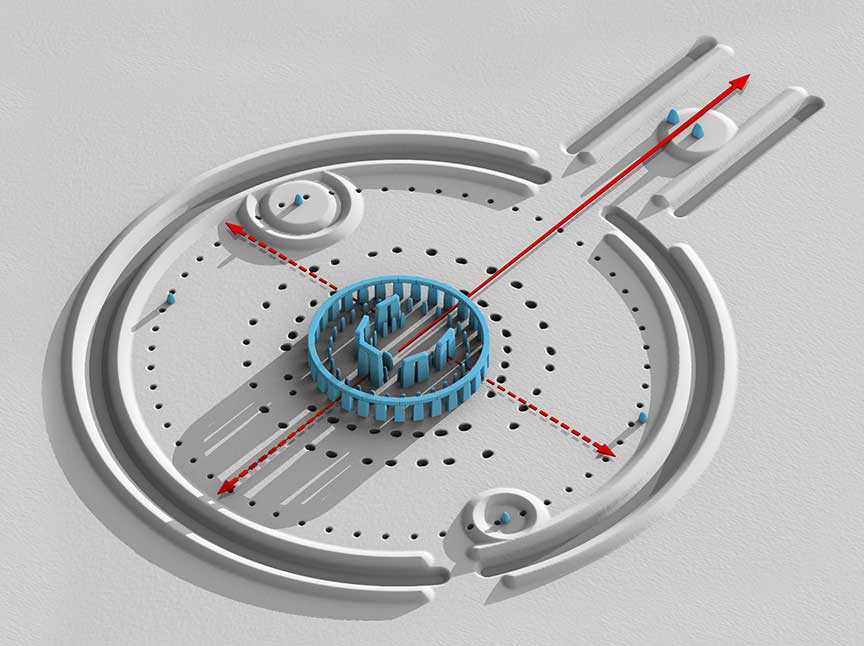 There are traces of stone circle constructions across the British Isles and Brittany (today NW France) dating back to the Late Neolithic and Early Bronze Age. More than 1000 surviving examples are known, among the most famous are the henge monument in Avebury, the Ring of Brodgar on the Orkney Islands of Scotland, and Stonehenge. [1]

The main sanctuary of Stonehenge consists of circles of menhirs, tall standing stones, arranged in a pattern whose astronomical significance is still explored by researchers. New archaeological evidence indicates that Stonehenge might have served as a center of healing, other theories propose that it was a burial ground and, or a place to worship ancestors.
Anyhow, the people who built Stonehenge must have been of the opinion that the stones and the location harbor great powers; otherwise they wouldn't have carried the stones, the largest weighs as much as 50 tons, over 240 km (150 miles) to the place where the stone circles were constructed.


The Avenue
The ancient Avenue on Salisbury plain (yellow line on the map) was built during the Stonehenge III period (2600 to 1700 BCE). The 12 m (40 ft) wide path connected Stonehenge's main compound with a potentially significant location at the River Avon. 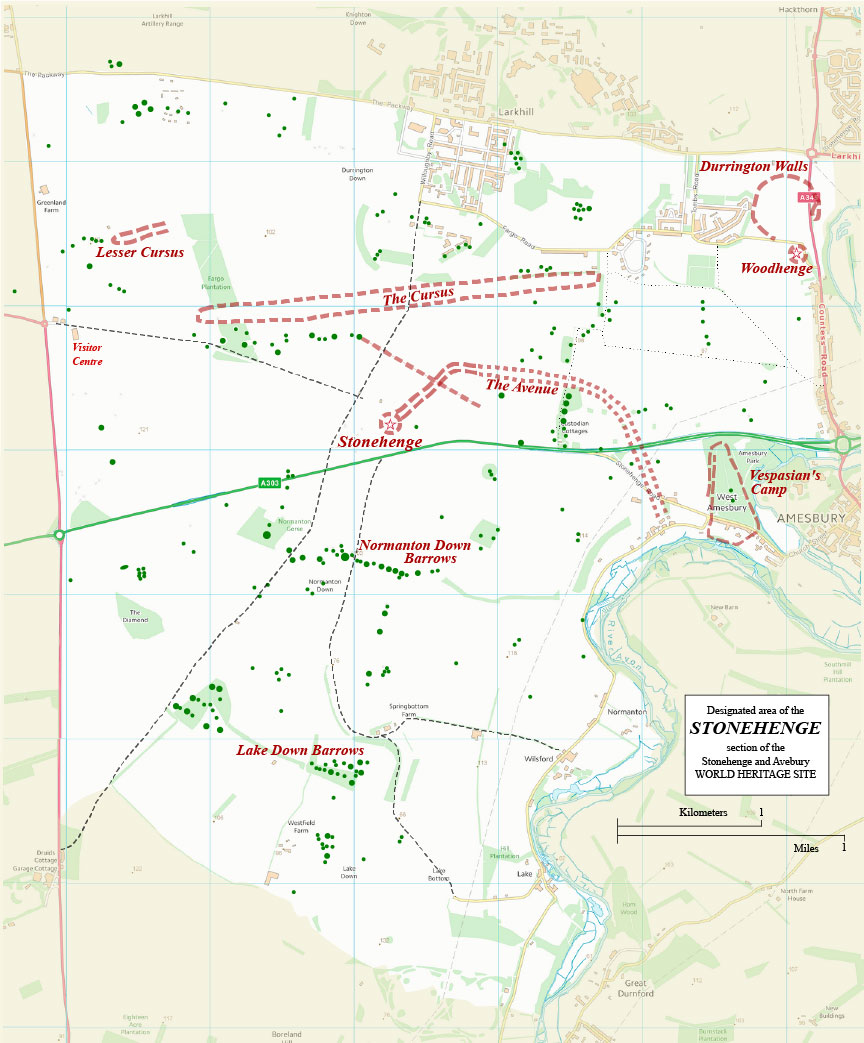 Boundary and key sites on the Avebury section of the Stonehenge.
Image: © Ordnance Survey data

The 2.8 km long and about 100 m to 150 m wide Neolithic 'racecourse' is several hundred years older than the stone circles of Stonehenge. There have been assumptions that the cursus was in use for rituals connected with ancestor worship, or that the course follows astronomical alignments, or that it served as buffer zones between ceremonial and occupation landscapes. But there is some evidence that the 'stadium' was actually the location for a kind of Neolithic Olympic Games.


Woodhenge
Woodhenge was a timber circle monument, probably built about 2300 BC, a sort of a human-made forest, surrounded by a ditch. The site consisted of six concentric oval rings of wooden piles; the outermost ring was about 40 m wide. The remains of the structure are located 3 km north-east of Stonehenge at the edge of the Durrington Walls.


Durrington Walls.
Durrington Walls is another mystery 3 km north-east of Stonehenge. It is the largest henge ever discovered, measuring nearly 500 m in diameter. The oval-shaped henge had four entrances; it is possibly the site of a village where the builders of Stonehenge lived.
According to UK's National Trust, Durrington Walls was a place where people lived for part of the year and held feasts and rituals. Most of the activity at this place happened 4,500 years ago, long before the henge was built. [2]


Vespasian's Camp
Vespasian's Camp is a 2,500-year-old hillfort, a type of earthworks used to fortify a settlement. Findings of Mesolithic stone tools suggest that this place is much older than the Roman conquest of Britain (43–84 AD). [3]

More unknown archaeological monuments hidden in the Stonehenge landscape have been discovered recently by archaeologists of the "Stonehenge Hidden Landscape Project." In 2014 the University of Birmingham announced findings including evidence of adjacent stone and wooden structures and burial mounds, overlooked previously, that may date as far back as 4,000 BC.

More about the United Kingdom:

Detailed map of the United Kingdom

Searchable map of the United Kingdom