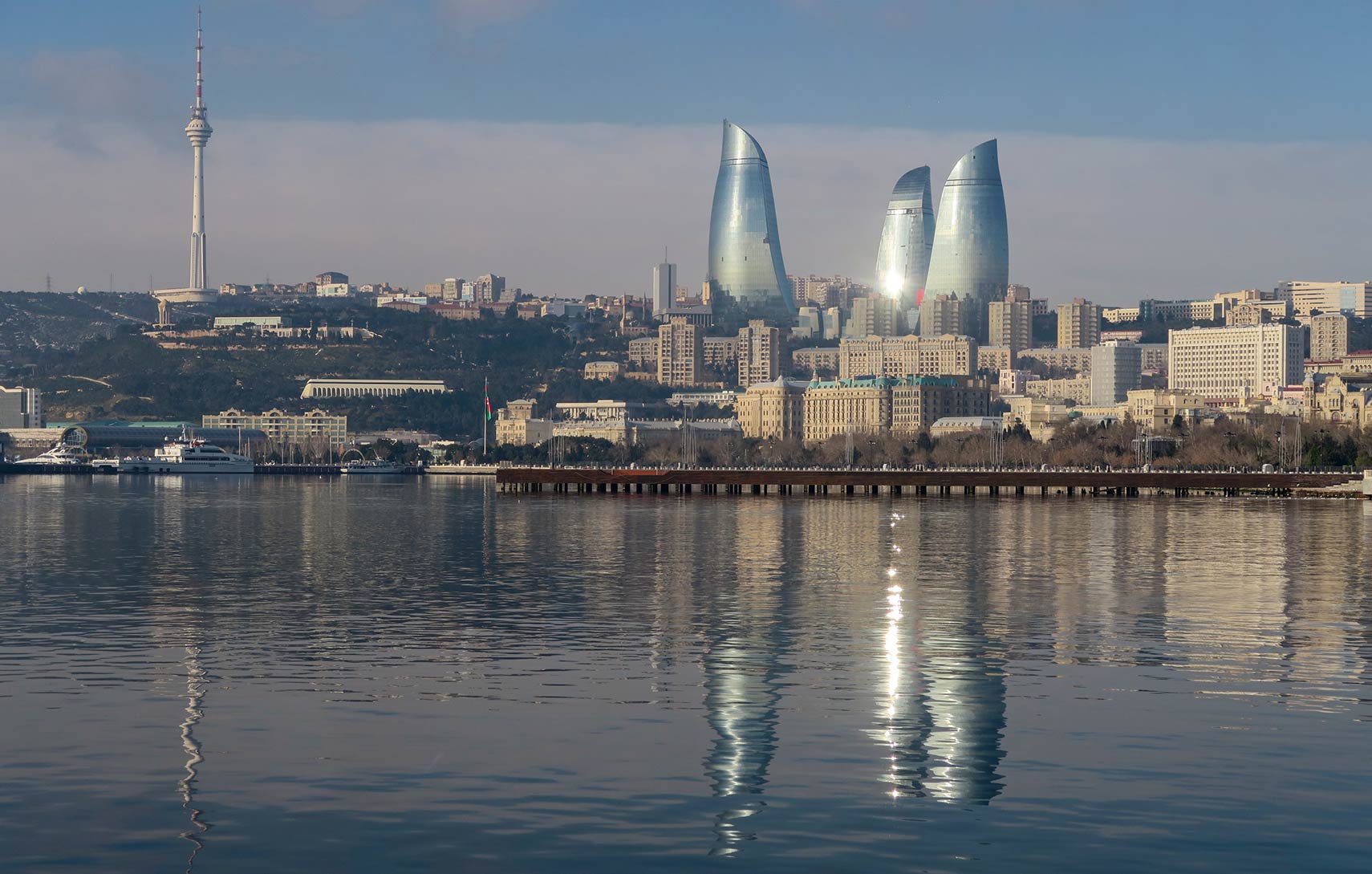 Panorama of Baku, Azerbaijan's capital on the Caspian Sea with a population of 2.3 million people. It is an industrial port and a center of the oil industry. The image shows the city's famous Flame Towers in center-right and the Baku TV Tower in the background (left).
Image: Sek Keung Lo

The map shows Azerbaijan, a country in the Caucasus (Transcaucasia) region on the western shore of the Caspian Sea. Azerbaijan lies at the crossroads of Eastern Europe and Western Asia and borders Armenia, Georgia, Iran, Russia, and via the exclave of Nakhichevan, which is separated from the Azerbaijani heartland by an Armenian land corridor, to Turkey.

The former Soviet republic gained independence in 1991 and is now officially the Republic of Azerbaijan.
The country occupies an area of 86,600 km² (33,440 sq mi), including the exclave of the Nakhchivan Autonomous Republic and the disputed Nagorno-Karabakh region. In comparison, the country is slightly larger than Austria or somewhat smaller than the U.S. state of Maine.

Azerbaijan's territory includes the exclave of the Autonomous Republic of Nakhichevan, which is separated from the mainland by a 35 km wide Armenian land corridor.

Internationally recognized as part of Azerbaijan is the former autonomous region of Nagorno-Karabakh, which is now ruled by the larger Republic of Artsakh, a de facto independent state with a predominantly Armenian population. The region is disputed between Armenia and Azerbaijan, and the Nagorno-Karabakh conflict is still ongoing. 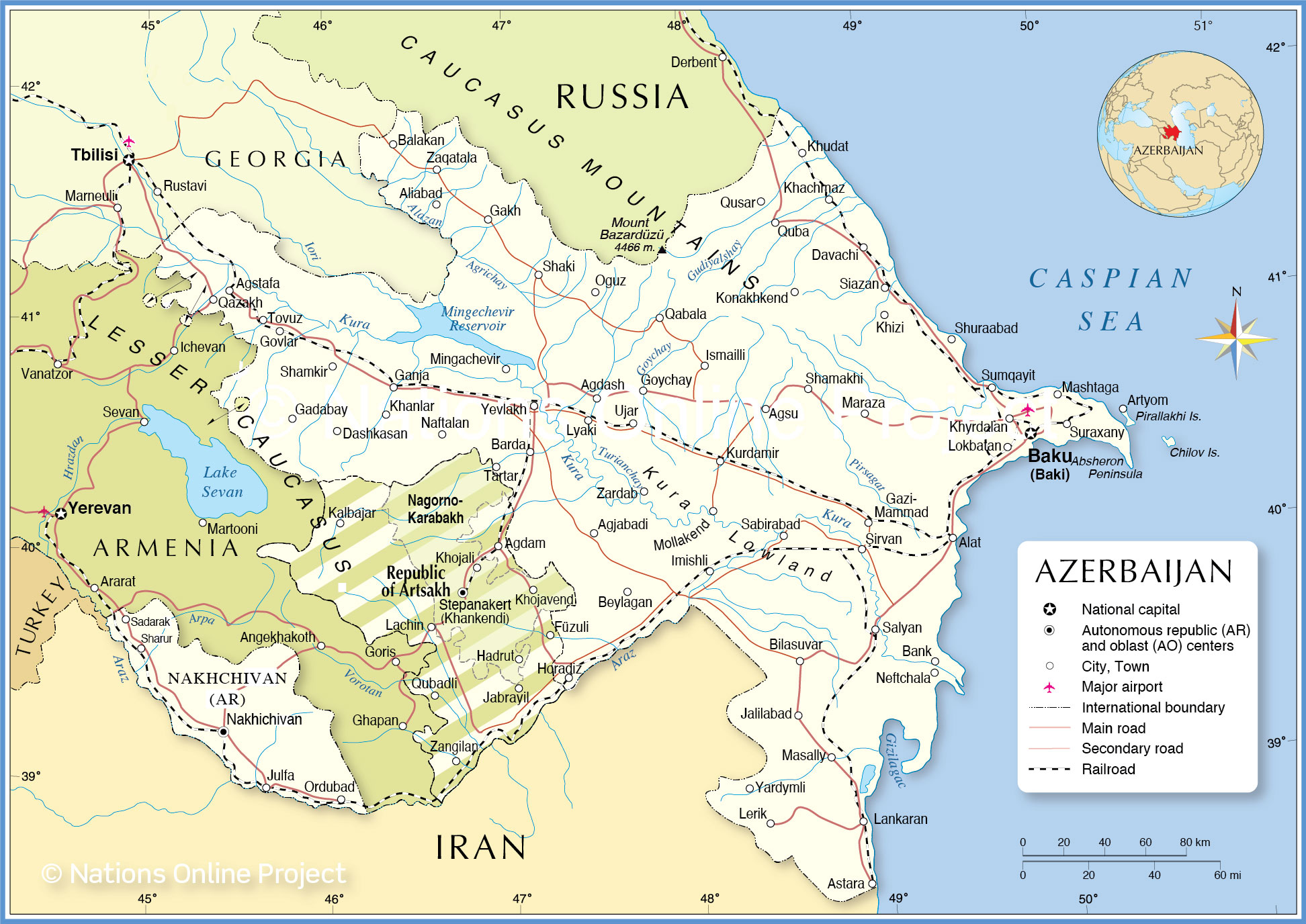 The map shows Azerbaijan and surrounding countries with international borders, the national capital Baku, the Nakhchivan Autonomous Republic, the location and boundary of the former Nagorno-Karabakh Autonomous Oblast, the Republic of Artsakh, major cities, main roads, railroads, and major airports. 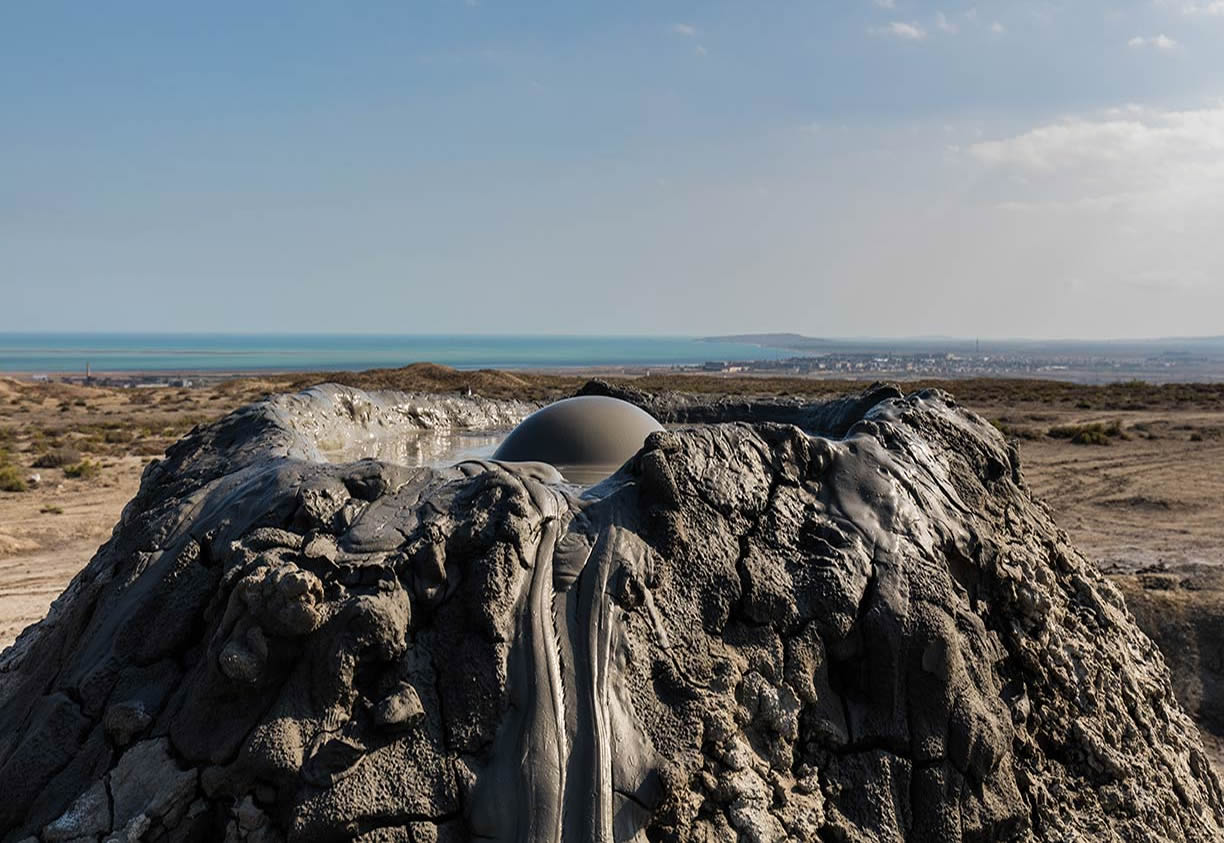 A mud volcano (yanardagh: burning mountain) in Qobutan National Reserve of Azerbaijan. Azerbaijan has the most mud volcanoes in the world with about 300 pieces.
Photo: Diego Delso

Population
Azerbaijan has a population of 10 million people (in 2020). The capital and largest city is Baku. Other major cities are Ganja, Sumqayit, and Mingachevir. Spoken languages are Azerbaijani (Russian and English as second or third languages). The main religion is Islam; about 90% of the population are Muslims.

Climate
Azerbaijan's climate zones range from arid subtropical to the mountainous tundra. The country is part of an ecoregion encompassing Georgia and Armenia.

Highest Peak
With 4,466 m (14,652 ft), Mount Bazardüzü (or Bazarduzu Dagi, Kiche suv) in the Greater Caucasus range on the border between Russia and Azerbaijan, is the highest peak in Azerbaijan.

Rivers
The country's main rivers are Kura (Kur) with a length of 1,515 km, it empties into the Caspian Sea, and Aras River, a 1,072 km long tributary of the Kura.

The map shows the location of the following cities, towns:

Cities and Towns in Azerbaijan

Satellite View and Map of Azerbaijan

Map of the Caspian Sea